View all travel news
Top Destinations
Top CitiesView All Destinations
Trending Regions
Trending Cities
Load More
Brussels has proclaimed itself “the comic book capital of the world.” I haven’t been all over the world, but I can say that I have never seen a city that celebrates comic books more than Brussels.

WITH OVER 700 comic book authors in Belgium, the country has the slightly odd but still impressive distinction of having the most comic book authors per square mile in the world. Internationally known comic characters like the Smurfs and Tintin started in Belgium, and Brussels has a handful of new and used comic book shops, a Tintin boutique store, the Belgian Comic Strip Center with exhibits on the history of the art form, the Marc Sleen museum with exhibits of the work of the “living legend of Belgian Comic Strip Art in Flemish,” and over 40 comic book murals scattered throughout the city.

I love how the murals connect to the history and culture of the city as well as adding some whimsy to wandering through the streets. I went on a walking tour of the city to track down as many of the comic walls as I could in 2 hours (with a few side stops to see the Grand Place and the Manneken Pis). I made it to these 12.

All photos by the author. Trip was sponsored by VisitFlanders. 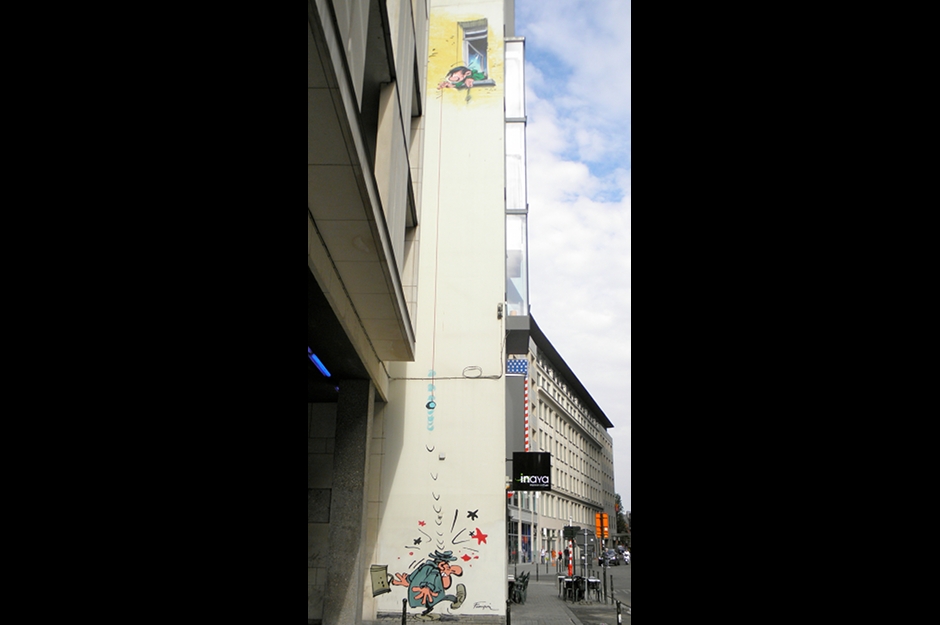 Gaston Lagaffe showed up as a creation of André Franquin in Spirou the famous Belgian comic magazine in 1957, and in honor of his 50th birthday, the city offered the comic book hero a fresco space. Gaston (whose last name means "the blunder" in French) is playing with the yo-yo, and it's the unfortunate Monsieur De Mesmaecker getting hit in the head. 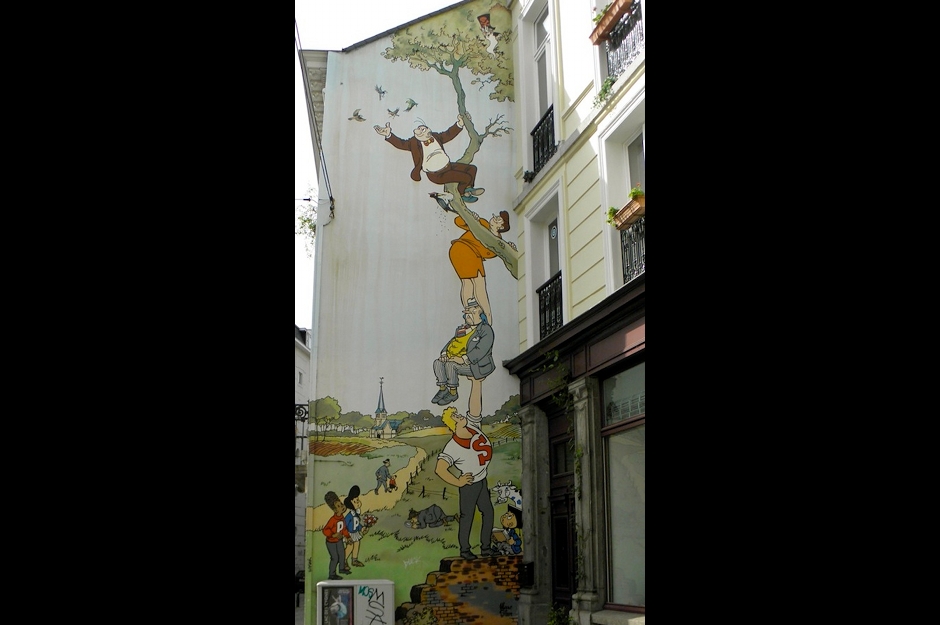 Nero from The Adventures of Nero by Marc Sleen is the man feeding the birds. He's being help up by Jan Spier (Spier means muscle in Dutch) along with Mr. and Mrs. Pipe. The comic strip is Flemish because the focus of the strip is family as compared to The Adventures of Tintin, which is more about the individual. Sleen drew the Nero comic strip by himself from 1947 to 1992. 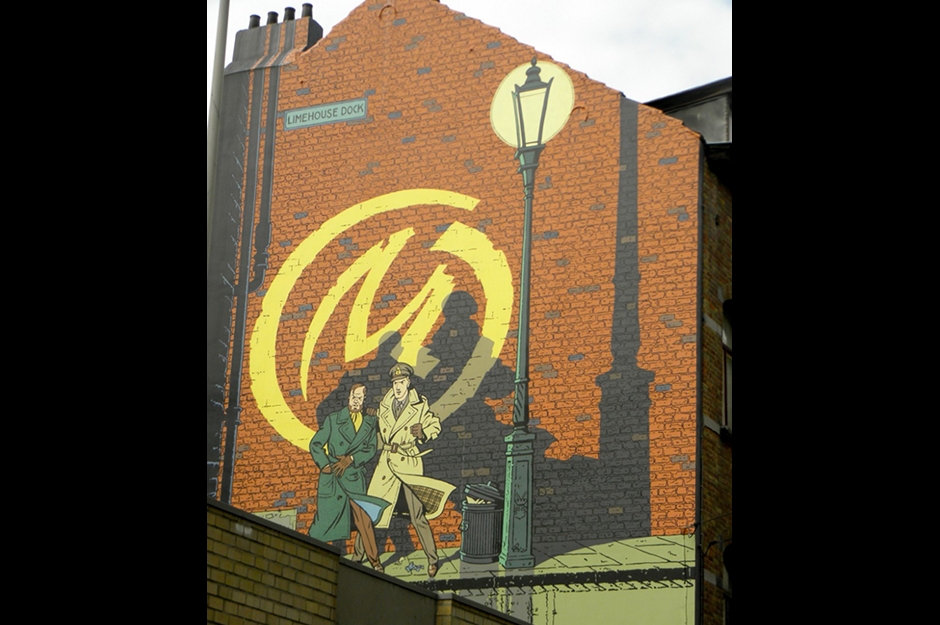 The comic Blake and Mortimer featuring protagonists Philip Mortimer, a British scientist, and Captain Francis Blake of MI-5 was Europe's first sci-fi comic. It was first published in 1946 in the Belgian comic magazine Tintin, and this classic image is from the cover of "The Yellow 'M'" from the 1950s. 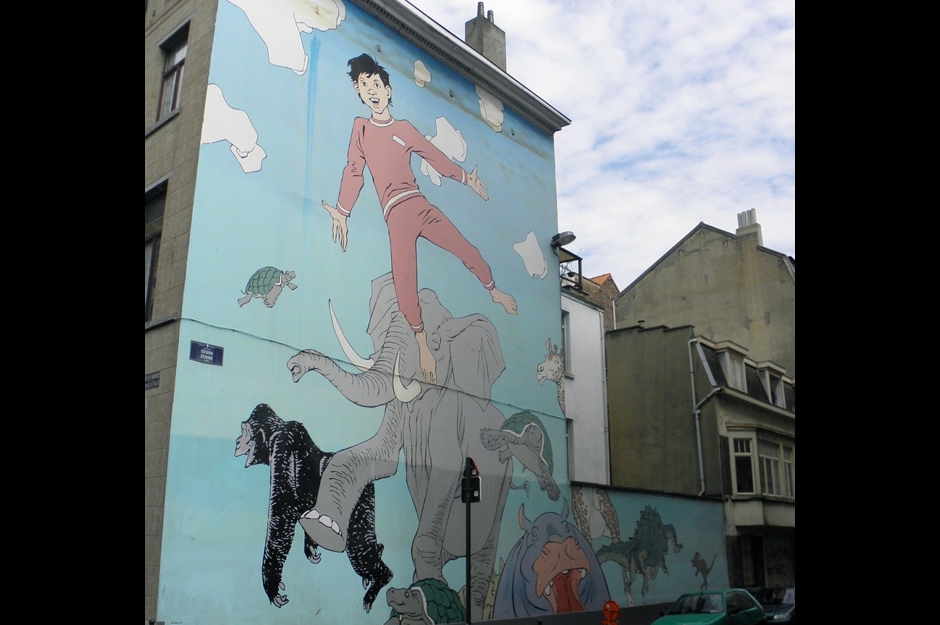 Drawn by Hermann Huppen and written by Morphée for Spirou in the 1980s, Nic heads to different worlds in his dreams. 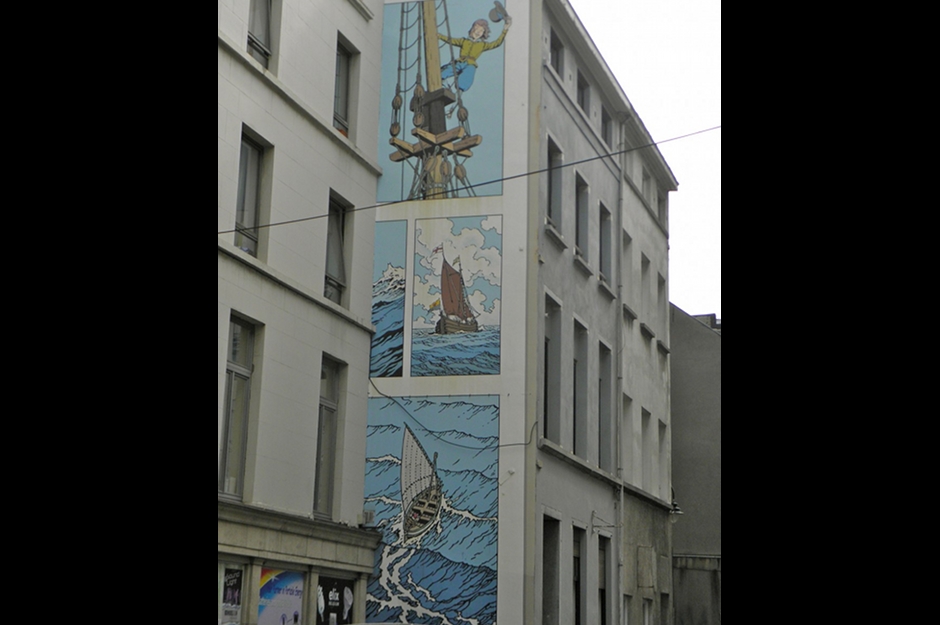 Cori started as stowaway and became a secret agent for England's Queen Elizabeth (not a bad promotion), and the comic is a historical one - Cori shows up as a spy during the attempted invasion of England by the Spanish Armada. 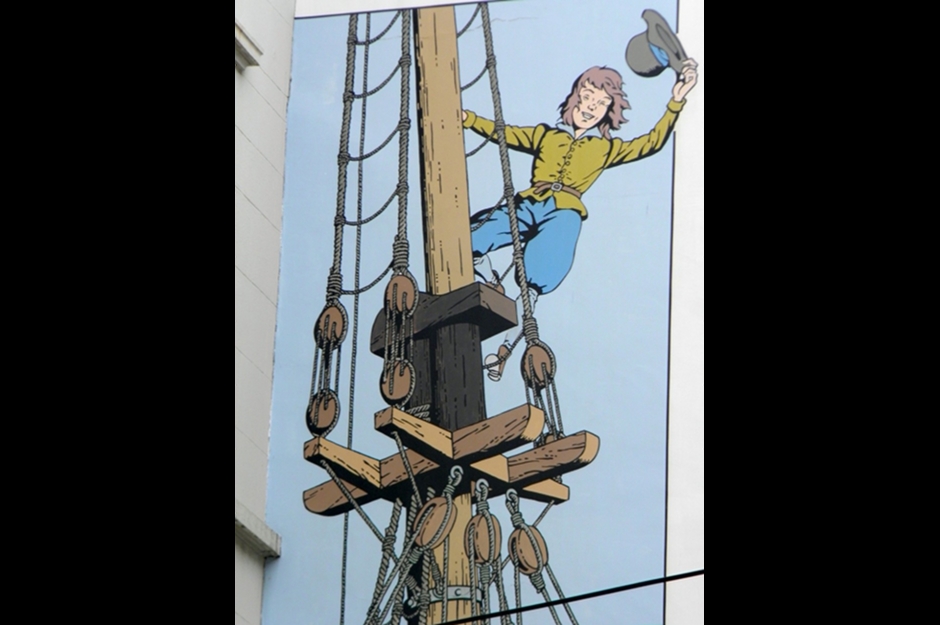 Creator of Cori le Moussaillon, Bob de Moor also worked with Hergé on some volumes of The Adventures of Tintin. 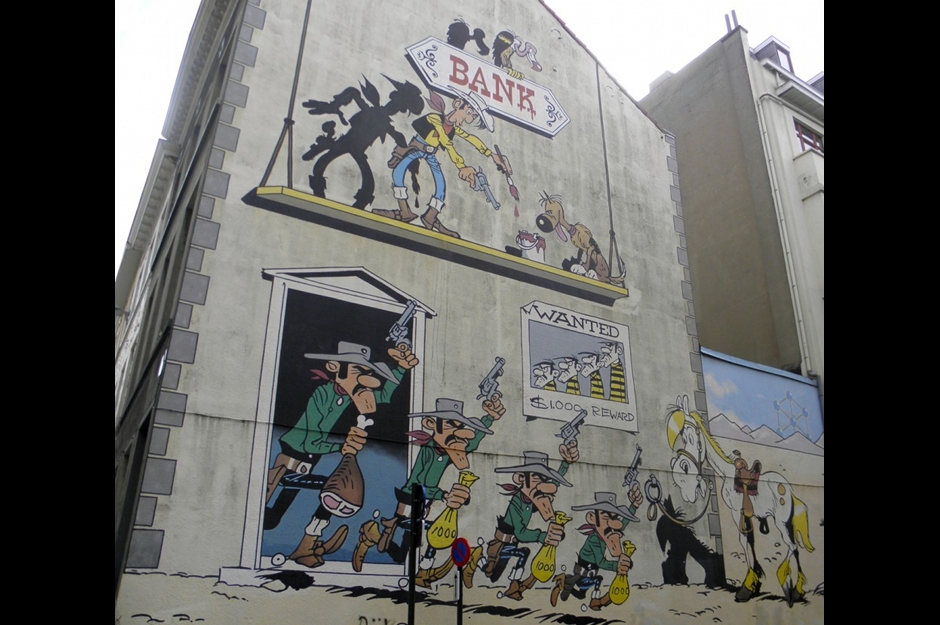 Lucky Luke, the wandering cowboy, is faster than his own shadow; he's already aiming at the bank robbers while his shadow continues to paint. The theme was a stylized and mythicized Old West, and the Dalton brothers, as seen here, are frequent villains in the comic. 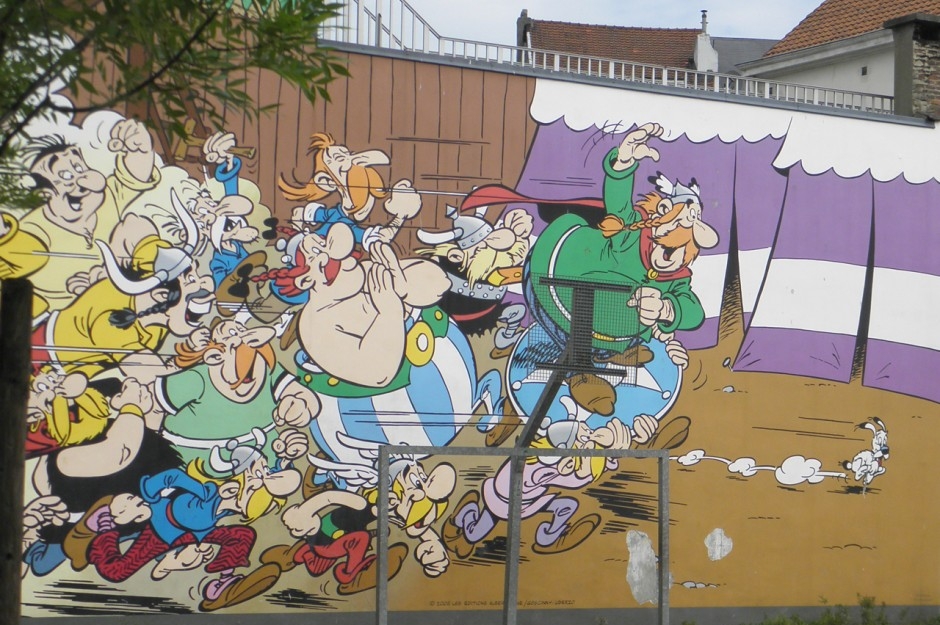 On the side of a school, this mural of Asterix and Obelix along with their entire town chasing Idéfix. The Adventures of Asterix is set in a fictional town in ancient Gaul surrounded by Roman settlements, and the village was one that always resisted, a bit like how the Belgians have seen themselves at various times in history. 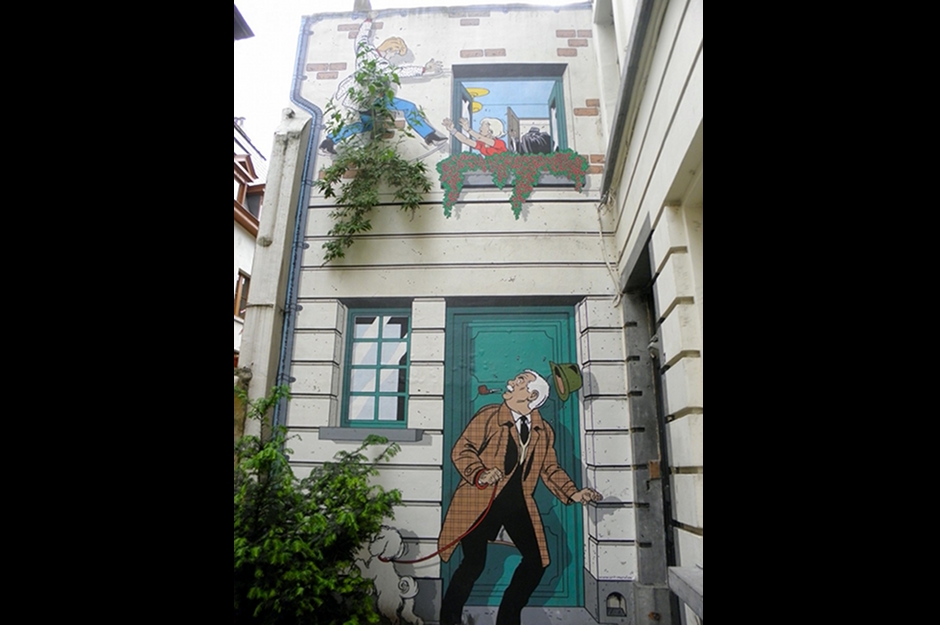 Originally published in 1955 in Tintin with drawings down by French comic artist Tibet and written by André-Paul Duchâteau, Ric Hochet follows the adventures of crime journalist Ric Hochet. In this scene, Ric Hochet is at the window of the inspector's daughter. Is he climbing in? Climbing out? The comic often ended with cliffhanger images like this. I liked on this one how the "real" features of the wall like the ivy fit with the mural. 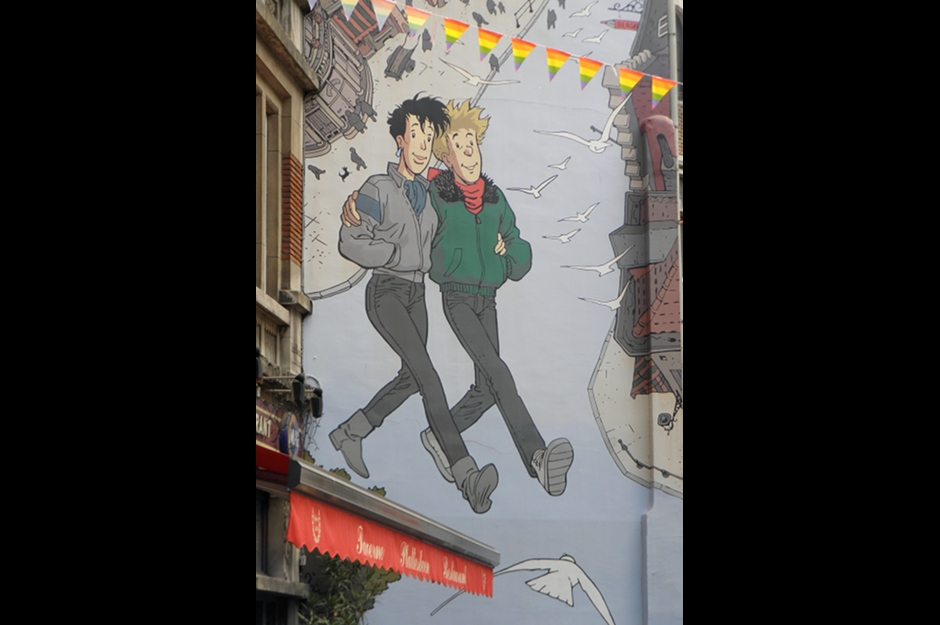 Frank Pé created Broussaille in 1978 for Spirou. The red-headed dreamer and hero of the comic Broussaille lives in Brussels, and he's shown here with his friend Catherine, who joins him on many of his escapades. This is the oldest comic wall in the city, painted in 1991 and sponsored by the nearby Platesteen restaurant. 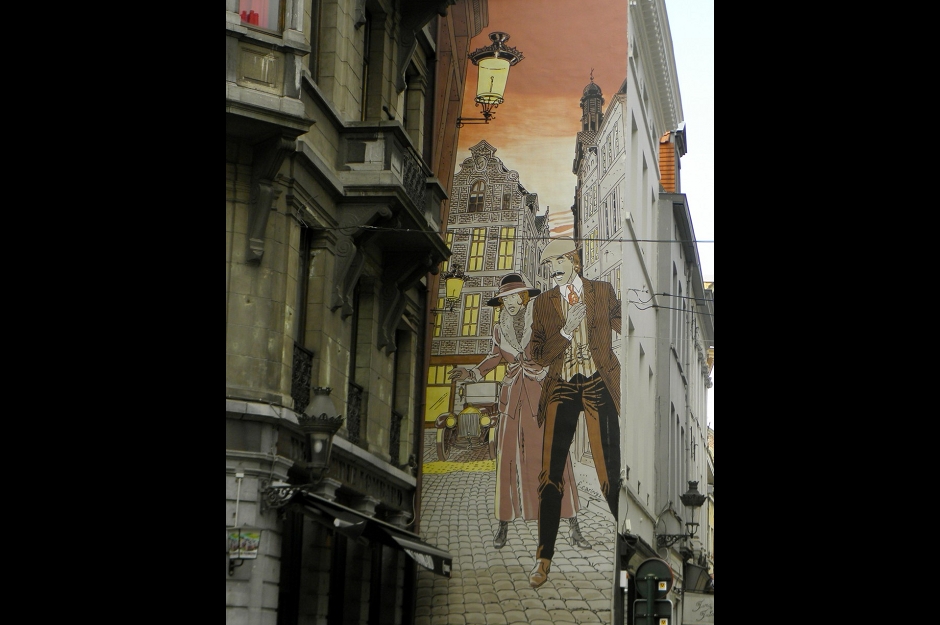 Victor Sackville, in the comic of the same name, is a detective and spy for the English in WWI. Spying for the English seems to be a popular theme. The comic was first published in 1985 in Why Not?. 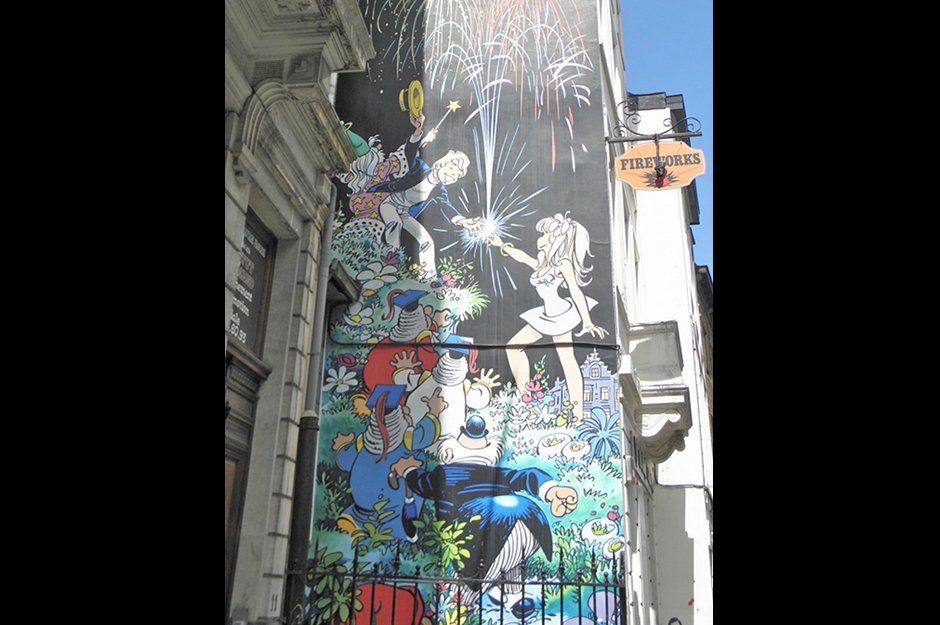 Olivier Rameau by Dany is set in a parallel dream world. The busty lass Colombe Tiredaile, who later marries legal clerk Olivier Rameau, is depicted nude outside the pages of Tintin - not all the comics of Belgium were designed just or at all for children. The fireworks scene here is sponsored by the nearby fireworks store. 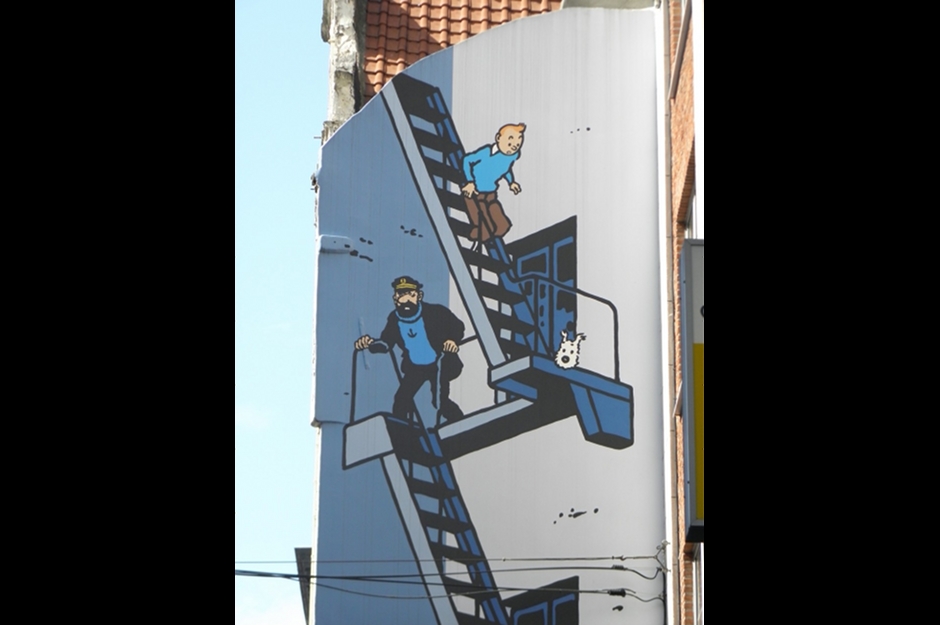 The Adventures of Tintin predictably stars Tintin as the hero. He's a young reporter from Brussels solving mysteries with his faithful companion Snowy. Later in the series, he's joined by Captain Haddock, seen here, whose colorful language and over-the-top emotional reactions are a counterpoint to Tintin's understated, almost neutral reactions. It is this neutrality and his often expressionless face that made him a kind of "everyman." Written by Hergé and originally published in 1929, it is one of Europe's most popular comics, and The Adventures of Tintin: The Secret of the Unicorn is going to be released in 2011 as an animated film directed by Steven Spielberg.

Tagged
Travel Insider Guides Brussels, Belgium
What did you think of this story?
Meh
Good
Awesome