LOCALS KNOW THAT 24 HOURS isn’t nearly enough time to fully take in what Toronto has to offer. With a seemingly endless list of daily events and huge annual festivities, not only does this city of 2.6 million have an action-packed day scene, but the nightlife’s off the hook. And with a population more multiculturally diverse than New York’s, LA’s, or Miami’s, the food and drink are incredible too. Here’s where to get started living it up in Canada’s biggest city. 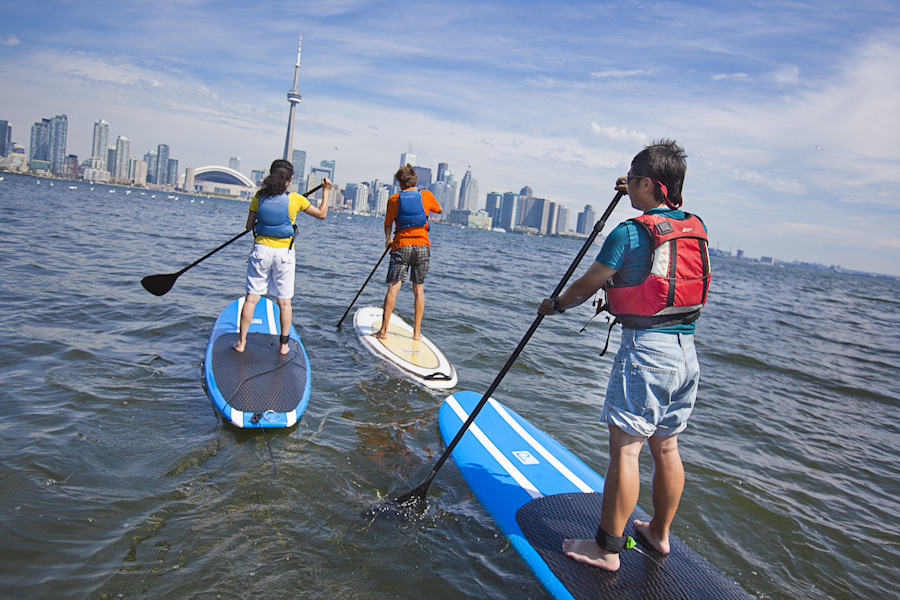 Start at the cozy Le Petit Dejeuner on King West for breakfast and fuel up with the “Hungry Gal” — eggs, potato rösti, apple coleslaw, and side options of your choice. Then head over to Kensington Market, a shopping complex where you’ll find amazing vintage stores like Blue Banana Market, Anice Jewel Boutique, and my favorite: Courage My Love. Don’t miss Don’t Call Me Cupcake for the rum cake mashup with strawberries and ice cream.

After checking out the market, head towards Wellington Street East, cut through Berczy Park, and make your way west on Front Street towards Union Station. Once you’re at Union, buy the economical TTC day pass, which will be your ticket for getting around the rest of the day.

Now jump on the Queens Quay West Street Car and head to the harbour. Get off at Rees Street and walk south to Harbourfront Canoe and Kayak Centre — it’s right on the water. Get excited, because you’re about to sign up for a SUP lesson. Yes, in Toronto. Seeing those skyscrapers and the CN Tower — the world’s third-tallest — from your board is pretty amazing. 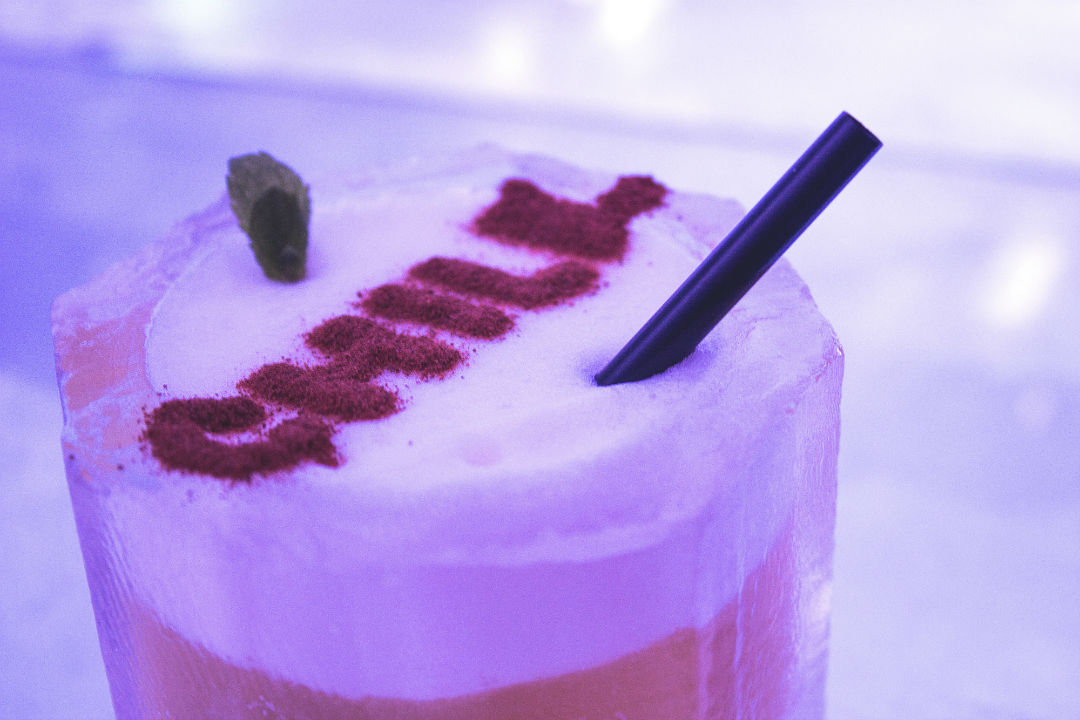 Hopefully still dry, head back to Union Station and take the subway to St. Andrew. From there, the 504 King streetcar will take you to CHILL, Toronto’s “ice house” where you can enjoy a (really) cold drink among the ice sculptures. No one in Toronto is going to judge you for taking in a liquid lunch. You got your protein at breakfast, so indulge.

After the goosebumps finally dance off your skin, go north towards Queen West, aka Toronto’s Art + Design District, for a walk through the creative heart of Toronto, where there are over 300 galleries, design houses, and boutiques.

After you’re done, you’ll want to head to Studio 6, your accommodation for the night. Check in and unwind in your studio suite where you can shower up, maybe sober up a bit, and change…from here on out, we’re headed into nightlife mode.

Take the subway over to Bloor Station. From there, make your way to O.Noir on Church Street, a restaurant where you’ll dine in total darkness. Request the surprise two-course meal. Fair warning — try to take it slow with each bite. I’ve had the pleasure of getting a good part of my meal all over my face.

If the dark dining has taken a toll on your outfit, head back to the hotel to change into bar clothing. Toronto is Canada’s fashion capital; from hipster to high fashion and everything in between, you’ll see it all on a night out here. One tip for tonight’s wardrobe selection — avoid baggy or athletic clothes. Aim for stylish, but keep it comfortable. And go for chic-yet-comfortable footwear, as you’ll be doing a bit of (perhaps tipsy) walking from club to club.

Now jump in a cab from your hotel towards King West and Blue Jays Way. Before heading to the clubs, grab some pre-party drinks at Toronto’s famous sports bar Wayne Gretzky’s (yeah, you’ve gotta do it), known for its buzzing rooftop patio, to start off the night with a Heineken followed with a “Toronto Island Iced Tea” or “The GQ.”

Now it’s on! Time to hit Toronto’s Entertainment district. There’s a massive selection of nightclubs, pubs, and bars throughout the downtown core, but there are three hotspots that always guarantee a memorable night. Jump in a cab towards King West and John and start the night at Maison Mercer. This 12,000-square-foot venue gets packed, and for good reason. From Fitness Music Fashion events to the hottest electro and techno DJs spinning, you never know what to expect here, and there’s a rocking dance floor so you’re bound to get close with one or two sexy locals. Since a lineup is guaranteed for Maison, it’s best to get to here by 10:30.

Just a few blocks north, The Fifth Social Club may seem a bit more upscale than Maison, but I guarantee the crowd and music (a mix of Top 40, R&B, and house) is just as fun. Don’t be surprised if you spot a celebrity or two at this ‘Hamptons’-styled nightclub.

Next up, head towards Adelaide to finish off your night at Uniun Nightclub. Factory Fridays sees a house and techno roster, while the music on #‎UniunSaturdays‬ ranges from Top 40 and hip hop to mainstream house. Open till around 3 (slightly later than most clubs in Toronto), you might want to start making your way to coat check around 2:30-ish to avoid waiting forever for your jacket.

Still going strong? For most people it’s now time for street meat, which can be found all over downtown. But for the best remedy for late-night hunger (especially when you’ve had a drink or maybe four; who’s counting?) wave down a taxi and head over to Toronto’s Chinatown, where you’ll definitely want to hit up one of these three spots:

Congratulations, you’ve absolutely killed it in your first 24 hours in Toronto! What to do tomorrow? Here are a few top options, depending on when you’re in town: 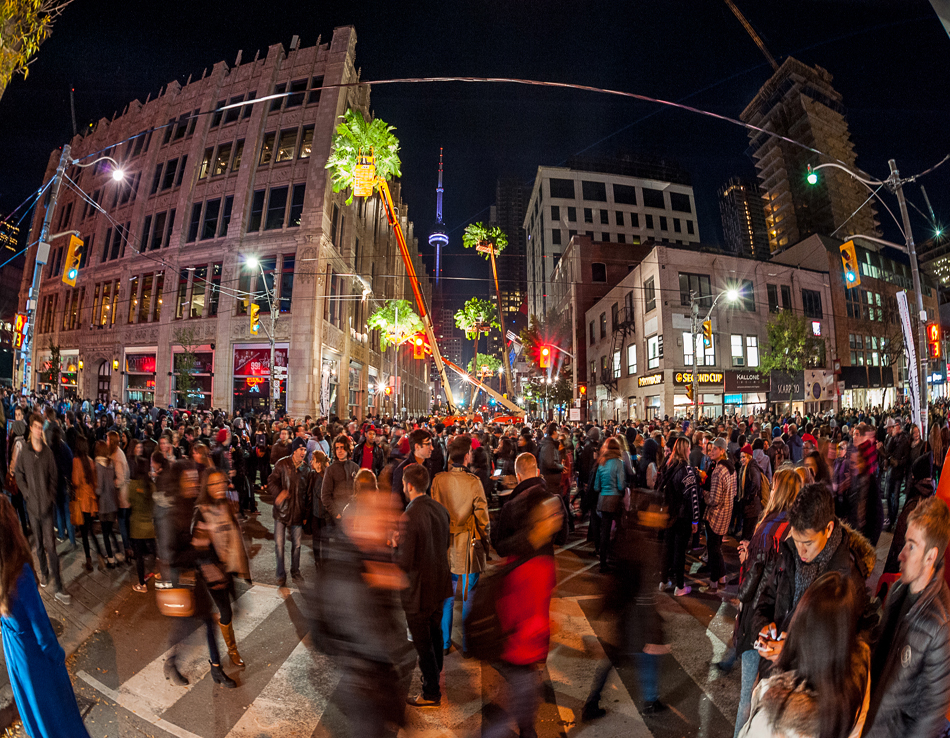 This post is proudly produced in partnership with Heineken
Tagged
Restaurants + Bars Insider Guides Toronto, Canada Heineken: Live Legendary
What did you think of this story?
Meh
Good
Awesome
✖
travelstoke
Download the mobile app
stoked by