Aussie tourists surge forth in a last-ditch blitz to conquer their Balinese stronghold. Local forces stage a late-night guerilla resistance of alcohol and prostitution. The front lines of a battlefield gone wasted.

Two a.m. Bloody Bintang singlet on the sidewalk. The invasion continues. Savage. Ungodly. The full frontal assault of Western convention. I close my eyes and point the camera.

At street level, the indigenous peoples barely seem to resist. Mowed down by the crude audacity of their foreign assailants. But deep within the catacomb alleys and sticky-floor backrooms, their guerilla tactics exact a gruesome toll. The Balinese people have repelled dozens of invasions over the last century. The battle of Kuta Beach is merely another stitch in the blood-soaked fabric of their enduring resistance.

This is my first experience on the front line. I wasn’t prepared for what I would confront here. Young men spilling their guts on the sidewalk. Brain matter blasted across the bathroom walls. The karaoke screams. The bubble party germicide. The horror. You have to make friends with it, even as it gives you a rough shoulder passing on the stairs. It’s only steroids, my friend. Smile, before a fight breaks out. 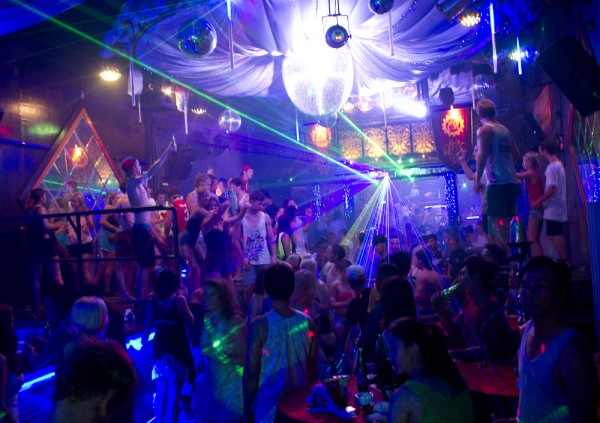 I’d been stationed in the quiet perimeter village of Canggu, where the fighting remains limited to a small Russian incursion barely able to breach the Tugu tideline. Kooks. Hipsters. Amateurs. I’d previously cleared visas to visit the occupied Bukit and Ubud districts, but the hostile streets of Kuta were above my pay grade. Too hot. Too dangerous. Too wasted.

The temptation was too much.

Crossing the traffic barricades is only a matter of patience. When my cab became mired in the perimeter traffic, I continued on foot. Marching quietly past the hand-job snipers and DVD boner patrols until the conflicted techno thud of bombing music grew deafening. Bodies littered the streets, uniformed in their white singlets and braided hair. The invasion of “schoolies” was in full swing, with newly graduated Aussie delinquents running berserk upon the local population. Ephedrine. Psilocybin. Testosterone. Surging forth like a locust plague. Holocaust of their own bleak future.

Back beyond the karaoke, yelling matches aboard the sinking destroyer called “The Bounty,” I came upon a squad of roidy mates pinned to the floor of a germicidal bubble party. They’d been hit hard by strafing rounds of Arak Attacks and were squirming in the foam like gutted pigs, clutching their adult sippy-cups in hysteria and delirium. Without a single female in sight to save them, they had only their sweaty mates to cling to. Their delusions of manhood. Not that there’s anything wrong with that, but tonight I could barely watch. 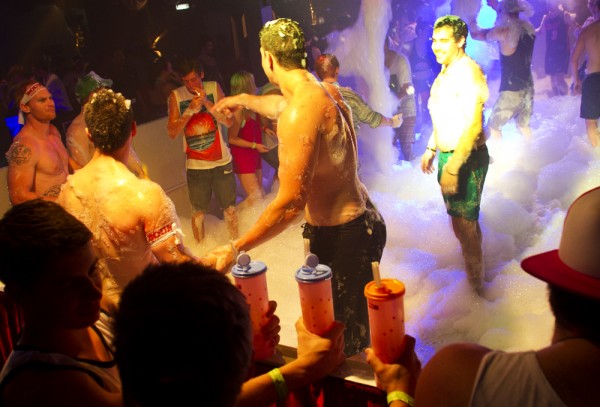 Such ruses are typical of the resistance, luring companies of zealous invaders across the threshold with caged lady-fodder and then falling upon them with napalm-grade jungle juice until they’re swallowed by the labyrinth of pulsing light and numbing sound. The onslaught is brutal. Black light drink specials. Laser beams, sexy dancers. They’re being torn apart and they don’t even know it.

For a moment I ignore my journalistic objectivity and wave them towards the exit. The trapped insurgents merely wave back in sick joy. Nodding to the beat of “Gangnam Style.” Lost souls. Swathed in toxic bubbles. They’ll be buried in those singlets.

Emotionally crushed by too many such tragic scenes, I retreat to basecamp at a beachfront hotel. Causalities pile up in the cruel dawn light. A makeshift triage moans beside the pool, with lukewarm Bintangs and day-old noodles for the wounded. Local attendants make ceremonial offerings in the pink dawn light, but the gods are giggling on ’shrooms.

No salvation there. Attendants pour gallon upon gallon of searing chlorine into the grey-water pool and the blood-burned patrons barely flinch. Ghosts. Zombies. Casualties. I watch a snail crawl along the edge of a straight razor. That’s my dream. That’s my nightmare.

Outside the hotel grounds, the Battle of Kuta Beach rages on.

Tagged
Restaurants + Bars Ambassadors
What did you think of this story?
Meh
Good
Awesome