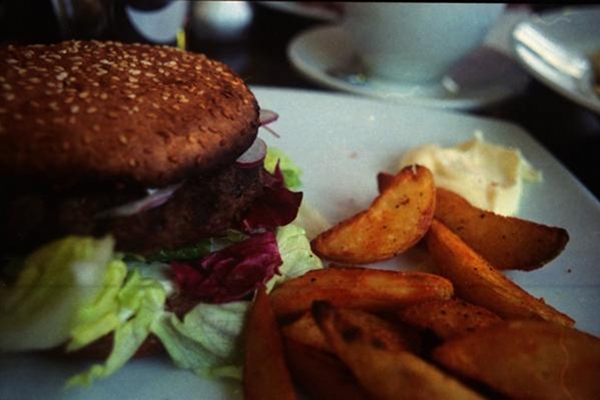 Why is it necessary to have multiple, competing $25 and up burger joints in one small Scandinavian capital?
Yes, it’s one of the most expensive cities on the planet, but do the gourmet toppings justify the price? Is there something special about the Danish version of the American staple? Is the competition fierce for a reason, or is it just hype?

EVERYONE SAYS THEY’RE doing it “American style,” so as a resident American expat, I set out to call their bluff. Here are the top three in competition, as rated on price, sides, and vegetarian options. 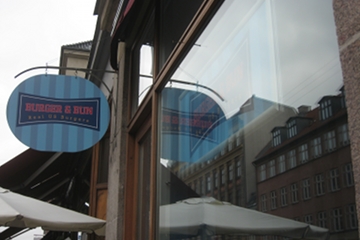 Burger and Bun photo by author.

How do you rate a $32 burger? At what point are you able to forget what you paid for the meal in front of you?

This is one hamburger that I’ll never be able to eat without obsessing over the cost. Big points for the milkshakes, though, which are difficult to find in Copenhagen and often undrinkable.

While Burger & Bun may tout their “real American burgers,” they apparently missed the memo that even a spectacular burger in the U.S. doesn’t come with a $30 price tag (or bleu cheese). Believe it or not, I don’t actually care that the ketchup is homemade or that you serve an affordable beer called L.A. Lager, namely because it’s from a Copenhagen microbrewery.

I’m homesick, but this hipster hot-spot does nothing to soothe my feelings of displacement. In fact, walking by this frou-frou diner in the former red light district and catching glimpses of local celebrities — the Play Doh-faced comedian who has his own Danish cable specials, the well-known businessmen who live down the block in adjoining flats but maintain their public heterosexuality by dating women half their age — makes me remember what a small, strange town I’ve chosen, and makes me yearn for the $4 state fair burgers from home.

Springing up as Burger and Bun’s primary competition, the obnoxiously named Cocks and Cows doesn’t pull every punch — just most of them. Thumbing their nose at their opponent and claiming some things are better left unaltered (serving Heinz instead of making our own ketchup), C&C has cheaper fare with the same pseudo-American flare. 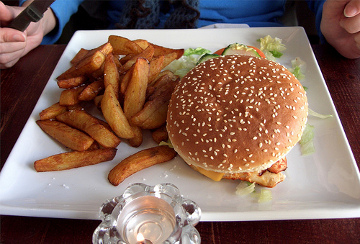 Another Copenhagen burger at $22:
Effervescing Elephant.

Take, for instance, the burger known as “the Governator.” With two giant burgers and onion rings stacked between two buns, it’s as impossible to digest as the California actor-cum-politician’s budget plans.

In what may pay homage to the same state (though indubitably more offensive), “the Illegal” is topped with jalapeños and guacamole. Too bad that it’s messy and disrespects the foreign, progressively minded clientele without being the best Tex-Mex burger in town.

If you miss classics like pulled pork though, this is the spot to grab the Danish equivalent, complete with a sopping heap of coleslaw on the burger. Their onion rings are a reason enough to trek over, though the sour-tinged fries with vinegar powder leave something to be desired. And hey, it wouldn’t be a proper Nordic burger joint without a whole (baked) potato on the menu.

With several locations in Nørrebro, Frederiksberg, and City Centre, Halifax stays above the fray with exceptional service, their own Pilsner on tap, and the best aioli in town. If you hope to polish off your side order of chips or fries, bring a massive appetite or prepare to split a burger and order one extra side dish. The surprisingly friendly staff won’t hassle you, even if you make special requests. 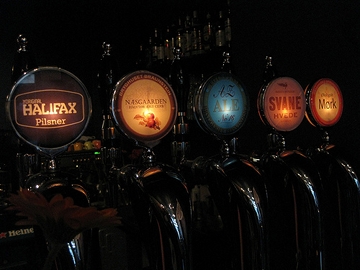 On tap at Halifax photo by add1sun.

Available in Danish and English, the menu is simple: pick your burger type and topping combination [named for locations (Zurich, Liverpool, Lone Star)], side, and dipping sauce. Not known for being a veg-friendly city, this local favorite nevertheless has two— count ‘em two! — veggie burgers on the menu, one made of chickpeas and the other from celery root.

Don’t think you’ll come to the land of root vegetables without trying the bottom half of your favorite watery green vegetable. While perhaps unappetizing in the grocery store, a celery root patty (with potato for extra solidifying starch) makes a mean sandwich when paired with Zihuatanejo toppings: guacamole, spicy salsa, and jalapenos along with the standard lettuce, tomato, and cheese.

It is, without a doubt, the messiest $32 item I have ever eaten. And it’s worth every kroner.

Spent all your money on burgers? Learn how to save some cash with Copenhagen on the Cheap.

If you’re feeling hungry, take a look at these shots: Hamburger Pornography: Tasteful Beefy Centerfolds and Their Buns. And back at MatadorTrips, you can find out where America’s best burgers are rumored to be.

The truth about artificial vanilla extract (and why you should always splurge for pure)
10 spicy, rich, nourishing vegan and vegetarian Ethiopian dishes
The 10 most vegan-friendly cities in the world
2021 is the year to try a vegan hotel. These are the world’s best
Eating vegan in Turkey is a breeze. Here are the 10 best foods to try.

On my way to work: Copenhagen, Denmark