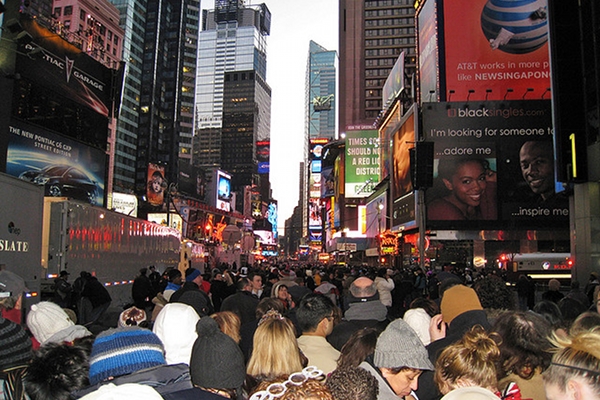 The crowd at around 4:30pm in Times Square in NYC for new year 2008. Photo by xmascarol. Feature photo by Laura M Bailey.

New Year’s Eve. It’s a night of built-in pressure, a forced party. You must have a good time, you must have someone to kiss, you must wake up the next day ready change your life completely with an elaborate list of resolutions.

In my fantasy world, I’m invited to a party full of beautiful and interesting people, all the food and wine is free, I’ll be wearing a fabulous outfit, the man I kiss at midnight will end up being my husband, and I’ll wake up the next morning feeling emotionally and physically ready to take on the new year.

But in actuality it costs too much, no one actually looks good in sparkly party hats, you may find someone to kiss but it may very well be someone you don’t actually like or possibly don’t even know, and in the back of your head, nearly forgotten, are all the New Years resolutions you made last year that you didn’t keep, a weight that’s matched only by the hangover of the next day. 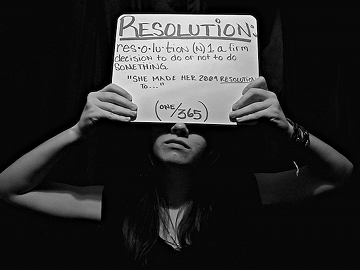 Resolutions. Photo by beX out loud.

Club promoters and bars draw people in with the promise of a glitzy and fancy night, but the cost for the night is often exorbitantly high with ticket prices (can easily be upwards of $100). Restaurants and hotels in popular New Year’s Eve destinations are likely to raise the rates.

And if it isn’t the cost, then it’s the crowds, at big events there will be teeming masses of humanity trying to wring a last bit of pleasure from the old year.

Some spots may seem delightful but have a high chance of making the start to your new year a bad one, so here’s some advice of Matador editors and readers on 6 overrated New Year’s Eve celebrations and some suggestions of how to better enjoy your night.

Edinburgh is famous for Hogmanay – a four-day festival starting on December 30 with the street party on New Year’s Eve as the high point. It’s plenty of holiday excitement, but it’s not all sugarplums and whiskey.

Nick Rowlands, editor at Matador Life, had this to say about Edinburgh at New Year’s Eve:

Everyone just takes to the streets and it’s ludicrously over-crowded and freezing cold, people just mill around drinking outside and waiting for the fireworks, there are no toilets (or, there weren’t when I was there) so sometimes people piss in the street. Pubs are crowded and charge a lot to get in, assuming they aren’t already full.

Andy Hayes was in agreement, and had some recommendations for what to do instead: “Most locals I know enjoy a warm haggis/neeps/tatties meal at home with a few drams of whisky and watch TV. Slightly cliché but better than being out in that mess.”

When I moved to the east coast, I was told by a handful of people that I should go and spend New Year’s Eve in Times Square in New York just once. “Why?” I asked them, “Why would you wish a crowd of strangers and winter weather upon me for 5+ hours? I know I just got here, but do you already hate me that much?”

Julie Schwietert, managing editor and a New Yorker, would avoid Times Square like the plague. 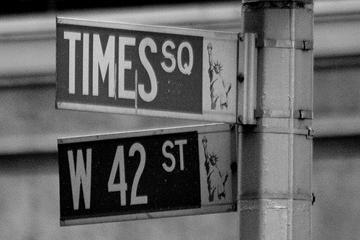 Times Square street sign; it’s one way to an overrated night.
Photo by S2 B.

It constantly puzzles me that people want to stand in the freezing cold, holding their pee for hours, corralled into pens, surrounded by drunk people, in anticipation of a ball sliding down a pole above the most gauche display of American commercialism possible: the Cup o’ Noodles sign.

If I lived anywhere else in the world and saw that on TV, I’d think Americans were idiots.

Better idea: stay in or go to a house party and, if you must, watch the event on TV. You’ll be warm, you’ll be able to go to the bathroom whenever you like, and you won’t have to fight the crowds trying to get back to your bed after the ball has dropped.

Which this year, according to CNN, will apparently contain Snooki, of dubious MTV’s Jersey Shore fame.

Crowds are nothing compared to Puerto Rico, where there is a possibility of getting accidentally shot. Julie explains:

I would highly advise not to go outside if you happen to be in San Juan, Puerto Rico. There’s a problem with firing guns up into the air and wounding people unintentionally–that’s so problematic that the police have been having a campaign, No más balas perdidas, for the past few years to try to prevent “lost bullets” (that’s the literal translation). A neighbor of mine had his ear grazed.

It’s not just San Juan though, a young boy was injured in Miami last year (Miami Herald). So stay in and stay safe. 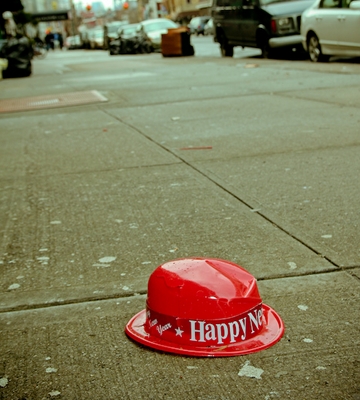 Though there is a fireworks display near the London Eye, London doesn’t have one main event, but instead lots of club nights with promises by club promoters that it will be the best New Year’s Eve party you’ve ever been to. But you don’t always get what you pay for.

Karen Thomas, Matador reader, London native, and employee in the Mayor’s Office, said this about New Year’s Eve in London:

“Overrated is Pacha, Ministry of Sound, Studio Valbonne. You pay around £50 to get in and then drink £10 a bottle beer. Personally I’m going to a pub in Stoke Newington. It’s free & cool.”

Short and sweet, skip the big clubs with the big price tags and go somewhere free.

Paris rings in the New Year with a light show on the Eiffel Tower. But the crowds along the Champs Élysées and beneath Eiffel Tower itself will be heaving. And while the city doesn’t set off fireworks, there will be fireworks going off – it’s legal to buy and set off fireworks in the city, and it’s a popular activity for teens who seem to have no problem setting them off in crowds and even in metro stations (Destination 360).

And if you’re looking for a night on the town, you might want to make the reservation now for next year; it will give you time to save the money to pay for the night. Sophia Pagan, Matador reader and Paris photographer, says the “events in Paris are very expensive. Like O’Sullivans, next door to the Moulin Rouge, has an event that’s been sold out for months.”

But on the plus side, the metro is free (though stops running at 12:30, so you better want to head home straight away after midnight) and if you head away from the center of town, there will be bars or restaurants open, decently priced and not so jam-packed.

Tim Patterson, longtime contributor and former contributing editor, brought the dangers of mochi to my attention.

Kagami mochi is a traditional New Year’s treat in Japan made by putting two mochi disks together. Mochi is a rice cake made of rice paste that has been molded into rectangles or circles.The treat is broken and eaten in a ceremony. Mochi is also a main ingredient in Zōni soup, another classic Japanese New Years dish.

Sadly, as mochi is quite sticky, older people have choked to death on the traditional treat, with the number who died published in the papers the next day.

So if you’re older, maybe just give these dishes a pass. Everyone else, remember to chew carefully.

Are there any New Year’s eve events you think are overrated? Or did we get it wrong, and these events are actually amazing?

New England beach pizza is the sweet, saucy style everyone needs to try

The Eiffel Tower is closed due to a strike