THE TERM’S BEEN around at least since Norman Mailer called himself a White Negro in the 1950s. But according to snide contemporary outlets like the Urban Dictionary, there’s not much more to the hipster than his/her ironic mullet, the preference for cheap swill and poor hygiene — oh, and the avowed dislike of the word “hipster”.

Citing the rise of real estate prices in hipster neighborhoods, Time Out New York has accused the demographic of selling out, morphing into “indie yuppies.” For true cool to begin its comeback, the hipster city guide argues, all hipsters must die.

Silver Lake lives this tension on the ground. Some more authentic heirs to boho beat culture still rent studios here, though the bubble has priced out a lot of starving artists. Body odor’s harder to come by, and Rough Trade, the gay sex shop, just closed its storefront.

These days, the area’s a vibrant mashup of rockstar shades, wildly expensive cheese shops, lingering dive bars, graffiti murals, industry types bravely forging a life far away from the West LA cult of the body-beautiful (but within walking distance of excellent coffee), and even, now and then, the occasional remnant Latino drag queen.

Here’s a guide to drinking in the local style, at both ends of the spectrum.

The Red Lion wears its dinginess with pride. Its dark wood interior makes it homey in a good way. And then there are the lederhosen. Yes, the waitresses play to the German theme with ironic/authentic attire. What could be more Silver Lake?

The bratwurst are greasy, the herring salad is salty, and the beer comes in steins. Some poor souls never even find their way past the second bar into the beer patio. I watched the last World Cup at the Red Lion, and plan to do the same with the next, thereby completing some kind of hipster/international circle. It’s a wonderful, hoppy, greasy experience. 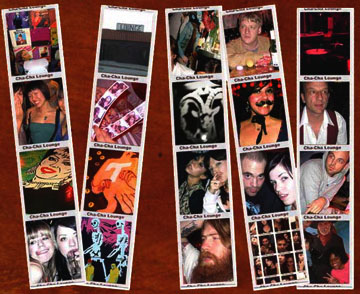 The last time I went to the Cha Cha Lounge, the smell of disinfectant was so overpowering I could barely drink my weirdly sour cocktail. My friend ordered Pabst Blue Ribbon – the original, ironic hipster Silver Lake move. The décor is what I would call Tiki frat revival by way of día de los muertos.

It has a wacky vending machine. It can be loud and unpredictable. Like many other Silver Lake institutions, it seems to have a drag queen past, but now usually seems hetero. Some would call the Cha Cha Lounge the dive bar ground zero for Silver Lake hipsterdom. Though any true hipsters therein would never say as much.

Akbar is another relic of truly hip old Silver Lake, from back when it was a gay neighborhood, but Akbar’s still consistently a mostly-gay hang-out. Its online manifesto is self-deprecating and funny, capturing the place well: “We think we’re Ginger, but we’re really Mary Anne.”

The dance floor’s small, but it gets going on a crowded night. You haven’t really lived Silver Lake until you’ve had a beer and done arts-and-crafts in the back room of Akbar. (I made a clock out of an old LP cover that says “Oriental Music.”)

Stinkers has an animatronic Skunk inside. Is this true to Silver Lake’s kitschy, unserious soul? Or is this the Jekyll & Hyde of Silver Lake, a theme-park-ready bar? J&H in New York signaled the historic end of Bohemia, as flocks of outsiders looking for a boho thrill settled instead for a waiter doing the monster mash.

Stinkers is not easily categorized. What does it mean that gangs of bikers convene here, but that they seem like they might be comprised solely of hipsters on crotch-rockets? What does irony mean when it turns on itself, again and again, devolving eventually into a mise-en-abîme of layered meaning? I don’t know. I just wanted to use that fancy French term in a sentence. 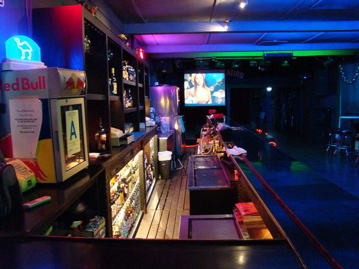 Word on the street is that on a good night you can spot Kiefer Sutherland at the Silver Lake Lounge. It’s a black box with standard drinking fare, but it’s crucial for this list.

When my friend’s band played there, the lead singer was stuck between a protruding wall and a speaker. Highlight of the evening? The band-leader’s father-in-law wore Bose noise-canceling headphones for the entire show. Right in front. He said it worked better than earplugs.

This place still serves as a Latino drag queen hangout on some nights. It ain’t hipsterdom unless the music is loud, weird, and your shoes stick to the floor.

The 4100 Bar is a hookah-lounge style affair. The drinks are standard. A little bit of parking. Nothing particularly out of the ordinary. Some goth nights, some gay nights, some crowded nights. It’s a good place to see a lot of other people and to drink with a feeling of being out and in private at the same time.

The Mixville at Edendale is part of the new Silver Lake, by which I mean, the new median housing price Silver Lake – i.e. it’s posh. The bar menu is tasty and comes with happy hour prices. The mixed drinks are good. The mojito is almost (but not quite) up to the “New Cocktailian” standards described by Los Angeles food-god Jonathan Gold.

Sit outside in the courtyard in the summer, or watch for the occasional celebrity in the crowded bar. The building is a retrofitted firehouse. When I saw an Olsen twin here, a man came up to her at the bar and gushed, “I love your work.” Ah, ironic Silver Lake.

Yes, Malo means bad, but in the good way. Another posh-ish addition to the scene, Malo has incredible chips and salsa. Burn your tongue with the habanero crème salsa. Cool it with a margarita. You won’t ever want to stop. They have a good tequila selection. You can almost forget that Sunset Blvd. is roaring outside, especially in the summer. 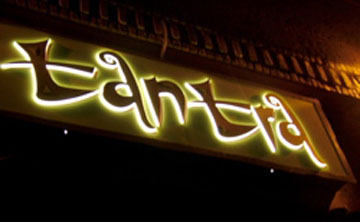 Bollywood dance music comes to life on packed Friday nights at Tantra. It’s a loud but glitzy lounge, with mango martinis and Indian food from the restaurant.

If you’re just having dinner, it’s too much to pay for what is just good Indian food. But if you’re looking to drink froo-froo cocktails, maybe dance, maybe try to do that thing they do with their heads in the Bollywood videos, you’re in the right place.

It’s not really a bar, it’s a music venue. But you can’t say you’ve been to Silver Lake without stopping at Spaceland. Every indie band since indie was used to describe bands, and probably since before then, has played here.

On a good night, with the right music, you can smell the bohemian dreams dripping from the ceiling. It’s an intimate venue. I live within earshot of this place, which I used to think was annoying, but now that I’m being slowly priced out, I’m grateful for the bit of grit that the thumping Spaceland baseline still gives the neighborhood.