SHE WAS A red-eyed coffee drinker, a kombucha brewer, an organic juice squeezer, a rare Scottish hippie – possibly an ex-drug addict – working the reception desk of my Port Charlotte hostel. She was pale, Meryl Streep-ish, about 35, wearing a purply tie-dyed T-shirt, brown leather sandals, a long blonde ponytail, no bra, no makeup, jangly earrings, tight black jeans, and large oval eyeglasses that telescoped the center of her face.

I was a whisky pilgrim ferry-fresh from mainland Scotland via Kennacraig, onto the Hebridean isle of Islay to taste its single-malts and tour some distilleries — Laphroaig, especially — after my surfy outing in Orkney and a jaunt across the mystic panoramas of Shetland.

“Bloody strange that people will travel all the way here just to drink whisky,” she said. “It’s like going to England just to drink tea.” I told Heather that, for me, Islay’s whisky was cerebral, not mere drink, and Laphroaig’s aroma and palatal complexity — iodine, peat, salt, ocean, seaweed, smoke — flung my psyche afar.

I also theorized that whisky was not little Islay’s sole lure, but anyway, I did need a bed. She pointed to my room: a narrow cell with a metal bunk and sink and wall heater, comfortable enough, but overpriced at 30 quid per night.

No matter—out the hostel’s front door and 45 seconds on foot led me to the small bar of the lochside Port Charlotte Hotel, its smiling, rosy-cheeked drinkers downing pints of Angus Og Ale and sipping drams of the 227 available single-malts from Islay’s eight distilleries: Lagavulin, Ardbeg, Caol Ila, Bruichladdich, Bowmore, Bunnahabhain, Kilchoman, and Laphroaig, whose name means “beautiful hollow by the broad bay.”

Outside, the air was crisp, the wind briny, the rain imminent — winter loomed. The hotel’s bar, crowned Whisky Pub of the Year in 2009’s Good Pub Guide, was certainly a snug nook to imbibe for the evening. 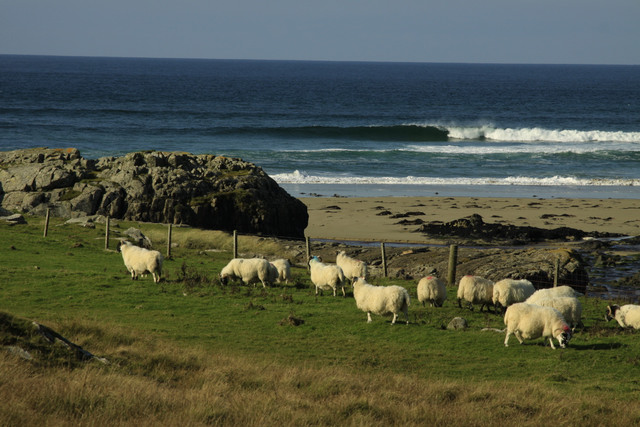 That morning I had lucked into a rocky right-hand reefbreak on the left flank of a scenic bay, a special place where sheep and Highland cattle grazed green grass and flocks of geese honked high overhead. The wan sun shone and there were no humans anywhere. The waves were glassy and blue, head-high and playful, the water clear and about 45°F. Ireland, a black smear, lay low in the distance.

After the session I had a pleasant guided tour of Laphroaig’s seaside distillery. On the malting floor I chatted with a friendly employee named David, who’d been with Laphroaig for three years; his prior eight were spent with Bowmore.

“There’re no hard feelings,” he said. “Aye, we’re all friends in this industry.”

I wondered if he knew of any Islay surfers.

“Nay, not much surfin’ here. But me mate is into windsurfin’, aye. He does it at Machir Bay. He says there are often some big breakers. Have you been to Machir?”

After the tour I drove straight there and saw my first local surfer after four weeks of exploring Scottish islands. He was arguing — something about making coffee — with a girl inside his yellow Kombi before he waxed a red egg-shaped thruster and attempted to paddle out, but was annihilated by the large, junky windswell. Then a squall appeared, so I left and drove north for a bit of coastal hiking and birding (Islay supports more than 200 species).

By the time I reached the thin beach trail the sun was low, the light pastel, and the rustic traits of autumn harkened to a quiet time in my travel memory. Certainly, Islay was of the purest, prettiest places on Earth.

I walked holding a green 35cl bottle of Laphroaig’s flagship 10-year-old whisky, taking intermittent swigs while absorbing the environs. A cool, light breeze blew offshore, and flocks of birds squawked overhead; I strode through swampy fields and across untracked dunes, and all afternoon I saw just one other person.

He pointed at my bottle. “I see you’ve been sampling our local.”

“Lovely day!—a fine day,” the old bearded man said to me. His brogue was loose and breathy. Binoculars hung from his neck — we’d been observing the same pair of golden eagles. He pointed at my bottle. “I see you’ve been sampling our local.”

“Laphroaig’s my favorite. I drink it all the time back home. Basically, it brought me to Islay.”

“Aye, many people come for the whisky foremost. It’s our ‘water of life,’ so the saying goes. You Americans, you have your bourbons and that. I really fancy a drop of Maker’s Mark. Have you had it?”

“Aye, and I’ve had that Laphroaig countless times,” he said, chuckling. “I reckon it’s better than water!”

With dusk the sky flared ocher; thin clouds threaded the rural twilight. In lieu of light pollution, vast constellations appeared, followed quickly by a vigorous cold front. It was time to repair to the sandy shore of Loch Indaal and Port Charlotte, its classic whitewashed village slated for the site of Islay’s ninth whisky distillery, a retrospective push by Bruichladdich, Islay’s “sophisticated” single-malter.

Like Port Charlotte Hotel, Bruichladdich was within walking distance from my hostel, but the distillery had no bar, which didn’t matter because Port Charlotte’s was aglow warmly with drink and peat fire and live bagpipe with fiddle, a boozy clime of Scottish cliché. And I was excited to drink in a pub where no one knew my name.

“Well, if it isn’t Michael Kew!” Heather sat on the barstool nearest the doorway; she cocked her head and looked at me slyly. “I thought I might find you here,” she said. Her hair was up, her glasses gone, and she looked sassy, somewhat lubricated, yet she was sober. In a utopia of booze, the woman didn’t drink.

“What brings you here this stormy night?” I asked.

“The live music. And I could walk here. You?”

“To drink whisky, and I walked here, too. This bar recently won a whisky award, you know.”

“I had no idea,” she said, rolling her eyes. She patted the stool next to her. “But if you want to get to know me better, why don’t you sit and have some tea with me?”

“No thanks. I’m going to sink a few drams by the fire, near the musicians.”

“Has anyone ever called you an arsehole?” she asked.

I nodded to the barkeep, who’d heard the exchange. “I’ll have a dram of Octomore 140, please.”

Tagged
Travel Scotland, United Kingdom
What did you think of this story?
Meh
Good
Awesome