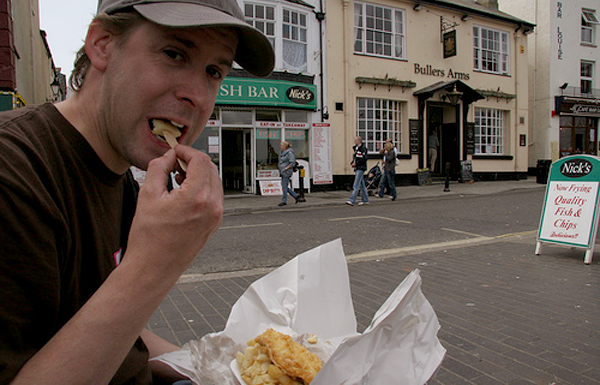 It’s easy to assume that we Brits don’t care about food.

While our neighbours the French enjoy long, leisurely lunches and fine wines in elegant restaurants, we eat our main meal at the bus stop, drink our own body weight in warm lager and then cradle a donner kebab on the way home like it’s our only friend. We consider chips and curry sauce a square meal and we do unspeakable things to peas.

But many of us love food, really we do. In fact, Britain is a haven for foodies if you know where to look. Thanks to immigration, our lack of culinary snobbishness and our willingness to try anything once, you can find anything you want in the supermarkets on this rainy isle. Even better, unlike Rome or Madrid, you can literally eat your way around the world in London.

However, if you’re keen to sample more traditional British fare, here’s what to look for: 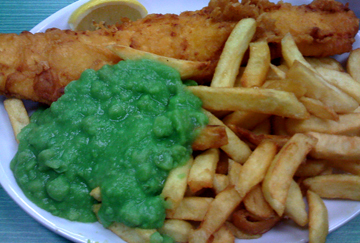 Saying you’ve had British food after trying fish and chips in Leicester Square is like claiming you know all about Italian Cuisine after eating in Pizza Hut.

Instead, do it properly at The Fish Club in Clapham Junction where you can get Red Mullet and Sweet Potato chips to go with your mushy peas.

Otherwise, head to the coast and look for any traditional ‘chippie’ where the queue snakes out the door. 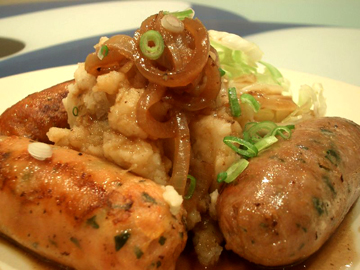 Nobody does comfort food better than us. On a miserable cold day with a hangover to mop up, sausages, mashed potatoes and gravy are just the ticket.

In London, The S&M Café in Islington is the place. Film buffs may recognise it as the café used in the Mod classic Quadrophenia. 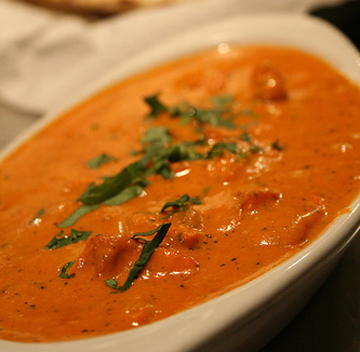 No one in India has ever heard of our number 1 favourite dish. Lovingly made just for us, the chicken is marinated in yoghurt and spices before being cooked in a creamy tomato sauce and sprinkled with fresh coriander.

Most British expats would sell their own families to get hold of one of these bad boys.

If you’re planning on pounding the streets all day, this is for you. The breakfast of champions and fat workmen, fried eggs, sausage, bacon, mushrooms, bread and tomatoes are followed by toast and tea.

Finish it and you’ll never need to eat again. Ever. 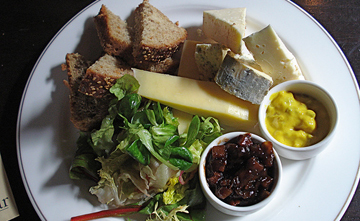 Britain and Ireland produce some of the best cheeses in the world and that’s a fact, ladies and gentlemen. Look out for strong mature Cheddar, crumbly Wensleydale with Cranberry or blue Stilton.

Order a pint of real ale and a ploughman’s lunch (cheese, bread and pickles) at the Mark Addy in Manchester and you’ve got the real deal.

You’ll forgive the Scots for their deep-fried Mars Bars when you taste their salmon. Best served with new potatoes and a salad, Scottish trout is pretty damn fine too. For succulent crab, head to Norfolk on the East Coast of England.

If you want to learn about England, go to the pub. Get a drink down a cold stuffy Englishman and before your very eyes he’ll turn into a loquacious comedian. Buy him a couple more and he’ll dance on your table with his underwear on his head.

Besides the in-house entertainment, the pub is the place to sample Britain’s one true passion; beer. Traditional hand-pulled English bitter is darker than lager and an acquired taste. If you like it, let The Good Pub Guide or Camra’s Good Beer Guide show you the way.

To soak up some of the alcohol, rich meaty casseroles like Beef Wellington or Lancashire Hotpot are just the thing. 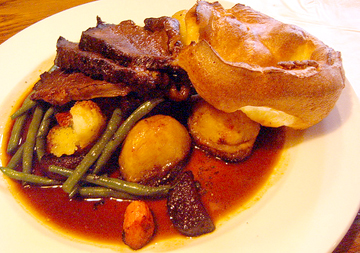 It takes some preparing but by God it’s good. Whether you plump for roast beef and Yorkshire pudding (small rounds of thick pancake batter which are baked and smothered with gravy), lamb with mint sauce, pork with apple or chicken with sage and onion stuffing, this is a feast made for sharing.

Crack open a bottle of wine and then sleep it off in front of the TV. If you really can’t make your own, The Albion in London’s Islington have won awards for theirs. 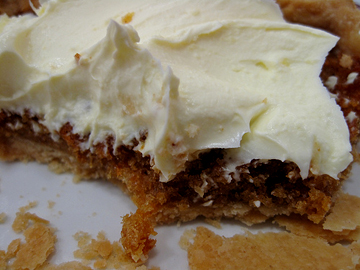 Sweet-toothed travellers need to come to Britain. Frankly, we rock when it comes to pudding.

Rhubarb crumble with Cornish vanilla ice-cream, the meringue shaped heart attack that is Eton Mess, treacle tart, the delightfully named Spotted Dick, they are all utterly delicious and unashamedly designed to make you fat.

If you’re in the North, make a pilgrimage to Bakewell in the Peak District for great trekking and the hands-down mother of all desserts, Bakewell Tart. In London, stuff your face in style at The Brew House in the grounds of a stately home.

What did you think of this article?
Meh
Good
Awesome
Bookmark
Posted In
Travel
Destinations
United Kingdom

The most stunning towns in England’s Lake District

This English soccer stadium will be made entirely of sustainable timber