Editor’s Note: This is the first in a three-part series on Mexican cantinas. Stay tuned for the next two pieces, to be published this week on Nights.

It is a little past four in the afternoon, and Mexico’s great cobalt sky has faded to a pale blue-white, with tired clouds slipping along its domed edges. The wooden doors of the cantina give the creaaak-crreeaak of rusty springs as they swing behind us; they are the flimsy barrier between the outside world of the street and the inside world of men and booze. 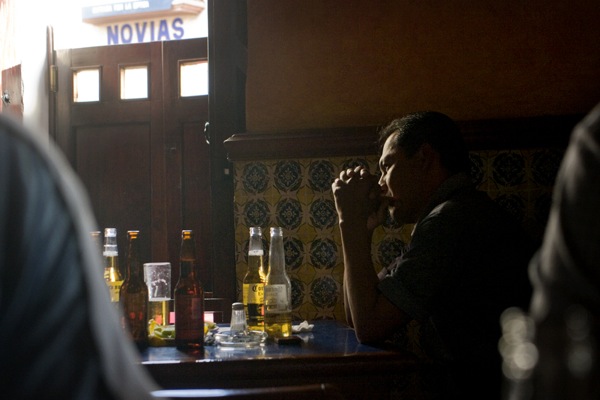 Inside, bars of pale yellow light fall across wooden tables, and men sit drinking. There is a bar to the right, with wooden stools and white-shirted bartenders standing before a wall of tequila. There is a big-screen TV in the far left-hand corner showing lucha libre, men humping each other in elaborate silver costumes.

The tinkly strings and baleful voices of a ranchera fill the background. A few men turn their heads and then return to their long-necked beers. We choose a table.

“What can I get for you?” the waiter asks, with only the slightest glance in my direction.

We order Victorias all around. “Les gustaria una sopa Azteca?” the waiter asks, and we give faint grins and smiles and say, “Si, porfa.” Let the botanas begin.

The cantina, you see, is not just a place to drink, and to weep, and to watch homoerotic wrestling and listen to mariachis sing about troubles with women-betrayers and viejas and putas, but also, to eat. In the majority of cantinas, each beer will be accompanied by botanas, which are the Mexican version of Spanish tapas. The more beers, the more elaborate and plentiful the botanas. 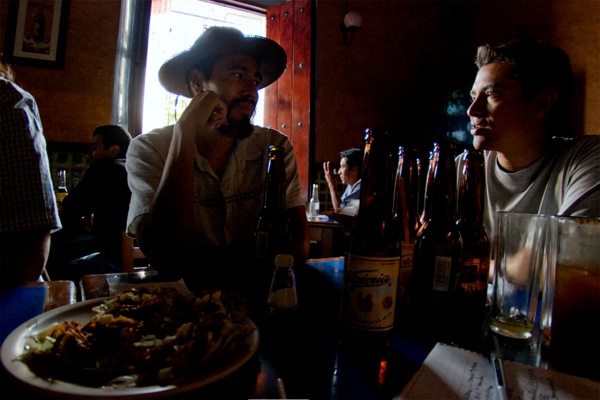 Here, there is a sopa azteca first, with fried tortillas, queso fresco, and the inevitable heaps of chicharron. The latter–fried pig skin—is the cantina staple. It’s fatty, meaty, manly and, to me, incontrovertibly disgusting. Later there are tostadas of pulled pork, then tacos made with hot dogs, onions and poblano peppers. We eat, we drink. And drink a little more. And then remember there are more cantinas to visit.

The slanting light feels softer, kinder now. Evening breezes with the faintest hint of coolness drift through the long, narrow windows, which are open save for the wrought iron that creates the barrier between here and there. I reluctantly give in to the urge to go to the bathroom.

We scrounge around our pockets for change and pay the check. The men around us are continuing their hushed, gruff, curt conversations as we leave. It is, after all, only five o’clock. The weeping is for later, and further south in the city.

Black and white photos of a seemingly random selection of cantina heroes adorn the walls. Bob Marley is there, as is an exuberant, naked Marilyn Monroe; Frida Kahlo, Che and Maria Sabina are present, all smoking joints, and Zapata and Pancho Villa gaze stoically from their portraits, giving off that stolid, serious, revolutionary posture. 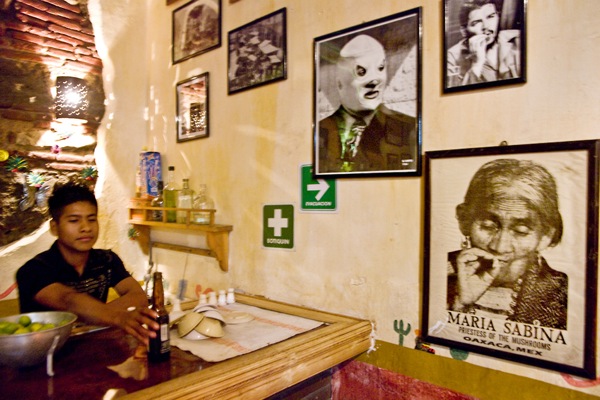 The jukebox is playing–as if out of a surreal, hazy dream–Pink Floyd. Men sit hunched over the wooden tables with caguamas (liter jugs of beer) between them. The question here is not “what-would-you-like-to-drink” but rather,

“Um…regular.” We have to last the night, after all. Five beers and a plate of peanuts later, we’re taking in the new ambiance. I notice a poster on the far wall condemning violence against women, and a “No Smoking” sign: indications of new waves, new influences, infiltrating the cantina. I am not the only woman here, although the other one looks slightly uncomfortable and huddles over her beer, leaning towards her male companion.

Here, as we laugh and squeeze lime over peanuts and order another round, and then another, the sky makes its descent into midnight blue, a rich, vibrant color that fills the ever more distant streets beyond the swinging doors. 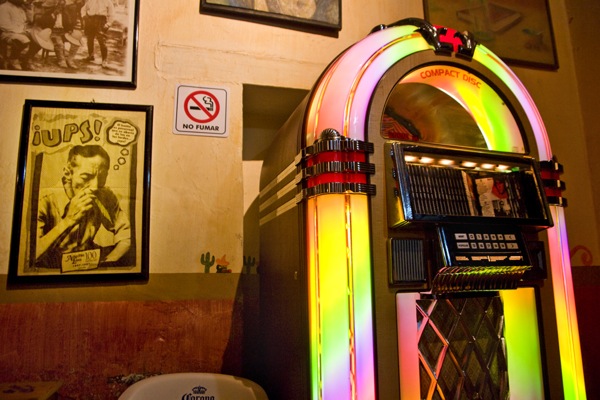 “What is the cantina?” I ask, using Jorge’s cell phone as a recording device. The responses range from anthropological analyses of social class to satirical commentary about the delicious chicharron and the refreshing beverages to a series of low, drunk giggles.

I go to the bathroom again. There is a heavy lock on this door, which the bartender opens for me with a rusty key. Apparently, it’s been awhile since a woman passed through these parts. At least they keep the ladies’ room locked until the moment arises.

Inside, there is a pink trashcan and the most basic of facilities. The walls are covered in spider webs. I wonder, tipsily, if those webs represent the lack of female presence in the classic cantina, or the gradual demise and transformation of the cantina itself. After congratulating myself on this deep thought, I symbolically brush aside a few spider webs and walk out again, sealing the lock behind me to keep the space safe for future females.

We move on to the next cantina. The streets feel buoyant with the intensity of the deepening blue light, or just with our beers and buzz. These streets are a labyrinth to me now; I rarely walk in these areas, far south of the Zocalo, where young women with scared faces hurry along with babies in their arms, and men swagger, and a certain weight and tension hang in the air.

There are knife shops and shops offering dozens of cowboy boots, and then after we wind through hold-your-breath-and-don’t-look-up alleyways, there are many, many cantinas. Most lack doors now and instead have open entryways giving onto fluorescent lights and the cacophony of drunk male conversation.

Gestures in these places are more flagrant. A man recognizes my friend Eleutario, and comes running and shouting out of a cantina to greet him. “El re-encuentro” my friends call it, laughing; bumping into that unfortunate acquaintance as you take another slug of Victoria. Caught caving into the beast.

This re-encuentro consists of the man embracing Eleutario with that unabashed male affection brought out by cantinas, and then, kindly, offering to show us his member for a photo op. He is halfway down the zipper when my scream-laughing, facing the other way, finally dissuades him. He gives another hearty slap on the back to Eleutario and we’re outta there, shaming and taunting E for the rest of the camino. 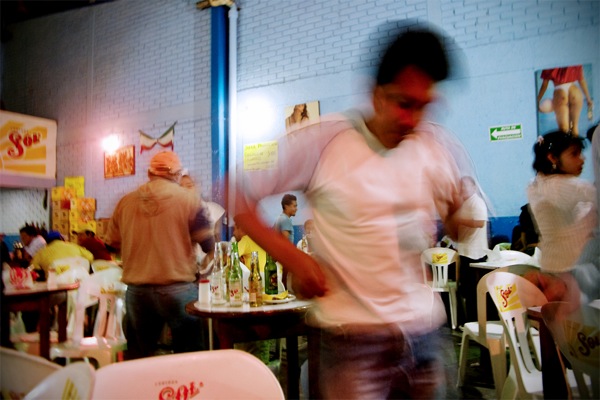 The next cantina is an aquarium full of bizarre species of drunken male. It is a large, open, cement-walled room crammed full of plastic tables, bathed in surreal blue and green light, and adorned only with a series of pornographic posters of blondes straddling motorcycles. The attire is jeans and greased-back black hair, and a certain sleazy type of half-smile directed at no one in particular.

I am not the only woman here, but I am the only one not working as a prostitute. Unfortunately, I have to go to the bathroom.

My posse of males—who, as bearded curators and rural teachers and arts photographers do not exactly fit the bill of cantina regular here—wait for me outside the “bathroom,” which consists of a cement toilet surrounded by a shower curtain. I am mid-stream, squatting over the toilet, when the curtain is suddenly yanked open.

“Hi!” says a prostitute in a skin-tight brown silk shirt and white miniskirt.

“Hi!” I try to answer lightly, as if we’re old pals catching up on the street and not a prostitute and a peeing American chatting in a cantina bathroom.

“Your country is beautiful, isn’t it,” she says, matter-of-factly. I consider this while trying to finish up as quickly as possible.

“My whole family is there,” she says, “in Los Angeles. It must be much nicer than here.” She sits squarely down on the seatless toilet and starts peeing without a second thought.

“Well,” I say, trying to make an exit, “I think Mexico has more heart.”

She shrugs in the darkness. “I don’t know,” she says.
.
“Well,” I say, not really sure if I should go on defending Mexico’s heart over the prostitute’s endless stream, “I guess I’ll see ya later.”

“Yup,” she says cheerily, “beer. Goes right through ya.”

I open the curtain and head out.

Tagged
Restaurants + Bars Mexico
What did you think of this story?
Meh
Good
Awesome