GROWING UP on a steady diet of movies like Full Metal Jacket and Platoon, my vision of Vietnam was defined by war and suffering. I knew Vietnam had so much more to offer, however, and went with an open mind. But as my plane descended through the clouds towards Hanoi, I felt an unexpected sadness at the sight of verdant rice paddies far below.

Half way into the trip I asked my guide Lan about the war: “It was a long time ago,” she said smiling. “We don’t forget about it, but we move on. Everybody just tries to make a nice life for themselves.” 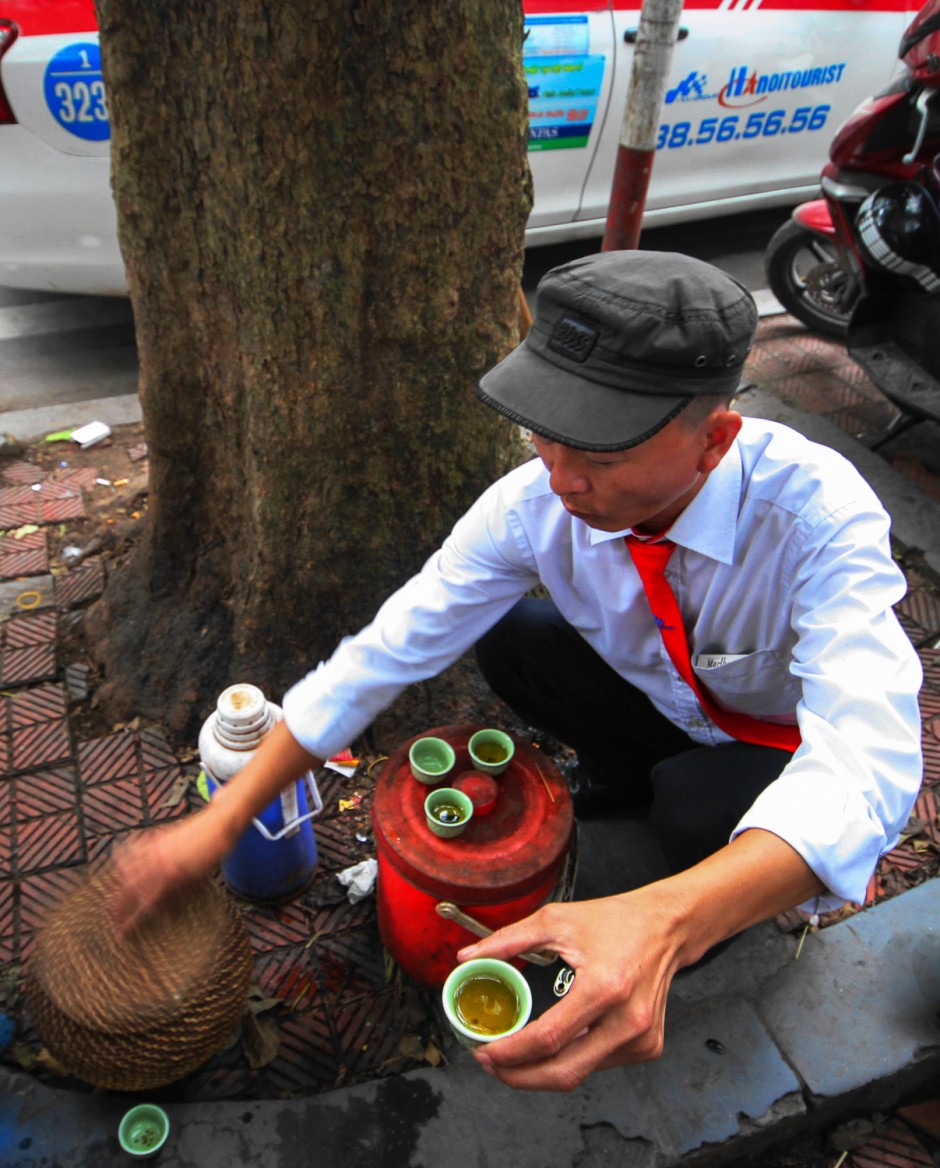 I’m seriously buzzed. Across the street from the brilliantly white, green-shuttered colonial-style Hotel Metropole Hanoi, I’m handed a small cup of green tea. Moments earlier, Song and his taxi driver friends (one pictured here) had exchanged my US$5 into dong, the local currency. After short introductions, one of the red-tied drivers handed me a bong-like bamboo pipe packed with tobacco. He motioned for me to sit on a tiny blue plastic stool. The four men then cheered me on as I did my best to clear the tower of smoke from the long tube. I failed miserably, stood up quickly, and found myself stumbling backwards and extremely light headed. The taxi drivers roared with laughter while patting me on the back. I have been in Vietnam for less than three hours. 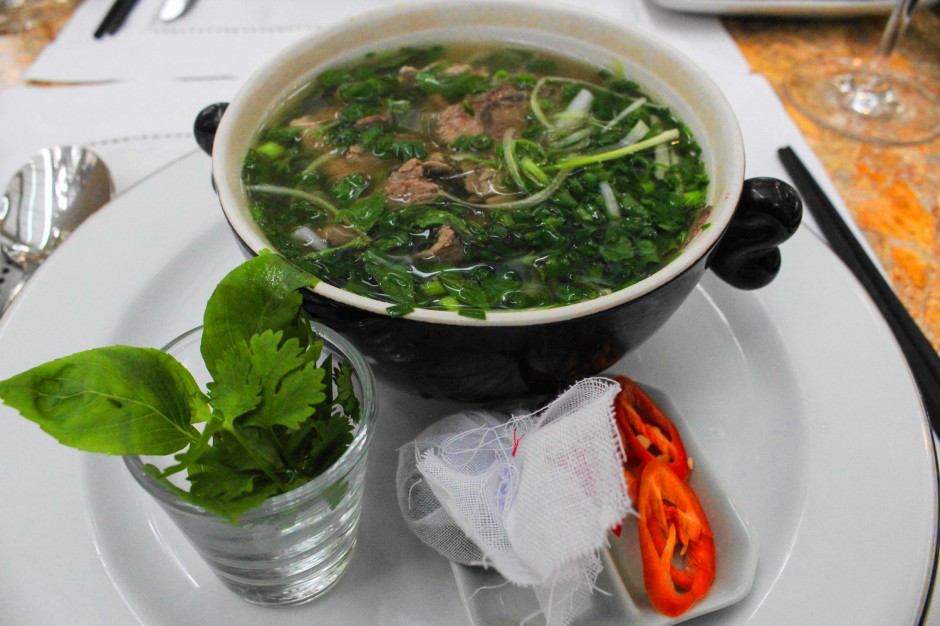 Under the tropical ceiling fans and curved French windows of LeClub Café in the Hotel Metropole, I order the Hanoi specialty: phở bò, an aromatic rice noodle soup with thin slices of beef and zesty green scallions. As with any good soup, it all boils down to the broth. Beef bones, onion, ginger, cinnamon, and cloves perform a mouthwatering symphony for the intertwined senses of smell and taste. Add to that the ever-present Thai basil, cilantro, lime, and chili pepper garnishes and you find yourself in your own personal dimension of culinary bliss. 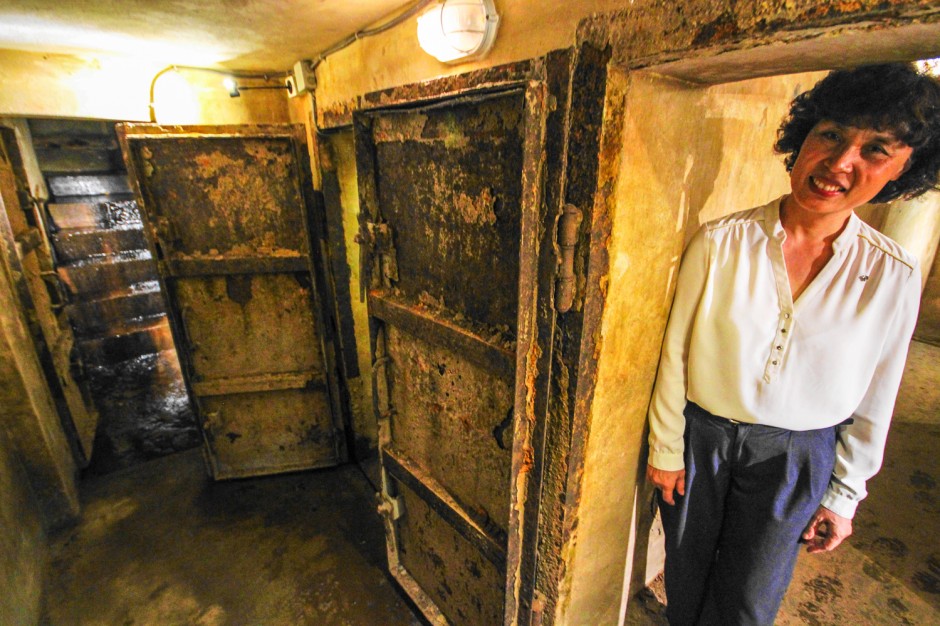 In 2011, the bomb shelter pictured above was rediscovered by the Metropole staff during renovations. It has since been reopened as the grand finale of the hotel’s “Path of History Tour.” During the Vietnam War, American anti-war celebrities Jane Fonda and Joan Baez took cover here during their respective stays. Our guide Yen (above), hands us green hard hats as we step into the low-ceilinged, musty bunker. “When I was a child,” she tells me, “I helped my parents dig bomb shelters under our beds. Then I went with the other children to a shelter in the mountains during the war.” Inside a narrow concrete room with water seeping from vents, Yen plays us Joan Baez’s “Where Are You Now My Son?” This sorrowful song was recorded at the Metropole during the Christmas bombings of Hanoi in 1972. The few moments listening to Baez’s recording—under a dim yellow light—are hauntingly surreal. 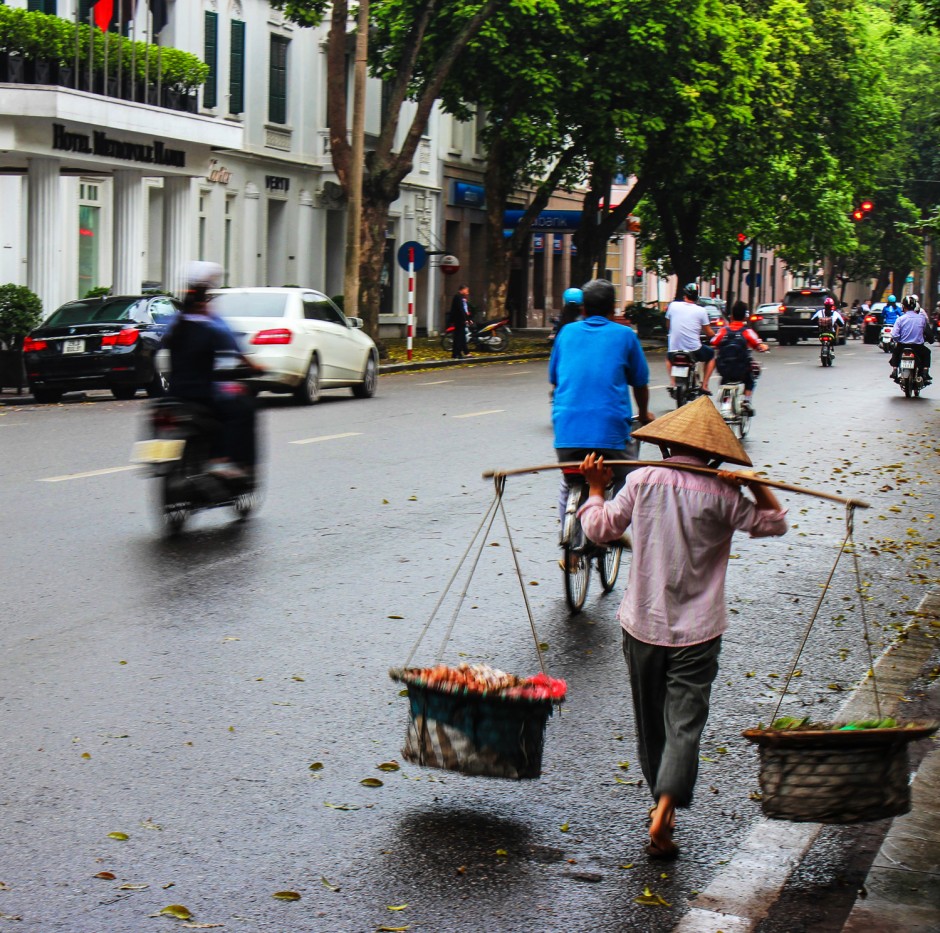 On a damp morning in Hanoi, a rural woman’s traditional conical hat and shoulder pole contrast with a city sprinting towards modernity. Economically, Vietnam is booming. It’s among the “Next Eleven,” a list of rapidly emerging economies throughout the world. During my time in Hanoi, I witnessed shiny new BMWs, Mercedes, and even a Rolls Royce charging through herds of commuters on creaky old bicycles and buzzing scooters with three or four people crammed onto a seat. 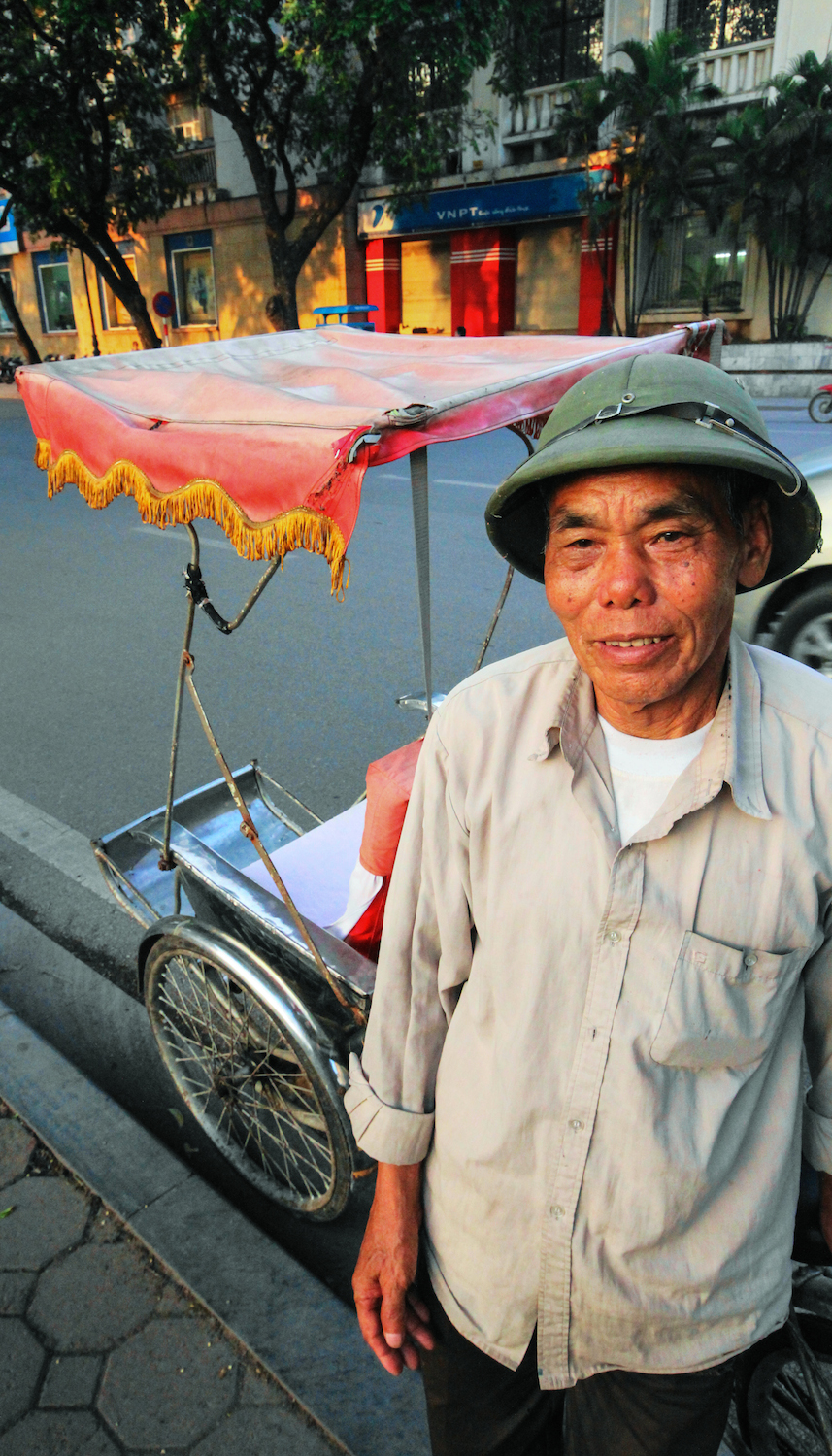 It’s 6:30am on a Wednesday. The infectious rhythm of the '90s hit “La Macarena” echoes down sidewalks filled with noodle-soup-slurping breakfasters seated on tiny plastic chairs and stools. I follow the clave beat until the narrow street spills onto the wide boulevard that encircles Hoan Kiem Lake. On a corner, the music’s source reveals itself—a dozen middle-aged women dance in unison to the Spanish one-hit wonder. They clap their hands with hips swaying and return my smile as I pass. On the pathways around the lake, people jog, walk, stretch, and practice Tai Chi. One stocky man in blue and red kickboxing shorts spars with a sign post. “Amazing isn’t it?” a man next to me says in an Australian accent. “We spend a fortune on gyms and look, with all they’ve been through, here they are getting on with it. I think in the West, we may have lost the plot.” In the photo above, my cyclo driver poses with his ride after peddling me around Hoan Kiem Lake. 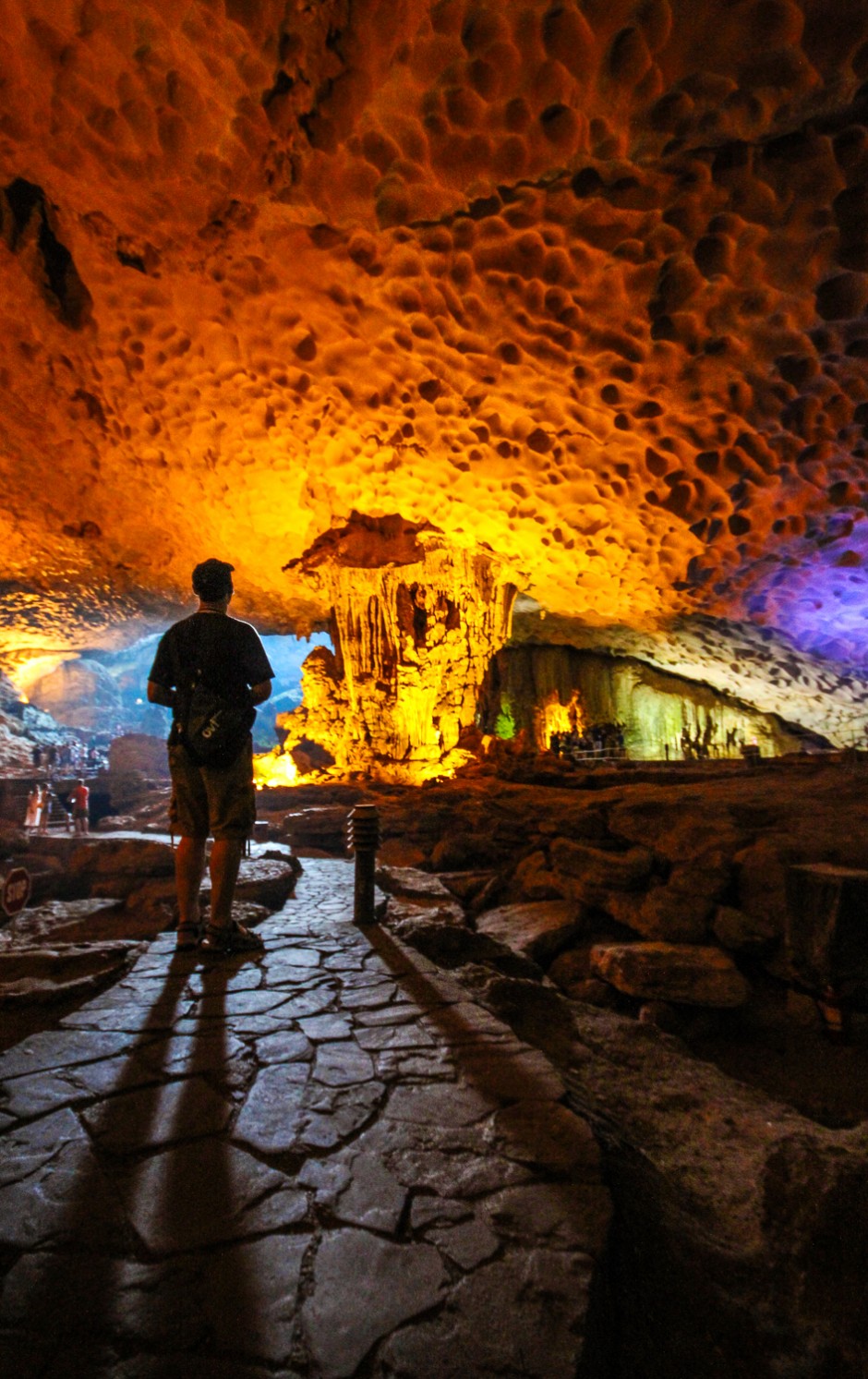 The hissing cicadas are deafening as I march up stone steps high above Ha Long Bay. It’s magnificently hot and sweat pours down my face. Among a throng of tourists, I’m on my way to the mouth of Surprise Cave on Bo Hon Island. Made from limestone, it consists of three chambers, each bigger than the next as you continue deeper. Inside, colorful lights display various stalactites and formations that evoke animals, people, and of course a giant phallus, as the tour guide affably points out. In this photo, a fellow traveler stops to admire the expansive ceiling in the cave’s final amphitheater. 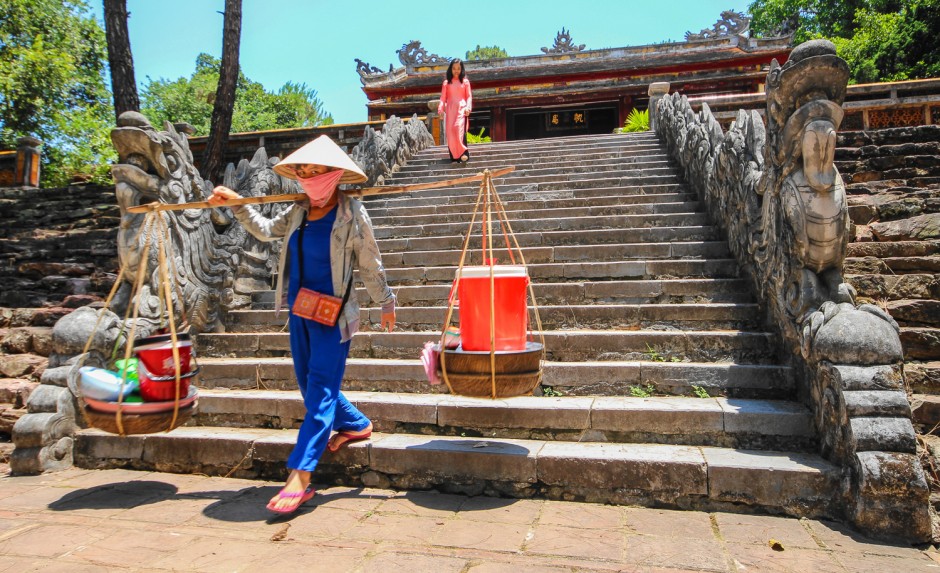 The Tomb of Tự Đức was built over a three-year period, from 1864 to 1867, for the Nguyen Emperor Tự Đức. A sprawling compound of over 50 structures set amidst a pine forest, the site was not only designed as a burial ground but also as a residence. Despite having 103 concubines who lived with him inside the complex, Tự Đức died in 1883 without fathering an heir. Above, a woman carries her goods down one of the numerous dragon-sided flights of stone steps at the tomb. In the background our guide—and Hue native—Lan, wears her áo dài, a traditional Vietnamese silk outfit. 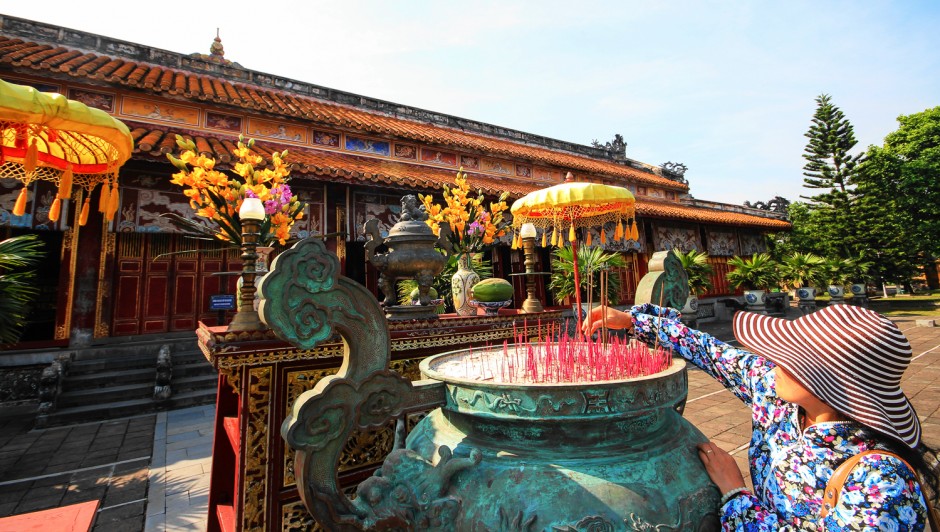 A woman lights incense before praying at Thế Miếu Temple within the walls of Hue’s Imperial City. The enormous collection of 160 buildings set along the Perfume River was built in 1804 by Gia Long, and the Imperial Enclosure inside housed the Nguyen Royal Family. During the Tet Offensive of 1968, the compound suffered massive damage and only ten structures remain today. Walking around the vast site, I find bullet-pocked walls. 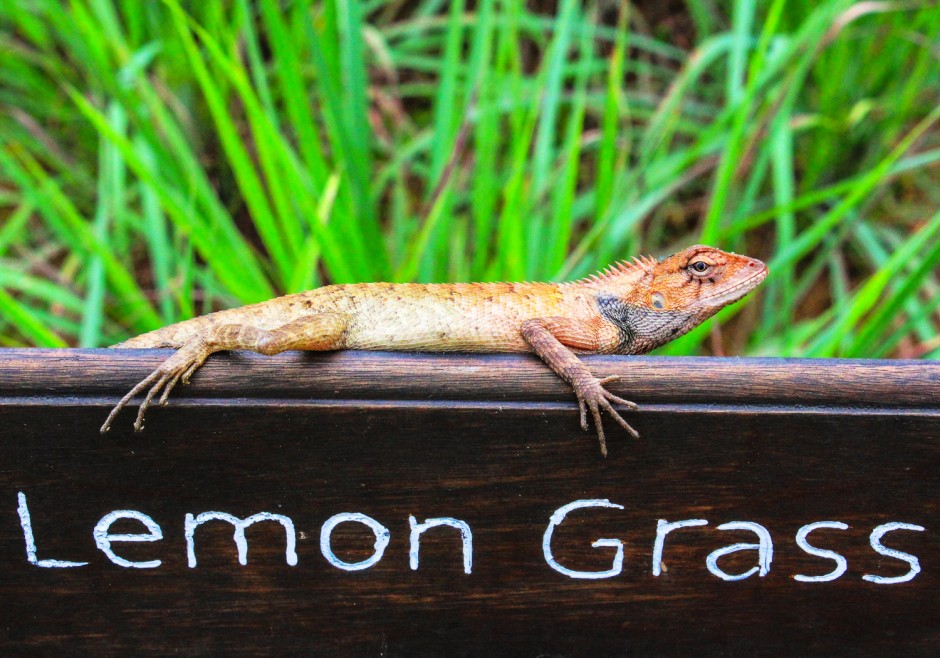 In the herb garden of La Residence Hotel in Hue, a lizard basks in the morning heat. Hue, the home of the Nguyen Dynasty from 1636 to 1872, has an abundance of local specialties, as the royal family demanded a constant stream of innovative dishes. The hotel’s aptly named restaurant, Le Parfum, serves inventive cuisine in a beautiful art deco setting overlooking the Perfume River. At dinner I order the Vietnamese tapas, a captivating display of jellyfish salad, fresh spring rolls, and a variety of bite-size steamed rice cakes topped with dried shrimp, pork, and green onions. A collage of savory, sweet, and simply undefinable flavors makes it the most intriguing dish of my trip. 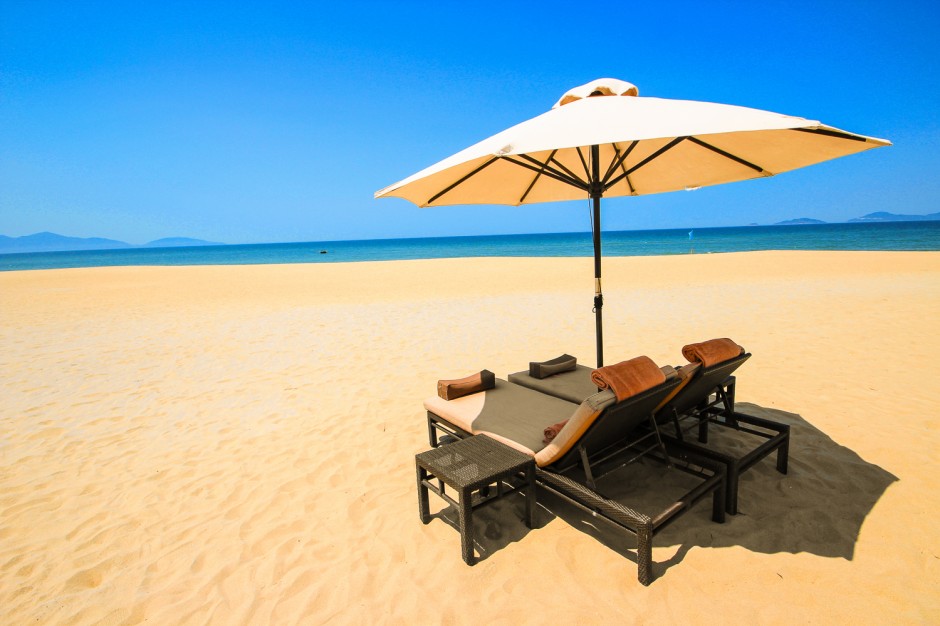 Golden sand, a calm blue sea, and a slight breeze to cut the brilliant heat. On Vietnam’s central coast, the Nam Hai Resort in Hoi An is a dreamscape of low profile villas set amongst coconut trees overlooking China Beach and the Cham Islands. Although touted as the most expensive beach resort in Vietnam, the atmosphere at the Nam Hai is low key and serene. 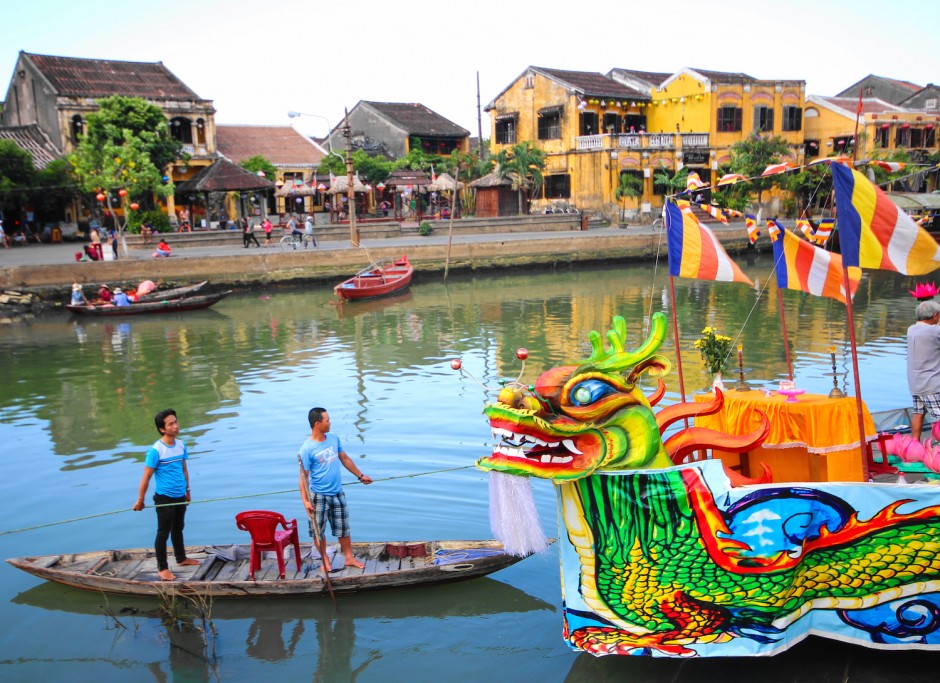 Near the An Hoi Bridge, locals put the finishing touches on a striking float in celebration of Buddha’s Birthday. In 2014, his birthday was celebrated on May 6th. Bright pink lotus flowers and colorful paper lamps marked the occasion in every city I visited. 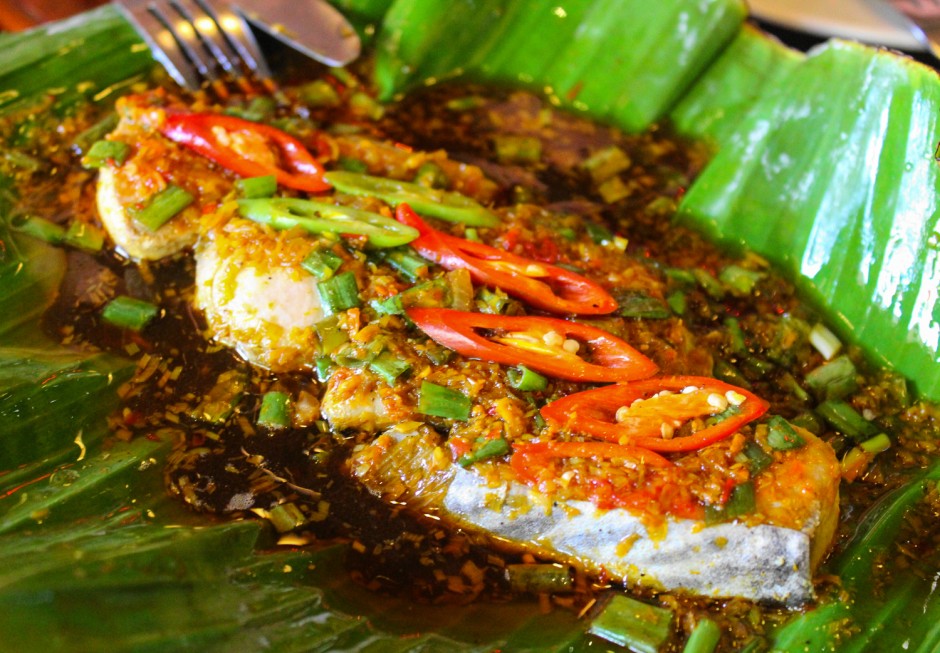 “Vietnam is changing very quickly. People used to dream of having a scooter or a car. Now they can actually own one,” Nathan, the co-owner of Miss Ly’s Café in Hoi An, tells me. Originally from New York, he’s married to Ly, who does the cooking inside her mother’s centuries-old house turned cozy restaurant. From the adjacent kitchen, Ly churns out fresh Hoi An specialties like fried wontons and white rose dumplings. Above, a plate of local grilled fish with chili and herbs is unwrapped from a banana leaf. Tangy, spicy, moist yet with a perfect char, it’s possibly the best fish I have ever had. 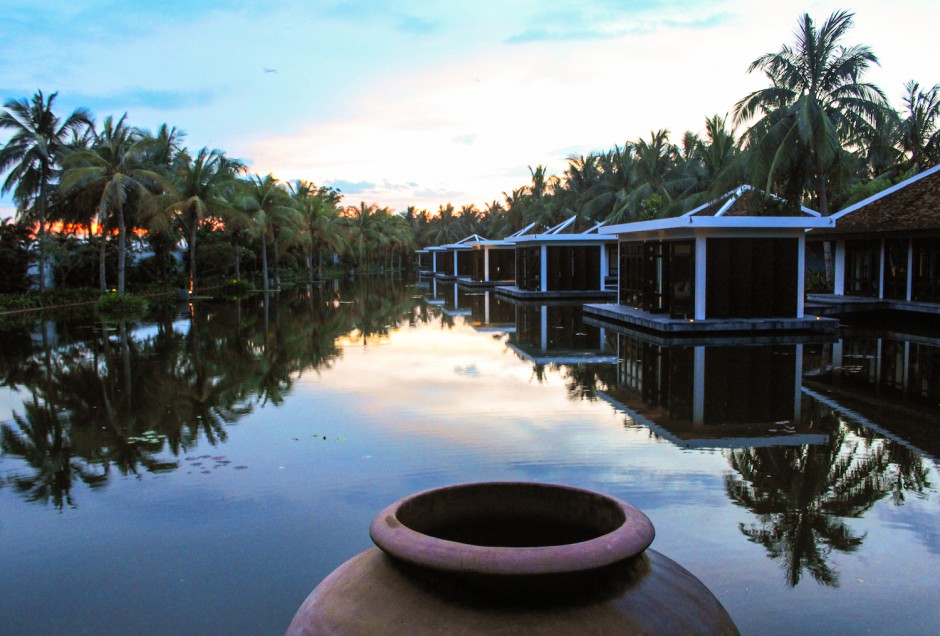 In the absolute calm of a sunset moment, I look over the pond at the Nam Hai Resort’s spa. Having just had an hour-long Vietnamese Massage in a waterside room, my mood matches the scene. Walking back to my villa, I get the sensation that I’m floating through the humid, sultry air and decide that anything other than a nap would be blasphemous. 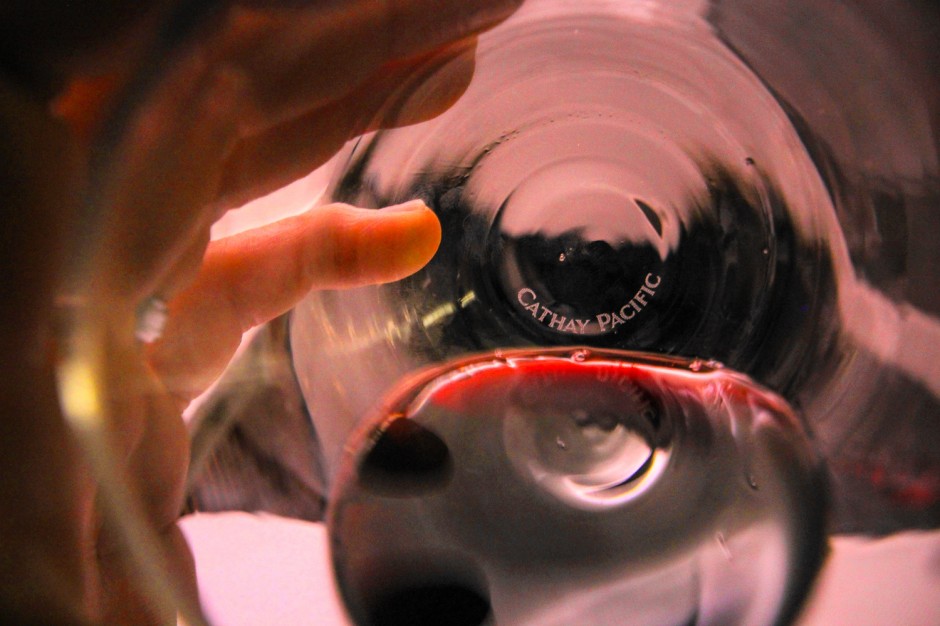 From LA to Hong Kong to Hanoi and back again, I flew with Cathay Pacific and their partner Dragon Air. In Cathay’s business class, stewardesses in impeccable red skirts and white blouses attend to your every need. Pale and strange-smelling airplane food was nowhere to be found, as I was served fresh Dim Sum, Wok Seared Halibut, and a silky smooth 2011 Cheval Noir Saint-Émilion. It was the first time in my life that I almost didn’t want to get off the plane. 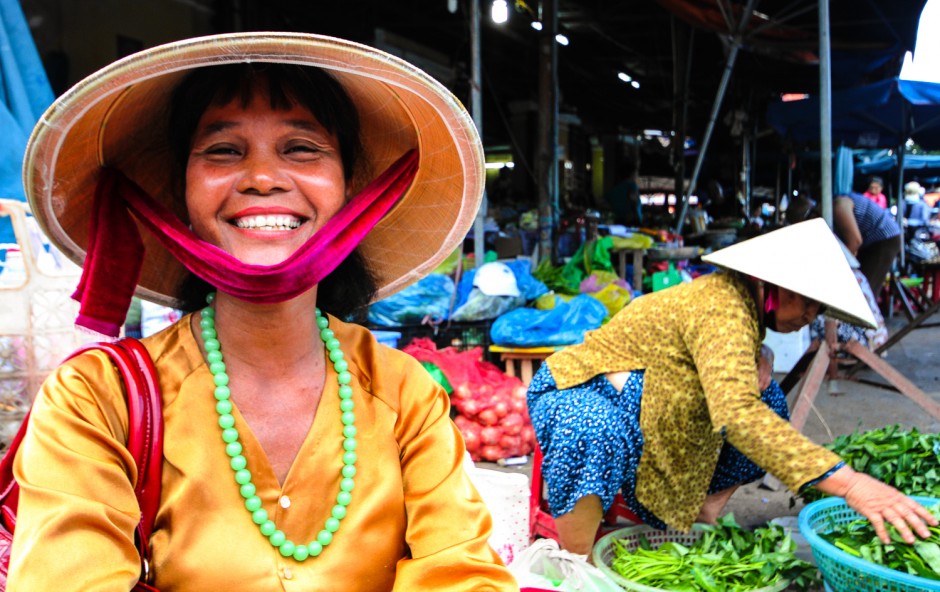 In the remarkably preserved “old town” district of Hoi An, an ancient port city with Chinese architectural influences, a stylish vendor at the market meets my camera with a wide smile. Nearing the end of my trip, it was a gesture that I had grown accustomed to while in Vietnam, where the majority of people smiled, laughed, or even posed for a photo. Initially I found this endearing, lighthearted playfulness perplexing in a country with such a tumultuous past. Nevertheless, on my flight home, with the scents of lemongrass and ginger still tingling my nose, I found myself smiling for no reason. The vibe was contagious.

In Ha Long Bay, Vietnam, Floating Markets Bring the Supermarket To You