Editor’s note: Award-winning Canadian photographer Jeff Friesen has managed to retain a child-like wonderment in the face of his home country’s landscape through his majestically titled series, The Canadian: Ghost Train Crossing Canada.

“Endless pockets of wonder await your discovery in a country big enough to hide mountain ranges.” Friesen says. “Considering Canada is 8,000km (5000 miles) wide, it’s amazing how many people set out to cross the country from sea-to-sea. With so much ground to pass beneath you, this is one pilgrimage where the journey truly is the destination. Whether by car or bicycle, train or canoe, travelers form their own river running across the landscape. Like a river, these travelers are forever shaped by the country they pass through.”

Friesen didn’t choose a traditional mode of transport to depict the journey across Canada. “My own cross-country exploration is done by taking the train, but not in the usual sense…I carry the train rather than it carrying me. It fits into a shopping bag from Mountain Equipment Co-Op.”

Complimented by the epic Canadian backdrop, Friesen and his miniature trains get to the heart of the Canadian terrain. 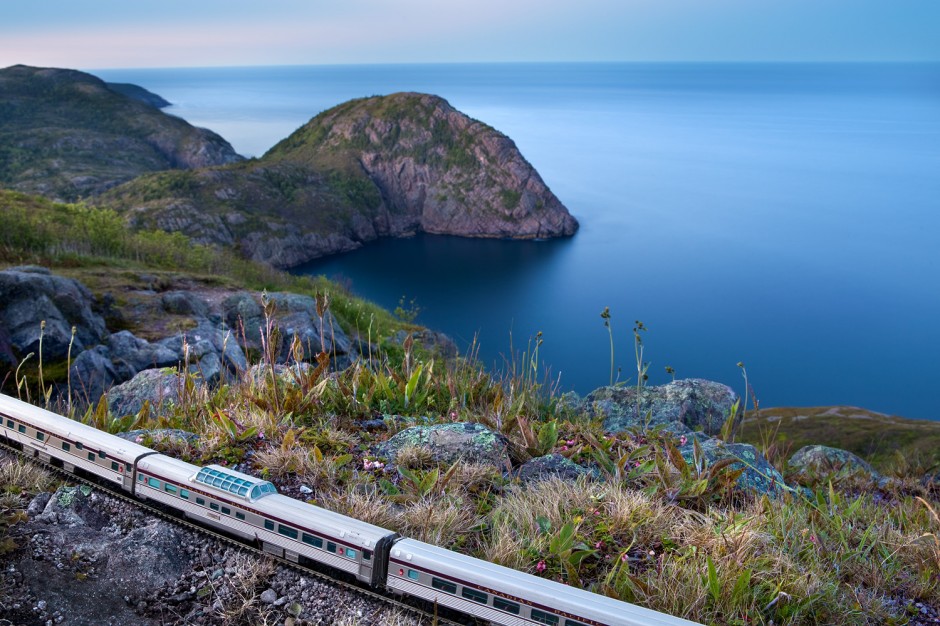 Newfoundland is known for colorful place names, and Cuckold's Cove is a safe introduction to that.This photograph marked the end of a June day filled with whales and birds and every type of weather. 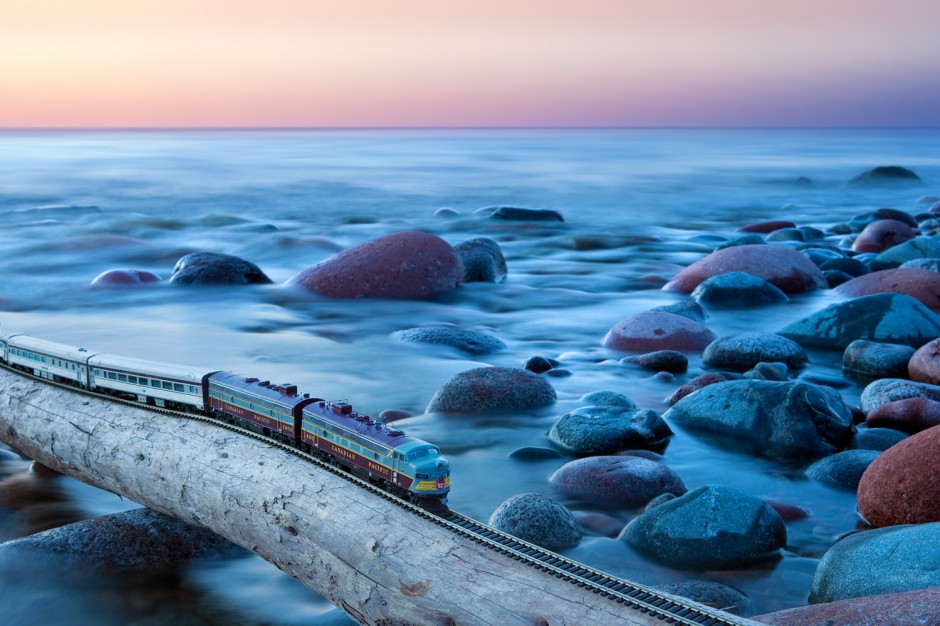 I like to imagine The Canadian emerging from the water after crossing the ocean from Newfoundland.A disaster struck shortly after this peaceful-looking photograph was made. While I was dissembling the train, a couple of the rear cars fell into the water. It doesn’t quite show in the photograph because of the slow shutter speed, but a fast moving stream is emptying into the ocean below the log. 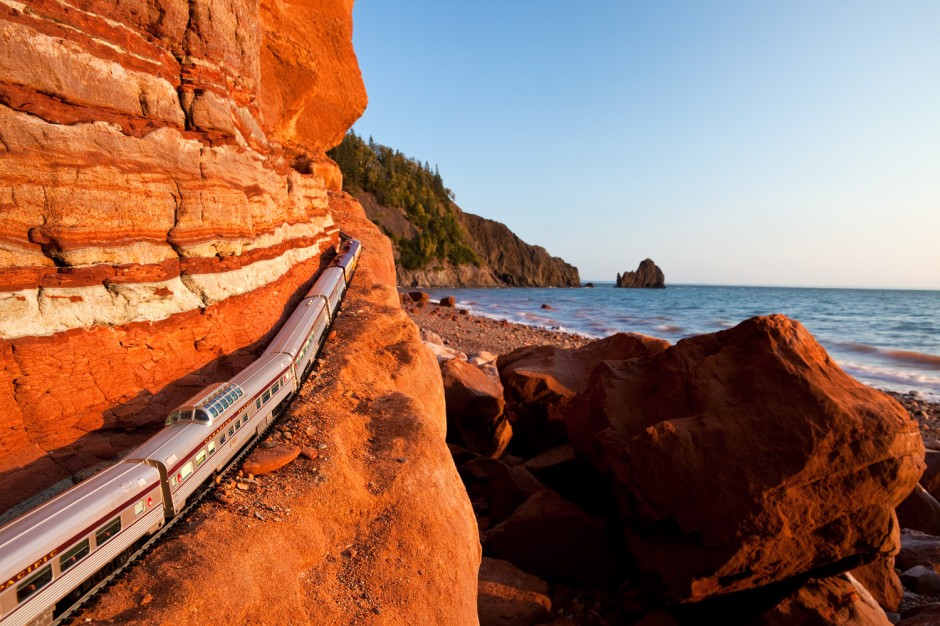 Red rock landscapes are rare in most of Canada, but they are fairly common in Nova Scotia and Prince Edward Island. Here at Five Islands Provincial Park, the world's highest tides provide a dynamic backdrop for The Canadian. 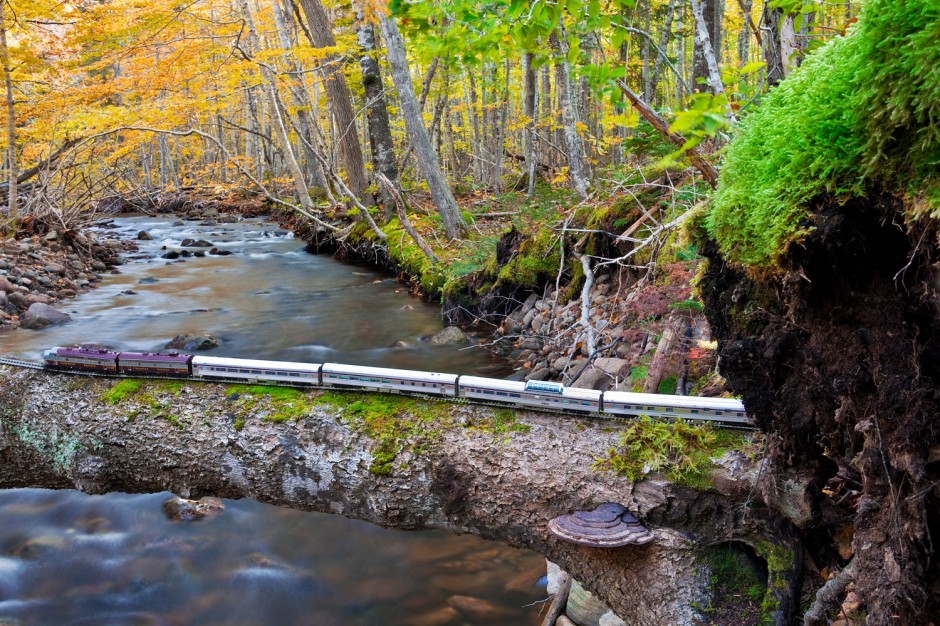 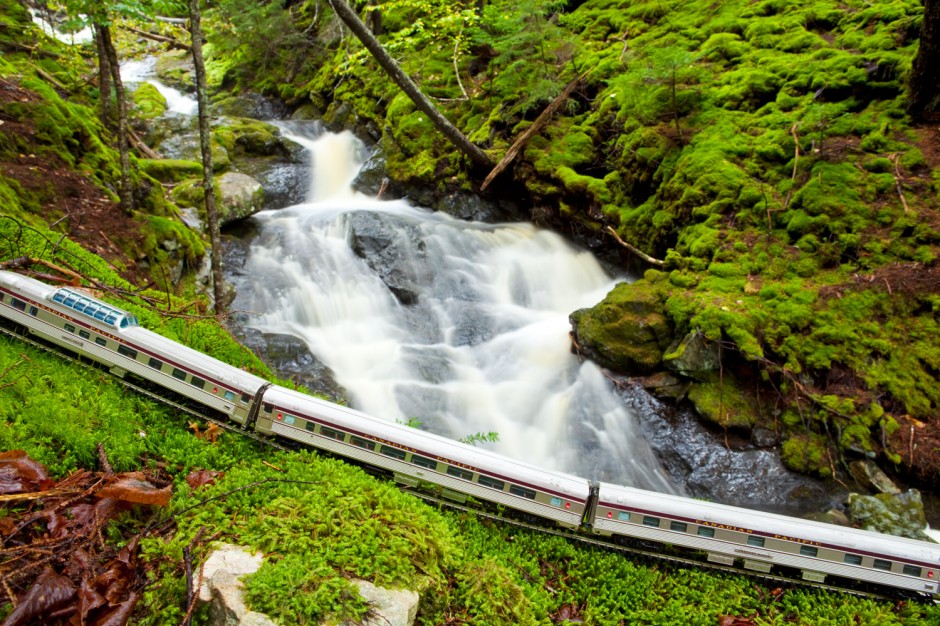 A little valley next to the Bay of Fundy glows green from constant moisture. The Canadian looks at home in this fairytale landscape.The combination of moss and mist absorbs sound, giving a surreal sonic atmosphere to the fog forest. 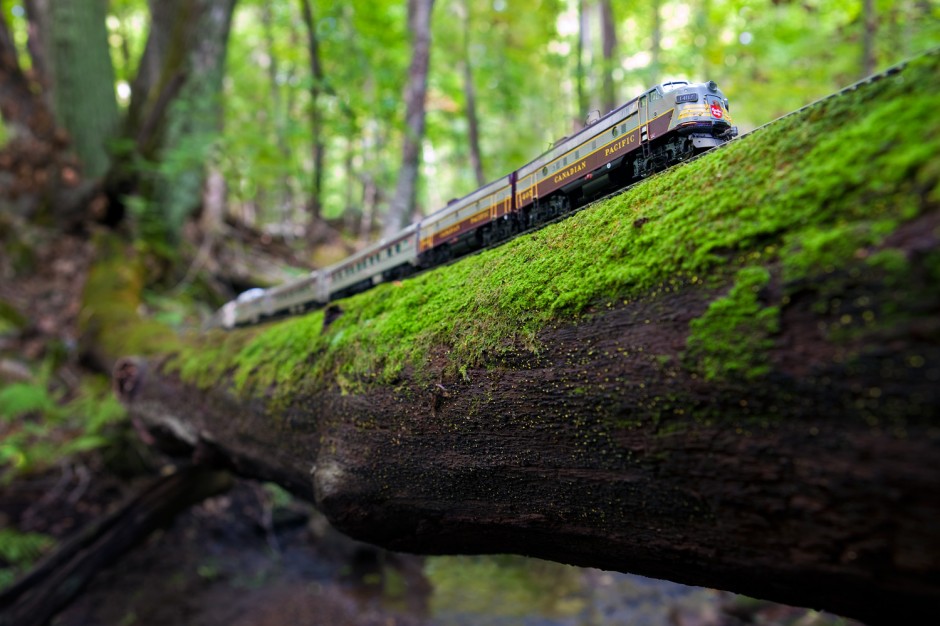 The Canadian makes a high crossing in La Mauricie National Park.It is always difficult finding enough flat ground to set up The Canadian, and I am grateful for fallen trees. 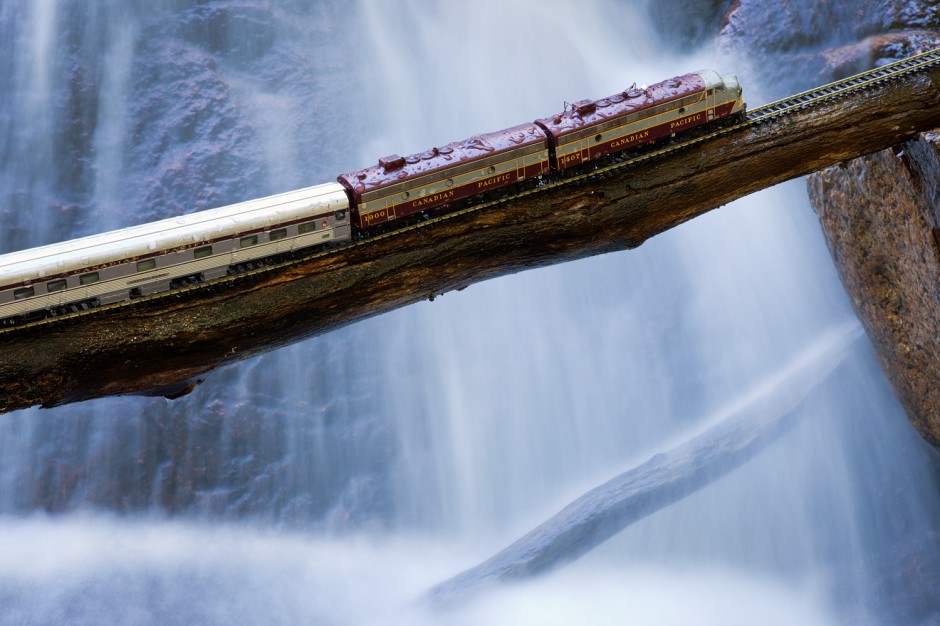 The Canadian train makes a perilous crossing at Luskville Falls in Gatineau Park.There is an attraction to having The Canadian encounter dangerous situations, but it is always nerve-racking. (This model Canadian was made in limited-edition and they are sold-out). 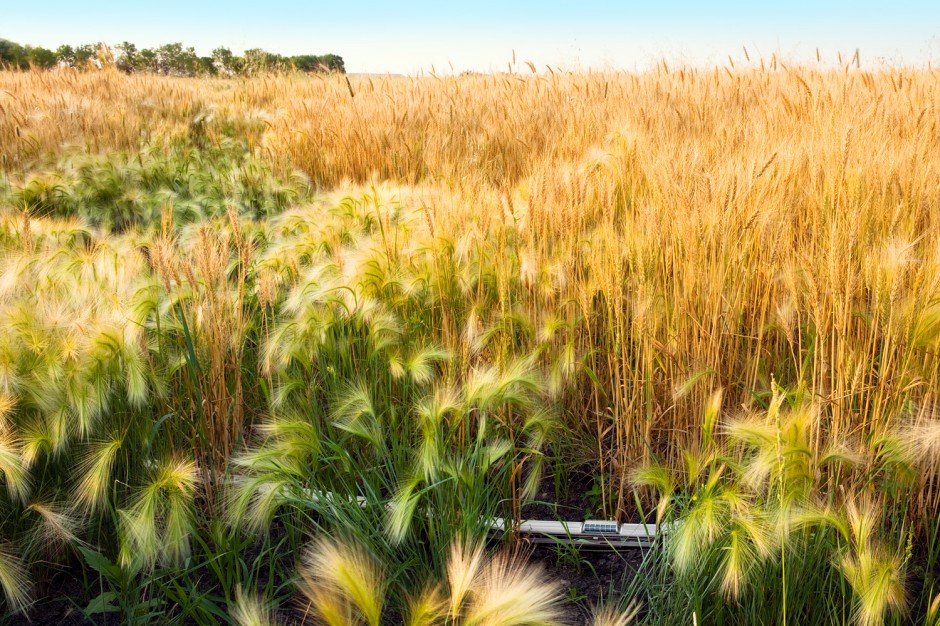 Wheat and foxtails appear to brush the sky with glowing honey light.This is the landscape I grew up with, a horizon so big it could lead you anywhere—and it’s never long before you hear the sound of a passing train in the distance. 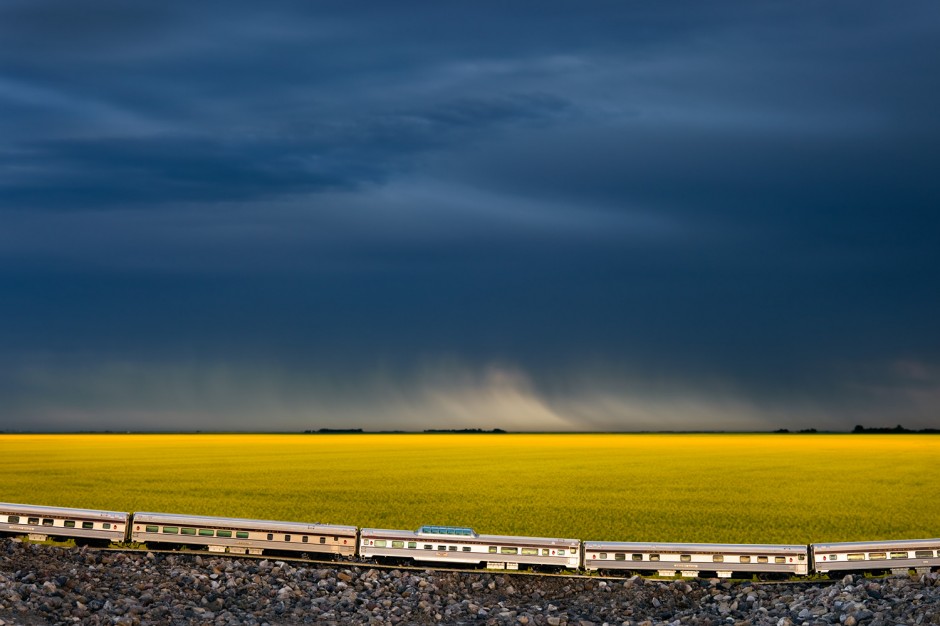 When you're from the prairies, the sky becomes your landscape. There can be several weather systems swirling across the sky simultaneously, making an unlikely mix of sunny summer skies and storm clouds as seen in this photograph. 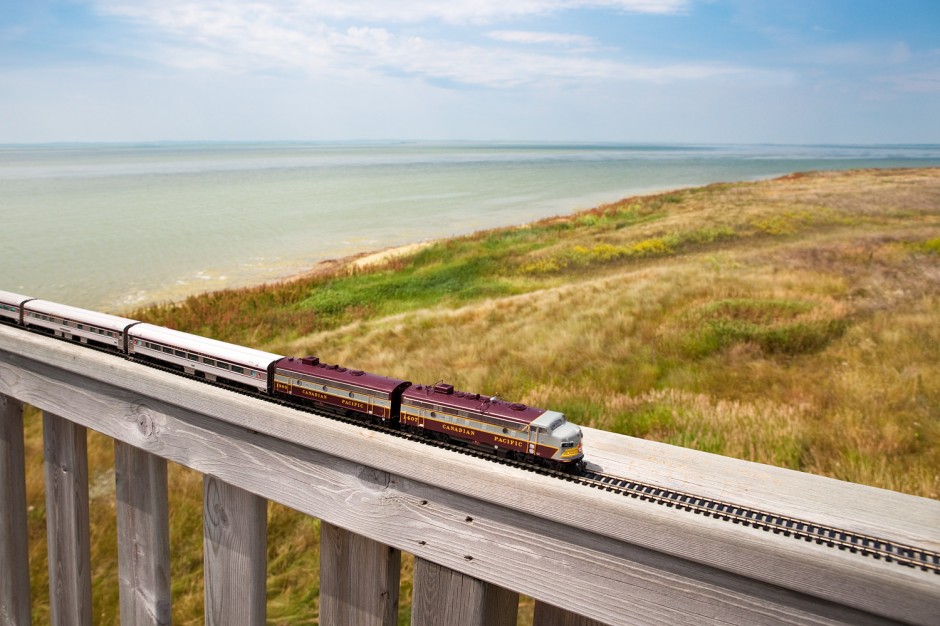 A bird-watching tower rail becomes a soaring viaduct for The Canadian.It’s always a surprise to discover sea-like Chaplin Lake in landlocked Saskatchewan, but there it is right beside the Trans-Canada Highway. 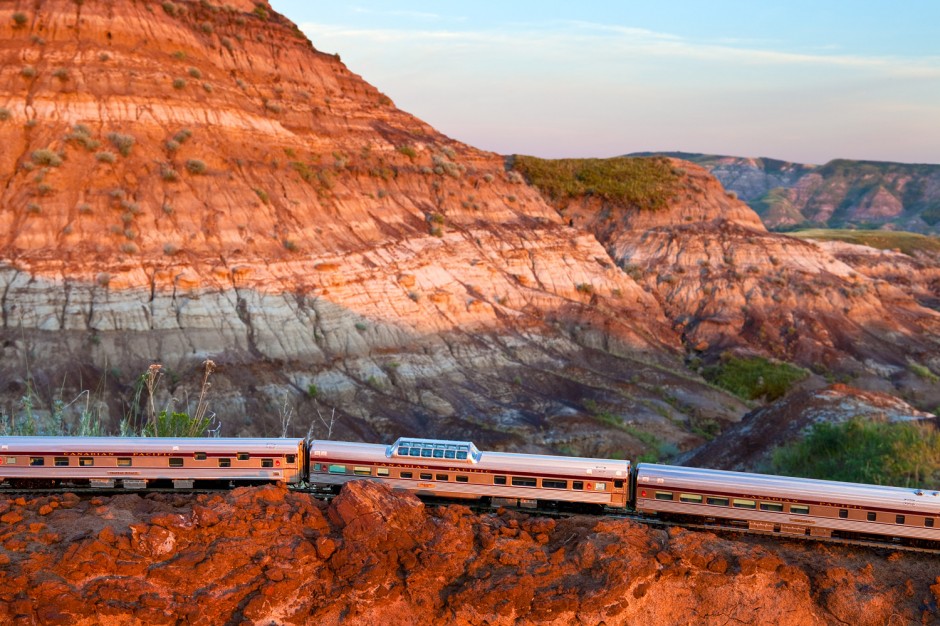 At the last moment of a prairie sunset, The Canadian rolls across the otherworldly landscape near Drumheller, Alberta.While the dinosaurs that walked here are now fossils, there are still Jurassic mosquitoes to contend with. 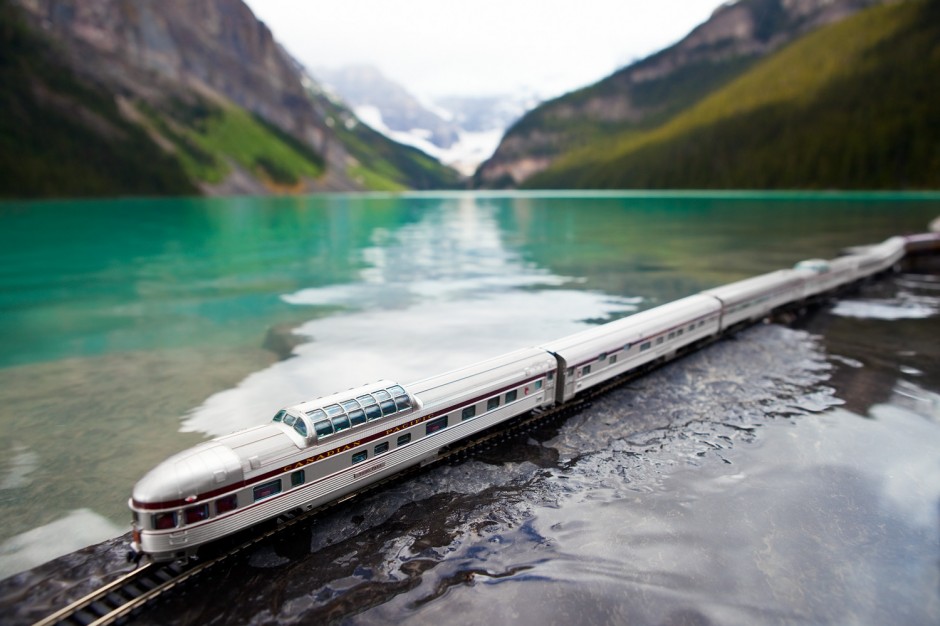 The Canadian attracts attention when it is set up where other people happen to be. Here it passes through the most photographed landscape in Canada, Lake Louise in Banff National Park.There are a large gaggle of tourists behind me admiring and photographing the train. I’m always glad to see people’s delighted reaction when they see the model Canadian in the landscape. 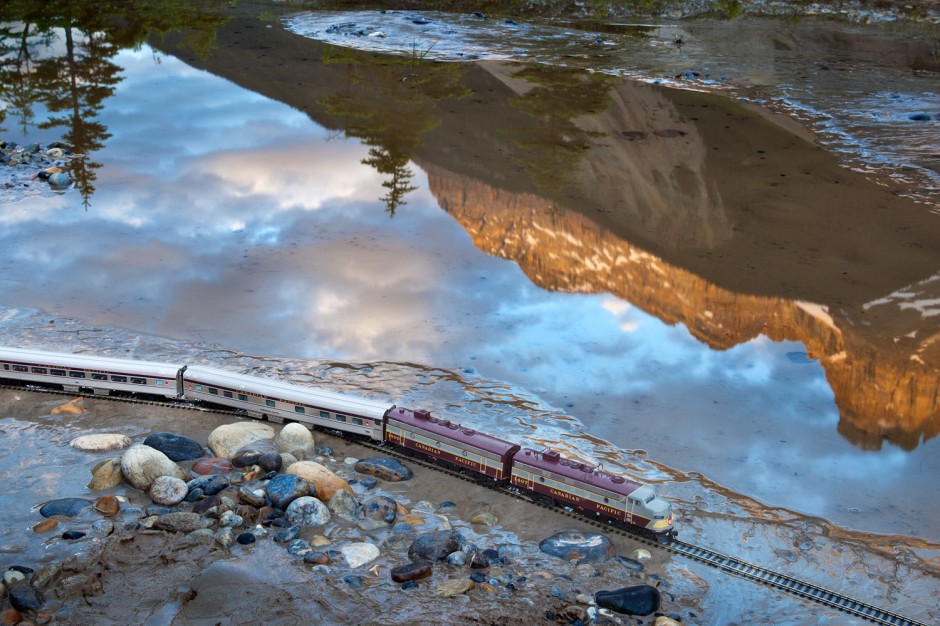 High up in Yoho National Park, intercontinental trains make their way over the Great Divide. The famous spiral tunnels through the mountains are not far from here.The low rumbling of train engines is a constant presence in this mountain valley, but The Canadian passes by silently. 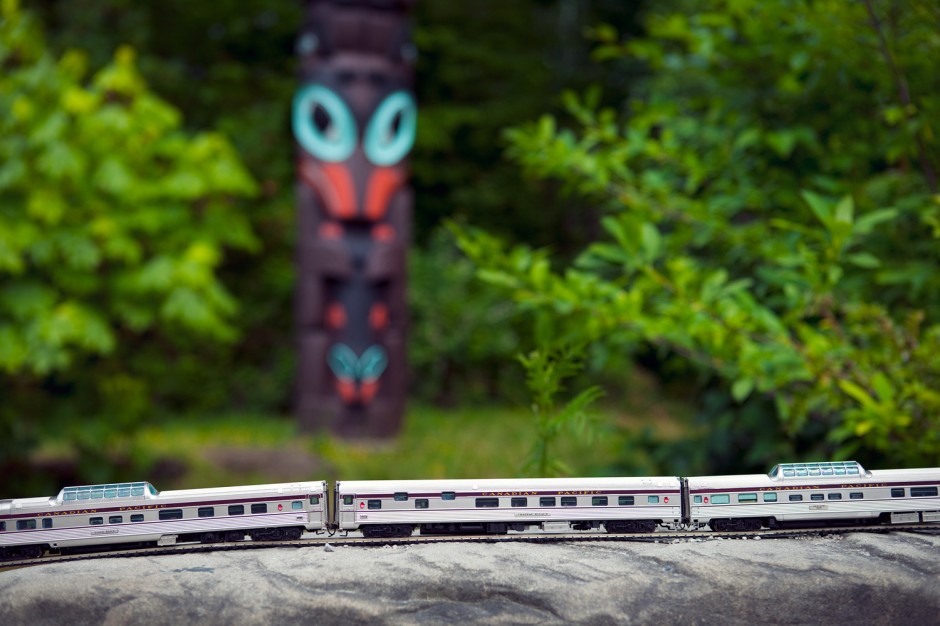 The rainforest watches The Canadian's crossing in Vancouver's Stanley Park. 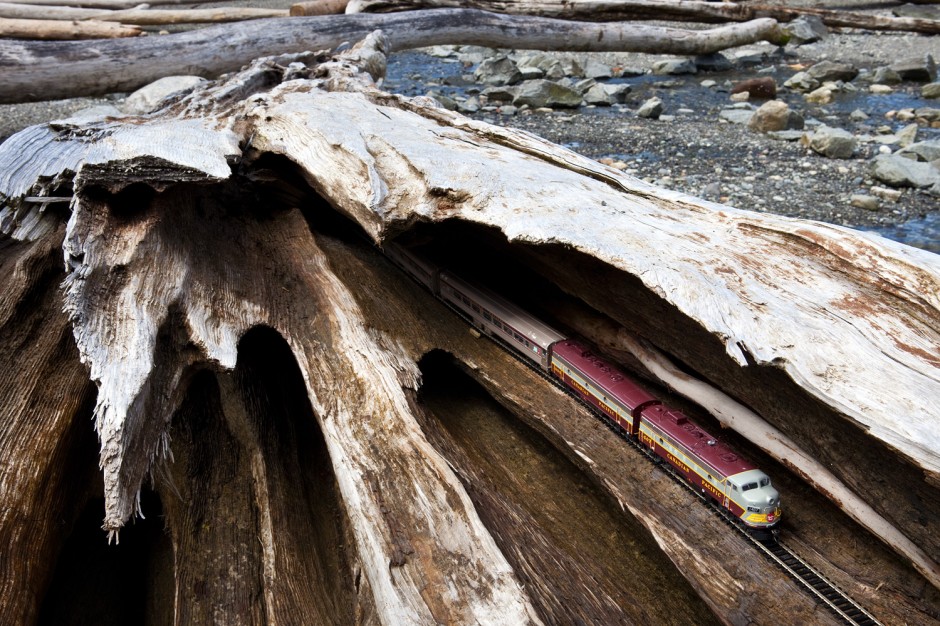 The Canadian avoids giant seagulls by passing through hollow driftwood in Howe Sound. 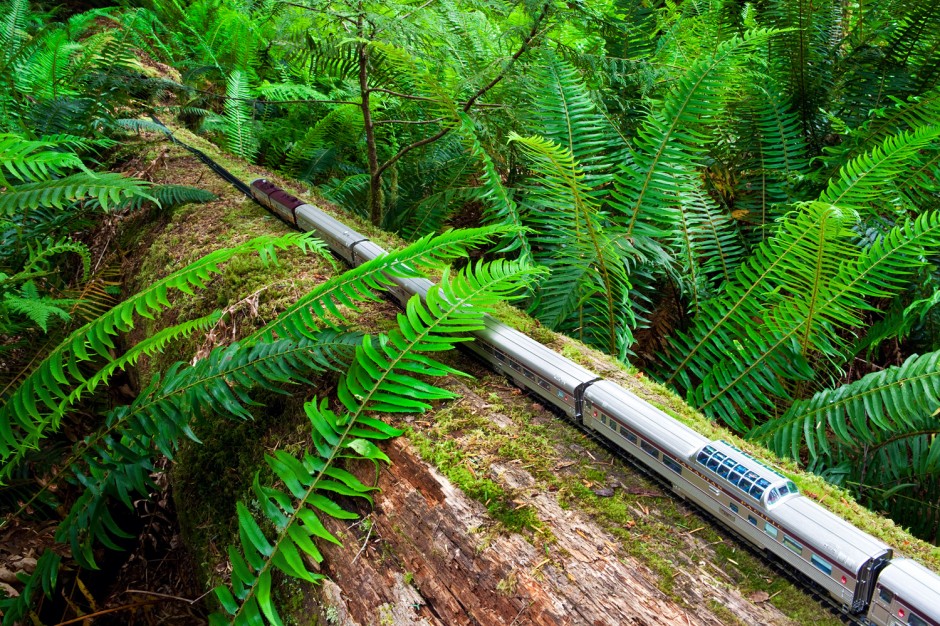 Cathedral Grove is a small protected area of ancient Douglas fir trees in central Vancouver Island.The 800-year-old trees create an atmosphere of reverence. Their old age seems mythical, but is the simple result of a seed that sprouted around the year 1200—too long ago to properly comprehend.

Tagged
Art + Architecture Canada
What did you think of this story?
Meh
Good
Awesome