WHEN I LANDED in Pyongyang, Democratic People’s Republic of Korea (DPRK), I immediately had to hand in my mobile phone. From that moment on, we were always accompanied. No one was allowed to leave the hotel without a guide.

There were many times when I was not allowed to take photos, particularly of anyone dressed casually or performing manual labor, and at military checkpoints. I had my camera confiscated twice and my pictures examined and discussed at length, but each time, my camera and photos were returned intact. 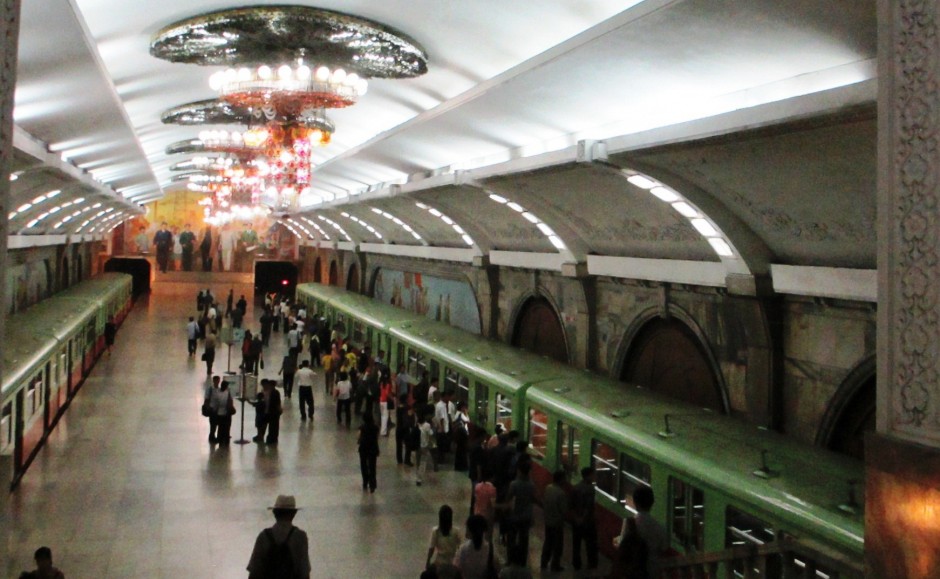 We were told that nearly 400,000 people are supposed to ride the underground railway system (the MTR) each day. I didn’t get it -- there seemed to be at least 300,000 in our carriage alone, holding themselves very upright and breathing in. The train lines are 110 meters underground, supposedly the deepest in the world. People read their weekly dose of propaganda newspapers on stands on the platforms, and apparently students study in the stations because the temperature is regulated. These deep tunnels are really bomb shelters to protect the citizens of the DPRK when the world finally implodes. 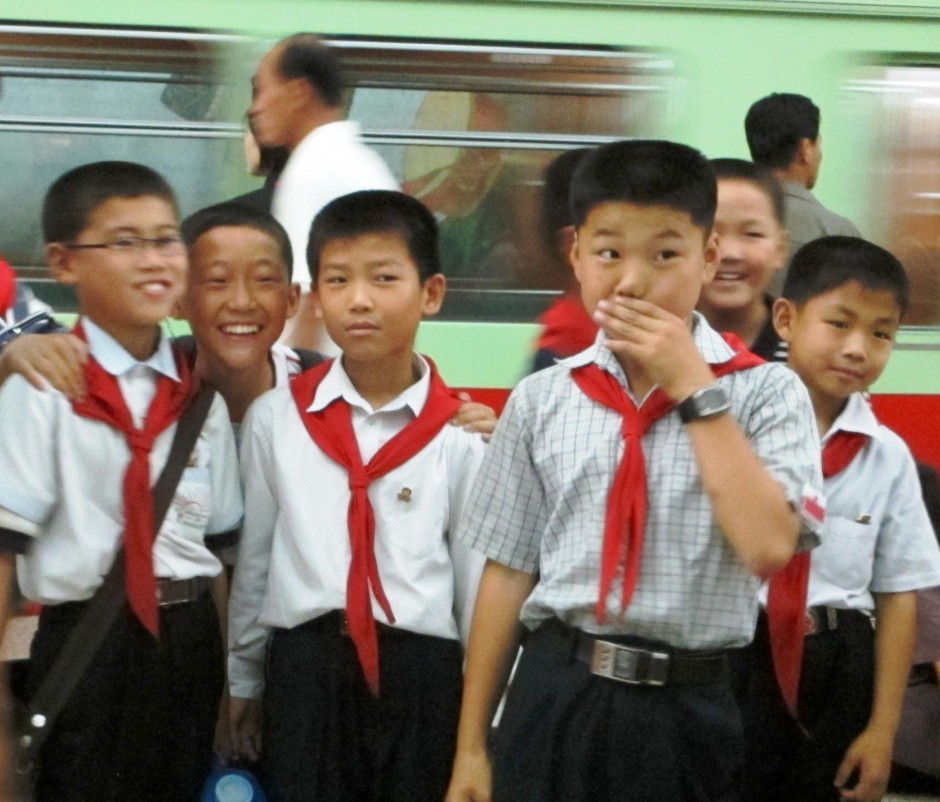 Children at the underground

Most children we saw wore school uniforms, even on Sunday, the only day off. Like children everywhere, these boys waiting for the next train enjoyed having their picture taken and loved seeing what they looked like afterwards. This picture caused much hilarity, teasing, pushing, and shoving.

When we arrived at this summer camp, it was almost deserted, except for this last group of children marching off. We were required to walk around and admire the facilities, which included a very large collection of stuffed animals and large portraits of the Dear Leaders on the dormitory walls, keeping an eye on the children while they slept. I even recall a globe with a reunited Korea as the center of the universe. 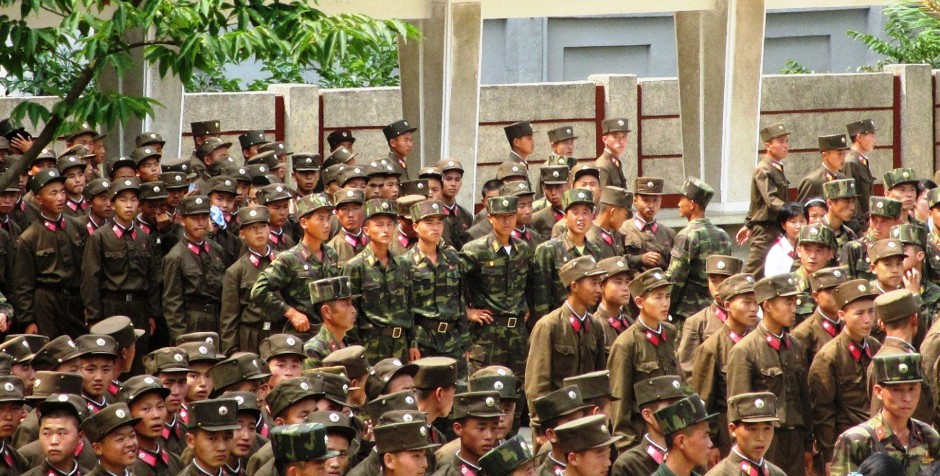 It was the 100th anniversary of the birth of Kim Il Sung and a major celebration was planned at the site of the Sinchon massacre which, according to the DPRK version of history, had been carried out by the “American-Imperialist-Bastards.” Americans were always described in this way. Likewise the “Evil-Cunning-Japanese.” This was slightly amusing to start with, but ended up just tedious. This was one of the few times we were allowed to take photos of the military. 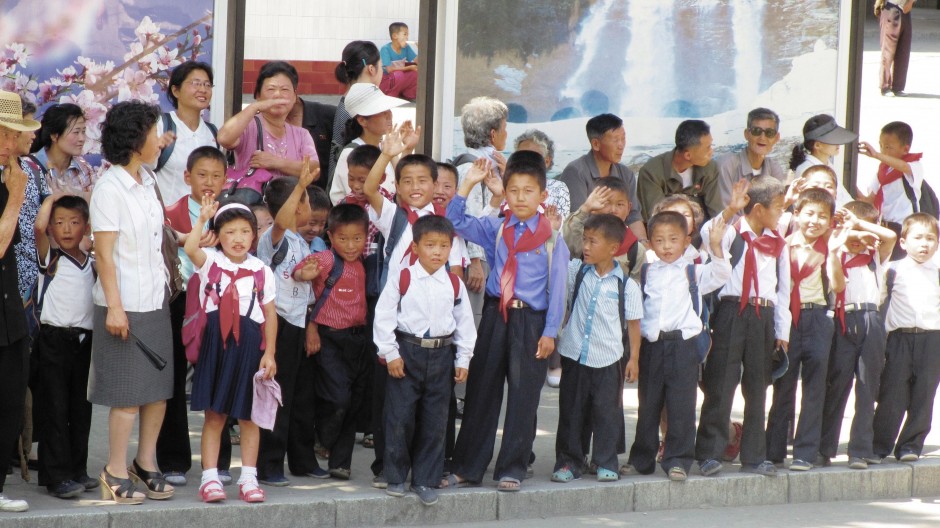 Schoolchildren waiting for the tram

People on the street would often start out ignoring us, or observing out of the corner of their eyes. But if I smiled and waved, they would often wave back, even those in military uniform. The less chance there was that I could engage them in conversation, it seemed the more adventurous they were. In the seven days we were there, though, there were only two instances that people spoke to me spontaneously in the street. 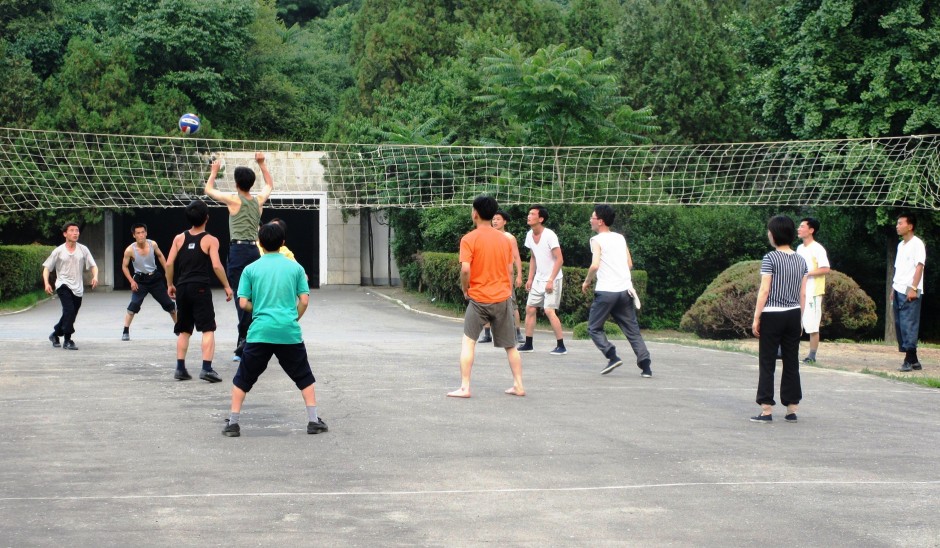 Volleyball in the park

Sunday is known as Dating Day, the only day to relax. Otherwise, every minute of the day is organized from 7am until around 10pm. If you aren’t actually at work, then you should be studying, or attending lectures, or planting trees, or watering trees, or picking up stones. When I asked about the people I saw picking up stones, no one could explain why. 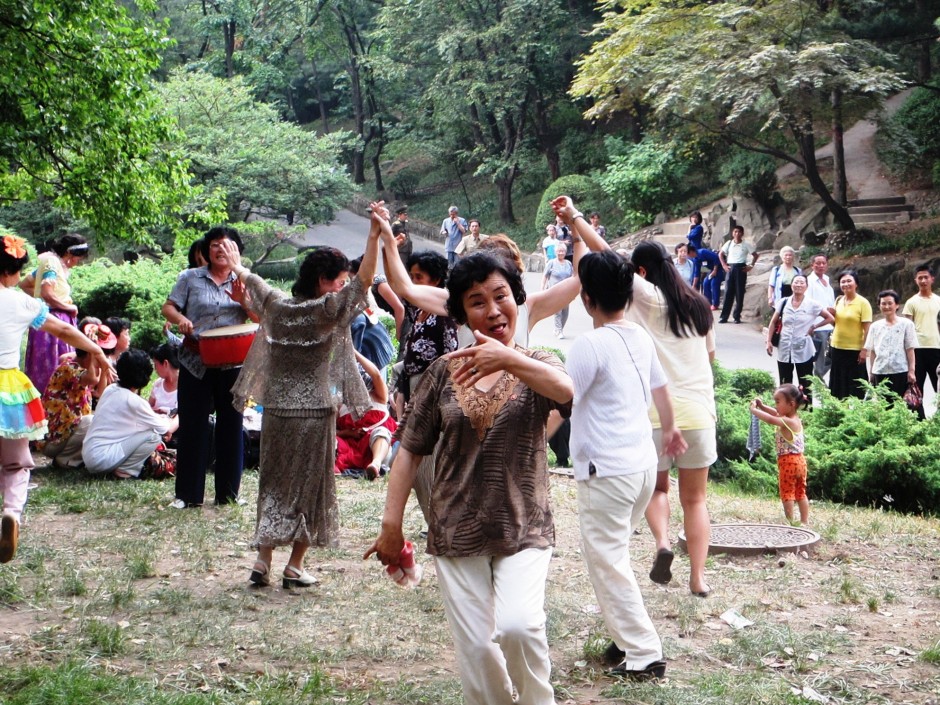 Dancing in Pyongyang's Moranbong Park is popular on Sundays, as a chance to get together with family and friends. This group found our dancing hysterically funny, as we pranced about, waving and twirling our arms. Although some could speak English, they were very reluctant to converse. 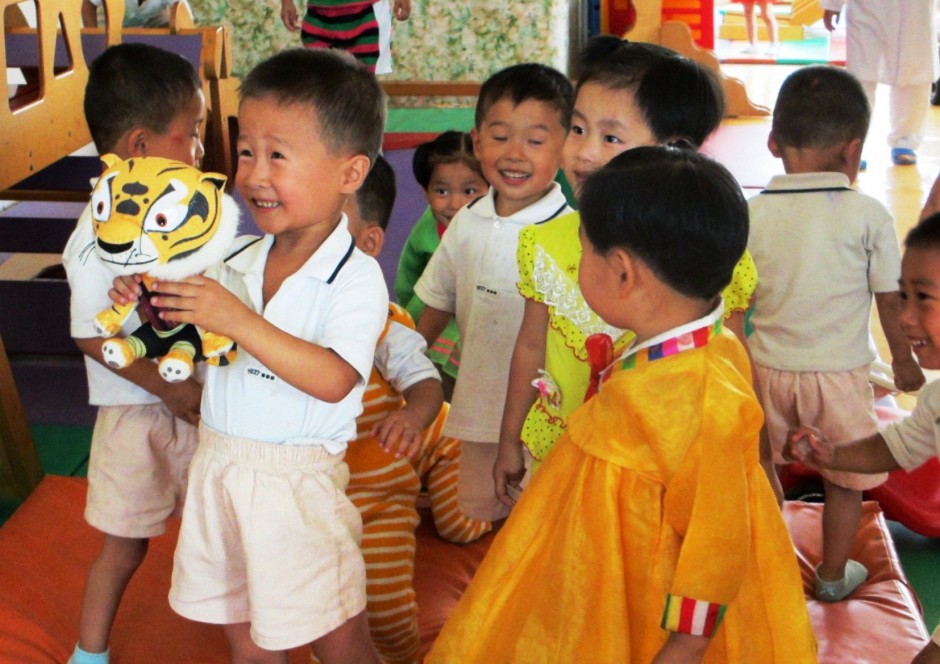 Children at the orphanage

There were 190 children at this orphanage, with 60 teachers and workers. I asked about fostering and adoption, but this was almost unheard of. I was told that it’s difficult enough to provide for your own children. This orphanage had three lots of triplets. Producing triplets is regarded as a high achievement, and your reward for this feat is having the children taken away at birth. Apparently, it is an indisputable fact that parents can't cope with three children at once. Off to the orphanage they go, but they are allowed home on Sundays. 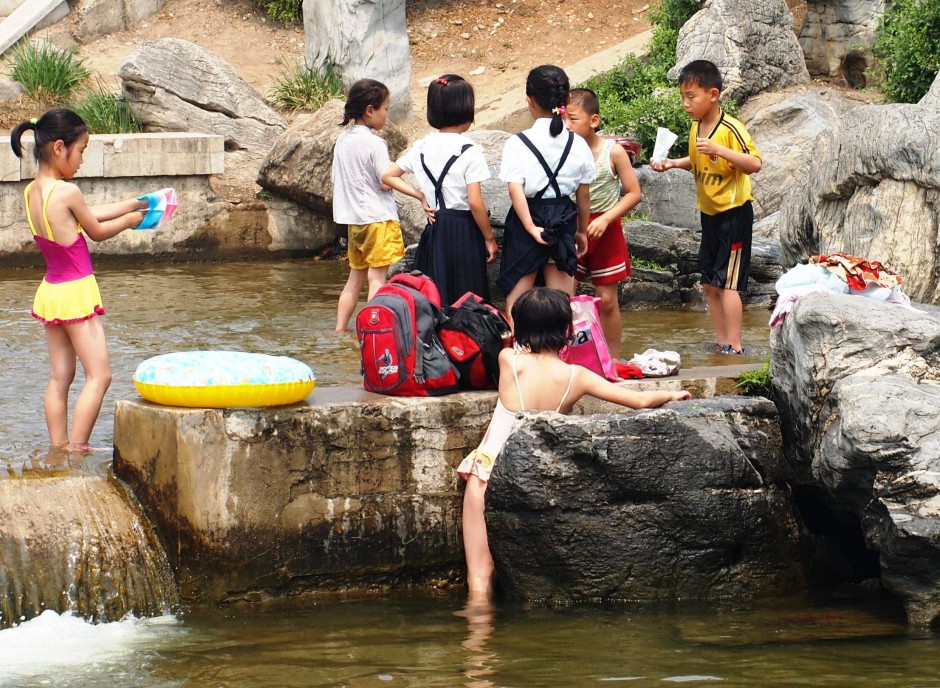 Playing in the fountain

Wherever there was water, there were people making use of it: playing, fishing, or paddling. Even in Pyongyang, the showcase city, I saw groups of people collecting water from storm water drains using buckets and containers. At one stage we were without any running water for 24 hours. 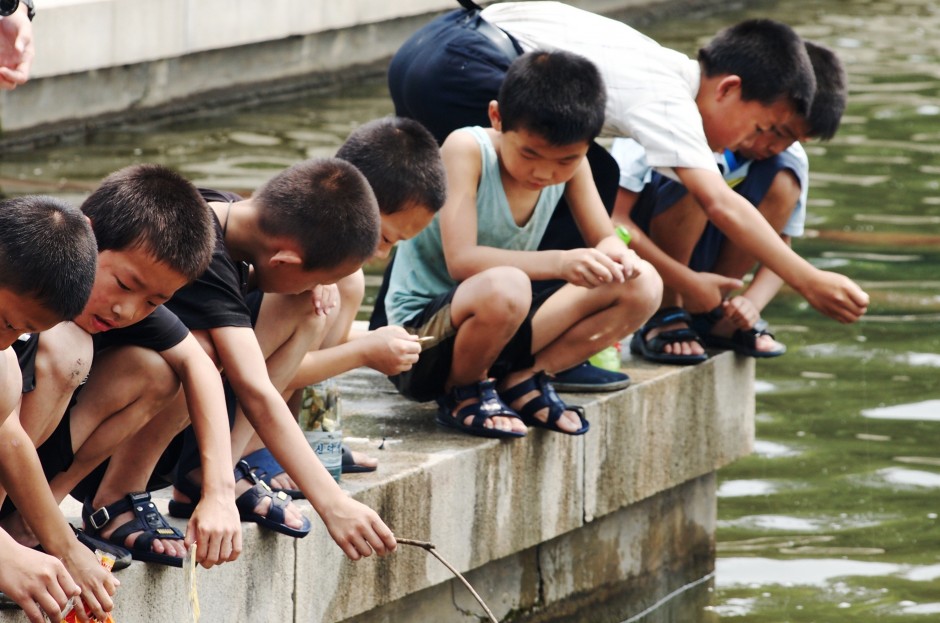 This photo is one of my favorites, as most of the time, everyone we saw looked scrubbed until they were shiny. If they weren’t, we weren’t allowed to take photos. It’s apparently acceptable for boys to be grubby. 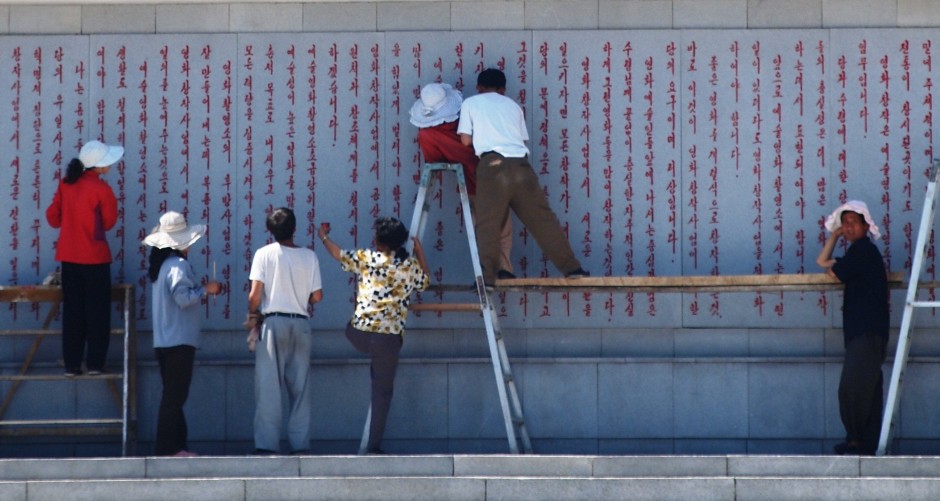 Propaganda at the film studios

These people are updating information at the Pyongyang film studio, where an average of 30 films are produced a year, though you would be hard-pressed to tell the difference between any of them: They all carry the same messages. The film sets here are permanent, not at all like Hollywood facades, and set in the 1950s and 1960s. 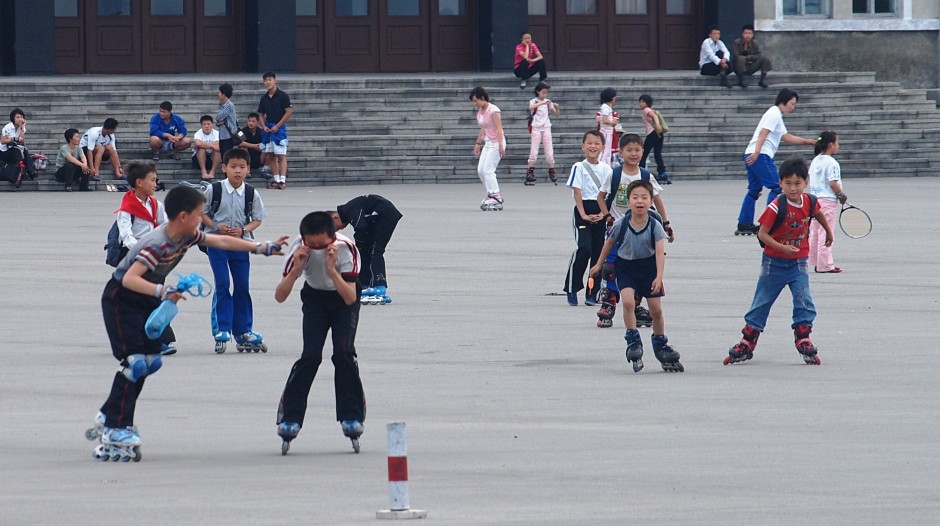 This picture was taken near Wonsan Harbor, where we were allowed much more freedom than in Pyongyang. We walked along the beachfront and mixed with the locals on their way home, but without our cameras. Although we ended up with quite a following (mainly children), only one person spoke to us. He only wanted to explain that he was a brave soldier protecting his country and carrying out his duties as required by the Dear Leader. 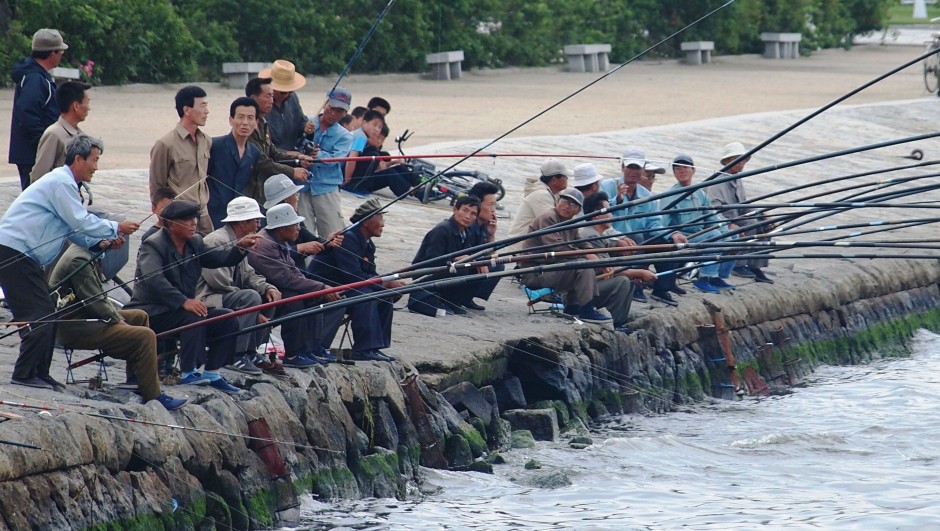 Note that all those fishing are men. Our guides bragged that there is complete gender equality in the DPRK, but they revealed that 80% of men and 0% of women smoke, and that the legal drinking age for men is 18 and only 17 for women. They couldn’t explain the difference, but told me that it’s irrelevant since women don’t drink. Both smoking and drinking are socially unacceptable for women.

There are only 2 million hectares of arable land in the DPRK, so farming is intensive, with double and triple crops. All farming methods are fixed centrally and no deviation is permitted. With almost no exceptions, everyone in North Korea must help during the harvesting and planting seasons. It sounded good at first to hear that there is no unemployment in North Korea. But then I was told there are no positions vacant either, and realized this means no career choice. On completion of education or military service, each person has to apply to the Workers’ Committee for a job. The Committee allocates what it decides is the most appropriate position after assessing qualifications, references, and reports. 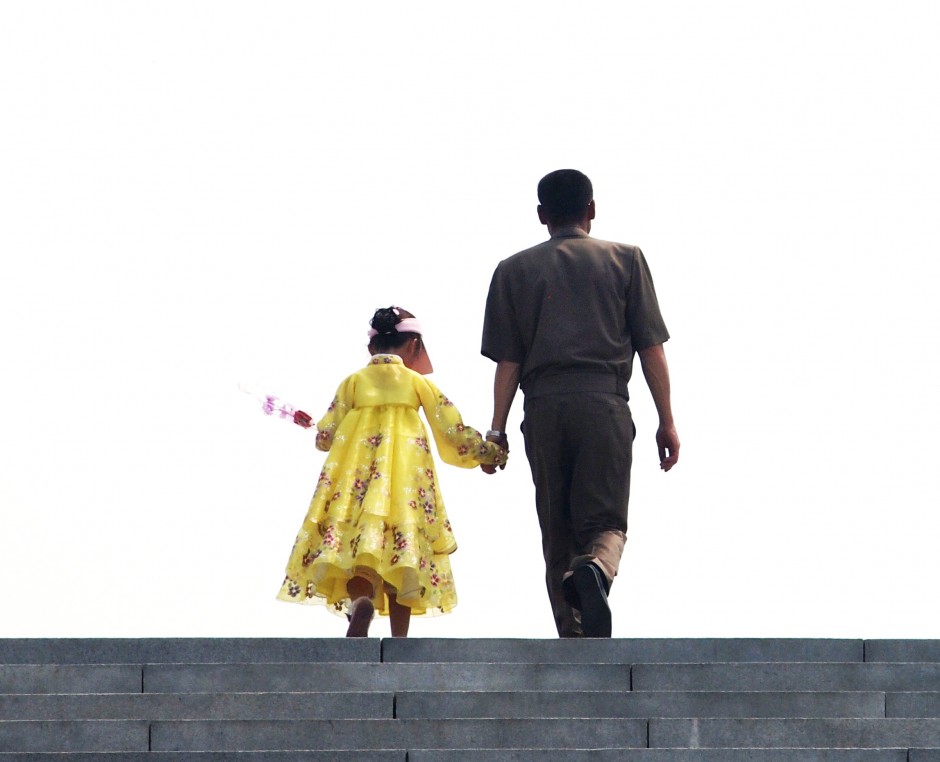 Laying a wreath at the cemetery

The Revolutionary Martyrs' Cemetery, with its individually carved busts of fallen comrades, each one looking toward Kim Il Sung’s palace in Pyongyang, is visited regularly in the same way that graves of loved ones would be visited.