The vast, flat landscape of Oklahoma is home to just 4 million people. The rural plains stretch out for miles into the horizon, the fields only broken up by the occasional oil pump or farm house. Given this seemingly empty, quiet landscape, an outsider might be fooled into thinking there isn’t much happening in Oklahoma.

Though it looks barren now, Oklahoma was once home to at least 35 Native American tribes, including the Cherokee, Comanche, and Osage peoples. Forced assimilation and removal, genocide, and land theft caused near-irreparable damage to the state’s Indigenous cultures. However, the rich history, and cultural and artistic contributions of these peoples is remembered and honored in museums in Oklahoma City.

Oklahoma is also home to one of the most significant events in United States frontier history: the Land Run. On April 22, 1889, land that had been previously protected against settlers became available. Both families and individuals lined up at a designated starting point on horses and wagons and at the sound of starting call, raced to claim lots on a first come, first serve basis in a chaotic free for all.

The Land Run is a prime example of just how much Oklahoma was transformed by cowboys, outlaws, homesteads, oil booms, and the Wild West. In fact, what we now think of the mythology surrounding the founding of the United States has its roots in Oklahoma. There’s a bronze monument to Land Run in the Bricktown neighborhood of Oklahoma City. It’s best viewed from the Bricktown Water Taxi; the tour is narrated by the taxi’s captain who doubles as a knowledgeable historian.

An immersive, interactive lesson in Oklahoma history is available at the museums in Oklahoma City, and most of them do it without erasing the role of native peoples. Presented in visually enticing exhibits that display all sorts of relics from this time period, Oklahoma City museums present this history in family-friendly settings and offer a deeper understanding of not just the state but the formation of the United States.

But it’s just not history you’ll find in Oklahoma City: There’s also art, photography, and sculpture to explore — even music, which you can learn all about at a quick visit to The American Banjo Museum. Whether you’re an art or American history buff, or looking for an educational trip to a destination with activities that will keep kids occupied, Oklahoma City is worth a visit. Here are the best museums to visit once you get there.

The best museums in Oklahoma City to visit 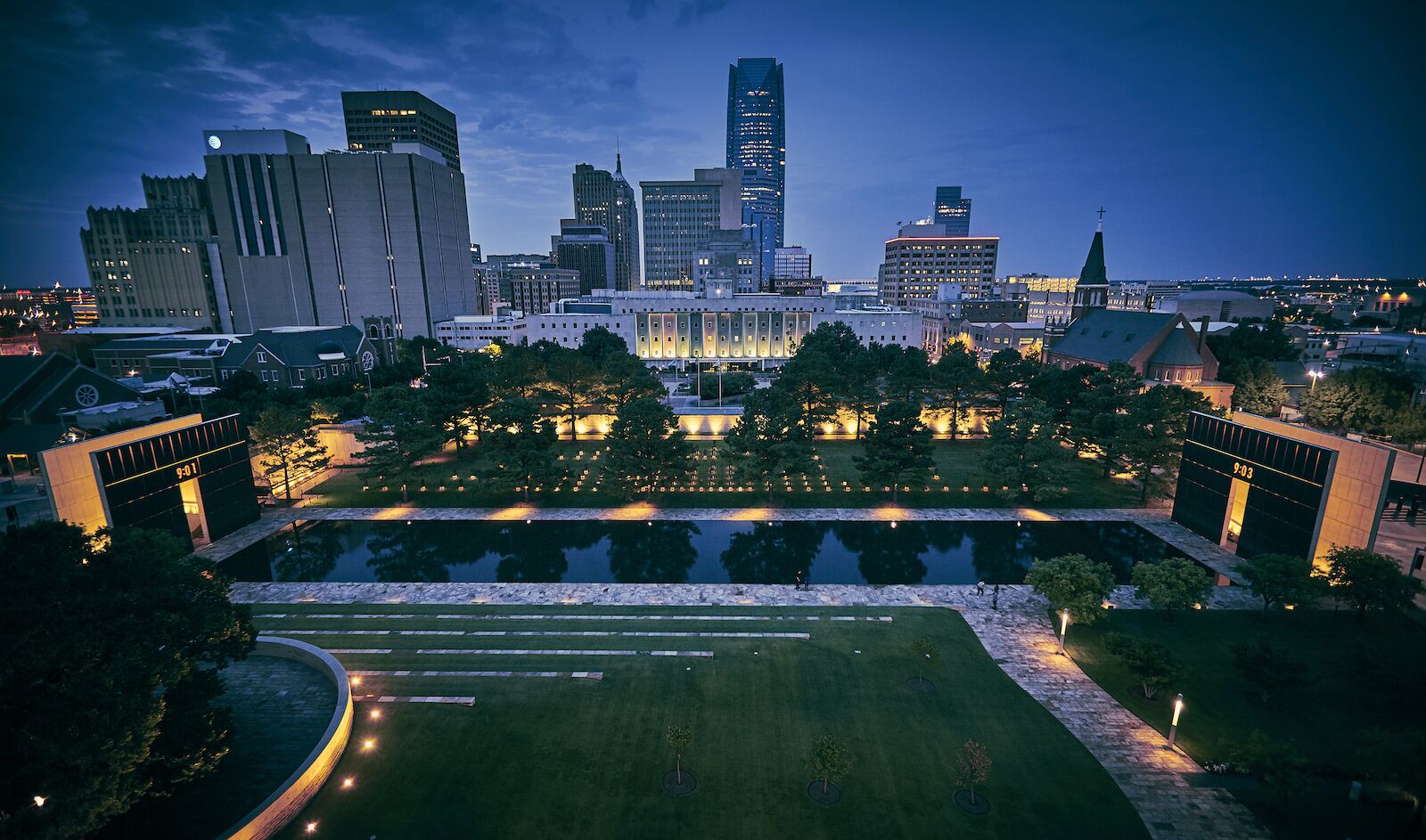 Built in honor of the 168 victims of the 1995 Okahoma City Bombing, this structure features a reflective pool between two slabs of towering stone called the Gates of Time. The gates are inscribed with the second before the bomb went off (9:01) and the second after the bomb went off (9:03), and visitors walk between the two monuments in the moment the bomb exploded inside the Alfred P. Murrah Federal Building.

The fence outside the entrance to the memorial is covered in heartbreaking testimonials to the victims — letters to lost parents, stuffed animals, and other deeply personal tributes to those who died in the bombing. The adjoining museum details the impact of the bombings, what lessons can be learned from those events today. While it’s difficult to keep your composure at the memorial, but it should be your first stop in Oklahoma City, 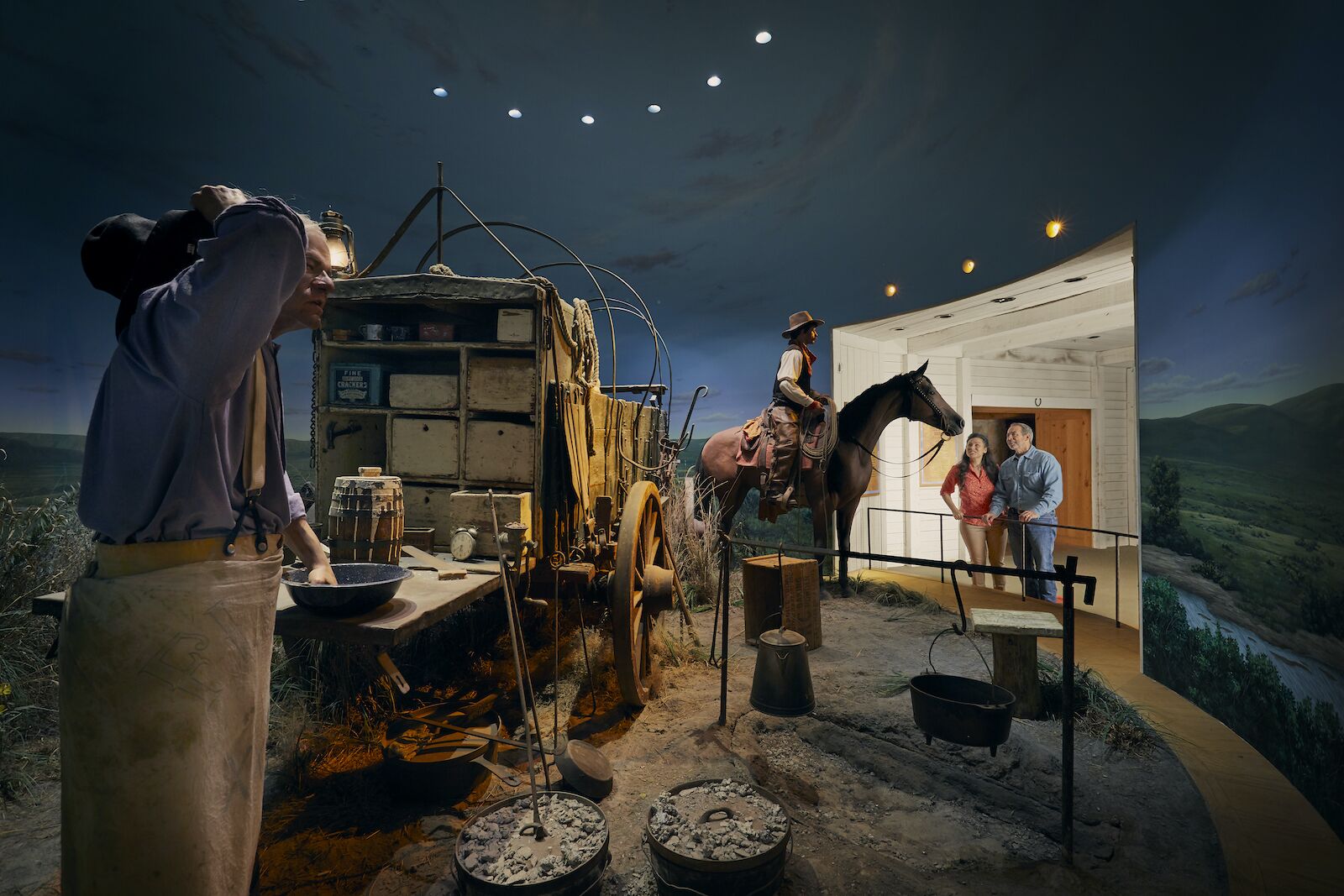 The collection of cowboy, Civil War, and frontier history at the National Cowboy and Western Heritage Museum is impressive. In the lobby, visitors are greeted by the iconic The End of the Trail statue. The exhibits feature Civil War uniforms, saddles, guns, and mocassins, as well as collections of Native American clothing and jewelry. The museum’s galleries are lined with paintings and photography depicting exploration of the West, Native American tribes, and stunning landscapes of the then unconquered wilderness. There’s even a detailed recreation of a frontier town, complete with a church, stables, and a newspaper office. 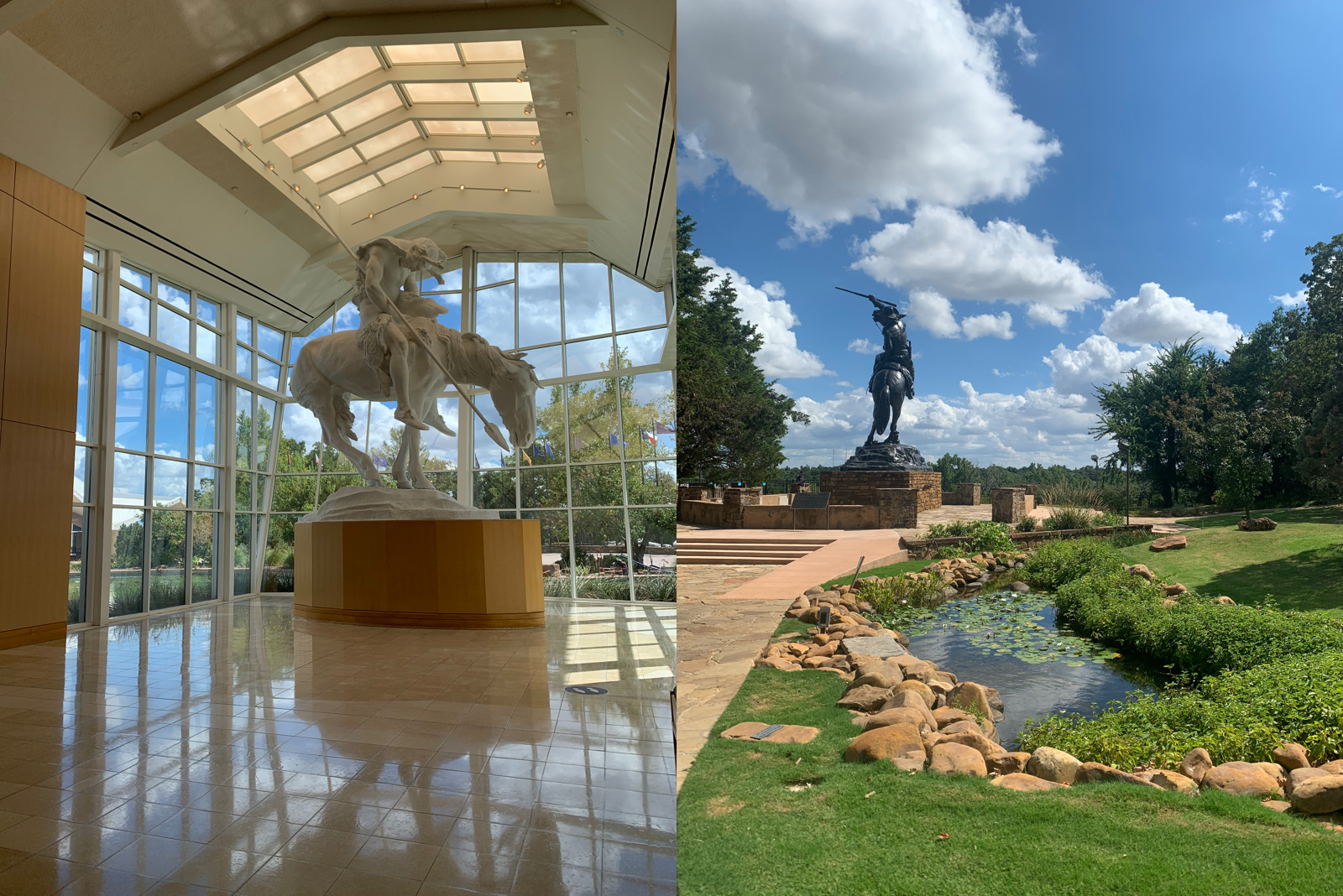 Liichokoshkomo is the interactive arm of the museum, where visitors can find life-size replicas of Indigenous housing, from a Pueblo cliff dwelling, to a Kiowa tipi, as well as recreations of a trading post and train depot. The lush grounds of the museum are serene; take a walk down to the burbling creek dotted with lily pads, the best place to view the staggeringly tall statue of Buffalo Bill Cody astride his horse Brigham. 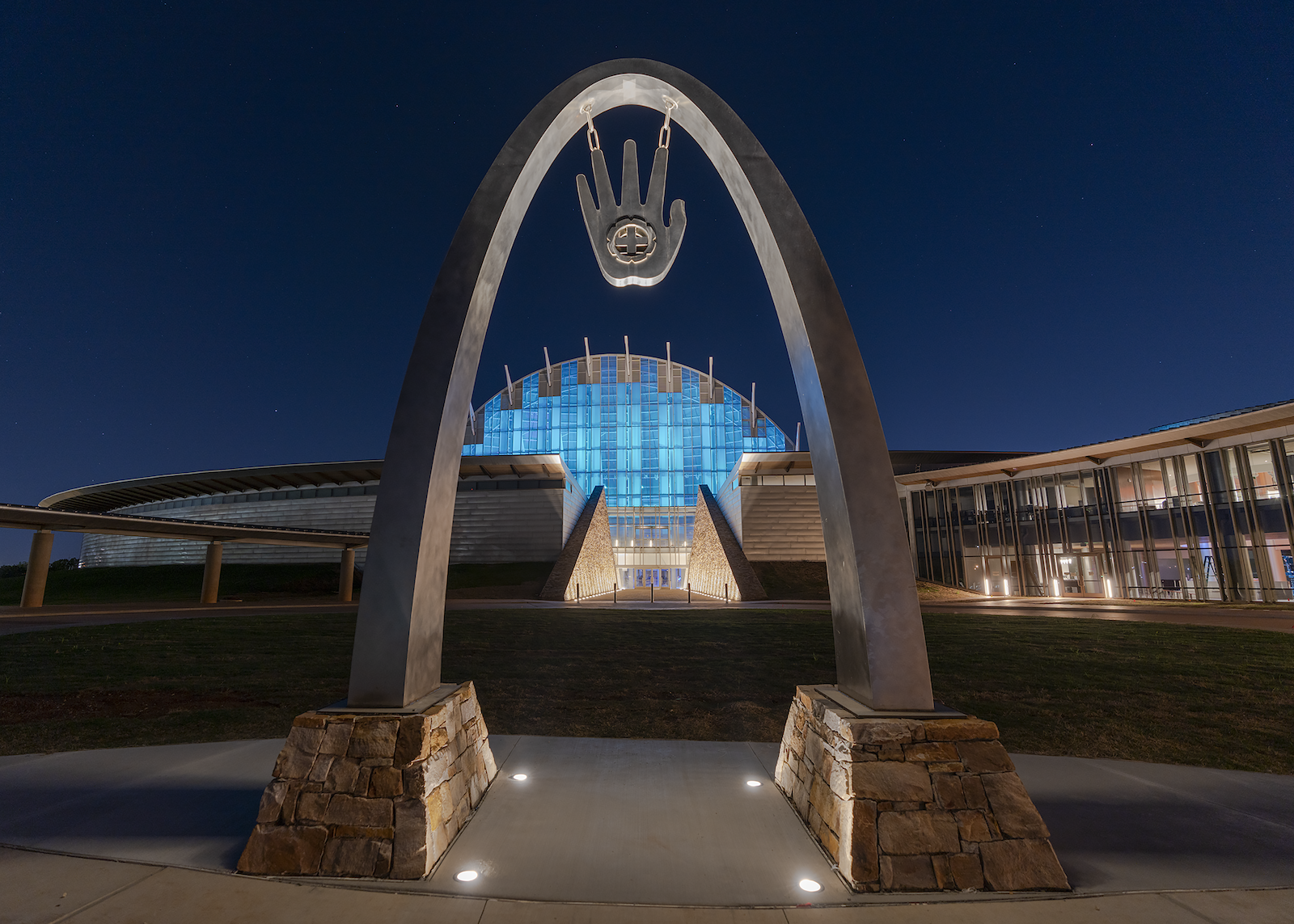 If you go to the National Cowboy and Western Heritage Museum, make sure you follow it up with a visit to the First Americans Museum. This museum has both audio and visual representation of the Indigenous cultures that shaped Oklahoma before it was even called by that name. Visitors are first greeted by an animated video depicting Native American creation myths, before moving into rooms that recount in detail the forced relocation and genocide of the 39 tribes native to Oklahoma. 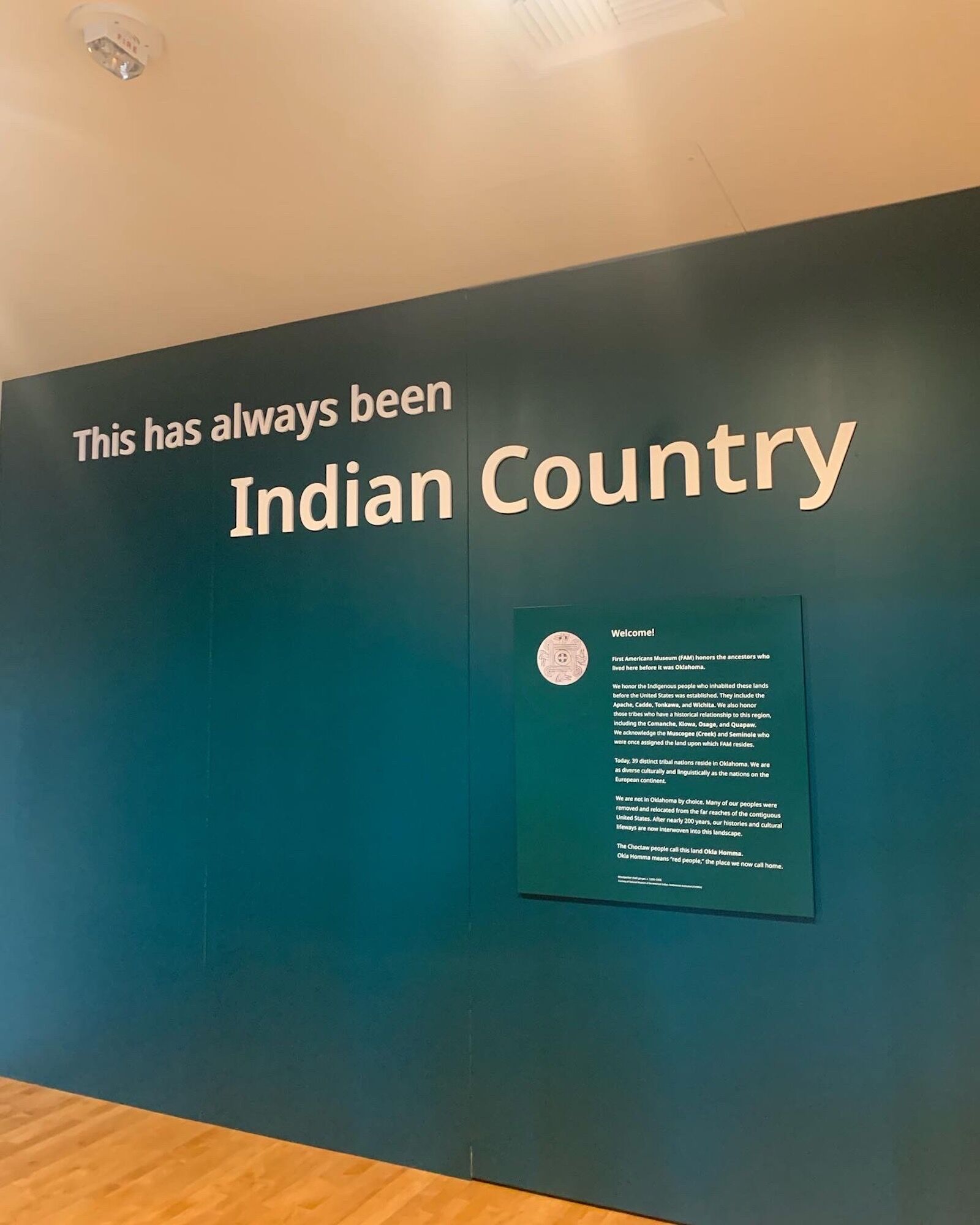 One especially powerful video exhibit features personal stories retold by the descendants of people who were removed from their homes and forced onto reservations, offering tales of how they suffered but ultimately endured. Other multimedia installations recreate storytelling traditions around a crackling fire, while one cavernous room plays peaceful bird song and Indigenous singing to create a serene soundscape amid a harrowing display of a shameful period in American history. 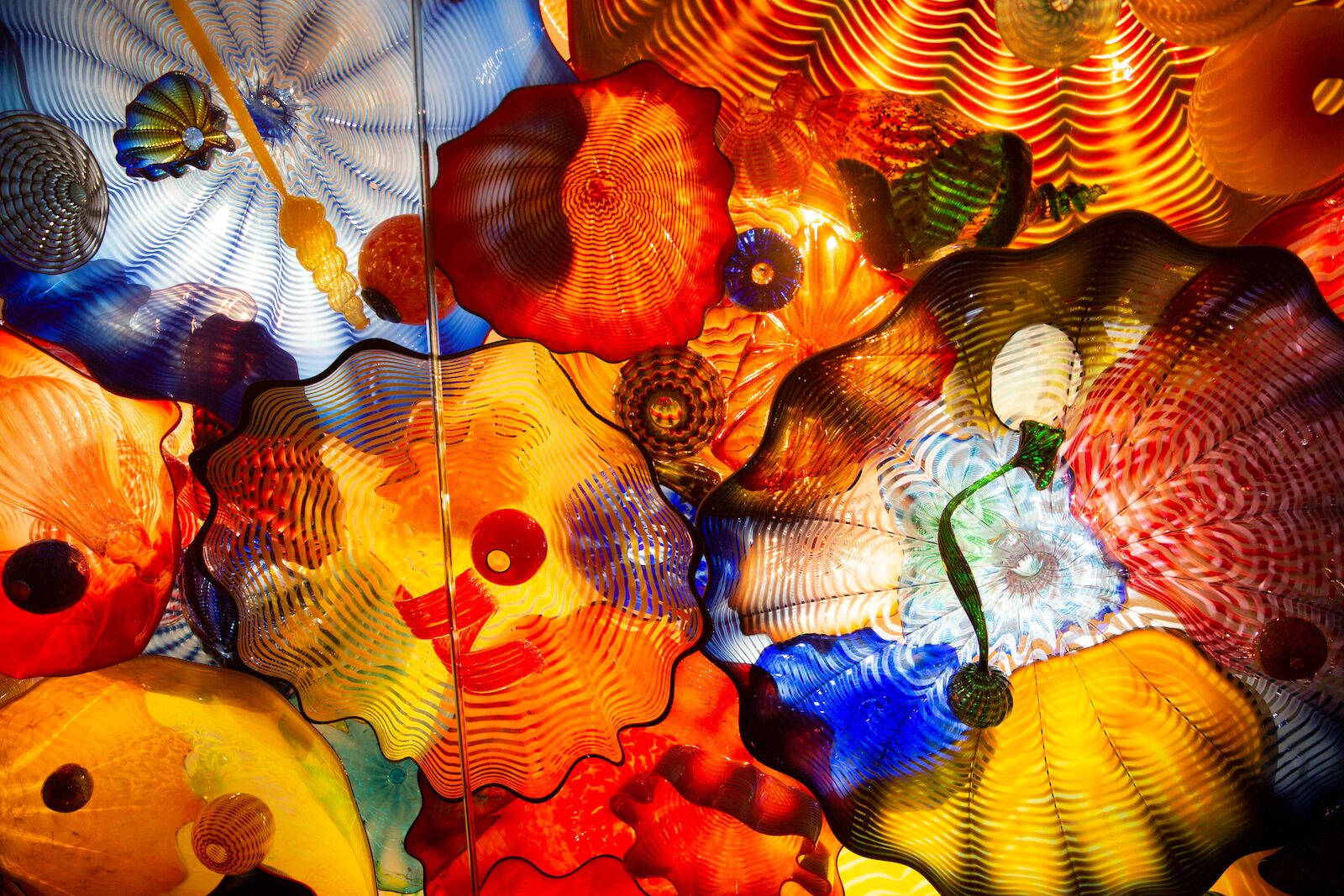 Take a break from frontier history with a visit to the Oklahoma City of Museum of Art. Currently, the Museum of Art is displaying a collection of never-before-seen Chihuly glass sculptures, in honor of his 50-year career. There is also an exhibition of French paintings, as well as portraits by Kehinde Wiley, who painted Barack Obama in 2018.

This is Oklahoma, though, so of course you can indulge in more historical artwork if you wish. The Museum of Art has an extensive collection of American paintings from the colonial period to the 1960s. 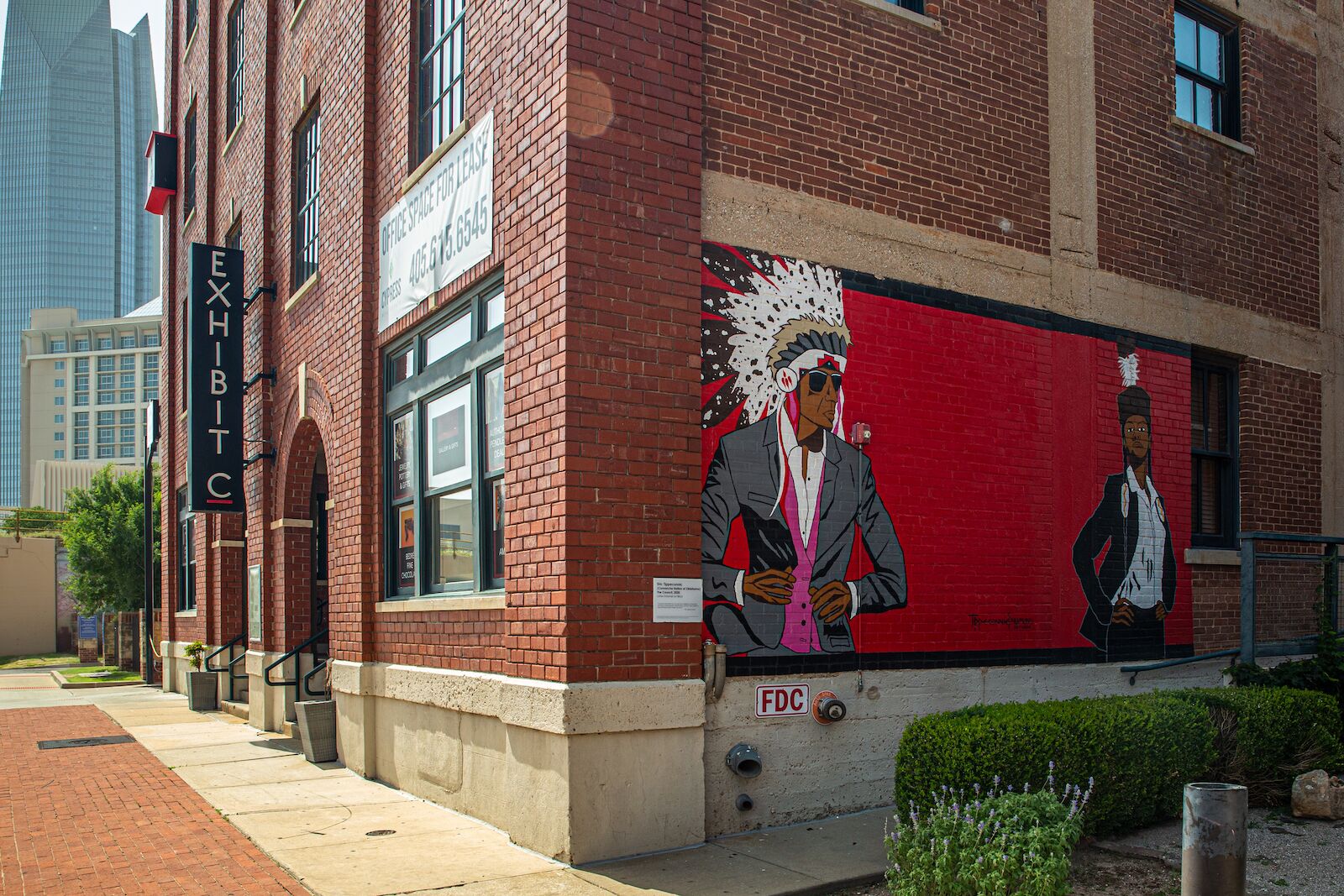 This small gallery and shop, located in Bricktown, spotlights artwork by Indigenious people. Exhibit C is owned by the Chickasaw Nation, so support for the gallery goes directly to Indigenious people. Jewelry, pottery, paintings are all for sale, but visitors can walk through the space, treating it like a gallery space, and appreciate and admire the artwork.

If you want to learn more about the contributions of the Chickasaw people to the history of Oklahoma, a visit to the Chickasaw Cultural Center an hour and a half away in Sulphur, Oklahoma, is worthwhile.

Where to stay in Oklahoma city 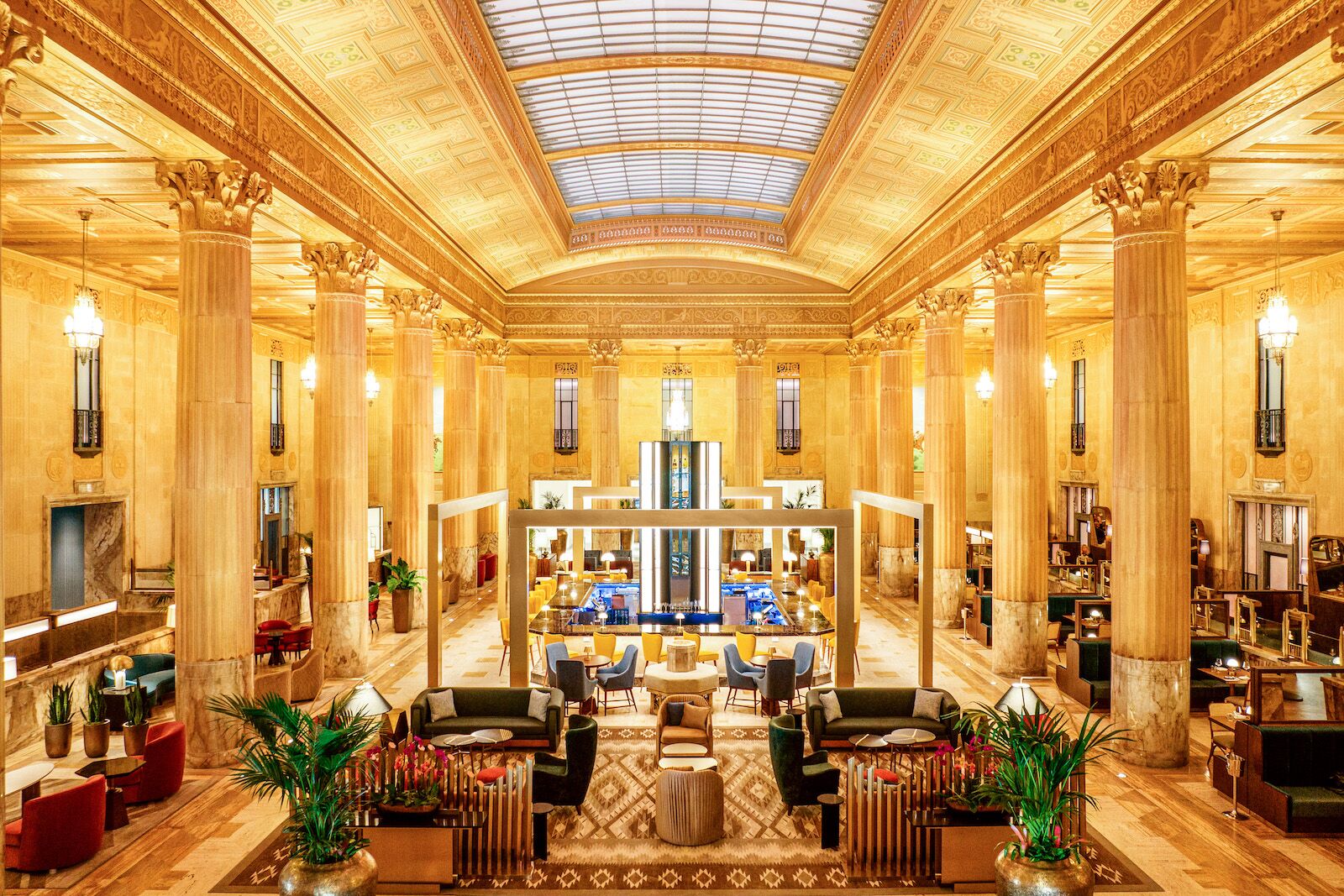 The National is undoubtedly the best place to stay in Oklahoma City. Centrally located downtown, the hotel reopened after extensive renovations in April of 2022. The building originally housed a bank, and the remodel has preserved the original tellers’ windows. The ornate lobby has gigantic murals of two significant events in United States history: the Louisiana Transfer and the Land Run.

Speaking of that lobby, it’s also where you’ll find The Great Hall, a chic bar accented with jewel-tone red, blue, and green couches, spread out amongst the grand columns from the original bank. 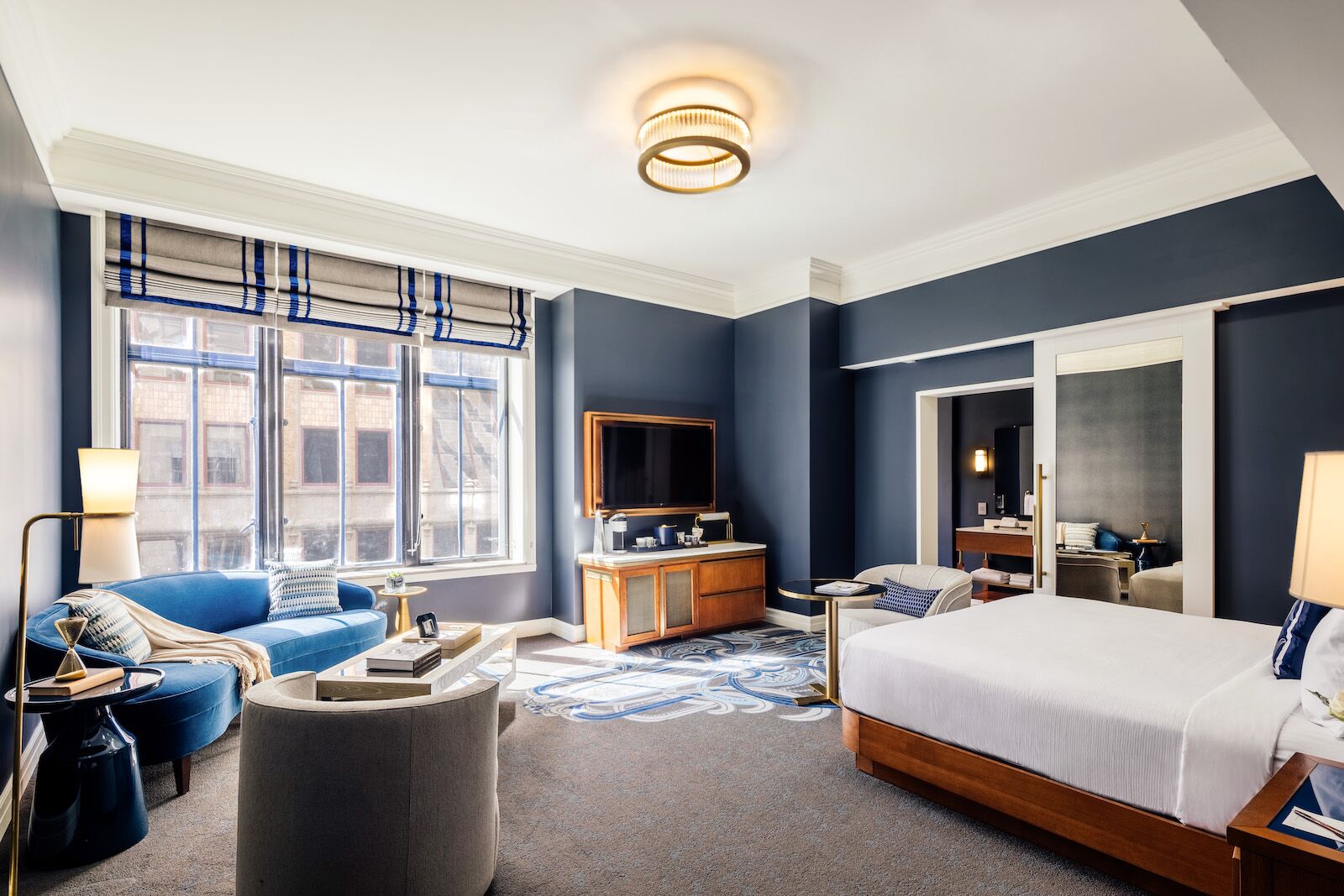 This is a great place to set up with a laptop and enjoy a coffee while you get some work done. At night, come to this same elegant, but comfortable, space for dinner at Teller’s, the hotel’s Italian restaurant. Under the dim golden lights of the dining room, you can sip a cocktail and feel transported to the 1930s. For a lively environment, try the basement bar, The Library of Distilled Spirits, which was built inside the original bank vault.

The rooms at The National are spacious and comfortable, and come equipped with a bathtub, which is so rare in hotel rooms these days. Decorated in rich navy blues, the interior design is simple but sophisticated, the perfect place to relax and unwind after a long day exploring the city, especially because the hotel is refreshingly quiet and insulated from outside noise — perhaps a surprise for a hotel in the middle of a city.

While I recommend spending at least one morning in your room, lounging over a decadent room-service breakfast, the location of this hotel is really what makes it shine. It’s within walking distance of Bricktown, a lively arts district where warehouses have been transformed into restaurants and bars, as well as the Oklahoma City Museum of Art and the Oklahoma City National Memorial.

MuseumsThe Best Museums in Austin for Every Type of Traveler
Tagged
Art + Architecture Culture Museums
What did you think of this story?
Meh
Good
Awesome

14 Signs You're Back in Oklahoma City

20 Signs You Learned To Drink in Oklahoma City

16 Reasons Oklahoma City Is the Most Underrated US City