There’s a point during the second week of a cycling tour when something beautiful begins to happen.

Your body resigns to working five to eight hours a day, your muscles having pushed through the initial aches to a state of warm, sinewy resilience. Your mind seems to slow and sync with the speed of the drivetrain, so you’re no longer bored by the stretches of flat forest road or counting the miles till the next pit stop. And you’ve traversed enough of the land to begin to see the terrain’s natural flow, from rocky coastline to river valley to piney hills and on forever beyond the next curve in the road.

In the summer of 2008, my wife and I took a month to cycle around the Atlantic Canadian provinces of Nova Scotia, Prince Edward Island, and New Brunswick. Five and a half years later, this is what remains. 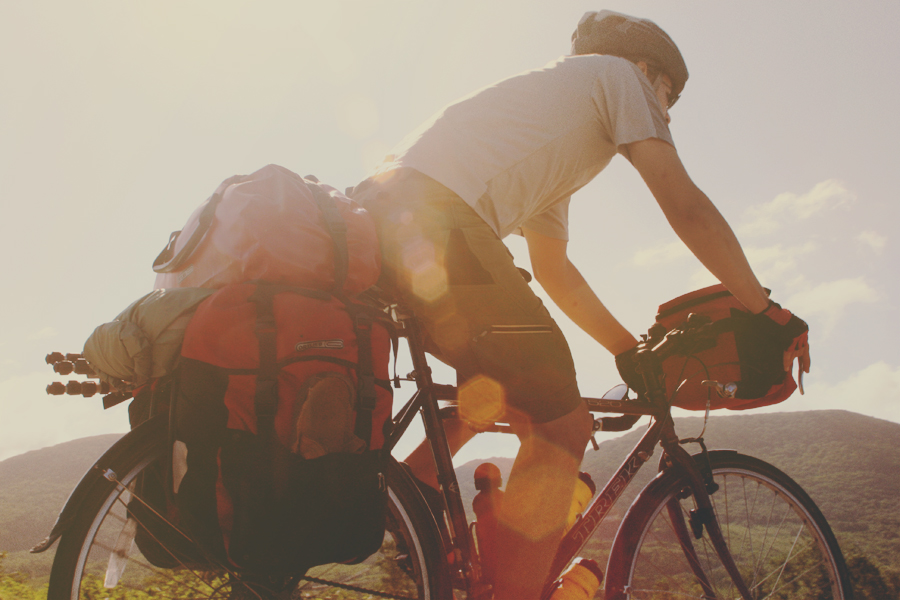 At its most fundamental, cycle touring is a lesson in self-sufficiency. You are what you carry: clothes, tent, food, water, cookery, entertainment, and the equipment to fix it all if something goes wrong. I rode a Trek 520 with two rear panniers, a drybag and duffel on top of those, and a handlebar bag up front. Total rig weight, 87lbs.
All photos: Aya Padron 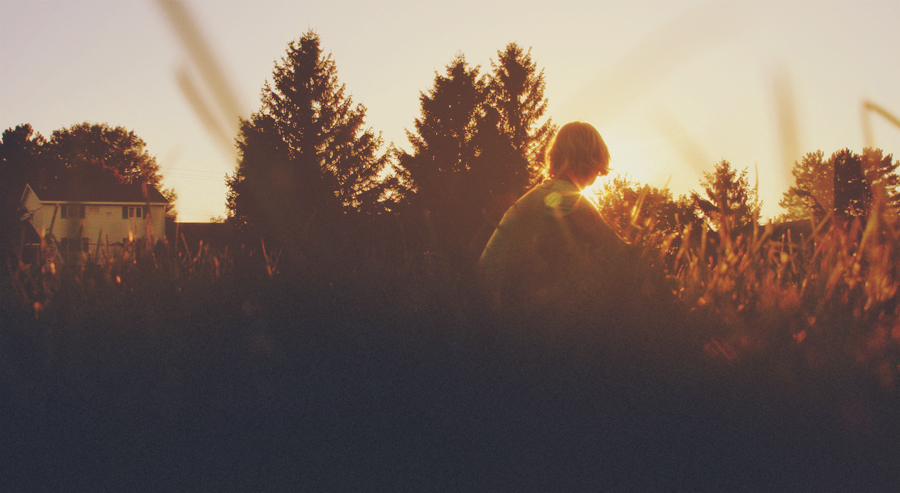 You do a fair amount of planning beforehand -- your basic route, likely stopping places, where to resupply -- but a bicycle tour also leaves room for spontaneity. Towards the end of our first full day of riding, we decided to blow past our initial sleep spot and instead found this hostel home on Cape Sable Island. The owner let us camp in her yard and use the facilities for a $20 "donation."

Atlantic Canada has a well-maintained system of provincial parks. This was our campsite view at The Islands, just outside of Shelburne, where the Roseway River empties into Shelburne Harbour.

TravelWhat Are Your Favorite Travel Memories? 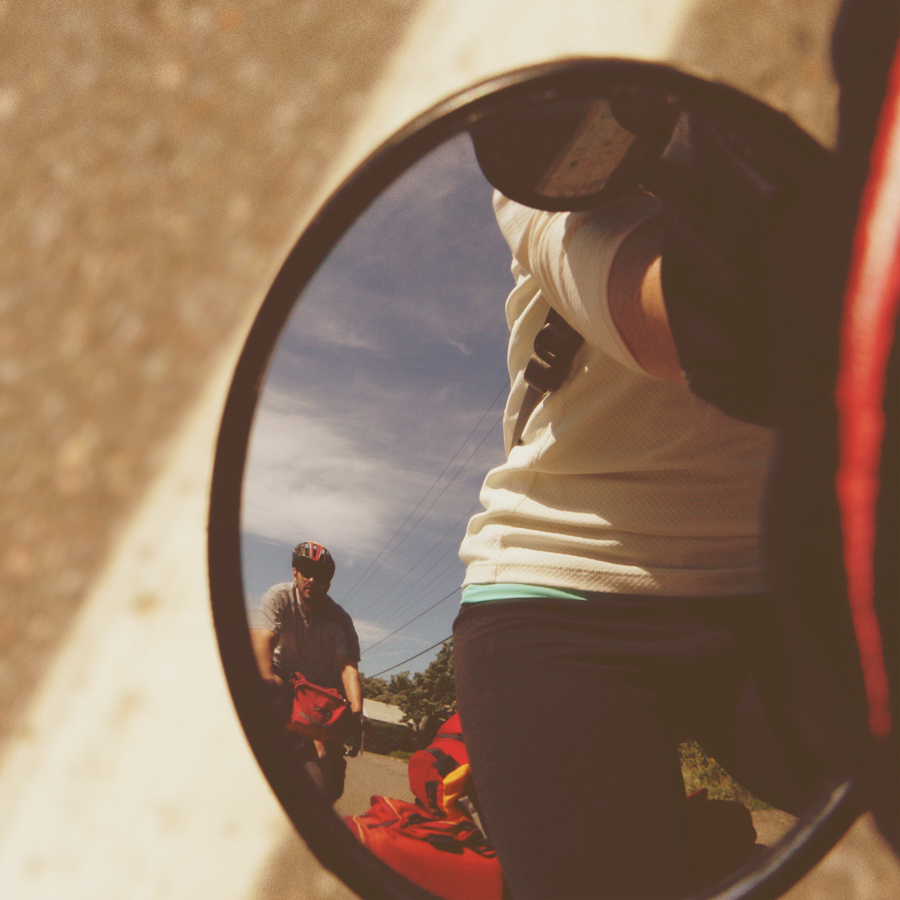 For the most part, vehicle traffic was scarce. These provinces typically featured express highways flanked by much quieter, and more scenic, local roads. Still, you make a habit of checking your mirror whenever you hear a car approaching. I actually experienced 'mirror-withdrawal syndrome' when I was off my bike -- looking down at my left hand for a rearview that didn't exist. 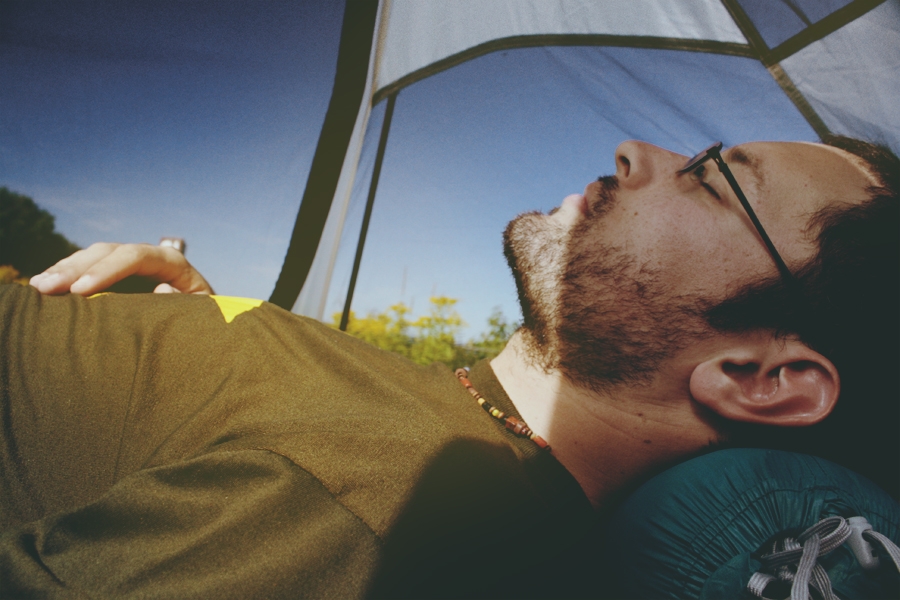 The moments after setting up the tent and getting out of the campground shower can be some of the sweetest of the day, especially when you've made your mileage more quickly than expected. You can feel your body melt into relaxation, its power reserves recharging for the next day's ride, or an afternoon hike. 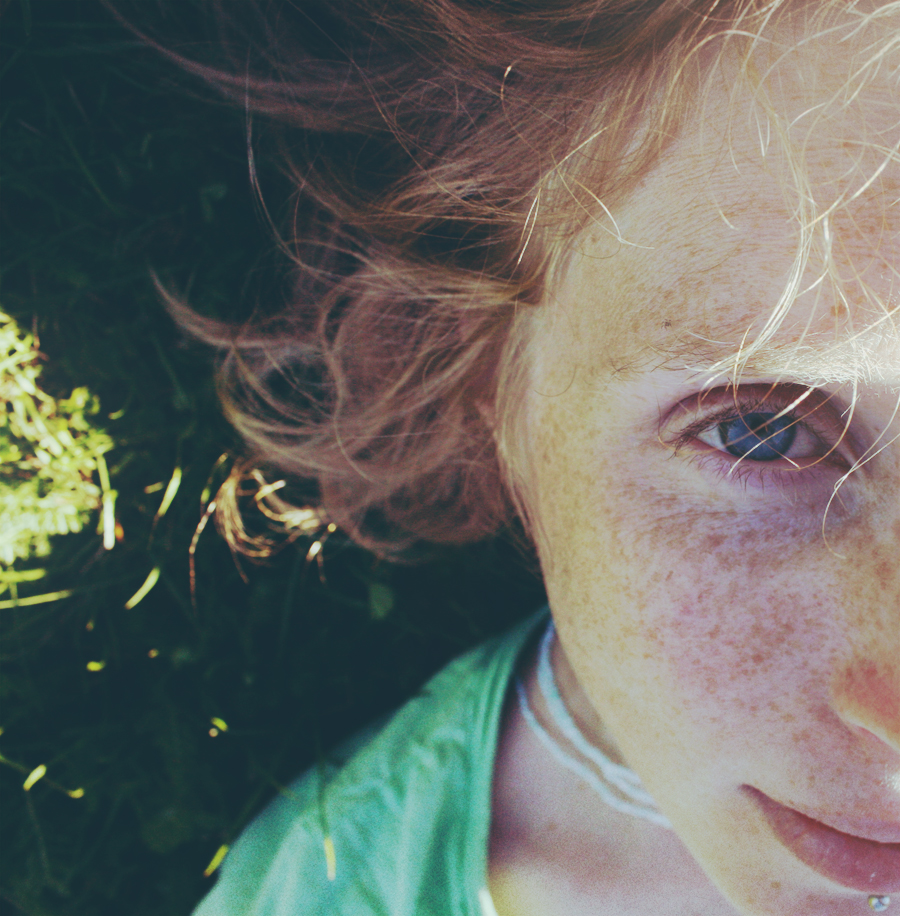 We had a day like this in South Harbour, Cape Breton Island. With 33 miles of hills behind us, we arrived at Hideaway Campground to find campsites with bluff-top views over the ocean. The owners also happened to have exclusive harvest rights to the oysters in nearby Aspy Inlet. We purchased a dozen on the half-shell in the campground office. 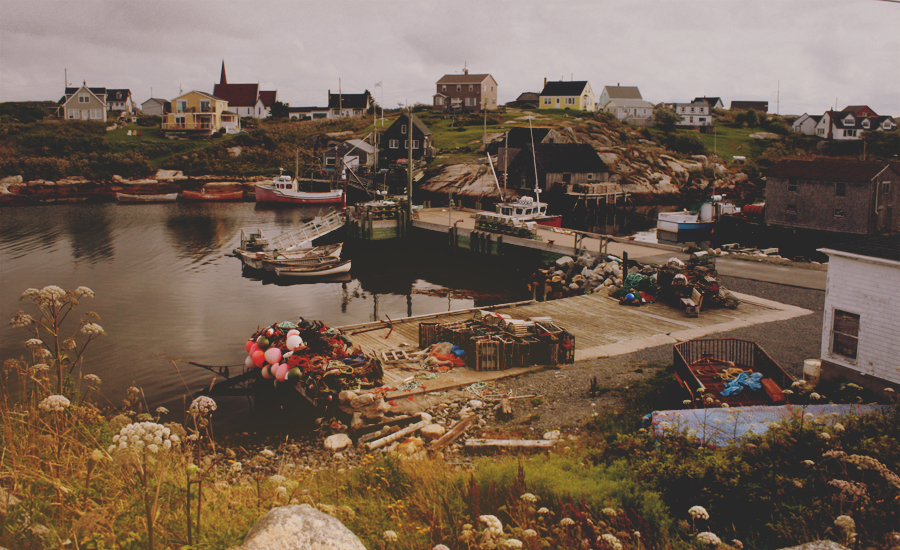 For a lot of the ride we were tracing coastlines, which in Nova Scotia meant bare, rocky hills leading to thick pine forest, with old fishing villages and lighthouses every few dozen miles. This is Peggy's Cove, one of the better-known (and visited) settlements. 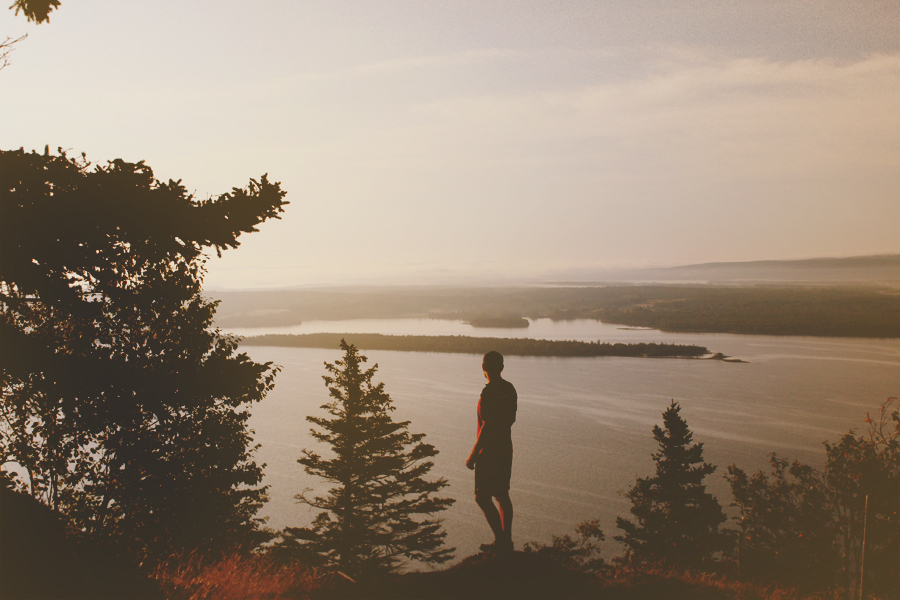 But on Cape Breton Island, which sits northeast of Nova Scotia proper, something different happens. The terrain rises over 1,500 feet into mountains that end in dramatic cliffs at the ocean. The road that circumnavigates Cape Breton Highlands National Park is called the Cabot Trail and is an international destination for cyclists. 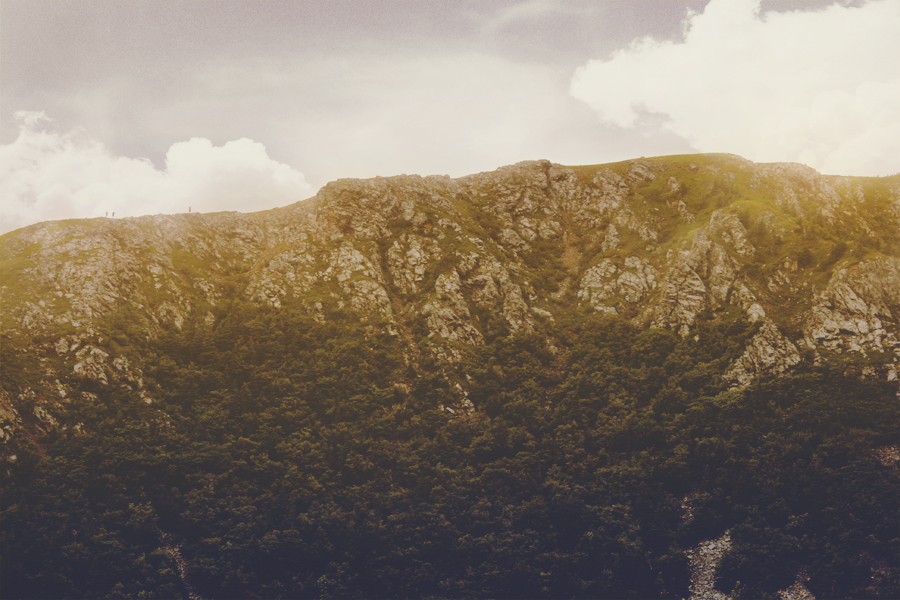 The Cabot Trail is all long climbs and descents. On the northwestern side, you can look over and see French Mountain, topped by hikers on the Skyline Trail. Another distraction: moose on the road.

After abundant sun along the south coast of Nova Scotia, the weather became moodier on Cape Breton. Which seemed to fit the landscape. This was the view from our campsite in Englishtown, looking north toward Cape Smokey. 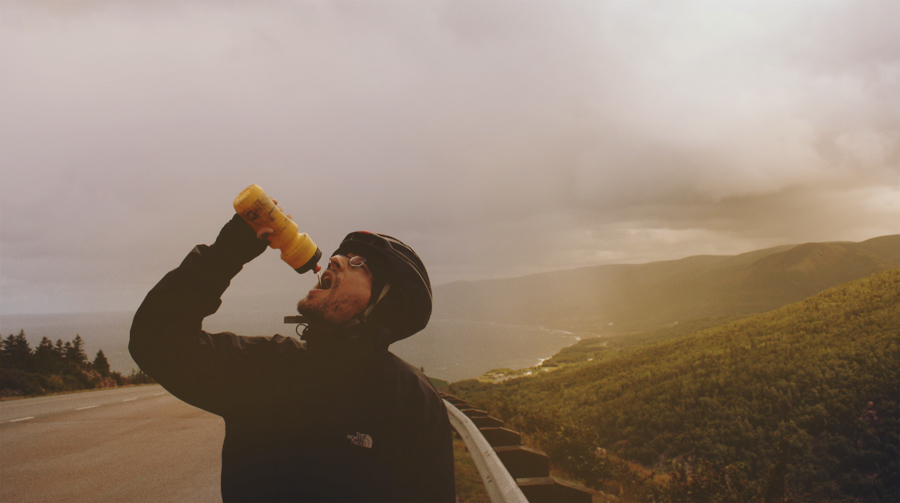 The rain hit hard on the ride into Cheticamp, blowing in horizontally off the water, threatening to push us off the narrow shoulder of the two-lane and into traffic. The owner of the B&B we stayed at that night seemed to have seen her fair share of shivering cyclists dripping puddles onto her porch. 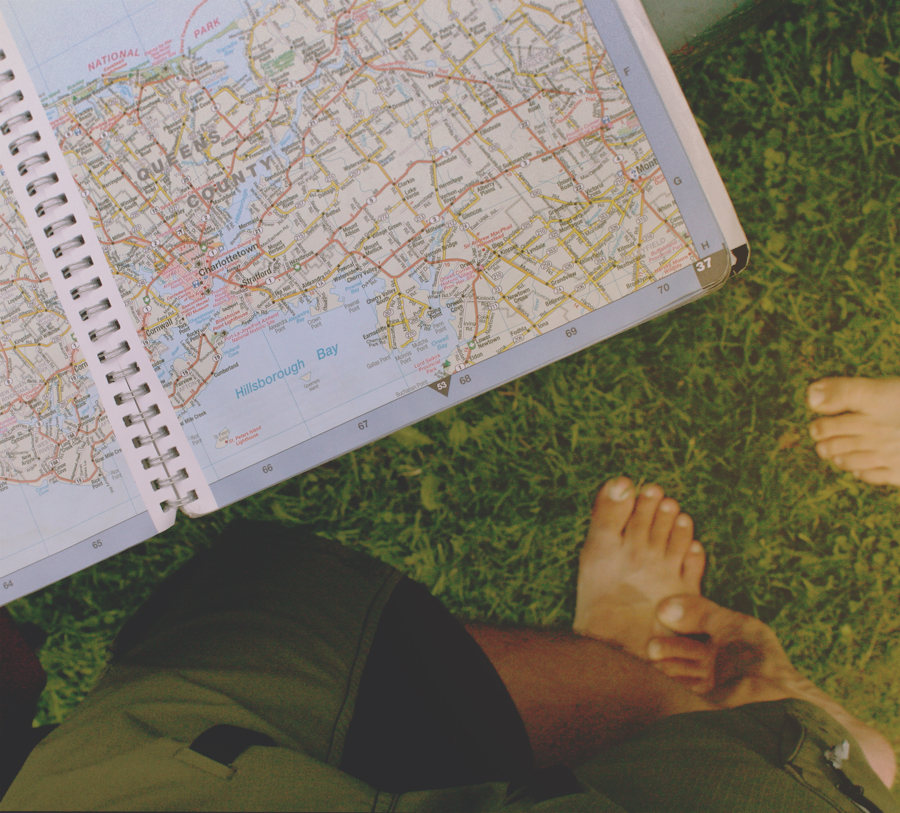 Part of each day's ritual was mapping out the next. Pick a route, highlight a campground, add up the mileage. Here we are on the approach to Charlottetown, PEI. 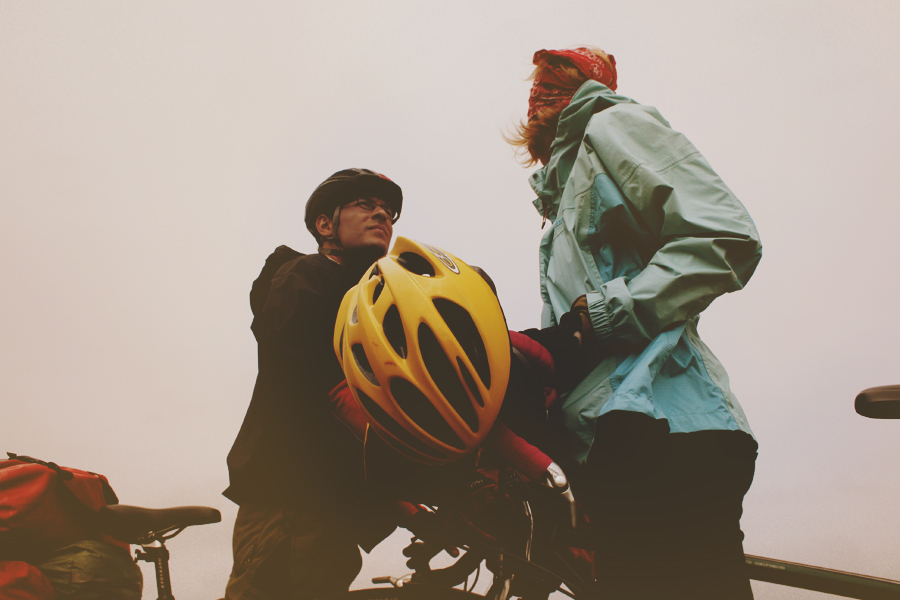 We were dodging (or, more often, not dodging) rain for the rest of the tour. While it sounds miserable, and in this picture we look the part, cycling in the rain is strangely fulfilling. Once you're soaked you can't get any wetter, and you know you've done due diligence in waterproofing your gear, so there's nothing left but to enjoy it. If you succeed, you feel like a five-year-old. 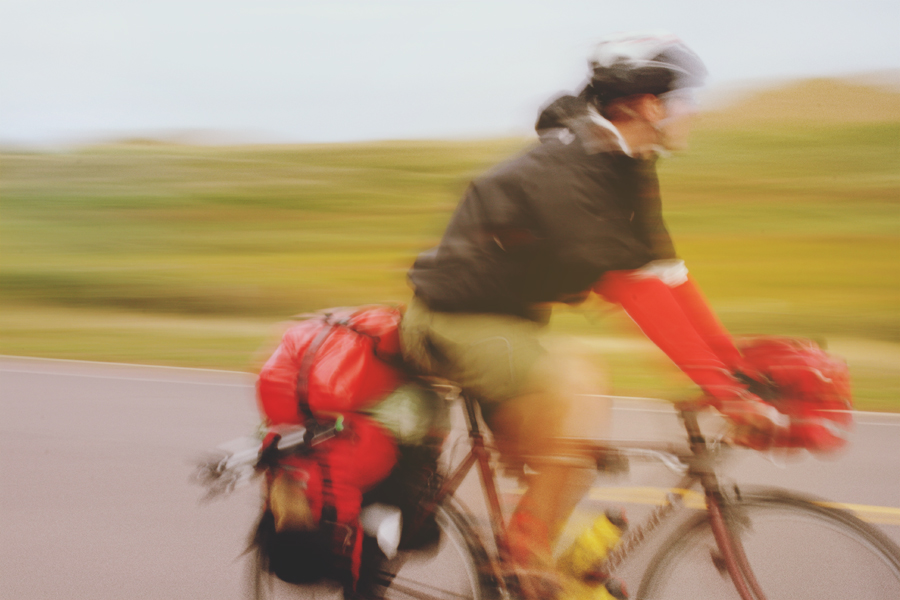 This image is a near-perfect memory of our ride through Prince Edward Island -- gentle green hills, wildflowers, rain gear, and the movement of the road. 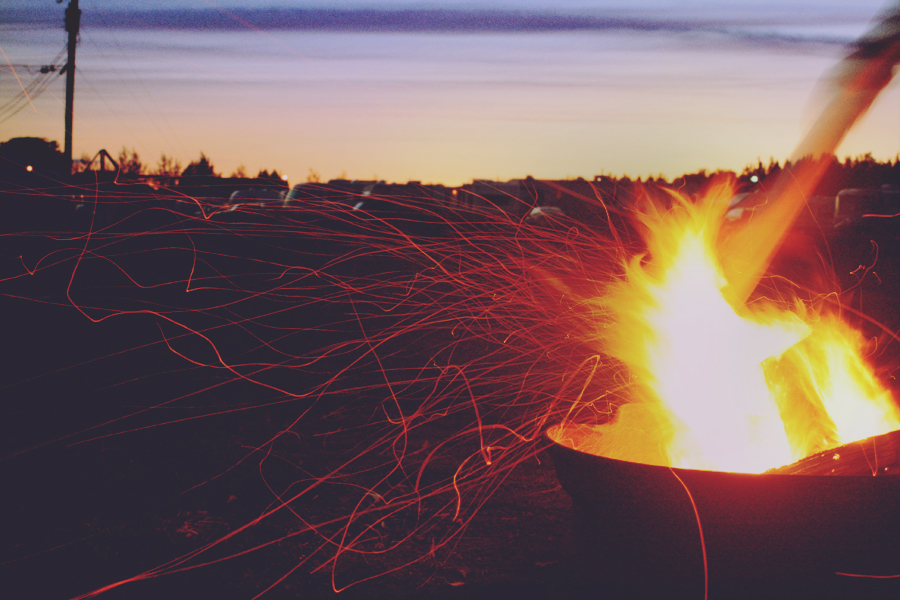 The ends of trips are sometimes lacking in emotional potency compared to beginnings. This one was not. Sitting by the campfire on our last night in New Brunswick, looking back over the atlas and the nearly 900 miles of road we'd covered, I was immensely grateful. Ready to go home, but forever connected to this place, in the way only travel at 17mph can connect you.