WHEN YOU THINK OF NORWAY, SEVERAL THINGS MIGHT COME TO MIND: glistening blue fjords, fresh salmon served over a bed of wild asparagus, friendly blonde people with perfect English, or rugged hiking excursions. But what probably doesn’t make the immediate list — and it should — is Norway’s wide selection of renowned historical hotels. Each one is set in a unique location, provides an unforgettable culinary experience, and is staffed with helpful, lovely people.

Here are six of the most interesting and beautiful places to stay in Norway. 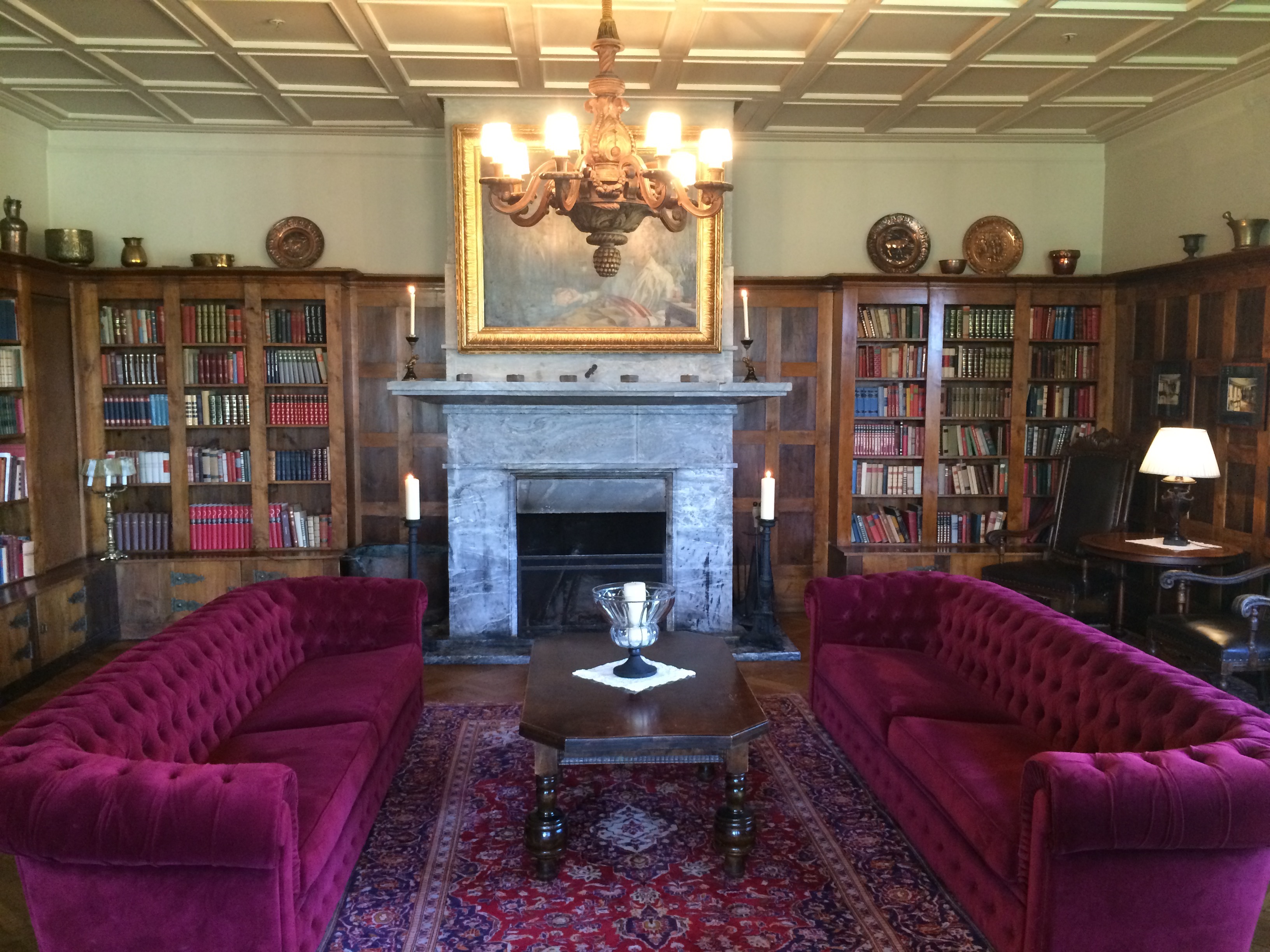 Losby Gods is a quick 20-minute drive outside Oslo, but it feels like another world. The first thing you notice upon arrival is the hotel’s expansive property: step onto the back porch and you’ll see sprawling grass lawns, hilly golf terrain, and dirt paths that wind toward forests.

And then there’s the interior. Taking a tour of the manor’s original rooms is like walking through a country estate that may have, in an alternate universe, belonged to one of your beloved great grandparents (you can dream, right?). The traditional sitting rooms, dining rooms, and library feel lived-in and approachable, but still elegant enough to suit the whole “heir to a country estate in Norway” fantasy you never knew you had.

When you aren’t tasting room-temperature aquavit (a popular distilled and flavored spirit) in the chilly wine cellar, testing out the plushness of original couches from 1850, or sitting on the terrace drinking a glass of champagne, you can dive into nature full force. Play a round of golf, swim in the lake, or wander along one of the carefully marked walking and biking trails.

The art deco-inspired Hotel Brosundet sits along the water’s edge in Ålesund, a sea port town whose web of canals earned it the title, “Venice of the North.” After checking in and scoping out the cozy lounge fireplace and cool, modern bar, a receptionist will inform you that the hotel is, in fact, a restored cod drying warehouse from 1904, which explains the original wooden ceiling beams and prime location snug against the canal.

Brosundet no longer hangs fish from its ceilings, but it maintains strong ties to the seafood community with its five-star restaurant Maki, which is hailed for serving the best seafood in the country. The country. And since Norway is one of the world’s top exporters of seafood, it’s safe to assume Maki dishes out some of the best fish in the world.

One bite into your baked halibut entrée and you won’t be disagreeing. If your five-course dinner complete with French wine pairings, iced palate cleansers, and the friendliest staff you’ve ever met isn’t novel enough, ask if you can see the hotel’s 48th room. It’s an intimate space for just two in a short red lighthouse just five minutes’ walking distance from the property. 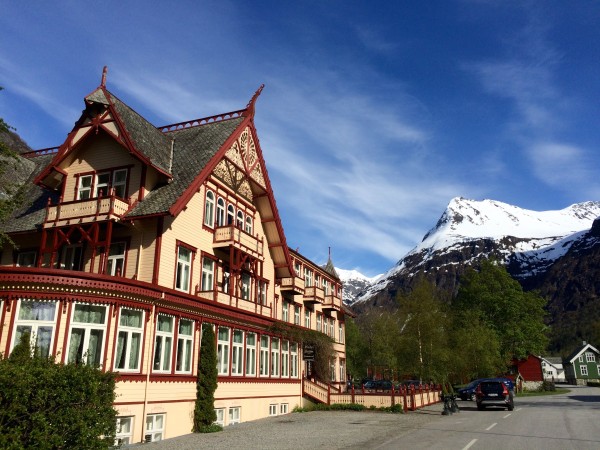 If you’ve ever wanted to know what it feels like to live in a fairytale world, take a trip to Hotel Union Øye. The idyllic hotel, built in 1891, sits between mountains on the edge of the sublime Hjørundfjord in the small village of Øye. It’s the type of place where candles and fires are lit year-round, TVs aren’t necessary, and the staff greet you wearing bunads, Norway’s traditional national costumes. Think long skirts, linen blouses, and embroidered vests.

The hotel has 27 rooms, each decked out with individual decor and antique furniture. Any rooms the hotel doesn’t rent out for the night are open for viewing, so you’re free to meander from room to room, stand behind red carpet ropes, and peek through the doorways at the four-poster beds, framed Renaissance paintings, and silk drapery. It’s like touring a chateau, but way more exciting because you know you’ll actually be sleeping there.

Each room is also named after a notable guest who once stayed in the hotel. While it’s exciting to think Queen Maud of Norway and famous Norwegian playwright Henrik Ibsen have slept there, the most interesting guest is the one who never left. If you stay in the “Blue Room,” where the ghost of a scorned lover named Linda supposedly hangs out in her free time, the staff will give you a bowl of onions to use to either summon Linda or ward her off. A bowl outside the door means come on in, while a bowl on the nightstand says — politely, of course — leave me alone.

Staying at Hotel Røisheim is a comfortable way to feel like you’re getting off the grid. There might not be a seamless Internet connection from your room, but you won’t care when you crash out on your cushy bed in an old horse stable after a full day of hiking and trekking. The hotel’s remote location near Jotunheimen National Park and the Galdhøpiggen Mountains makes it an ideal base for anyone who enjoys fresh air and a hearty jaunt through the wilderness.
The hotel property, which is comprised of 14 preserved coaching house and farmyard buildings from the 1700s, makes you feel like you stepped back in time a few hundred years for a secluded mountainside retreat.

The rooms have stone fireplaces, sheepskin blankets, and tall wooden bathtubs perfect for those of us who enjoy a leisurely sit while we bathe. The restaurant, with its incredible bevy of breakfast jams and homemade loose-leaf tea (from the actual local plants, no less), has the kind of cozy familiarity of an old bed and breakfast. In the evening though, the restaurant ups its game: expect four-course dinners with dishes like local lamb, roasted mushrooms drizzled with butter and tomato sauce, and riskrem, a popular Christmas dessert made from rice pudding, whipped cream, and sweet red cloudberry sauce. Yes, cloudberries.

Best place I’ve ever been for a workshop! #NorwegianWeddingBlog you did a gorgeous job! Never had such a delicious food during a workshop! #Konigswinger is the perfekt place to stay!

Staying at the Königs Winger Hotel is like stepping onto the scene of a Scandinavian war reenactment, but with way more glamour. Men donning 15th-century Norwegian military uniforms greet you with coordinated rifle salutes while local drum line groups practice on the grassy lawn.

The fortress-turned-design hotel was once a major part of Norway’s border fortification against Sweden in the late 1700s and early 1800s. Things have mellowed out now, but you can still bone up on your historical knowledge by checking out the war museum on-site.

In your downtime, you can also sip cava and champagne in the cellar below the lobby or take a walk along the fortress’ “outer curtain” to see a three-hundred-sixty degree view of the Glomma River and town of Kongsvinger.
If you’re curious to see where 11 of Norway’s 14 kings have set foot, dine at the hotel’s phenomenal restaurant, which serves delectable five-course meals and employs sophisticated, chatty servers whose impeccable service makes you feel like royalty.

Hotel Storfjord is the kind of hotel you visit and declare immediately to anyone who will listen that you’re never leaving. Ever. The property is perched on a hill overlooking the Sunnmøre Alps and magnificent Storfjord. The sheer beauty that is the combination of deep blue water and snow-capped mountains is reason enough to never leave the lounge chairs conveniently placed on the terrace.

The restaurant, which has the ambiance of a big family kitchen and the service of a Michelin-starred establishment, will serve you dishes like smoked salmon, local blue cheese with blackberry jam, and kvaefjordkake, a meringue and vanilla custard sponge cake that literally translates to “world’s best cake.” They are not wrong.