A DANCER SINCE CHILDHOOD, Lori Henry spent four years on the road meeting traditional dancers across Canada. Dancing Through History: In Search of the Stories That Define Canada compiles her travel stories about learning various traditional dances and connecting with those who taught them to her.

I asked Lori a few questions about her project. Here are some highlights:

Matador: What’s your background in dance?

LH: I was 2 years old when I took my first dance class — Polynesian dancing — so I grew up surrounded by music from other countries and cultures. I also studied ballet, tap, jazz, and modern as I got older, and have now taken at least one class in many other types of dancing!

What inspired the concept for this book, and how did it evolve along your travels?

Dancing Through History was a way for me to unite what I know best: travel and dance. I hadn’t mixed the two before, but realized that my dance background was pretty unique among travel writers. 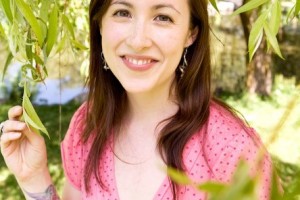 I wanted to explore how dance changed over time in parallel to the society around it, and ended up telling quite a bit of the history of Canada by doing so, from the aboriginal people who have lived here for thousands of years to the settlers who adopted Canada as their home, and the struggles between the two as land and cultural disputes flared.

Some locations in the book seem like unlikely places to explore dance. Were you already familiar with some of these traditional dances, or was this a journey of discovery for you?

What I learned was that wherever there are people, there’s a history of dance.

Every culture that I have come across uses dance in their own way, whether it is to celebrate the sun returning after months of darkness (in the Arctic), the Kozaks’ battle victories across Ukraine, a Cirque du Soleil performer doing the impossible, an Inuit boy’s first polar bear kill, or the tiny footwork of the Gaelic settlers in Cape Breton. There is always a story and usually a dance to accompany it. In that sense, there really is no unusual place to discover dance. Even if that dance has been banned, as it often was with the aboriginal peoples of Canada, its history now lives on in the people who kept the tradition alive.

I didn’t know very much about the dances I covered in the book, but by learning them myself and speaking with those who are passionate about passing them down, I was given a window on who these cultures were and who they are now. How did they get here? What did they go through? They tell these stories through their dances.

What can you learn about a culture through its traditional dances? How has dancing opened your eyes to a new element of a local culture in a way you may not have experienced as a more typical traveler?

There were no language barriers while traveling across Canada, as everyone I talked to spoke English. But sometimes speaking the same language poses its own barriers and upholds preconceived notions.

Along with learning the stories in the dances that tell more about a culture than any words can, dance also breaks down the walls we construct around ourselves and allows us to open up to one another, go deeper into conversations that we would rather shy away from, and start discussions that might otherwise be left unsaid. 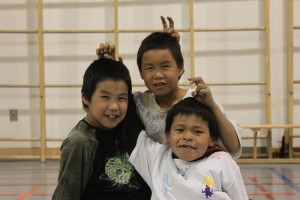 Kids fooling around at the Alianait Arts Festival. Photo courtesy of Lori Henry.

An example of this is my time in Skidegate, a Haida community in Haida Gwaii (a remote set of islands off the northwestern coast of British Columbia). Walking into the small community as an outsider and a non-Haida, I could have been met with resistance and a questioning of my motives. Aboriginal and non-aboriginal relations here in Canada are nowhere near healed and, as a non-aboriginal person myself, I couldn’t just walk in and start asking questions and expecting them to tell me everything about their culture.

Potlatches, for example, were outright banned in Canada, which is a (justifiably) sensitive topic, as is the history of residential schools (where the government took aboriginal children away from their homes and put them in English-speaking schools to “take the Indian out of them”). But after talking about dance with some Haida dancers, I was invited to witness their rehearsals and interview them about their culture and history.

These are stories that all Canadians, and people all over the world, should hear, the voices that have been left out of history books and often still in current debates. Dance allowed me to break down that initial barrier…and I was given permission to include parts of the resultant conversations in the book, for which I am eternally grateful.

As for travel advice, was there any one place you’d strongly recommend a non-dancing traveler to visit?

Cape Breton! It’s an island in the Maritime province of Nova Scotia that bleeds fiddle tunes and step dancing. Even non-dancers can get caught up in their nightly square dances during the summer, where everyone gathers to get sweaty in community halls.

Even if a language difference is in the way, or religious beliefs or age or surroundings, we can all still dance together.

During the day, there are great surfing spots, many chances to get out on the water, to eat lobster meals, drive the Cabot Trail, and hear English, Gaelic, and Acadian being spoken. Hospitality in Canada is pretty warm and generous, but the Cape Bretoners have won me over more than anyone else.

Saying that, if you can afford it, get up north! Not even many Canadians get to do so, but northern Canada is beyond words. Trust me, it’s my job to try to describe my travels up there, but I can’t begin to do it justice. The scenery makes me remember how small I am in the world, the polar bears and walruses remind me that I have to live with wildlife, to respect them; above all, the people are eccentric, generous, reclusive, social, warm, welcoming, and full of the most bizarre stories you’ll hear anywhere.

Was there one dance that resonated more with you than any other?

Métis dancing felt really close to home. The Métis people are a mix of First Nations women and settler men who came to Canada, mostly from Europe and the UK. Their children are called Métis, “mixed,” as they belong to both worlds. I come from a mixed family myself — my mother is Chinese and my father is multiple-generations Canadian, from the UK.

The Métis dance that I write about most in Dancing Through History is the Red River Jig, what some call their National Dance. It’s a combination of two very different cultures in one, the Métis Nation. I constantly struggle with dual identities, as do many mixed-race individuals, and I somehow feel like I understand, not the specific fight of the Métis, but the general effort to stand up for who I am and where I came from, to live harmoniously within two cultures. In that way, Métis dancing really resonates with me.

Why was it important for you to write this book and approach travel in this way?

I realized that after being a travel writer for a handful of years and covering trips in a general way, I wanted to write about more than where the best places to stay are and which spas give the best massages. Those things are important, too, because they are the nuts and bolts to help people plan trips, but travel itself is not about those things, it’s about crossing paths with people who live differently than ourselves and sharing our differences so that we can embrace our similarities.

Dancing while I travel is a way for me to do that, to share other cultures with readers, to learn about them myself and, therefore, better understand the world. Even if a language difference is in the way, or religious beliefs or age or surroundings, we can all still dance together.

My next book will tackle Maori dance and culture in New Zealand, beyond the haka what you see from the All Blacks rugby team.

I’ve grown up learning Maori songs and dances since I was two years old and am now back taking classes with the same teacher who taught me back then. Although I still know the songs and dances, as an adult, I’m now learning what they mean, why they’re important, their historical story, and how they’ve changed over the years.

Tagged
Miscellaneous Canada
What did you think of this story?
Meh
Good
Awesome