BEIRUT, Lebanon — Protesters clashed with police in central Beirut for a second night on Sunday, as a campaign that began with demands to solve an ongoing trash problem developed into a major crisis for the Lebanese government.

Formed in mid-July as a response to garbage piling up in the streets of the capital, the “You Stink” movement has gained momentum over the past few weeks, galvanizing a weary public that has grown sick of government inaction and corruption.

Several thousand people turned out for the demonstration on Sunday — the largest public action in Lebanon in many years — a day after security forces fired tear gas and rubber bullets to disperse protesters in central Beirut.

Whereas on Saturday police were quick to fire into the air and use tear gas to move protesters along, Sunday’s protest began peacefully. After being pelted with water bottles and other objects by a small section of the crowd, however, police again responded with water cannons and tear gas.

The fighting then escalated into the same back-and-forth between crowds and police seen on Saturday. Protesters damaged property and lit fires in central Beirut. When the army was called in after midnight, the few remaining protesters still out in the streets scattered.

More than 400 protesters were injured over the weekend, including one seriously. Lebanon’s Internal Security Forces said 99 police officers were hurt, and that 32 “rioters” were arrested. 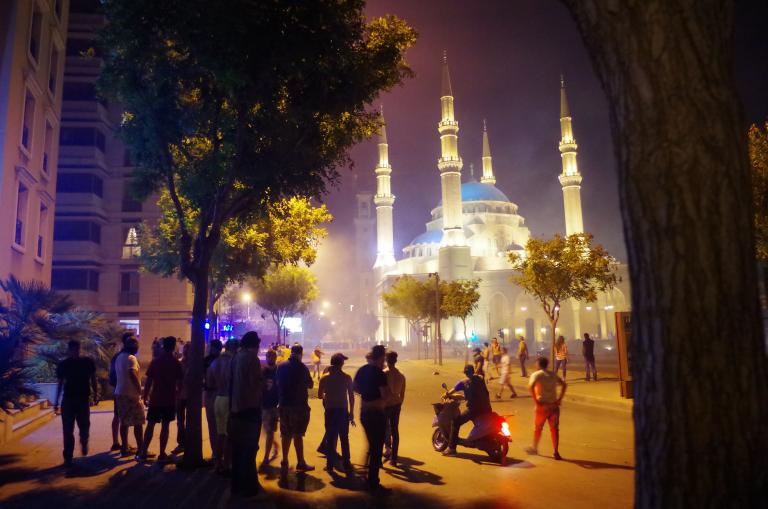 This isn’t just about garbage

The You Stink campaign was formed in response to trash piling up on the streets of Beirut after the city landfill closed. Environmental campaigners had warned that the country’s largest landfill site was full for some time now, yet no preparations for an alternative site were made.

Mountains of garbage appeared in the streets, alongside homes, schools and hospitals. The country’s health minister, Wael Abu Faour, warned of a “health catastrophe.”

Trash collection has resumed since then, but what happens to that trash is still a big problem: In lieu of a suitable disposal plant, illegal dumps have been sprouting up around the country. People have taken to burning trash, and there have been reports of trucks dumping waste into valleys and other open spaces.

Protests have grown as the campaign has widened its demands to address not just the garbage, but a whole list of other issues that they see rooted in a weak government.

The list is a long one: Lebanon has been without a president for more than a year, electricity is intermittent at best, corruption is rife, the country is hosting more than a million refugees and militants from Syria threaten the country’s eastern border. Underpinning all of this, protesters say, is the sectarian nature of the country’s leaders.

More than 20 parliamentary sessions have been held to elect a president, but the country’s major political blocs have been unable to agree on a candidate. Parliament has extended its mandate twice — the last election took place in 2009.

The result has been gridlock in government, and a very angry public.

“People are fed up,” said Tamara Qiblawi, a Lebanese journalist who has been attending the protests. “The trash crisis is the straw that broke the camel’s back. It is the most obvious sign that the government is not just incompetent, but has a vested interest in the public’s demise.”

The government response to the protests has been varied, with each of Lebanon’s political groups seeking to play the protests up or down, depending on their aims.

Speaking on Sunday, Lebanese Prime Minister Tammaam Salam threatened to resign, chastising the police for their heavy-handed response and government ministers for their inability to fix the many problems facing Lebanon.

In a sign that the protests were having an effect, the cabinet announced an emergency meeting on Tuesday to address the garbage crisis.

The country’s environment minister, Mohammed al-Mashnouq, also announced that a contract had been awarded to two companies to deal with Beirut’s trash. He added that he hoped the announcement would be a “happy ending” to the problem.

However much the country’s leaders want the protests to end, it seems unlikely that the You Stink movement is done fighting.
You Stink rejected the measures announced by Mashnouq at a press conference on Monday, and called for more protests next Saturday.

“The fact that the Cabinet seized the Independent Municipal Fund transforms the bids into a looting and robbery procedure,” said Marwan Maalouf, a representative of the campaign.

“You Stink is a peaceful, non-political, non-sectarian movement, and it has succeeded in waking citizens up and mobilizing them to fight for their rights,” he said.

Violent police response to the protests has fueled public anger, and the campaign has struck a chord among many Lebanese. The group does, however, face a number of significant challenges.

You Stink has called for the resignation of the government and new parliamentary elections, but due to the sectarian Lebanese political system, it is unlikely another election would yield a significantly different result without a change to the voting law.

Lebanon has 18 officially recognized sects, among whom power is delicately balanced, and that balance enshrined in law. That law stipulates that the country’s president must be Christian, the prime minister Sunni and the speaker of parliament Shia.

Lebanon’s political parties are thus divided along sectarian lines, and the voting follows. Any political movement hoping to change the system in Lebanon — as the You Stink campaigners do — is up against a deeply entrenched voting system that is unlikely to change. In a sense, the very cause of the government’s dysfunction is the same thing that sustains it.

Another night of clashes between police and protesters. Went on past midnight until the army rolled in to Martyrs Square. #Beirut #youstink

The movement has also sparked a debate about Lebanon’s other great divide: class.

Many protesters, including some of the organizers, have distanced themselves from those who clashed with police, describing them as “infiltrators” and “thugs” sent by sectarian leaders to discredit the campaign. Some pointed out that the people doing the fighting were dressed differently — meaning, poorly.

Others countered that the comments reflect prejudice against working-class protesters.

“Problem with some Lebanese is that they consider poor people thugs. We now have a dress code for our protests? Should I wear heels?” wrote Rana Harbi on Twitter.

“Next time we will bring our yoga mats and say no shirtless people with tattoos allowed” commented So Raya on the You Stink Facebook page.

These divisions aside, the You Stink movement represents perhaps the largest non-sectarian campaign of civil disobedience in a decade. The next few months will determine whether the campaign can harness public anger for real change.

By Richard Hall, GlobalPost
This article is syndicated from GlobalPost.

Tagged
Activism Lebanon
What did you think of this story?
Meh
Good
Awesome

Why You Need To Go Skiing in Lebanon

Celebrities and Activists Call for Equality for Lebanon's LGBT Community

8 Things You Can Only Experience in Lebanon