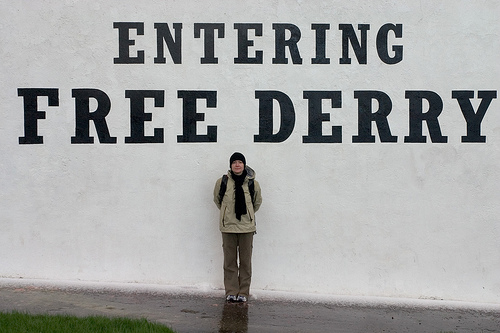 The people of Northern Ireland have been hitting the streets this week to protest the recent murders of two soldiers and a police officer.

The killings come after several years of progress towards stability and peace; the Real IRA and the Continuity IRA, both rebel splinters of the Irish Republican Army that reject the peace process, have claimed responsibility. Harsh condemnation has come quickly from political leaders in London, Dublin and Belfast, and even the Pope has weighed in, describing the murders as “abominable acts of terrorism”.

More than 10,000 people have turned out for marches and silent vigils.

They have come to show solidarity, I believe, with the police and to send a very clear message out to the people who killed Constable Stephen Carroll and the two soldiers that they do not represent them.

British politicians have attempted to frame the attacks as a last-ditch attempt to disrupt the peace process by a fringe refusing to accept that things have changed for the better.

Here’s hoping that they’re right — and that these murders remain a blip on the post-Good Friday timeline, rather than the renewal of violence in Northern Ireland.

Tagged
News United Kingdom
What did you think of this story?
Meh
Good
Awesome

Japan will partially pay for domestic travel so you can explore more of the country Dutch government recommends single people have a sex buddy during the lockdown New bill requires airlines to refund your money even if you cancel your flight Portugal is reopening to tourists from these countries, without a two-week quarantine Discarded face masks and gloves are posing a serious risk to marine life

This Scottish national park is getting its own whisky distillery

This spring, visit one of the largest working kitchen gardens in England’s Peak District

The story of Ireland starts in lesser-known County Down, Northern Ireland