AMAZON RAINFOREST, Ecuador — IN ONE OF THE MOST ECOLOGICALLY diverse corners of the planet, a small tribe is fending off oil corporations that want to drill their ancestral land.

It takes first a bumpy 20-minute drive from the city of Tena, then a two-hour journey on a rudimentary canoe to meet the Daya family, one of the few Huaorani communities in the Amazon rainforest who have not yet abandoned their traditional ways.

For most of modern history, this indigenous group lived away from other populations, uncontacted. Missionaries first approached the Huaoranis, who now number about 4,000 people, in the late 1950s. 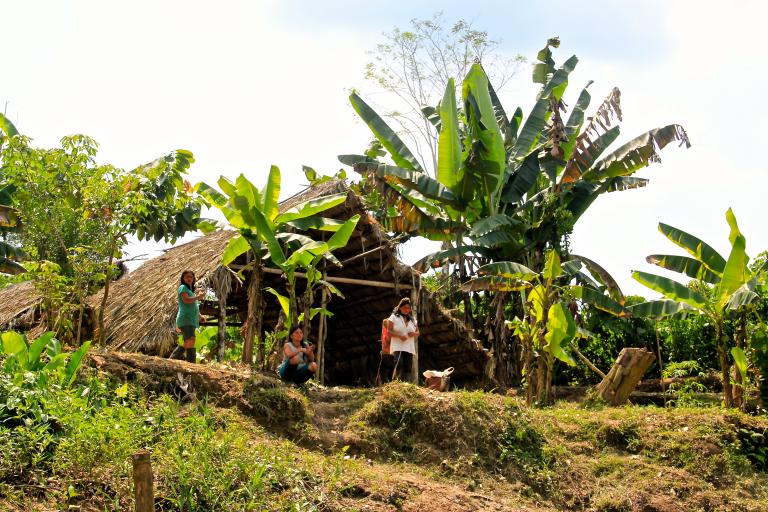 Today, international oil companies in the Amazon have fundamentally disrupted the Huaoranis’ way of life. They have displaced many indigenous communities — who live in family groups throughout the rainforest — in order to drill the ground beneath them.

In Ecuador, oil corporations have promised indigenous groups food, clothes, cash and even weapons for their cooperation. In 1991, a young group of Huaoranis educated outside their community created the Organization of the Huaorani Nationality of the Ecuadorian Amazon, which inked an agreement with oil companies that allowed wide access to Huaorani land.

While the oil trade brought new wealth to the locals, it also came at a steep cost. The industry vastly changed local culture and practices,​ and beyond that has threatened the Huaoranis’ very existence. Industrial pollutants have both contaminated water and caused diseases like cancer. 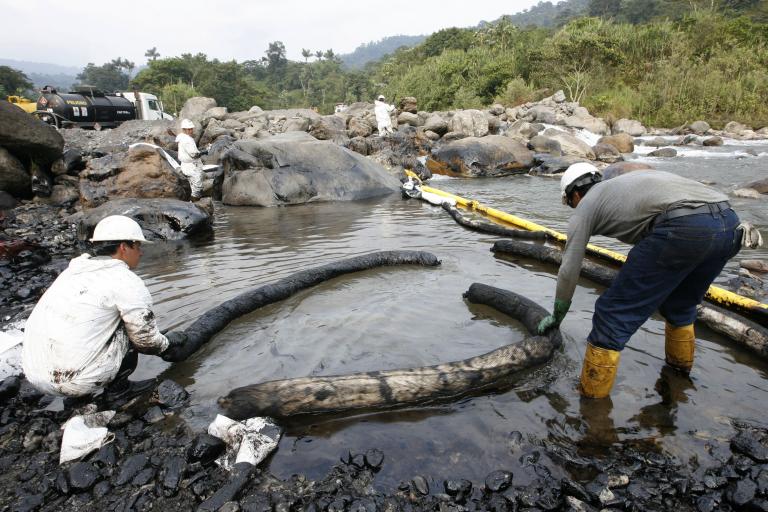 Photo: Workers clean an oil spill on the Santa Rosa river in 2009. Ecuador’s second largest oil pipeline ruptured in the lush Amazon jungle, shutting off the flow of crude to a Pacific port.
Kamilia Lahrichi/GlobalPost

But unlike many Huaoranis to date, the insular Daya family says they won’t be bought.

They are the face of indigenous resistance against the oil industry. Instead of accepting corporate handouts, they sell traditional crafts and bags made of banana leaves to the curious souls eco-tourism agencies bring to the area.

Dressed in a T-shirt, jeans and rubber boots, Kawo is the only family member wearing Western clothes. She is their liaison to the tourist industry, who works with local guides to bring in visitors interested in meeting indigenous tribes faithful to their customs. The family also ​sells fish to local markets in Tena. 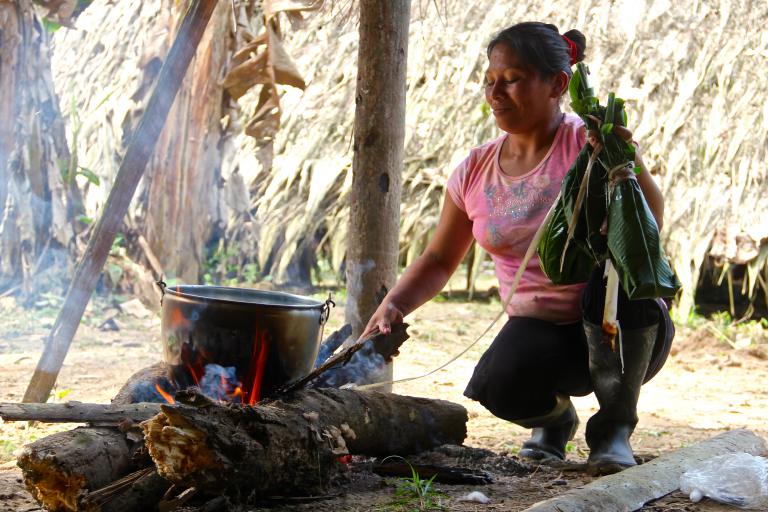 Photo: Kawo, the other daughter of the family, wears Western clothes because she is regularly in contact with tourists in the Amazonia rainforest. She is cooking a traditional fish wrapped in a bijao leave (called “maito de pescado” in Spanish), a typical dish of the Amazon region.
Kamilia Lahrichi/GlobalPost

While they’re unique among the Huaoranis, the Dayas’ struggle to resist the influence of oil companies is emblematic of the crusade most of Ecuador’s indigenous communities are waging against multinational companies to preserve their native land.

The battle is unequal.

In August 2013, Ecuador’s President Rafael Correa gave the green light to oil corporations to drill in the Amazon’s Yasuni National Park — a place with more flora than anywhere else in the world.

To do so, he axed a key initiative — the Yasuni Ishpingo-Tambococha-Tiputini (ITT) — that had previously prevented companies from extracting oil from the park in exchange for international donations totaling $3.6 billion.

On the three-hour walk across the rainforest back to Tena, Ngaya Nenkimo, the head of the Daya family, suddenly pauses to admire the beauty that surrounds him.

The animist man sits on a tree trunk and watches the sky. “This is everything we have,” he whispers, in broken Spanish. 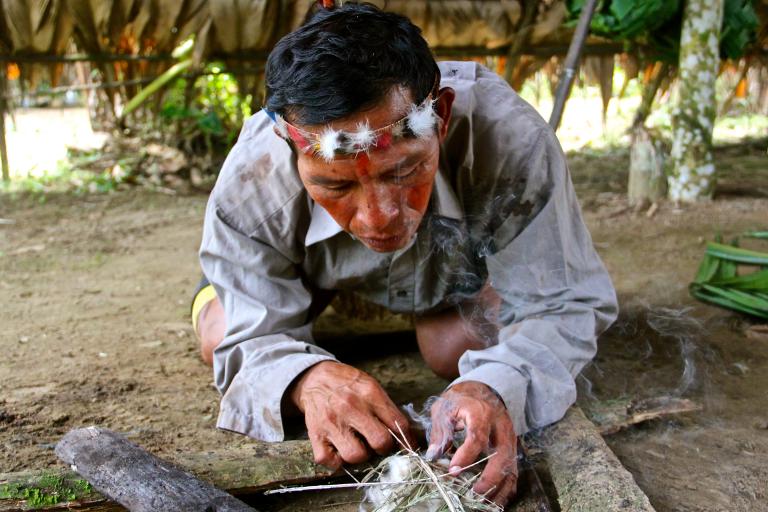 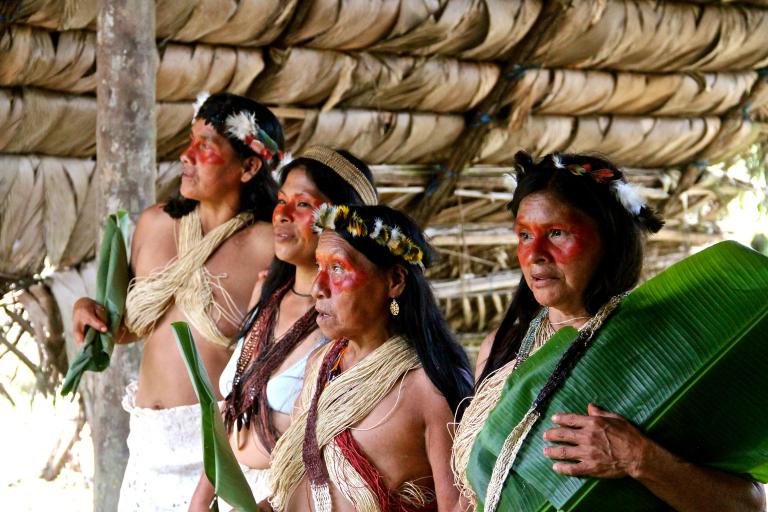 Photo: Women of the Daya family sing a traditional welcome song in the Huao language: “You are like brothers to us although you are not family. Our own family does not go that far to visit us so we consider you as family.”
Kamilia Lahrichi/GlobalPost 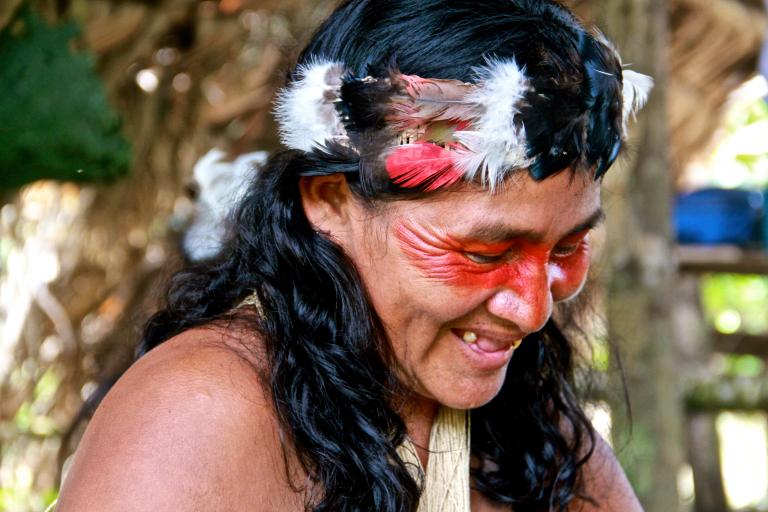 Photo: ​Kyenyé, Ngaya Nenkimo’s first wife. Red face paint marks her as a “friend of the forest.” Living in harmony with nature is crucial for this animist tribe.
Kamilia Lahrichi/GlobalPost 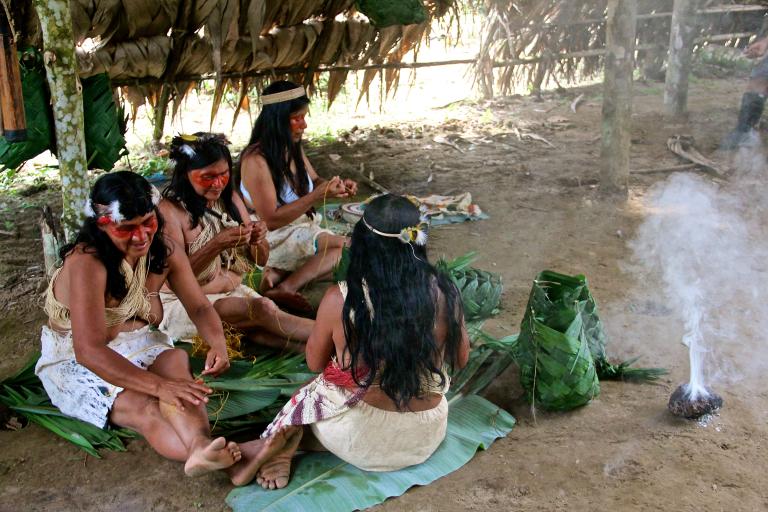 Photo: Kyenyé and the other women of the Daya family make traditional bags with banana leaves. The women manage to survive by selling crafts, mainly bracelets and wooden table mats, to eco-tourists. They sit next to smoke to ward off mosquitoes.
Kamilia Lahrichi/GlobalPost 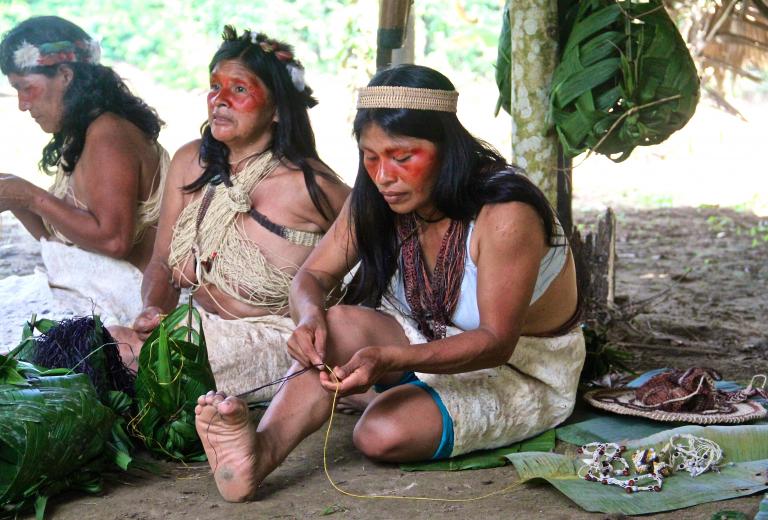 Photo: Yama, one of the two daughters of the Daya family, is the only one to wear a Western bra. She got it “when she once got in touch with a city person from Ecuador,” says the local guide, Fausto.
Kamilia Lahrichi/GlobalPost 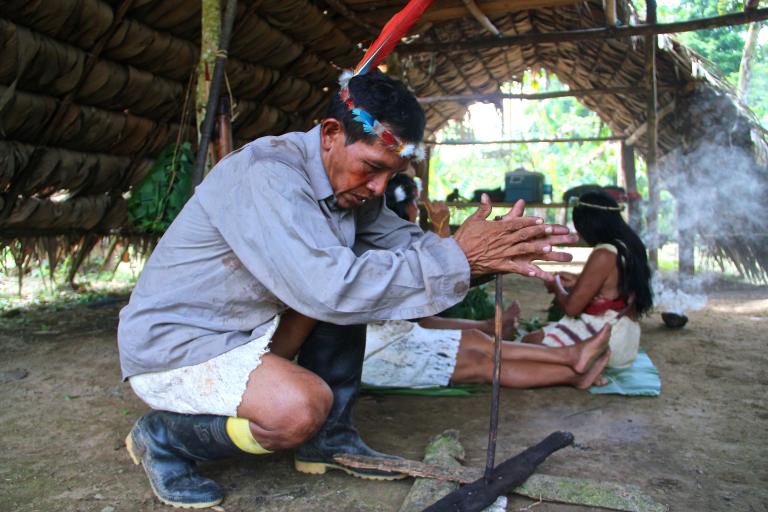 Photo: Ngaya Nenkimo shows the traditional way to light a fire with cotton and twigs. Since the 1950s, when missionaries approached Huaoranis for the first time, the indigenous community has resisted any attempt to modernize or Westernize, unlike many Huaoranis and other indigenous groups.
Kamilia Lahrichi/GlobalPost 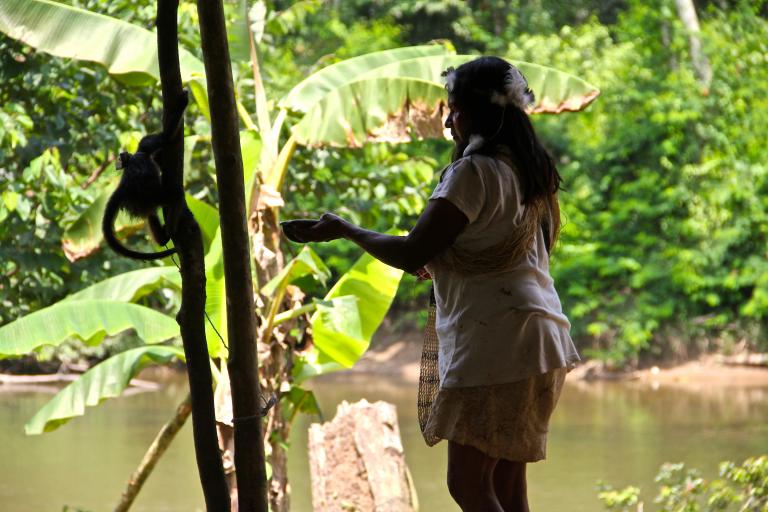 Photo: Mina, Ngaya Nenkimo’s youngest wife, feeds a young monkey the family rescued after it hit his head in a fall from a tree.
Kamilia Lahrichi/GlobalPost

by Kamilia Lahrichi, GlobalPost
This article is syndicated from GlobalPost.

Tagged
Culture Activism Ecuador
What did you think of this story?
Meh
Good
Awesome

23 signs you were born and raised in Ecuador