Remember the old days of border controls, immigration checks and passport requirements in Europe? No? Well, learn up quick because they may be coming back.

The Associated Press broke news today that the EU will bring back passport-required border controls. Members of the EU’s “Schengen Area” neither require passports nor have formal border controls in place. It’s been that way for about 20 years.

Then, the Middle Eastern refugee crisis overwhelmed borders and immigration centers. The refugee crisis — particularly acute in Greece — has persuaded Schengen members to invoke a little-known emergency clause that allows them to establish border controls for up to two years.

Since 1995, people have been able to cross borders among Schengen Area member countries without document checks. Each of the current 26 countries in the Schengen Area is allowed to unilaterally put up border controls for a maximum of six months, but that time limit can be extended for up to two years if a member is found to be failing to protect its borders.

The documents show that EU policy makers are preparing to make unprecedented use of an emergency provision by declaring that Greece is failing to sufficiently protect its border. Some 2,000 people are still arriving daily on Greek islands in smugglers’ boats from Turkey, most of them keen to move deeper into Europe to wealthier countries like Germany and Sweden.

Currently, six Schengen Area members have erected border controls to manage the refugee flow — Greece, Germany, France, Austria, Denmark and Norway. Those border controls will have to come down soon if the 2-year emergency clause isn’t enacted, which bring us to today’s news.

So what does this mean?

With no signs of the refugee crisis abating and assuming the emergency clause is indeed invoked, you will likely see border controls in place across most, if not all, countries in the Schengen Area. Visitors and EU residents alike will need to show a valid passport to cross borders. This is something Europe hasn’t done since 1995. There will be checkpoint lines and increased friction with incompetent bureaucracy. In other words, it will undoubtedly be a huge pain-in-the-ass for summer travelers. 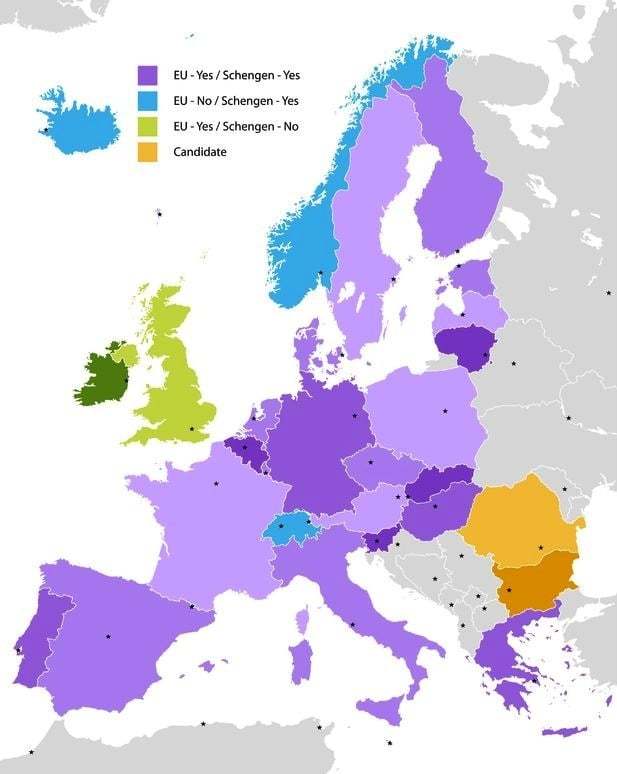 Going to the purple or blue ones? Don’t forget your passport!

Tagged
Travel Europe
What did you think of this story?
Meh
Good
Awesome