FOR SUCH A SMALL ISLAND, the United Kingdom produces a lot of incredible literature. Just walking around London alone, you can stumble through settings from Dickens, Shakespeare, and J.K. Rowling. Black Prince, a service that does narrowboat tours around the UK, has picked out some of their favorite spots for book fans to visit. 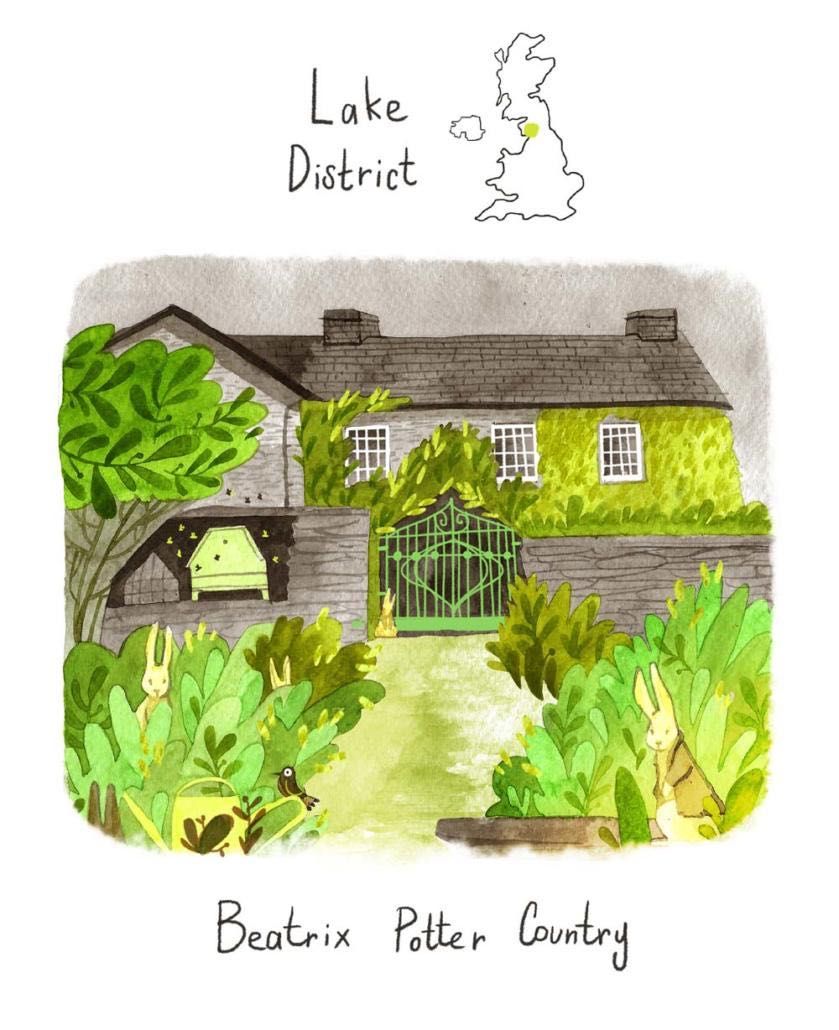 The scenic Lake District was home to Peter Rabbit creator, Beatrix Potter. The much-loved children’s author was inspired by the English landscape in her writing. Potter’s first home in the Lakes, known as the House on the Hill is now managed by the National Trust and you can visit the very place where Potter got the inspiration for some of her famous tales. Plus, you can pay a visit to The World of Beatrix Potter museum in Windermere where you can step into the world of Peter Rabbit and even enjoy some tasty treats in the Beatrix Potter tea room. 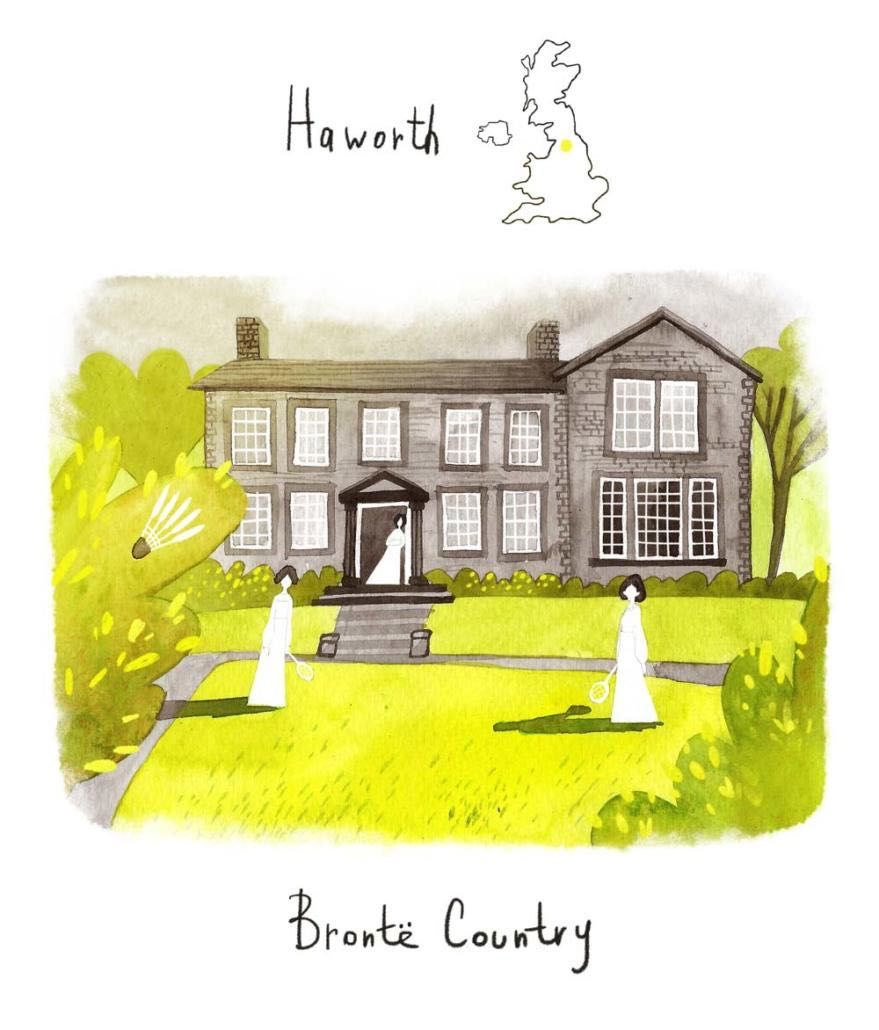 The small town of Haworth in West Yorkshire is the home of the famous Brontë sisters. The trio – Charlotte, Emily and Anne – are responsible for some of the greatest works of literature, including Jayne Eyre and Wuthering Heights. You can visit the sisters’ childhood home at the Brontë Parsonage Museum. The museum holds vast collections of the Brontë sisters’ work as well as exhibitions giving an insight into the lives of the sisters. Plus make sure to stop by, or even stay in, the quaint Ponden Hall – a place the Brontë children visited often, which is believed to have been part of the inspiration for Emily’s Wuthering Heights. 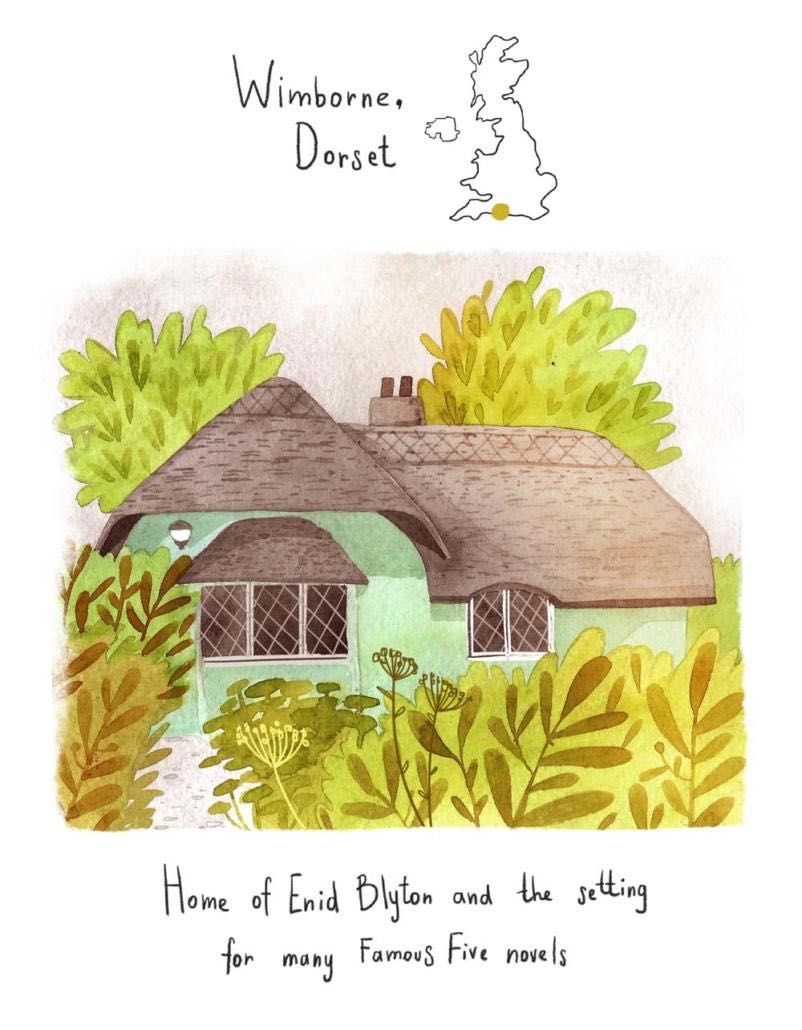 2017 marks 75 years since the release of the first Famous Five novel. The beloved author of the iconic series, Enid Blyton lived in the pretty market town of Wimborne in East Dorset. Blyton loved her home in Wimborne and it is believed that the town was the inspiration and setting for many Famous Five novels. Explore the small town and take in the pretty thatched cottages, historical architecture and beautiful countryside. 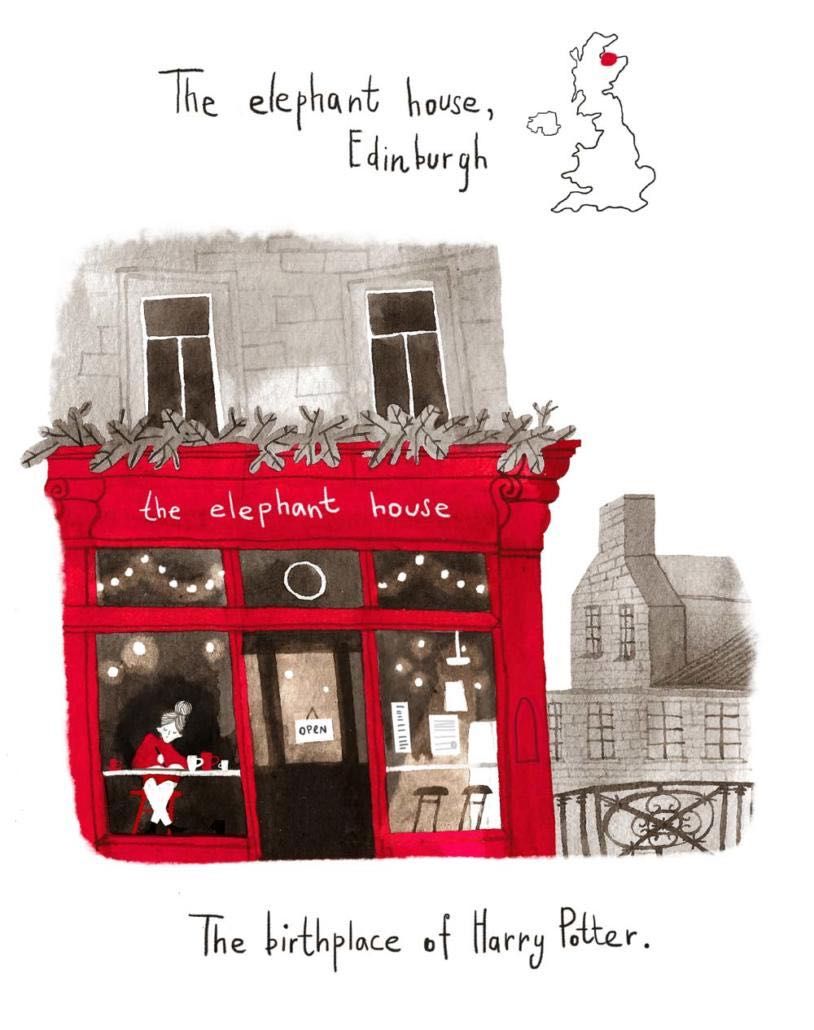 Edinburgh is the city in which the magical tale of Harry Potter took shape. Author J.K. Rowling sat in The Elephant House café as an unemployed single mother, and crafted the now world-famous tale which has changed the lives of its fans and the author herself. The café is proud of its connection with the children’s novel and hails itself as the Birthplace of Harry Potter. The café is not only an iconic spot for any Potter fanatics, but it is also a reminder that dreams really can come true and there is always time to chase after your ambitions. The café is also well located in the city centre, perfect for exploring everything else the beautiful city of Edinburgh has to offer. 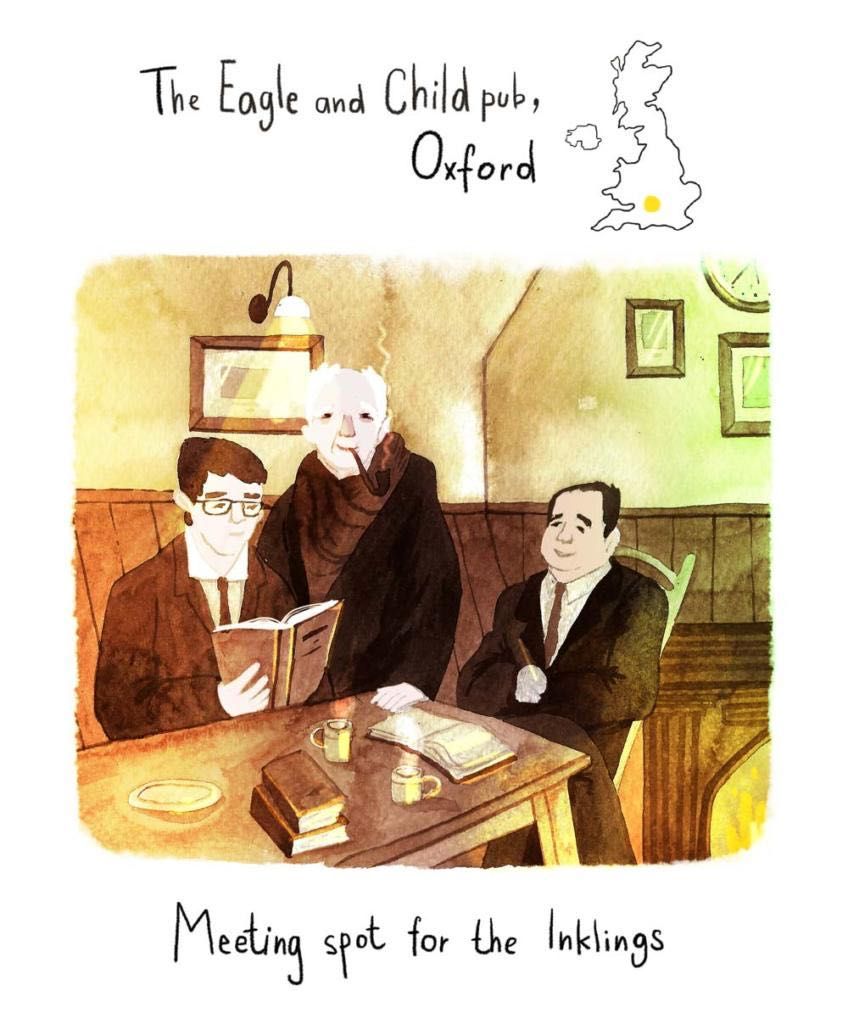 When thinking of a UK literature break, Oxford is surely one of the first destinations to spring to mind. The historic city with its esteemed university carries an aura of intellect, and has of course been home to many talented writers over the years. So much so that the University of Oxford had a literature discussion group which included famous names such as J.R.R. Tolkien and C.S. Lewis. The group’s meeting spot was the Eagle and Child Pub, which remains open to this today. So for a truly authentic UK literature break, stop in to the Eagle and Child Pub and turn the discussion towards your favorite novel. 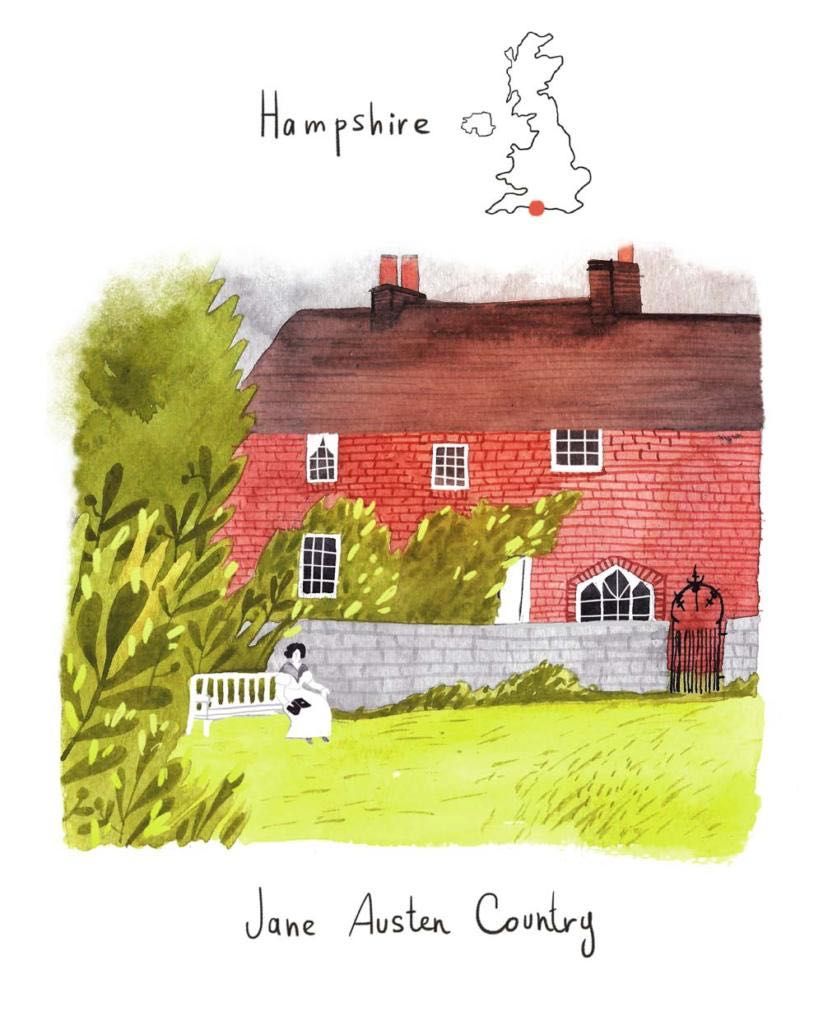 People often associate Bath as the city which was home to Jane Austen, however the Pride and Prejudice author in fact spent the majority of her life around Hampshire. Austen lived in Hampshire for the first 25 years of her life in Steventon. When she returned to Hampshire from Bath she lived first in Southampton and then Chawton. Many of Austen’s most famous novels, including Pride and Prejudice, Emma, Mansfield Park and Sense and Sensibility, were inspired by the Hampshire setting and lifestyle. You can visit the Jane Austen’s House Museum which was the Hampshire home of Jane Austen for the last 8 years of her life. In 2017 Hampshire will be celebrating Jane’s life for the 200th anniversary of her death with a calendar of special events. 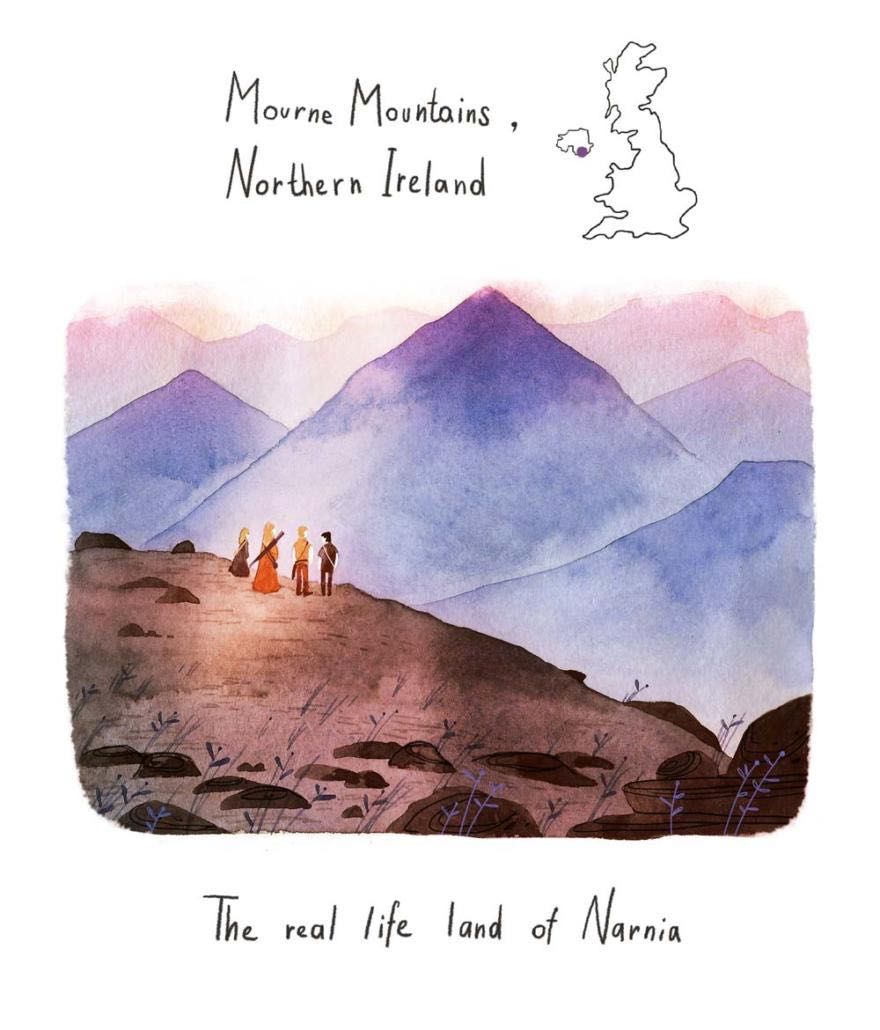 The striking Mourne Mountains in Northern Ireland are hailed as the real-life Narnia and are believed to be the inspiration behind C.S. Lewis’ magical land. Lewis was born in Belfast and he made no secret of his love for the Northern Irish landscapes. He once wrote, ‘I have seen landscapes, notably in the Mourne Mountains and southwards which under a particular light made me feel that at any moment a giant might raise his head over the next ridge.’ When witnessing the mountains for yourself it’s easy to see how they could inspire magic. 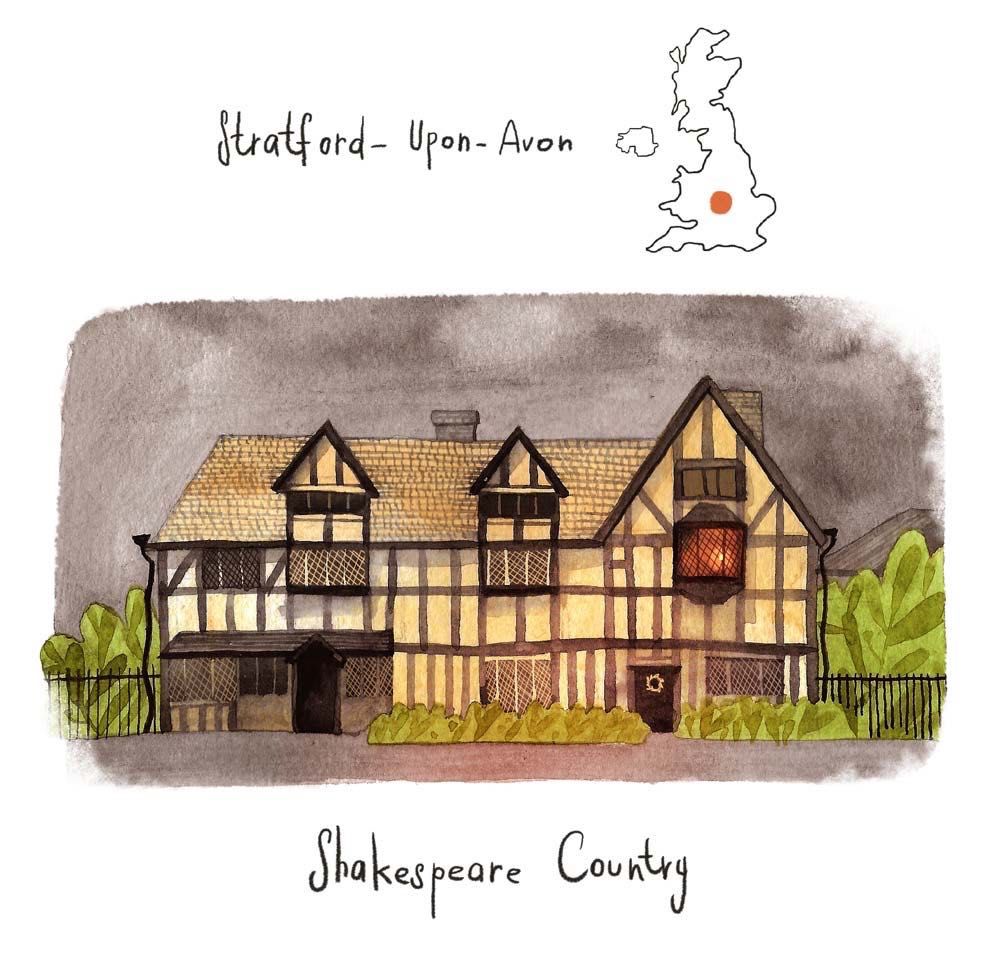 Stratford-upon-Avon is home to arguably the most famous British writer of all time – William Shakespeare. The iconic playwright was born in the quaint town in 1564 and lived there through his childhood years. You can visit the Bard’s birthplace while in Stratford, a town which still retains its historic charm and celebrates its connection with Shakespeare. Of course another must-do when in Stratford is to attend a Shakespeare place. The Royal Shakespeare Company runs a wonderful calendar of productions in the town through the year. 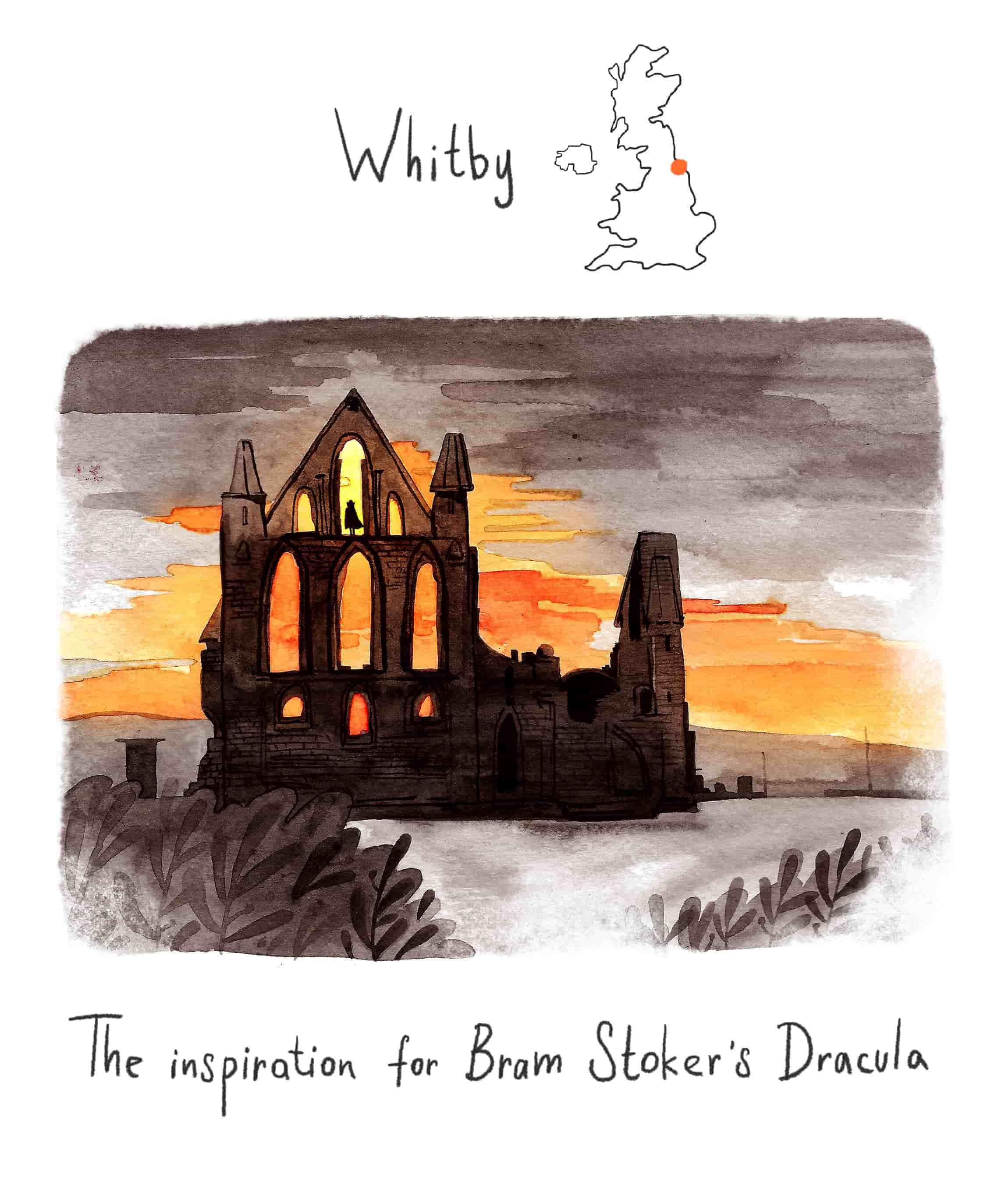 The Yorkshire seaside town of Whitby was the inspiration for Bram Stoker’s Dracula. The dramatic skyline of the haunting Whitby Abbey makes for the perfect backdrop for Stoker’s vampire tale, and it’s easy to see where he got his inspiration from the daunting building. Standing on the pavement outside the Royal Hotel on Whitby’s West Cliff you can take in the very same view which Stoker had himself over 100 years ago. The town is keen to celebrate itself as the birthplace of Dracula and you’ll find plenty of fun events and tours to enjoy during your visit, including The Dracula Experience Tour. Elsewhere, make sure to tuck into some tasty fish and chips which the town is also renowned for and work it off with a climb up the 199 steps to the Abbey. 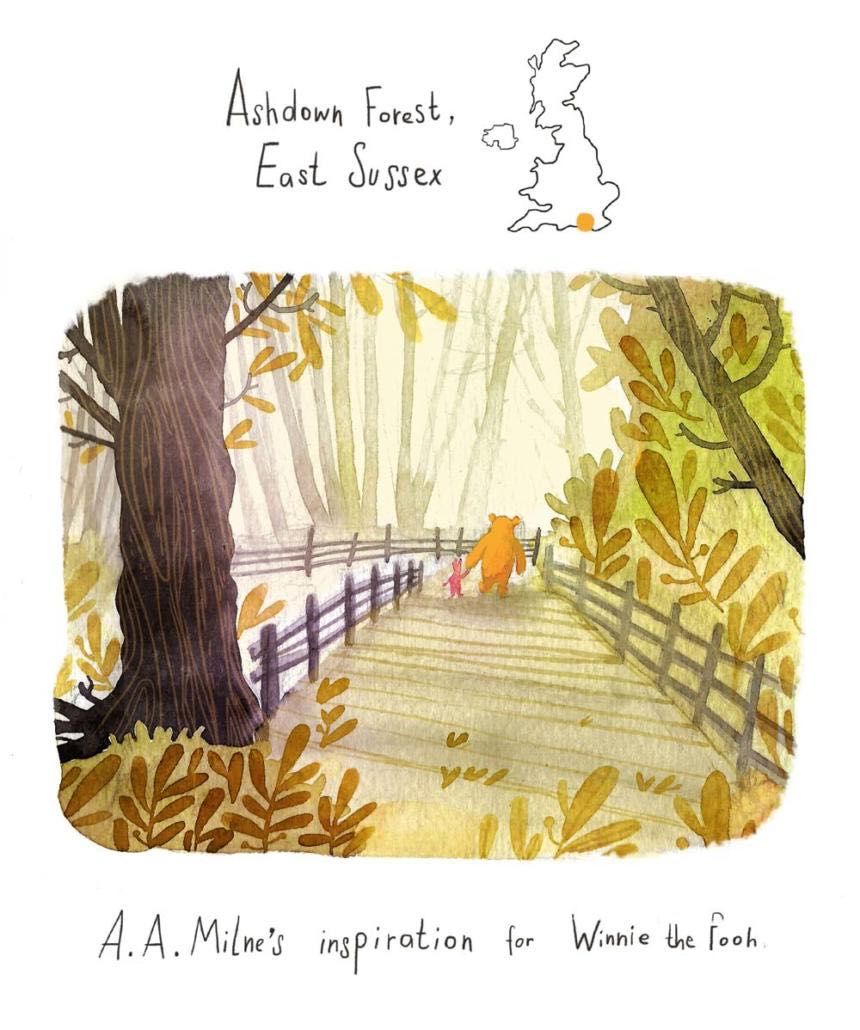 One of the most famous fictional woods of all time, Acre Wood home to Winnie the Pooh, can actually be visited in real life. The woods which are featured in the classic adventures of Winnie the Pooh, was inspired by Ashdown Forest in East Sussex – and the similarities are strikingly clear. A.A. Milne’s son Christopher has even claimed that Ashdown Forest is identical to Pooh’s forest. 100 Acre Wood is in fact based on the real-life Five Hundred Acre Wood which is situated in Ashdown Forest. Other notable points include the bare hilltop of Gills Lap which inspired Galleons Leap in the Pooh tales and the footbridge across the River Medway in Posingford Wood, which is where poohsticks was first played. A visit to Ashdown Forest is like stepping into the pages of a storybook.

This post was originally published at Black Prince, and is reprinted here with permission.

Tagged
Maps + Infographics United Kingdom
What did you think of this story?
Meh
Good
Awesome