Admit it — Dominica probably isn’t on your travel radar yet. Hey, you may not even know how to pronounce it (say it with us: dom-in-EE-ka). But this Caribbean island oasis is getting more and more props thanks to its untouched forests, volcanic landscapes, and the incredible adventures it has to offer.

Even if you’ve heard of Dominica before, even if you can point it out on a map, these 11 facts are bound to surprise you. Pretty soon you won’t be able to get it out of your head…until you make the journey yourself.

1. It’s definitely not the Dominican Republic. 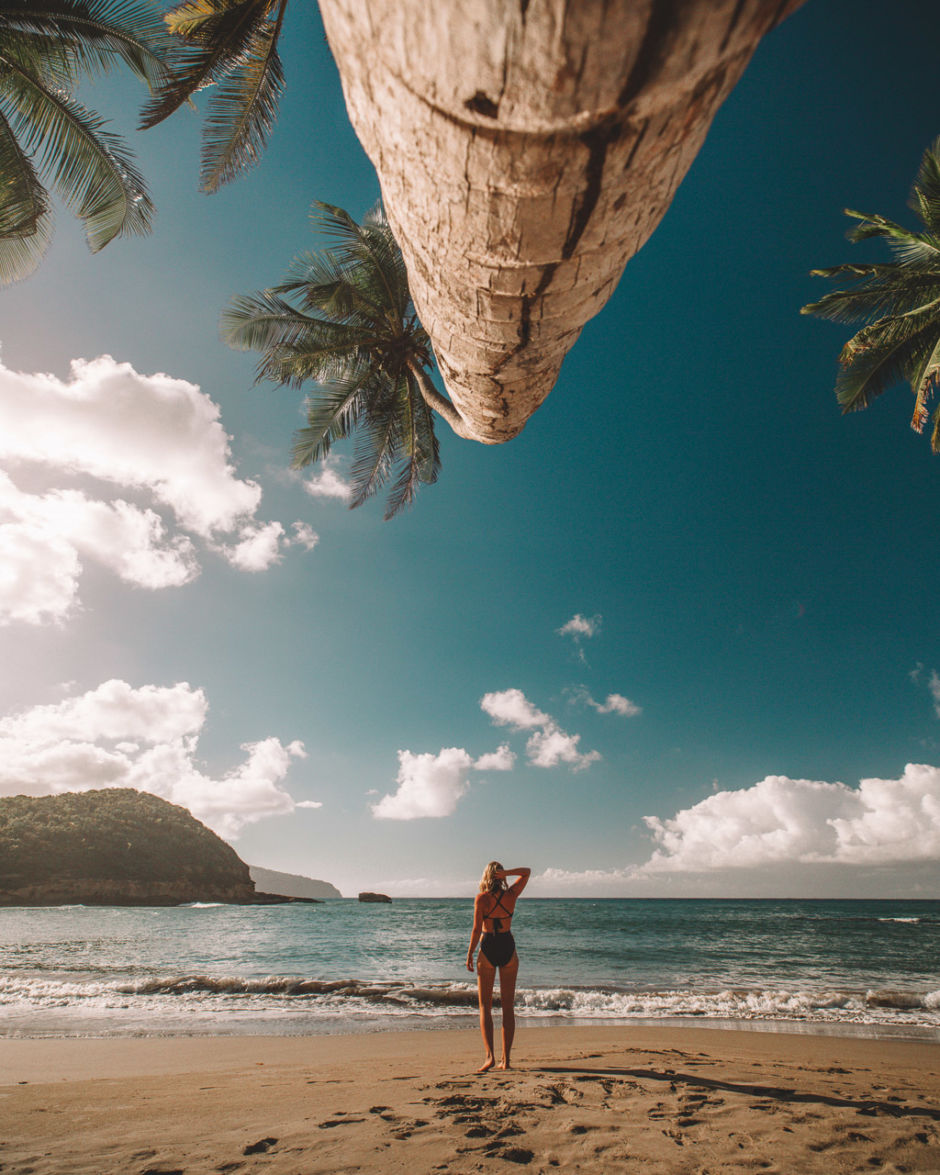 When you say Dominica, almost everyone thinks you mean the Dominican Republic — but Dominica is its own island in the Caribbean, technically a part of the Lesser Antilles, over 600 miles away from that “other half” of Hispaniola.

The Commonwealth of Dominica has been an independent country since 1978; the currency is the Eastern Caribbean dollar and the official language is English. You’ll also hear Creole spoken on the island — a mix of French, African, and Kalinago — hinting at a colonial past. Its people are mostly descendants of enslaved Africans and Island Caribs, though you’ll find little expat communities starting to grow on the coasts.

One cool fact about Dominica is that Island Caribs, natives of the Greater and Lesser Antilles, still reside here today. They were the first inhabitants of the island and are known today as the Kalinago people. They named Dominica Wait’tukubuli, meaning “Tall is her body.”

Today, there are about 3,000 living on the island, representing the largest native population in the region. Most reside in the Kalinago Territory, where you can visit the Kalinago Barana Aute, a model village. Just remember to do so respectfully. Handmade crafts will be for sale, and you can observe traditional festivals, rituals, and dances.

3. There are nine volcanoes. 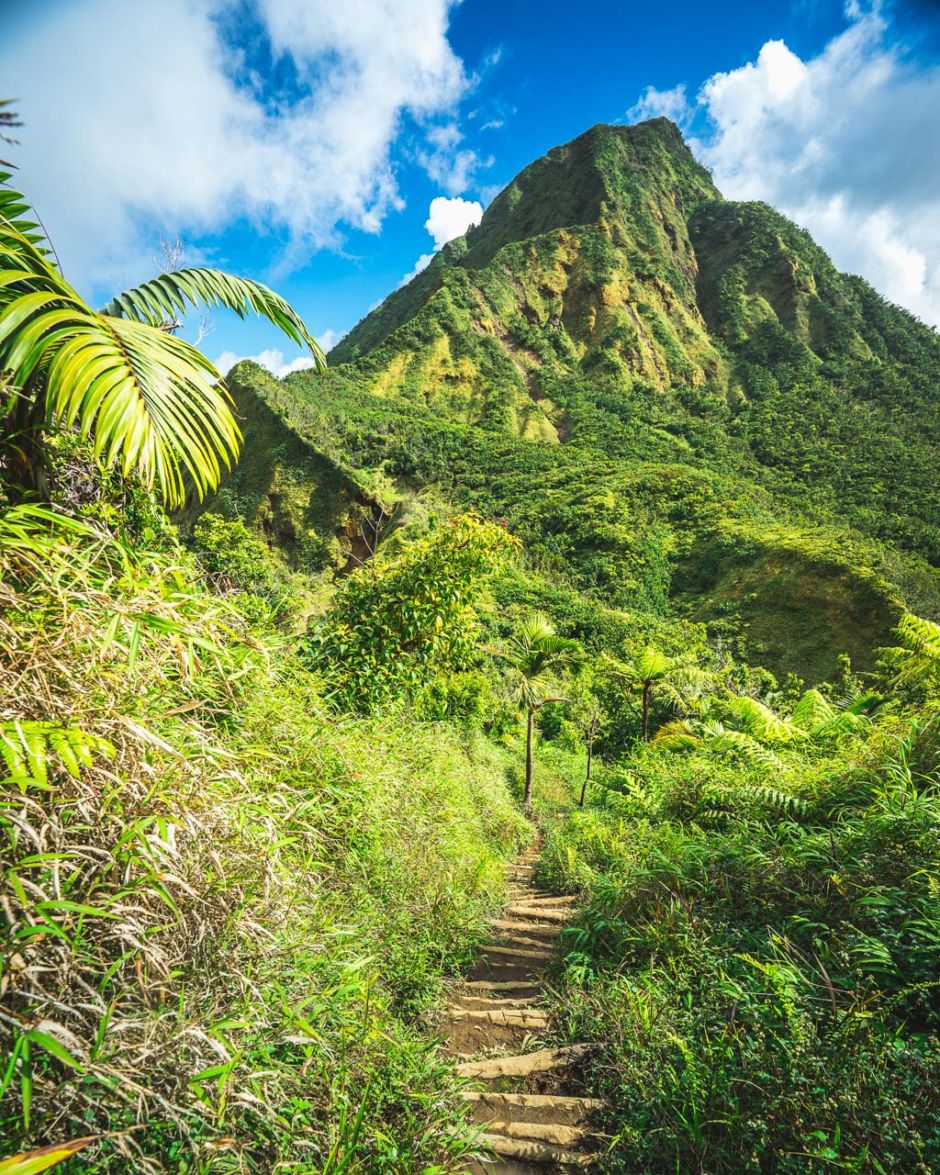 Nine! Morne Diablotins is breathtaking, as it’s the highest mountain on the island and the second highest in the Lesser Antilles. It’s a difficult-but-worth-it six-hour hike — you’ll be in the rainforest at its fullest, wandering between hundreds (thousands?) of different plant and animal species. The neighboring islands of Guadeloupe and Martinique can be seen from the top of this volcano, too — which, by the way, hasn’t erupted in a long while and is totally safe.

With so many volcanoes, many beaches in Dominica naturally have black sand. Mero Beach is a popular one (it’s more like a silvery gray, but still), with nearby restaurants all specializing in fresh dishes and knock-you-down rum punch. Others to hit: Purple Turtle, Rosalie Bay, and Number One Beach.

Off the sand, check out the nearby sulfur pools of small-town Wotten Waven. Bongo Baths, Ti Kwen Glo Cho, and Tia’s Hot Spa are ones to look for.

5. Dominica has the second-largest boiling lake in the world. 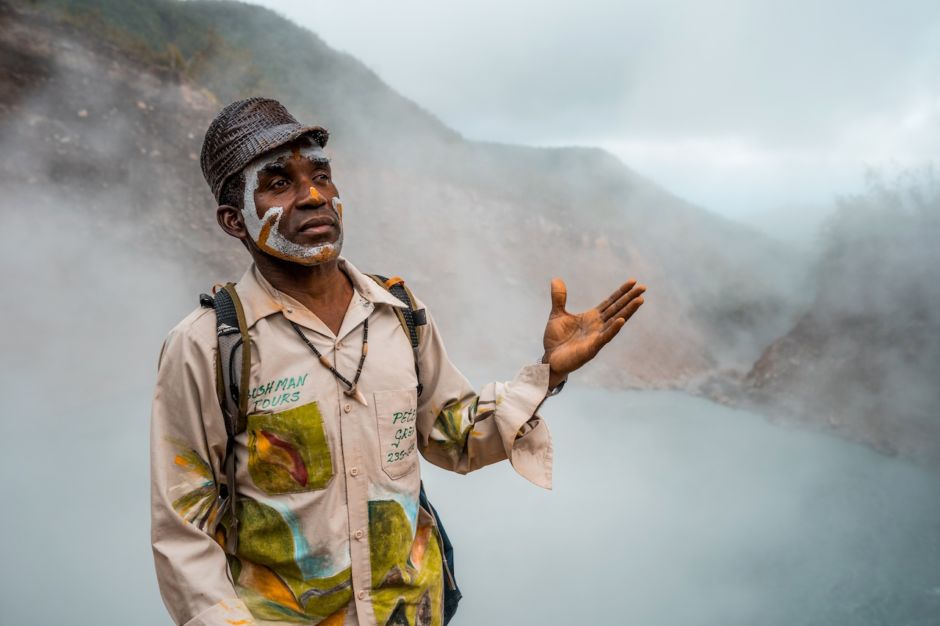 Boiling Lake is one the most famous places on the island. It was discovered in 1870, and it’s technically a flooded fumarole in a volcanic crater. The lake water takes on different colors depending on the local volcanic activity. The 5.5-mile round-trip trail to reach it leads you through the wickedly named Valley of Desolation and some truly wild vegetation. This is no easy stroll — you’ll need six hours to get there and back. Grab your walking boots and be ready to get dirty.

Dominica only has four amphibians — hard to believe with all this flora and fauna — and one of them is called crapaud (French for “toad”), giant ditch frog, or “mountain chicken.” It’s one of the largest in the world, is only found in Dominica and Montserrat, and it’s so iconic, it made it onto Dominica’s official seal. Also…it totally tastes like chicken.

Mountain chicken was once Dominica’s national dish, but a fungal infestation in the early 2000s drove a sharp decline in the island’s frog population. Nowadays, the species is protected as critically endangered and you won’t find it on any menu.

7. There’s a river for every day of the year. 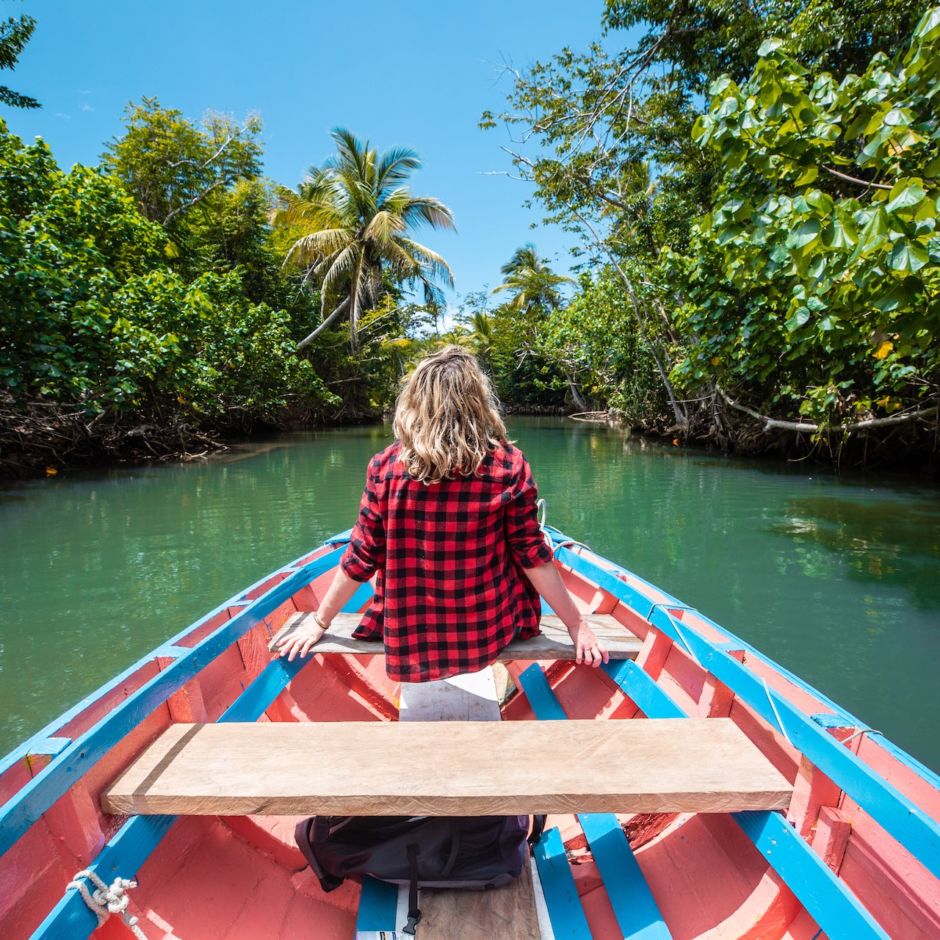 Apart from spectacular beaches and volcanoes, Dominica has an extraordinary number of rivers. Some are cool and clear blue; some are fast and cloudy; all of them are surrounded by exotic plants and flowers. The Indian River is the widest on the island, and many visitors choose this one for their first island boat ride. It’s basically a one-float parade through wildlife territory — odds are you’ll spot plenty of birds, iguanas, and crabs.

8. Pirates of the Caribbean: Dead Man’s Chest was filmed here.

Dominicans are proud to tell visitors that much of this film — and some scenes from the third film in the series, At World’s End — were shot on their island. The movie’s “Cannibal Island” is Dominica; the place where Will Turner and his shipmates are hanging in bone cages is Titou Gorge in Morne Trois Pitons National Park; the Indian River became the “Pantano River;” and several villages were settings for other scenes.

9. Your adrenaline levels don’t ever have to come down. 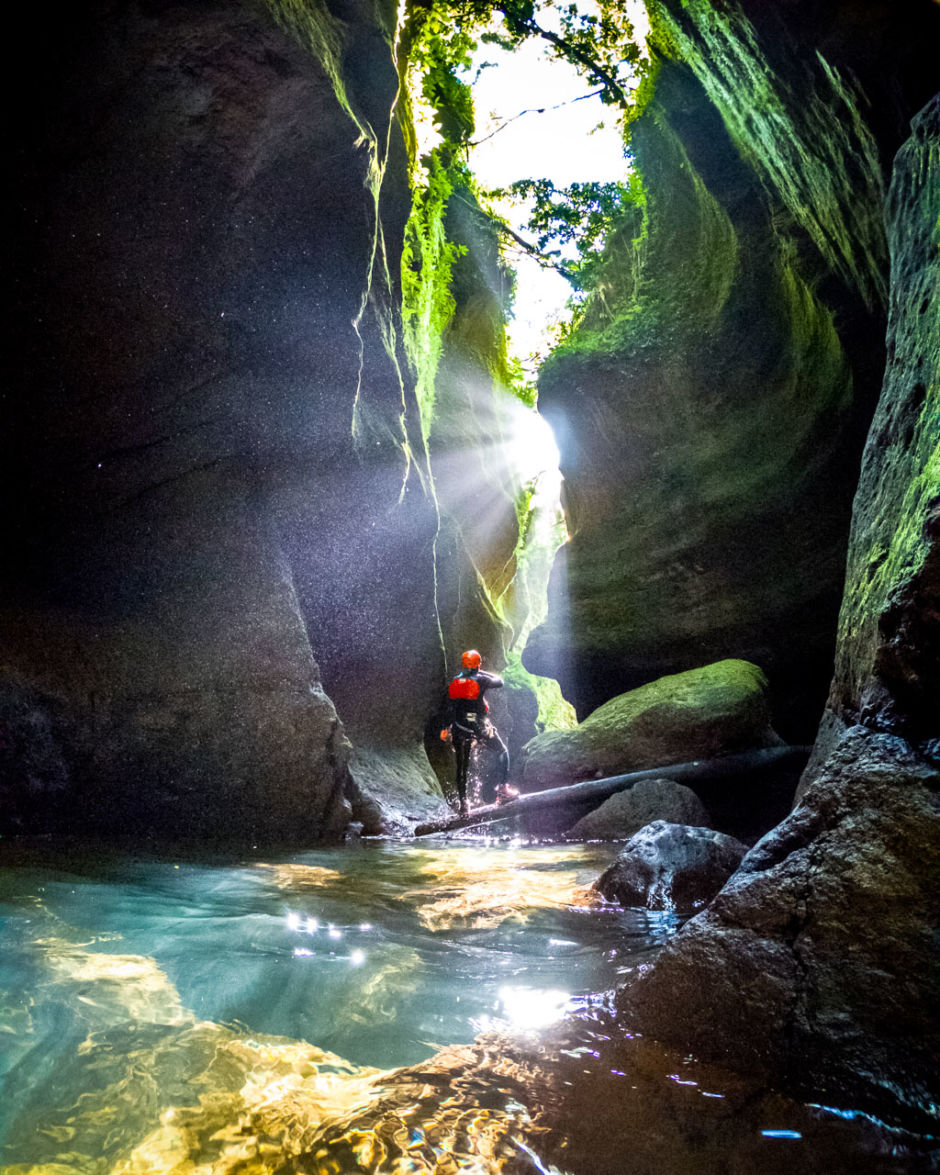 With so many rivers, mountains, and beaches in Dominica, you don’t have to search very hard to find an extreme adventure. Go river tubing or kayaking, following the Layou River to the sea; snorkel through warm bubbles at Champagne Beach; go canyoning through the rainforest to a secret waterfall; tackle the Waitukbuli National Trail, the longest in the Caribbean; scuba dive around Scotts Head Pinnacle; or swim all the way from the Caribbean to the Atlantic.

If you’re not a water person, stick to terra firma and go hiking, horseback riding in Portsmouth, birdwatching, or even turtle watching. You won’t run out of choices.

10. Dominica has been practicing herbal medicine for centuries.

The original inhabitants of the island, the Caribs, and later the Africans, brought an intense knowledge of plants and herbs. Luckily, much of that knowledge has been passed down generation after generation, and herbs like Moringa, dandelion, basil, and many others are still used today in what’s often called “bush medicine.”

Two ways to get in on the action? Visit the Dominica Botanic Gardens and scope out plants like periwinkle, known to the French as the “Violet of the Sorcerers.” Otherwise, just sit down to a traditional Dominican “bush tea,” and reap the benefits one sip at a time.

11. Whale watching is the island’s version of a spectator sport. 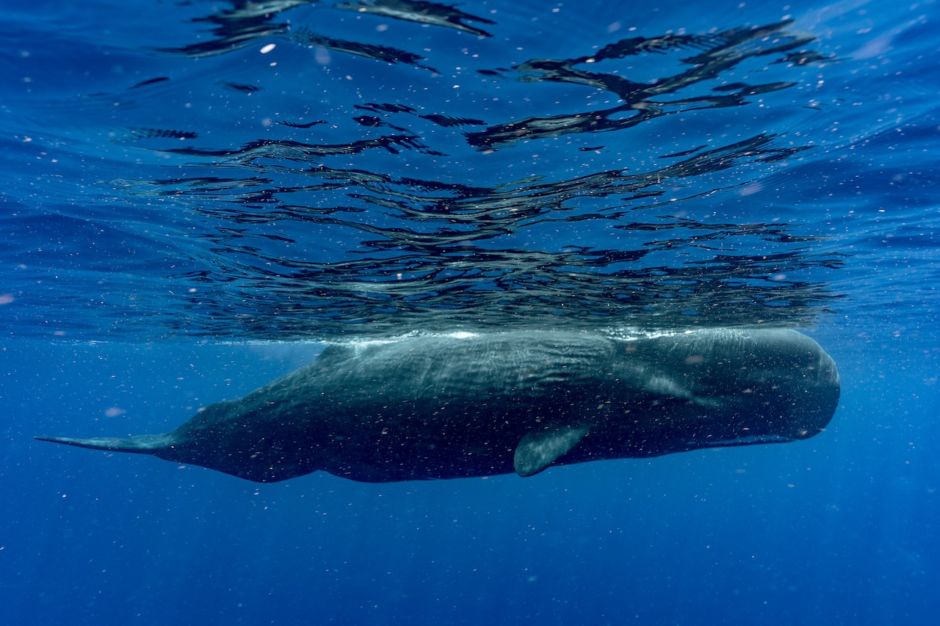 Sperm whales choose Dominica’s waters as their only year-round home, so on any tour you take — whenever, wherever — the likelihood of one putting on a show is pretty good. Both dolphins and whales live pretty close to shore no matter the weather, though the absolute best season is November through March.

Definitely go with a certified guide — they’re basically whale whisperers. This is a once-in-a-lifetime experience, and to reiterate: Dominica is the only country on the planet where sperm whales reside year-round. Now that’s a surprising fact! 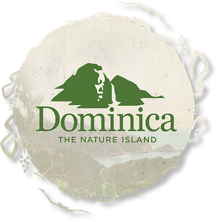 This post is proudly produced in partnership with Discover Dominica.
Tagged
Travel Dominica Dominica: The Nature Island
What did you think of this story?
Meh
Good
Awesome
✖
travelstoke
Download the mobile app
stoked by