CLOUDBERRIES, REINDEER HERDS, and countless lakes. Snowmobile rides chasing the midnight sun, traditionally cooked food made with birch or lingonberries, and Europe’s only indigenous people. Arctic Europe has it all. Life up here will definitely surprise you, and here are 11 facts that prove it. 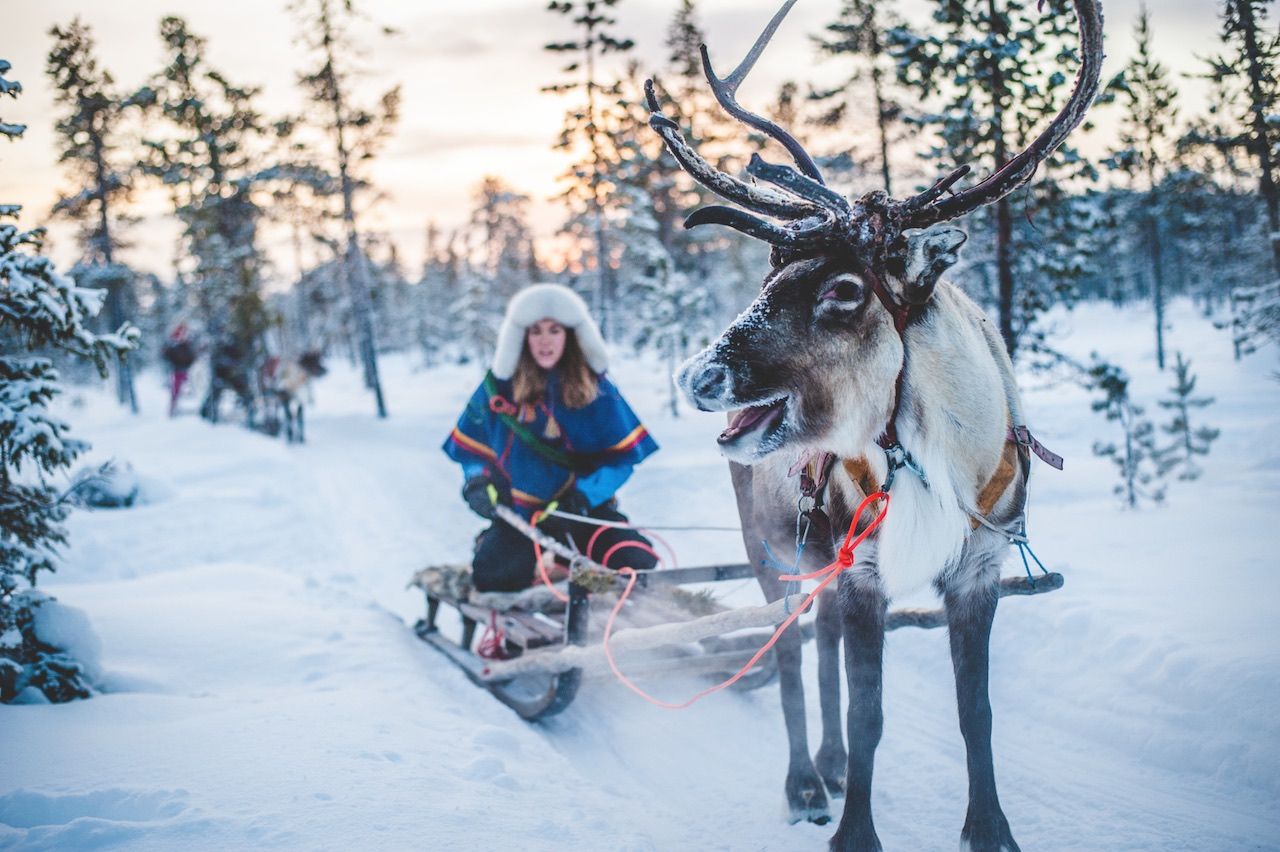 For the Sámi people, the northern sections of Finland, Norway, and Sweden are borderless. Instead, it’s all part of Sápmi, the land of the Sámi. Europe’s only indigenous people have roamed this region for more than 10,000 years, and local governments across all three countries respect their claim to the territory.

Reindeer herding is still central to the culture here, and when you hike through Urho Kekkonen National Park, sip water from a stream in Muddus National Park, or just drive along the E75 on your way to Pyhä-Luosto National Park, you might spot one of the semi-domesticated animals. It might be your first hint that you’ve entered a different world…

2. The year is divided into eight seasons here. 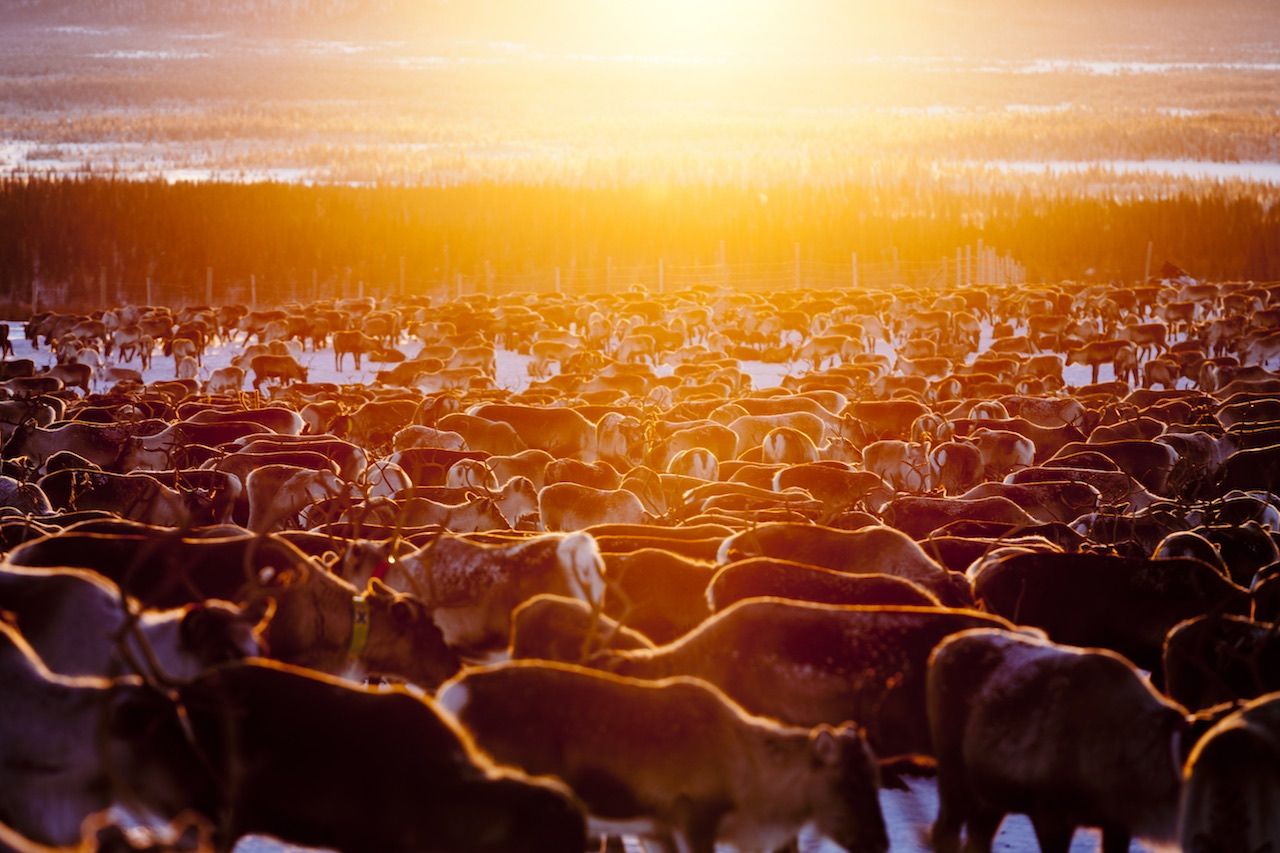 The Sámi people divide the year into eight seasons, based on their close ties to the reindeer. With a climate that has extremes in both winter (the sun never fully rises) and summer (it never gets totally dark), there’s also a range of seasons in between. The full list: spring-winter, spring, pre-summer, summer, pre-fall, fall, pre-winter, and winter.

In spring-winter, the Sámi herdsmen bring the reindeer out of the forests and coastal areas to calving grounds in the mountains. In spring, when the snow starts to melt, the calves are born, and later in pre-summer the reindeer graze in the birch groves and swampland while the north enjoys 24-hour daylight. When summer arrives, the Sámi families gather to mark the newborn calves. In pre-fall, the reindeer build up their fat and muscles for the winter, and fall is the start of rutting (breeding season). In pre-winter, the Sámi prepare for the move from the mountains to the lowland bogs — and then arrives winter, the longest of the eight seasons…and arguably the most fun.

Non-locals can get in on the action at Salla Reindeer Park in Finland (plenty of hot coffee, expert guides, and a chance to personally feed a reindeer) — though you’ll spot the big guys all across Arctic Europe. 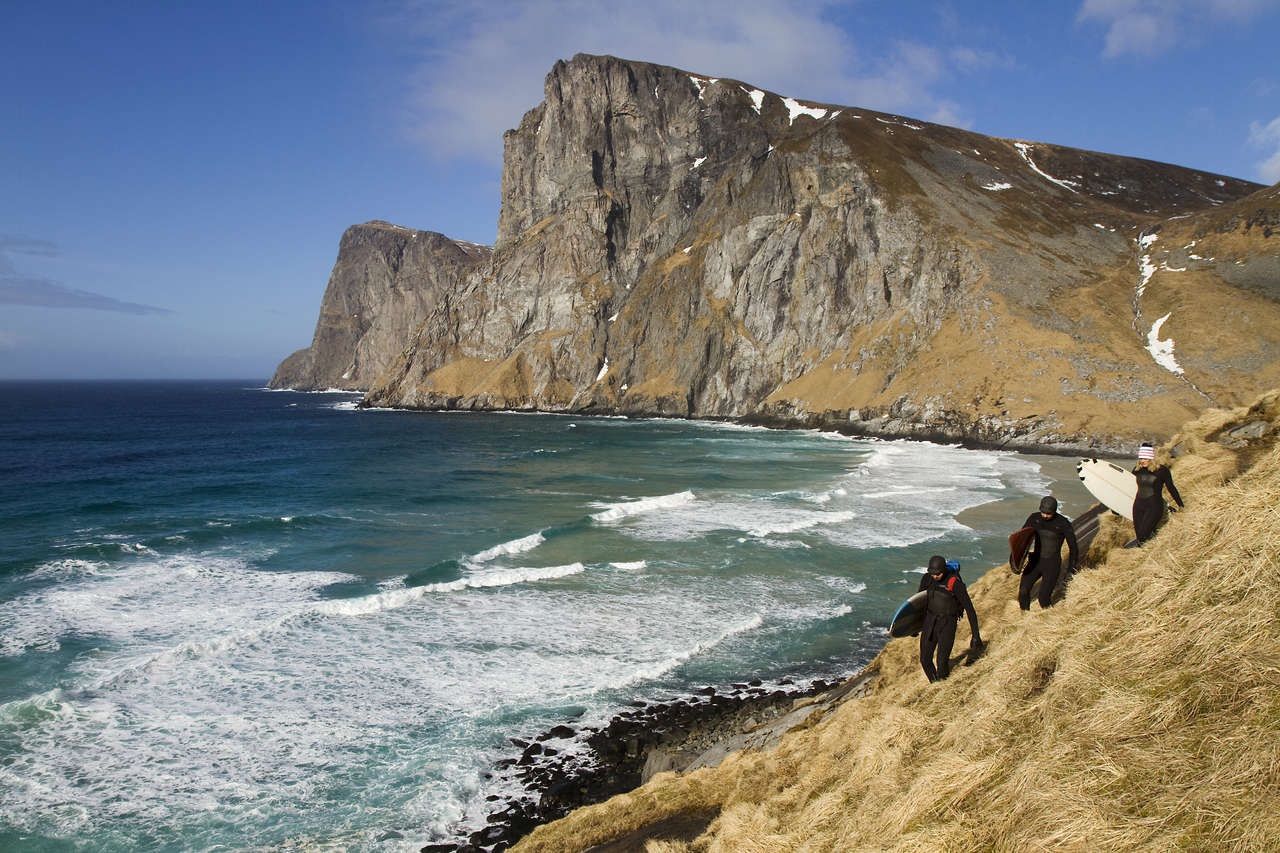 Okay, not everyone, but there are some avid surfers up here for whom weekends mean sleeping in vans, watching green ribbons light up the night sky, and walking through new-fallen snow in the morning to surf. You’d think they would’ve settled in Hawaii or Australia — where the water temperature is closer to 80℉ than 40℉ — but the snow and surf combo has its charms.

Some of the most popular surf spots are Unstad and Flakstad (in the Lofoten Archipelago) and Andøya (in the Vesterålen Archipelago). Also, thanks to the Gulf Stream, it’s not as cold around Lofoten as you might think, given the 68 degrees of latitude (similar to that of Alaska and Greenland).

4. Summer’s all about cabin life… 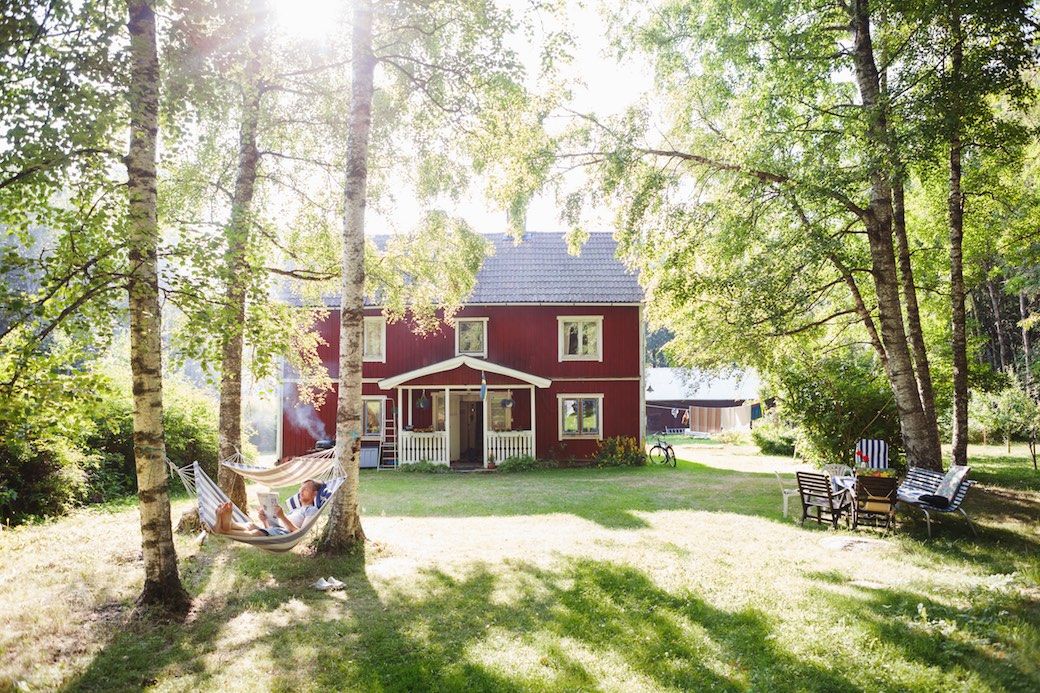 Summer in Arctic Europe means jetting off to the family cabin or cottage, and it’s definitely not just something for the ultra-wealthy — most are modest little getaways that focus on relaxation, being in nature, slowing down, and nostalgia. Ever wonder why these are some of the happiest places on Earth?

If you really want to vacation like a local, find a cabin to rent in the countryside (Norway, Sweden, and Finland all have some variant of stuga or hytte), and hunker down. 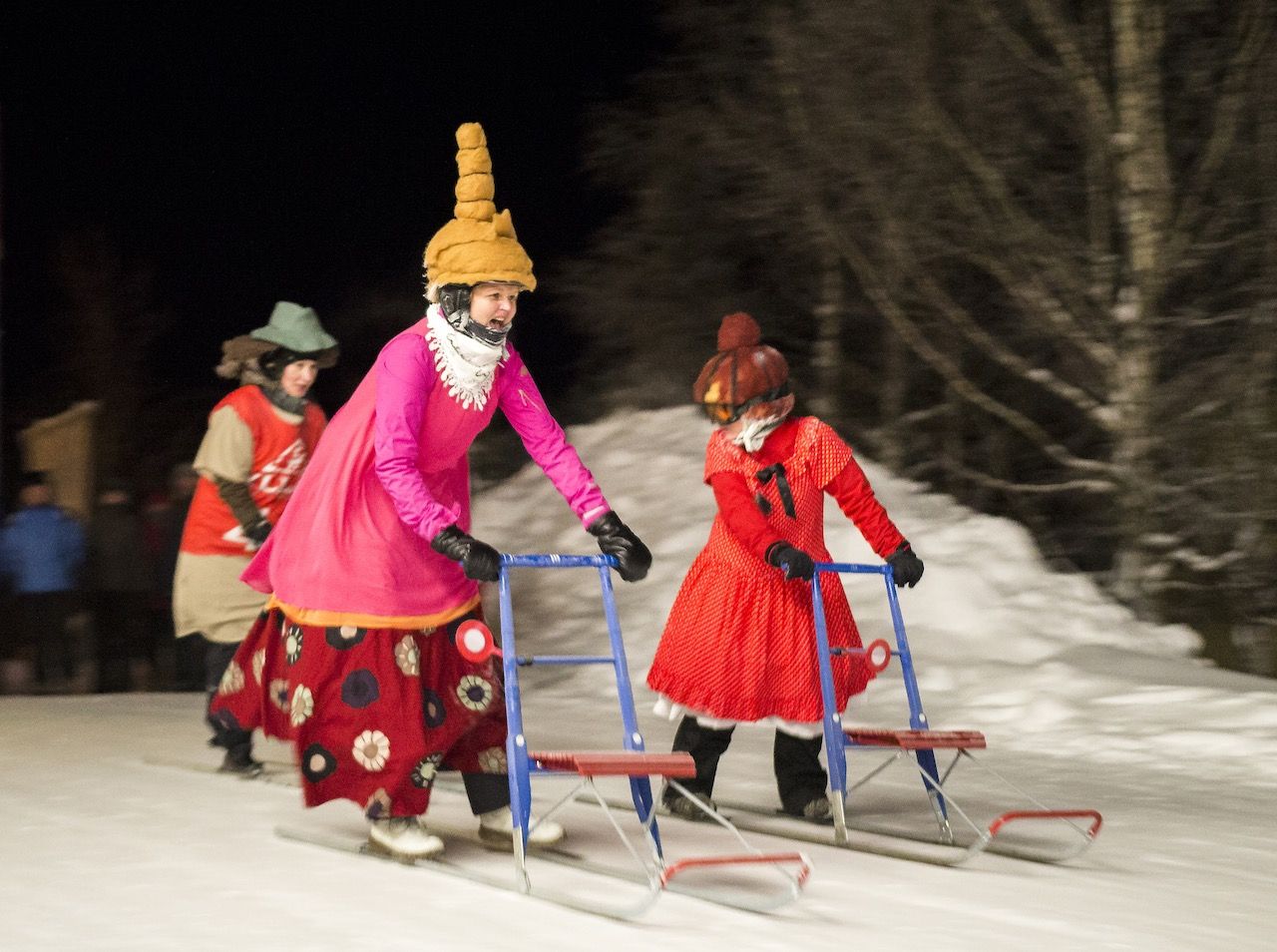 In the winter, don’t be surprised to see a kick sled (basically a chair mounted on a pair of metal runners) parked outside local grocery stores. When the streets are covered in snow and there’s ice on the lakes and bays, people use kicks sleds to head to the store to pick up some milk — or for a leisurely day out. Every year in Luleå, there’s an ice track on Stadsfjärden where you can have a go — wear a pair of warm boots and wool mittens, and kick your way forward. You’ll be a pro in no time.

6. You’re a natural born nature lover when you live here. 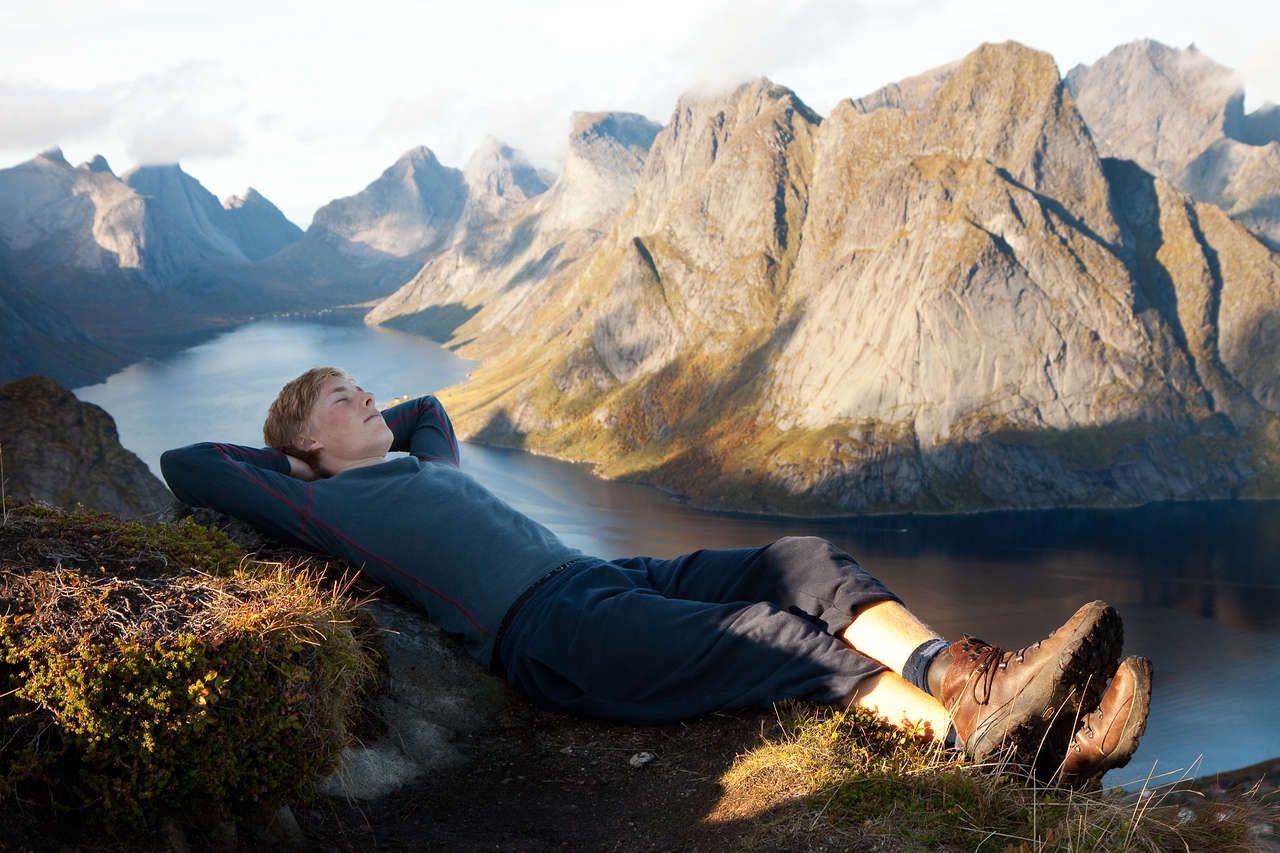 Having fjords, mountains, forests, lakes, and rivers right on your doorstep makes for a powerful connection to nature. Add the fact that there are very few people to dampen the aesthetic, and the effect is only increased.

In Sweden’s Arjeplog Municipality, for example, there’s an average 0.5 people per square mile. Which means you have almost 9,000 lakes and nearly 2,000 miles of rivers and streams practically to yourself to spend a few soulful hours kayaking, hiking, or fishing for pike, char, and whitefish. In Inari Municipality, Finland, there’s an average of around one person per square mile, so plan to spend your weekends in the Muotkatunturi Wilderness Area ice fishing with no one else around. In Norway, the concept of going ut på tur (out for a wander) every weekend is as common as having milk and cookies.

7. Jokkmokk is surely the northernmost cultural capital in the world. 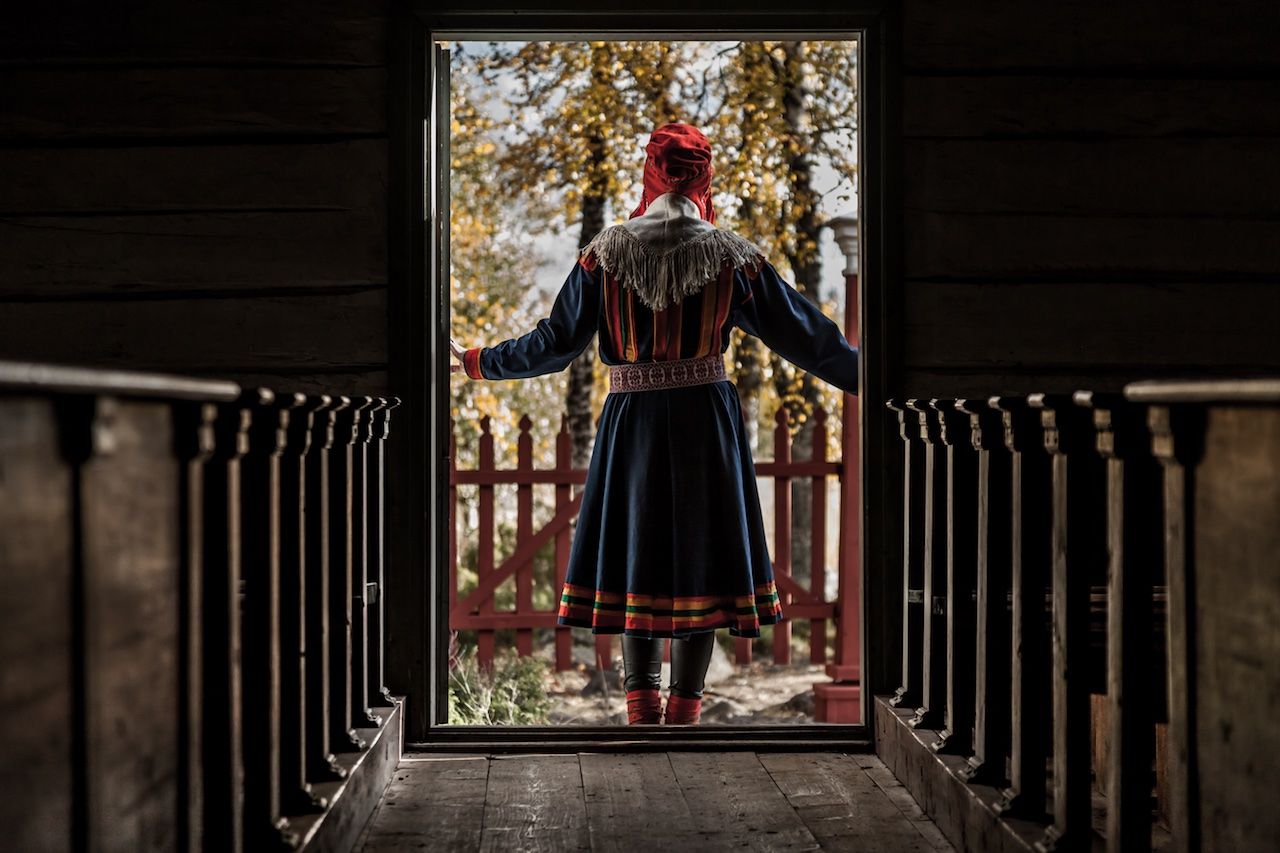 Jokkmokk — also known as Dálvvadis (meaning “river’s curve”) to the Sámi people — is one of the best spots to shop for handicrafts in Lapland and the only place in Sweden that has a college teaching reindeer husbandry and craftmaking in the Sámi language. Between learning and shopping, you can pop by Viddernas Hus, a café where proprietors Greta and Linn use handpicked herbs from the surrounding gardens to prepare salads and pastries. Try the bread made with bark flower or the honey flavored with crowberries.

And every year without fail, on the first Thursday in February, Jokkmokk’s winter market takes place. Sámi people have been gathering at this market for over 400 years. Check out the market’s 150+ stalls, where vendors sell everything from yellow, red, blue, and grey Sámi shoes to dried and smoked reindeer sausage, cloudberry jam, and lingonberry syrup. Feel the hair from reindeer hides against your hands, admire the beautifully engraved Sámi knives, and smell the smoked reindeer kebabs from Suovaskungen.

8. People are mildly obsessed with their snow scooters. 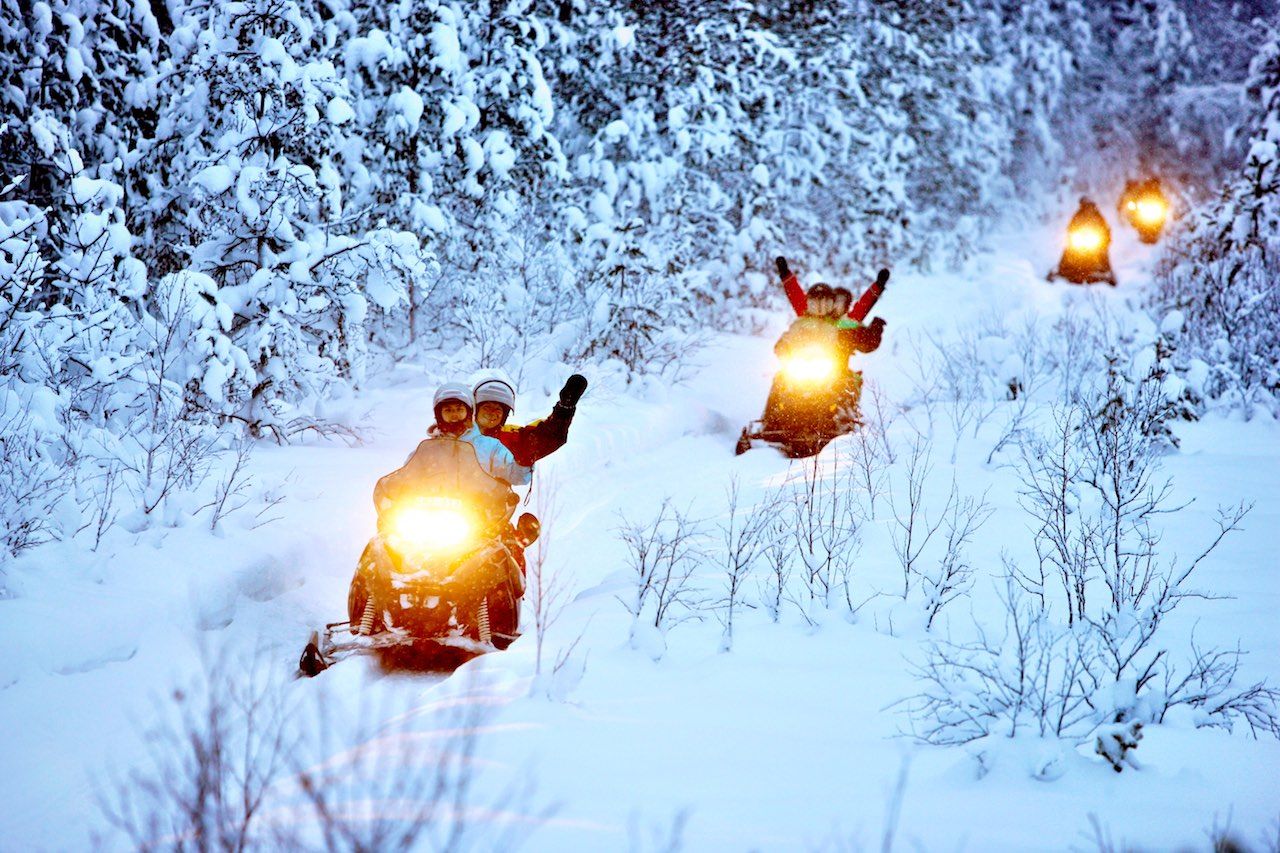 Head to Arctic Europe, and you’ll find a snow scooter (that’s a snowmobile or snow machine to North Americans) parked outside almost every house. When the snow arrives in November and you have white powder up to your knees, a Volvo V70 just doesn’t make the cut.

In Kiruna alone, the northernmost city in Sweden, there are 8,000 registered scooters and nearly 1,000 miles of marked trails. (Word to the wise: Be wary of these tracks during summer, as they’re most likely much wetter than your normal hiking trail.) In Finland, around Inari and Saariselkä alone, there are more than 1,000 snow scooter routes. To get in on the action, head to Rovaniemi and chase the Arctic light on a snow scooter with Lapland Safaris. Visitors can be part of the snow scooter scene quite easily up here, and beginners are welcome to join in, too.

9. There’s gold in the forest.

In Arctic Europe, there’s an abundance of forest treasures. Porcini mushrooms, yellow chanterelles, and velvet bolete dot the ground in the fall, and plump blueberries and golden cloudberries burst on bushes in the summer. Bring as many buckets as you can carry and head outdoors — that’s all there is to it. Foraging is such an essential part of the Arctic European culture that even on a wildlife tour in Sarek National Park, the tour guides insist on making time for berry picking — in between looking for moose, bears, and eagles.

In Norway, Finland, and Sweden, nature is for everyone to enjoy. The “right to roam” is a big thing here. Known as allemansrätten in Swedish, allemannsretten in Norwegian, and jokamiehenoikeus in Finnish, it means you can walk and camp (and forage) almost anywhere. Most mushroom and berry pickers keep their favorite spots a secret, so bring your inner gatherer and go out and exercise your roaming privileges. Just make sure to check local rules regarding cloudberries in Northern Norway beforehand; in Finnmark, for example, you need to ask the sheriff for permission if you want to take home some of the highland gold.

10. Everyone here knows how to dress. 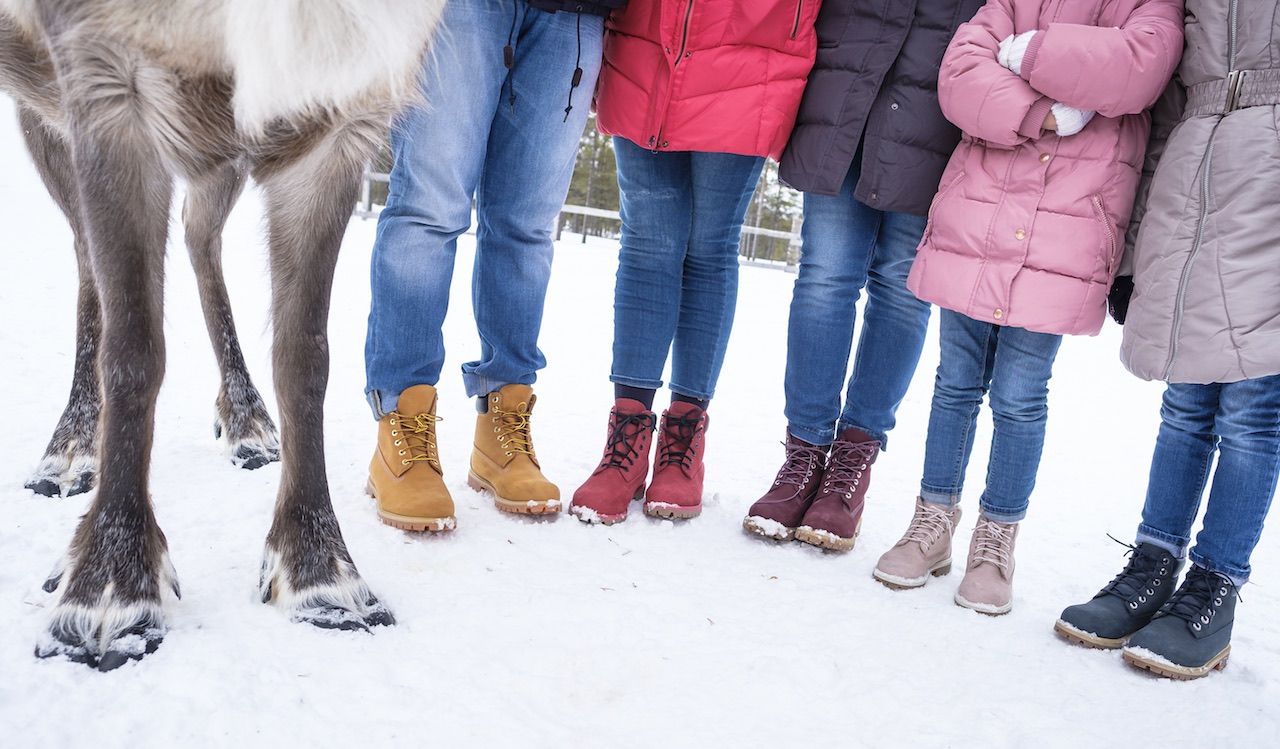 Forget about Scandinavian minimalism, and leave the heels, leather loafers, and silk tops at home — they won’t get you very far around the Arctic Circle. To dress to impress around here, it’s all about weatherproof gear (which means clothing that can take snow, subzero temperatures, wind in the winter, and rain in the summer).

Don’t go overboard, though; you don’t need all of those anti-mosquito-stretch-convertible pants and the super-light softshell jackets out here. Up north, things are more straightforward — go for natural fabrics, plenty of layers, and invest in robust and waterproof boots, a pair of thick gloves, and a wool hat. For an awesome souvenir, pick up some traditional boots made of reindeer leather from Carl Wennberg in Kiruna, and stick to Fjällräven, Peak Performance, Halti, and Norröna brands for quality, heavy-duty Nordic active wear.

11. Meeting up for coffee is practically an official pasttime. 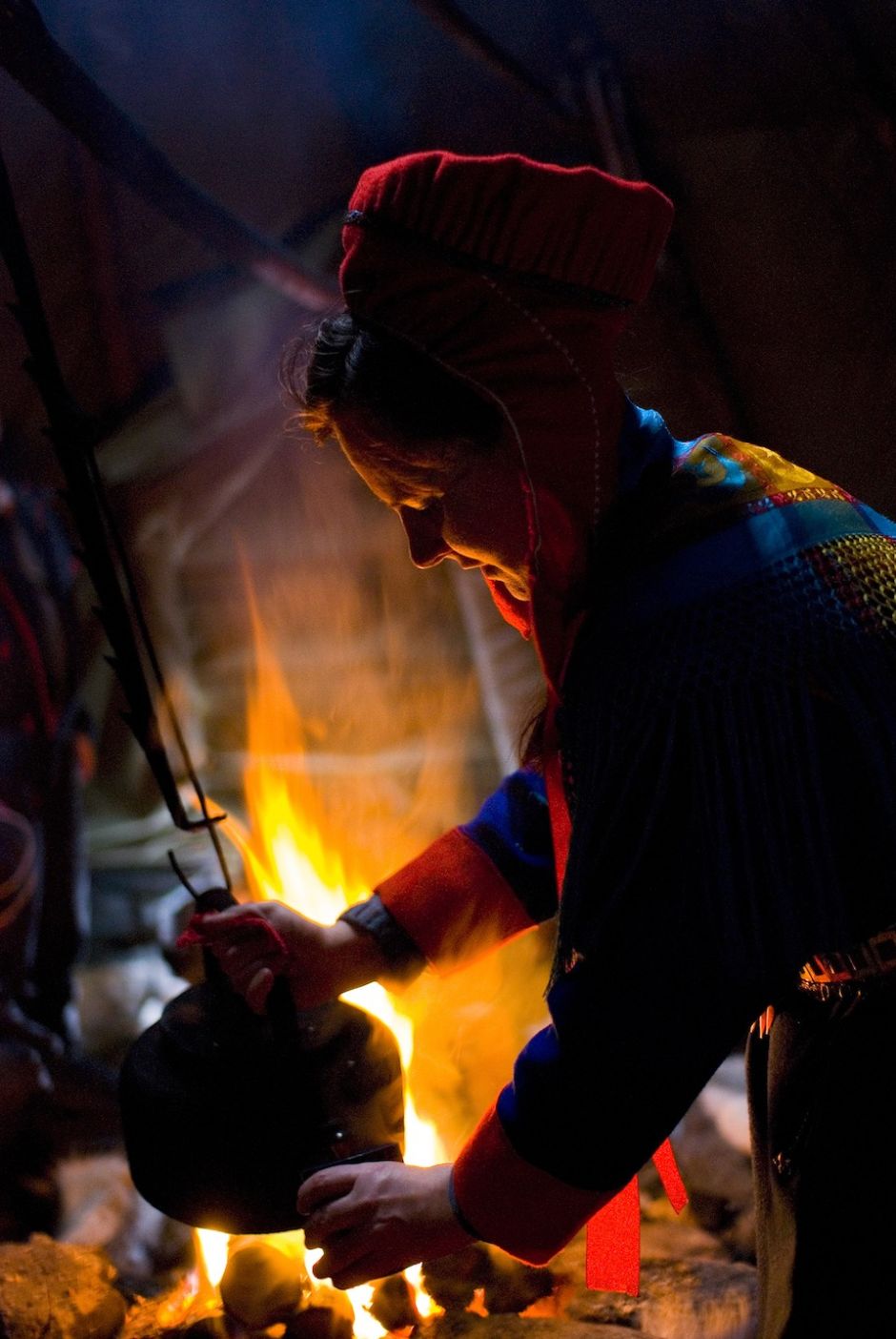 In Arctic Europe, there’s always time for a cup of coffee together with friends, family, colleagues…or someone you just met. Swedes even have their own word for the practice: fika. In Norway, there’s so much time allotted to the tradition that the average Norwegian drinks seven kilos (that’s 247oz) of coffee a year, compared to an American’s three kilos (105oz).

Wherever you visit, you can expect to be served coffee in someone’s home with homemade cinnamon rolls, have it professionally prepared by a barista in a café, or sip it outdoors gazing over the landscape. In Arctic Europe, the views are always spectacular, and trust us — a cup of coffee never tasted better.

This post is proudly produced in partnership with with Finnish Lapland, Northern Norway, and Swedish Lapland.
Tagged
Culture Trip Planning Finland Norway Sweden
What did you think of this story?
Meh
Good
Awesome