ANYONE WHO’S BEEN to New Mexico can tell you there’s no place like it on Earth, but they probably won’t be able to tell you exactly why. I could explain how we have deserts like Arizona, mountains like Colorado, and those neon southwestern sunsets — but New Mexican landscapes and cultures have a feel that just can’t be described or photographed. It’s one of those things you have to experience firsthand.

People who’ve been to New Mexico just get it. That’s why we lovingly refer to it as the “Land of Entrapment” — there’s something that stays with you and, before long, you’ll be wanting to stay yourself.

1. A fiesta can be made out of anything, anytime, anywhere. 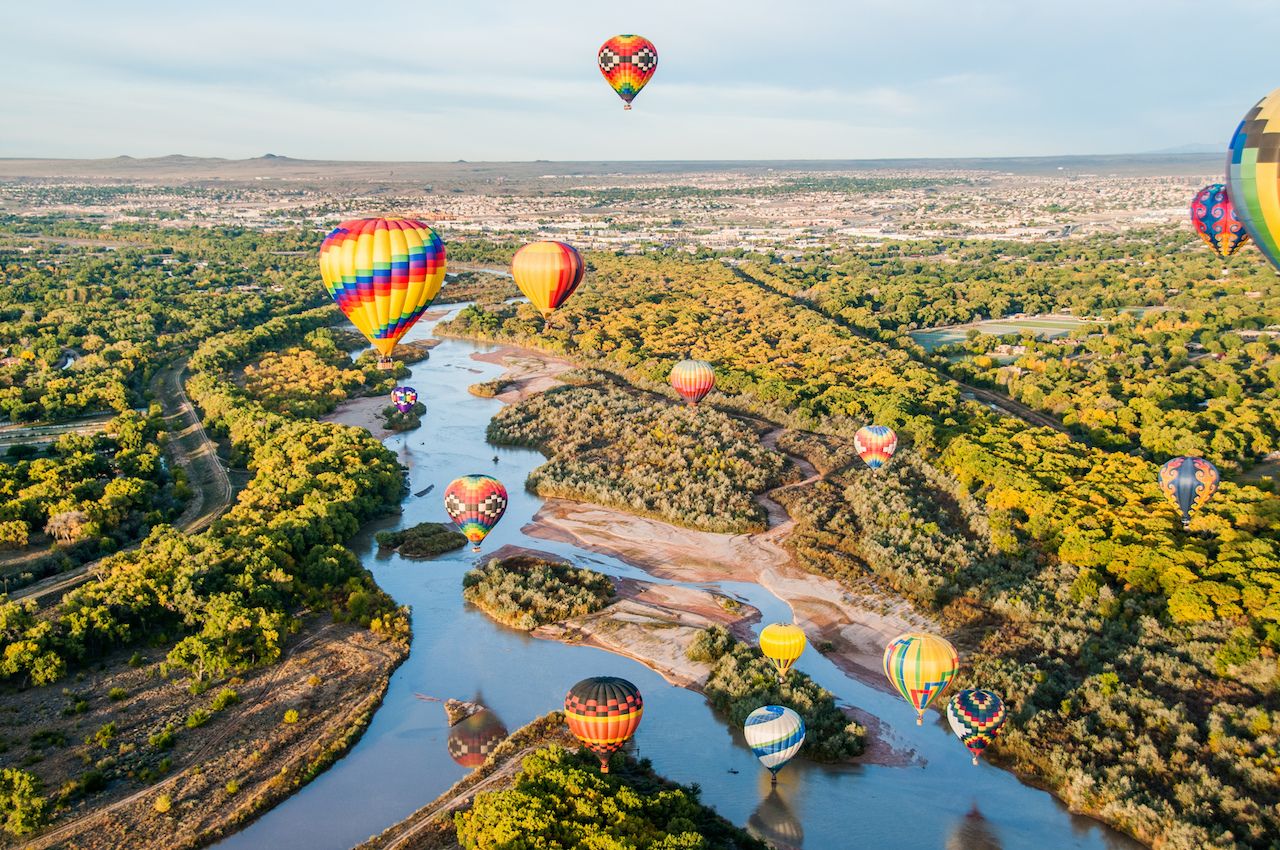 Albuquerque’s International Balloon Fiesta looks great on Instagram, but it starts way earlier than you think. Behold the practice runs — during the week leading up to the event, if you’re driving I-40 or I-25 into town, you might just get front-row seats to a technicolor show of hot air balloons during these “rehearsals.” Feel free to take the next exit, roll down your windows, and create your own balloon-viewing party. You won’t be alone.

But the fiesta doesn’t end there. Along with world-class festivals like Wine & Chile and historic community events like the burning of Zozobra, anyone who’s been to New Mexico knows there’s always a party to be had somewhere. Usually, it’s on a mountainside plateau covered in sage…just follow the trail of dream catchers in the trees as you ascend a maze of dirt roads, and you’ll know you’re on the right path.

2. The question is never, “Is there live music tonight?”

While world-class DJs like to spin unannounced at our desert camp-outs, we also have more than our fair share of live music at more traditional venues. Descending into Albuquerque’s gritty grunge scene or chasing that Mariachi trio to serenade you during dinner are always options. New Mexicans know the question isn’t whether there’s live music, but rather, what kind of music do you want to hear?

For some signature Albuquerque garage punk, head to Sister. For the bigger headliners, check out Sunshine Theater. Then there’s the chiller vibes at Taos Inn, with their wood-burning hearth and balcony overlooking the bar. In a similar vein, Mineshaft Tavern — in the little town of Madrid — often hosts traveling folk singers (along with the Crawdaddy Blues Fest annually). Then in Santa Fe, wine bars and breweries play home to fiddlers and acoustic guitarists, while the local saloon keeps a full calendar with everything from reggae to Leonard Skynyrd cover bands.

Outside of scheduled performances, there are often buskers near the plazas at the center of New Mexican towns when the weather is gorgeous (and sometimes when it’s not). Some of my friends in the business tell me they’ve made more money on the streets of Santa Fe than in larger, supposedly artist-friendly cities like LA or NYC. If you’re traveling through and have the good fortune to be serenaded, do as the locals do — chip in a few bucks. 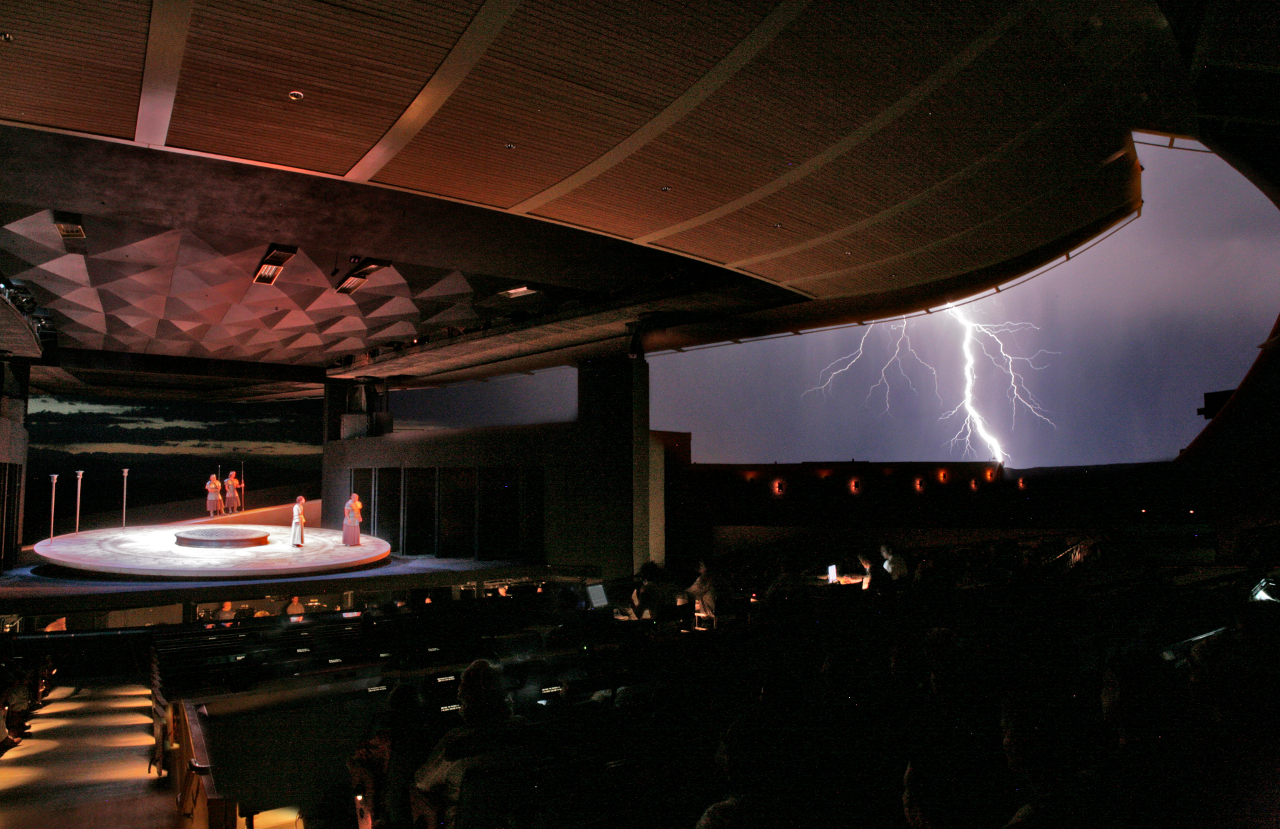 If you enlist a local waiter in Santa Fe to point you in the direction of the hotspots, don’t be surprised if you hear mention of our internationally renowned opera house. We’re not trying to be pretentious — it’s just hard to believe someone doesn’t already know about our open-air opera. It’s a once-in-a-lifetime experience to watch the sun set over the mountains as the backdrop for the drama — at least the first time, it is.

For the cheap seats that students and ski bums love, check out apprentice nights and dress rehearsals. There’s also often standing room available for the world premieres of new operas, like this summer’s The (R)evolution of Steve Jobs, and the super accessible volunteer program lets you enjoy free shows all summer long if you’re going to stick around for a while. 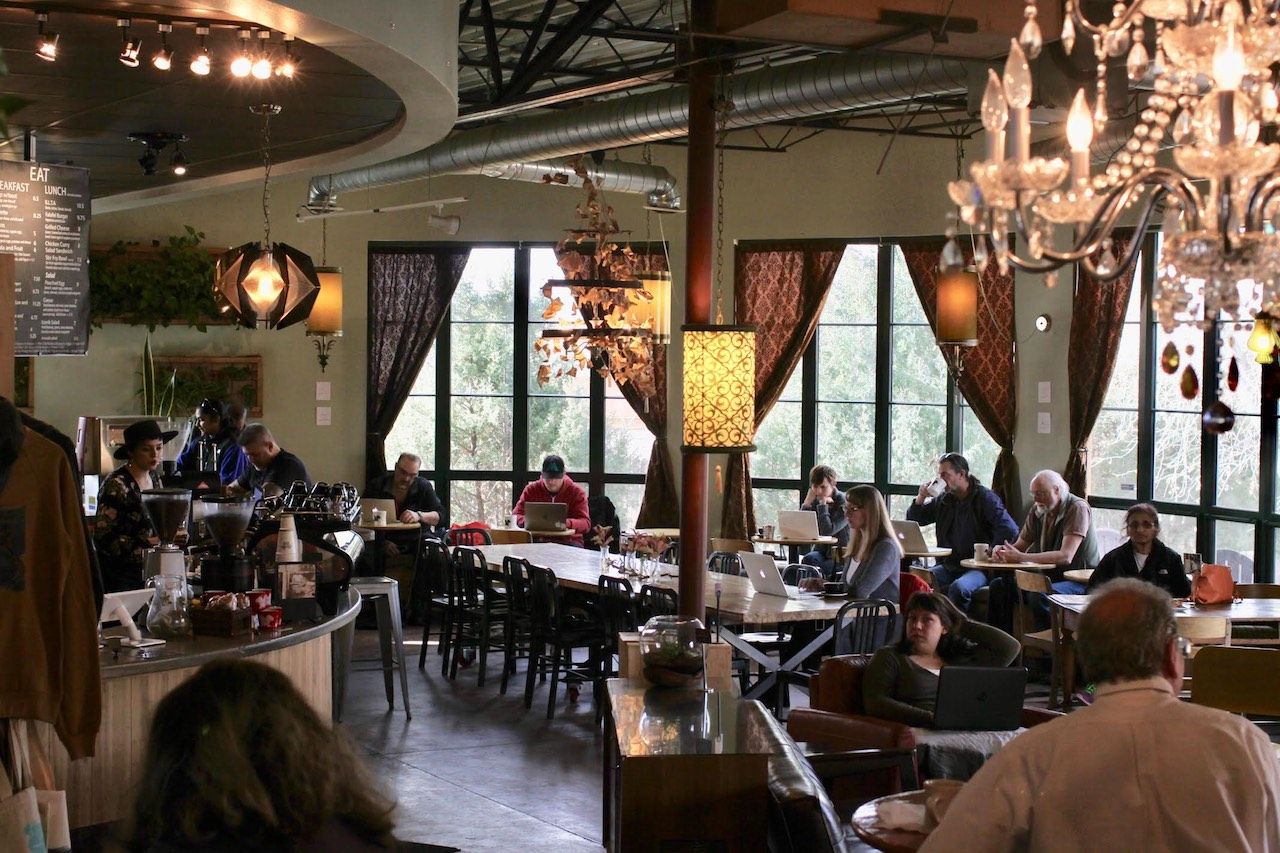 New Mexico isn’t only where Westerns are filmed — it’s also still running strong on that can-do cowboy attitude. As the Wild West IRL, we’ve got a long-standing practice of do-it-yourselfing, from fixing that rusty hinge to building passive solar cabins and making our own gourmet chocolates.

This mentality is reflected most strongly in our foodie scene. Iconik Coffee Roasters in Santa Fe proves we’ve come quite a long way since cowboy coffee in a tin. Offering coffee education and a wide array of loose leaf teas, this roaster and coffeeshop does it all in-house. Sage Bakehouse, meanwhile, provides the best bread anywhere in town — because it’s the freshest. Everyone should experience an Avocado Smash and Serrano Ham tartine here.

5. Booze should be taken seriously (and often straight, because it’s delicious).

Recognizing another DIY opportunity, microbreweries have flourished in New Mexico, gaining national awards and attention. Marble Brewery, based in Albuquerque, offers seasonal beers and a no-frills vibe, while Duel in Santa Fe serves up their Belgian-style concoctions and food — pretzels included. Also in the notable brewers club are La Cumbre, Boxing Bear, and Bosque Brewing. If you’re more of a wine drinker, there are many vineyards to visit throughout the state and plenty of tasting rooms along the way.

For stronger spirits, New Mexicans — again — don’t shy away from the challenge. KGB Spirits crafts a well-balanced gin and a smooth whiskey, among other things, while Santa Fe Spirits has taken home numerous awards for their scotch-style whiskey, gin, vodka, and apple brandy. If you can’t visit the distilleries themselves, local restaurants can be counted on to carry these New Mexican spirits, and you may even be able to find a bottle in your liquor store back home. 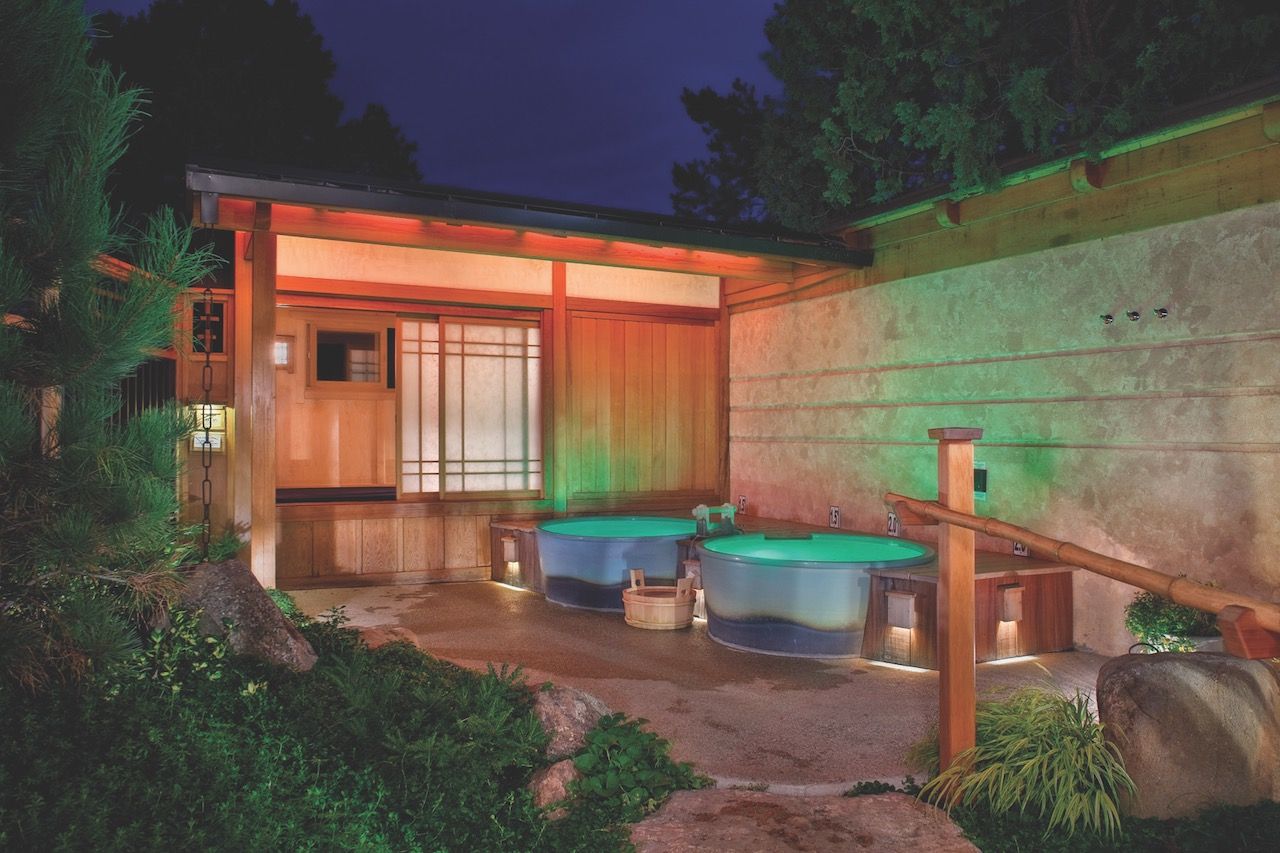 With so many free spirits falling in love with the place, northern New Mexico has embraced all things new-age and downright weird. This includes our outdoor farmers’ and artists’ markets (where you can put that “buy local” mantra into action) and our alternative medicine practices that have made the state a destination for healing.

The timid can start slow with a cold kombucha on tap, while the more adventuresome can dive right in with a micronutrient-packed elixir and color therapy treatment at Santa Fe’s Love Yourself Cafe. New Mexico also draws holistic medical practitioners from all over the world to study acupuncture and massage, as well as spa aficionados who’ve been let in on the secret of the healing powers at work at Ten Thousand Waves.

7. The aspens turn, and it’s not right or left.

New Mexico in the fall means a mandatory detour into Hyde Memorial State Park, just outside of (read: above) Santa Fe. In the fall, the aspen trees turn bright yellow, and while the weather is still a balmy 60 degrees in town, the mountains are already snow-capped. A half-hour drive will have you throwing snowballs, or spend the night camping in the well-maintained park during the summer months. But whatever you do, if you’re in New Mexico in the fall — don’t miss it.

Camping in New Mexico doesn’t need to be a once-a-year, hyper-organized event. With so many state and national parks to cross of our lists, we get out of town every chance we get. Sometimes it’s kayaking outside of Rio Rancho, sometimes it’s whitewater rafting the Taos Box, and sometimes it’s mountain biking the nearest peak. Any way you cut it, just load up the tent and you’re already on your way.

9. The White Sands really are that white. 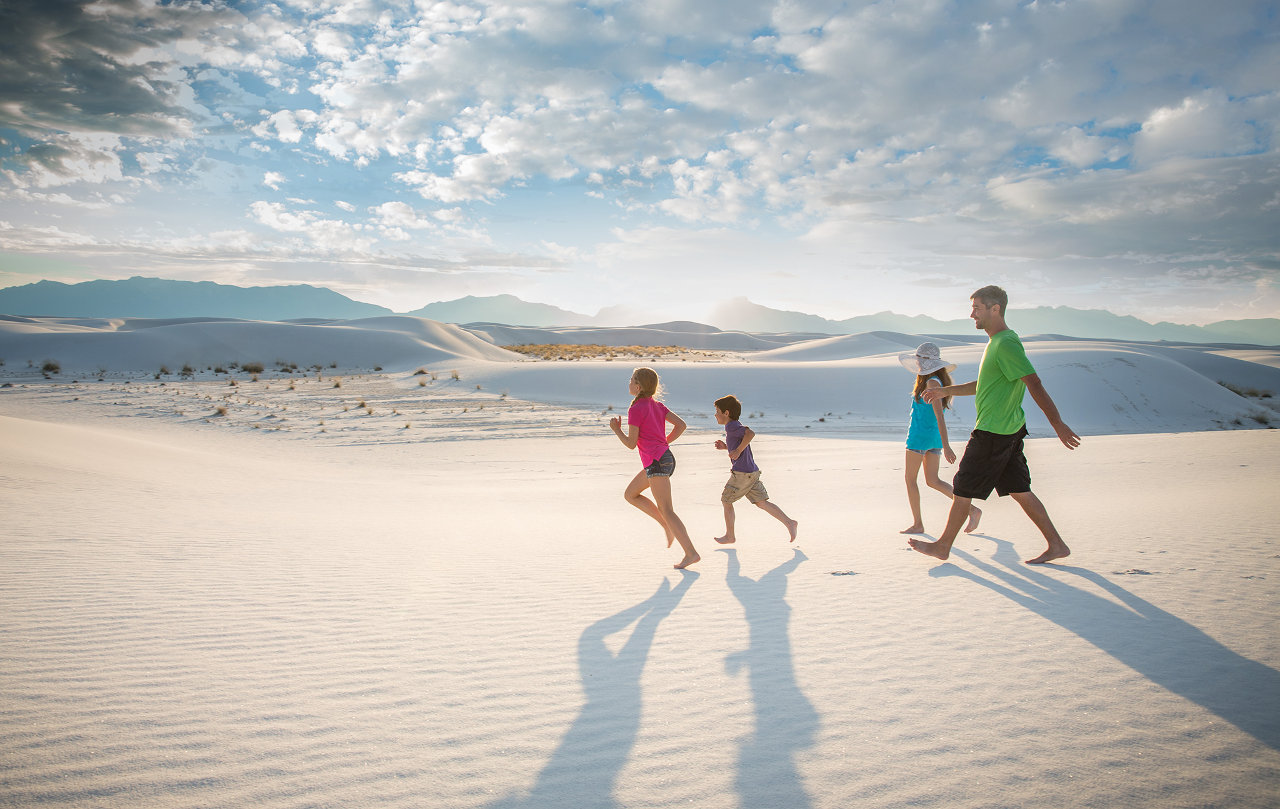 Another dog- and kid-friendly adventure is the rolling expanse of colorless dunes stretching through central-southern New Mexico. White Sands National Monument is a natural wonder that has to be seen in its full, awe-inspiring expansiveness to truly get what all the fuss is about. Pack a picnic and head out for some Kafka-esque snapshots. And yep, you can camp, hike, or bike through the park, or just hop on Dunes Drive and stop for whatever photo or sand-sledding opps spark your fancy.

If you really want to get out of town, New Mexico is perfectly positioned for some of the most quintessentially American road trips out there. We’re road tripping distance from hubs like Denver, Phoenix, and Austin, and we also hold a patch of that unparalleled expanse of road: Route 66.

Old Route 66 starts on the California coast and heads all the way to Chicago, hitting Gallup, Albuquerque, and the small town of Tucumcari along the way. If you’re going to pick just one section, though, do it in New Mexico — there’s always a lot to see in the little towns between the bigger cities, and they’re the ones most clearly exhibiting Route 66’s past. Check out Sands Motel in Moriarty, Bowlin’s Old Crater Trading Post in Bluewater, and the Park Lake Historic District in Santa Rosa, among others.

Yeah, alright, we know what the flowers look like…but did you know this feminist painter also had a career as a nude model, hitched rides on motorcycles through the desert, and took up pottery after she lost her eyesight? Georgia O’Keeffe, like so many other artists, was profoundly affected by the landscape of New Mexico — and her museum (and former home) is a thoughtfully curated testament to her life and legacy in relation to the land. You’ll find it in Sante Fe, a few blocks from the city’s main plaza.

12. No, you’re not hearing a Canadian accent.

Contrary to popular misconception, it’s not a Canadian accent you’re hearing when you listen to someone from New Mexico. Even though every other sentence ends in that characteristic “eh?”, that’s just the dulcet tones of the New Mexican way of speaking. You know you’re chatting with locals when you hear a heavy peppering of “eh? eh?” at the end of everyone’s sentences. Other local idioms include:

And as this is one of a handful of bilingual states in the US, you’re likely to hear Spanish and English intermixed at any given time — and the colloquialisms that arise are perfectly New Mexican.

If you thought sopapillas were just crispy vessels for ice cream, prepare for a revelation. Before they’re deep-fried for that quintessential New-Mex dessert, sopapillas can be delicious, fluffy pockets served on the side of a meal — or stuffed with one. They’re sort of like a savory, over-sized beignet, but better.

You have to see it to believe all the chile and goodness that can be fit into one sopapilla — it’s like witnessing a miracle. Brave the crowd outside The Pantry in Sante Fe for this fresh-baked goodness, and be sure to snag one of their homemade cinnamon rolls while you’re at it.

14. Smuggling green chile in your carry-on is no joke. 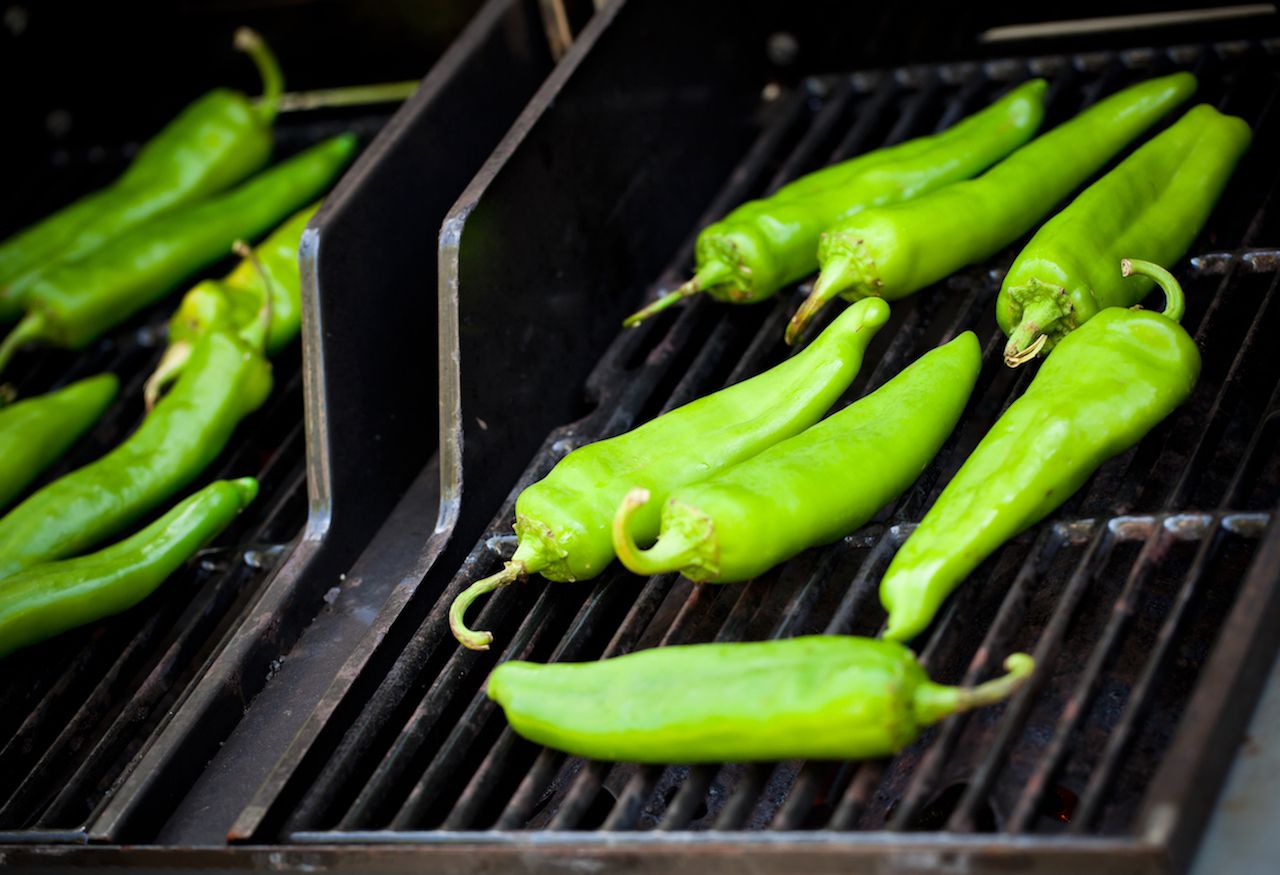 Of course, anyone who’s had their chile fix in New Mexico can sympathize with that feeling when you’re flying out of Albuquerque International and you’ve got a 10-pound bag of roasted green chile in your carry-on. The TSA agent will understand, right? Don’t worry, she’s in New Mexico — she most certainly will.

15. There’s magnetism in the earth, and you can feel it.

There’s no replacement for that perfect, freshly roasted Hatch green chile — just like there’s no hope of recreating those characteristic New Mexican moments. Anyone who’s been to New Mexico will understand that once you go, you know you’ll be back.

Some say it has to do with New Mexico’s energy vortexes. That is, the city of Taos, Chaco Canyon, and El Santuario de Chimayo are all purported to be centers of energy pouring out of the earth. Some say the experience can be not just meditative, but actually healing. Each spot has thousands of years of history, so who knows?

If you’ve never been, take some advice from those of us who have: Whether you believe in vortexes or not, get ready for the magnetism that is the Land of Enchantment.