Arizona is a magical place. It’s the only American state that contains one of the Seven Wonders of the Natural World — not to mention jumping cacti, amazing sunsets, and the best Sonoran hot dogs this side of the border. The terrain here is so varied that you can drive from the saguaro-filled desert to snow-covered mountains in a couple of hours. Here are 15 unreal moments you’ll experience while touring the Grand Canyon State. 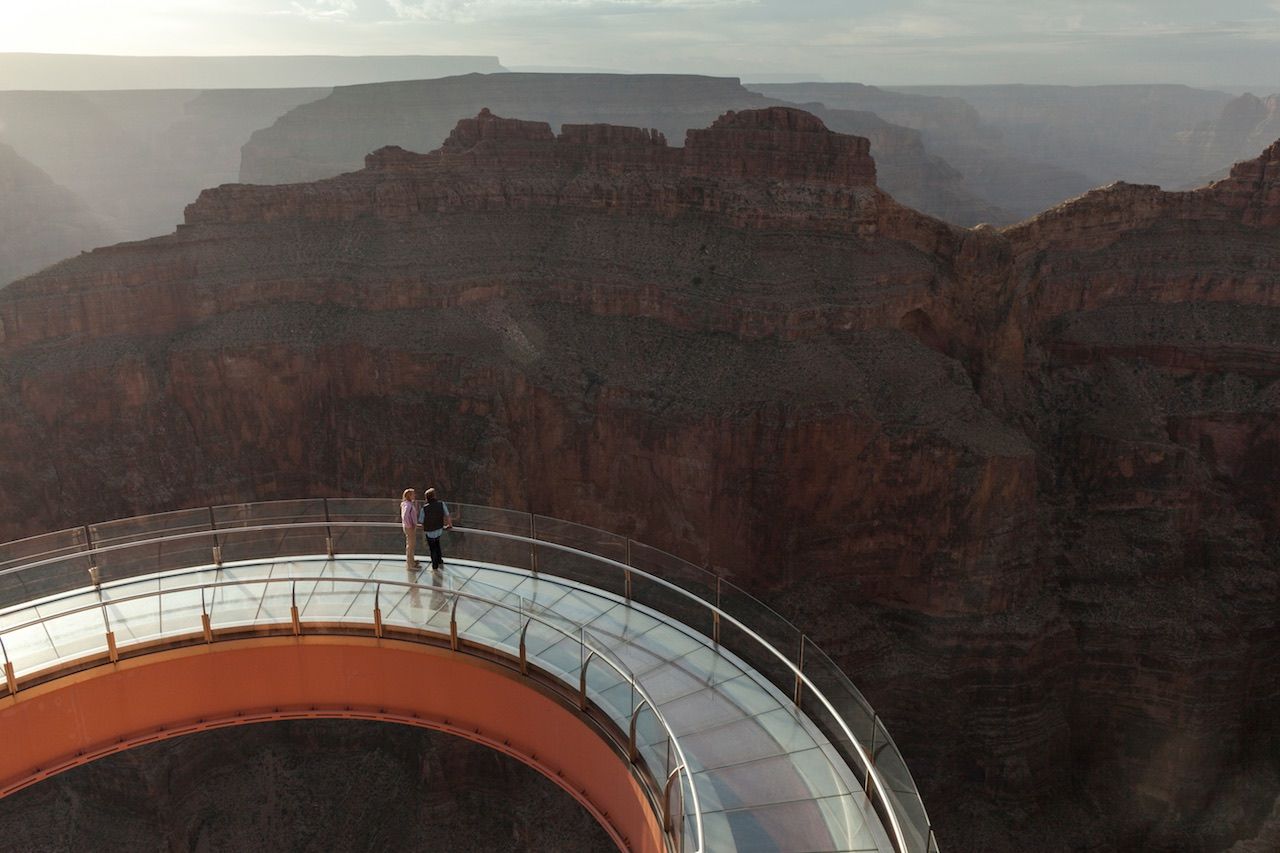 The 4,000-foot drop to the floor of the Grand Canyon seems even more impressive — and terrifying — when there’s nothing but glass between you and the practically bottomless view. Opened in 2007, the Skywalk at Grand Canyon West lets you walk onto a U-shaped platform extending 70 feet from the lip of the canyon. It’s a killer photo opp (you’ll need to enlist the services of the onsite Skywalk photographer, as cell phones / cameras aren’t allowed), yet totally safe — the Skywalk can easily bear around 70 tons, the equivalent of 800+ people.

When you’re done, keep the adrenaline flowing with a ride on the new 3,500-foot zipline at Hualapai Ranch, which will have you soaring nearly 1,000 feet above the floor of a side canyon.

2. Reliving the shootout at the O.K. Corral

The Wild West is still alive and kickin’ in Tombstone, where re-enactors dressed like Doc Holliday and Wyatt Earp square off with their six-shooters (talk about a dream job). See the saloon girls kick up their heels at the historic Birdcage Theatre, a former gambling hall and brothel, or check out Earp’s weapon at the Gunfighter Hall of Fame. While Earp and Holliday are buried elsewhere, the local Boothill Cemetery features the graves of the McLaury brothers, killed in the infamous O.K. Corral shootout of 1881.

3. Peering inside a dam(n) marvel

Considered one of the Seven Wonders of the Industrial World, the Hoover Dam is a massive 726-foot-tall structure spanning the Black Canyon on the Arizona-Nevada border. Though it’s no longer the tallest dam in the US, its new neighbor, the Mike O’Callaghan–Pat Tillman Memorial Bridge, is the world’s highest concrete arch, towering some 880 feet above the Colorado River.

Take the Power Plant Tour for $15 and you’ll see inside the beast, witnessing the dam’s 17 generators in action and the raging Colorado plummeting 530 feet down the Black Canyon in just 70 seconds. 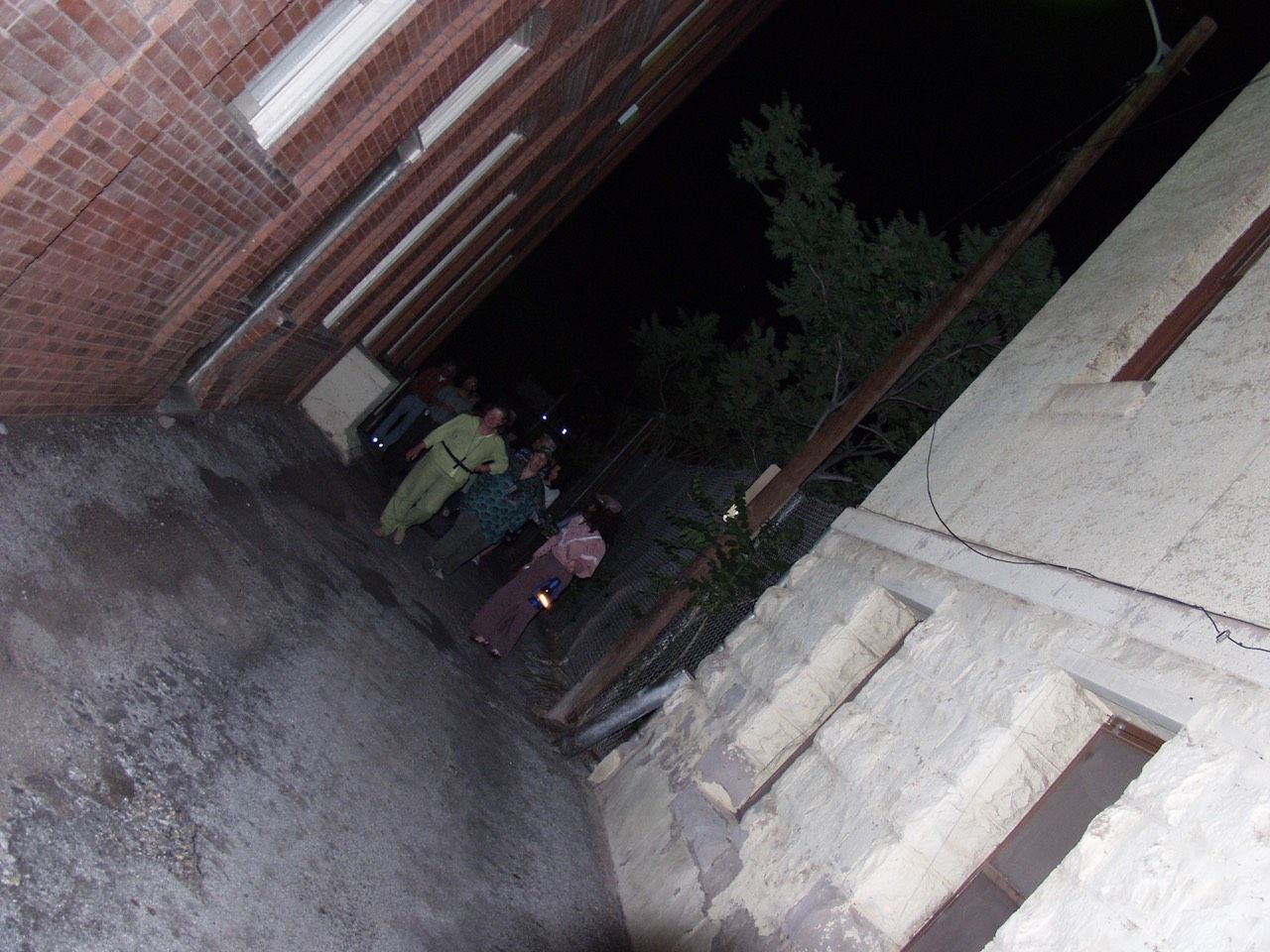 Once a bustling copper-mining town, Bisbee is now rumored to house more ghosts than people. Featured on Travel Channel’s Ghost Adventures, the Copper Queen Hotel and Oliver House B&B are among the town’s most notorious haunted sites. If you’re making a list, write these two down.

You’ll be introduced to plenty more otherworldly hotspots — and hear a few tall tales of murders, fires, and robberies — on the Old Bisbee Ghost Tour, a nightly 90-minute trek through crumbling buildings and dark alleyways. We can’t promise you’ll see any specters, but rest assured the vibe here is creepy enough that your overactive imagination will do the work for you.

5. Witnessing the hoodoo magic of Chiricahua

It’s easy to see why the towering rock formations of Chiricahua National Monument in Southeastern Arizona are called “hoodoos” — the precariously balanced structures look like they require a magical incantation just to stay upright. In actuality, hoodoos are formed by weathering and erosion and are kept vertical by layers of cemented rock. And maybe just a little bit of magic.

Chiricahua’s 17 miles of hiking trails offer plenty of vantage points from which to check out the hoodoos up close, or you can cheat your way through the nearly 12,000-acre park by taking the winding eight-mile scenic car route.

The competitors on Food Network’s cooking shows make prepping odd ingredients look easy, but pulling the spines off a cactus is no joke. At Desert Botanical Garden in Phoenix, chef and instructor Felicia Cocotzin Ruiz teaches a class on edible native plants, which can include the ever-present prickly pear cactus. Chances are good you won’t need this knowledge, but if you’re craving nopales tacos (a local delicacy) — or ever get stranded in the Mojave for some reason — you’ll be glad you learned how to burn those needles off.

Bio-Dome wasn’t just a cheesy ‘90s Pauly Shore movie. In 1991, eight scientists sealed themselves in a self-contained, $150-million-dollar glass bubble in Oracle (outside Tucson) with the goal of showing how humans could colonize new planets.

While the initial experiment was a flop (the crew reportedly started getting a little loopy, and suffocation was a real concern), Biosphere 2 was later purchased by the University of Arizona and turned into a research facility that opens to the public daily. Tour highlights include a tropical rainforest, 700,000-gallon ocean tank, and a giant pair of working rubber “lungs” that regulate air pressure inside the glass bubble.

The 48th state is known for its breathtaking sunsets. Year-round, you can watch cloudless skies bursting into shades of midnight purple, orange, and fuchsia at dusk from nearly any location in the state. But it’s Sedona that has some of the absolute best sunset photo locales. If photography is your bag, head here.

Two ideas to get you started: Watch the sun descend behind red-rock buttes at Chapel of the Holy Cross, a Zen-like Catholic sanctuary perched atop colorful rock formations; or drive to popular Airport Mesa, where the sherbet-colored sky bathes nearby Bell Rock, Cathedral Rock, and Courthouse Butte in angelic light. 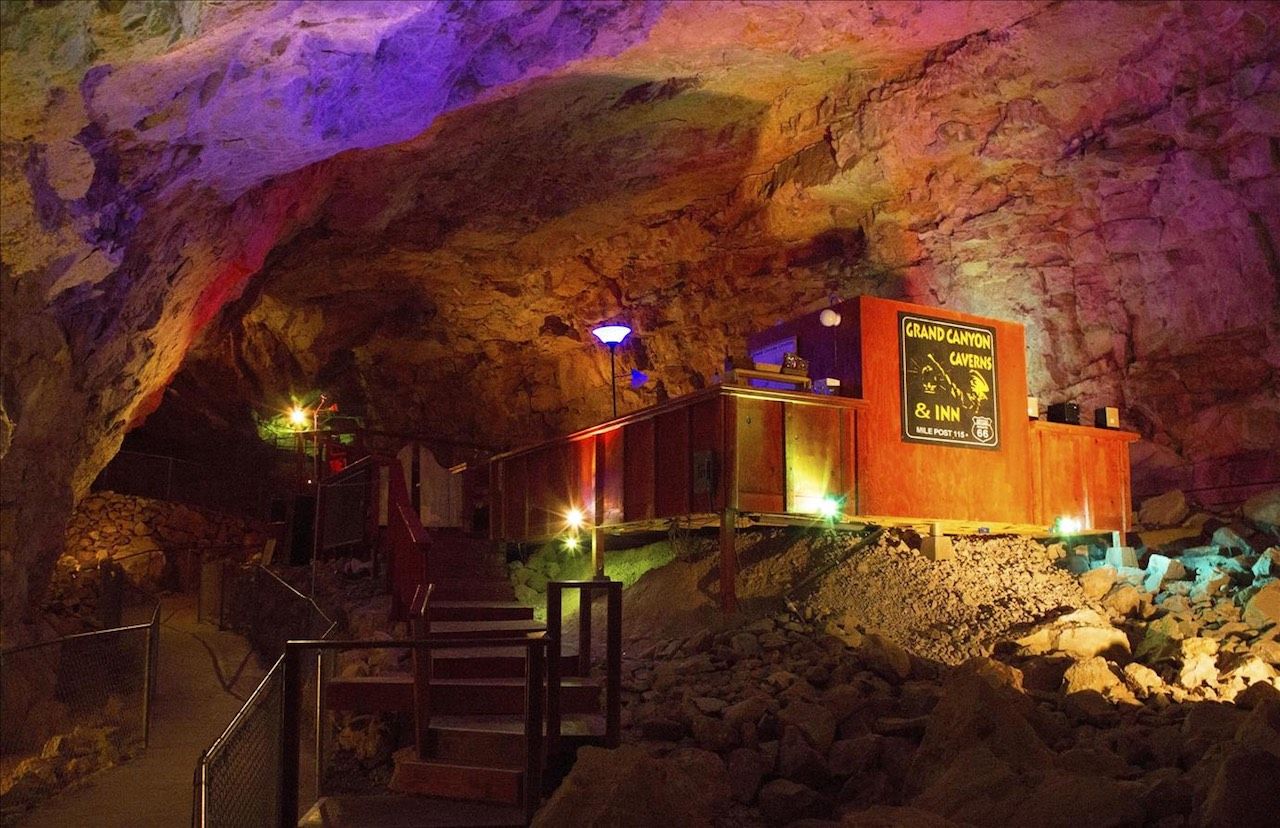 Billed as the world’s quietest (and largest) motel room, the underground suite at Grand Canyon Caverns near Peach Springs is more than 200 feet underground. Because this is a dry cavern system, you won’t find bats, bugs, or anything living here — except yourself. (For what it’s worth, there is above-ground lodging as well.)

The room itself is about 5,600,000 cubic feet when you factor in its 70-foot ceiling — not a typo — and is equipped with everything you need, including two double beds, a living area with pullout sofa, private library, and bathroom. Daytime tours of the adjacent caves will limit your privacy, but if you can swing the $850/night price tag, it’s worth it for the unique experience and bragging rights.

Military history buffs and aviation enthusiasts go gaga for the world’s largest aircraft boneyard. Located near Tucson, Davis-Monthan Air Force Base is home to some 4,400 aircraft, from F-100 Super Sabres to Starlifters, Lancers, and rows upon rows of B-52 bombers.

Most are used for display or parts, though occasionally people do see a historic fighter jet take off for greener pastures. Security here is tighter than Fort Knox, so don’t forget to make a reservation and get your temporary security clearance.

Petrified Forest National Park, near Holbrook, isn’t a forest at all, but rather a remote, 230-square-mile section of desert that’s home to hundreds of fossilized tree trunks dating back as far as 225 million years. It’s pretty much unlike anywhere else in the world.

There’s more to see here than chunks of stony wood, though. In just minutes as you walk, the otherworldly landscape changes from pink volcanic dunes to towering rock columns, impressive sandstone buttes, and a “painted” desert of reds and oranges.

There are two things downtown Flagstaff is known for besides the clattering sound of its historic railroad: brews and views. Hop a ride with the Alpine Pedaler and you’ll score the best of both. Simultaneously.

The local outfit hosts a rolling tour of three local bars and restaurants on Friday and Saturday nights, with you pumping the pedals of a 14-seat trolley or a smaller “Crab Bike” for six in search of your next craft brew fix. There’s a stereo pumping tunes to get you motivated (and to announce your arrival), plus plenty of water to keep hydrated between your stops for hops.

13. Experiencing the colors of America’s most famous slot canyon 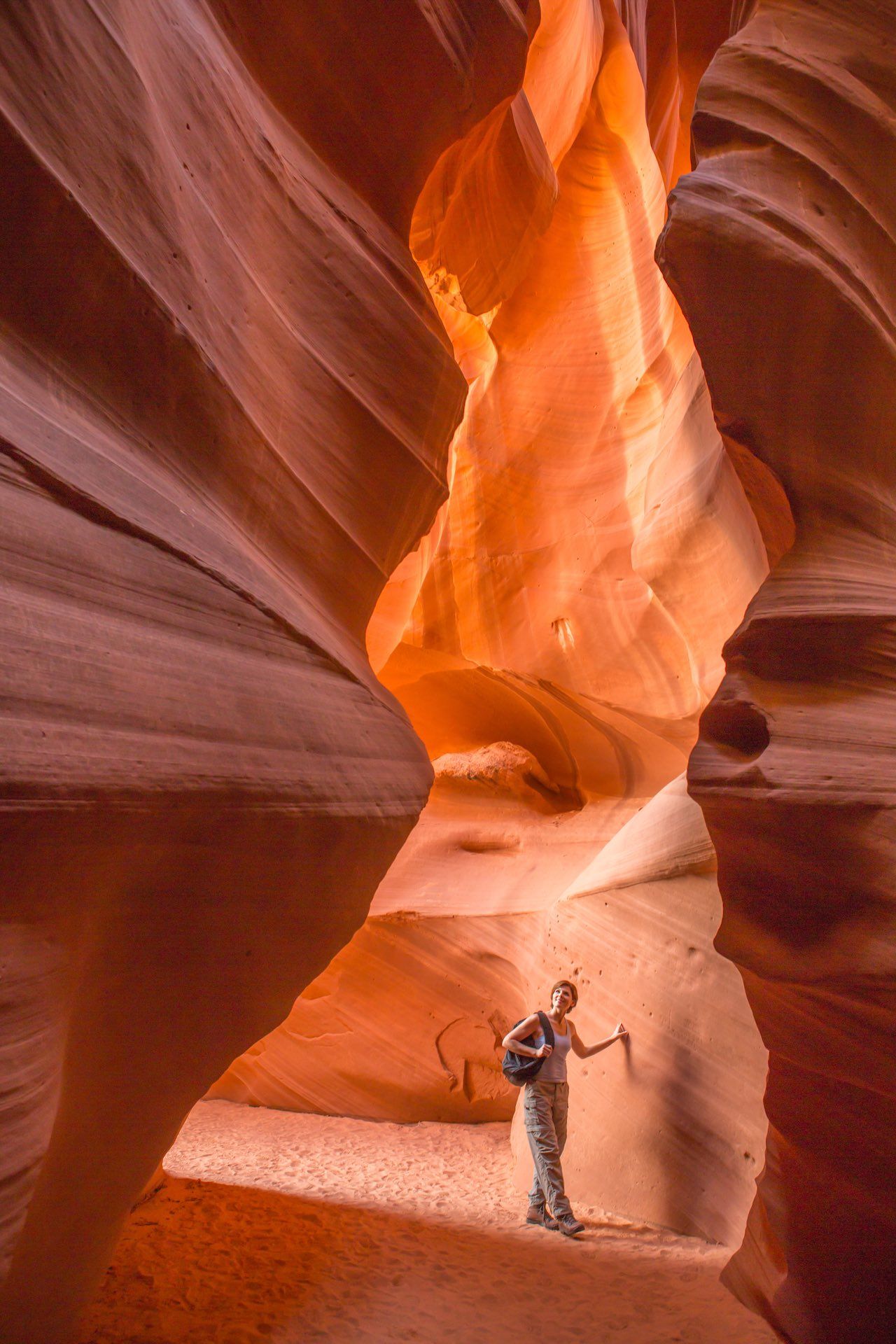 The undulating red waves of Antelope Canyon have been featured in countless photographs and paintings — not to mention in National Geographic magazine. In fact, the world’s most expensive pic was taken here, a black-and-white image by photographer Peter Lik that sold for a whopping $6.5M in 2014.

Keep in mind that you can’t just wander into the breathtaking slot canyon. It’s located on Navajo land near Page, and you’ll need to pay an $8 entrance fee and book a tour with one of the local guides. And bring your camera, because…who knows?

There’s a reason why bicycles and motorcycles are banned from entering the drive-thru portion of Bearizona Wildlife Park. Come on an active day and you could have black bears, sheep, and even wolves pawing at your car window or climbing on your hood. (Don’t worry; the animals aren’t prone to attacking cars — though they may knock off dangling accessories). The best part? If you do arrive on two wheels, there are free cars to use to drive through the park.

In addition to the three-mile drive, there’s also a zoo, a birds of prey show, plus a cave where you can watch the bears through a window. It may sound like its for kids, but when a bison gets this close to licking you, it doesn’t matter your age.

The Southwest is filled with dude ranches purporting to offer a slice of cowboy life. But in Scottsdale you’ll find the only official school for cowboys: Arizona Cowboy College. Featured on the CMT reality show Cowboy U, the school is led by real-life wrangler Rocco Wachman, former host of the series. Join him and you’ll learn multiple horseback riding styles, as well as jumping, wrangling, and roping skills that could prove useful in the event of a zombie apocalypse. Or at any party. Or on your dating profile. The possibilities? Endless.

This post is proudly produced in partnership with the Arizona Office of Tourism.
Tagged
Travel Arizona, United States Arizona: Go Grand
What did you think of this story?
Meh
Good
Awesome
✖
travelstoke
Download the mobile app
stoked by