California is a state of contrasts — we have ocean, deserts, redwoods, the highest point in the lower 48, the oldest living tree in the world, beer, wine, and everything in between. Head out on the open road, roll down your windows, and take the state in.

Sand Dollar Day Use BeachBig Sur, United StatesSand Dollar beach is one of the easiest access and friendliest breaks in Big Sur. It’s no secret spot, but the fact that it’s so far from any major town means you’ll likely only have a few other people in the water with you. It’s the biggest beach in Big Sur, so it’s also a good spot to find some sand and spend the day. #hiking #surfing #bigsur #adventure #accessbigsur

Hugging the Pacific Coast for much of the state, a road trip on Highway 1 is a California classic. The entire route is about 650 miles long, running from Dana Point in Southern California to near Leggett in Northern California. It’s well worth it to settle in and drive the whole route, but if you’re pressed for time, several sections do stand out.

Palomarin Trail Head-Alamere FallsBolinas, United StatesAlamere Falls is a 8.4 mile and beautiful coastal trail in southern Marin. At the end of the hike you end up at a waterfall that runs into the ocean. Tips: Get there early to beat the crowds and to score a parking spot. Wear shoes with a good grip so you don’t fall on your bootay. #hiking

Santa Monica State BeachSanta Monica, United StatesThis is LA’s sandy main squeeze – Santa Monica SB is a long stretch of golden sand and steady surf. On the weekends thousands of Angelinos and visitors flock to the SM beach. Rent a bike and cruise to Venice Beach and / or cool off by jumping in the Pacific. #beach #santamonica #park #surfing

This section is referred to as the Pacific Coast Highway (or PCH). From Santa Monica you’ll pass Pepperdine, Zuma Beach, Malibu, Mugu Rock, and the Point Mugu Missile Park. Stop for a bite at Neptune’s Net near Point Mugu. This is a short but sweet section of Highway 1, about one hour without stopping, which will whet your appetite to keep driving north and begin your obsession with keeping the Pacific Ocean in view at all times… You will feel like you’ve truly arrived in California, as this section is often featured in movies and t.v. commercials.

Malibu PierMalibu, United StatesIf you are driving through Malibu on the Pacific Coast Highway, pull off the road and check out the Malibu Pier. It’s a nice little stroll to the end of the big ‘ol dock where there is a very good cafe and several hungry seagulls. There are almost always surfers and SUP riders catching waves next to the pier, check them out. #beach #malibu #free

Arguably the most scenic section of Highway 1, the road twists and turns high above the ocean here. Start this trip in Cambria, a cute, piney town near an expanding wine region. Head north, past Hearst Castle, stopping for one of several tour itineraries, then onto the Big Sur area. (Check out 24 Hours in Big Sur if you want to prolong your time in the area.) End in Carmel, pine-filled like Cambria, but with a beautiful white sand beach and an arts history.

The flip side of Highway 1, 395 hugs the eastern side of the Sierra Nevada. Much less visited than the more accessible western side, the east side is steeper, drier, and more dramatic. Start in historic Bridgeport if you come over the Sonora Pass, or in Lee Vining if you come over the Tioga Road through Yosemite. Stop for a snack at the Whoa Nellie Deli, in Lee Vining, strangely delicious food at a gas station (seriously!). Head to Mono Lake, a beautiful, stark spot great for photography.

Mono Vista RV ParkLee Vining, United StatesAwesome place to stop for a walk down to the spectacular Mono Lake. There’s a board walk bike path and cool trails down to the lake from the parking lot.

Then it’s south past June Lake, Mammoth Lakes, Bishop, Big Pine, Independence and Lone Pine. Each town has its own character, and there is a lot of great, if rugged, hiking in this area.

Skelton LakeMammoth Lakes, United StatesHiked up to Skelton Lake in Mammoth with some friends and we had a blast jumping into the lake! The water was brrrrrrr!! #hiking

The East side of the Sierras will keep you company over your right shoulder as you drive south. Eventually the White Mountains come into view, habitat of the oldest living tree in the world, a bristlecone pine. Badwater BasinInyo County, United StatesThe salt flats in Badwater Basin are 282 feet below sea level. In the summer it is extremely hot walking out on the salt flats. It was about 115 degrees when I was there. Bring lots of water! The salt crystals are really a cool sight to see. If you want you can taste the salt. #nationalpark

This trip can be done from high point to low point or vice versa. If you’ve just done the Highway 395 route, going high to low makes sense. But don’t you want to trace the route of the Badwater Marathon, where participants run 135 miles from the lowest point in the United States, Death Valley, to Whitney Portal, trailhead to the highest in the lower 48? Your mission will be significantly easier since you’ll be in a car, but you’ll still be able to take in the dramatic changes in scene and elevation without burning holes in your running shoes.

Upon arrival at the end of the route, the Whitney Portal Store at the campground is well-stocked and serves food. Make sure to bring along some ibuprofen to deal with the altitude headache, which will be well worth it. You’ll want reservations at the campground if you plan to stay; the next day you can day hike on the trail to Mt. Whitney but if you want to backpack you’ll need a permit. Otherwise head back down to Lone Pine where there are a number of hotels. For this trip you’ll need a designated driver or to take the trip very slow. California’s Sonoma County is well-known for its wine, but our beer is equally worth a road trip. Start off in Petaluma at Lagunitas Brewery. Besides great food and beer, they often have live music. Other Petaluma breweries are 101 North, Petaluma Hills Brewing Company, and Dempsey’s. Next stop: Santa Rosa’s Russian River Brewery, famous for their Pliny the Elder, recently named the second-best beer on the planet. Hordes of fans road trip and line up for the yearly release, but it’s worth a stop anytime for their other brews as well. Their sampler allows you to try out 18-20 different beers. Bear Republic in historic Healdsburg is filled with racing paraphernalia as well as great beer. Rest in Healdsburg’s historic plaza and decide if you’re ready to continue on to the Mendocino County part of the tour…. Mendocino County, just north of Sonoma, also has a lot of great breweries. Head to Booneville, which has its own language and unique culture, for the Anderson Valley Brewing Company. Keep driving out to the coast.

Big RiverMendocino, United StatesRent an outrigger and paddle up the estuary. Bring a suit! It can get hot when paddling upstream in the sunshine, and rocks are tempting to jump off into the water!

Take a break in Mendocino for a stroll or perhaps a paddle up Big River; Catch a Canoe and Bicycles Too is conveniently located right on the river and has outrigger canoes and SUP gear as well as kayaks.

Then it’s back on the road, past Mendocino to Fort Bragg and the North Coast Brewing Company. Head back over to 101 and up to often-foggy Eureka in Humboldt County and the Lost Coast Brewery.

Whether you ended up in Eureka on the extended beer tour, or are starting fresh, this trip takes in a less-visited part of California, one that feels remote from the more inhabited parts of California. It’s not quite California, not quite Oregon…. This is a region referred to as “the State of Jefferson,” and has an independent feel. From Eureka, head slightly south to the Samoa Cookhouse for an amazing logger-style family breakfast to get the trip started right. Past Eureka it’s north to Trinidad with a spectacular coastline of beaches, dramatic rocks, and tide pools.. Then it’s on to Redwood National and State Parks.

Stout Grove TrailheadCrescent City, United StatesOne of my favorite trails I walked in the redwoods. Felt like walking among giants. #hiking #redwoods #forest

Don’t miss the Fern Canyon Trail, thick and verdant with ferns to the beach, or the Lady Bird Johnson Grove, with its particularly beautiful trees and light. Camp under the redwoods to really experience the peacefulness of these trees. 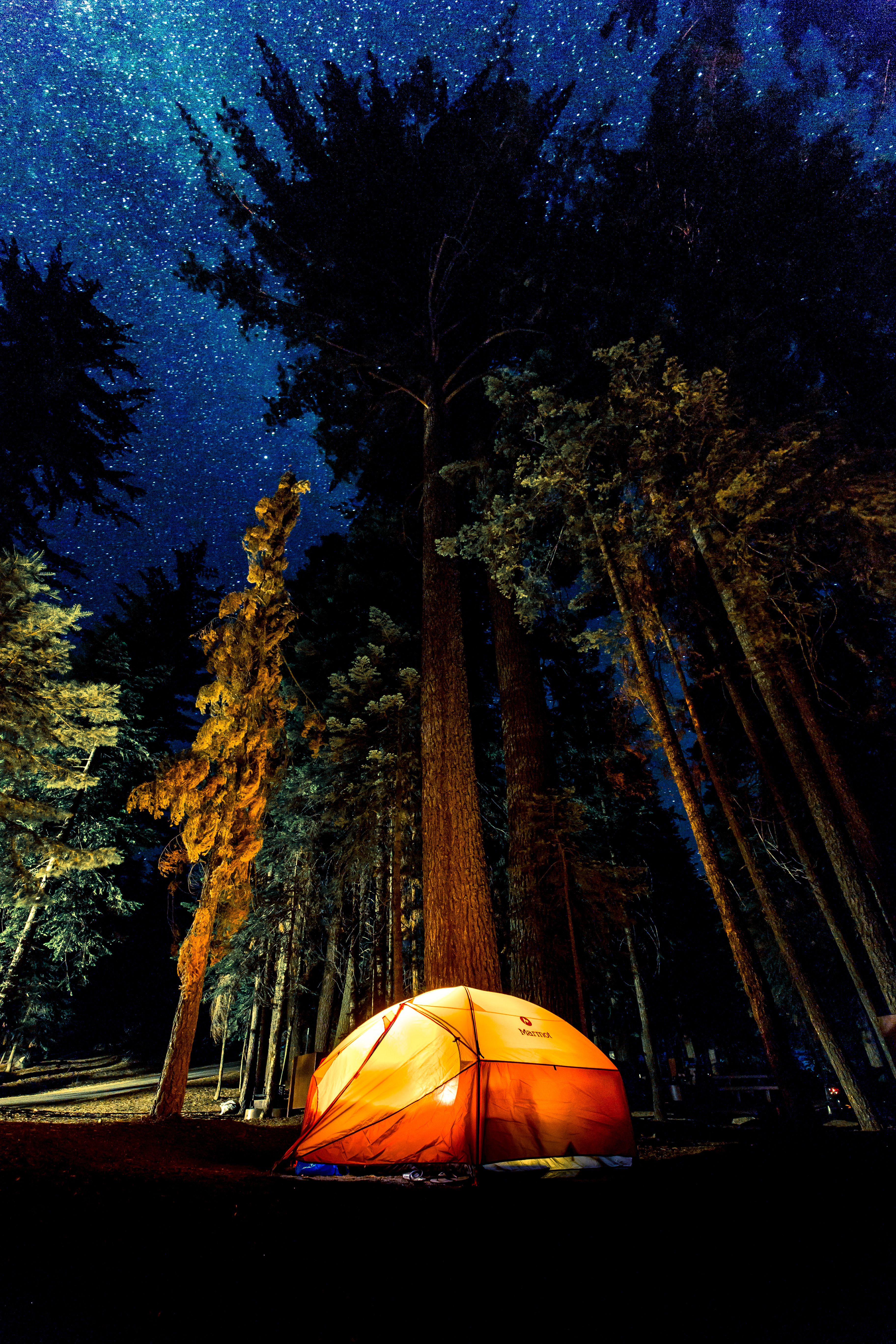 Next it’s further north, to Crescent City, before cutting east to Jedediah Smith Redwood State Park and its redwoods, which are also worth a visit.