We expect churches to be elaborate. Gaudí’s Sagrada Familia in Barcelona is so grand it’s been under construction since 1882. Saint Basil’s Cathedral in Moscow looks like it had its blueprints swapped for a basket of Easter eggs. But monastic life is known for its simplicity, and monasteries generally make us think of more basic architecture and less central locations. These seven monasteries are as off the grid as it gets, built everywhere from cliff sides to volcano tops, and they’re just as stunning as any house of worship. 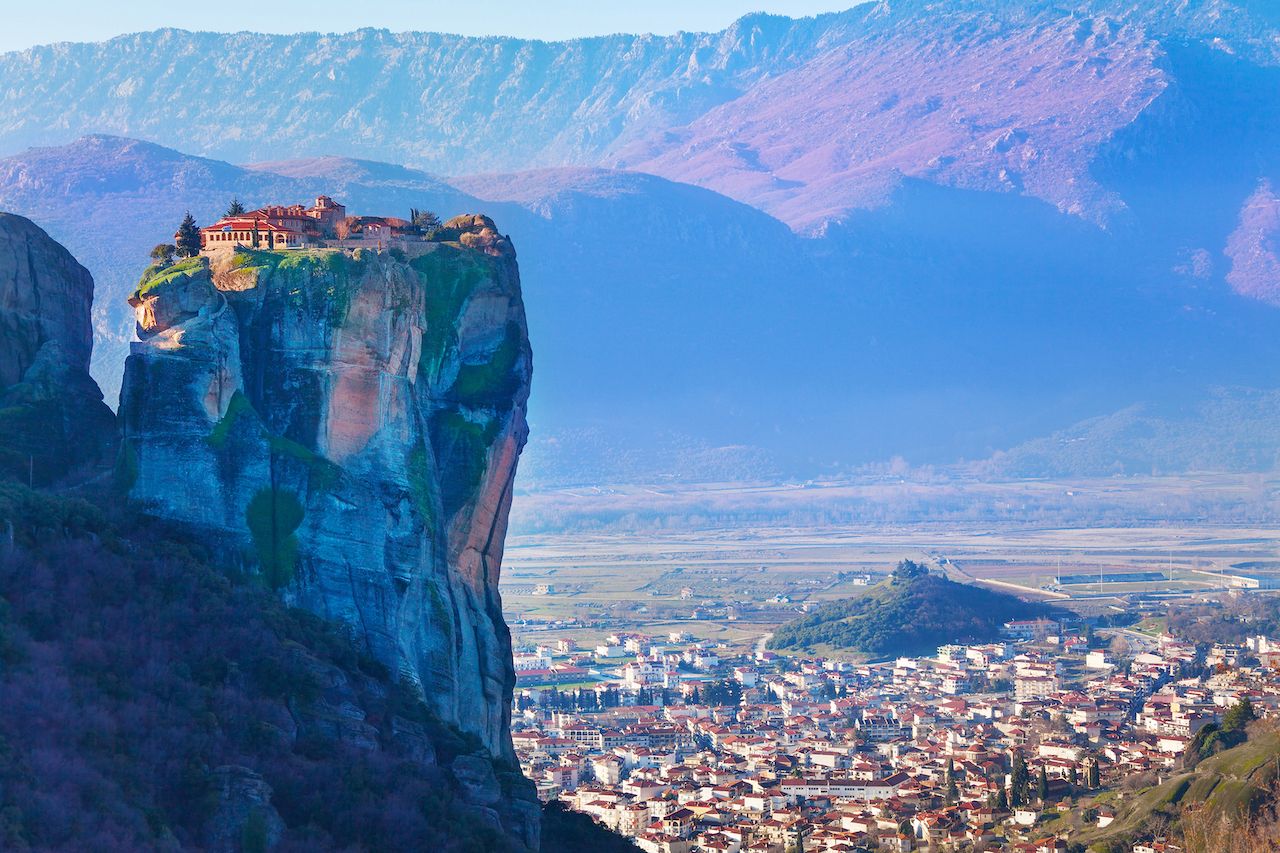 Built in the 15th century, this Eastern Orthodox monastery overlooks the Peneas Valley in central Greece from the summit of a massive sandstone formation called Meteora. You’ll break a sweat visiting, but the 1,300-foot climb and 140-step staircase are worth the views. The monastery is one of six active Meteora monasteries, out of 24 total, and the only one with UNESCO World Heritage status. Inside, you’ll find rock reliefs and 17th-century frescoes that are remarkably well-preserved. 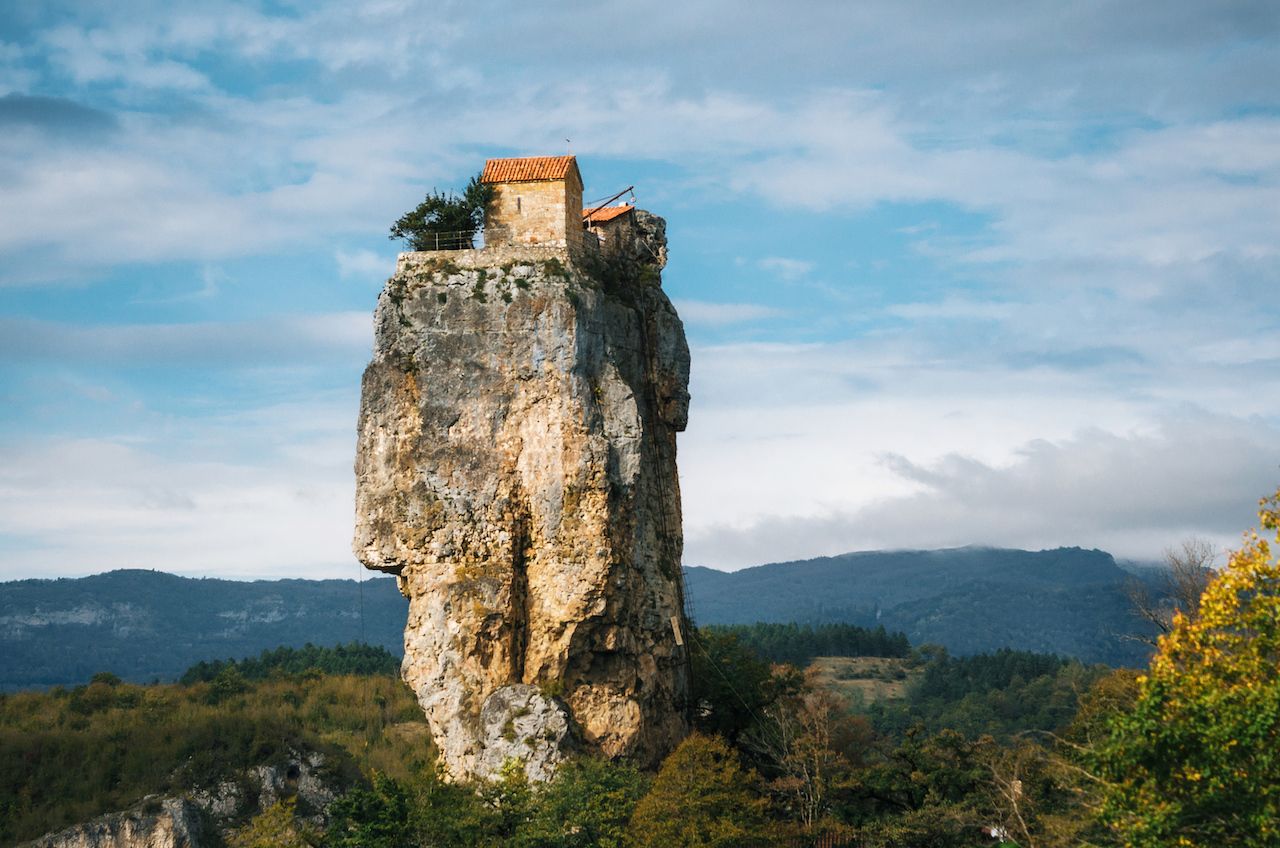 The monastery that sits atop the Katskhi Pillar in western Georgia is humble, but it’s hardly unimpressive. The 130-foot monolith was a pagan holy site until the monastery was established in the seventh century, some time after Georgia officially adopted Christianity. In ruins for centuries, the site was restored in the early 2000s after local monk Maxime Qavtaradze moved in and started a new wave of religious activity. Qavtaradze gets up and down using a long iron ladder, but the site is closed to the public. 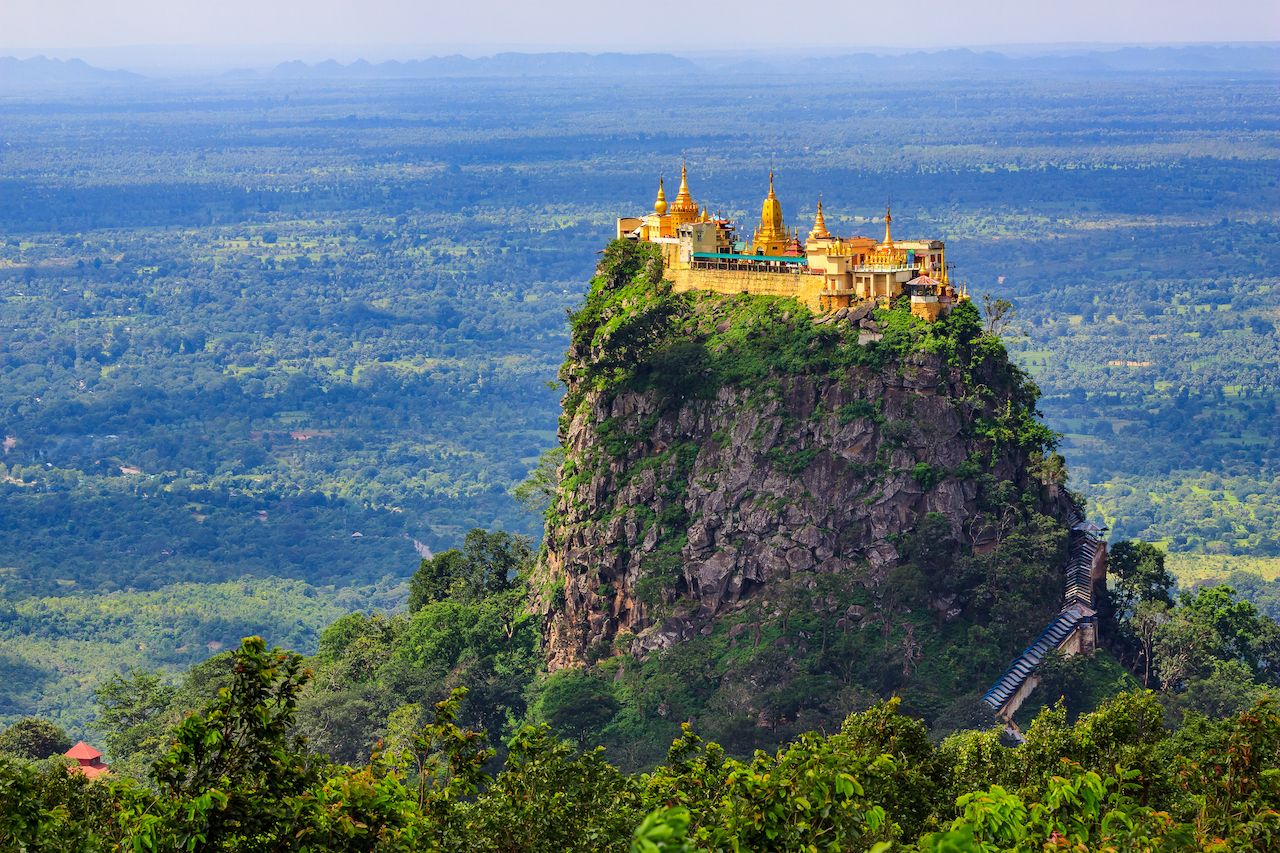 Mount Popa is an extinct volcano on top of which sits a monastery crowned with bright gold stupas. Legend has it that dozens of nats, spirits worshipped in Myanmar, inhabit the mountain, but you’re more likely to encounter macaque monkeys scurrying around the monastery. Visitors can follow 777 steps to the summit of Mount Popa and often do so as a day trip from nearby Bagan, an ancient, temple-filled city and one of the best places in the world to go hot-air ballooning. 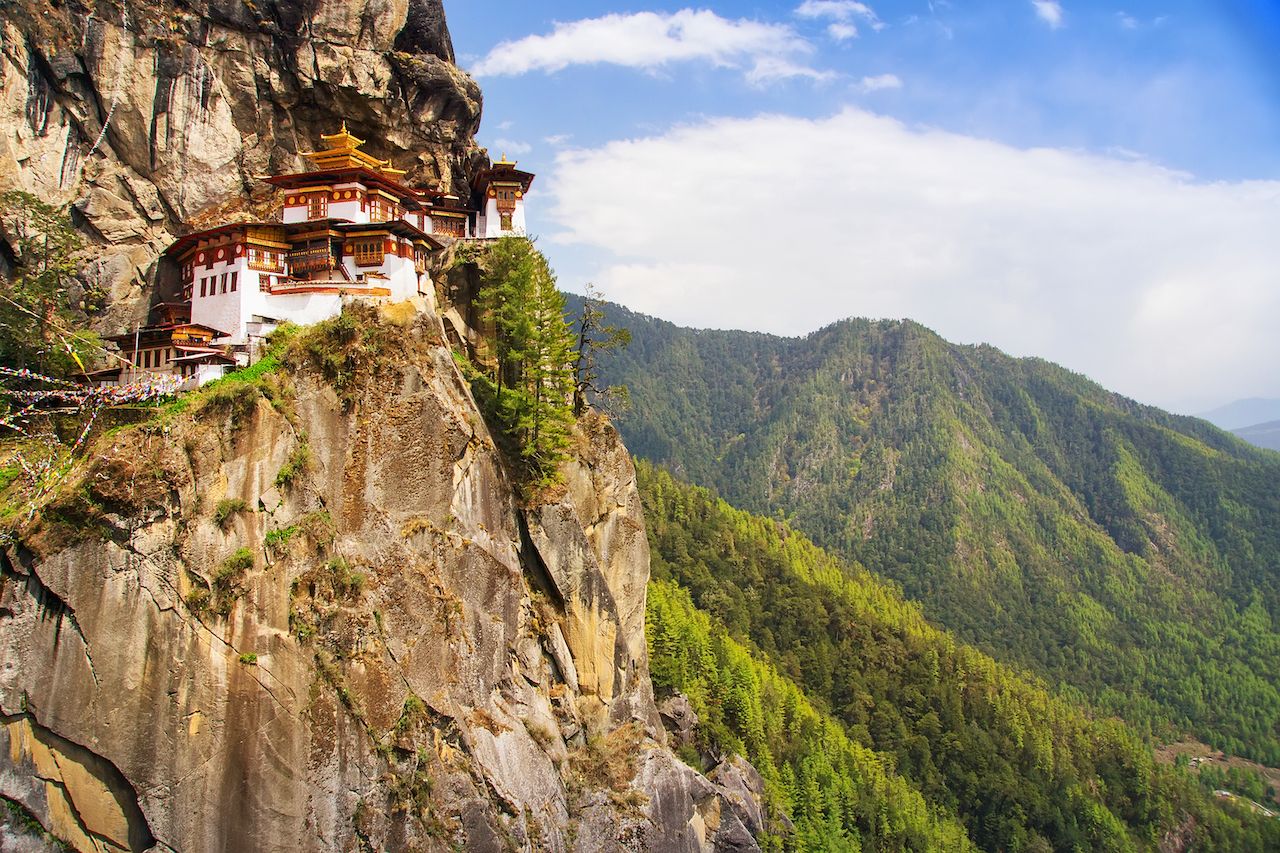 Sometimes called Tiger’s Nest Monastery, Paro Taktsang slants down the side of a cliff roughly 10,000 feet above sea level. It’s surrounded by the historic Paro Valley and is considered one of the holiest sites in Bhutan. There are multiple mountain paths that lead up to the monastery. It’s no easy trek, but once you’re there, you’ll get to tour the four main temples, the courtyard and prayer wheel, the meditation caves, and the rest of the complex. In the Hall of Thousand Buddhas, you’ll stumble upon a tiger sculpture that helps explain the monastery’s nickname. 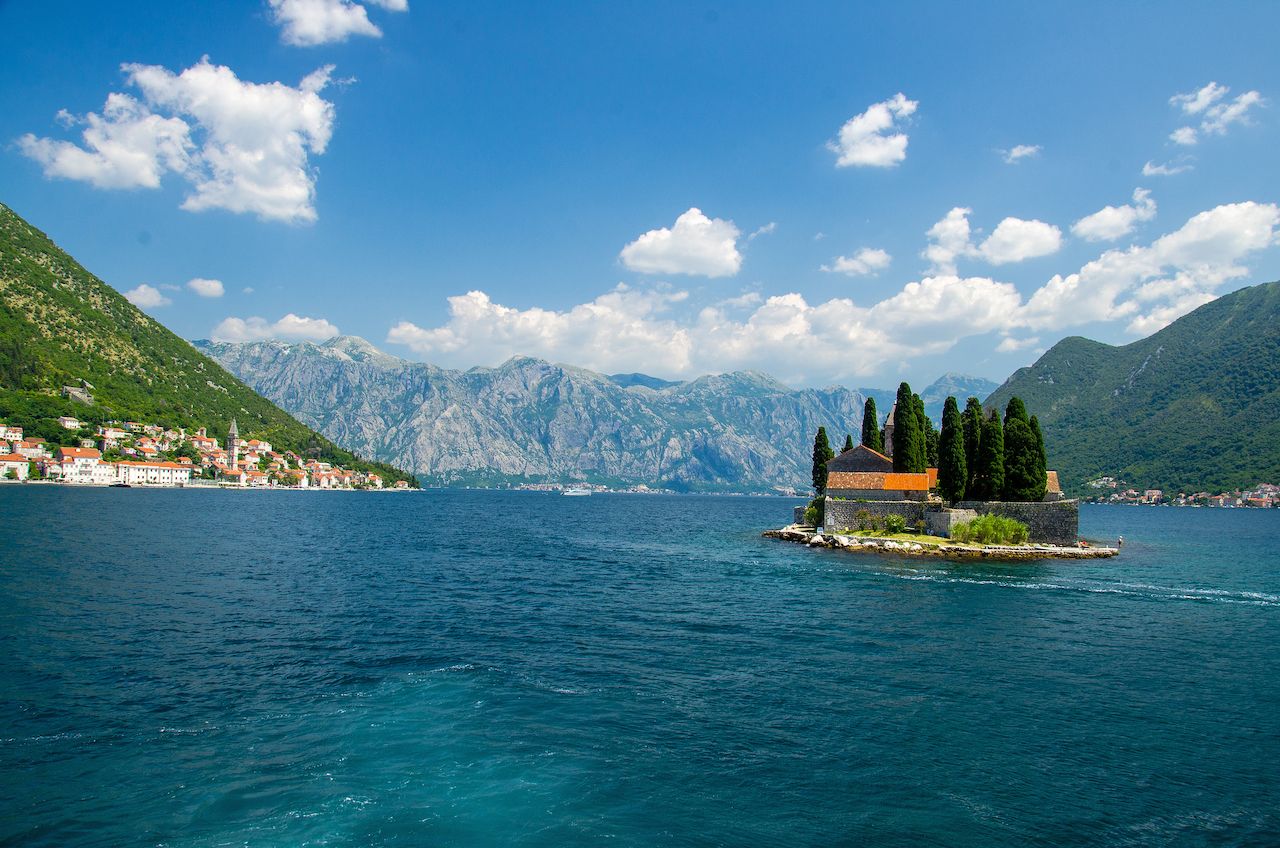 St. George Monastery is a Benedictine holy site built on an island in the middle of the Kotor Bay. Granted, it’s a pretty small island. For the most part, what’s left of the land is split between a cemetery for the people of nearby Perast and rows of cypress trees planted by monks after the monastery was built in the 12th century. Tourists are not permitted to visit, but there’s no rule against admiring from afar. 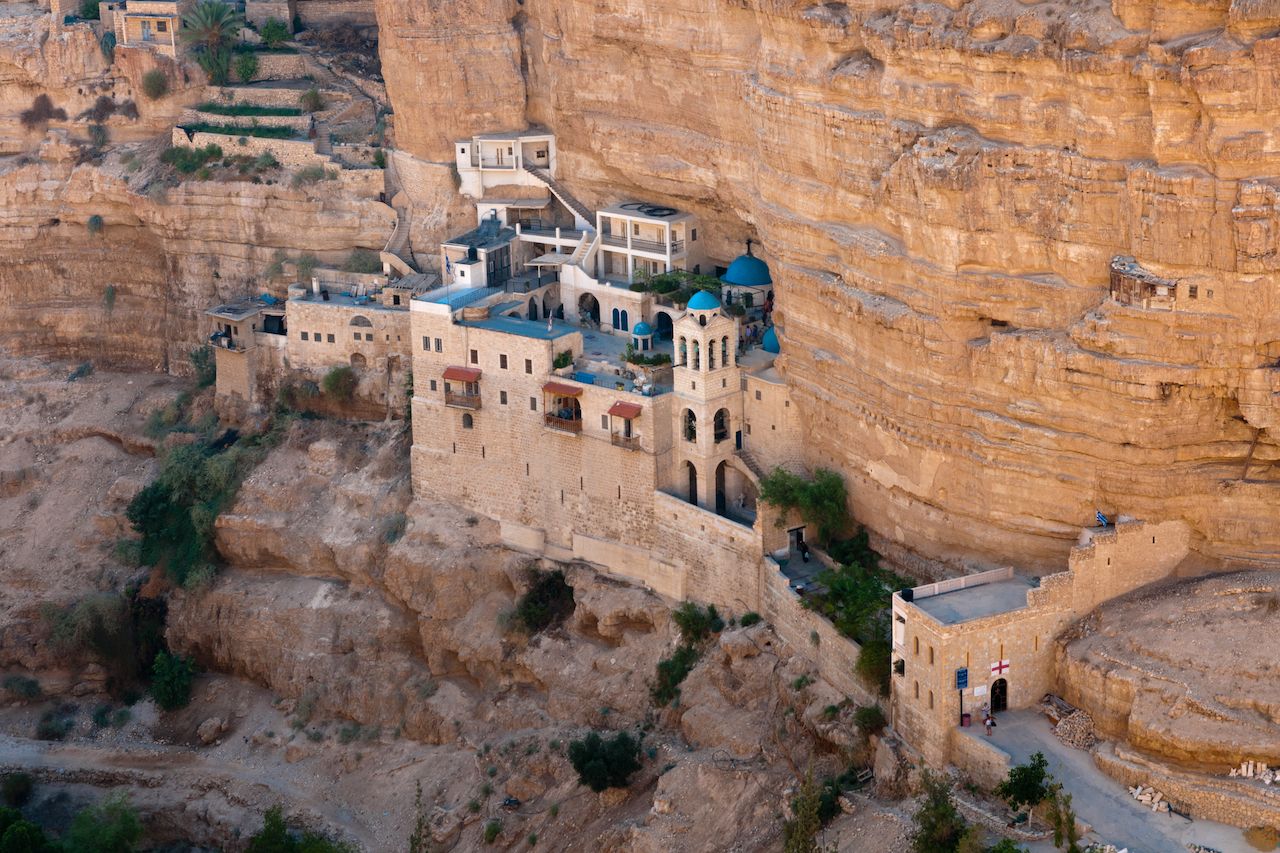 Israel’s St. George Monastery is positioned between Jerusalem and the Dead Sea in the Judean Desert, where it’s been clinging to a cliff above the Wadi Qelt gorge since the fifth century. Many believe that Wadi Qelt is the biblical “valley of the shadow of death” from Psalm 23. Visitors can reach the still-active monastery on foot. Unlike some other holy sites, women are allowed to make the pilgrimage as well as men. 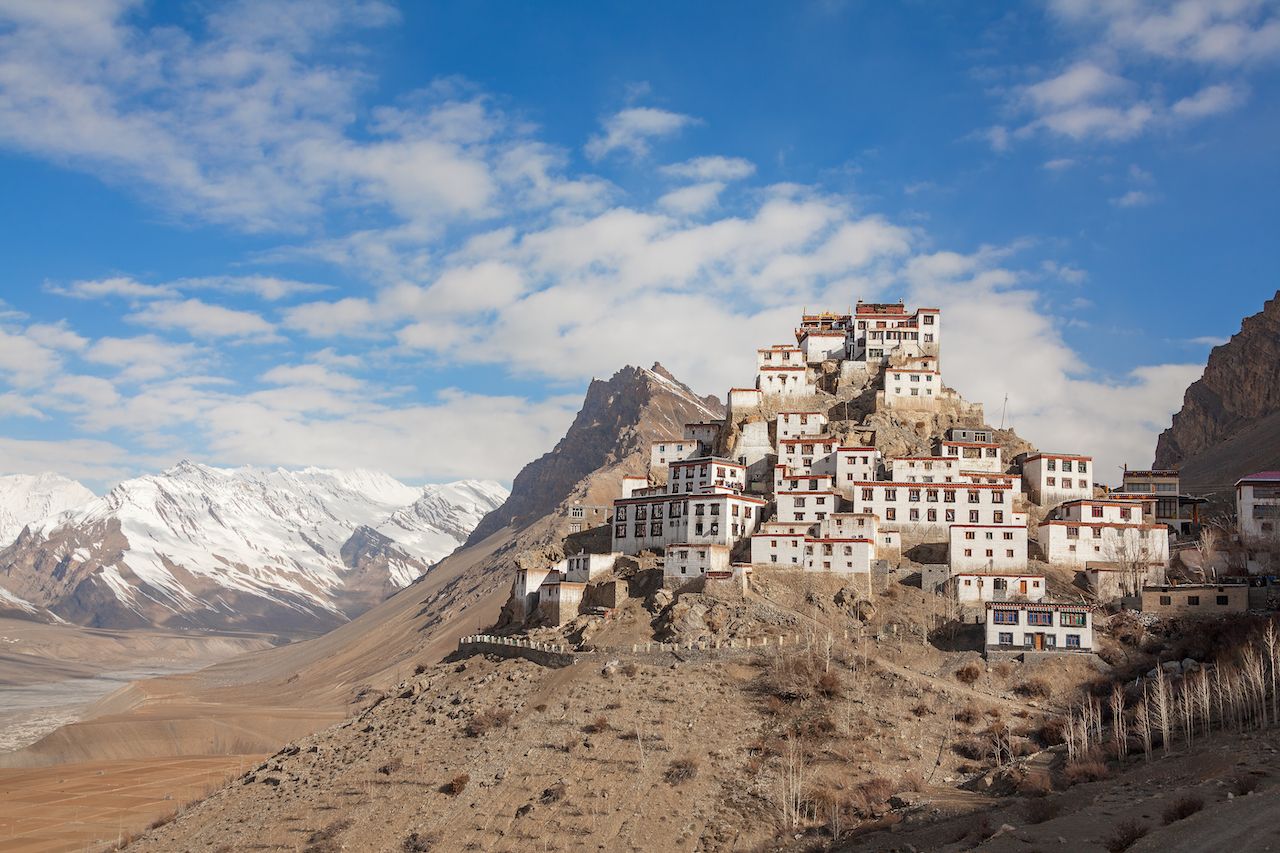 This remote Tibetan Buddhist monastery is located in the Spiti Valley of Himachal Pradesh, the gateway to the Western Himalayas in northern India. It sits at an elevation of more than 13,500 feet and is thought to date at least as far back as the 11th century. Inside the three-floor monastery are various Buddha images, wall paintings, and a collection of ancient texts. It’s active to this day and welcomes monks from the Gelung sect of Tibetan Buddhism, assuming that they can actually find the monastery.