There’s a reason most of us hit the drive-thru when we’re craving a Big Mac. Convenience is a factor, but the drab dining areas waiting behind those golden arches don’t exactly make us want to stick around, either. Of course, McDonald’s isn’t the only offender. Utterly lacking in ambiance and originality, most fast-food restaurants deliver what their descriptors promise and nothing more — with a few notable exceptions.

Select locations around the world have gone above and beyond to entice diners with unusual architecture, amazing views, and fun gimmicks that make them more than just places to stop after a long day at work or night of partying. From serving Whoppers in a sauna to dishing up Crunchwrap Supremes by the seashore, here are nine fast-food joints worth visiting whether or not you have a weakness for quick and easy grub. 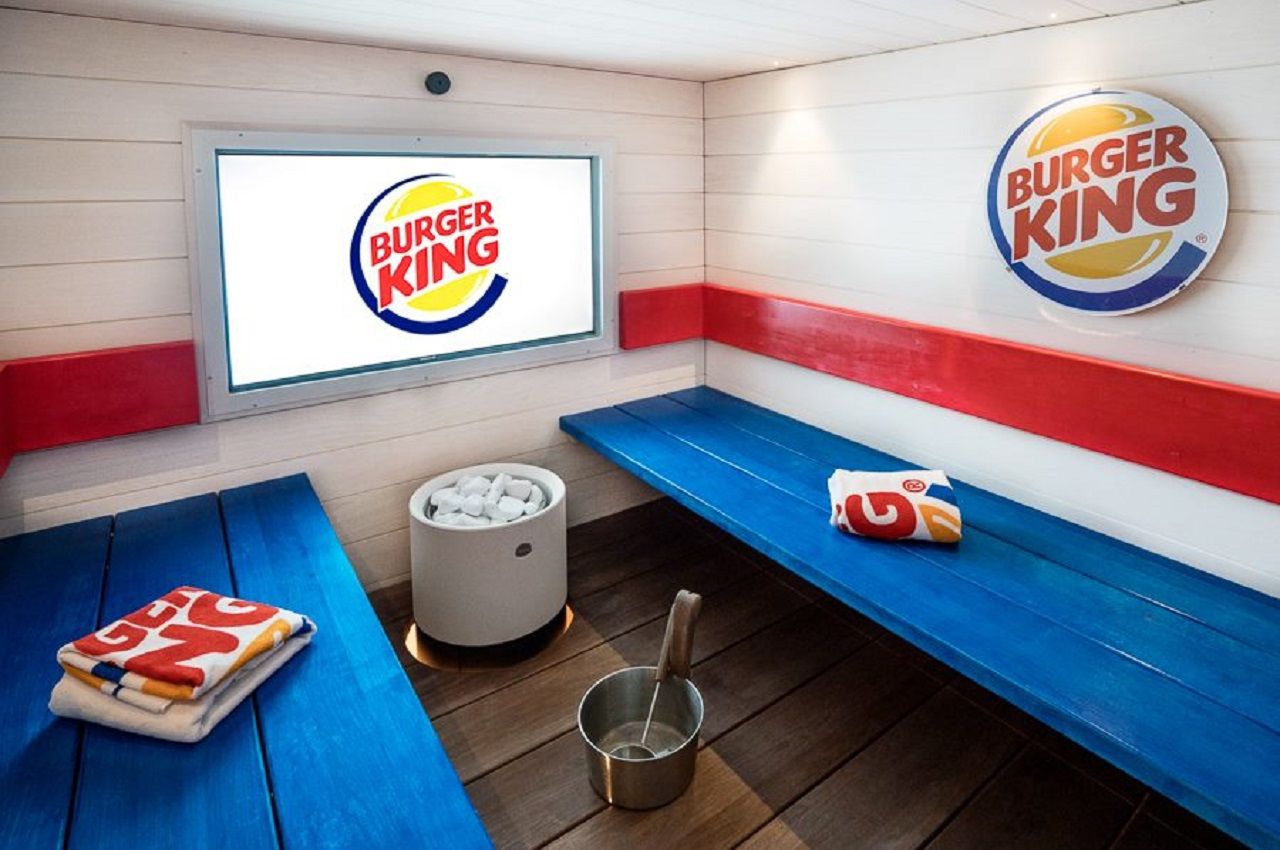 Greasy burgers and wellness treatments are an unlikely combo, but that’s exactly what’s on the menu at this Burger King spa in Helsinki. The standout attraction is the 15-person sauna where patrons can scarf down Whoppers while getting their sweat on. Reserving the sauna for private events will run you $280 for three hours, a promotion targeted toward businessmen and birthday celebrants alike. Also onsite at the Mannerheimintie BK branch are facilities like a shower, locker room, and media room where you can watch TV or play video games.

Coffee probably doesn’t taste too different at 8,000 feet, but this ski-thru Starbucks makes getting your caffeine fix a whole lot sweeter. While you can get regular service inside, the best part about this location is the unusual takeout window, which helps snow-sports enthusiasts get a hot cup of joe between runs without having to shed their gear. Those who want to see what the ski-in, ski-out service is all about without hitting the slopes can also take the Squaw Valley Ski Resort’s aerial lift straight to this Starbucks with a view. 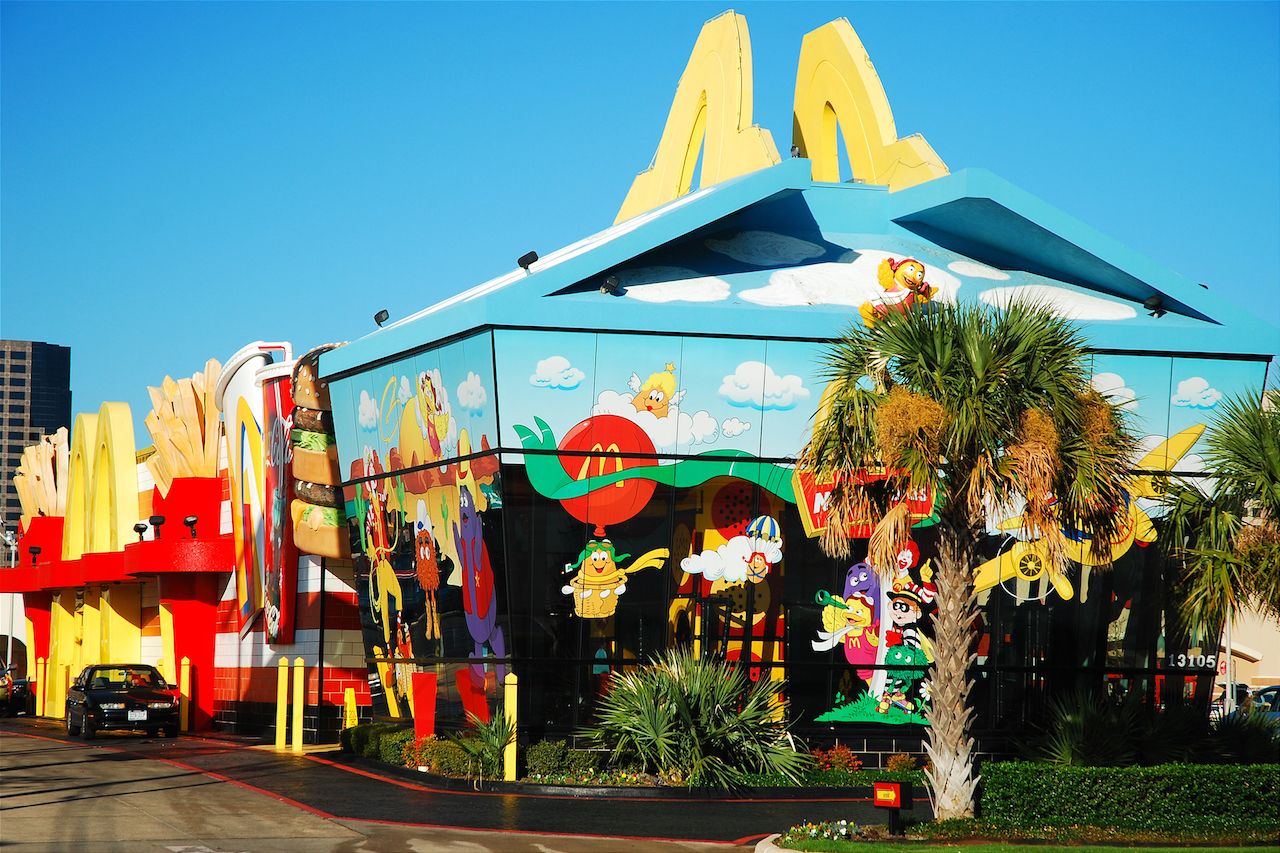 This unusual restaurant near the LBJ Freeway is shaped like a giant Happy Meal box, complete with super-sized Big Macs, French fries, and Coke cups decorating the outside. The interior also has some appeal for adults, featuring classy touches like chandeliers and mahogany booths. Step inside for one of the happiest meals you’ll ever eat or swing by to snap a photo of the giant Ronald McDonald out front. Just don’t miss out on seeing this one-of-a-kind Mickey D’s while in Dallas, especially if you’re traveling with kids. 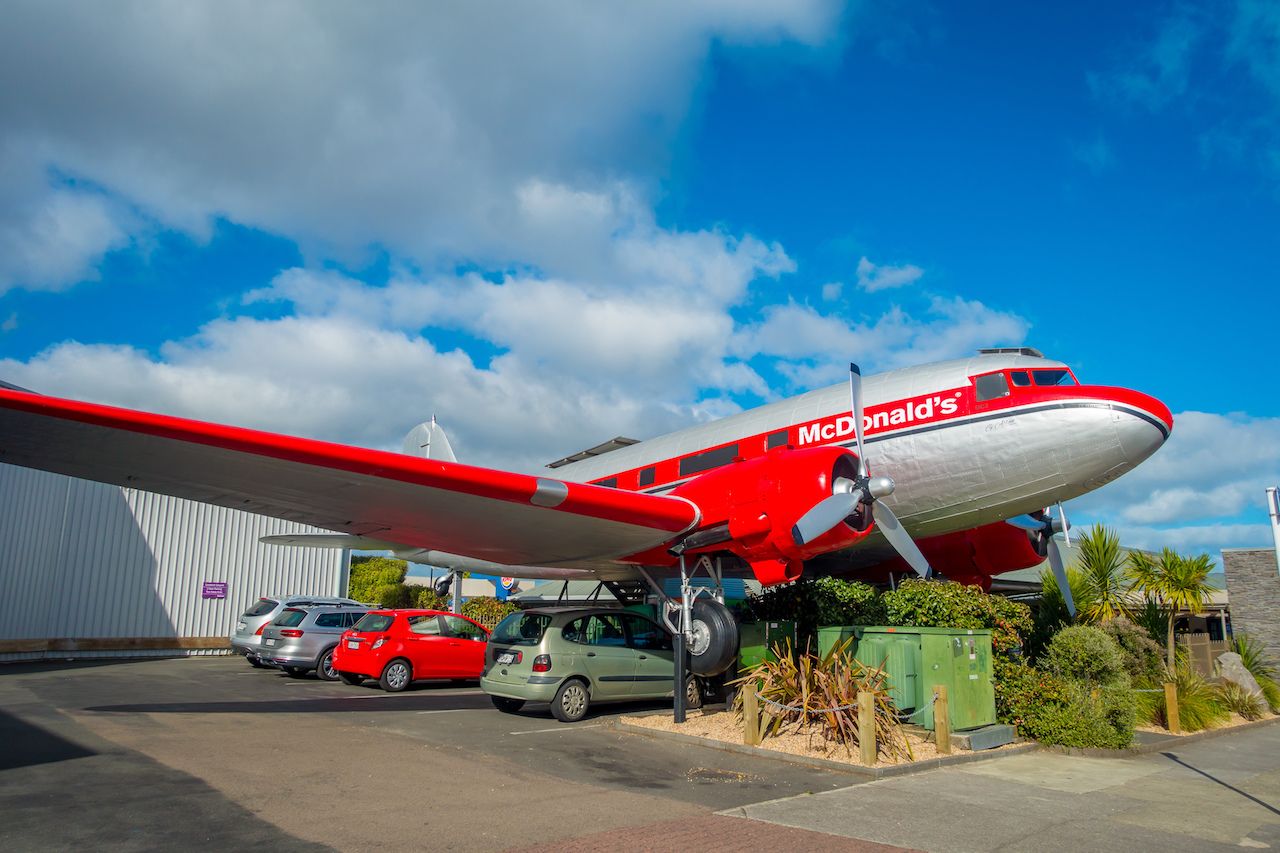 McDonald’s may not be an in-flight meal option, but that won’t stop you from devouring a Quarter Pounder and fries aboard an aircraft in Taupo, New Zealand. Originally operated by South Pacific Airlines, this decommissioned Douglas DC3 plane was converted into a McDonald’s after being purchased with a plot of land in 1990. The propellers are still fully functional, but the cabin now serves as a 20-seat dining room where patrons can enjoy their Mickey D’s just feet away from the perfectly intact cockpit. 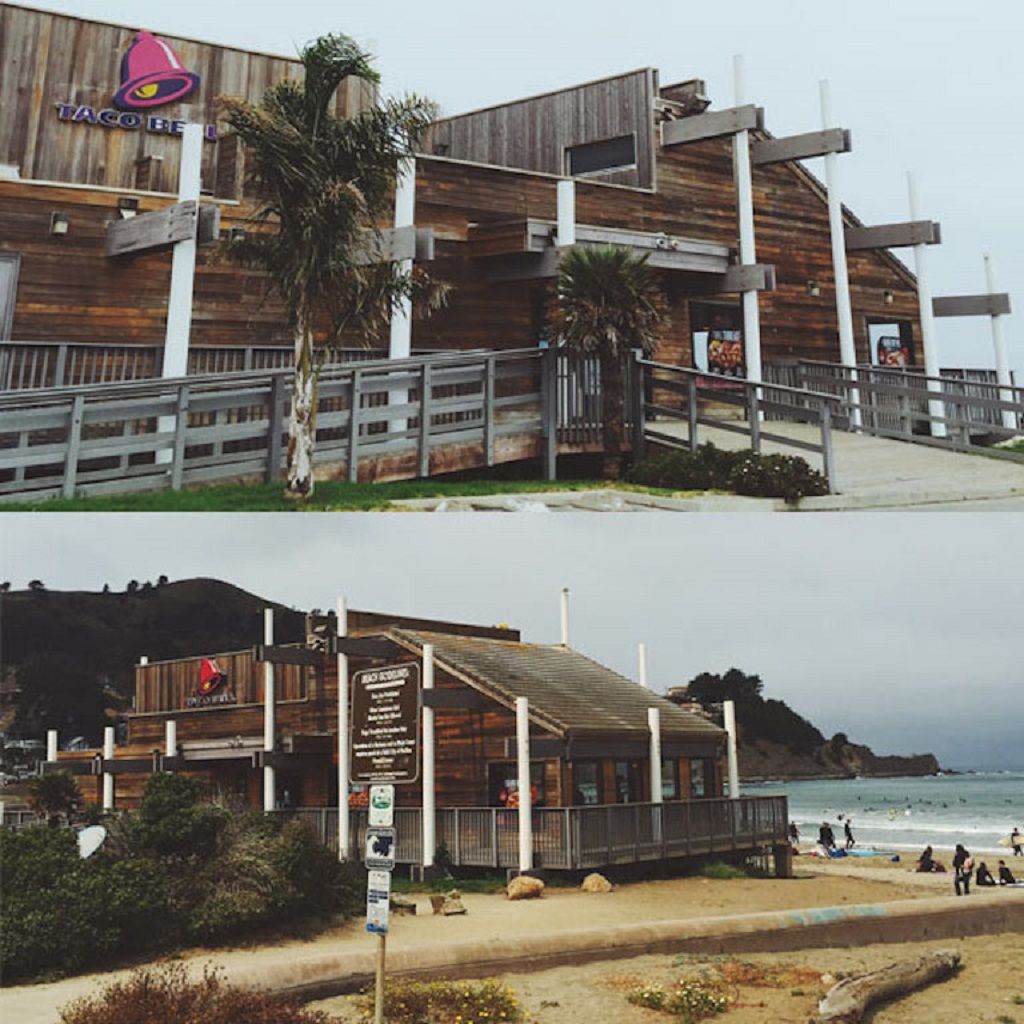 Forget packing a picnic when you visit Pacifica State Beach just south of San Francisco. Hit up this oceanfront Taco Bell instead. The all-wood establishment gives off cozy cabin vibes, complete with patio dining and a walk-thru window so customers don’t track sand through the restaurant. You’ll find all your favorite Tex-Mex treats and stellar views of the Pacific here, promising a visual feast to accompany your meal after a long day of playing on the beach.

6. The Pizza Hut opposite the Pyramids in Giza, Egypt

Relatively unassuming from the outside, this Pizza Hut lets visitors grab a slice while gazing out at the Sphinx. It’s located above a KFC and is directly across from one of the most historic complexes on the planet, offering better views of the Giza Plateau than its downstairs neighbor. Plus, diners can take it all in away from the regular crowds with the added bonus of air conditioning. There’s probably no better way than to see the pyramids than over a cheesy, stuffed-crust pie.

7. The Starbucks in a 100-year-old townhouse in Kyoto, Japan 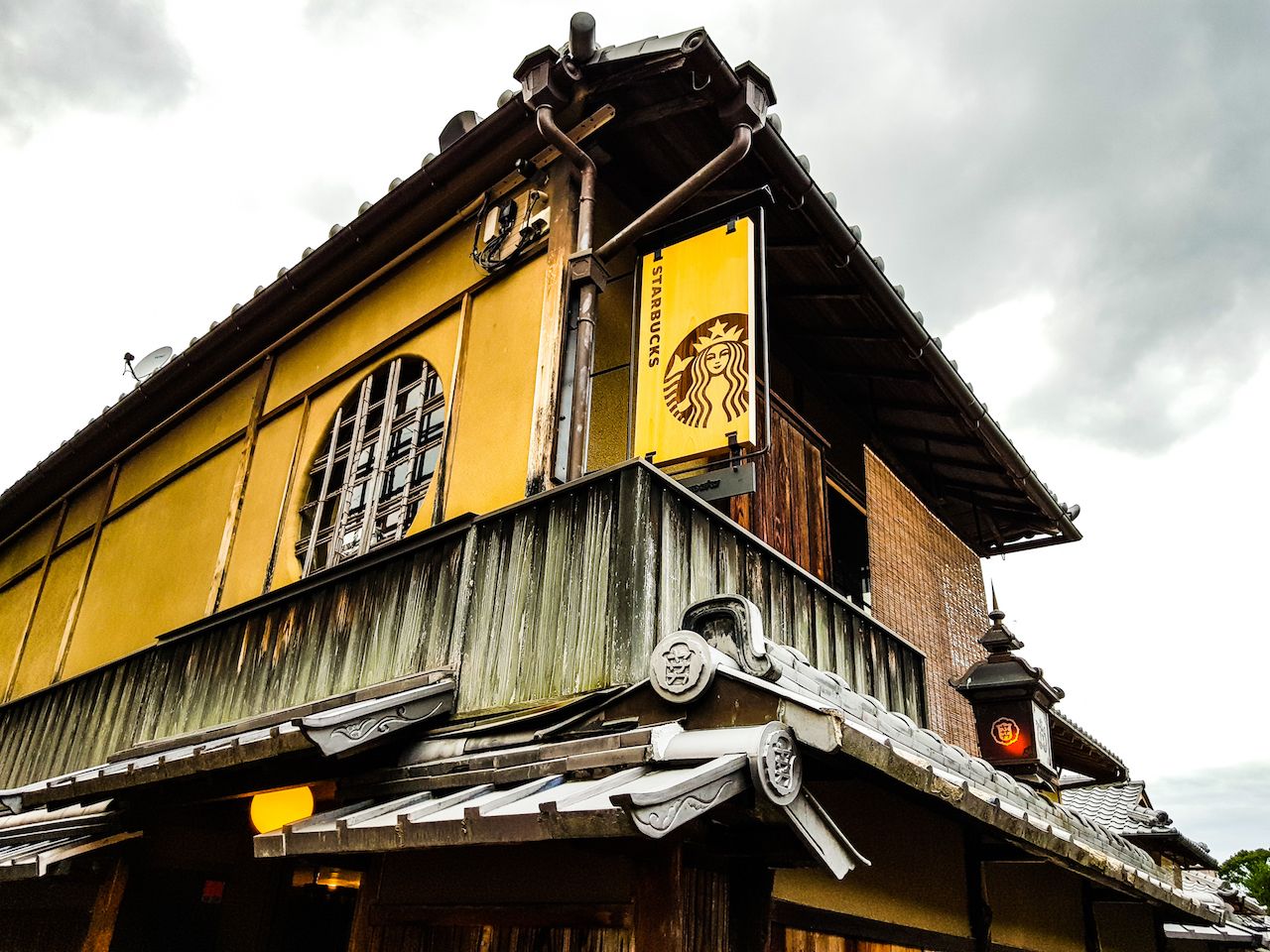 Who says you can’t get a caramel macchiato with a double shot of culture? Inside this Starbucks located within a century-old townhouse in the Higashiyama neighborhood of Kyoto are decor touches like tatami mats and cedar-wood walls, so you can enjoy your regular coffee order without scrimping on an authentic experience. There’s even a Japanese garden outside to keep you calm while getting a much-needed dose of caffeine to sustain your sightseeing.

8. The McUFO in Roswell, New Mexico 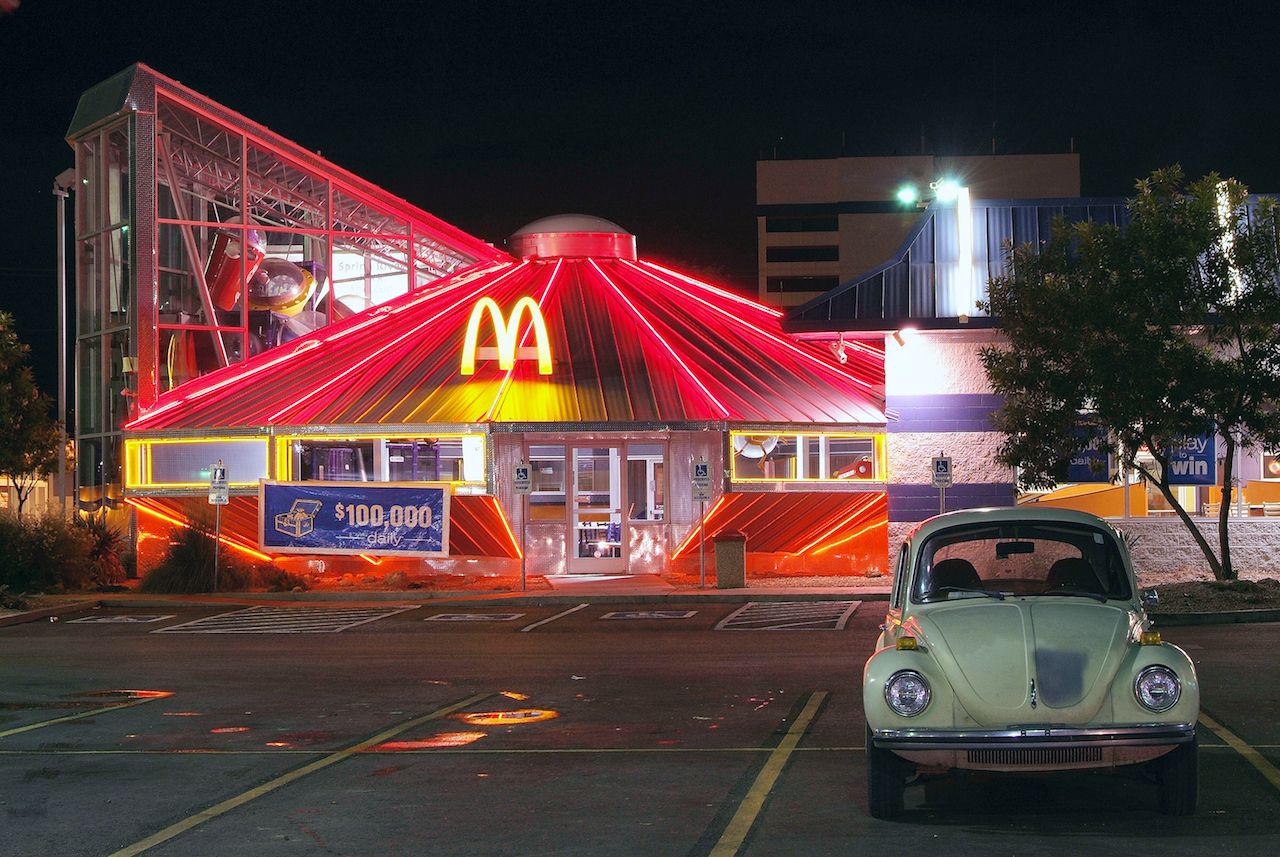 You might not be crazy if you see a flying saucer while passing through Roswell, New Mexico, after all. Capitalizing on the city’s history of extraterrestrial sightings, this McDonald’s was designed to look like a UFO, going so far as to emanate bright neon lights after dark. The space theme extends to the interior, which features a large intergalactic play area for kids.

If it wasn’t for Colonel Sanders looking down at you from the facade of the Sabunchu rail station in Azerbaijan’s capital, you’d never know that the Soviet-era transit hub housed a massive KFC. While the title of largest KFC was usurped by a behemoth in Kiev, Ukraine — and its double-lane drive-thru, which can serve up to 200 cars an hour — this palatial branch still seats 300 and is pretty spectacular with its Moorish-style architecture, befitting a much classier establishment.

Food + DrinkMcDonald’s Is Offering Menu Items From Other Countries. And We Tried Them All.
Tagged
Food + Drink
What did you think of this story?
Meh
Good
Awesome