I’ve been traveling regularly for the past eight years, and never been on a cruise. It was no accident. Either from arrogance or ignorance, I thought I knew exactly who cruising was for: The retired octogenarian looking for an easy, low-excitement vacation surrounded by other octogenarians, and parents with a masochistic urge to be trapped with their kids on a floating hotel for five days. Certainly not my demographic. So when I decided to sail on a Virgin Voyages adult-only cruise from the US, I was breaking character.

Virgin Voyages launched in the UK in August 2021, before moving operations to Miami in October. So far there’s only one ship in the fleet — the Scarlet Lady — which mainly sails four-to-five night itineraries in the Caribbean. Why did I break my no-cruise policy for Virgin? It wasn’t the eye-catching red color scheme or the prospect of catching a glimpse of Richard Branson. It was one very simple (and unique) rule: 18+ only.

Not only is Virgin the newest US cruise line, it’s also the first with an adult-only policy. Though at 31 I barely consider myself an adult, the idea of a kid-free pool deck was enough to pique my interest — not to mention Virgin’s promise of an edgier, more unconventional cruise experience. With some lingering hesitation, I boarded the five-night voyage to Mexico and the Bahamas with the lowest possible expectations.

What is different about Virgin Voyages? 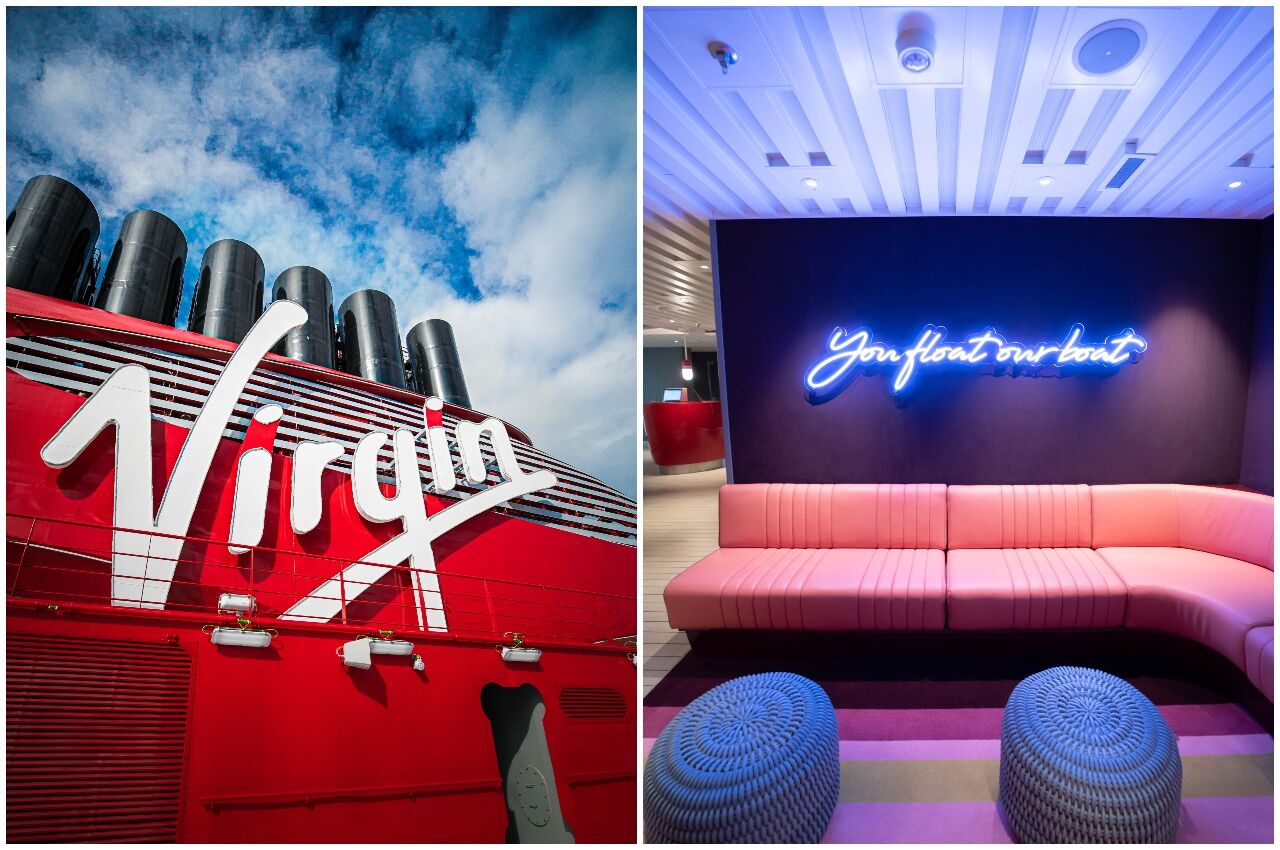 A responsible traveler would probably take it easy the night before embarkation day. Irresponsible travelers might opt to stay up until 6:00 AM hitting various rooftop bars, karaoke joints, and after-hours clubs, and board the ship running on fumes. It is Miami, after all. I wouldn’t dream of advocating one approach over the other, but the InterContinental Miami is located just five minutes from the cruise terminal, and a 15-minute walk to every nightlife black hole you could possibly want. But you didn’t hear it from me.

My preconceptions about cruises didn’t end at demographics. In my head, they were a cross between a summer camp and a bar mitzvah party — defined by lame community bonding activities and costumed cast members forcing the introverts to get up and dance. Chugging a Pedialyte before boarding, I vowed not to succumb to the lameness.

My first hint that Virgin Voyages didn’t conform to my preconceptions came on the first night: Super Bowl Sunday. The game was being shown in the Manor, a lavish onboard nightclub, across three huge TV screens. Toward the end of the game, I noticed, in a dark corner, two off-duty Virgin employees making out on a plush sofa.

“Huh,” I thought. “They either had a lot of money on the Rams, or this ship is really casual.”

It was a small observation, but it actually put me at ease right away. It dispelled my fear of the overbearing Disneyland-esque attitude I expected from staff and immediately made me view the crew members as people (and fun people, too) rather than robotic hospitality bots. Sure enough, I later learned that unlike on many cruise ships, Virgin’s off-duty crew members are allowed to socialize with guests and adopt a more casual approach.

This clandestine makeout session was actually very on-brand for Virgin. They really want you to know that it’s an 18+ experience, and they’re constantly reminding you with puns, innuendos, and quirky amenities. From an ice cream place called “Lick Me Till Ice Cream,” to the “Never Sleep Alone” theatrical production, R-rated themes are everywhere. There’s even a special “Let’s Get It On” mood lighting option in the cabins, designed for amorous couples. 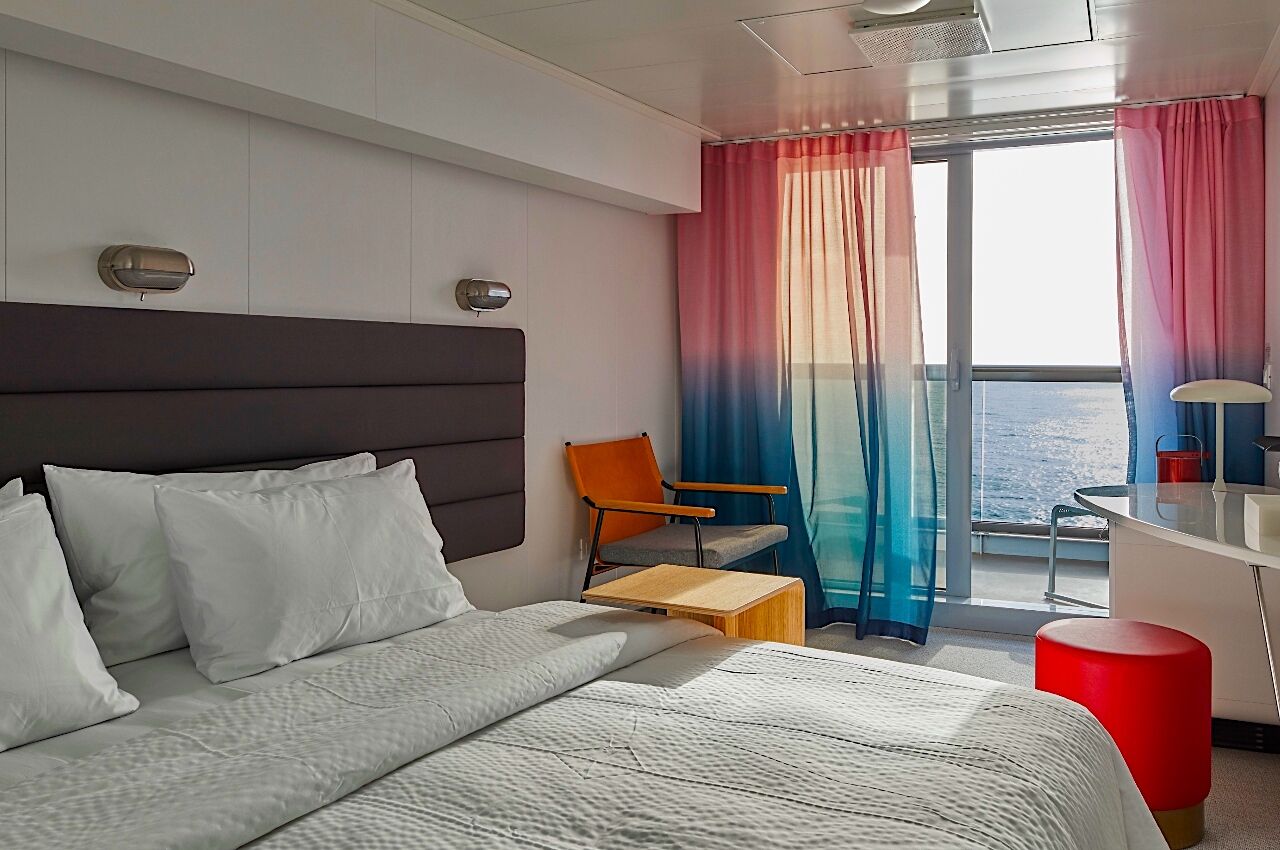 Because they’re not catering to children, the ship vibe feels almost like an extended bachelor or bachelorette party. The pool deck on any given sea day (a day spent on the water) is almost reminiscent of a Las Vegas daytime pool club — though the crowd undeniably skews older. Pop music bumps loudly from the ship speaker, and it wasn’t uncommon to see passengers of all ages spontaneously rise from their loungers to shred the makeshift dance floor…at 2:00 PM. If you need some encouragement, crew dancers regularly step up to the pool for seemingly impromptu flash mob routines. You can dance with them, simply enjoy from afar, or completely ignore it and continue sunbathing.

Thinking I was too cool, or something, I held myself back from dancing on the pool deck. I had vowed to avoid anything lame, after all. Well, that promise didn’t make it very far. Scantily-clad face paint artists were another of Virgin’s adult-themed entertainment offerings, and when they appeared at an event the first night I told myself: “Absolutely not.” But after two drinks and a little peer pressure, I was soon the proud owner of a Mike Tyson face tattoo. 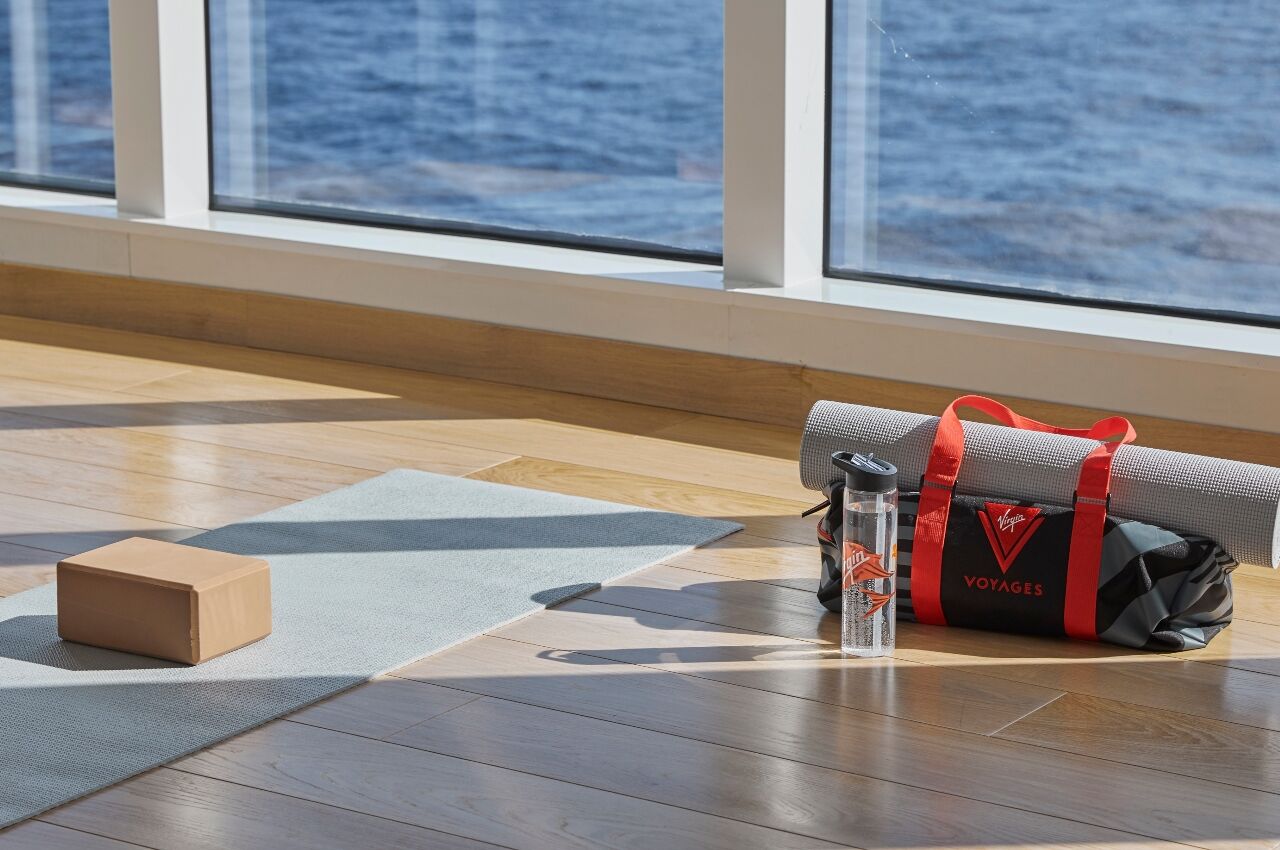 Speaking of lame, that’s the first word that came to mind when I heard about Virgin’s wellness-oriented experiences. People go on cruises to overeat, drink excessively, and burn their faces off, not wake up at 8:30 AM for a yoga class. Or so I thought.

Wellness is a huge part of the Virgin Voyages experience, from the well-equipped gym and daily fitness classes to the boxing ring, punching bags, outdoor workout stations, and running track that wraps around the ship. 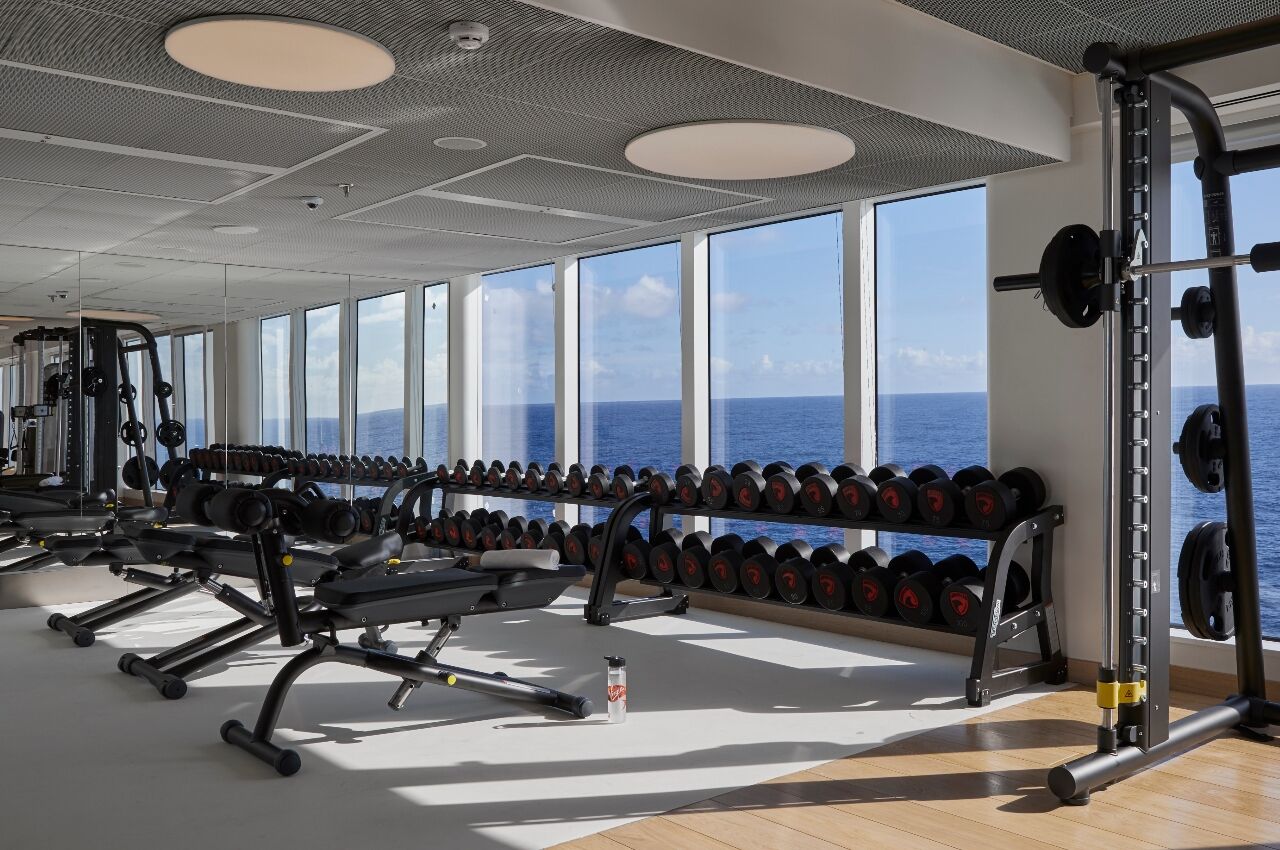 I work out regularly at home but have never used a hotel gym in my entire life. It stems from a difficulty reconciling my vacation mindset with healthy personal habits. Virgin normalizes this reconciliation, essentially telling passengers, “Look, if you want to work out or wake up early for a HIIT class, that’s okay. You’re not wasting your vacation.”

And it makes total sense. A fitness class or a solid gym sesh can make you feel a lot less guilty about gorging yourself at “Lick Me Till Ice Cream.” I’m not ashamed to admit that I used the gym regularly during my voyage, and that continuation of my normal route absolutely helped my body cope with the cruise’s reckless caloric intake.

Of course, “wellness” doesn’t always mean physical exertion. The world-class Redemption Spa offers private treatments, as well as a steam room, sauna, mud room, salt therapy room, and dipping pools in a range of temperatures. I still don’t quite get how mud baths work, but there’s nothing like kicking back in a hot tub looking through a porthole at the Caribbean waves. 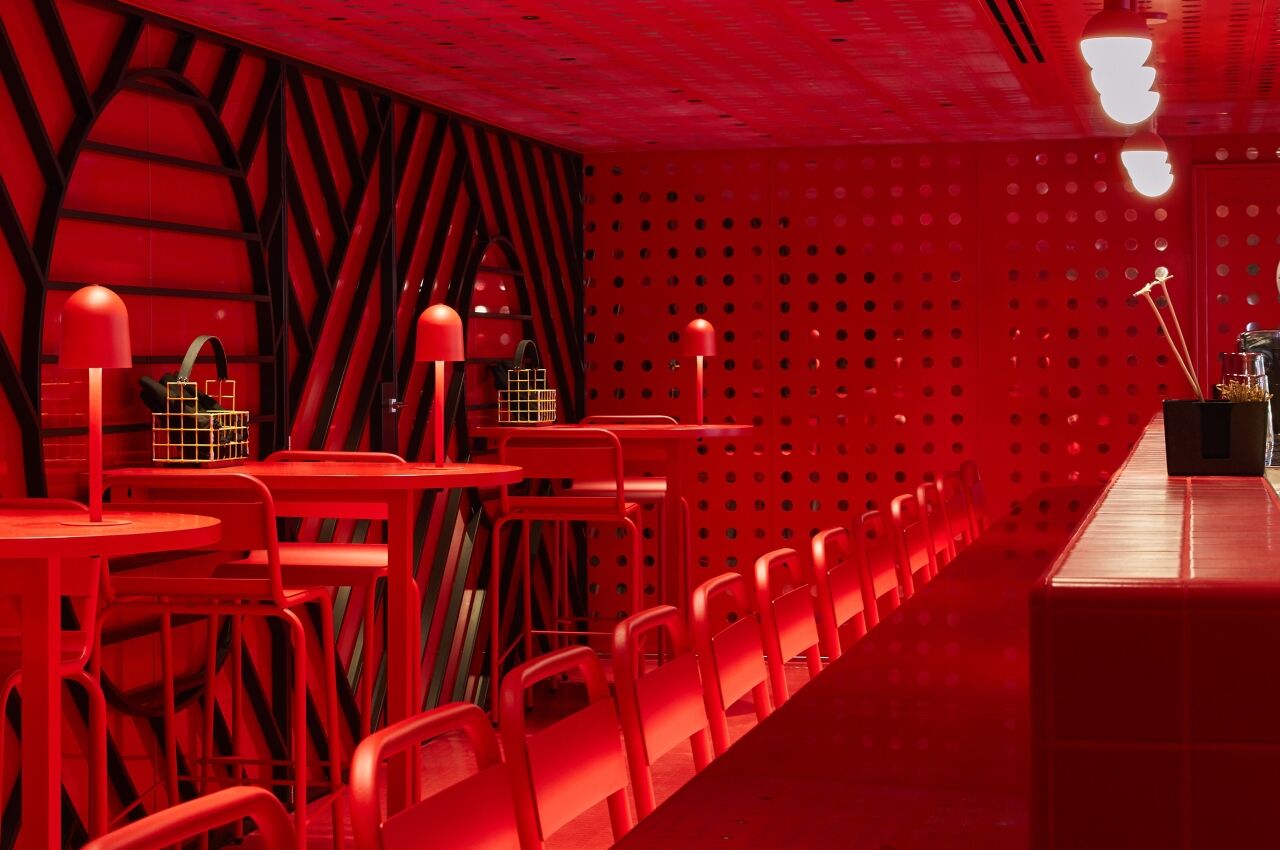 Perhaps the biggest way Virgin Voyages differs from classic cruises is in the restaurant experience. The fancy, formal, Titanic-esque dining room has been replaced by a variety of themed eateries, and instead of endless buffets, you’ll find The Galley — a casual sit-down restaurant that has a little bit of everything. Don’t worry, though. There are still plenty of opportunities to indulge.

The themed restaurants are the centerpiece of Virgin’s dining culture, each with its own unique cuisine and aesthetic. It’s kind of like going to the fine dining version of the Epcot World Showcase. There’s The Wake, an upscale steak and seafood restaurant; Pink Agave, an elevated take on Mexican cuisine in a chic, LA-style setting; Razzle Dazzle, a vegetarian-centric dinner and breakfast spot with a 50s-style decor; and Extra Virgin, the indulgent, calorie-dense Italian spot you were praying would be on this list. 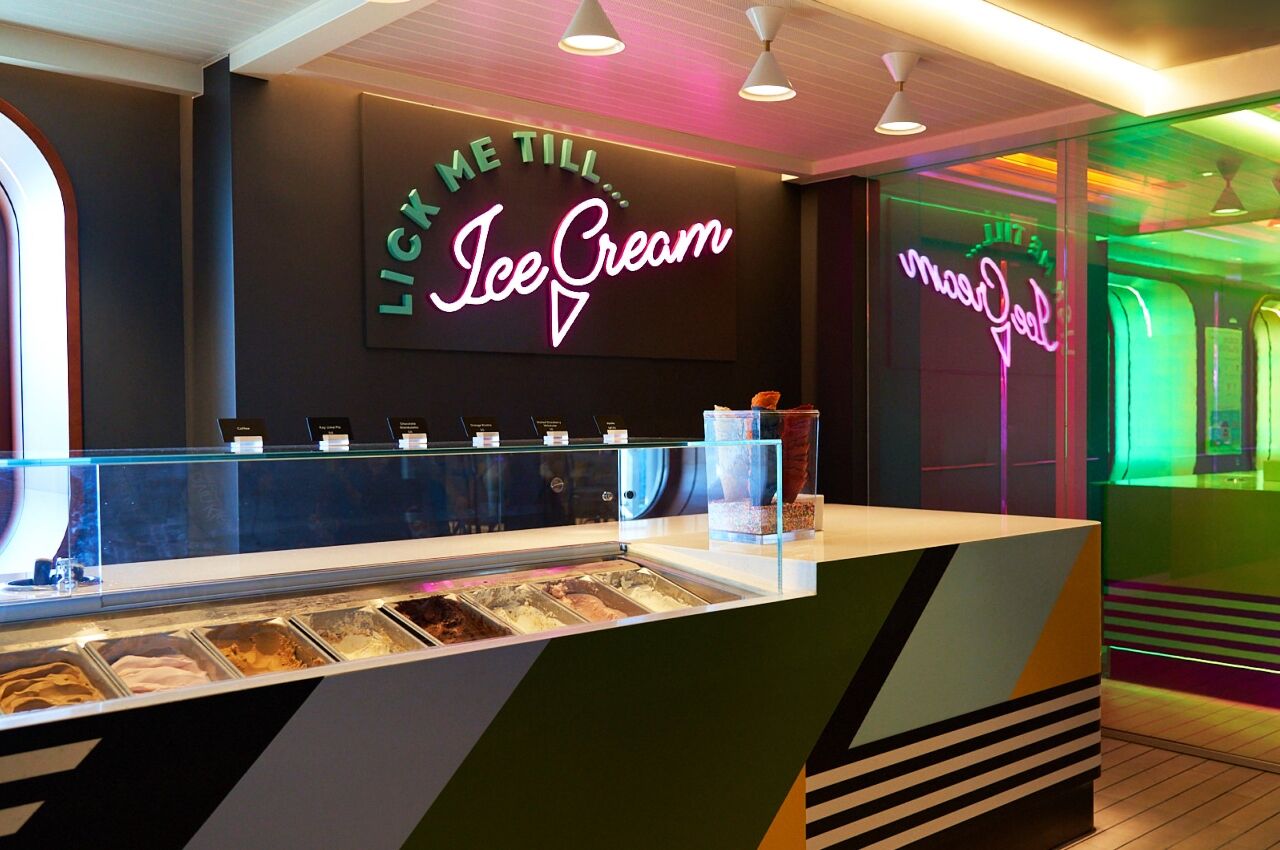 The two most unique eateries, however, are Test Kitchen and Gunbae. Test Kitchen is billed as an experimental restaurant, which also hosts cooking classes. Their ever-evolving tasting menus are six-course meals of small, creative plates that’ll make you go “uhh, what is this?” When you try it, however, you’ll wish the portions were three times bigger. Our first course, for example, was mushroom paste in the shape of a small mushroom, while the fifth course was a stick of gourmet blue cheese shaped like a curled-up slinky.

One of Virgin’s main goals is clearly to encourage socialization among complete strangers, and nowhere is that mission more obvious than at Gunbae. A Korean BBQ defined by its communal seating and drinking games, Gunbae is definitely the party restaurant. You’ll be seated at a large circular booth with another random group and a bottle of soju — a Korean variation of vodka. The server will then explain the rules of a few drinking games, the losers of which must take shots.

“You see that ‘Get It On’ lighting in the cabins?” asked the woman paired with me at my table (her partner, Sid, looked uncomfortable). “Sure puts you in the mood, doesn’t it? Oh, don’t be shy, Sid.”

She then launched into a rendition of “Sit Down, You’re Rockin’ the Boat” from Guys and Dolls, while Sid looked down with abject humiliation. I had only met this woman a half-hour ago, but the soju had already worked its magic.

The next two hours are a blur of shot taking and inhibition loosening, as a parade of Korean delicacies fill your table. From beef short ribs and pork belly to octopus and squid, your server will cook the raw meat in front of you at your table’s personal BBQ. And until you tap out, the food just keeps on coming. You’ll leave Gunbae with a full stomach, healthy buzz, and if you’re lucky, some new friends. 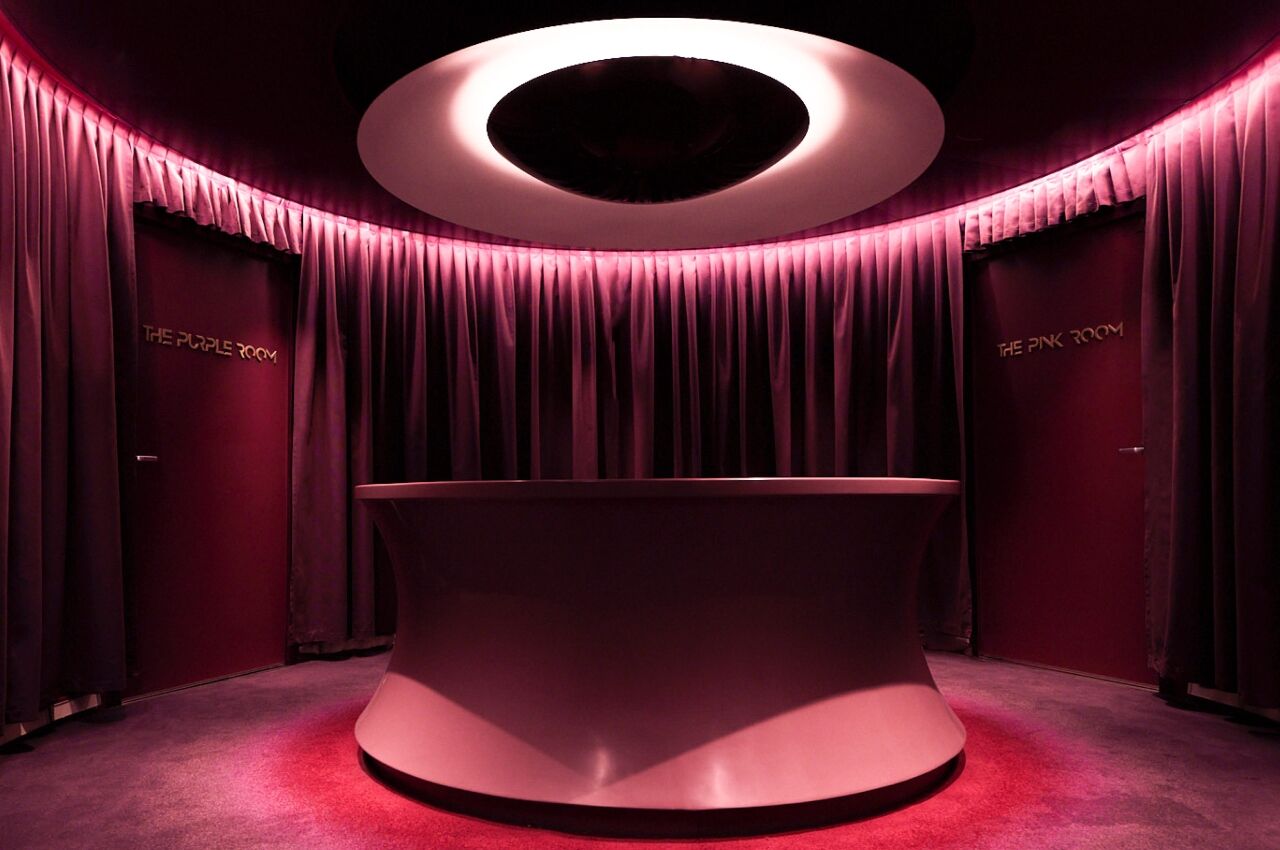 “Hey, which night is the magic show?” I off-handedly asked the customer service desk my first day aboard.

They looked at me quizzically and informed me that Virgin Voyages doesn’t have a magic show. I didn’t know much about cruises, but I thought I knew one thing: there’s always a magic show. Turns out, instead of the classic magic shows, comedy acts, broadway-esque plays, and ice skating performances, Virgin offers a range of live acts that not only push conventional boundaries but also break the fourth wall in a miraculously not-lame way.

Audience participation is probably my biggest, most irrational fear. Nightmares about getting pulled up onstage by an elaborately costumed character make me wake up in a cold sweat. That’s why the Untitled Danceshow Partything — one of Virgin’s signature “interactive” shows — was more nerve-wracking to me than my “swimming with the stingrays” excursion in the Bahamas. It’s basically a music video that spills over into the audience, and before you know it, you’re pretty much at a music festival. The immersion happens so gradually that you’ll hardly notice the shift take place. One minute you’ll be reservedly bobbing your head to the music, and the next you’ll be shredding the dance floor to T-Pain.

Never Sleep Alone is another interactive show, and this one’s not for the faint of heart. A few lucky (or ill-fated) audience members will get called up on stage to participate in a raunchy version of the Dating Game. In addition to answering sexually-charged questions, you can also expect to engage in some pretty suggestive behavior. I won’t spoil it, but let’s just say bananas and grapefruits are involved. If you’re an extrovert and go on stage, you’ll have the time of your life. If you’re an introvert and remain in the audience, you’ll be wildly entertained.

There are several other shows, like Duel Reality — a West Side Story-esque performance that’s part dance battle and part death-defying acrobatics — and smaller scale Phantom Folktales, pop-up micro-plays that appear spontaneously throughout the ship. Fans of classic cruise entertainment will be surprised, confused, entertained, and scandalized by Virgin’s offerings — and that’s a good thing.

CruisesEverything You Need To Know About Navigating COVID-19 on Cruise Ships
Tagged
Cruises
What did you think of this story?
Meh
Good
Awesome

CDC Says It’s Now Safe To Cruise. Here’s How To Find Where Your Ship Ranks on COVID Protocols.