Still in the middle of the coronavirus pandemic, we find ourselves looking for a light at the end of the tunnel. New data from the Transport Security Administration (TSA) may be just that.

No one expects flight sales to start booming any time soon, but recent TSA data shows that the number of passengers in airports is trending upward. To optimistic travelers, that suggests the light might be closer than we thought.

According to TSA’s screening records, the week ending on May 3 saw the most people pass through TSA screenings since March. Although the numbers also include crew members and other airport personnel, TSA screened 981,000 people at airport checkpoints last week, up 27 percent from the previous week and 43 percent from the week ending on April 18. The busiest travel day was May 3, with 170,254 people screened; it was also the biggest day for airport traffic since March 29. 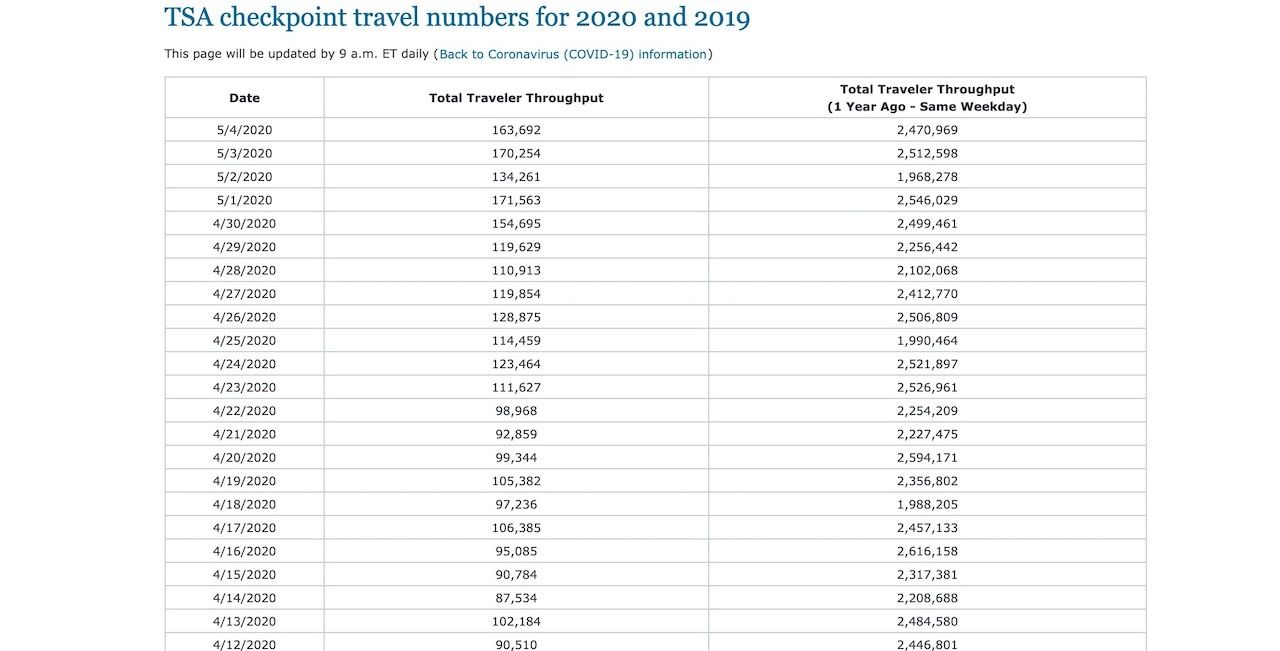 TSA spokesperson Lorie Dankers told FOX Business, “Regarding the increase in people screened through TSA security checkpoints recently, TSA will let the numbers speak for themselves. TSA has no particular insight as to why there has been an increase.”

Since the State Department issued a Level 4 travel advisory on March 19 — quickly followed by many state-specific stay-at-home policies — air travel has been historically low. While no data is available to explain the sudden spike, it’s reasonable to assume that the controversial lifting of stay-at-home orders in several states, and the partial opening of the economy, is a factor.

Although many airlines have grounded the vast majority of their fleet, others are starting to resume certain routes this month. Among this month’s resumptions are Hawaiian Airlines’ flights to Seattle, and American Airlines’ international routes from Miami to Lima, Quito, Guyaquil, Santiago, and São Paulo, as well as Dallas to Madrid. In June, American is conservatively hoping to reintroduce routes from Chicago to Athens, London, and Dublin; Dallas to Amsterdam, Bogota, and Frankfurt; and Los Angeles to London.

Similarly, United Airlines plans to revive seven routes in June, including Newark to Paris, Shanghai, and Tokyo, and San Francisco to Beijing, Chengdu, Shanghai, and Frankfurt.

NewsCarnival Cruise Line set to resume operations on August 1
Tagged
News Airports + Flying
What did you think of this story?
Meh
Good
Awesome

Omicron canceled thousands of flights. These airports were hit hardest.

Watch: This is how your checked luggage is stored underneath a plane