Some people judge staying at an airport hotel abroad similar to how they judge eating at a McDonald’s abroad. There’s a stigma that airport hotels have only the most basic essentials, lack character, and can’t possibly offer the same kind of cultural immersion you’d find in the city center — though the same can be said for many of the big chains in any city’s downtown that are just cookie-cutter clones of each other, anyway. Yet the desire for airport hotels to cater to discerning business travelers means that the accommodations are actually some of the coolest in the world. From New York City to Bahrain, these are some airport hotels where you won’t mind spending your long layover. 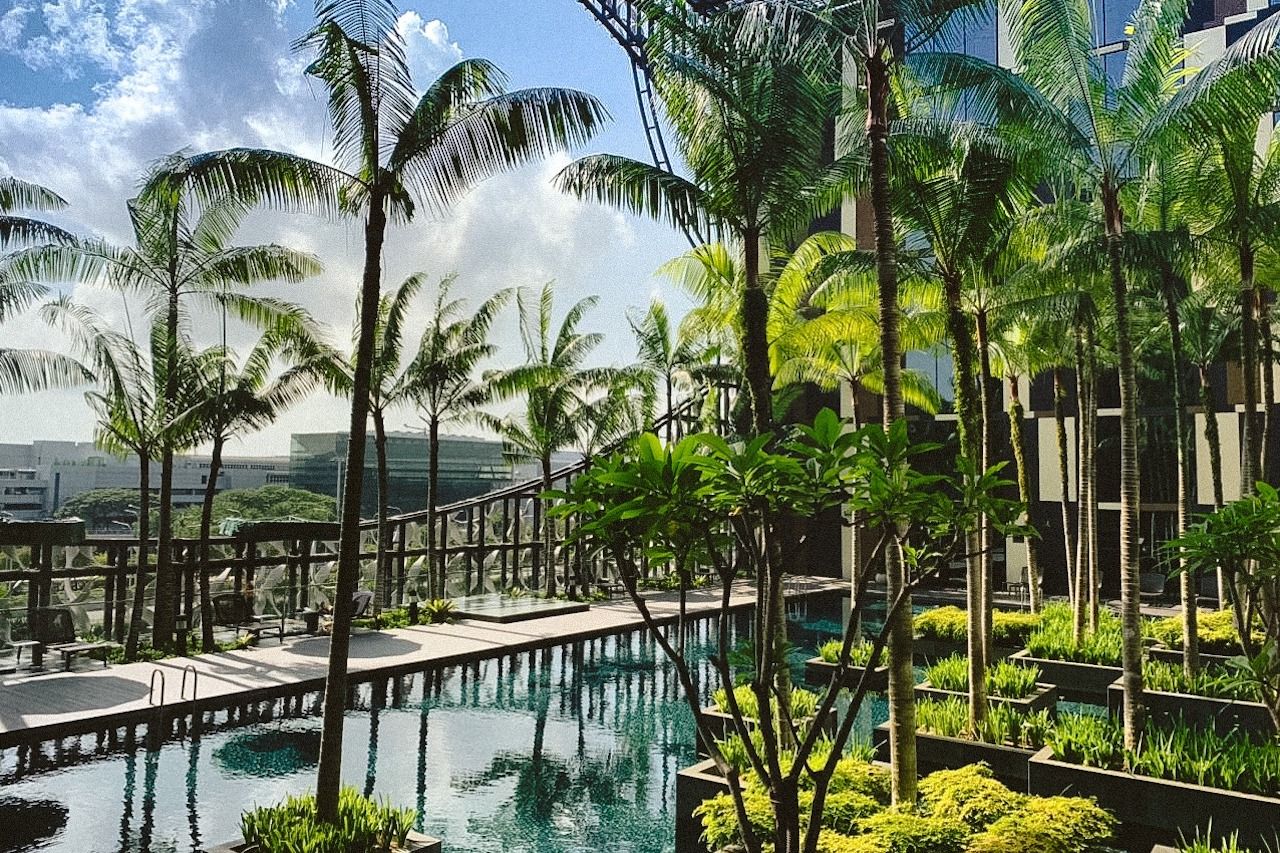 Singapore’s Changi Airport is internationally renowned for being one of the most technologically advanced and stylistically cutting-edge airports in the world. That flair extends to the airport’s Crowne Plaza hotel as well. Connected to all terminals of Changi Airport, the Crowne Plaza isn’t just incredibly convenient, but also aesthetically mind blowing. The landscaping alone will make you feel like you’re in a far off getaway instead of right next to the runway, and the nature-inspired rooms can transport you far away from the airport bustle. Apart from its relaxing aesthetic, the hotel also offers a club lounge, fitness center, fine dining at a Cantonese restaurant, pool, and spa. 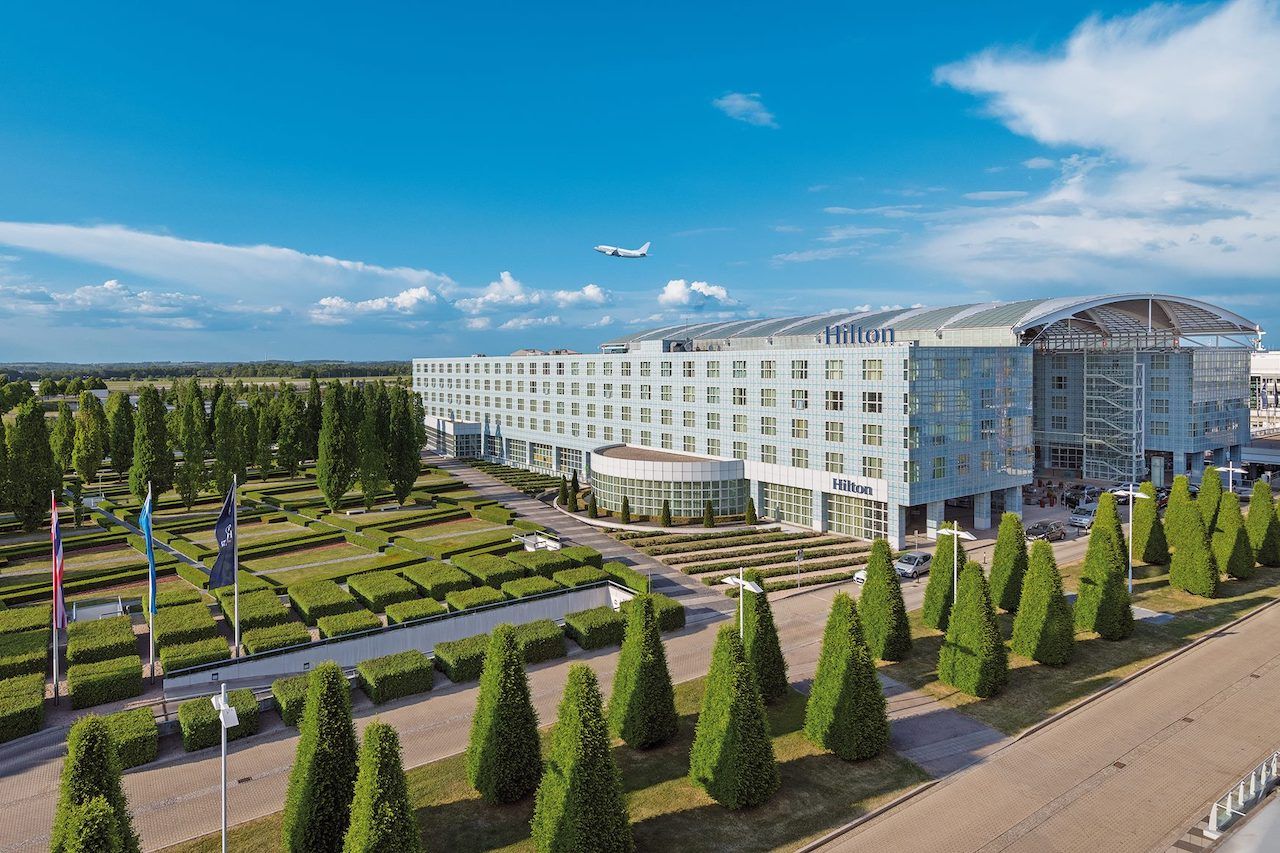 The Hilton at Munich Airport has all the amenities of an all-inclusive resort. Located within walking distance of Terminal 1 and 2, the hotel has a spa, heated indoor pool, the alpine-inspired Mountain Hub restaurant, and upscale cocktails at the Nightflight Bar. You won’t have to worry about being bothered by the air traffic outside either — in addition to soundproof windows with blackout curtains, the rooms also have courtyard, atrium, or garden views. 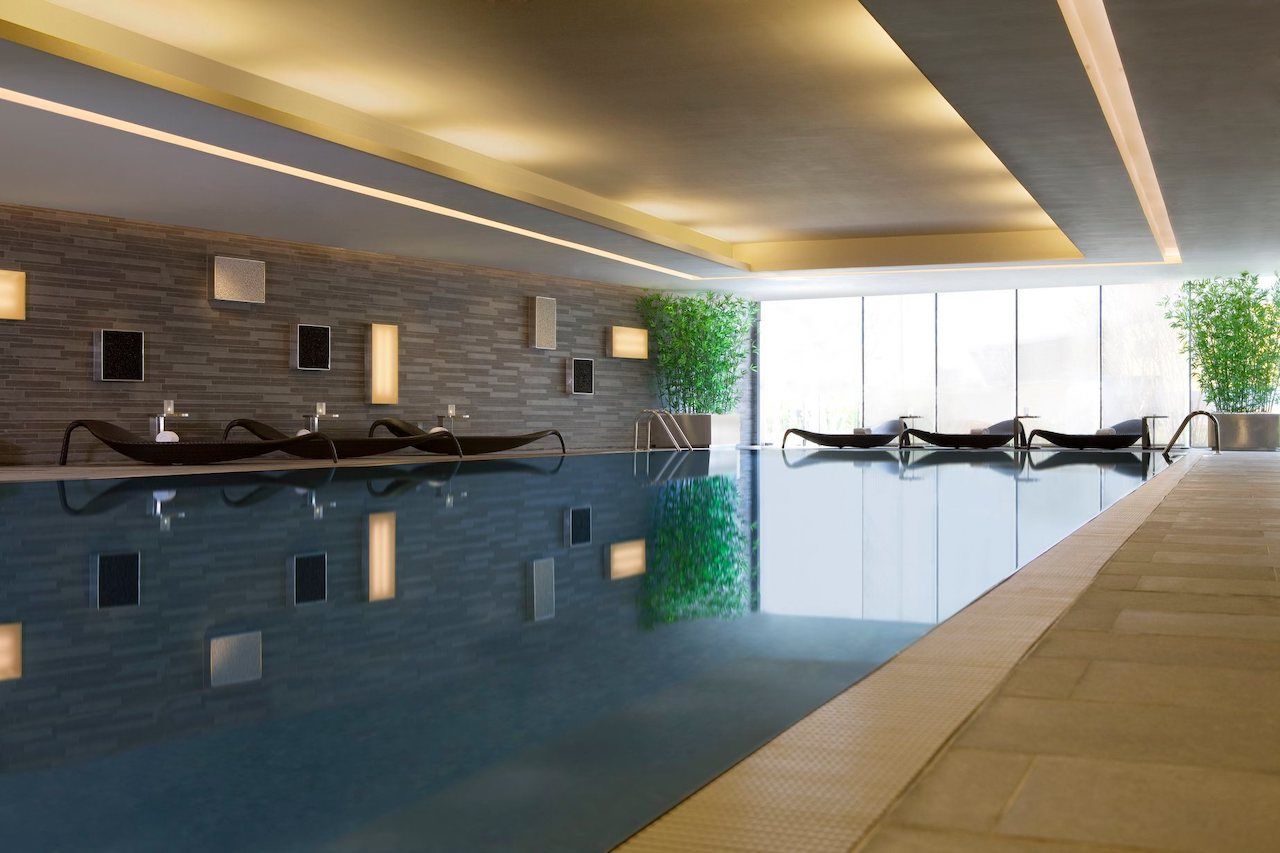 The Hong Kong SkyCity Marriott has pretty much everything you could possibly want in a hotel. If it wasn’t three minutes from the airport, you’d think it was a spa retreat somewhere in the city center. The property has an indoor heated pool, 24-hour gym, and five on-site restaurants. From watching sports at Velocity Bar & Grill to taking afternoon tea at The Lounge, there’s a dining venue for every taste. Perhaps most welcome for long-haul travelers, however, is the Quan Spa, which offers facials, body scrubs, and massages. 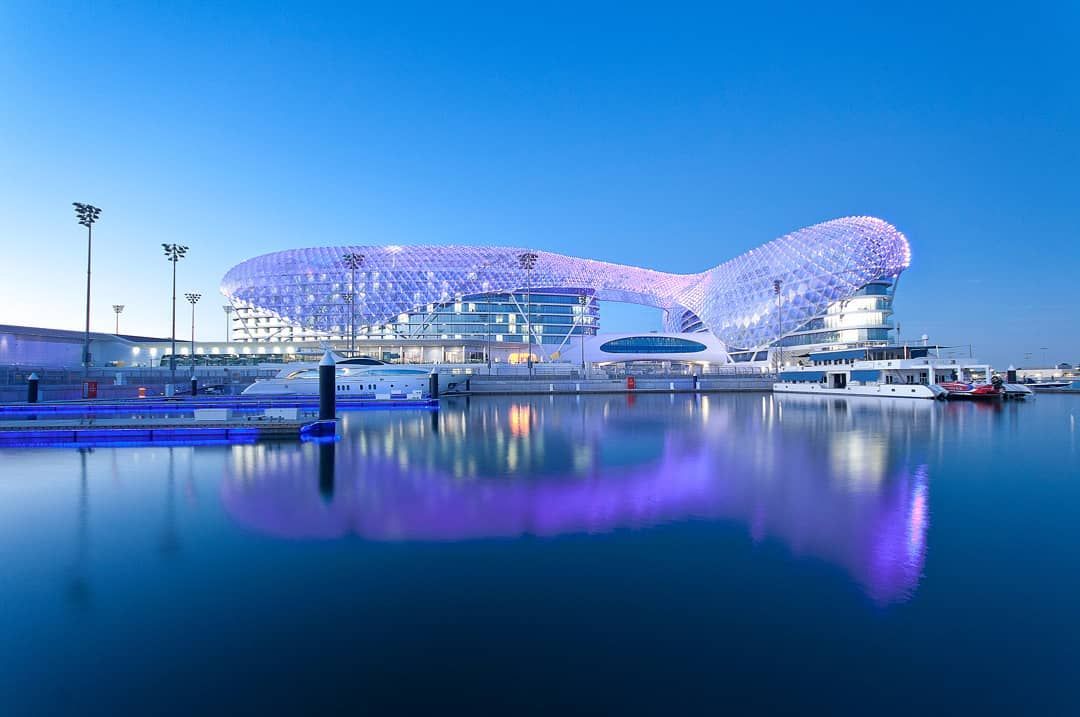 Dubai may be most known for its opulence in the region, but when it comes to airport hotels, Abu Dhabi edges out its neighbor. While slightly farther from the airport than some of the others on this list at 10 minutes away from Abu Dhabi International Airport, the W Abu Dhabi is close enough to deserve a mention here. Just note it can sometimes look more like a nightlife complex than a traditional hotel. Home to several bars and restaurants, including a rooftop terrace with a pool bar and resident DJ, this hotel makes it easy to party in Abu Dhabi without venturing too far from the airport. The W is also located on a Formula 1 racetrack, and the rooms have floor-to-ceiling windows with views of either the track or the nearby marina. 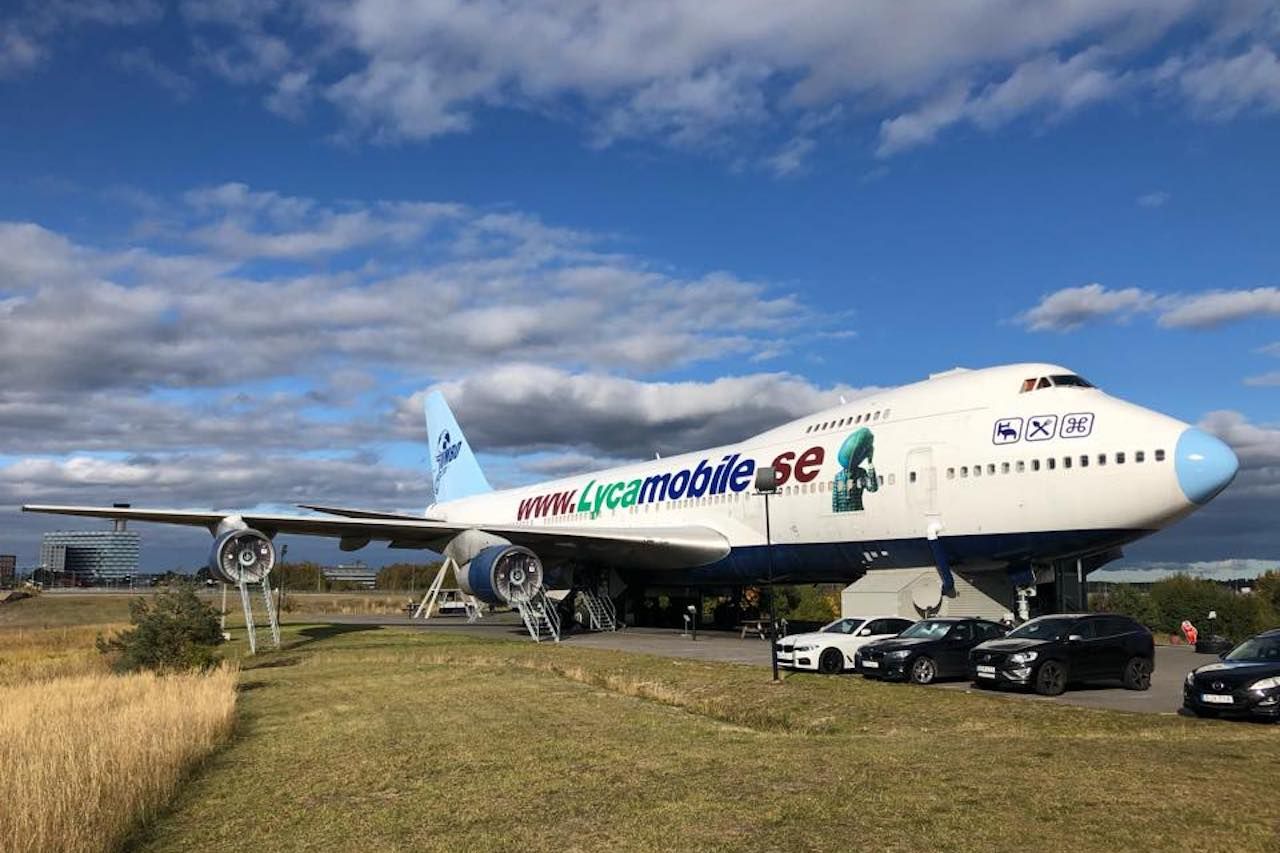 Jumbo Stay takes the “airport hotel” moniker a little too seriously. This five-star hotel is located inside a Boeing 747 Jumbojet directly adjacent to Stockholm’s Arlanda Airport. There are 33 rooms, including a cockpit and blackbox suite, and a room located inside the engine room. There’s also a cafe that resembles an airport lounge. To take the theme even further, hotel staff wear cabin crew uniforms and amenity kits include luggage straps inscribed with the hotel’s logo.

Another aviation-themed airport hotel, JFK’s TWA Hotel is inspired by the golden age of air travel. Located in the same building that housed the Trans World Airlines terminal back in 1962, the hotel is like a trip back in time with a distinctly vintage feel (but modern amenities). The hotel’s restaurants and bars are unlike any other, with the Connie Cocktail Lounge housed inside an old Lockheed Constellation airplane from 1958, and a retro food hall in the same space TWA travelers used to check in for their flights. Perhaps most exciting about this hotel, however, is the rooftop infinity pool and bar, where you can watch planes take off and land on one of JFK’s busiest runways. 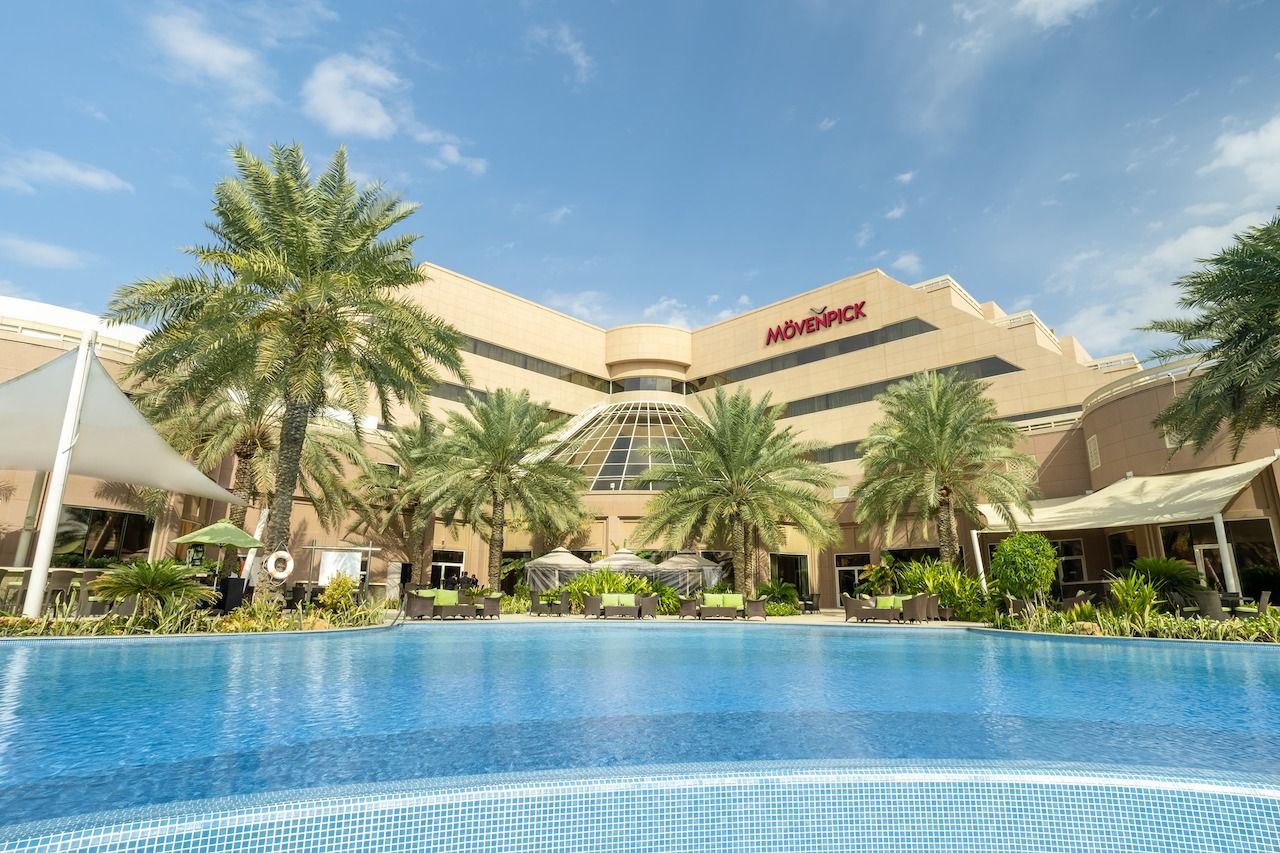 At first glance, the Mövenpick Hotel in Manama, Bahrain, looks like a Caribbean resort. Across from the Bahrain International Airport and just 10 minutes from the city center of Manama, the hotel is situated right on the edge of a lagoon lined with lounge chairs and umbrellas. It has its own beachfront and is surrounded by gardens, creating an off-the-grid beach vacation feeling. The hotel is also home to the European Rimal spa with 12 different treatment rooms, and the five-star Xenia bar and lounge with cocktails and live entertainment.

These Airlines’ Luxe Gifts for First-Class Passengers Are Out of This World
The Most Comfortable Way To Travel? A Private Charter Through the Biggest US Airlines