When it comes to boast-worthy scenery, it seems hard to compete with Norway. And it’s true that Norway gave us the word “fjord” and has more of the stunning inlets flanked by towering mountains and cliffs than anywhere else in the world. But travelers may be surprised to learn that the US has more than a few of the topographical treasures within the US’s borders — the northern ones, at least.

Kenai Fjords National Park is one of the most beautiful and geographically unique national parks in Alaska. It might seem like it’s quite the effort to reach the park, but it’s an easy day trip from Anchorage, the state’s largest city. The park is basically a US version of an Arctic landscape, with glaciers, icefields, wildlife like seals and bears, and plenty of opportunity for adventure on the water.

Alaska might not be in your backyard, but it’s certainly closer than Norway. Here’s how to get the most out of a trip to Alaska’s Kenai Fjords.

What to do in Kenai Fjords National Park 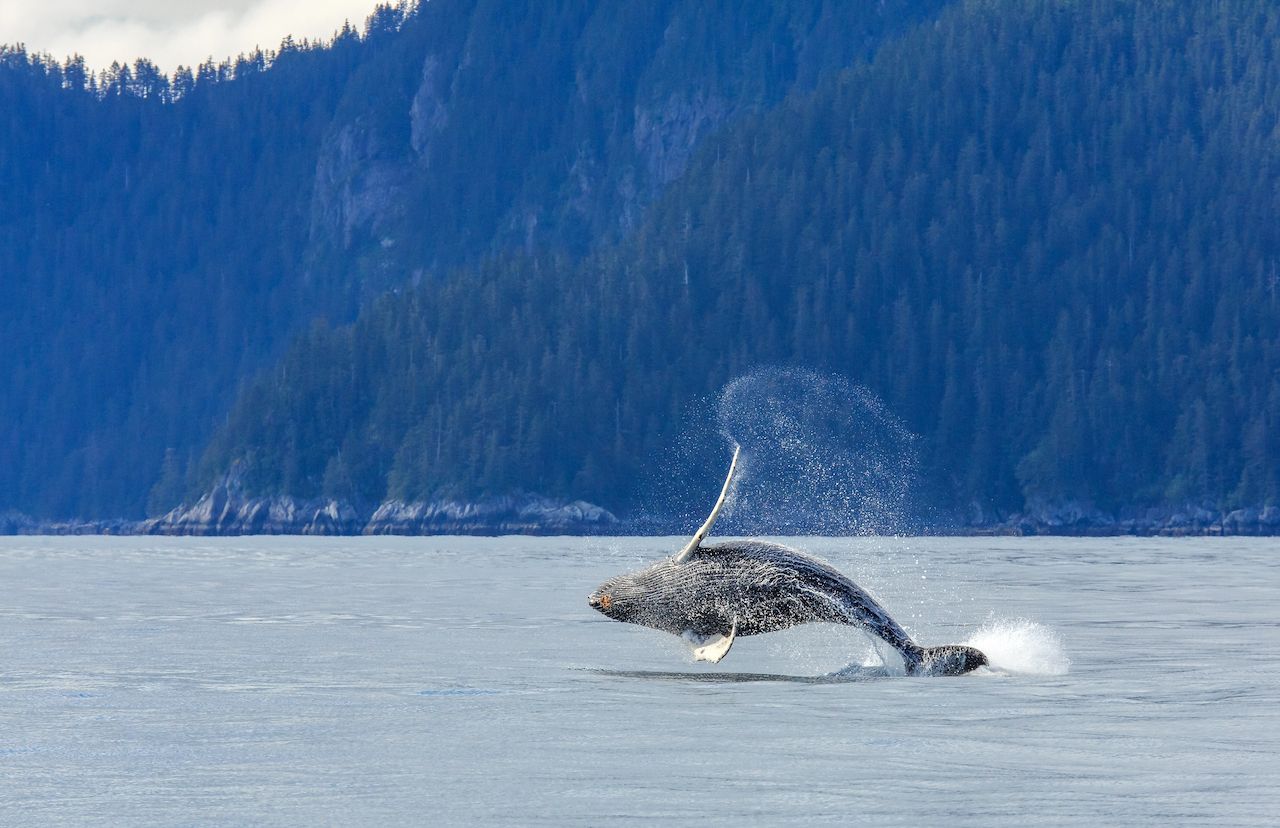 You know that motivational poster of the brown bear catching a salmon in a raging river? That might as well be the welcome sign for Kenai Fjords. The area is famous for its wildlife, particularly black and brown bears, sea otters, whales, and birds. Bear sightings are most common around the park’s coastlines where they’re hunting for fish, and birds like bald eagles, peregrine falcons, and puffins could be spotted nearly anywhere in the park.

From the water, visitors have a good chance of seeing sea otters and sea lions, sometimes in the accessible Seward Harbor. And there are lots of opportunities for seeing whale species like orcas, fin, gray, humpback, minke, and sei, all of which migrate through or live in the park’s waters. 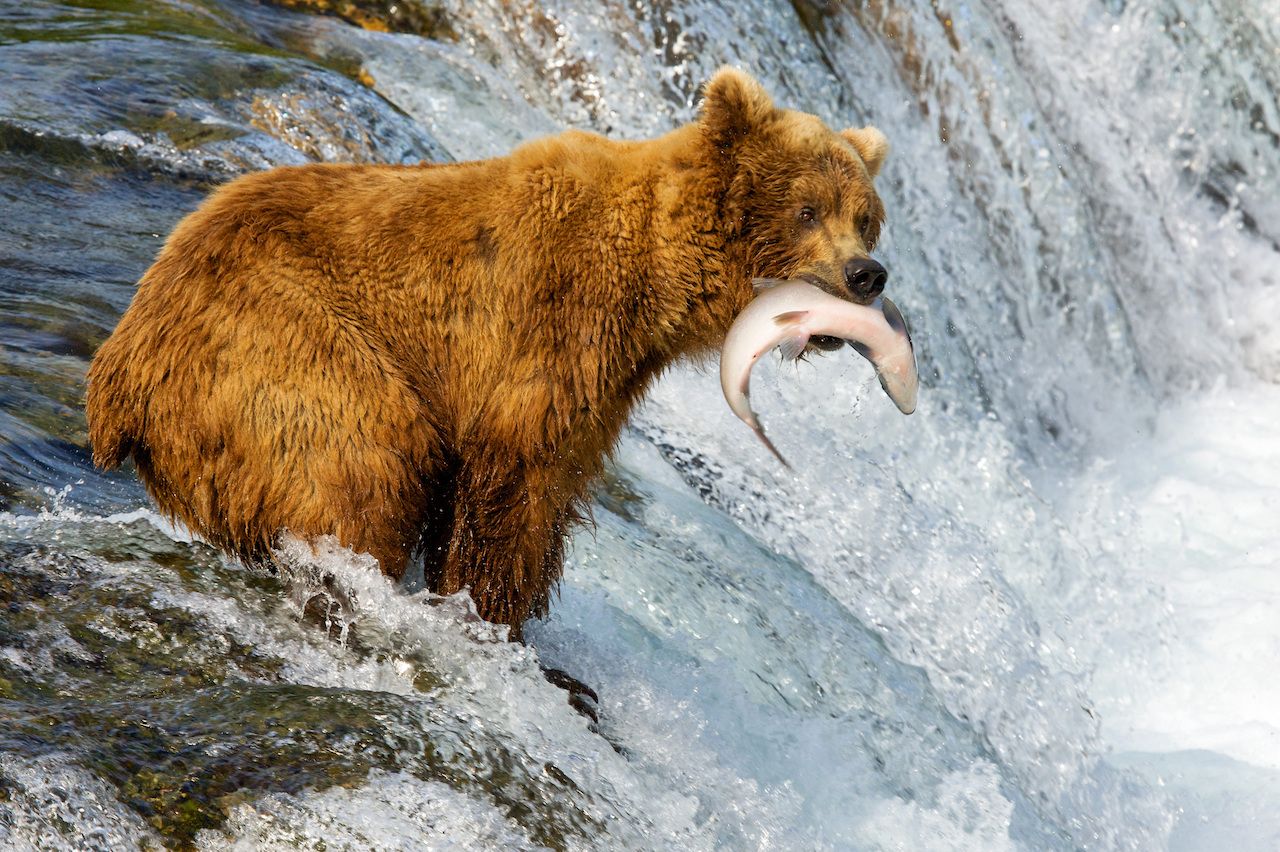 The best way to see the most wildlife in Kenai Fjords is by boat. Sightseeing tour boats are often focused on spotting wildlife and will try to get as close as legally possible with whales, seals, and sea lions, all of which can get spooked if boats get too close. Some tours, like the half-day wildlife cruise that departs from Seward Harbor, also explore areas with massive year-round glaciers like Resurrection Bay, where guests have a good chance of see mountain goats on the cliffs high above the water.

To see puffins, your best bet is probably visiting the Alaska SeaLife Center in Seward, unless you want to venture out to the less-accessible Beehive Island.

If you’re keen to see grizzly bears, your best bet would be to take a tour leaving from Seward but going somewhere else around the peninsula, rather than Kenai Fjords. From fly-in day trips to overnight camping in brown bear habitat, the various single- and multi-day tours from Seward can help guests get close to Alaska’s most famous predator. Many of the helicopter and small plane tours are whether dependent, so consider planning a free day or two in case you need to reschedule due to weather. 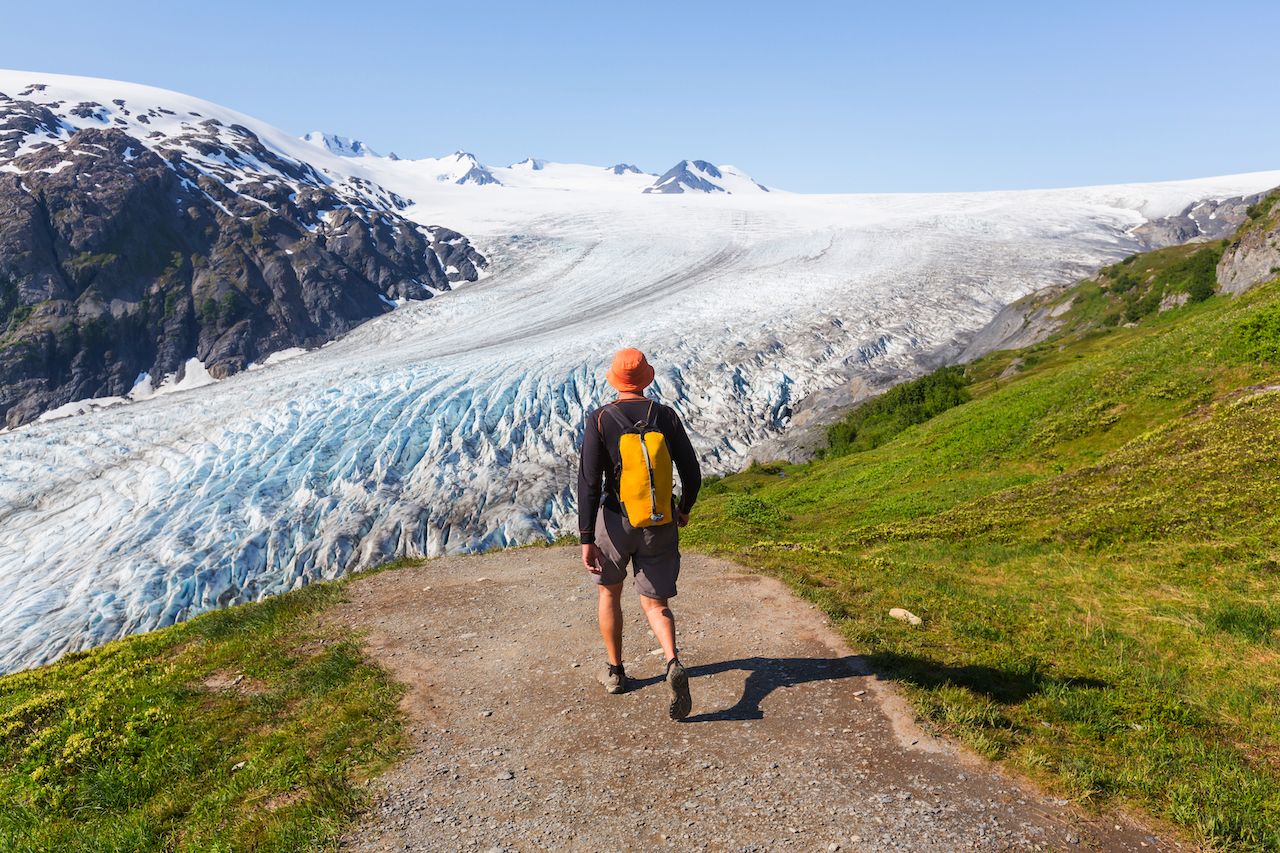 Just as Norway doesn’t have a monopoly on fjords, so too is Iceland not only place with epic glaciers. There are more than 40 glaciers in Kenai Fjords National Park, most of which connect to the Harding Icefield, which eventually empties into the ocean.

Kenai’s glaciers are a mix of tidewater and alpine glaciers. Tidewater glaciers reach down to the water, while alpine glaciers form in mountain basins, collecting snow and ice buildup to expand down mountains.

The park’s most famous and dramatic glacier is Exit Glacier, an alpine glacier just a 15-minute drive from Seward. Despite its imposing form, it’s actually relatively easy to reach on a hike. A network of well-maintained trails extend from the visitor center to the toe of the glacier, and the Glacier Overlook Trail climbs up to an overlook where you’ll get a view of the glacier itself. Along the way, you’ll find interpretive signs with information about the surrounding plant life, and there’s even a self-guided audio tour on the Alaska App for those interested.

For a slightly more arduous hiking experience, check out the Harding Icefield Trail, an 8.2-mile round trip trail paralleling the glacier’s northern edge. The icefield is a 700-square-mile remnant of the ice mass that once covered half of Alaska. Now, it’s the parent for the Kenai Peninsula’s glaciers, icebergs, and ice flows. The trail is rated as difficult with a 1,000-foot elevation gain, but the reward is incredible views of the glaciers and mountains. To really channel your inner mountaineer, take a guided hike on the glacier itself. It’s far more technical and involves scaling ice walls and navigating crevasses and moulins (deep holes in the ice).

Get out on the water 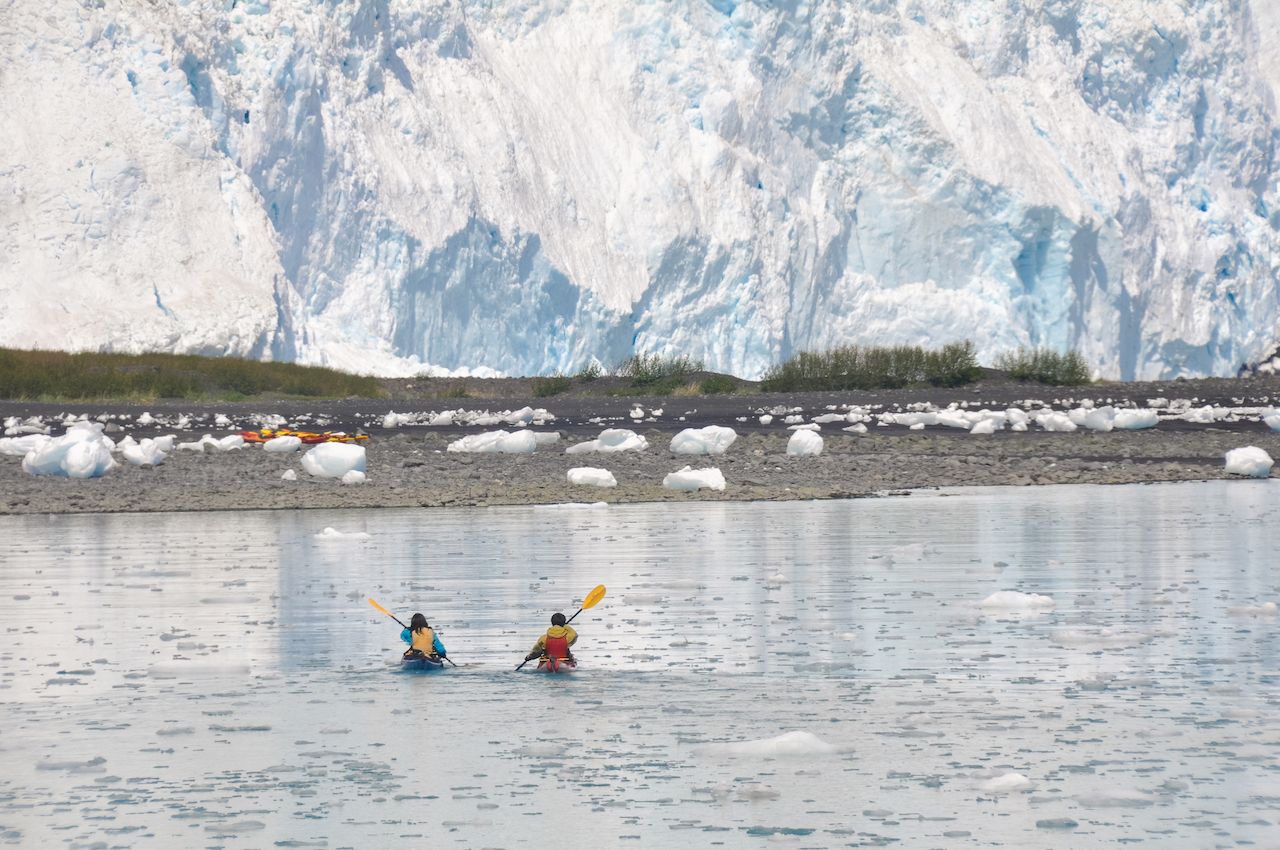 Perhaps the best part about Kenai Fjords is that you don’t actually have to exert too much effort to enjoy the most beautiful parts. While some level of hiking ability might be a prerequisite for enjoying most national parks in Alaska, that’s not the case here, and taking a leisurely boat tour might be the best way to see Kenai Fjords. Tours departing from Seward’s harbor will guide you through the fjords and glaciers of Resurrection Bay and the Gulf of Alaska, affording stunning mountain views the entire way.

A range of different cruises are offered through various companies, though wildlife tours are likely the most popular. Wildlife cruises focus on looking for puffins, orcas, gray whales, sea lions, sea otters, harbor seals, and a variety of marine birds including bald eagles. Other cruises focus on the more remote, inaccessible areas of the park, exploring fjords and tidewater glaciers.

To explore the park’s waters in a slightly more adventurous way, rent your own kayak. It’s not for the inexperienced or faint of heart, however, as the waters of the Gulf of Alaska are rough with few protected coves, and heavy wind and rain is common. If you’re up to the challenge, though, you can rent a kayak in Seward and venture to Resurrection Bay, Caines Head, and Thumb Cove, big for camping and rock climbing. If you want to make it into a longer trip, consider camping overnight along the shoreline. Make sure to read the National Park Service guidelines before choosing a camping spot.

For inexperienced kayakers who still want to get out on the water, it’s safest to take a guided kayak or paddleboard tour. They range from half-day to multi-day excursions and take guests close to glaciers (and hopefully even a few whales), all with the aid of an experienced guide.

Hang out in Seward 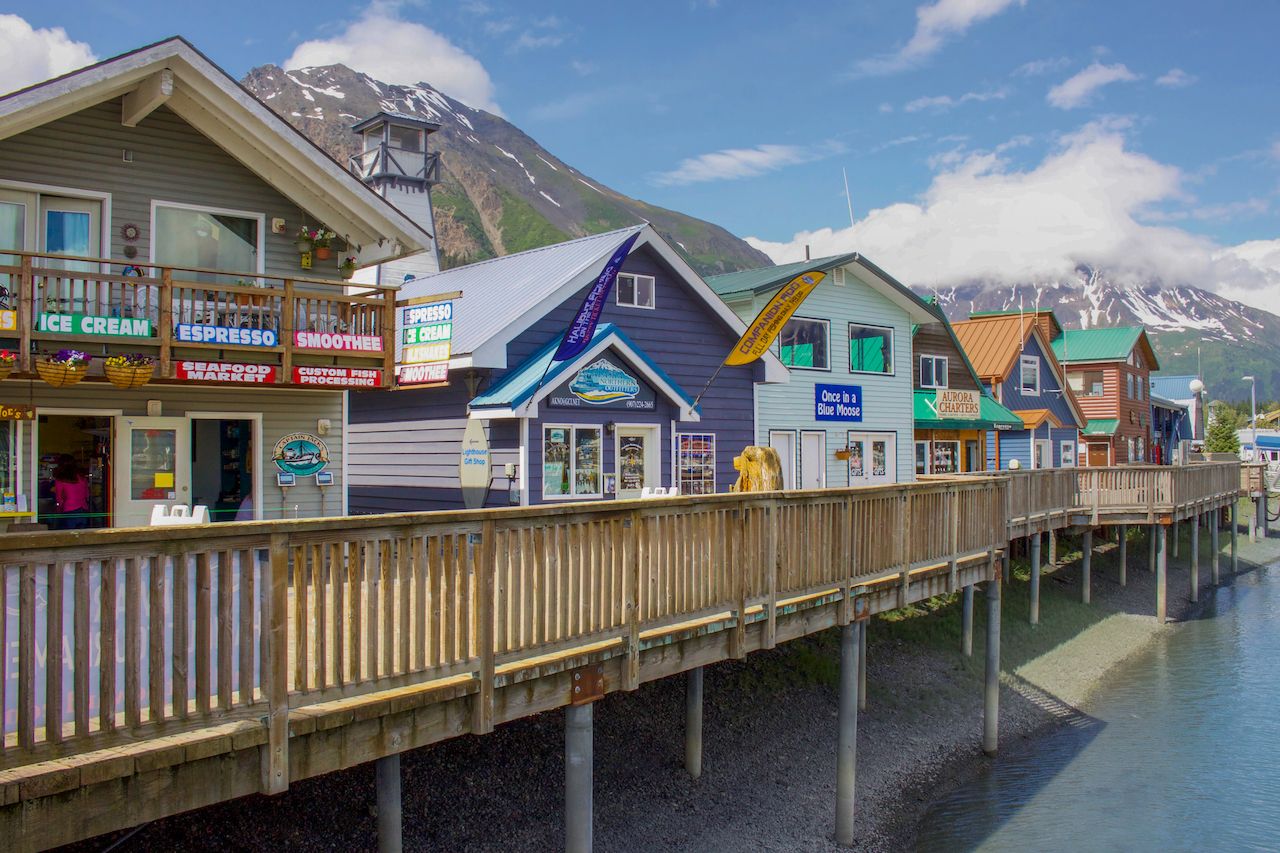 Seward, a town of just under 3,000 residents, is the perfect base for your adventures through Kenai Fjords National Park. And while it’s temping to spend every day in the park, Seward has plenty to keep you busy. One of the town’s main attractions is the SeaLife Center, a nonprofit research institution and public aquarium. It’s a good place to visit if you missed out on seeing creatures like puffins, sea lions, harbor seals, and giant Pacific octopuses in the wild. The center also has animal encounters tour that allows you to feed the marine life and get closer than you ever could in the wild.

You don’t have to hike a glacier for epic sightseeing, either. Seward’s waterfront park, which extends from the small boat harbor to the SeaLife Center, has tent and RV camping, a picnic area, beach access, and a trail with historical landmarks. It has fantastic views of the mountains across the bay and the active harbor. One of the most fascinating trail markers in this area denotes Mile 0 of the Historic Iditarod Trail, where the first-ever Iditarod race was held.

And while Southern Alaska may not seem at first thought like a place that would be an artistic hub, Seward impresses in more than just nature: it’s called the “Mural Capital of Alaska” for a reason. In 1999, a group of local artists came together to paint murals on panels in Seward’s high school. Since then, the group has grown from a spontaneous collection of volunteers to a society of dedicated muralists. The Mural Society’s goal is to bring life to Seward’s historical characters and events and celebrate Alaska’s beauty through art, and there’s an online mural map that makes for a fantastic walking tour of the town.

Road TripsDriving Alaska’s Dalton Highway Is the Most Remote and Epic Road Trip in the US
Tagged
Paddling National Parks Alaska, United States
What did you think of this story?
Meh
Good
Awesome