We’ve all heard the phrase countless times before: “As American as apple pie.” Many people have never questioned it. Apple pie is on the menu at most American diners, and Normal Rockwell featured the dessert in several of his illustrations. It’s unmistakably American — and yet that well worn cliche isn’t actually historically accurate. When you dig into the history of the earliest days of the American colonies, you’ll find that the pie most connected to this country’s roots is pumpkin, not apple.

“I think we should be saying as American as pumpkin pie,” Kathleen Wall, a living history colonial foodways historian at Plimoth Plantation tells me.

Pumpkins are native to North America. Columbus wrote about pumpkins he saw from his voyages and brought some back, as did subsequent Europeans, so people in Europe were familiar with them as early as 1492. Pumpkins and other squash were some of the first crops colonists planted when settlers arrived in America in 1621.

And then there’s pie. There’s been a love for pie in North America from the very first settlers to their present-day ancestors. According to Wall, early settlers cut up pretty much anything that could grow, baked it between two pieces of crust, and called it pie. In fact, culinary tastes of the era meant that almost all vegetables grown in the colony were baked in a pastry crust.

“Pie generally meant something a little more savory,” Wall says. “Tarts were the dishes where they added lots of sugar. That’s the difference between a pie and a tart in the 17th century.”

A matter of fillings 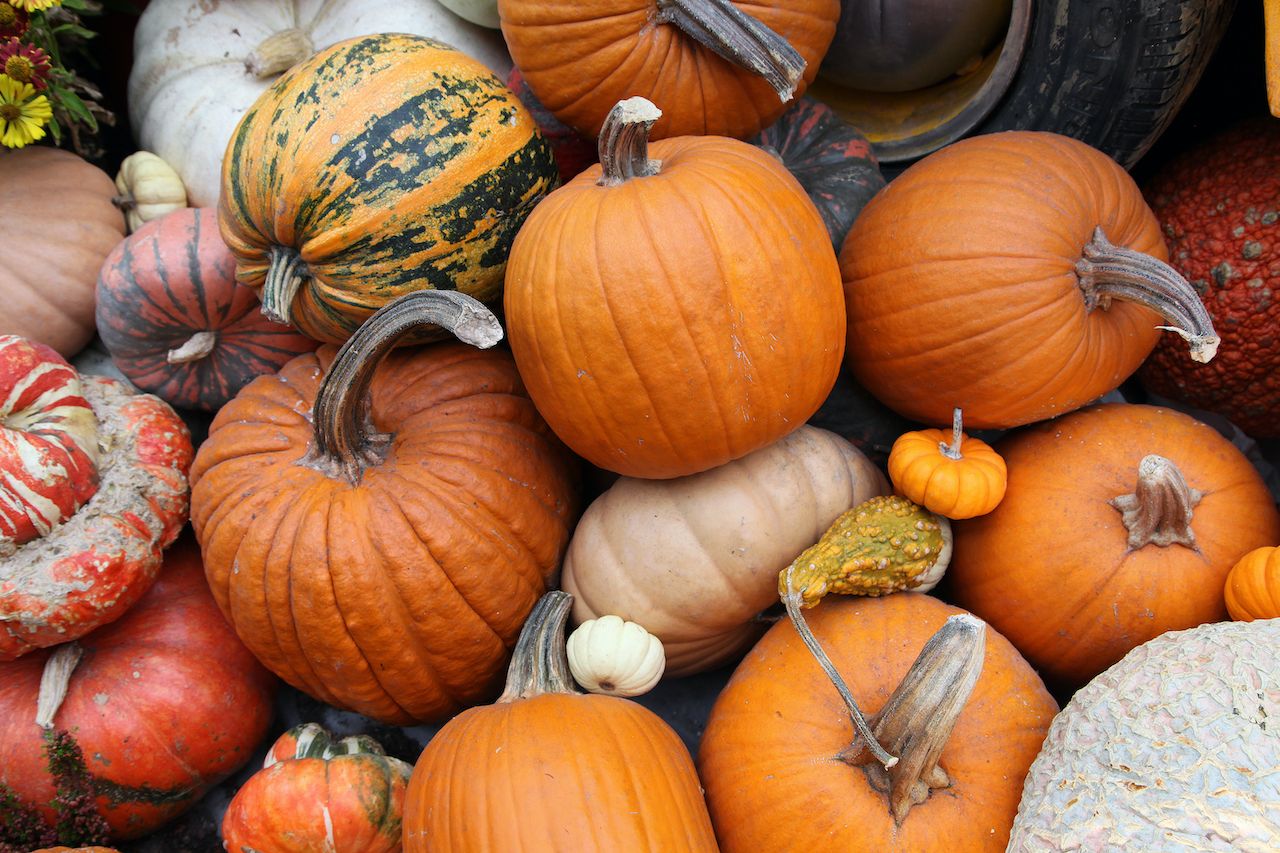 Pumpkin, not apple, was one of the dominant pie fillings in the early American colonies because apple orchards hadn’t been planted yet. A New England without apples is difficult to picture, but the first decade of the Plymouth colony was appleless.

Once apples were abundant in the colonies, 17th-century pie recipes popped up that combined sliced apples and pumpkins with butter and a little spice. These original pies, however, were more vegetable heavy. They used sliced pieces of pumpkin or squash mixed with spices and butter and then baked in a pastry crust. Pumpkin pies with a whipped, fluffy texture became widespread after the advent of Libby’s canned pumpkin puree in the early 20th century.

How pumpkin pie was traditionally served 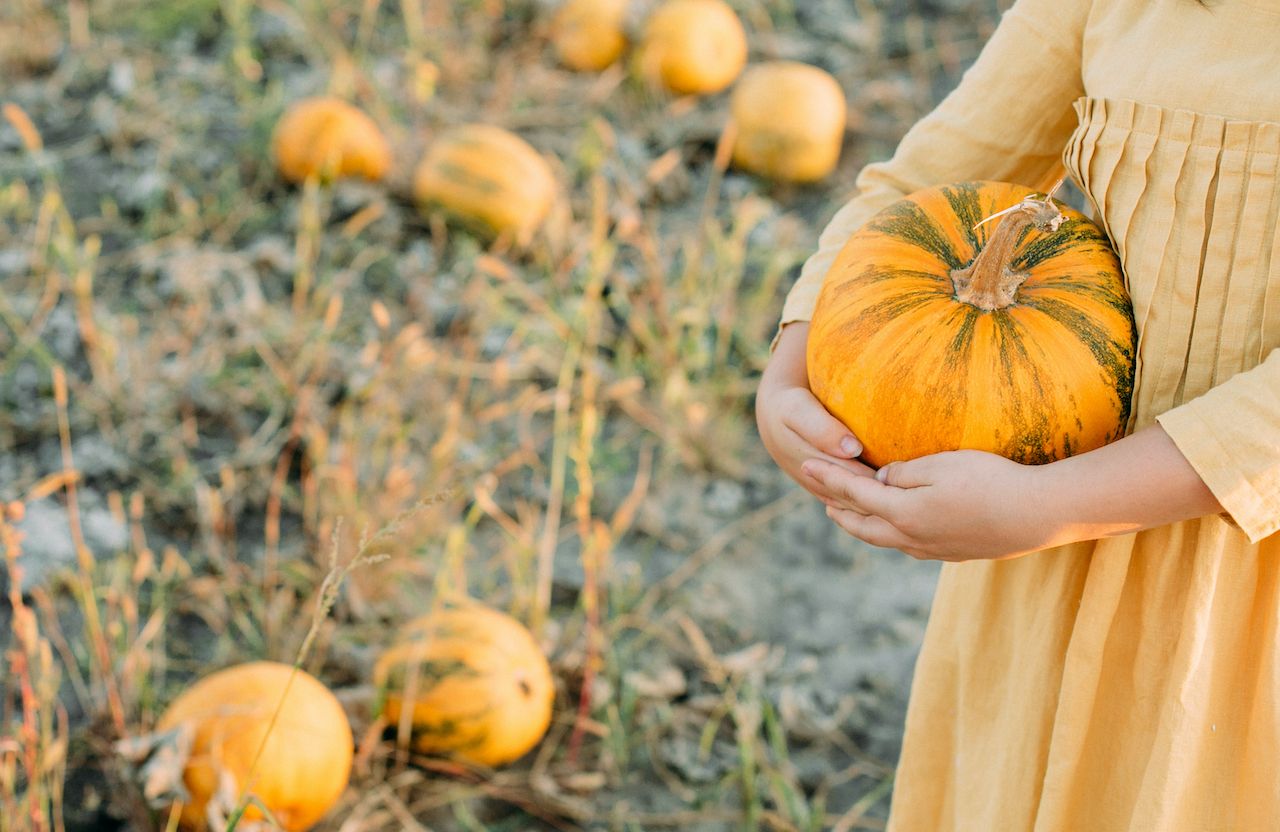 Pumpkin pie in the 21st century is relegated to dessert — a savory and sweet cap to an already decadent meal. Thanksgiving seems incomplete without it. But pies weren’t reserved for special occasions in the pilgrim household. Meals were served family style, and pies were set out with the rest of the main courses rather than being presented at the end of the meal. Once the family sat down to eat, the pies weren’t sliced, either.

“When you served a pie in the 17th century, you’d cut the top crust off, scoop out the filling, and then you’d take little bits of crust to go with it,” Wall says. “So pie acts like a container to hold the rest of the filling in.”

About that crust: There seems to be some confusion about the uses of early pie crust. New England’s early settlers called pie crust pastry or paste, and typically the ingredients were simple: hot or cold water, depending on the type of pie, butter, and flour. These crusts, sometimes known as the coffyn, became rock hard during the baking process, leading to the misconception that the crusts were tossed into the garbage once the filling had been consumed. America’s settlers, however, were much more industrious and recycled the pastry for future use.

“You would eat the pastry with the next meal, with broth, to thicken the broth. You didn’t throw it away,” Wall says. “Because when people go through all the trouble to grow food, like wheat or rye or other grains, and harvest it by hand, and thresh it, and grind it, they aren’t going to throw it away. They might not feed it to the lord of the manor, but somebody is going to eat it.”

Pastry crust didn’t really catch on in America until the 1640s, however, when the settlers began growing wheat and rye in the colonies. Maize, the corn favored by the Native American people already living on the land the pilgrims had colonized, made soggy pastry that fell apart. So, for the first 15 years the colonies operated, there was no crust made in New England — and therefore very few pies.

Hall says there was one exception: When long-serving governor of the Plymouth Colony William Bradford married in 1623, rye from England was used to make 12 venison pies.

Even before pie crust became commonplace, what the pilgrims did not do is bake pumpkin pies inside a hollowed out pumpkin. This cooking method is a widespread myth, plain and simple. Hall blames a widely shared video on how to make an in-pumpkin pie made by the channel How Does It Grow for the confusion.

“These videos have been showing up about how pilgrims didn’t use pastry, they cooked their pumpkin pie in a pumpkin,” she says. “I hate these videos so much, I can’t begin to tell you. It’s kind of true, but it’s not really true.”

Hall thinks that this misconception might stem from a 16th century source, who wrote that pumpkins the size of an acorn squash were hollowed out, then sliced bits of pumpkin and apple were added and baked together. The real dish would have looked and tasted more like an acorn squash side dish, not a sweetened pumpkin pie. But even so, Hall says she has no record of that dish even being cooked in the colonies, only in 17th century England.

“That’s very different than taking this giant field pumpkin and hollowing it and pouring in four quarts of cream and a pound of sugar, and baking that forever and a day,” she adds.

As American as pumpkin pie 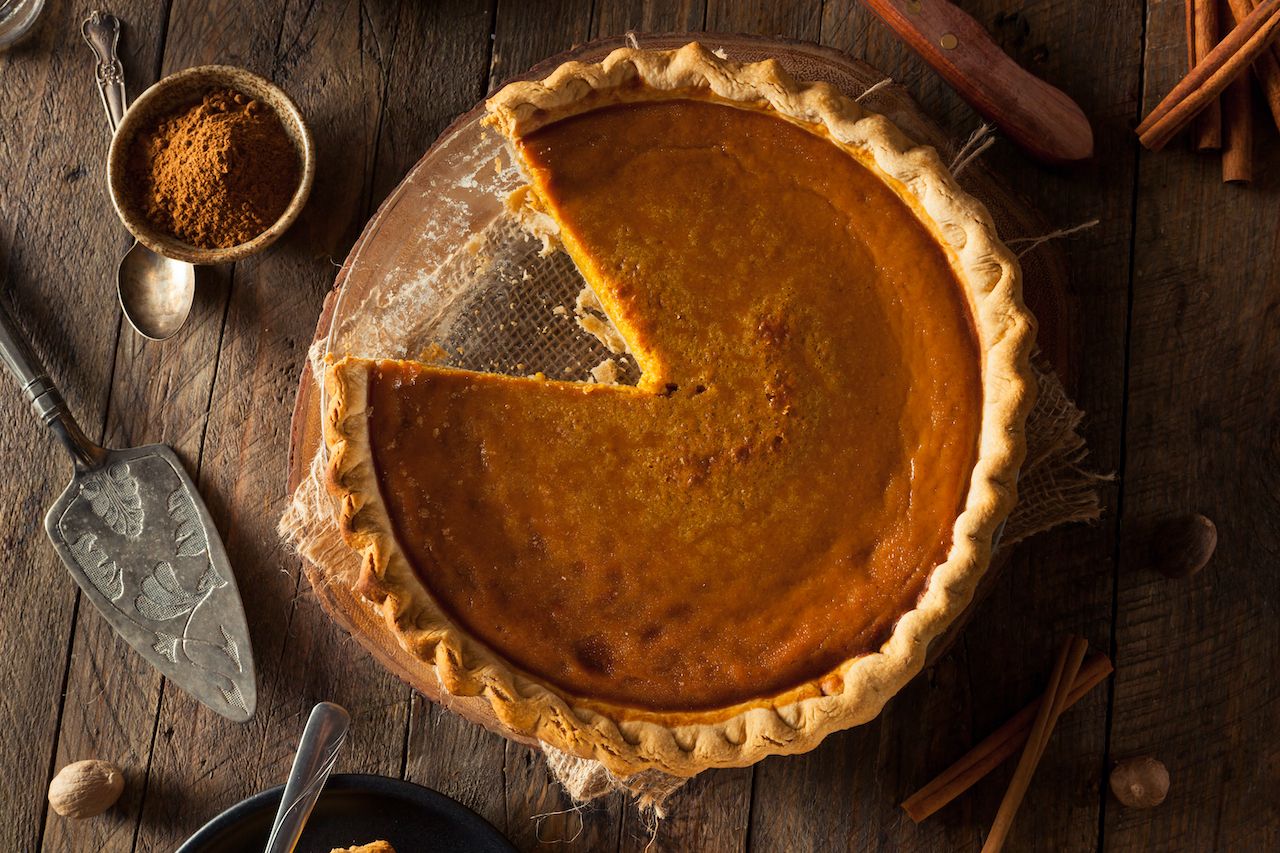 Pies were undoubtedly a major part of the cuisine in the New England colonies. Until Amelia Simmons published her cookbook in 1796 — the first cookbook written in America by an American — reprints of cookbooks from England, where pies had long been a staple dish, circulated in the colonies. The pilgrims ate plenty of pies, just not apple pie.

It would take a little more than 20 years after the first successful colonies before apples appeared in pies or anything else. America’s earliest settlers filled their pies with what grew most abundantly in their backyards, and that was pumpkin. So next time you’re thinking about celebrating America, pull out the pumpkin pie recipe you’d usually save for Thanksgiving.

Food + DrinkThe most American thing about apple pie is its global origin story
Tagged
Food + Drink Dessert
What did you think of this story?
Meh
Good
Awesome