Pie is revered in the modern American household. Juicy apples mixed with sugar and cinnamon make much-anticipated appearances in the kitchen throughout fall and winter. Rich, creamy spiced pumpkin and sweet potato pies are delivered on Thanksgiving. Deep burgundy red cherry pies are served on Christmas.

Despite their differences, all these pies have one thing in common: crust. Without flakey, buttery crust to cradle the fillings, pie would hardly be the jewel of the dessert table. But the origin of modern pie crust — the workhouse of the dessert world — is just as tied to funerals than festivities. In fact, at the very beginning of the life of pie, the crust wasn’t even edible.

To understand how pie crust became what it is today, we have to go back to the Ancient Greeks. Not only did those crafty Mediterranean-dwellers write the first epic poems and invent both geometry and the Olympics, but their bakers were also likely responsible for the original pastry shell.

The Greeks made their pastry shell from a simple mixture of water and flour to form a kind of paste to swaddle meat (fruit pie wouldn’t arrive on the scene until the 16th century). The conquering Romans adored these delicacies and were the first to record pie recipes and spread them throughout Europe. Perhaps the most well known of these, written down by Cato the Elder, is placenta — thin strips of wheat flour pastry layered with honey, ricotta, and bay leaves to create a dish slightly reminiscent of lasagna.

By the mid-16th century, pie crust developed a more solid definition. One recipe published around 1545, from the Proper New Booke of Cookery, offers the following instructions: “To make short paest for tarte. Take fyne floure and a cursey of fayre water and a dysche of swete butter and a lyttel saffron, and the yolckes of two egges and make it thynne and as tender as ye maye.” 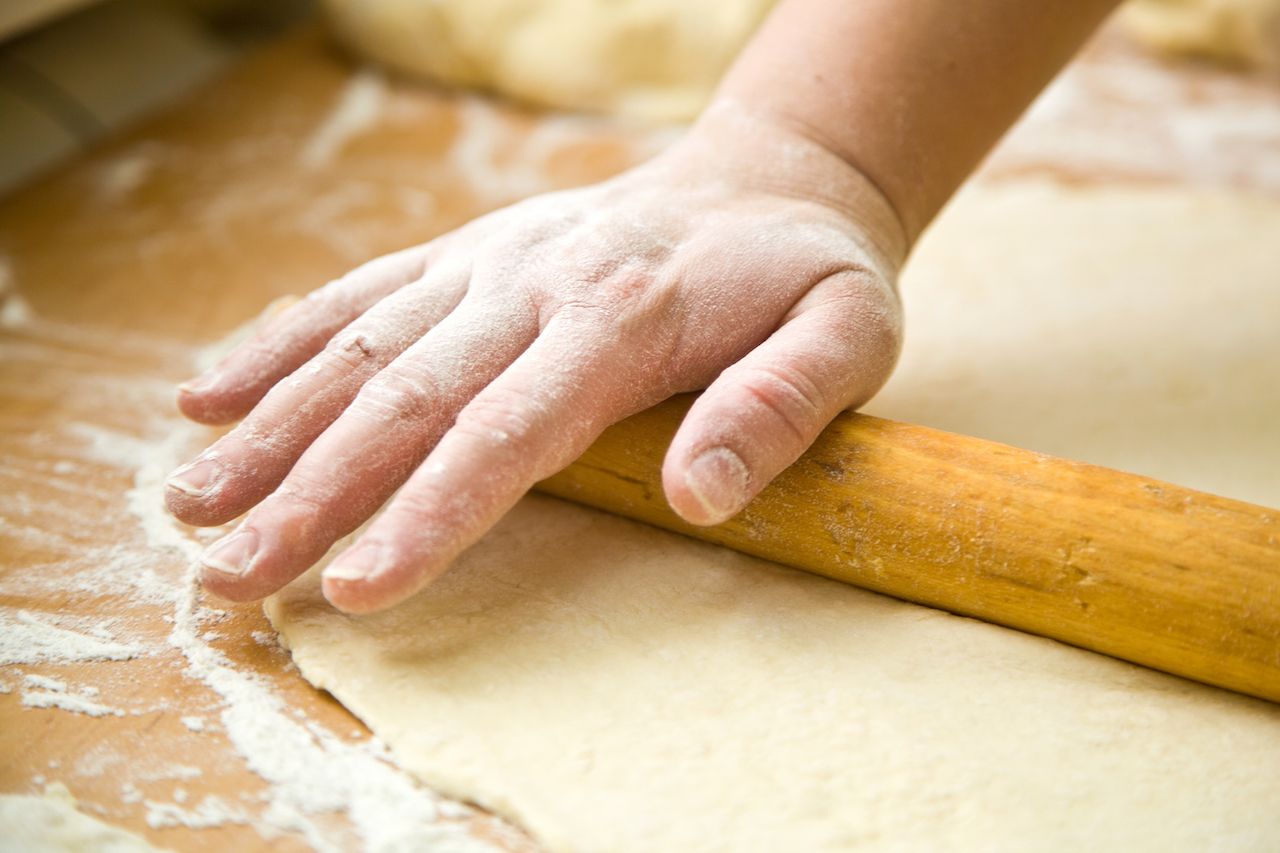 It’s at this point in history that pie crust takes a funerary turn. In 16th century Europe, pie crust became known as the “coffin” or “coffyn” surrounding the meat inside — peacock, pigeon, boar, duck, and even tortoise were among the popular offerings at the time. The fillings were the meal, not the crust, which was several inches thick to withstand many hours of baking. The thick crust, which became inedible and rock hard during the baking process, trapped all the delicious juices from the meat inside the “coffin” casing. This new cooking method turned out to be a big improvement from the days when cooks produced hunks of tough, dried-out meat from clay ovens.

The term coffin might sound off-putting when applied to your dinner, but it simply described the pie as a basket or box. This dining method proved popular throughout medieval Europe. For one, it required no additional dishes and could be eaten by hand, no utensils needed. And that’s not the coffin pie’s only practical purpose.

In Janet Clarkson’s book, Pie: A Global History, she writes that this hefty pastry case served as a container similar to a lunch box. It was a way for people to both transport their food and preserve it (especially important before refrigeration when people needed a way to make their food last). Sometimes, the baker carved a hole in the top of the crust and poured melted fat into the hole to act as a seal against intruding air, thus keeping it fresh for an extended period.

Noblemen and women might have considered coffin pastry inedible, opting instead to dine on the decadent fillings inside, but Clarkson is convinced that doesn’t tell the whole story. During this time, growing and harvesting grain and turning it into flour had to be done by hand — a process that without any machinery or technology would have been incredibly labor-intensive.

“It is surely not likely that such a hard-won resource was simply discarded after the contents were eaten even in the great houses,” Clarkson writes. “The crust may not have been intended for lords and ladies, but the well-to-do were obliged to feed their servants and were also expected to feed the local poor.”

Incredibly, the story of coffin pie gets even weirder. In the 16th century, culinary trends included the so-called surprise pie, meant to entertain guests at a banquet. A book called The Italian Banquet, published in 1598, describes a surprise pie filled with live birds, ala the Purple Wedding in Game of Thrones. 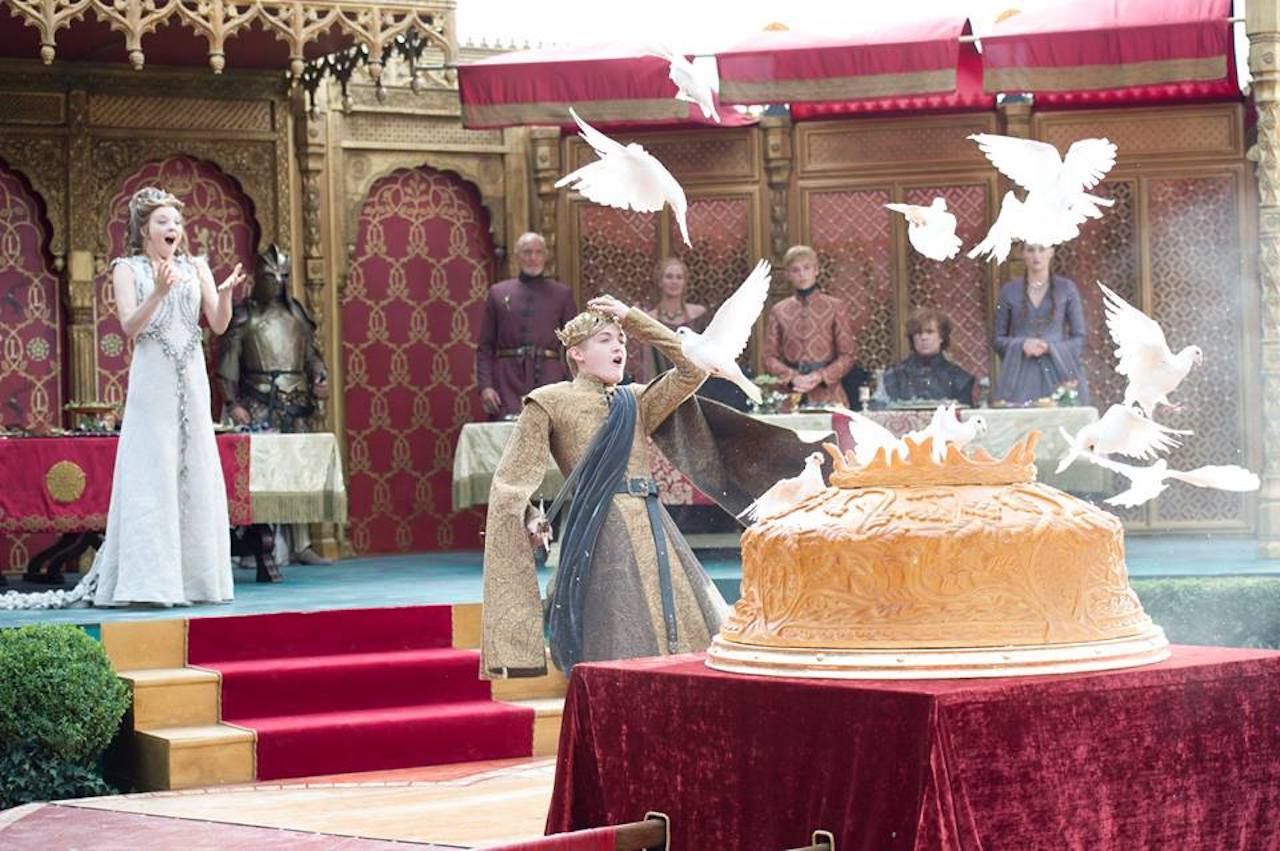 To make this magic trick work, the coffin pastry is baked with a hole “as big as your fist, or bigger if you will,” in the bottom of the pastry. It’s then stuffed with “as many small live birds as the empty coffin will hold,” and the bird-filled coffin pastry is placed in front of the unwitting guests. Once the pie is cut (taking care to avoid the creatures inside, probably) the birds were released from their pastry cage, “which is to delight and pleasure shew to the company.” The instructions also encourage the host serving this surprise pie to be sure to bake another edible pie filled with cooked meat so the guests don’t go hungry.

“Pie That the Birds May Be Alive In” does raise some questions: Did the birds fight their entrapment, breaking open the pastry? Did they squawk inside the pie, giving away the surprise? The mysteries of the surprise pie will have to lie in the past, but one thing is certain: Today’s buttery, flaky, tender pie crust is a far cry from the utilitarian pie crusts of the past — and for that, we should be thankful.

Food + DrinkIt’s Not Christmas in Mousehole Without This Fish Head Pie
Tagged
Dessert Food + Drink
What did you think of this story?
Meh
Good
Awesome