In large parts of the world, especially in Europe and Asia, trains are the most accessible, fastest, and most efficient mode of transportation. Here in the United States, on the other hand, the chronically underfunded Amtrak will get you nowhere in a hurry and is tragically going out of style. But Amtrak’s reputation as antiquated is unfair. Trains might be slower than planes, but they are undeniably the most romantic way to travel. A picturesque, leisurely journey through Upstate New York all the way to Vermont might not be everyone’s cup of tea, but if it sounds appealing to you, the Amtrak Ethan Allen Express should be part of your travel plans next time you’re in this part of the country

Things to know about riding the Amtrak Ethan Allen Express

When I recently took the Amtrak Ethan Allen Express, my journey started at Moynihan Train Hall (part of Penn Station). I recommend getting to Moynihan Train Hall at least an hour in advance (if not more). Moynihan Train Hall has a full bar and food court, with options like ramen, fried chicken, and Italian sandwiches. I settled down at the bar with a beer and a bowl of spicy miso ramen, and ate at an unhurried pace. 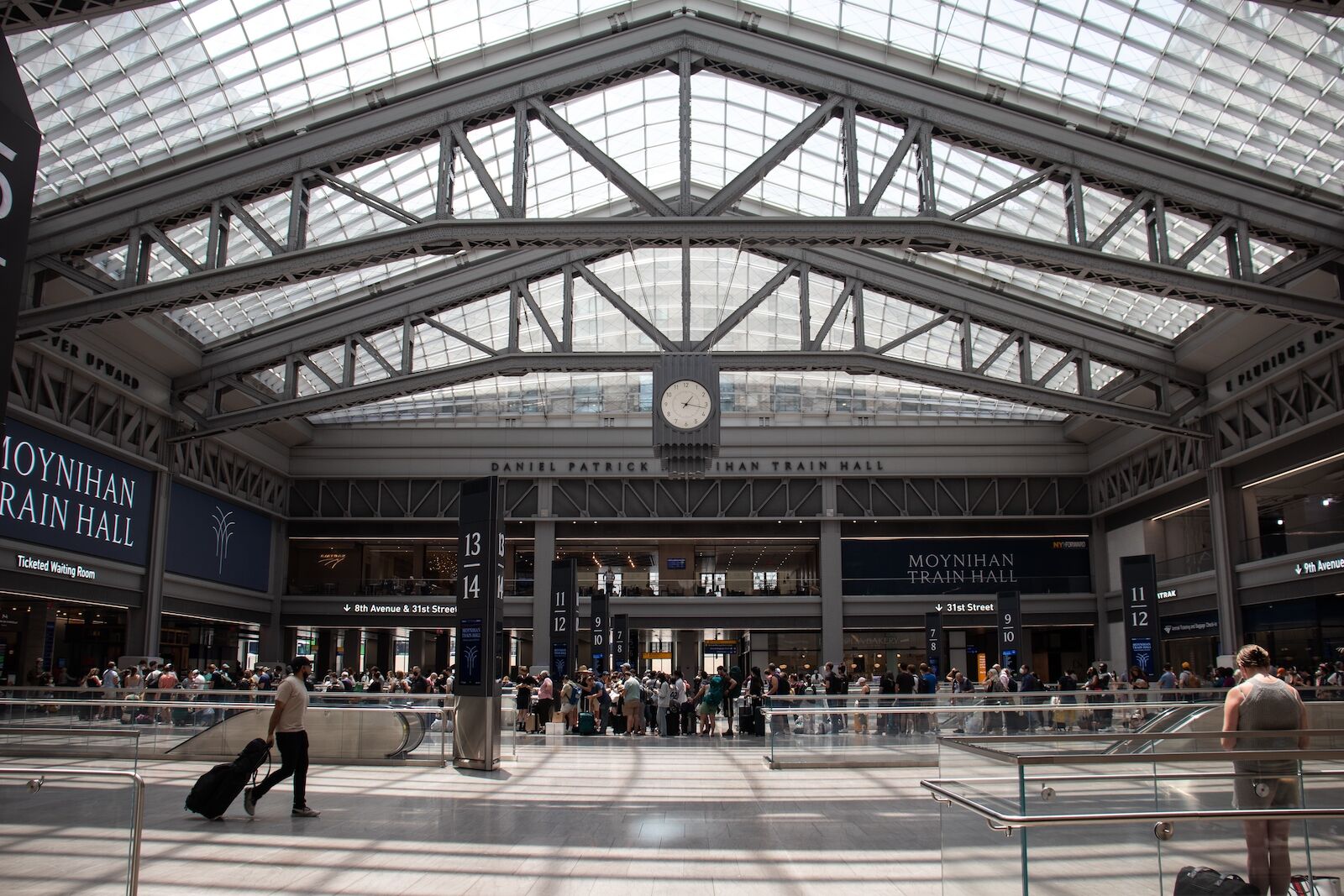 Amtrak food options are limited on the Ethan Allen Express, however the cafe car is fully stocked with muffins, sandwiches, chips, pretzels, beer, wine, and other snacks. Just be aware that the options are pre-packaged and reheated. While totally edible, there were more appetizing options to be found inside the train station’s food court. By getting to Moynihan Train Hall early, I could eat fresh food, and still have time to grab a sandwich and snacks (including a banana pudding and a chocolate cupcake from the Magnolia Bakery inside the train station) for the ride. The trip is over seven hours, so you want to make sure your bag is well stocked with snacks.

Besides packing some food with you, one other key factor about Amtrak to keep in mind for such a long journey is that the passenger cars are cold. I kept my winter coat on the whole time, but you might want to think about bringing your own blanket if you want to get cozy in your seat — you won’t get a blanket from anyone on Amtrak.

Speaking of your seat, this is one thing Amtrak certainly does better than a plane. The seats are wide and cushioned, and there is plenty of room to stretch your legs and stash your bags. Of course, sitting anywhere for over seven hours will get uncomfortable, but you can walk to the length of the open train cars to get your body moving.

People who are used to flying to the other side of the country and getting there in a flash might balk at such a long trip, especially since the drive is about five hours, i.e. two hours fewer than the train ride. However, in return for their patience, passengers on the Ethan Allen Express get unobscured views of the Hudson River, and the farmland of Upstate New York and Vermont. This has to be one of the most scenic Amtrak routes.

The scenery, in winter in particular, is spectacular. The train passes through the Hudson River Valley and runs parallel to the majestic Hudson River. Groups of ducks float by on the gentle waters, and it’s fun to spot the grand mansions and sometimes even castles (watch out for the eerie sight of Bannerman’s Castle, which burned down in 1969 and is now in ruins) that have been erected along the banks of river — and even on some of the islands and narrow peninsulas.

Once you get to Vermont, the landscape changes to snow-covered farms, frozen ponds, and spindly, leafless trees, making for a serene, pastoral picture of this region. Coursing dark rivers cut through desolate-looking farms, and hills covered in snow-dusted beech, birch, and maple trees, rise up in the distance. If you’re anything like me, you’ll be snapping photos and marveling at the pristine winter wonderland outside your window.

Enjoy the tranquility that comes with riding an Amtrak train

Once the train gets underway, there really isn’t much to do. I read for a while, and tried to get some work done on my computer, but Amtrak WiFi is unreliable so I had no internet connection from my seat. This didn’t bother me though. A long trip on Amtrak delivers you from the modern obligation of completing tasks, and instead encourages you to simply sit and take in your surroundings — there aren’t many spaces and moments left that allow people to do nothing, so enjoy it as much as you can.

There is an unspoken contract between passengers that allows these moments of peaceful reflection to happen — nobody talks loudly, watches television, or listens to music without headphones. (At least this was the case in my car; on one of my jaunts through the train, I came across a group of teenagers watching the World Cup who were most definitely violating this unwritten rule).

Eventually, I wandered over to the cafe car, where I bought a half-bottle of wine and a bag of pretzels. Passengers can only sit in the train car if they’re eating or drinking (and there are no laptops allowed) so I found a seat in one of the booths and mostly just stared out the window. It was an experience straight out of classic Christmas movie White Christmas, in which the plot hinges on a train ride to Vermont.

My mind got still and quiet. I enjoyed gazing out at nature, bundled up in my coat with my plastic cup of cheap wine. It was actually a relief to not have to be outside, trekking through the snow, my hair whipping around my face in the winter wind. It was a new — and more comfortable and warm — way to experience the outdoors.

Where to stay in Burlington

We hope you love the hotels we recommend! Just so you know, Matador may collect a small commission from the links on this page if you decide to book a stay. 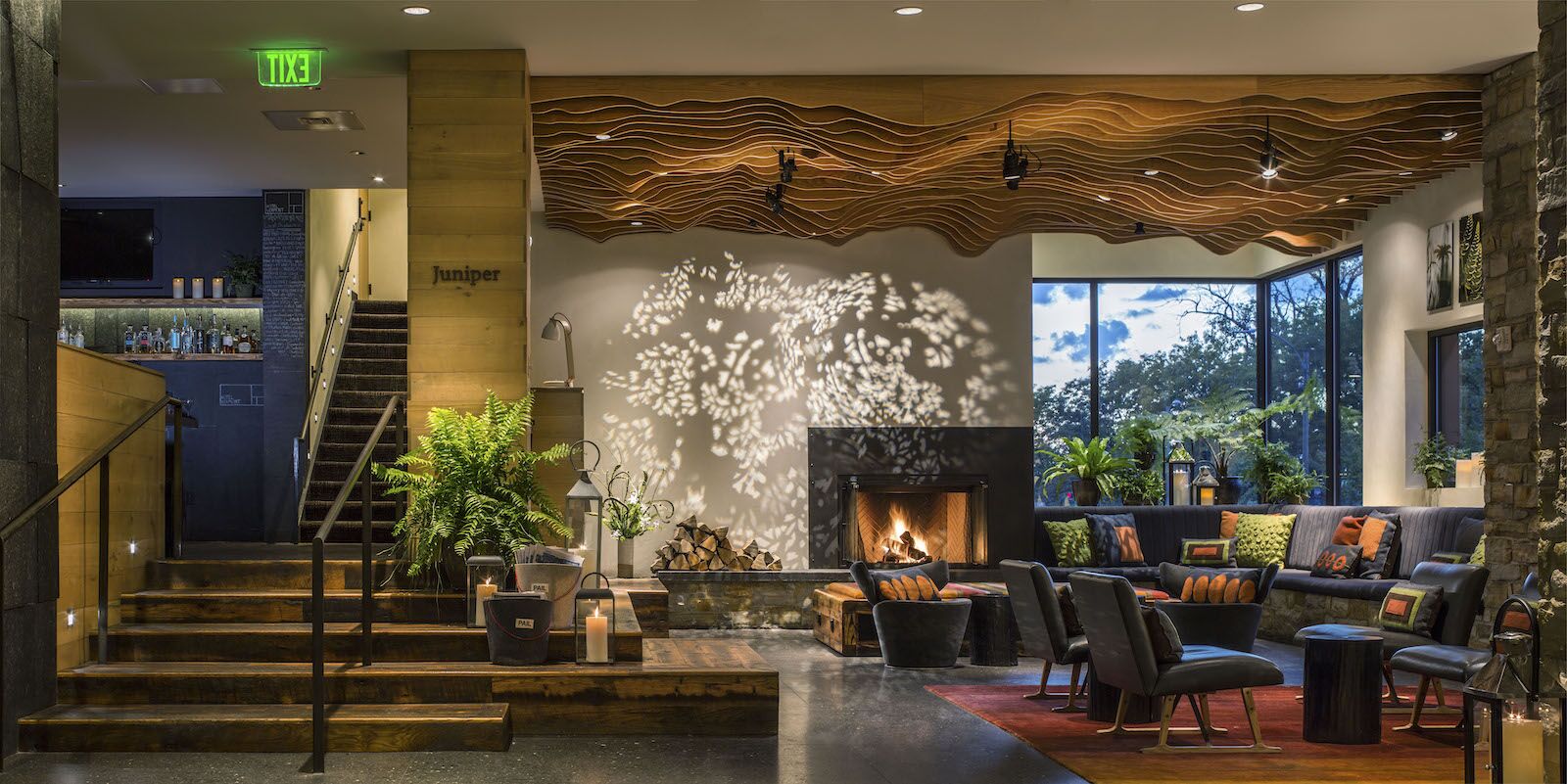 Once you get to Burlington, there are hotels within walking distance of the train station (people who have a lot of luggage beware, it’s an uphill walk). I opted for the Hotel Vermont. This charming hotel has a little more character than the hotel chains that are next door. The sitting room was decorated with two Christmas trees and there was a fireplace, and a stack of firewood in the corner, adding to the cozy, wintry atmosphere. The rooms themselves have charming unfinished wood accents, and plush comforters to snuggle into after the long train ride.

In the morning, I highly recommend having breakfast at the hotel — the hot sauce served with the two eggs and toast breakfast is exceptional. There’s also a self-serve Bloody Mary bar.

Train Travel9 Luxury Train Rides in the US That Are Worth Splurging On
Tagged
Train Travel Vermont, United States
What did you think of this story?
Meh
Good
Awesome