While bears hibernate and several bird species head south of the border in winter, many other animals remain visible during the colder months here in the United States. With a keen eye, you can spot one or two — so long as you place yourself well and remain patient. Just because it’s cold outside doesn’t mean we can’t do some serious wildlife spotting. Here’s your guide to some cuddly-looking and some not so cuddly — but all warmly furred or feathered — animals to spot this winter. Just remember that wild animals are just that: wild. So please give even the cutest of them their space. 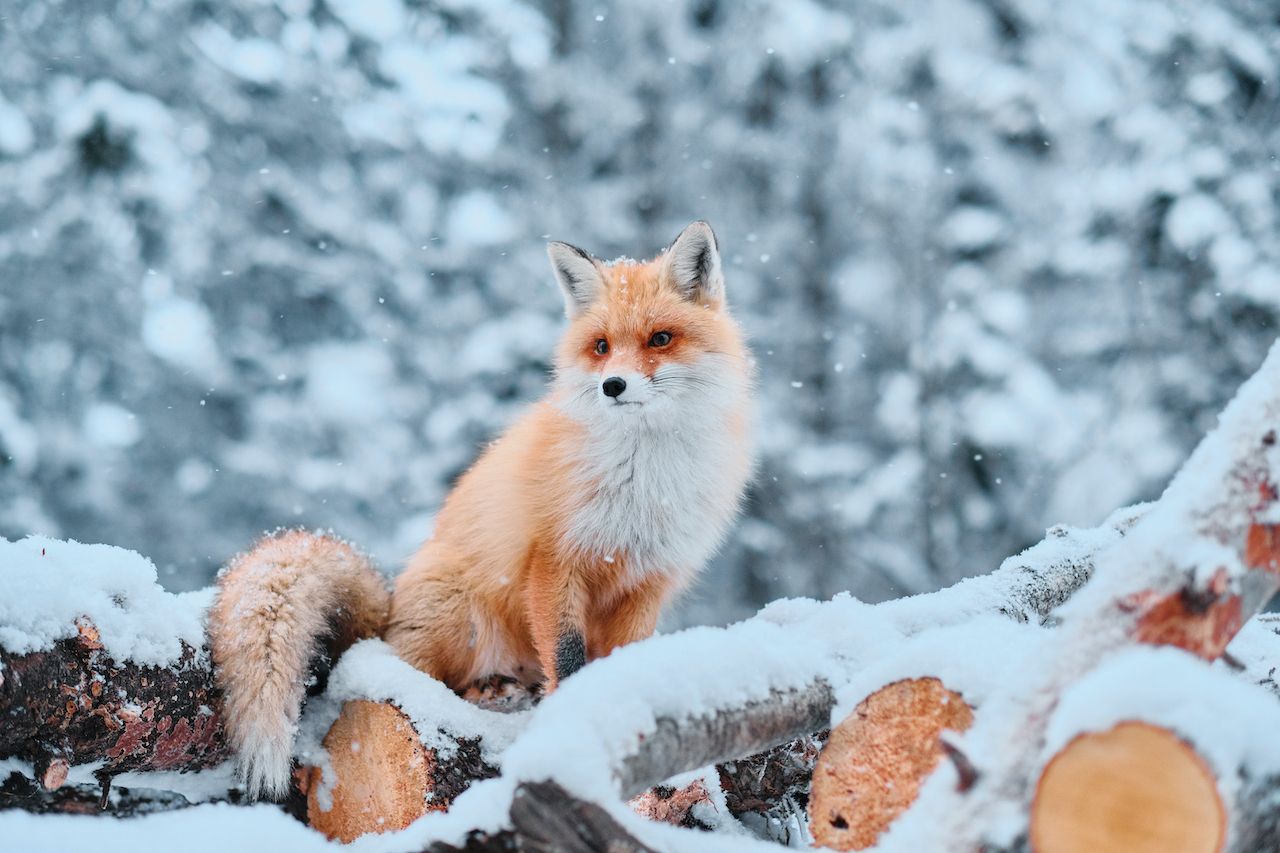 Red foxes are sly, but their bright vermillion-hued coats are much easier to spot when contrasted by an open field of snow. Because they spend much of winter foraging — and can often be seen sleeping curled right on top of the snow out in the open, rather than in a den — foxes are a regular sight in open plains of the Midwest, across the valleys of the Rockies, and even in drier climates like Utah’s canyon country. Of all the furry species on this list, foxes are among the few found in nearly all parts of the country. 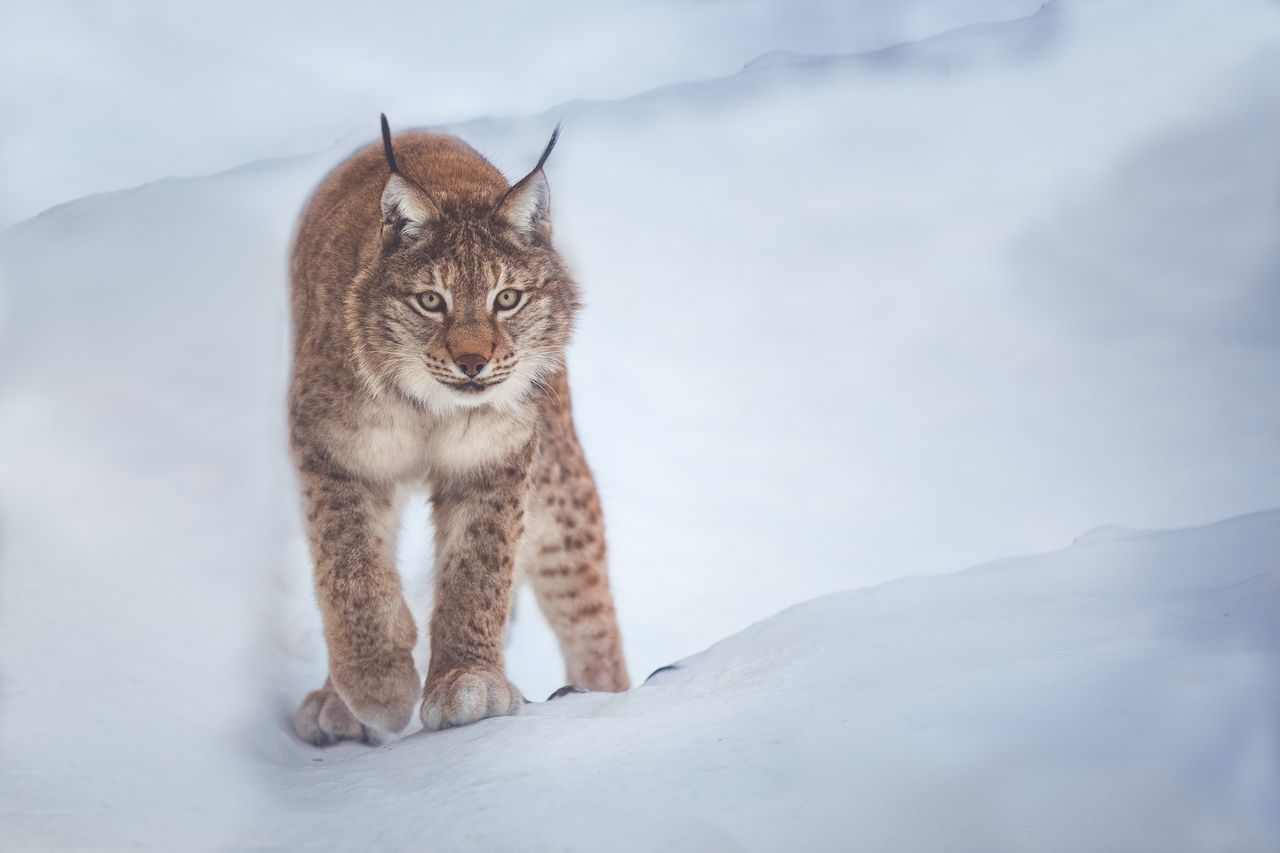 The tuft of black hair that distinguishes a lynx from other mountain cats stands out in stark contrast to the winter snow in the Rockies. As such, the lynx can actually be easier to spot in winter than in summer, particularly in Colorado, where a reintroduction program in the 1990s brought more of these furry felines to the state’s high country. They’ve been most noticeable in Eagle County, home to Vail, where you can embark on a free snowshoe tour in hopes of spotting one. This may sound like a foolish errand, but lynx aren’t actually into attacking humans — though you should leave your dog at the hotel. You can also spot lynx in Montana, Wyoming, Idaho, and near the coasts in Washington state and Maine. 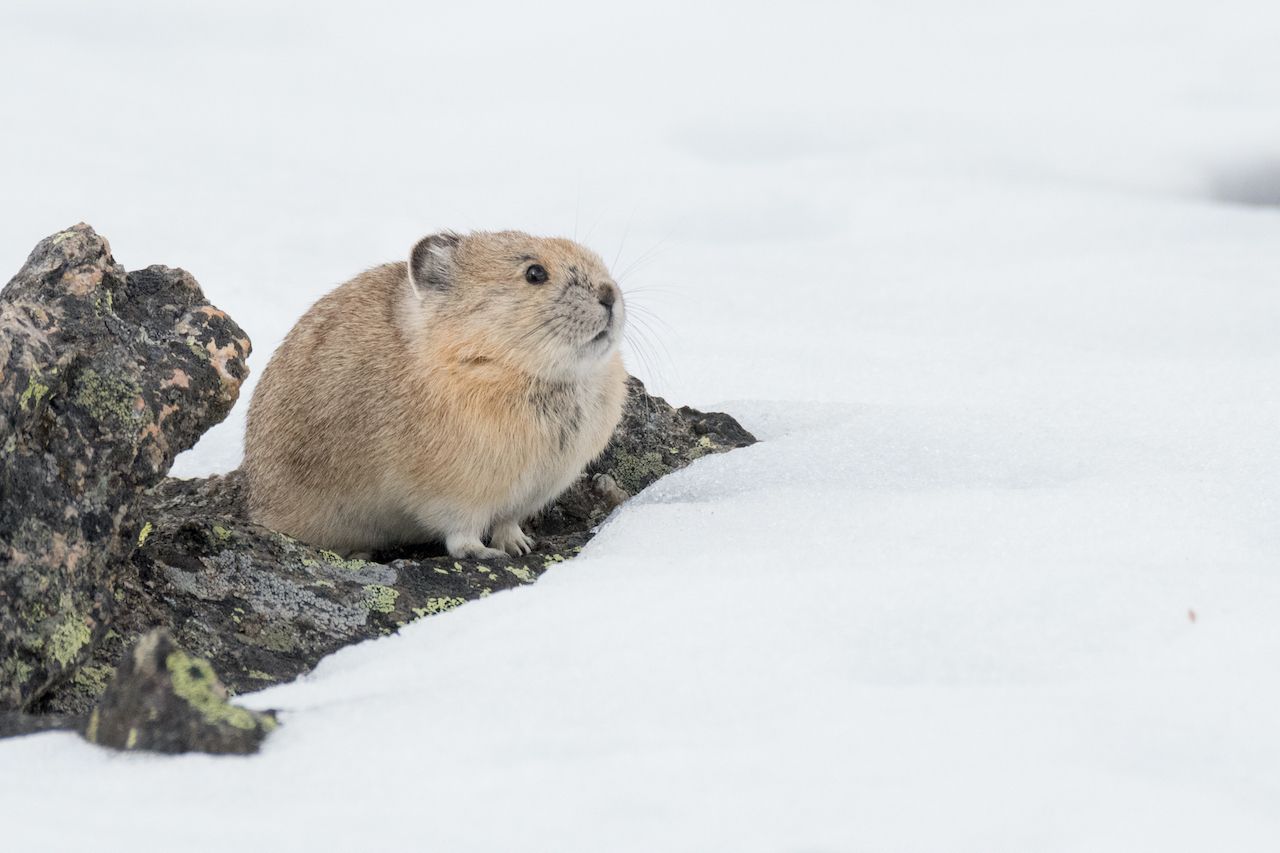 Not to appreciate the sight of a mountain pika is not to appreciate being in the mountains at all. Pikas are a staple of the high country, and even the most lightly colored among them possess a ripple of darker fur that stands out in winter. If you head on a ski vacation to Montana’s Big Sky, Wyoming’s Jackson, or the resorts of Colorado’s Summit County, keep an eye out for pika while making turns above the treeline — that might not be sluff running alongside you. 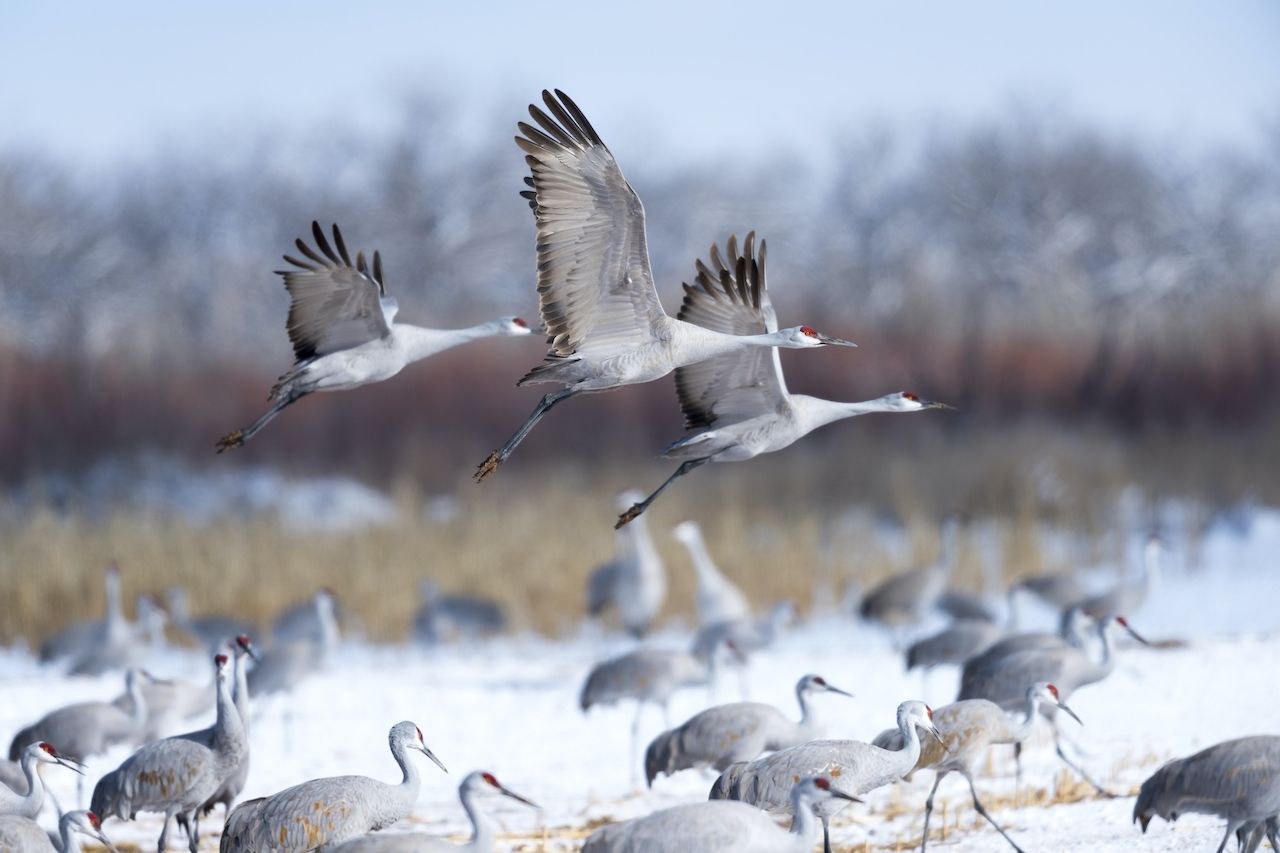 Residents of the Midwest and South are in luck when it comes to spotting sandhill cranes. Very common in northern Midwest states, these birds migrate south to Florida for winter and then back again in early spring. You’ll see them flying overhead, spreading their wings sometimes more than 7.5 feet in length, or nesting in prairies, marshes, and tundra. Head to the Great Plains during the migratory seasons and you’re bound to see flocks of sandhill cranes flying and feeding. They can be quite loud, so listen for their call when you’re trying to locate them. 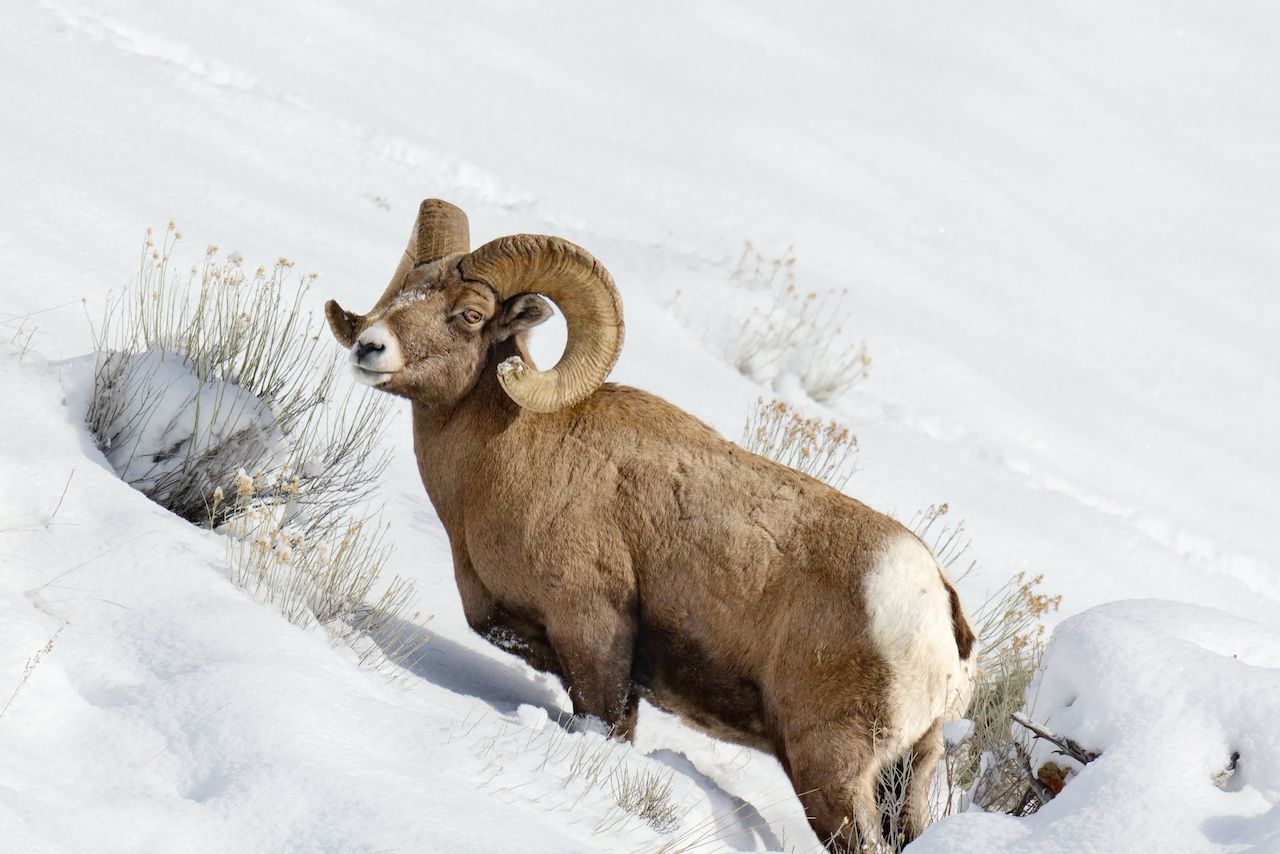 Colorado’s Rocky Mountain National Park is a prime spot to see bighorn sheep, where they tend to move across south-facing slopes with less snow and more sun. Bighorns move all about the Rockies, though, so you might see them traversing the high country from New Mexico north through Montana and into Canada. On the Qest Coast, California bighorn sheep roam the higher altitude open plains of Oregon and California, as far south as Anza-Borrego Desert State Park east of San Diego. Spottings are frequently reported at Cleman Mountain in central Washington state, as well. 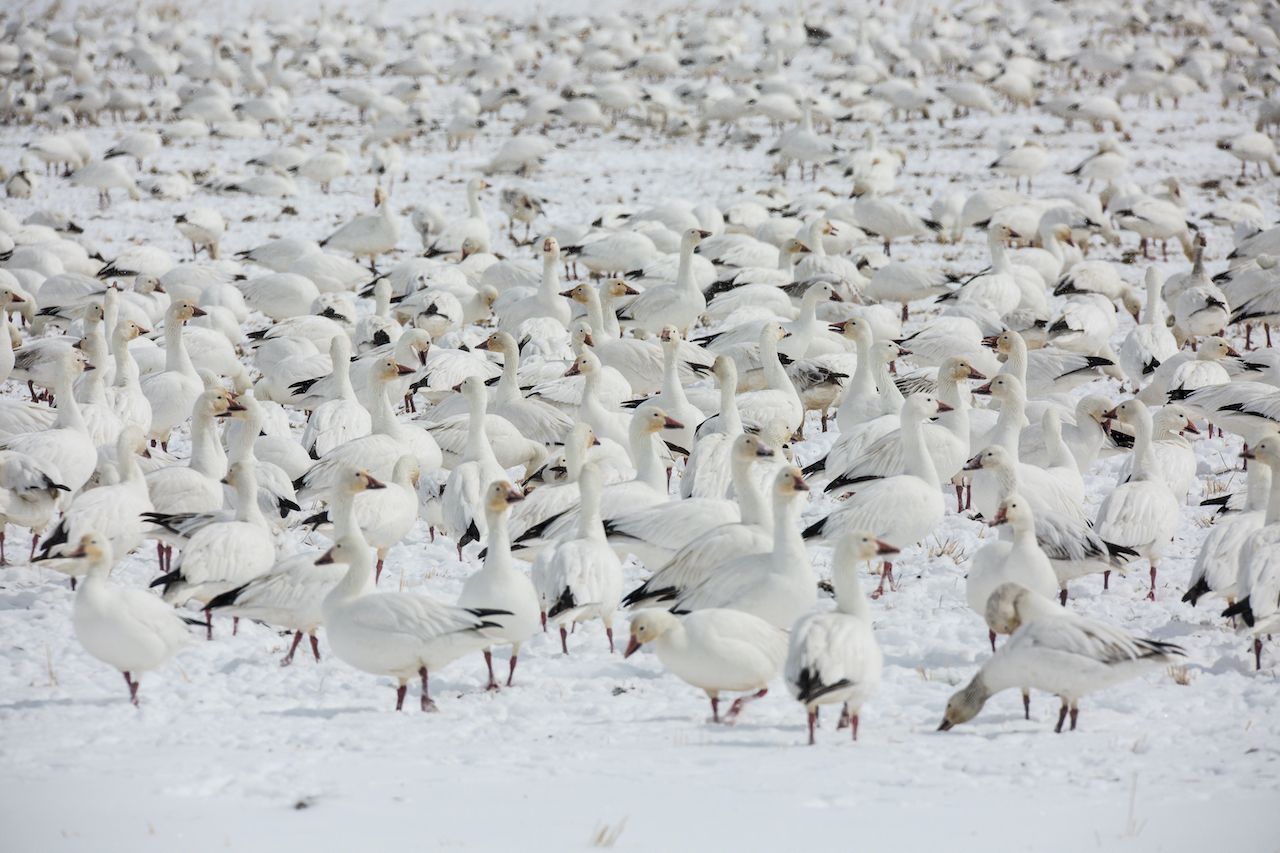 Snow geese live off of a diet of grasses and grains, meaning that in winter you’re most likely to find them in the southern states with wide-open wet grasslands and marshes. They like shallow pools of water and spend the non-breeding months of winter in eastern Nebraska, Kansas, Oklahoma, and Texas, and across Missouri, Louisiana, Arkansas, and southern Iowa. You can spot them migrating north toward the Arctic at the end of winter just about anywhere in the central part of the country, from the high plains east of the Rockies all the way to New England. 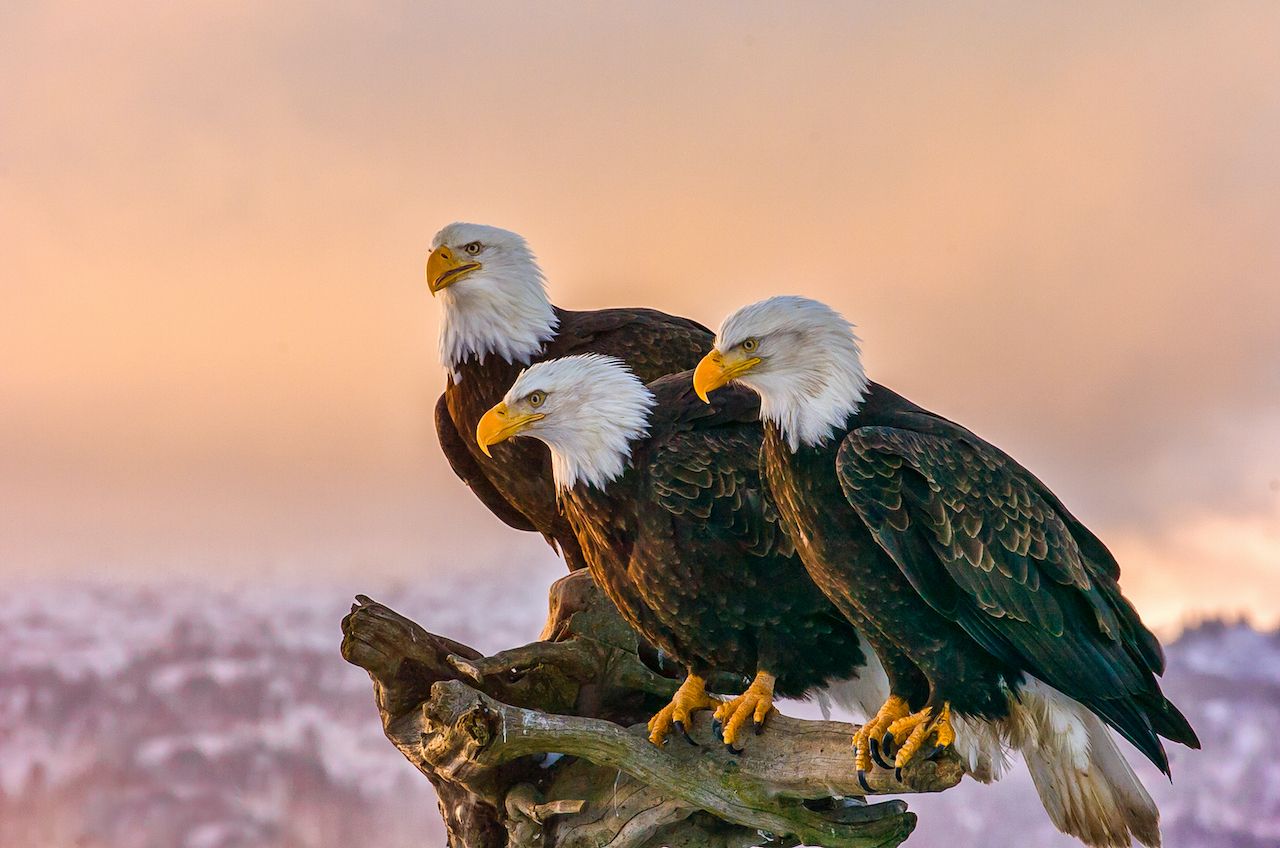 Bald eagles call every US state home in winter save for Hawaii. Thing is, you’ll have to keep your eyes peeled to the sky to spot one. They aren’t found low to the ground. For the best odds, head to open rangeland with plenty of water and old-growth trees, where the eagles prefer to nest. They’re also commonly spotted in rangeland with high numbers of carcasses for them to feed on. To confirm it’s a bald eagle, look for white heads on top of dark brown bodies and their famed expansive wingspan — which can reach eight feet. 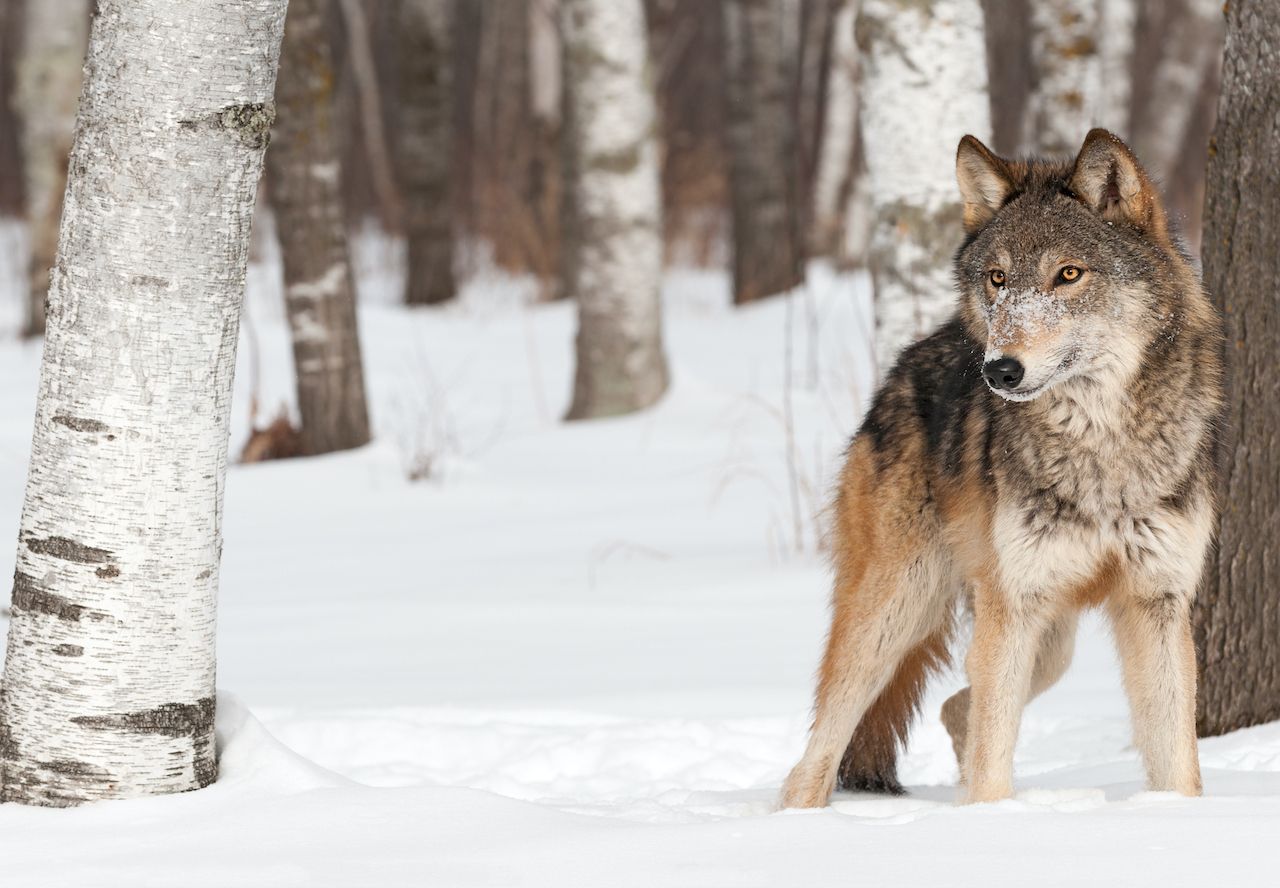 Northern Yellowstone National Park is home to 10 packs of roaming wolves, which stand dominantly against the whitened ground of the park in winter. This makes Yellowstone the best spot to see wolves in winter, as there are many pull-off spots and traffic tends to slow when animal sightings take place. Elsewhere, you may see wolves in Alaska’s Katmai and Denali national parks and mountainous national forests of Arizona, New Mexico, and, on rare occasions, Wyoming. Other places to seek them out are at the Alligator River National Wildlife Refuge and Isle Royale National Park in Michigan. 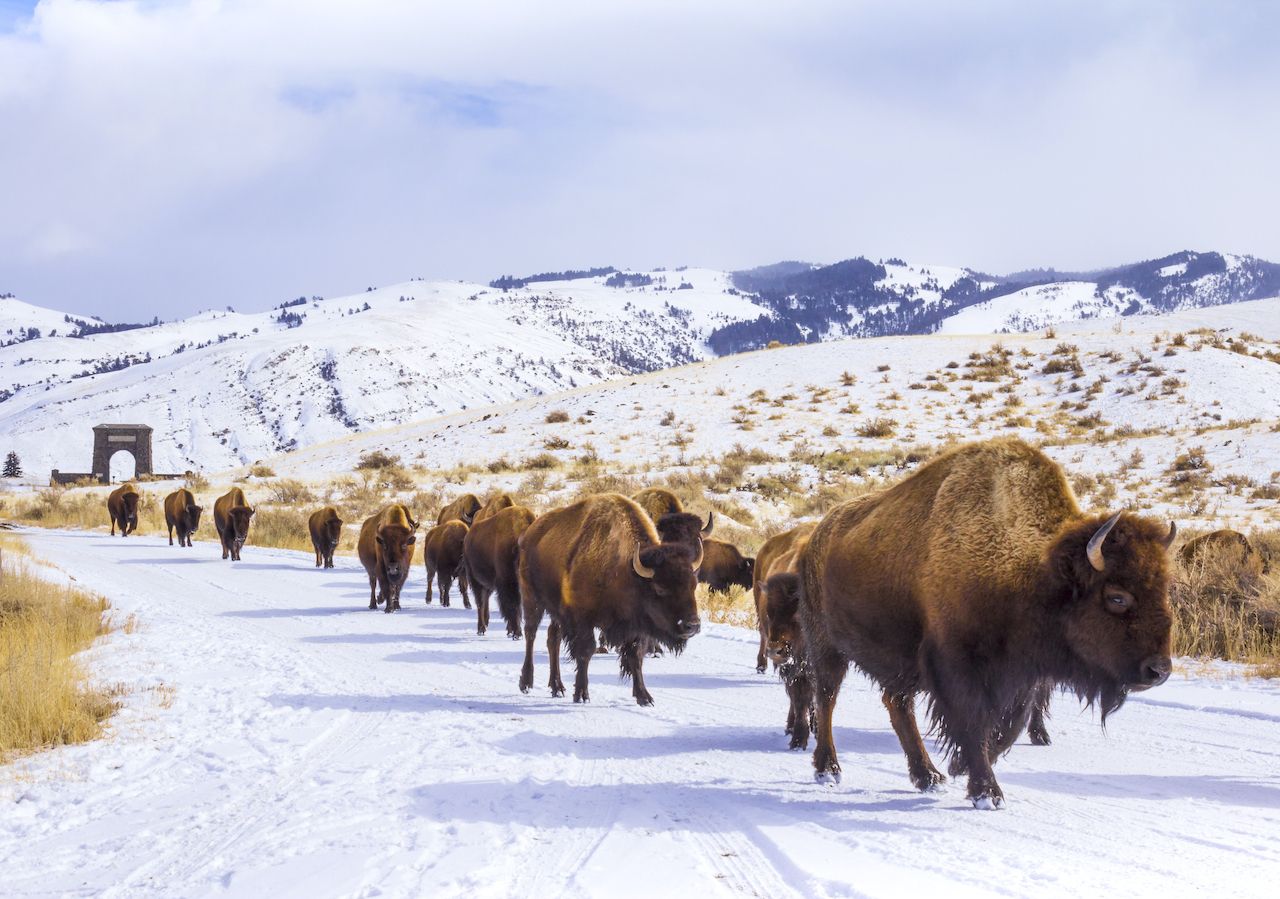 Before the arrival of Europeans, buffalo dominated the open plains of the central and western US. Today there are as little as 15,000 left in the entire world. You can still see them in places like Yellowstone National Park, where they migrate to lower elevations in winter, and along the I-70 corridor in Colorado — where a bison viewing pull-off just west of Denver offers your best chance. In Montana, catch bison roaming the Fort Peck Reservation, home to the Assiniboine and Sioux, and in the Henry Mountains of Utah. If you happen to make it to Alaska this winter, bison are known to roam around Delta Junction. 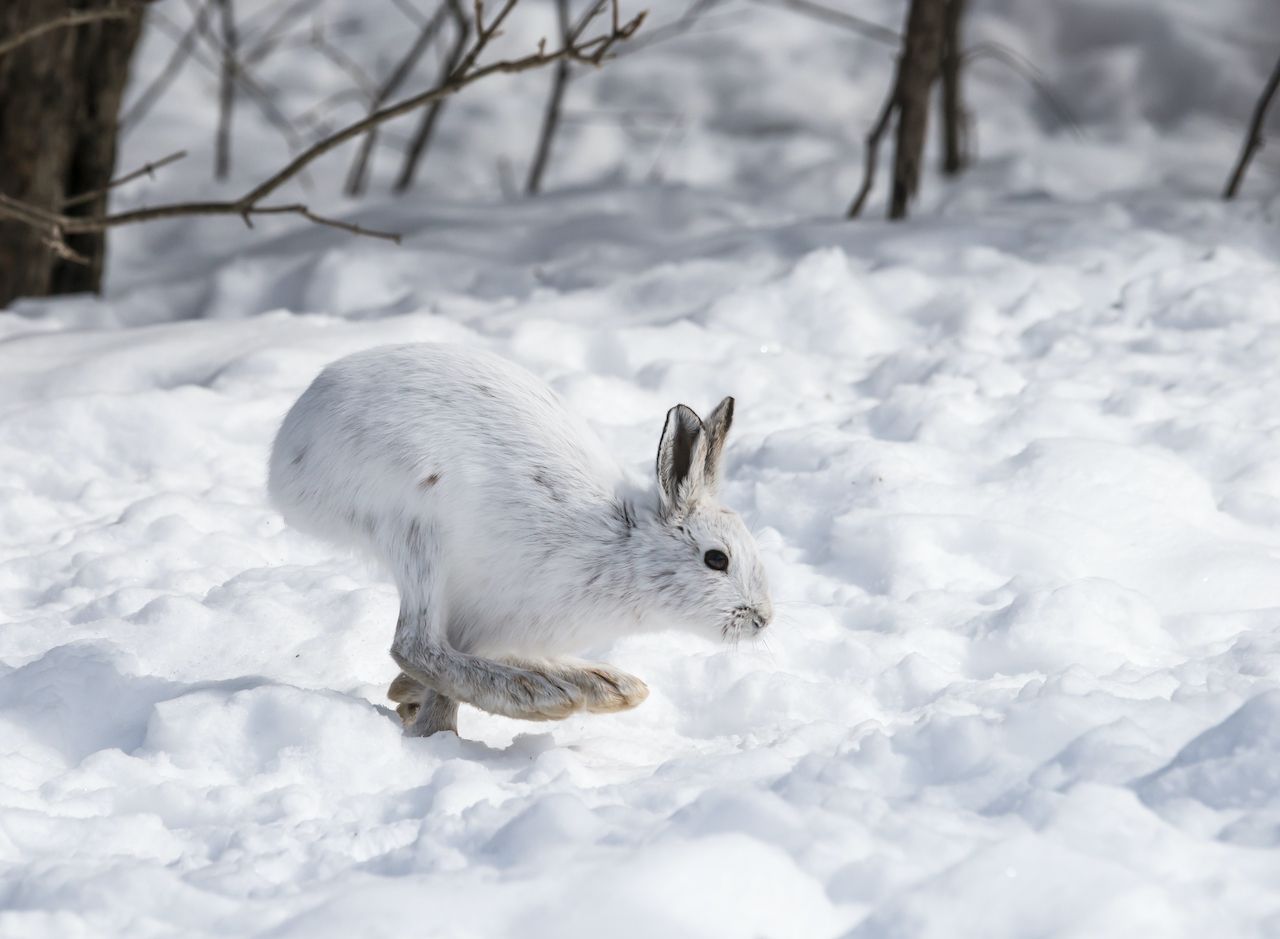 What with its winter white fur and a genetic evolutionary pattern designed to optimize its ability to camouflage, a snowshoe hare isn’t always easy to glimpse — but if you find yourself in New England, the Upper Midwest, the Rocky Mountains, Appalachians, or Pacific Northwest this winter, keep an eye out for these furry hoppers around dawn and dusk. Because they are nocturnal, your best bet to spot one is during the golden hour on both sides of the day.

Beaches and IslandsWitness the Stunning Beauty of Thousands of Nesting Sea Turtles on Oaxaca’s Escobilla Beach
Tagged
Wildlife
What did you think of this story?
Meh
Good
Awesome