In Spanish, the term arribada means “the arrival.” No word better encapsulates the majestic journey undertaken by the threatened Olive Ridley sea turtle to return to its nesting grounds on Escobilla Beach, in the Mexican state of Oaxaca. A 9-mile expanse of wave-pummeled sand on the Pacific Ocean near the popular surf destination of Puerto Escondido, Escobilla Beach is famous among turtle aficionados worldwide. And just my luck, I had arrived in time for one of the largest arribadas of the last few years at one of the top five beaches in the world to experience it.

As I made my way over the ocean ledge that opened onto the wide expanse of Escobilla Beach, I drew in my breath. What appeared to be large boulders covering the entire mass of the beach were actually thousands of female sea turtles in the throes of the intense and beautiful process of beaching themselves to lay hundreds of eggs before returning to the ocean from where they had come — a coordinated mass nesting. You too can experience this. Here’s how. 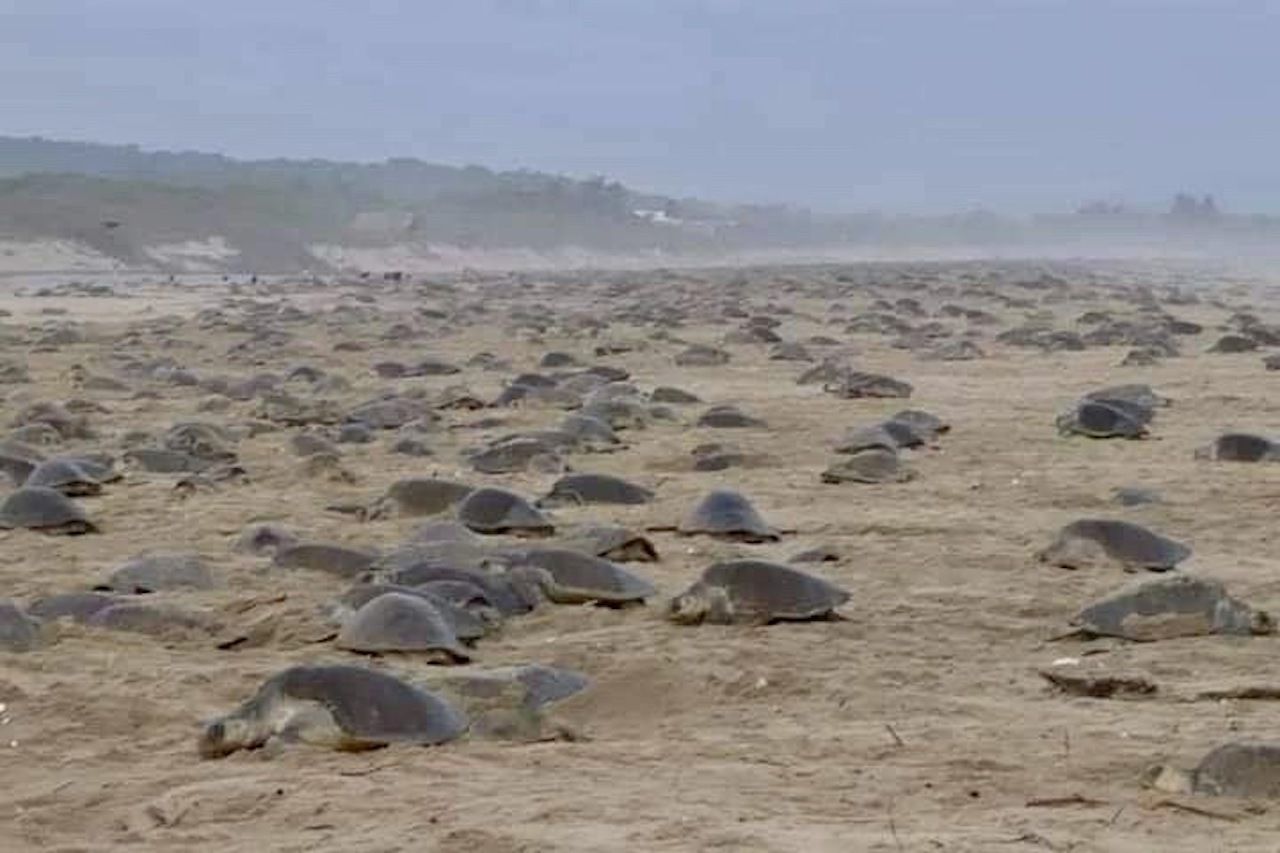 From July to January (peaking in September and October) Olive Ridley turtles arrive in numbers of up to 90,000 over 3-5 day periods, often coming in from the ocean near dawn, on a high tide and a full moon — all elements that add to the magic of the experience.

Olive Ridley turtles are one of the smaller of nine kinds of sea turtles, though they can still reach up to 110 pounds in weight and often stretch over two feet in length. After years of reckless turtle egg harvesting and hunting, the Olive Ridley’s breeding grounds are listed as endangered and are now protected by the Mexican state. Escobilla Beach, home to the nesting, is fiercely guarded against poachers.

To understand the journey that these sea turtles make to return to Oaxaca to lay their eggs is to understand the importance of protecting them. The Olive Ridleys who I watched crawl relentlessly out of the crashing waves this fall were born on this very beach at least 15 years before. The scientific community has yet to prove or entirely agree on how the turtles accomplish this incredible feat, but it is certain that the female sea turtles have some sort of honing mechanism allowing them to return to this spot where they hatched years later once they reach sexual maturity. The turtles may nest every year or even twice a year, and will always come back to this same spot, making Escobilla Beach, now protected as a sanctuary, a shoo-in for viewing these en mass nestings if you’re in Oaxaca during the right season.

Experiencing a magical moment at the end of a long journey 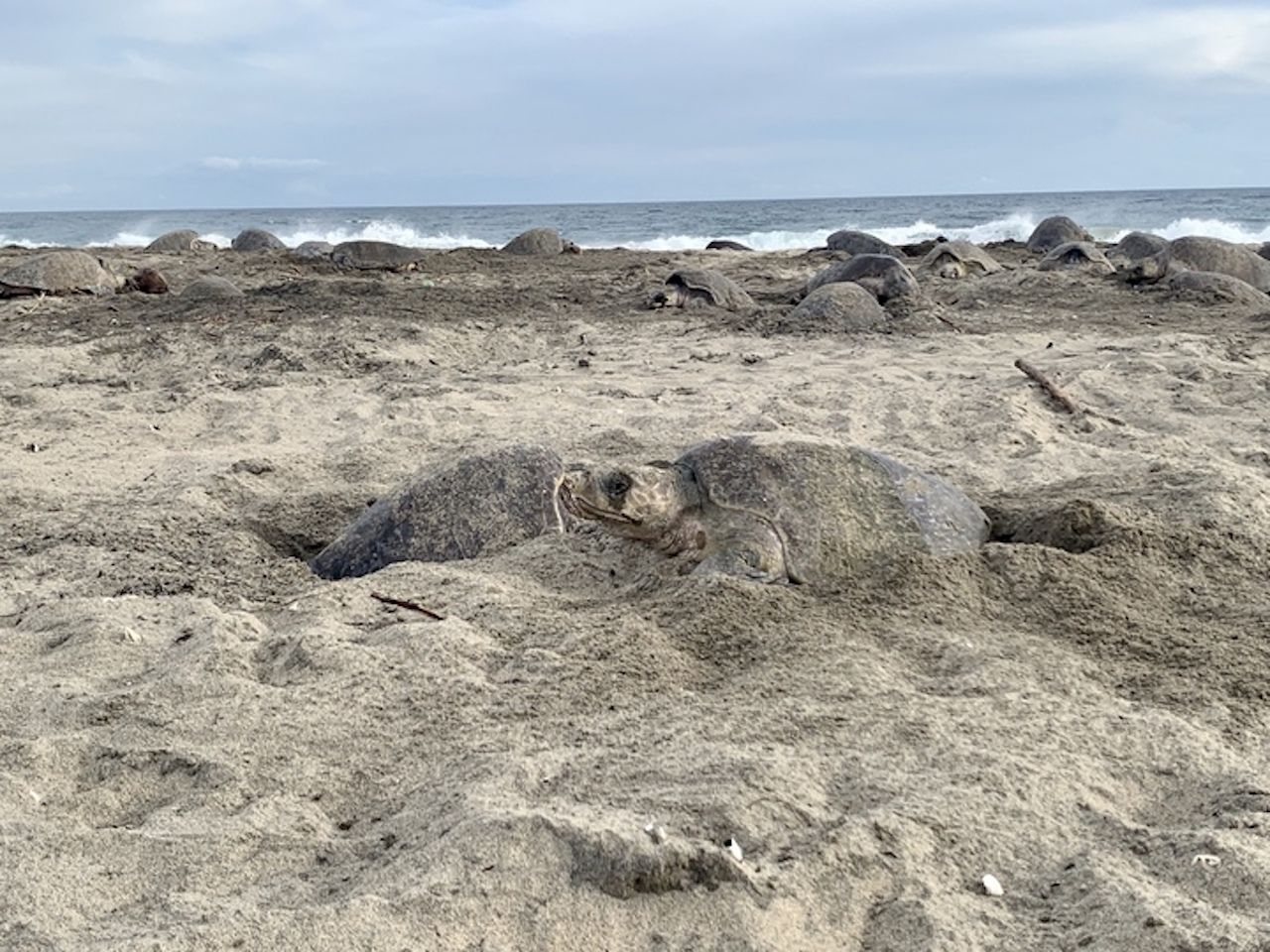 I was struck by the sheer size of the space occupied by the female sea turtles, as far as the eye could see in all directions. Moving through the area I chose my steps carefully and deliberately — not wanting to disturb the gentle dance of egg-laying, a slow rocking back and forth of the turtle’s body. The turtles, excruciatingly focused on the task at hand, paid no attention to the few onlookers that were there.

An air of slight discomfort and intense focus permeated the beach. My first question to my guide, who, like everyone at the beach witnessing this large and unabashed natural event, had tears in his eyes, was, “Does it hurt them?”

He replied that yes, the process can be painful to the turtles.

The turtles’ distress was intensified by the appearance of their own “tears” which actually helped to wash the sand from their eyes during this process. The first turtles I came upon had halfway completed their journeys and reached the more painful act of actually laying 80-150 eggs deep in the sand. Though I was able to witness the turtles participating in every element of the arribada simultaneously, it was then that I took in the entire process and route that the turtles had made to get to this point.

From ocean to nest, the turtles travel what could be thousands of miles back to their native beach. Escobilla Beach features large, surfable head-high waves crashing into its shores, filled with turtles slowly but steadily making their way to land. From my perspective, the appearance was of hundreds of surfing turtles. It was hard not to imagine their shells cracking in the crashing waves, but they managed to pass to the beach quite artfully.

Once on shore, the turtles travel up the beach until they find an open space where they use their flippers to dig a deep hole called a “body pit.” This process involves a lot of movement and convulsing by the turtle, often kicking up sand and eggs laid by other turtles perhaps days or even hours before. Once the nest is prepared to her liking, each turtle begins the intensely focused process of laying her eggs, the slow and gentle rocking I had come across. After the turtle has released all of her eggs, she again uses her body and flippers to fill the hole with gently packed sand and flatten the area so that it once again becomes just a part of the beach.

After her nest is covered and packed with sand, the turtle wastes very little time making her way directly back into the waves from which she came, disappearing into the blue ocean until she is ready to return to lay her next batch of eggs. Each turtle is on their own journey, and while these generally solitary creatures all come together for the mass-nesting, they enter and exit the ocean on their own. Because of this, if you sit still on the beach during an arribada for an hour the nesting begins to look like an orchestrated dance — each turtle playing her part, room for all. The idea that these creatures know where they come from and innately choose to recreate and honor that tradition is astounding to witness.

Reflecting on the experience 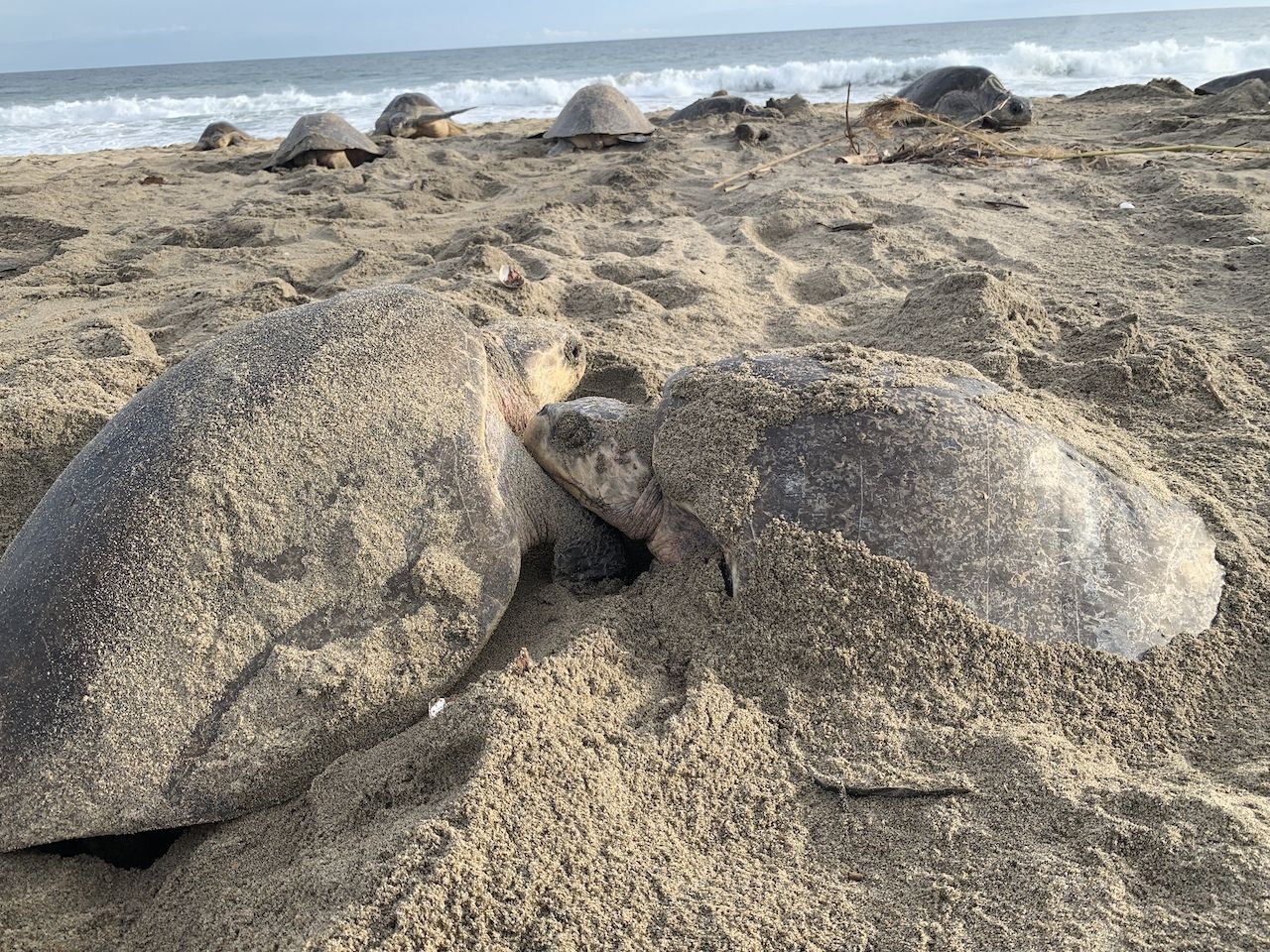 As I sat on Escobilla Beach I felt small — but I also felt a part of something. There seemed a beautiful order to the world that I didn’t fully understand and perhaps had no name. But like the turtles, I was a part of it. The continuity of knowing where you are from, leaving home, and ultimately returning spoke volumes about my own life, and I could not help but be emotionally affected by the journey of these thousands of turtles and honored to witness so intimately such an intense moment.

In roughly 45 days, the eggs will hatch nearly all at once and come pouring out of the sand like a swarm of bees, dark blue-black against the subtle browns and tans of the rocky beach. The birds will swarm and feast, and only an estimated 2 percent will make it to adulthood. Yet I had witnessed more turtles than I could ever have imagined laying their eggs and those turtles had survived the arduous process of achieving adulthood. If you have the opportunity, I highly recommend taking the time to witness this natural phenomenon up close. A lot can be learned from watching an arribada — it has taught me to have great respect for the journey and stamina of the Olive Ridley female sea turtle.

WildlifeWalk with the turtles at this sea turtle hospital in Florida
Tagged
Beaches and Islands Wildlife Mexico
What did you think of this story?
Meh
Good
Awesome