A mere hundred years ago, going to Antarctica was exclusively the realm of hardened, grizzled explorers who didn’t mind being away from home for years and losing a toe or three. Flash forward to 2019, and you’ve got ships with wine pairing dinners and butler service making dozens of trips there a year. Though getting there’s not cheap, the White Continent is now fully accessible to anyone who can afford it. But it’s still not as simple as taking a 10-day tour around the Caribbean.

Because Antarctica is truly like no place else in the world, there’s a lot you should know before going. Like how much it costs and how long it takes to get there. And if there’s Wi-Fi. We had a chance to make the voyage aboard the Silversea Silver Cloud, and here are some helpful things to know if you’re considering a cruise to Antarctica. 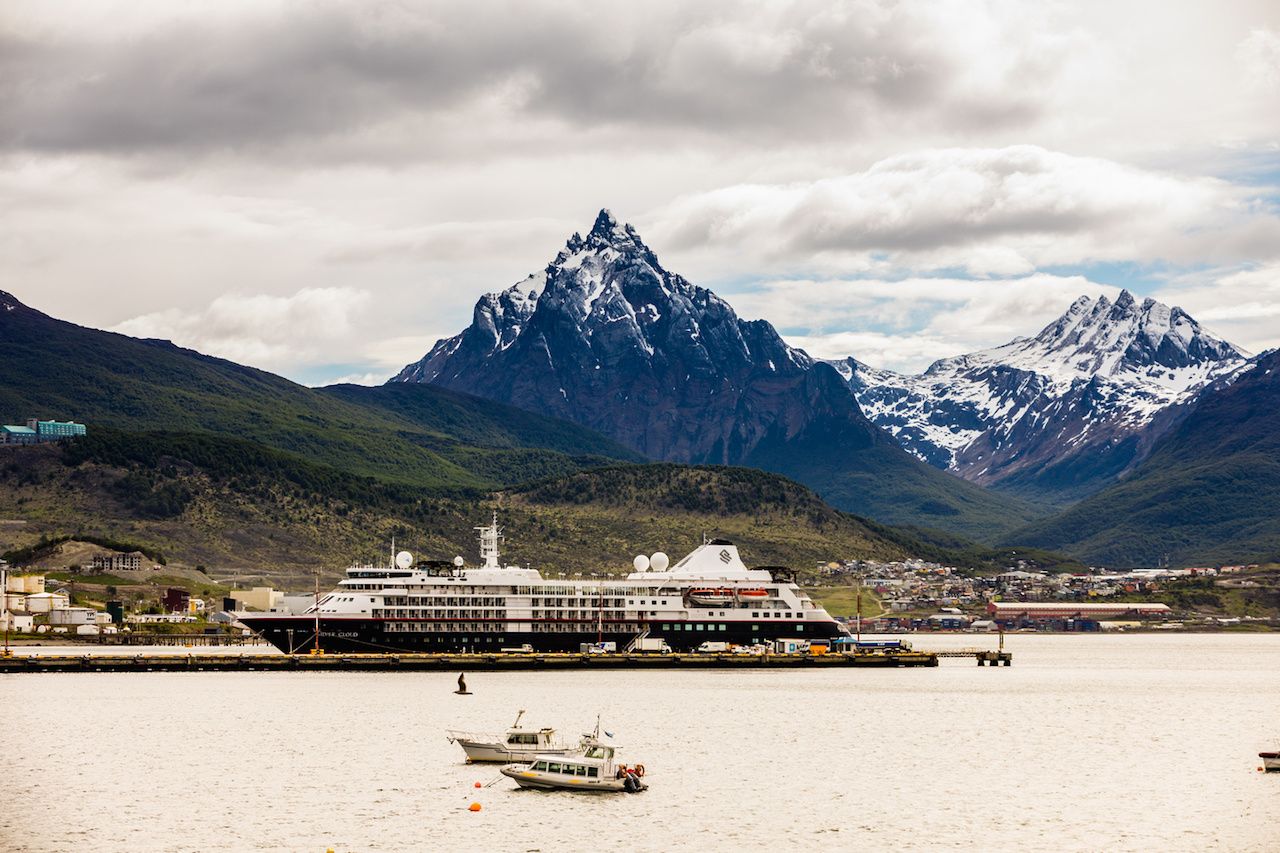 1. It’ll take two days just to get to the port of departure.

Antarctica is a loooong way down there. You might have guessed this looking at a map, but the extent of how truly remote it is won’t hit you until you take a nine- or 10-hour flight to Chile or Argentina, spend the night there, then take ANOTHER three-to-four-hour flight to Ushuaia or Punta Arenas, Chile. This is before you even start the days-long journey to the northern tip of the Antarctic Peninsula. A weekend getaway this is not. Budget at least two weeks before you even look at cruises.

2. Cruises are long. And expensive.

Retrofitting a ship to navigate the most treacherous waters in the world isn’t cheap. And there are no economies of scale on a 200-passenger ship. So while getting to Antarctica isn’t the months-long journey only feasible for large governments that it was not long ago, it’s still a major investment of money and time. The average cruise costs in the neighborhood of $1,000 a day and runs anywhere from 11 to 18 days. 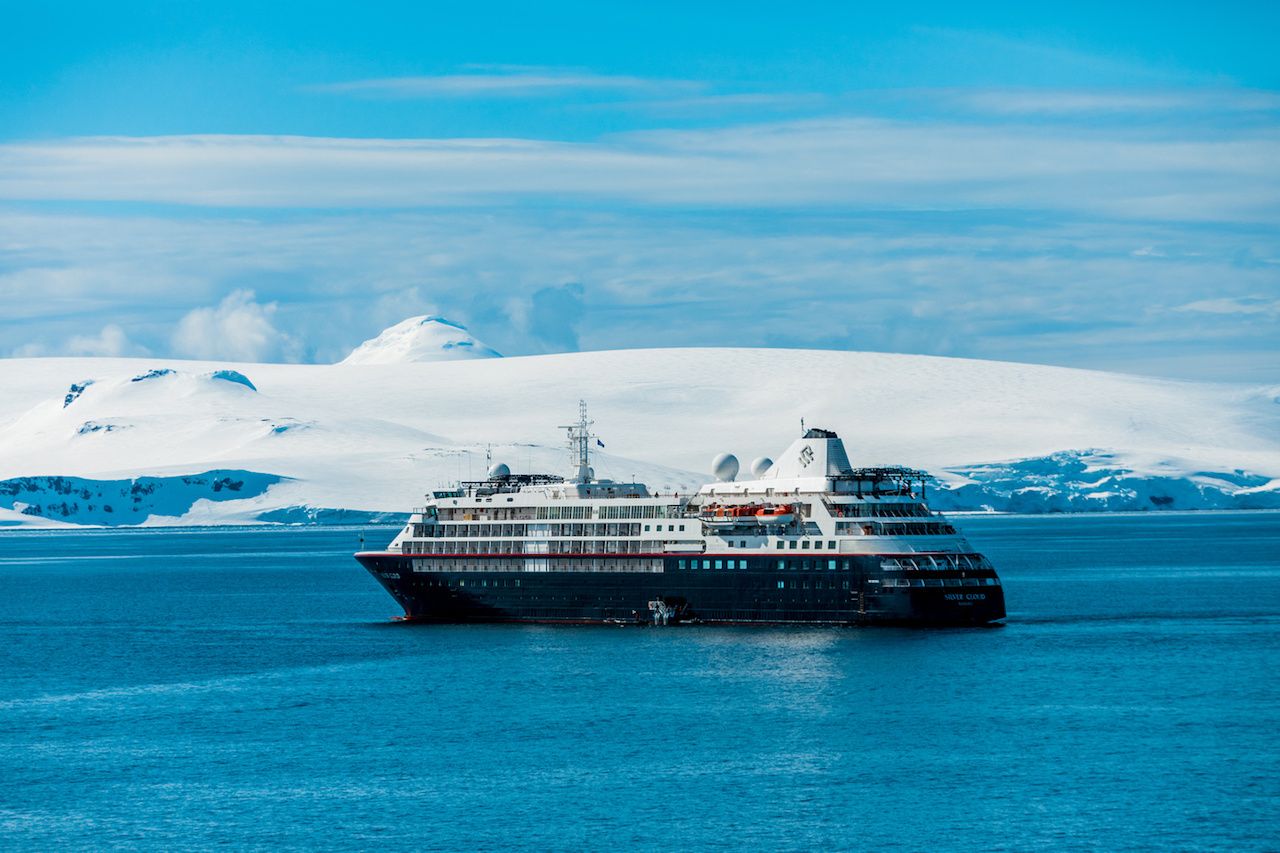 Again, and I can’t stress this enough, Antarctica is WAY the hell down there. So after you see your last spot of land in the Falkland Islands or South Georgia or somewhere else, you’ll likely go three hard days over the water before leaving the ship. Then, once you’re in Antarctica, it’s not like the port calls are full of seaside restaurants and duty-free jewelry shops. You’ll get a few hours off the ship, then it’s back on board for the rest of the day. What we’re saying is, pack some books and board games.

With so many hours on the ship, a reasonable person in 2019 might think you could whittle away the hours binging on Netflix and video chatting with friends back home. That, of course, would be assuming you have a high-speed connection. The Wi-Fi on the ships is usable, but it’s comparable to 1999 dial-up speeds. So while it’s a wonder of technology you can still answer emails at the bottom of the world, you’re not exactly gonna be streaming Narcos. 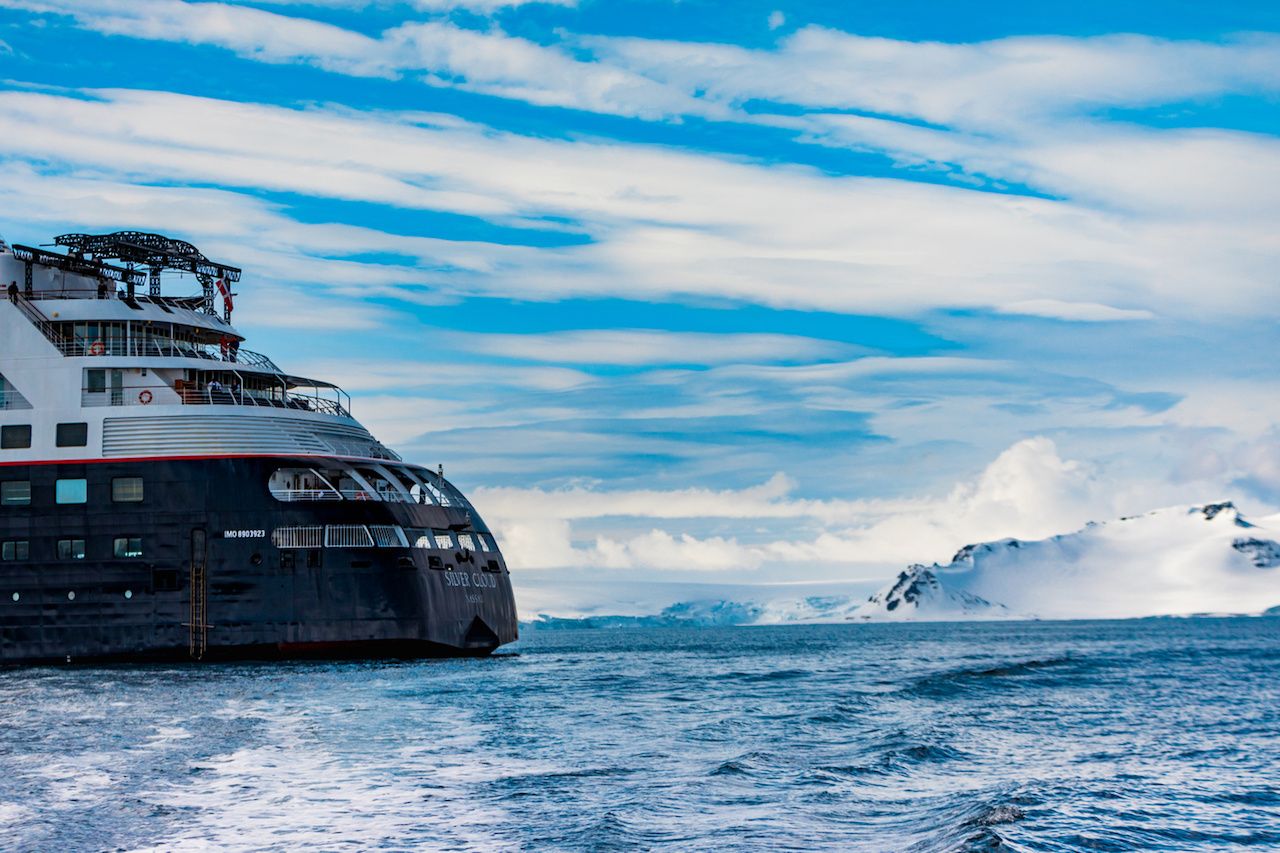 5. Drake’s Passage is no joke.

The stretch of sea between the southern islands off South America and the northern tip of Antarctica is a lovely little channel known as Drake’s Passage. Named after explorer Sir Francis, not the guy who played Wheelchair Jimmy on Degrassi. Some days it can be calm as a lake. Some days it can have 20-foot swells. Most days it’s somewhere in between, but you’ll likely spend the better part of the 48-hour journey through it stumbling through the hallways of your ship like it’s the French Quarter at 4:00 AM.

The gym might be closed because weights fall off the shelves, and some food service might be limited if the seas are too rough. If you’re easily seasick, you will not be leaving your room for the duration of Drake’s Passage. Then you get to do it all again on the way back. Bring Dramamine and seasick wristbands.

Antarctica isn’t owned by any one country, but visitation is governed by the International Association of Antarctic Tour Operators (IAATO), which sets rules and regulations to preserve the continent. Among them is that only a certain number of people may be ashore at any one spot in Antarctica. This means you and your shipmates will go ashore in groups, and only for a limited time. This way everyone gets a chance to play in the snow and take penguin selfies, if only for a couple of hours. The downside is the ratio of hours traveled to time on land is probably the shortest of anywhere in the world. 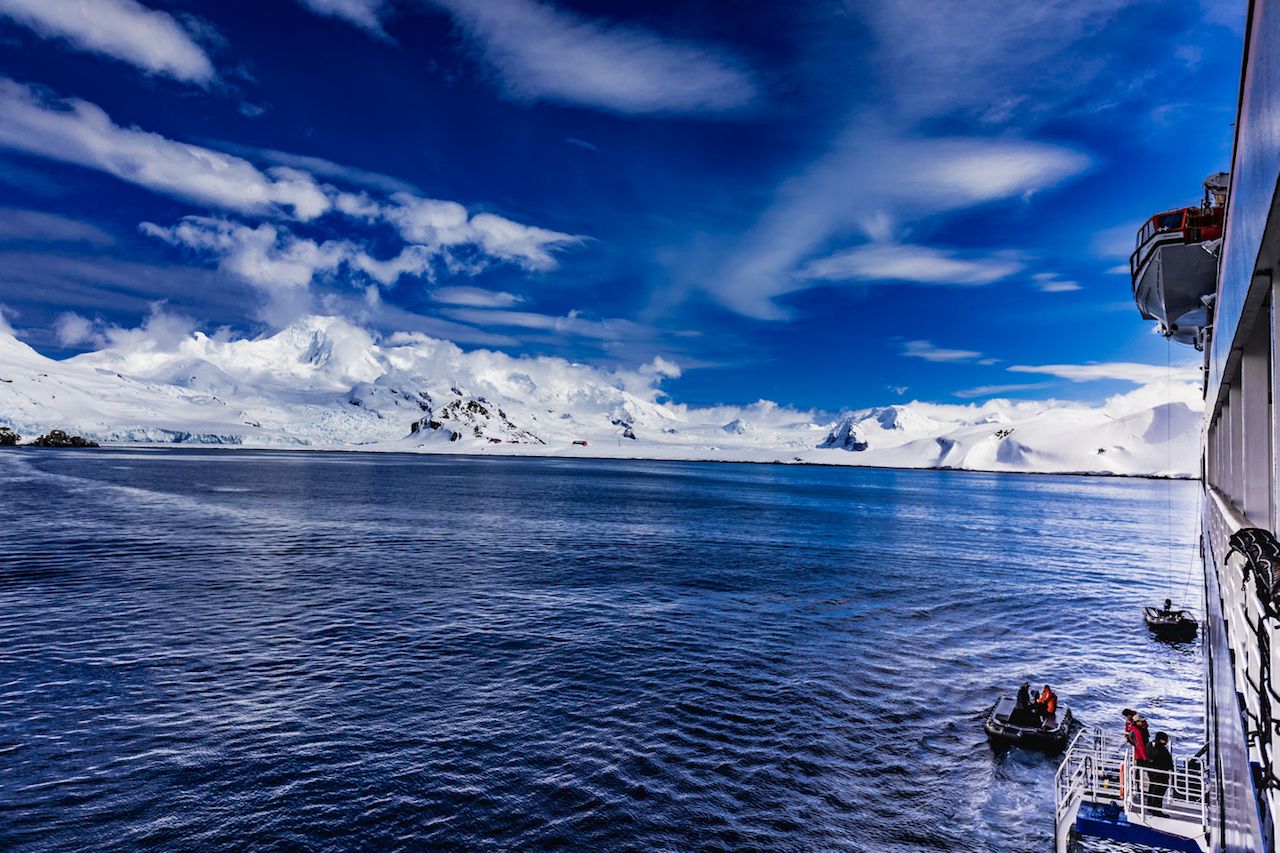 7. Color in Antarctica is all or nothing.

After a few days at sea you’ll really start to appreciate how excited pirates in those movies get when they spot a palm tree and yell, “Land, ho!” That first iceberg you see out your cabin window will be a marvel, and if the clouds stay overhead, you’ll spend your trip in an eerie black and white landscape of towering ice and steely water. However, if the sun comes out, it’s far more intense than it is up north and makes the sky and water a brilliantly intense blue. It also makes the snow a blinding white, and the specs of orange and red on the wildlife shine.

Even though it might be tough for anything to grow in the harsh conditions of Antarctica, nobody is taking the chance. Before you set foot on Antarctic soil, all clothes you plan to wear ashore must undergo an agricultural inspection, ensuring you’re not inadvertently transporting any seeds or other organic life onto the continent. You also have to wear special boots that are only worn ashore and are kept in a separate changing room. 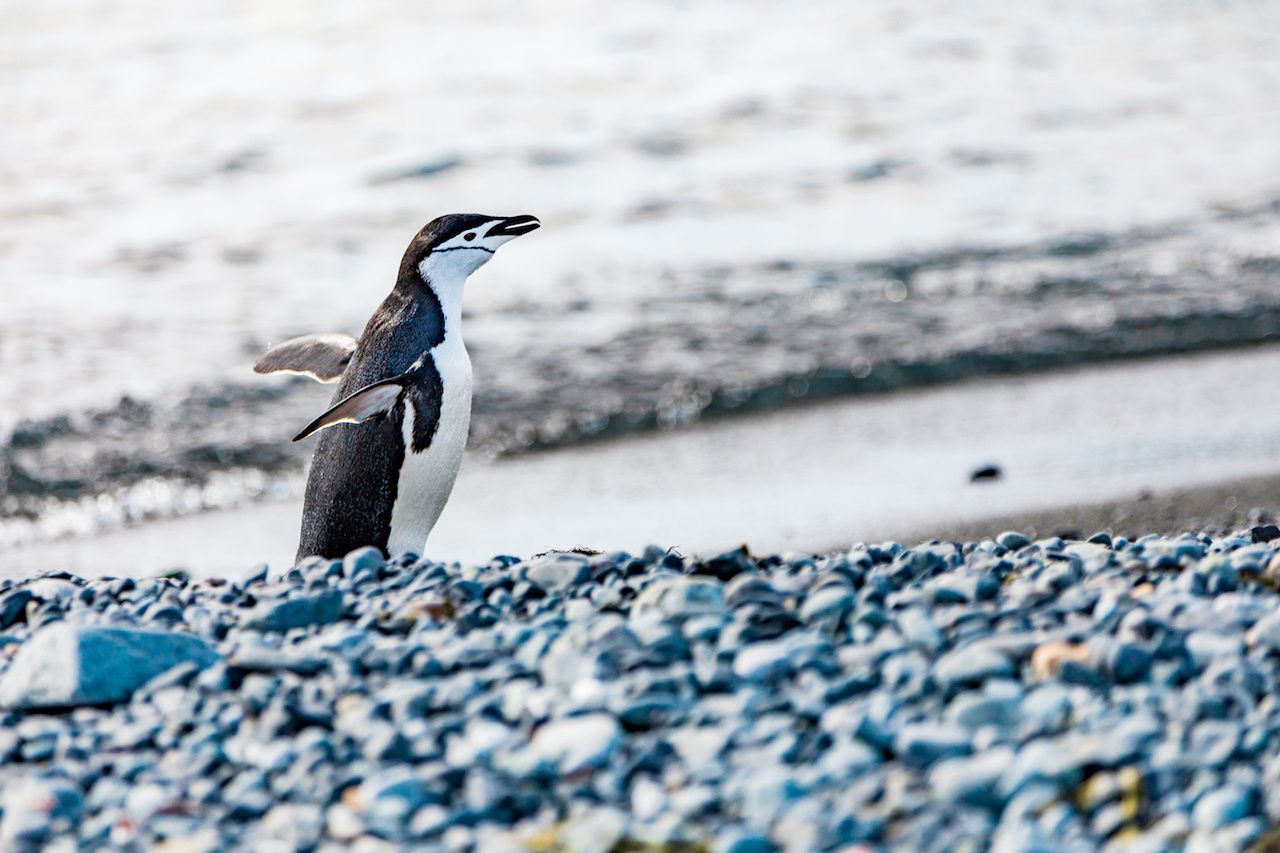 9. Animals are not afraid of you.

Once ashore, you’ll encounter large colonies of penguins and sporadic seals lazing around the ice packs. Because they rarely see humans, they don’t fear us and as such will waddle or slide right up to you out of brazen curiosity. The general rule is to stay 15 feet away at all time, but if a penguin wants to follow you around, you don’t have to run.

The first day, they’re adorable. By day four you’ll be wondering why they all live on top of their own shit and will start complaining about the smell. 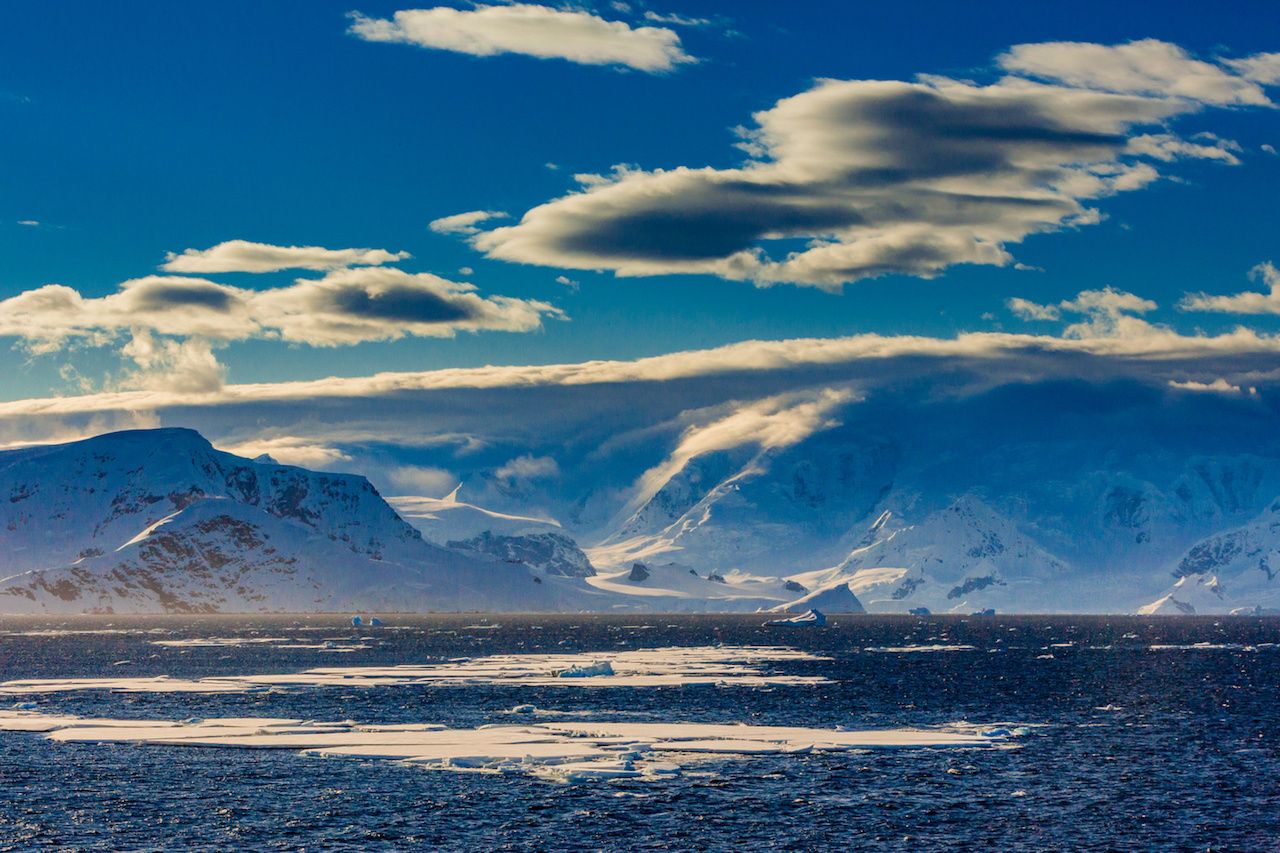 11. Antarctica is full of mountains.

The vision many have of Antarctica is a little like North Dakota with penguins. Big, flat, barren, and snowy. But the mountains along the peninsula and the islands that surround it are breathtaking white peaks, like someone dropped the Andes in the middle of the ocean. The scenery is like nothing else, and even simply taking a Zodiac ride around the water is one of the most magical experiences in the world.

12. Your itinerary is flexible.

The weather in Antarctica can change in seconds. It’s a place where you wake up to perfect sunshine, and 20 minutes later you’re in the middle of a blizzard. This means you’ll get to do cool stuff like sail through frozen ocean, but it also means your schedule will never be certain. Your landing destination may be inaccessible due to ice or wind, and your Antarctic shore excursion might be replaced by an afternoon snowball fight on the pool deck. Odds are you’ll get to shore at least a few times, but it might not be as many as you’d hoped. 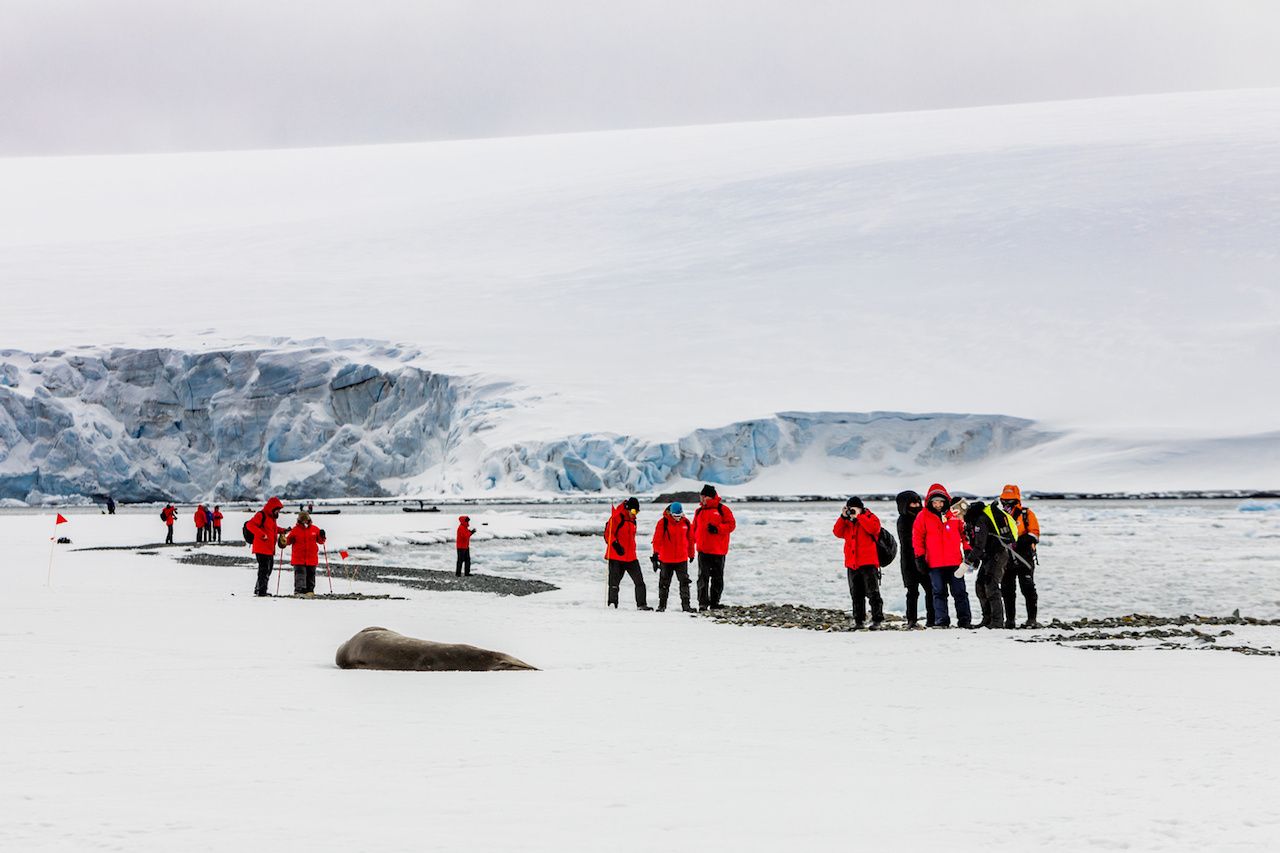 As part of IAATO’s efforts to preserve the land and animals of Antarctica, guides mark very specific trails you must stay on when you land. This is done for a number of reasons, among them so you don’t leave deep footprints that unwitting penguins fall into. You’ll have plenty of space to hike around, but you will be with your shipmates the entire time. Privacy hours will have to be in your room onboard.

14. You may not step on mainland Antarctica… but it still counts!

Most Antarctic cruises take you to the Antarctic Peninsula, which if you look at a map of the continent is a little like Antarctica’s Florida. Like Florida, it has a number of barrier islands off the coast that are popular landing spots for cruise ships. Because weather sometimes prohibits mainland landings on the peninsula, you may only trek on the mountainous islands offshore. Some people think this means they haven’t really been to Antarctica and are disappointed they dropped the price of a Kia to only set foot on a barrier island. But you’d be hard-pressed to find anyone who’s been to Key West and said they didn’t really go to Florida. 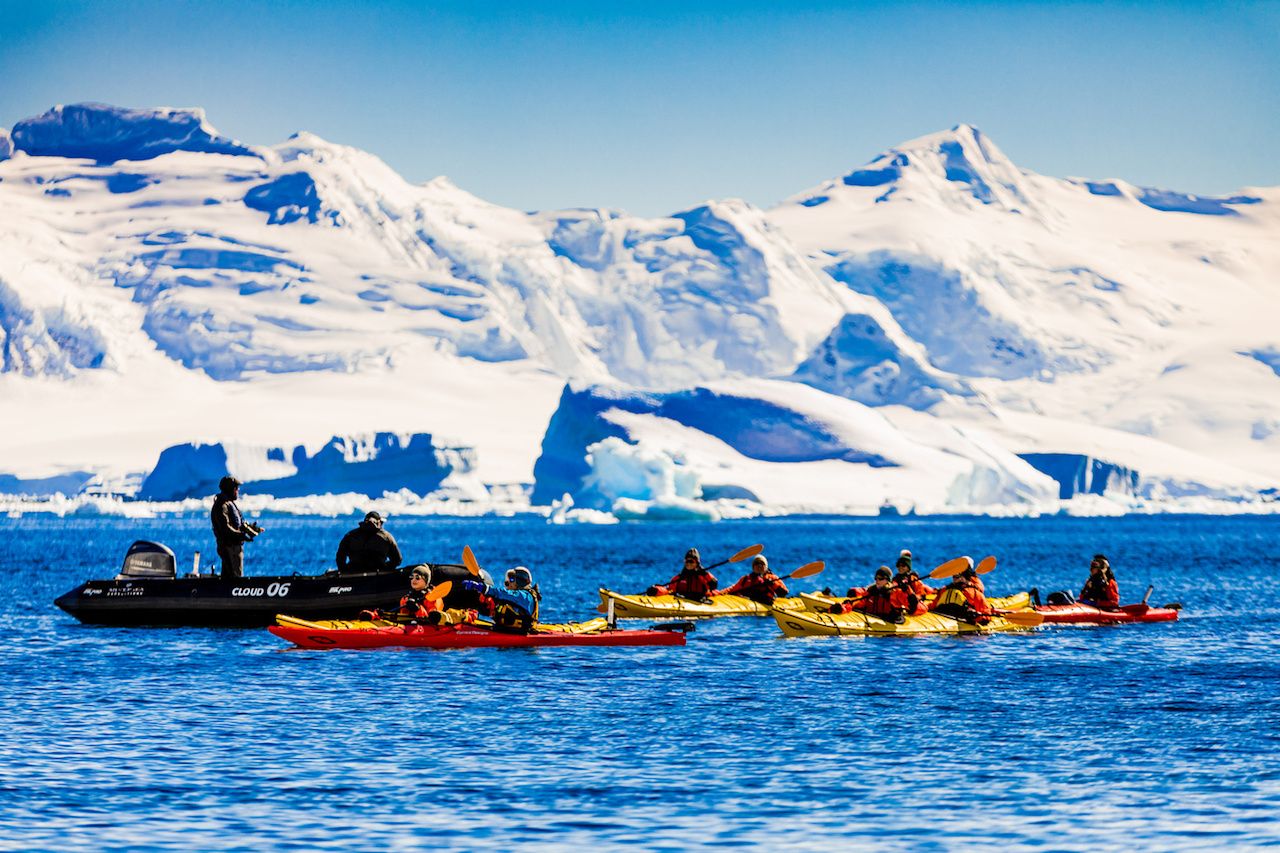 15. The water in Antarctica is insanely clear.

The current around the Antarctic Ocean is part of what causes those nasty waves in Drake’s Passage. It also does an extremely effective job of keeping all the crap in the rest of the world’s oceans away from Antarctica, which means the water is almost perfectly clear, so you can literally look down from your balcony onto penguins swimming alongside the ship and dolphins speeding right beside them.

Granted, it’s not a tropical vacation. But Antarctica in summer isn’t terrifyingly cold either. If the sun comes out, you might even have days in the high 30s or low 40s. Colder days can drop into single digits. But it’s more like a bad day in Chicago than it is, say, winter in Siberia. Bring plenty of long underwear, winter clothes, and a good coat. But don’t fear the cold if you hail from somewhere warm. 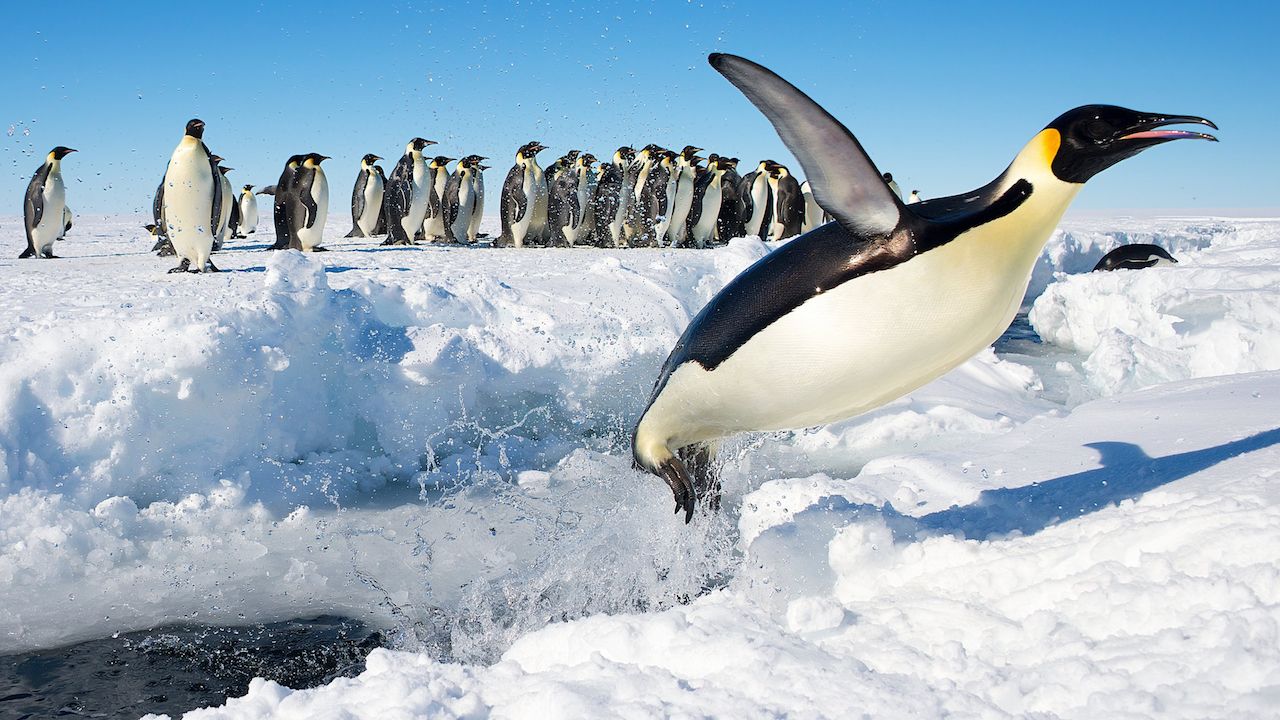 17. You absolutely must do the “polar plunge.”

Most ships offer a “polar plunge,” where daring passengers can jump in the Antarctic Ocean for a few seconds from the side of the ship. Water is generally sub-freezing, and by the time you swim back to the ladder, you won’t be able to feel your feet. But it’s a once in a lifetime opportunity, almost-completely-safe with rescue rafts and medical personnel, and you’ll have a nice warm Jacuzzi to warm up in after. 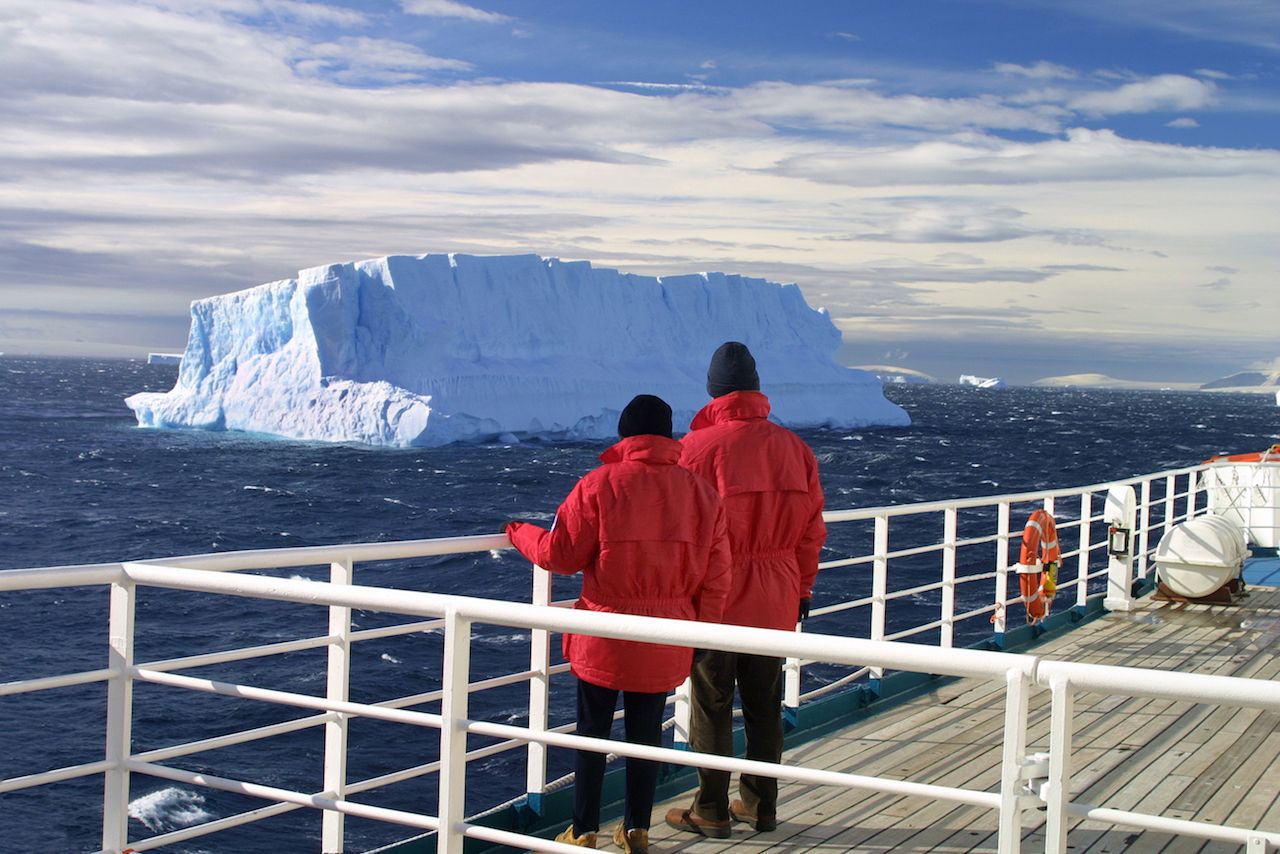 18. If you’ve got the money, it’s absolutely worth it.

Despite the rough seas, limited time ashore, and spotty Wi-Fi, going to Antarctica is the rare experience that can’t be compared to anything else. It’s the last truly wild place in the world, with no government, no society, and almost no contact with the outside world. It’s remote, extreme, and beautiful. And if you can afford the trip down, you’ll have no regrets coming back.

CruisesHere’s What Life Is Like Aboard the Most Luxurious Ship Cruising Antarctica
Tagged
Cruises Insider Guides Antarctica
What did you think of this story?
Meh
Good
Awesome