Colin O’Brady would’ve had a much better time if he’d ended each day eating popcorn in a hot tub.

Not to say the man who recently completed the first unassisted trek of Antarctica didn’t enjoy himself. Just that his trip probably would have been better if he could have spent his downtime soaking in hot water and enjoying a hot buttery snack.

Such is the life if you opt to see Antarctica aboard the most luxurious ship to ever hit the White Continent. The Silversea Silver Cloud erases all Shackleford-era memories of rampant frostbite and minimalist survival, replacing it with butlers, hot tubs, and imported wine.

The Silver Cloud is a 515-foot, 254-passenger cruise ship that underwent a $40 million renovation to reinvent itself as an ice-class vessel. This means it’s equipped with underwater ice-class bulbs for polar water navigation, sonar to detect pesky hazards like icebergs, and stabilizers to handle the sometimes 20-foot swells, so you won’t be recreating a Titanic first-class voyage anytime soon.

When it began going to Antarctica in 2017, it effectively became the Rolls Royce of the Arctic Ocean. 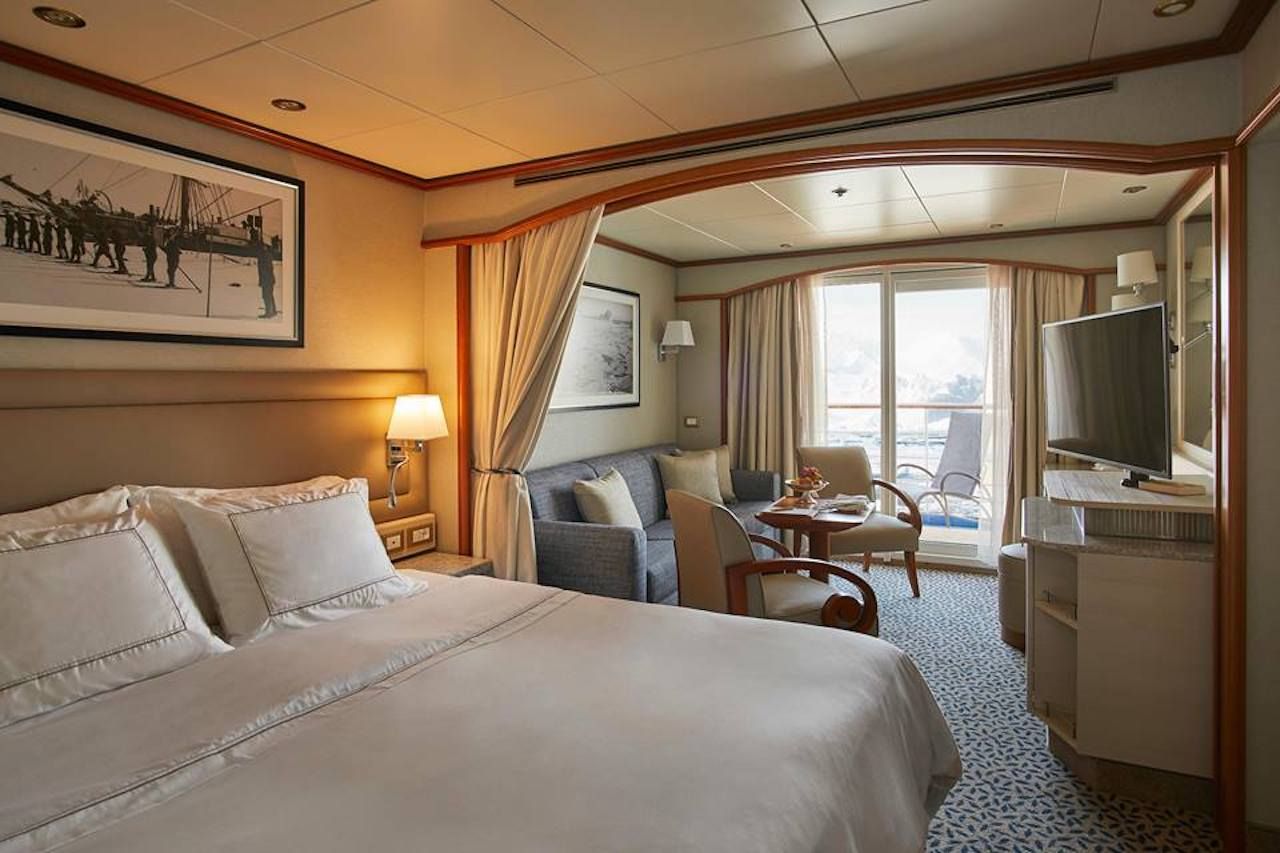 Rooms aboard the Silver Cloud are all spacious suites, which on a cruise ship means they’re about the size of your average room at the downtown Hilton. Each suite has an ocean view, most with balconies, equipped with plush robes and Bulgari bath amenities. There’s a pillow menu and a mini-fridge your personal butler stocks with whatever you ask for.

The Silver Cloud has a full gym with group exercise classes, a running track around the top of the ship, and outdoor jacuzzis from which to enjoy the towering mountains made of ice and albatross soaring overhead.

Silversea also employs an impressive team of guides and experts who take time each day to explain to the 200-or-so guests the importance of what they’re seeing. Ornithologists give lectures on the penguins, albatross, and other birds. Geologists explained the origin of the continent. Historians tell you about the men who first set foot here and the hardships they faced — often while you sip on a nice cold glass of rosé. 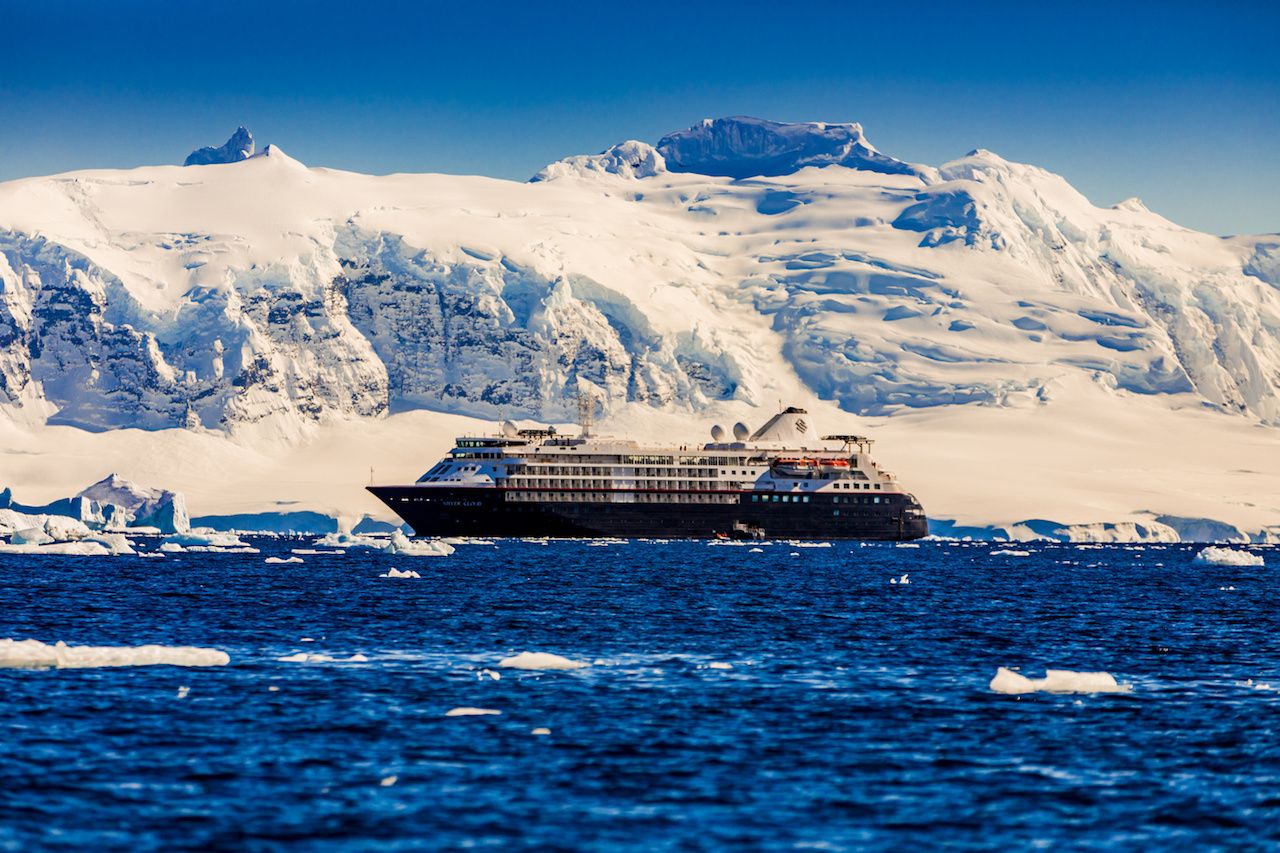 A treacherous journey made downright pleasant

Going to Antarctica isn’t like taking a weekend hop to Nassau. It’s the end of the Earth, and the fact that you can make it there and back in 11 days is a testament to human technology. The fact that it has operative WiFi is downright mind-blowing.

But it’s still not easy.

While the Silver Cloud makes some initial wildlife viewing stops in spots like the Falklands and South Georgia Island, you’ll still spend two to three days in each direction rolling through Drake’s Passage. Which is not for the faint of heart — or stomach.

For the next two days, your world is a floating see-saw. You walk down the narrow hallways of the ship bouncing off the walls like you’re stumbling home down Bourbon Street. The gym, when it’s open, affords you the chance to run rolling hills on a treadmill without pushing a button. Waiters masterfully balance trays of food at dinner while the sea reaches over the windows on either side of the dining room. 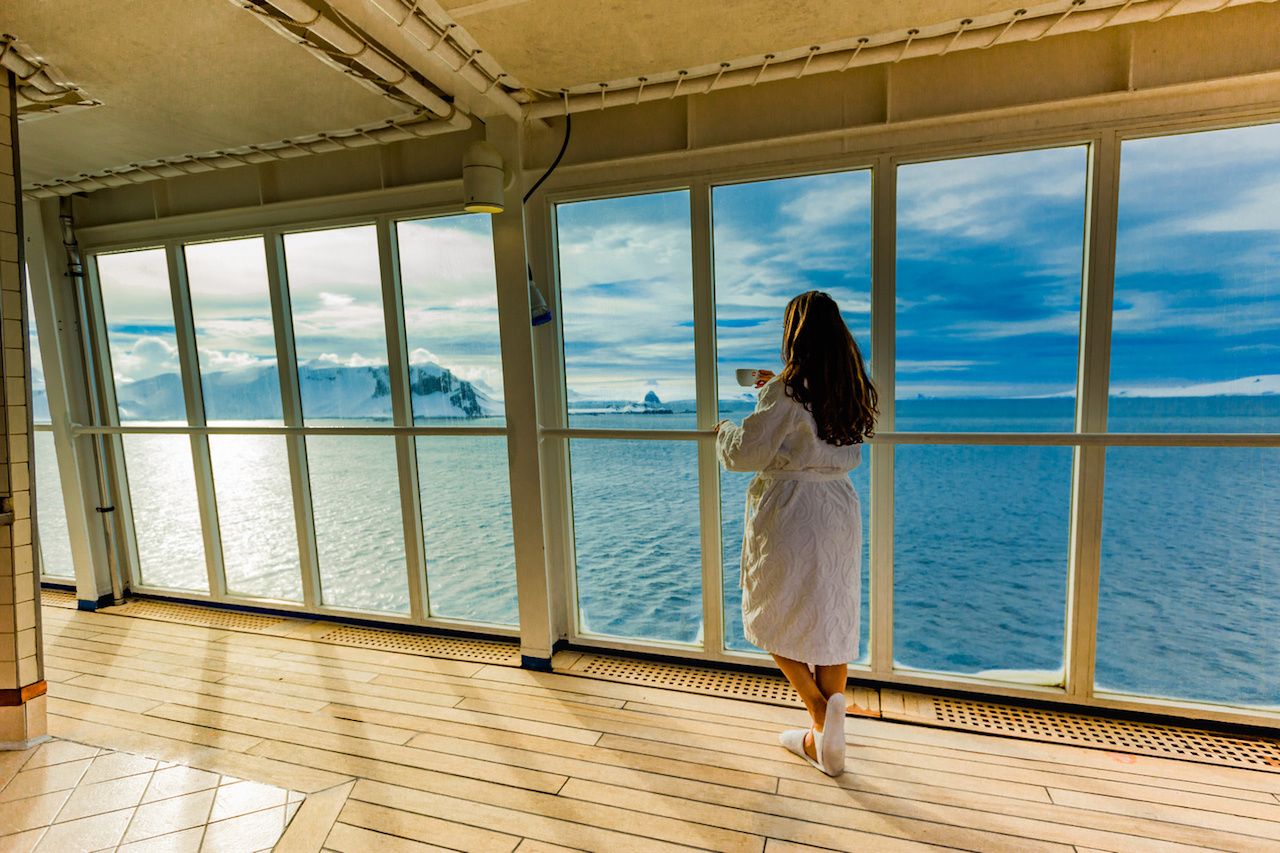 While no level of pampering can take away the nonstop listing in Drake’s 12-to-20-foot swells, it can almost feel soothing when you’re lying on a memory foam mattress. And if you need some ginger ale, it’s only a phone call away.

If you are inclined to seasickness, though, we suggest buying Dramamine in bulk at Costco before you go. Some guests aren’t seen until the passage is over.

On the fourth morning of the voyage, you’ll order a bacon-and-cheese omelet with a couple of mimosas to your stateroom, and as you enjoy it looking out your balcony, you’ll see a large white object in the distance. This glacier — whichever one it may be — signals that you’ve finally arrived in Antarctica. 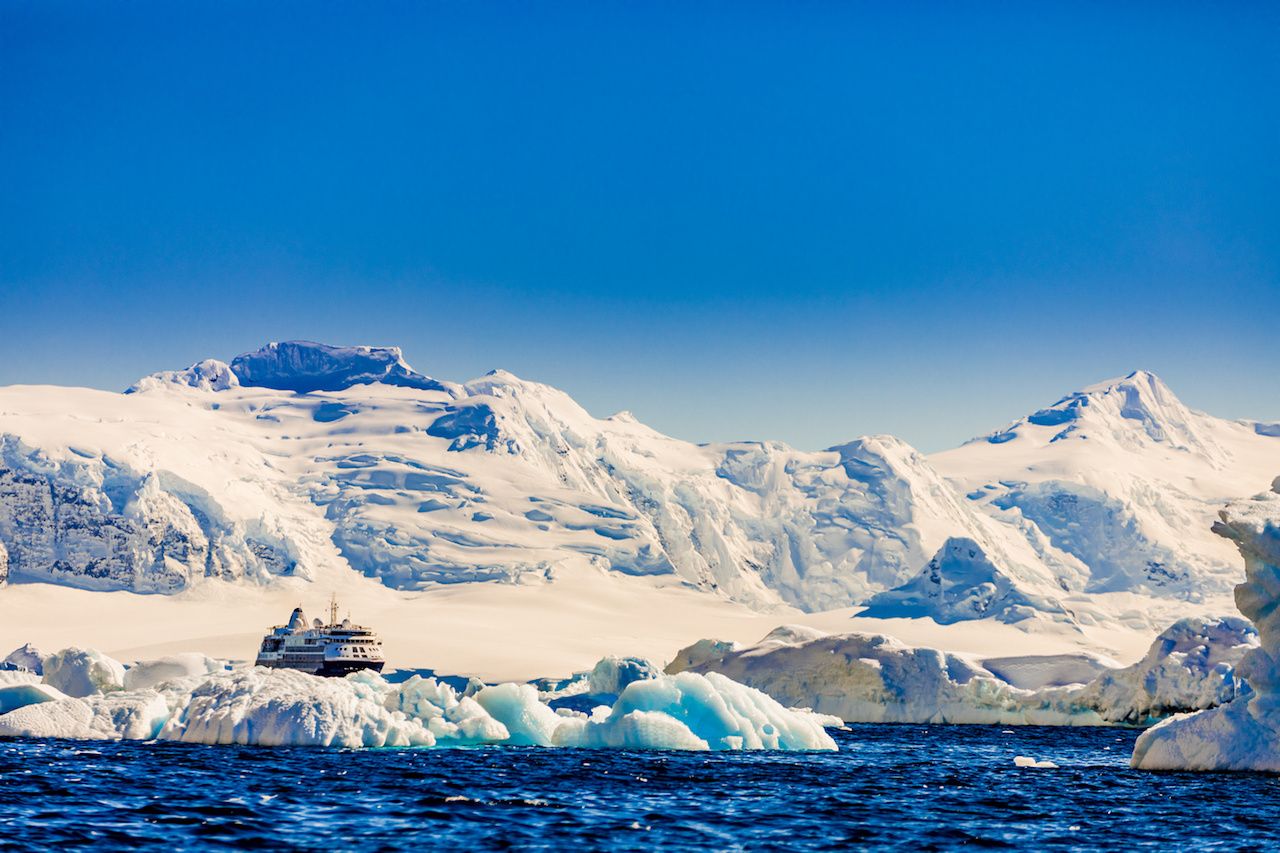 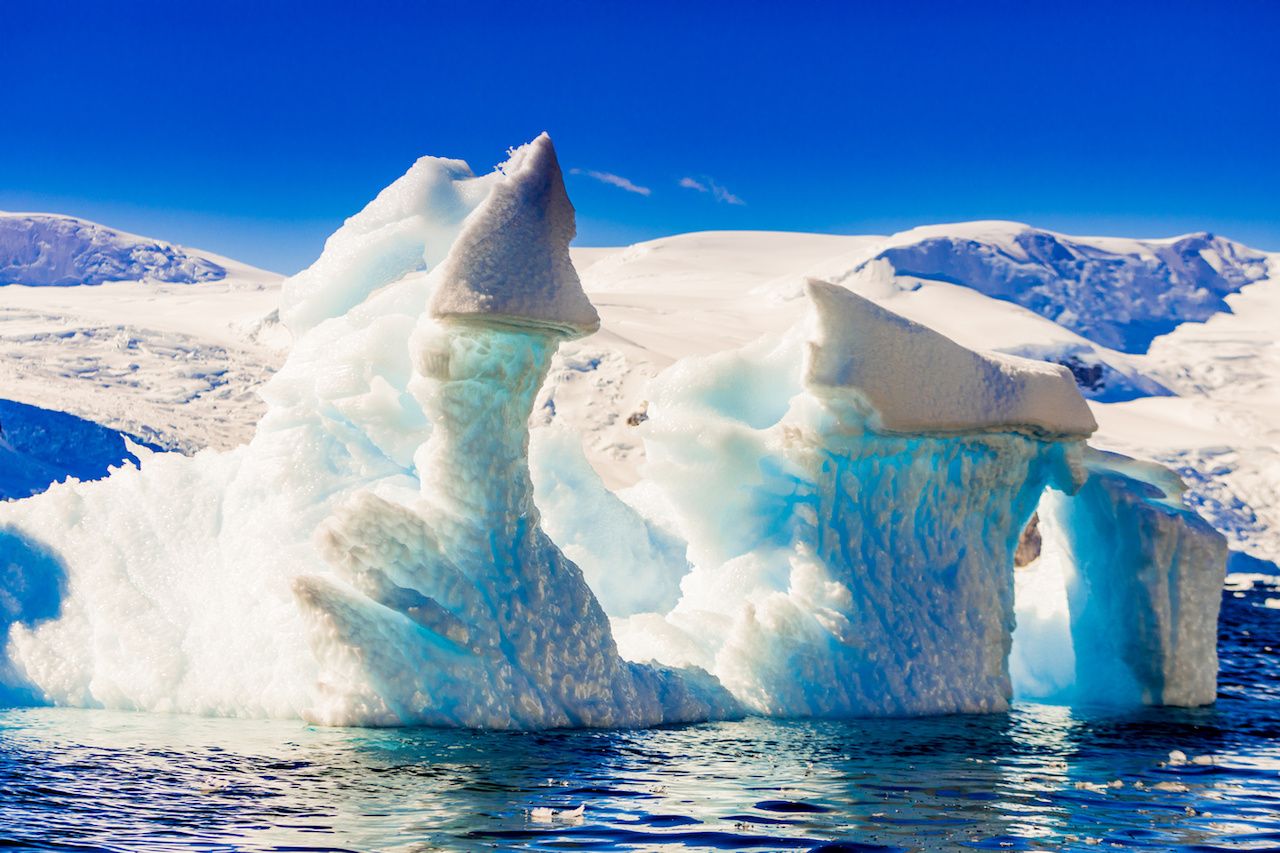 Like a scene from a Disney movie, you step out onto your balcony to get a better look and see dozens of what look like flying fish jumping out of the water. But as they swim closer to the ship, you realize they’re actually penguins, leaping out of their swimming formations to welcome you to their home.

The ship puts down anchor in a bay that looks like an icebound fantasy you didn’t even know you had. The images most conjure of the White Continent are of an unapologetic wasteland of black rock and white snow, which, while fascinating to visit, isn’t exactly postcard material. But your first stop on the peninsula proves completely otherwise.

Epic jagged mountains stick straight up out of clear blue water, covered in snow that’s painfully bright under the polar sun. The waters are clearer than even the most pristine parts of the Mediterranean — ocean protected from Earth’s pollution by currents circling the continent. An afternoon run around the albeit-short running track on the top deck has you stopping every few laps to get another picture of the imposing ice mountains against the bright blue sky. 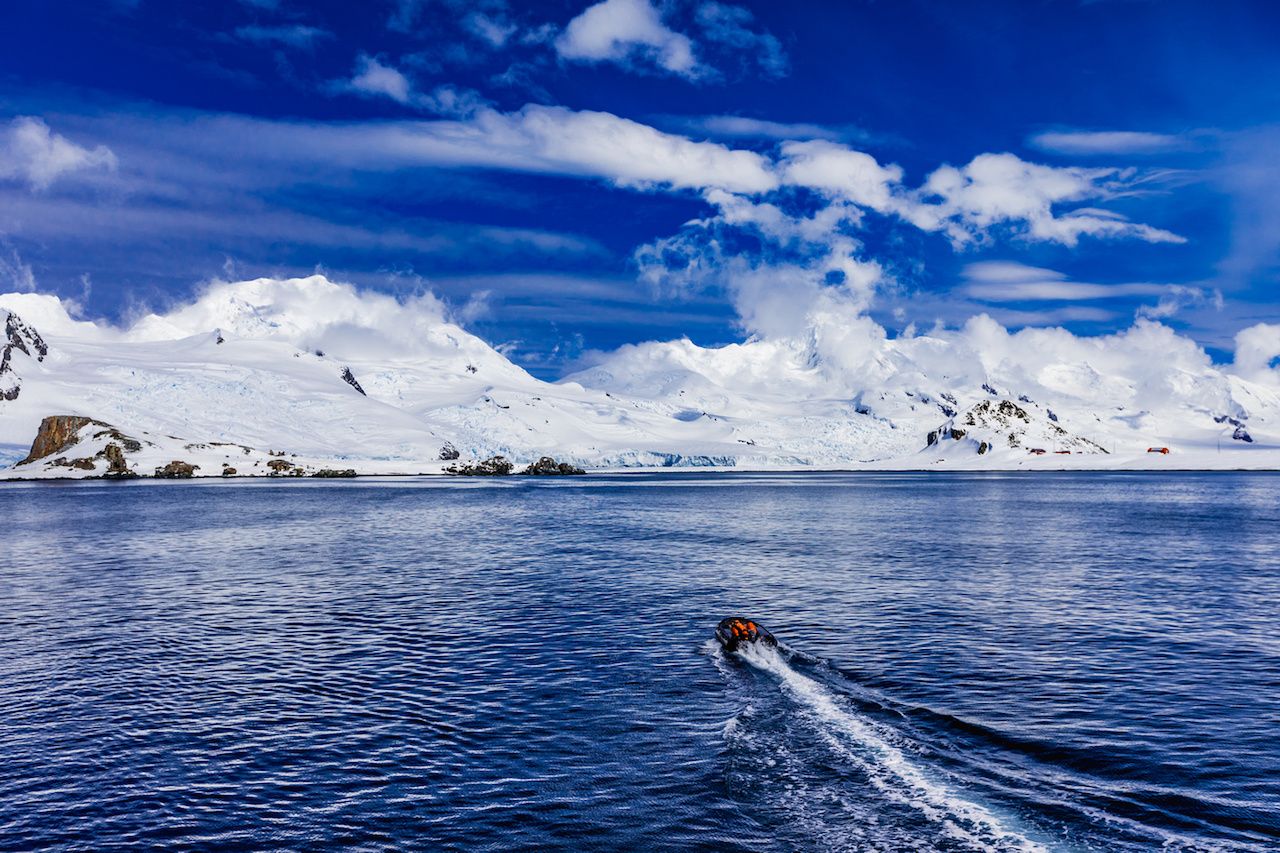 Before going ashore you’re required to submit any clothing you’d wear to agricultural inspection, ensuring you’re not transporting any invasive species. You’re also warned to stay on the marked walking paths so as not to create deep footprints that unwitting penguins might fall into when waddling along. People must also stay 15 feet from all wildlife at all times.

You take a motorized Zodiac raft across the clear water to the shoreline and are immediately greeted by about half a dozen penguins. The animals in Antarctica don’t fear humans since most don’t do much other than take pictures. 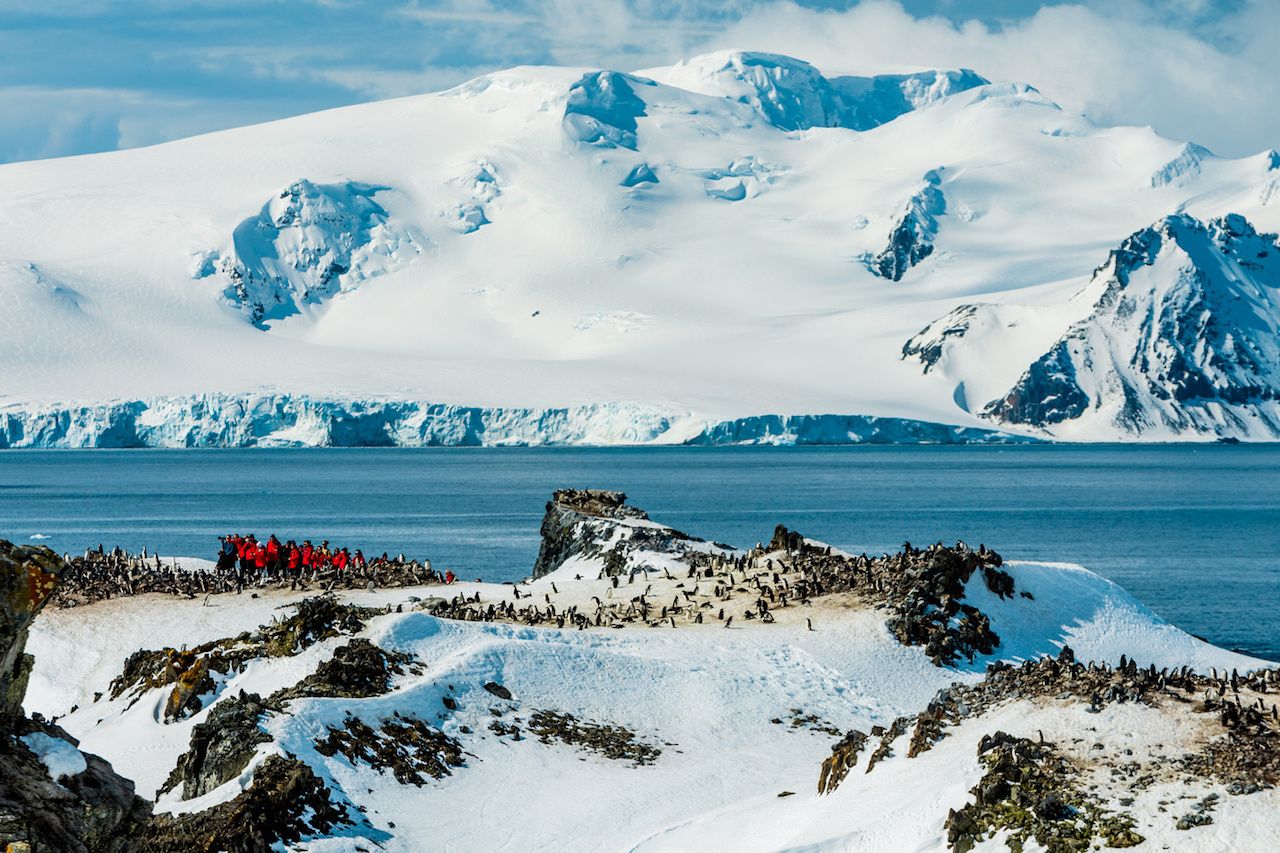 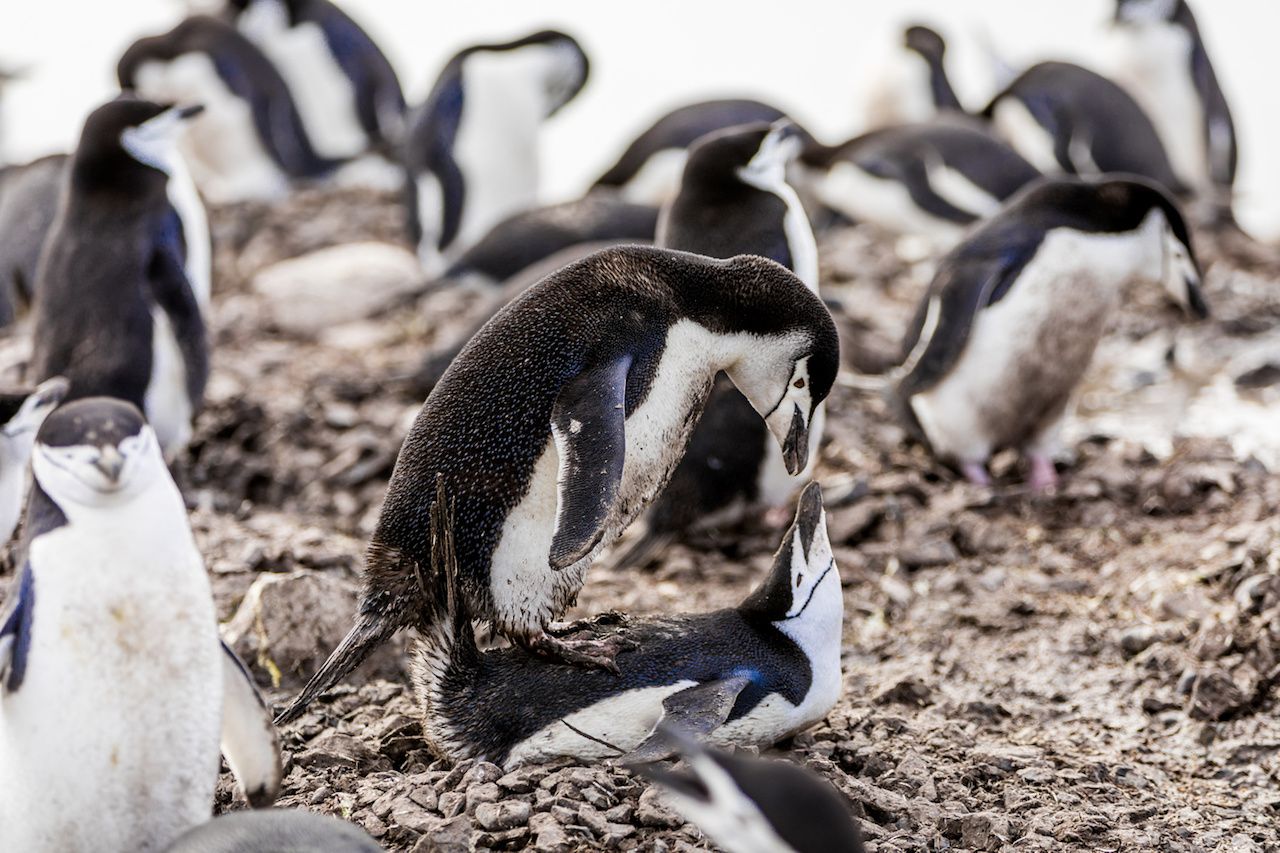 Penguins, cute as they are, smell horrific. Looking at a colony onshore, the first thing you notice is how the ground under them is a deep, dark brown against the white of land. This isn’t melted snow. This is sometimes two or three acres of penguin shit that they all live on top of. Somehow Disney left this out of Happy Feet.

If you can stand the smell, the penguins will literally walk right up to you, but because you’re forbidden from feeding them, they won’t ask for much. They waddle along and slide down the mountains, and for that brief moment, you’re envious of their carefree summer vacations on land. 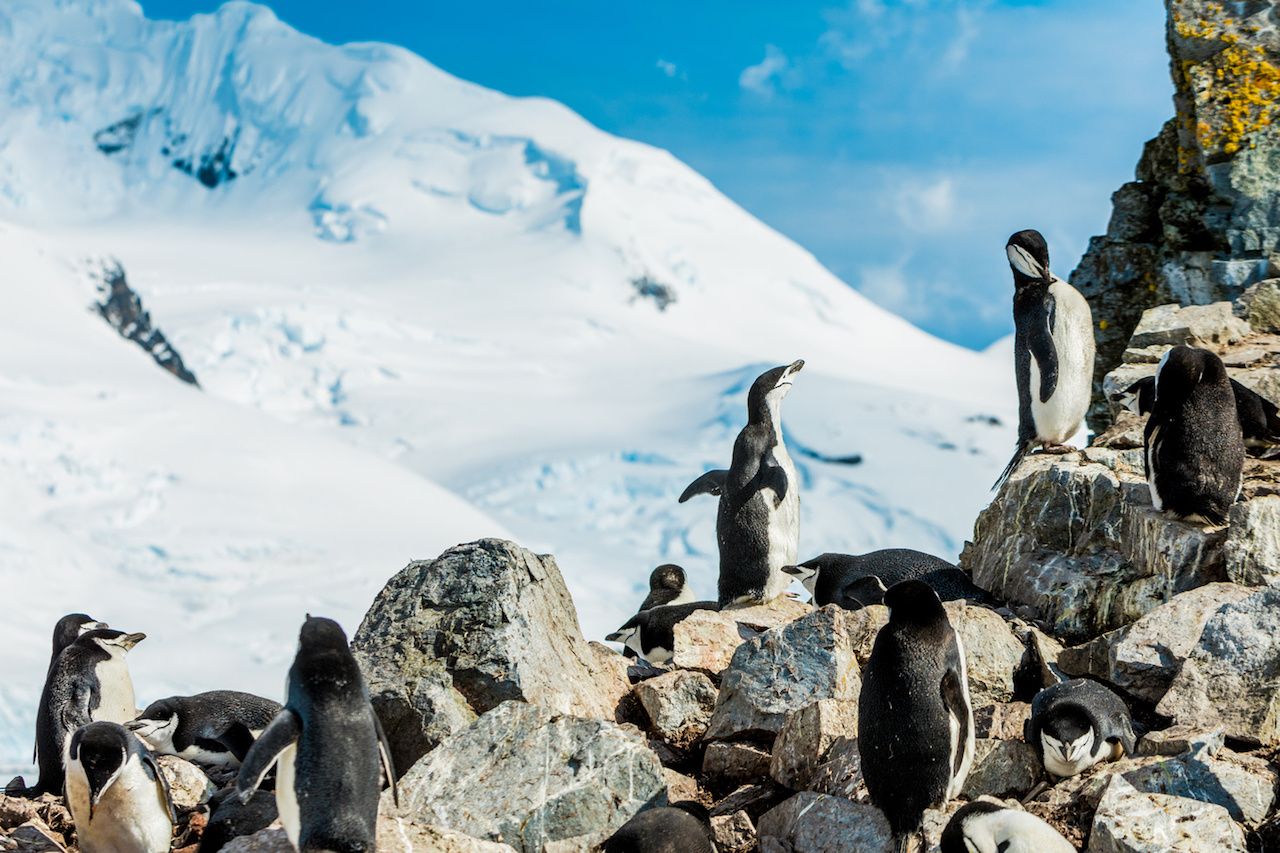 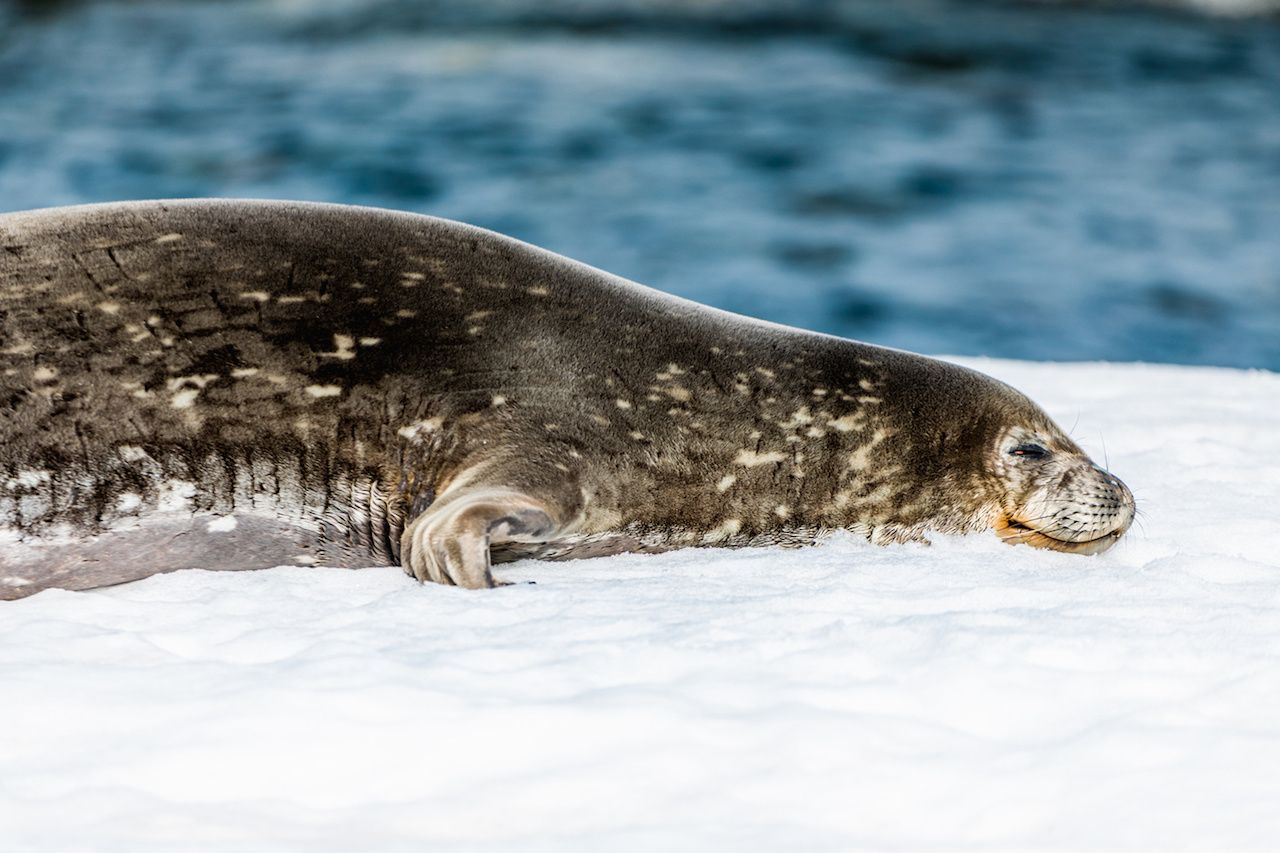 The expedition staff stands throughout the walking paths to answer any questions you have and identify the wildlife. It’s like having your own personal Animal Planet along for the ride. 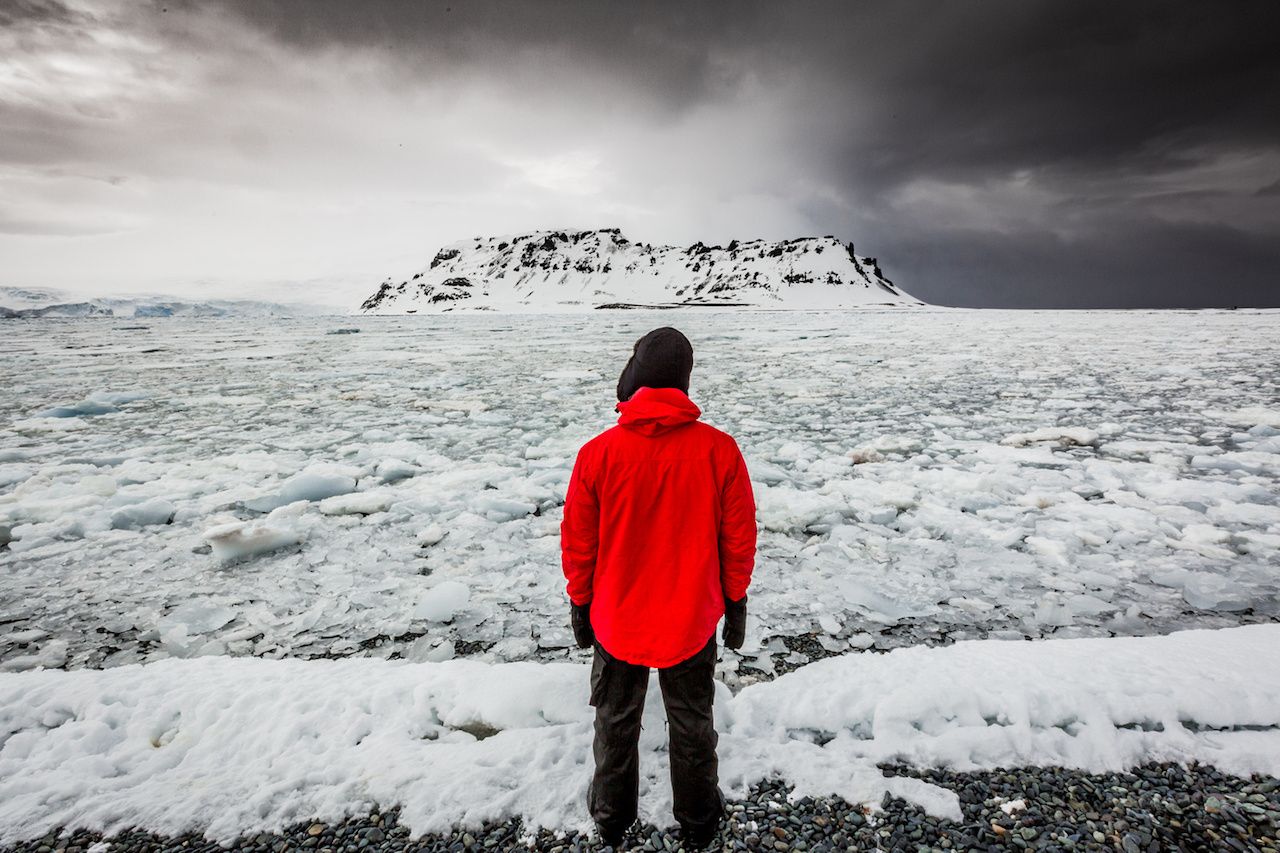 Life on the ship is the nicest resort you’ll ever stay at.

Back onboard, dinner is an event in and of itself. The Silver Cloud boasts four restaurants, including an outdoor hot stone grill which, while cold, is probably your only chance to ever dine al fresco in Antarctica. Expedition leaders host tables in the main dining room, where on select nights you’ll get a private audience with the resident experts.

After dinner, you can retire to one of the lounges, where all the drinks are included and expedition leaders hold court for you and your fellow guests. You may find yourself having an hours-long conversation with an onboard historian about the politics that shaped Antarctic tourism or playing Never Have I Ever with slightly uncomfortable guides who look at you a little funny the next day. 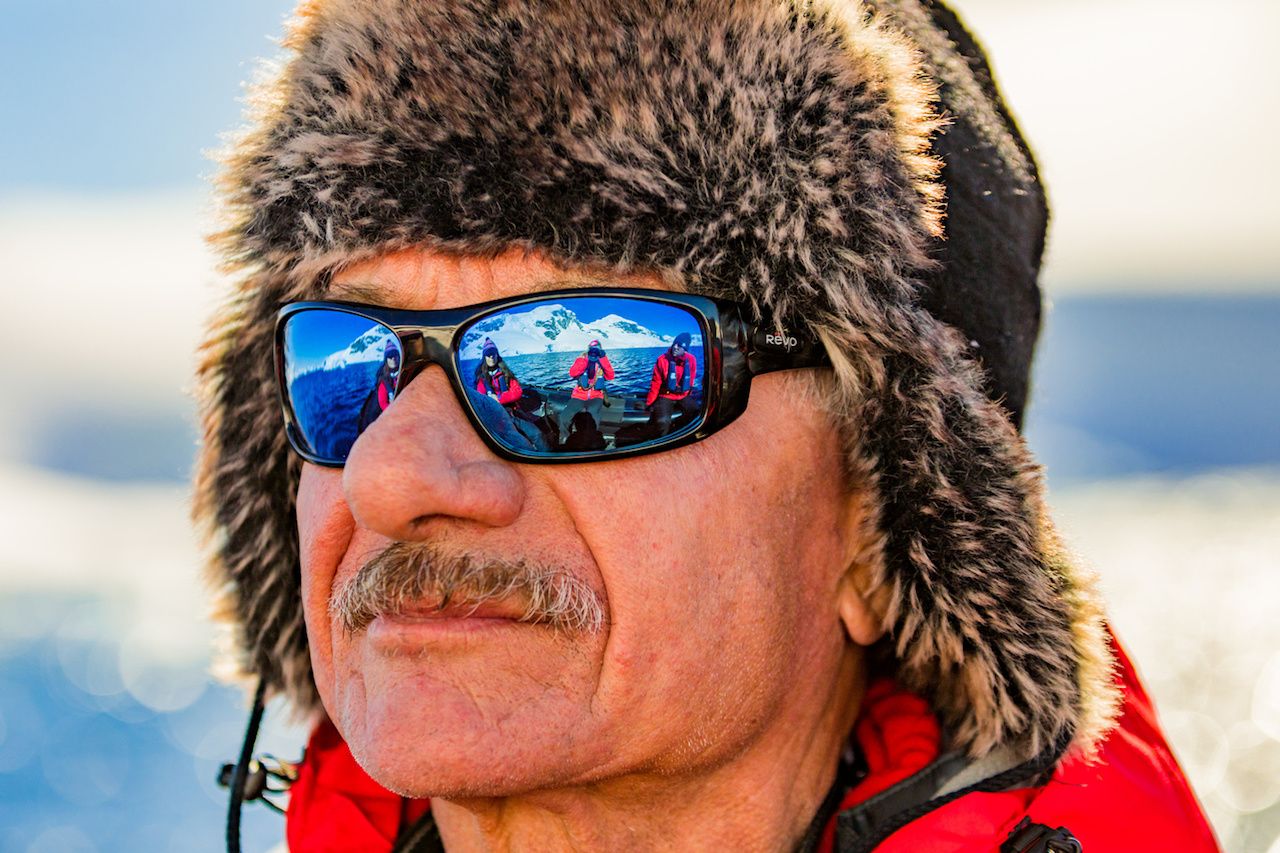 The guests onboard fit your preconceived notions, and then they don’t. Yes, it’s an older crowd — the demographic with the time and money for such a trip skews a little gray. But you may also find yourself talking with a couple of commercial airline pilots who are taking their annual vacation. Or a personal trainer and his favorite client who saved up for years to make the voyage. Or a young wife in an open marriage who booked the trip to make her boyfriend jealous. If nothing else, you’ll find high dollar people often come with highly fascinating stories.

During the day, the weather can change by the minute. One afternoon you may find yourself taking the polar plunge — where guests jump in the 28-degree water — under clear blue skies. Then a few hours later be sailing in a blizzard through frozen ocean. Your afternoon landing on the continent is cancelled, replaced by a lecture about what you would have seen. And a snowball fight breaks out on the top deck, now engulfed in a couple of feet of snow. 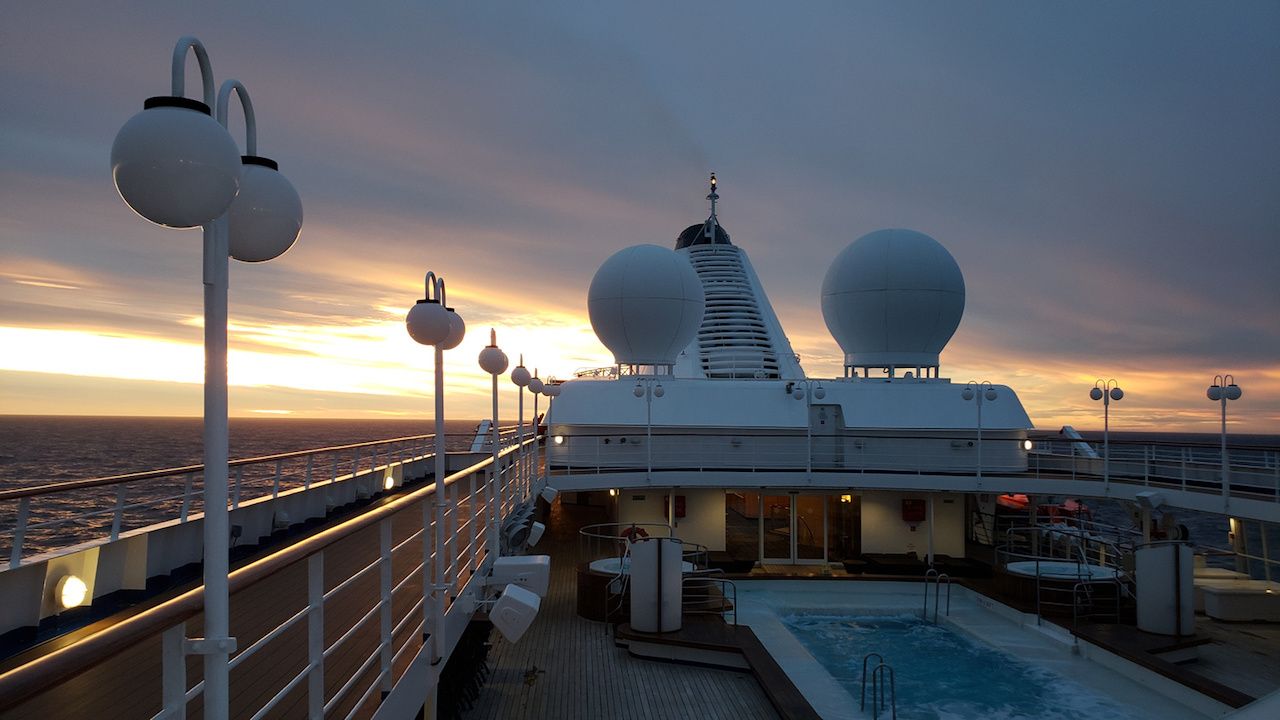 The jacuzzi, however, stays open. And some of the younger women aboard take this opportunity to show off their stylish swimsuits in sub-freezing temperatures. They ask for popcorn to go along with their glasses of Pinot Grigio. Blizzard be damned.

After a couple more days of rocking through Drake’s Passage, you finally arrive at the Beagle Channel, the waterway separating Argentina from Chile in Tierra del Fuego. It’s a snow-capped mountain finale that ends in the Argentine cruise port/ski town of Ushuaia, where you’d be remiss to leave without dining at one of its famous steakhouses. 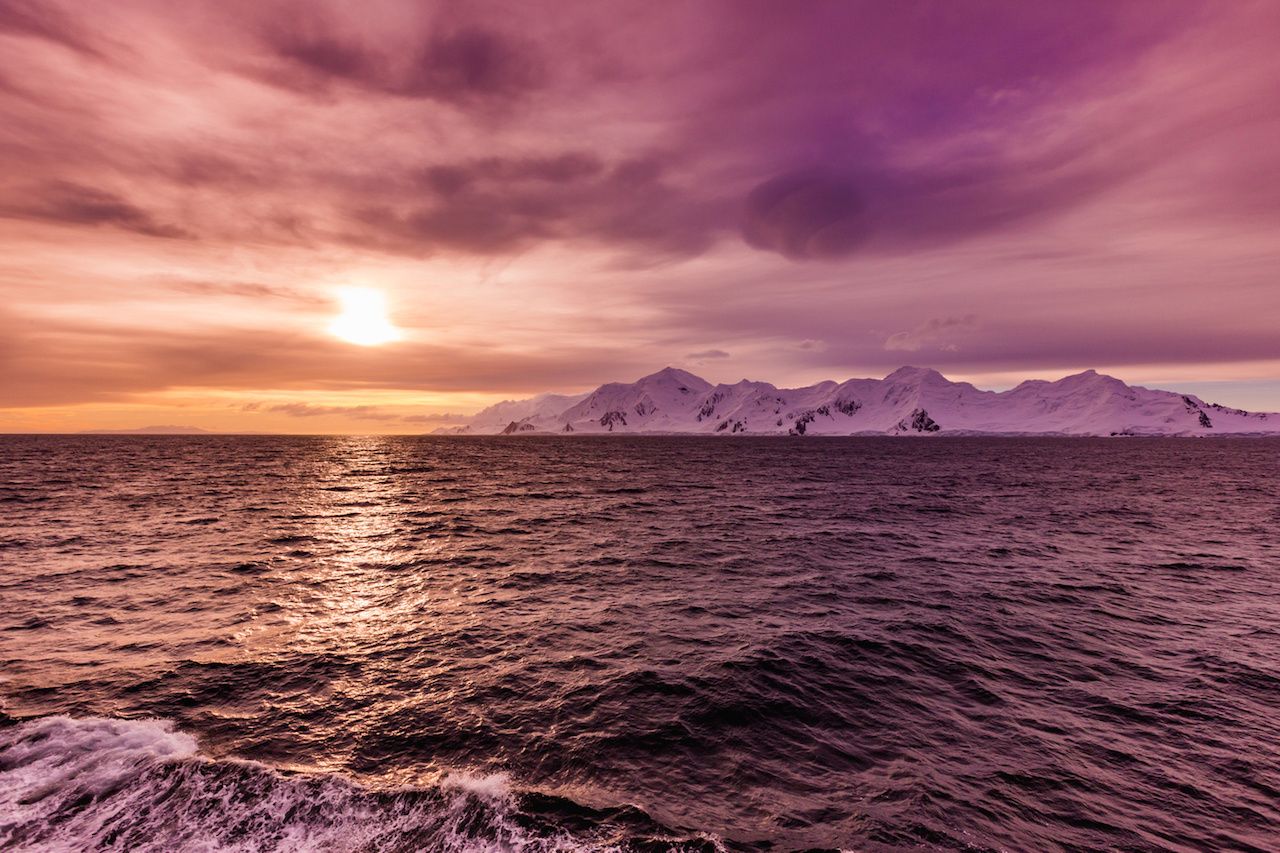 The final day you bid your butler farewell and board a private charter to Santiago, Chile. The luxury is easy to get used to, and when you arrive at your hotel in Santiago, you’re a little disappointed when there’s not a pillow menu and free room service at three in the morning. But this is what happens when you spend two weeks on the most luxurious vessel to ever sail into Antarctica. Perhaps Mr. O’Brady should treat himself to seeing the continent this way on his next voyage through.