Widely considered to be the birthplace of democracy and the cradle of Western civilization, Athens has been continuously settled for at least 5,000 years, making it one of the world’s oldest cities. As such, Athens is one of the richest archaeological sites on the planet. Stroll down Ermou, the city’s major shopping street, and you’ll catch tantalizing glimpses of the Acropolis, looming over the districts of Monastiraki, Plaka, and Psyri from atop its rocky limestone perch. But while it’s undoubtedly the most famous, the Acropolis — home to the iconic Parthenon — is far from the only ancient attraction in town. From ruined temples to sprawling cemeteries and world-class museums, here are eight lesser-known sites you should hit on your visit to Athens.

1. The cemetery of Kerameikos 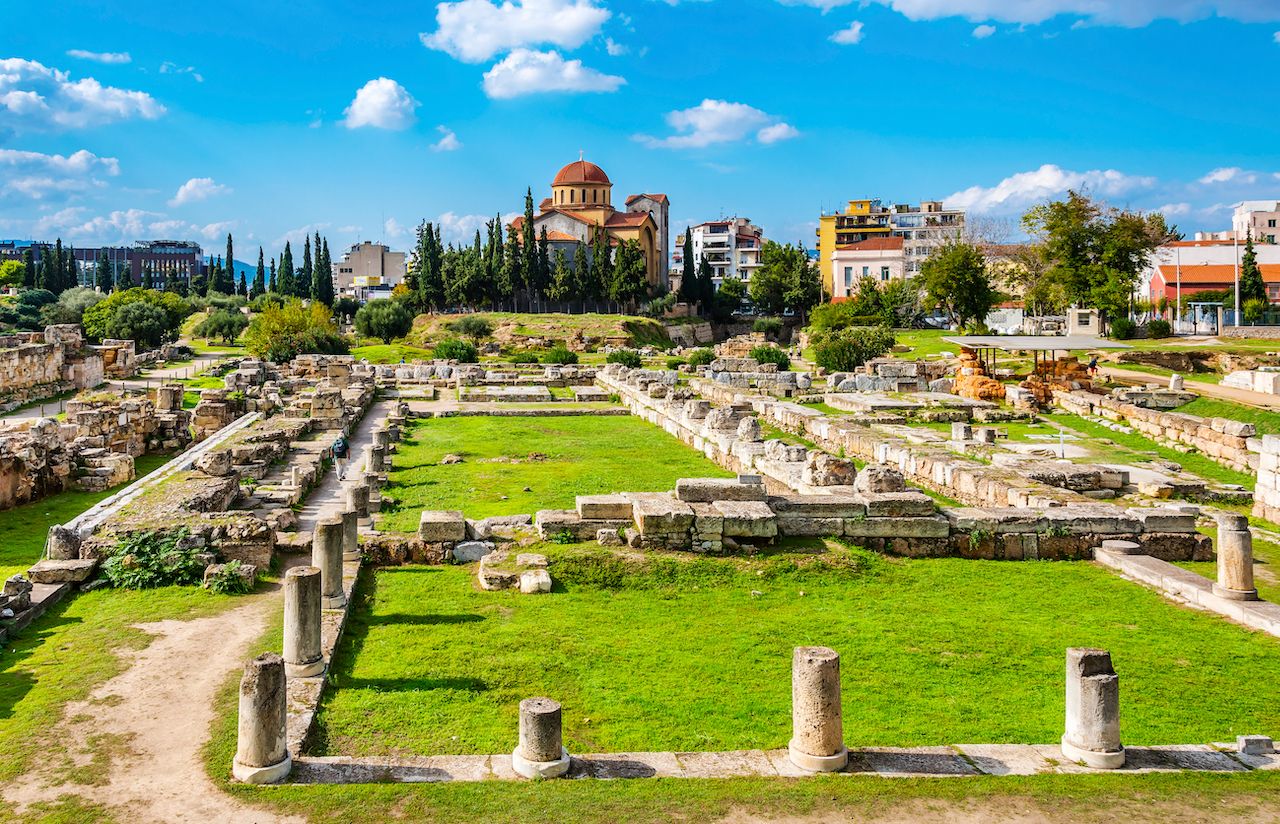 Despite being one of the most beautiful archaeological sites in downtown Athens, Kerameikos is also one of the least visited.

It takes its name from Keramos, the son of Dionysus and Ariadne, and a hero of the pottery trade (the word “ceramic” originates from the Greek keramikos, which means “of pottery”). As its moniker suggests, Kerameikos was home to potters and vase painters, who flocked to the area to take advantage of the rich clay deposits from the Eridanos, a small river that once again runs through the site today, having been buried under meters of landfill before being revealed by archaeological digs in the 1960s.

The earliest tombs in the area were built in the early Bronze Age period, spanning from 2700 to 2000 BC, after which the cemetery was used continuously up until around the sixth century AD. Over time it developed into the most important burial site in ancient Athens.

Head here outside of high season and there’s a good chance you’ll be able to explore the site without seeing another soul. Walk around the vast, tranquil grounds, taking in the ancient tombstones and monuments hewn from marble, as well as the countless cylindrical grave markers that began replacing them around the fifth century BC.

Make sure to check out the small but fascinating Archaeological Museum of Kerameikos, displaying various items excavated in the area, including statues, urns, and monuments. 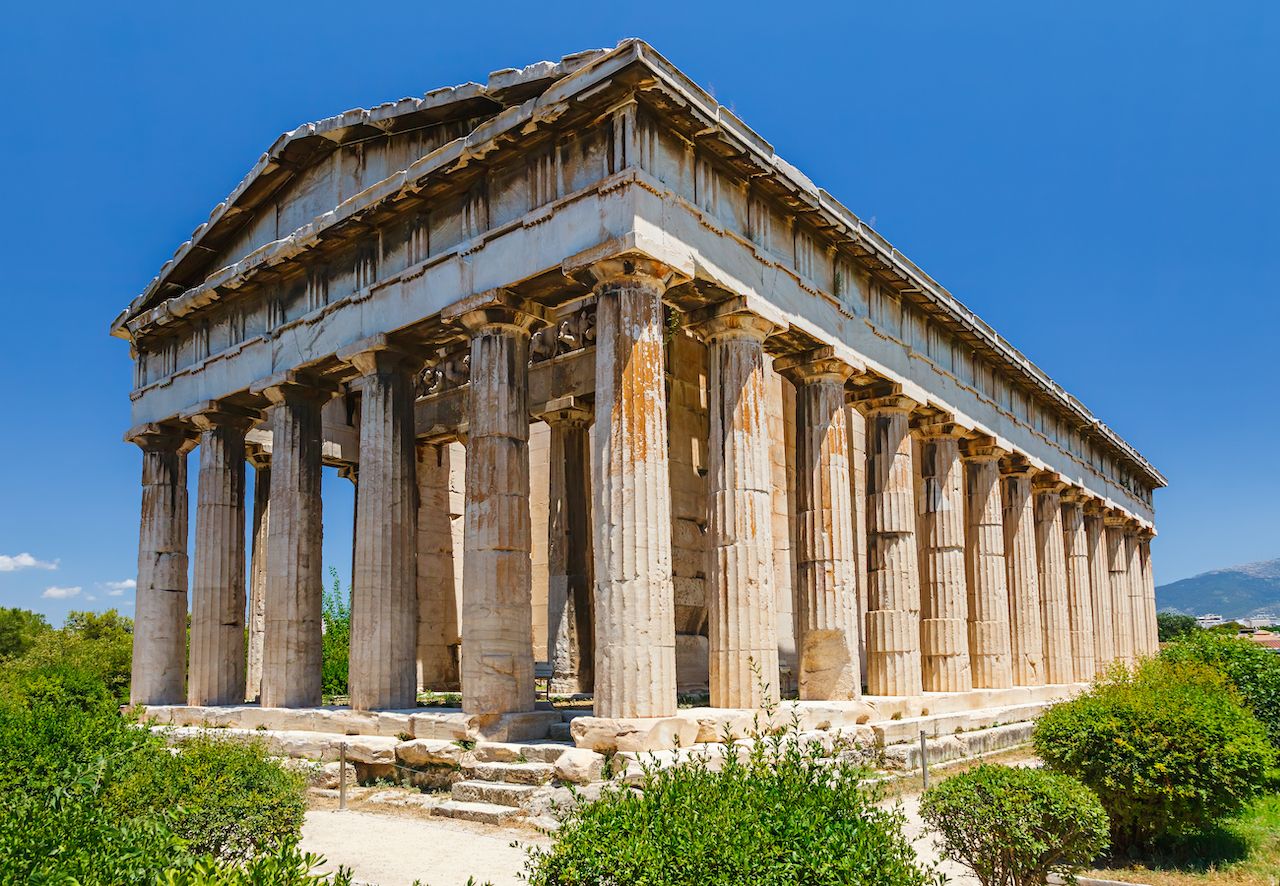 The beating heart of Athens in its time, the Ancient Agora occupies the mostly green space between the district of Monastiraki and the Acropolis, and has the distinction of being one of the world’s few archaeological sites with a train line running through it. Admission is included as part of your ticket to the Acropolis, yet just a fraction of tourists who visit the city’s most famous historic attraction make the trip to this sprawling site, which was once at the center of political, cultural, social, and religious life in Athens.

Having been declared a public space during the early sixth century BC, the site was gradually abandoned in the wake of the Slavic invasion of 580 AD. By the mid-19th century it had been wiped from the face of the city, buried beneath a succession of residential developments.

Few of the Ancient Agora’s buildings are well-preserved — a testament to the centuries they spent buried. But the Temple of Hephaestus, a beautiful columned structure built in the fifth century BC, has been remarkably undamaged throughout its long history. Another, the Stoa of Attalos — effectively an ancient Greek department store dating back to the second century BC — has been impressively rebuilt, and now houses the Museum of the Ancient Agora. 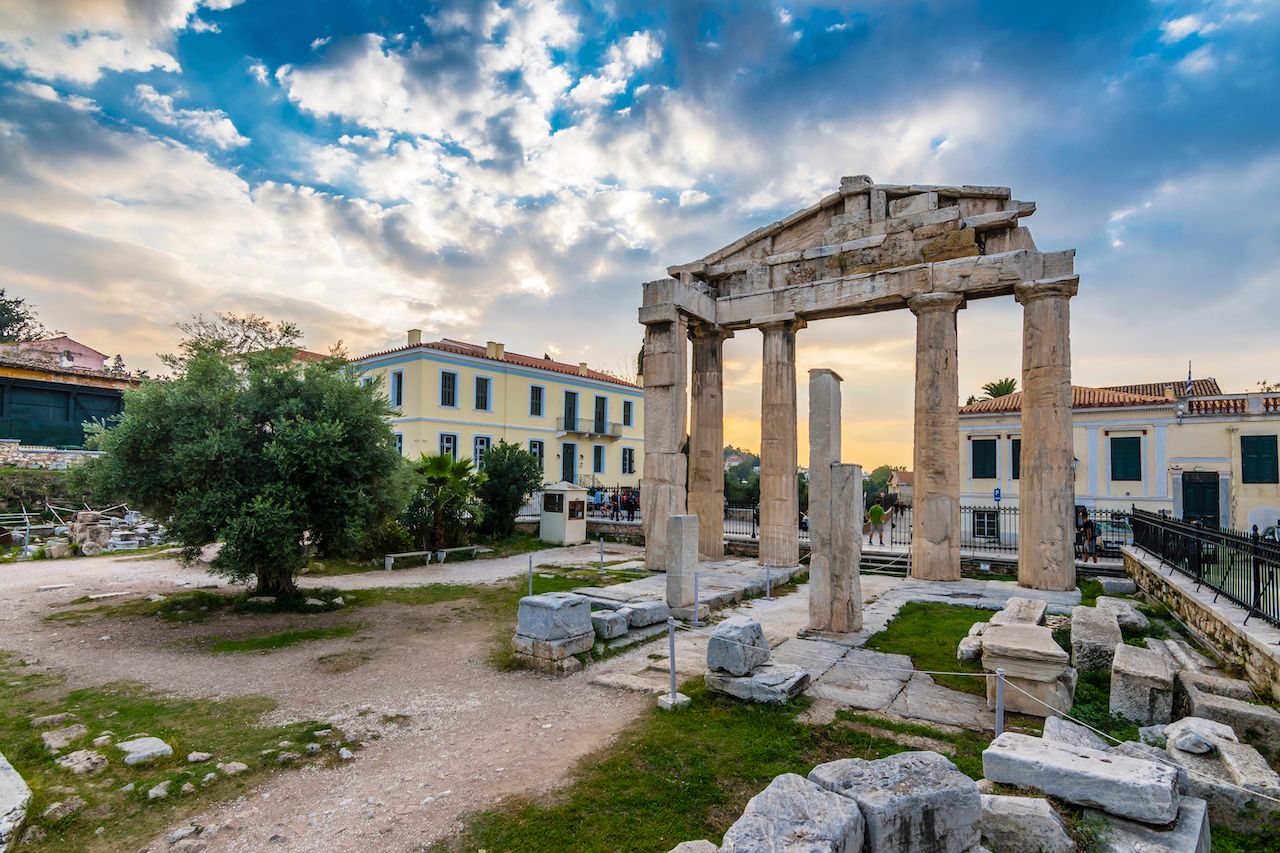 Athens, as one of the ancient world’s most important cities, had more than one agora (literally meaning a place of gathering).

Compared to the Ancient Agora, the Roman Agora is practically a baby, having been built between 19 BC and 11 BC. While originally less important than its older counterpart, the Roman Agora became the administrative and commercial hub following the Sack of Athens in 267 AD, when the size of the city was dramatically reduced to the area enclosed by the Late Roman fortification wall.

As with the Ancient Agora, the Roman Agora — also confusingly known as the Roman Forum — succumbed to the expansion of the city under Byzantine and Ottoman rule, when hundreds of houses were built on top of it. While much of the site has been lost, some impressive structures remain.

One is the Gate of Athena Archegetis, which served as the agora’s main entrance. Still standing to this day on the western edge of the archaeological site, it looks like the front of a Greek temple, with its four columns supporting a typical pitched roof. In some old paintings and prints of the area, the gate can be seen looming above streets of tightly packed houses that have since been demolished as part of efforts to preserve the city’s ancient heritage.

The Roman Agora is also home to the grand Fethiye Mosque, built under Ottoman rule in the 17th century. Renovated and reopened in 2017, it now hosts regular cultural exhibitions. 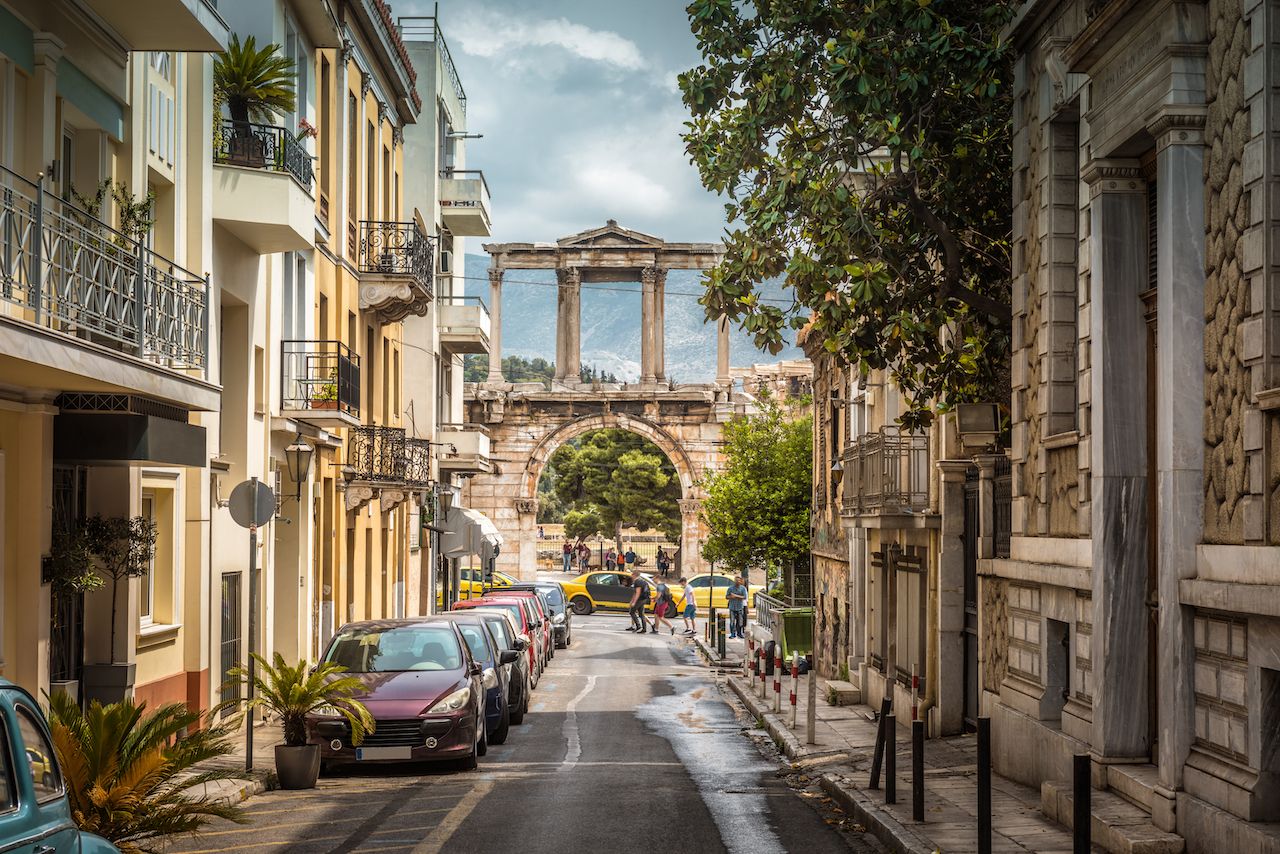 This triumphal arch is located on an ancient street that once connected the old city of Athens to the newer Roman settlement built by the Emperor Hadrian.

Erected in 131 AD, Hadrian’s Arch is made up of an arch topped by a series of Corinthian columns and pilasters, all of which are made from fine Pentelic marble.

The gate is incongruously perched next to a busy avenue, surrounded by nothing more than a low metal fence. No one queues up to visit; people merely walk past on the sidewalk, perhaps snapping a quick picture on the way.

Give this gloriously preserved relic the attention it deserves by taking the time to spot the two inscriptions carved on the architrave. One, on the side facing the Acropolis, reads: “This is Athens, the ancient city of Theseus.” The second, on the opposite side and facing the new city, declares: “This is the city of Hadrian and not of Theseus.” 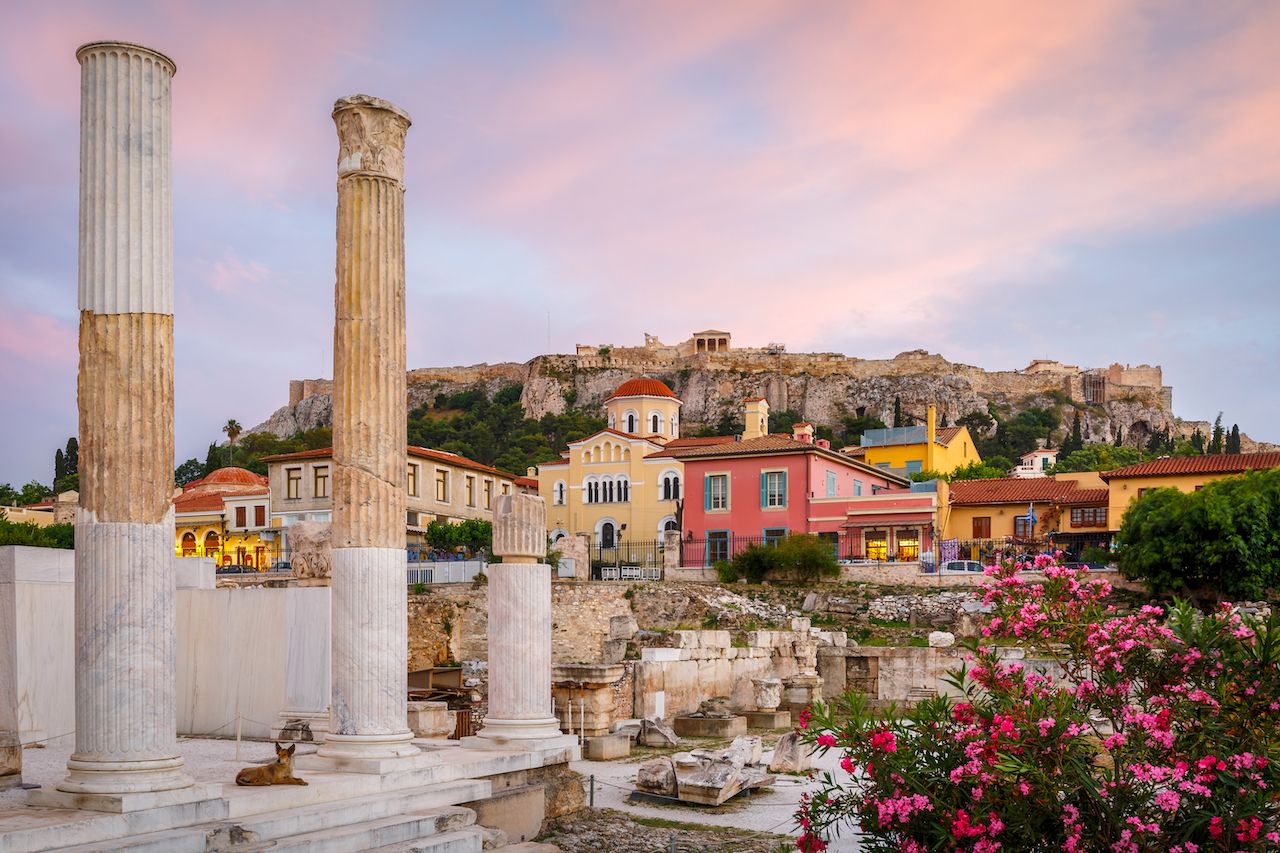 Hadrian’s Library — built in 132 AD at the behest of the Roman emperor – has endured a turbulent history, having been destroyed during the 267 AD Sack of Athens and incorporated into the Late Roman city walls. Another 150 years passed before it was to be repaired.

In truth, the name is a little misleading. Far from just a library, the site had rooms for music and lectures, as well as a pool surrounded by 100 columns.

At the heart of the library’s grassy courtyard are the ruins of a church, which shares in the building’s dramatic history. It was built and subsequently destroyed three times throughout the years, most recently by a fire in 1885.

Entrance to the library is packaged into the standard Acropolis ticket. While the site itself is a beautiful and evocative place to walk around, the best place to get a feel for its sheer scale is from nearby Dexippou Street, which overlooks the ancient ruins.

6. Museum of the Ancient Agora 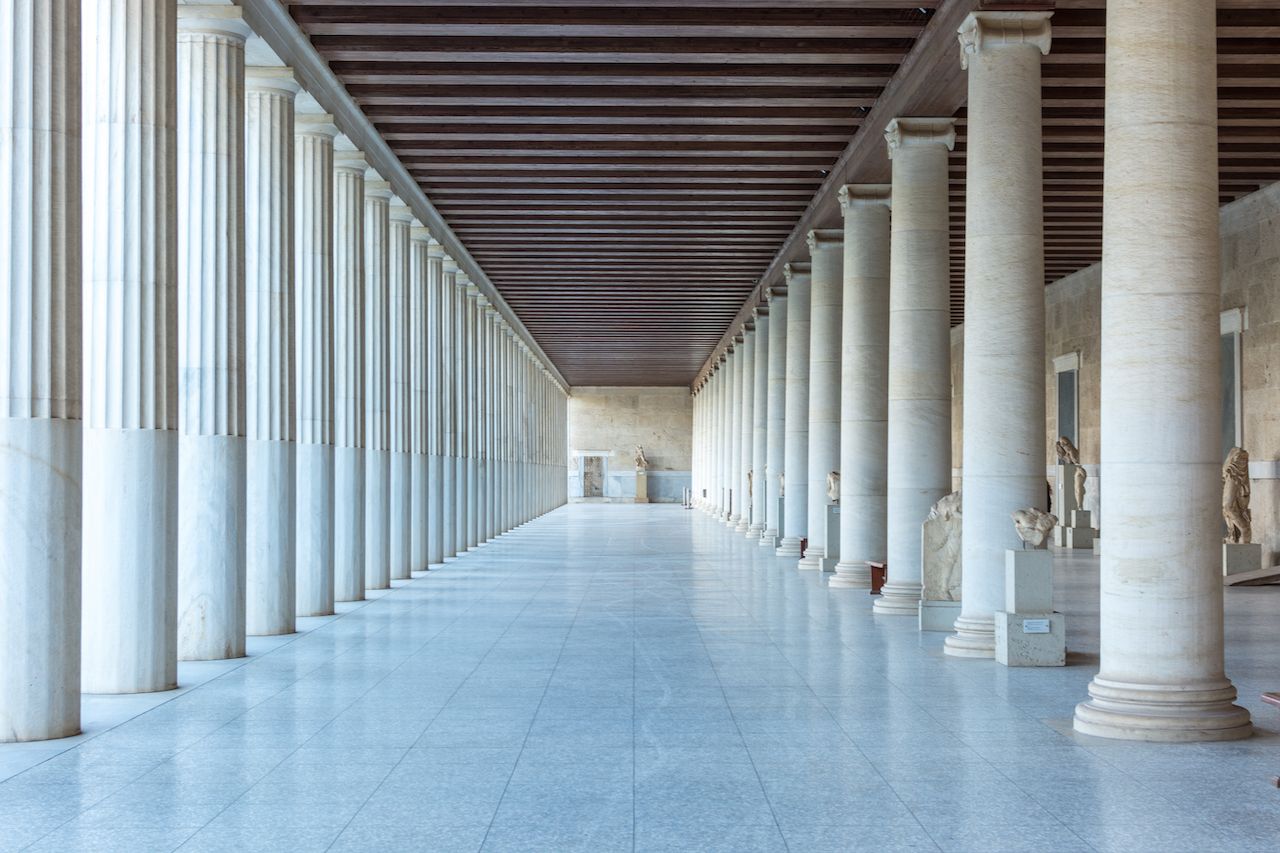 When surveying a vast archaeological site, it can be difficult for visitors to come to grips with how it looked and how important it was, during its heyday.

The Museum of the Ancient Agora, situated within the grand reconstruction of the Stoa of Attalos, is the best way to glean an understanding of the site’s key role in ancient Athenian society.

Its substantial collection, arranged chronologically and thematically, features pieces from the Neolithic to the post-Byzantine and Ottoman periods. You’ll find everything from vases and terracotta statuettes to Neolithic and Bronze Age weaponry. Everything displayed here was excavated from the wells and tombs in and around the Ancient Agora.

7. The Temple of Olympian Zeus 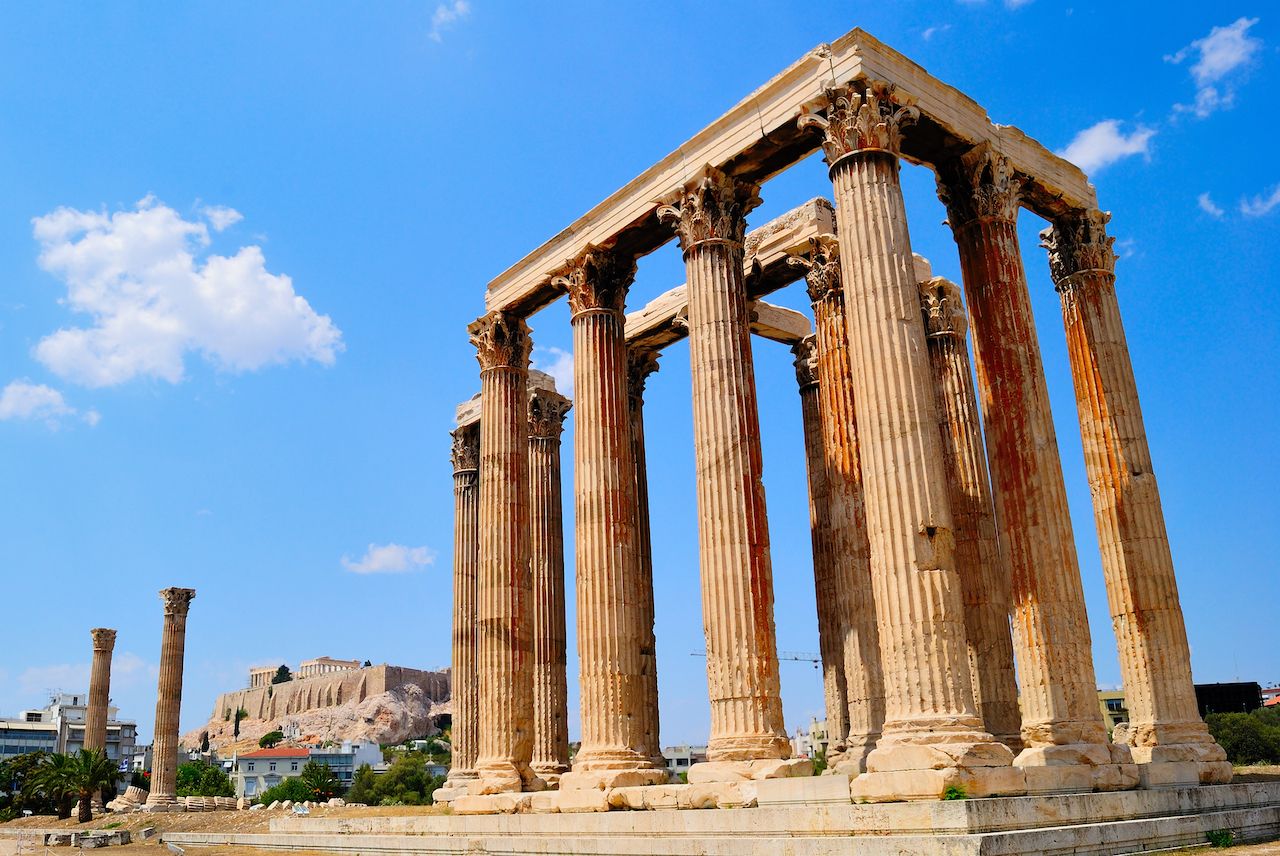 Also known as Olympieion, the Temple of Olympian Zeus offers proof of the phrase “good things come to those who wait.” Construction of the huge temple — once the largest in all of Greece — was begun in 515 BC by Peisistratus the Young. By the time it was finished, Peisistratus was no longer young; in fact he’d been dead for 650 years.

Unsurprisingly, time has taken its toll on the temple. Only 15 of its original 104 Corinthian columns are left, one of which was blown over by gale-force winds in 1852. But the imposing scale of the remaining structure offers a glimpse at the vast proportions of this once-great site, which — at the time of its construction — also had two immense statues; one to Zeus, and another to Hadrian, who associated himself with the king of the Greek gods. 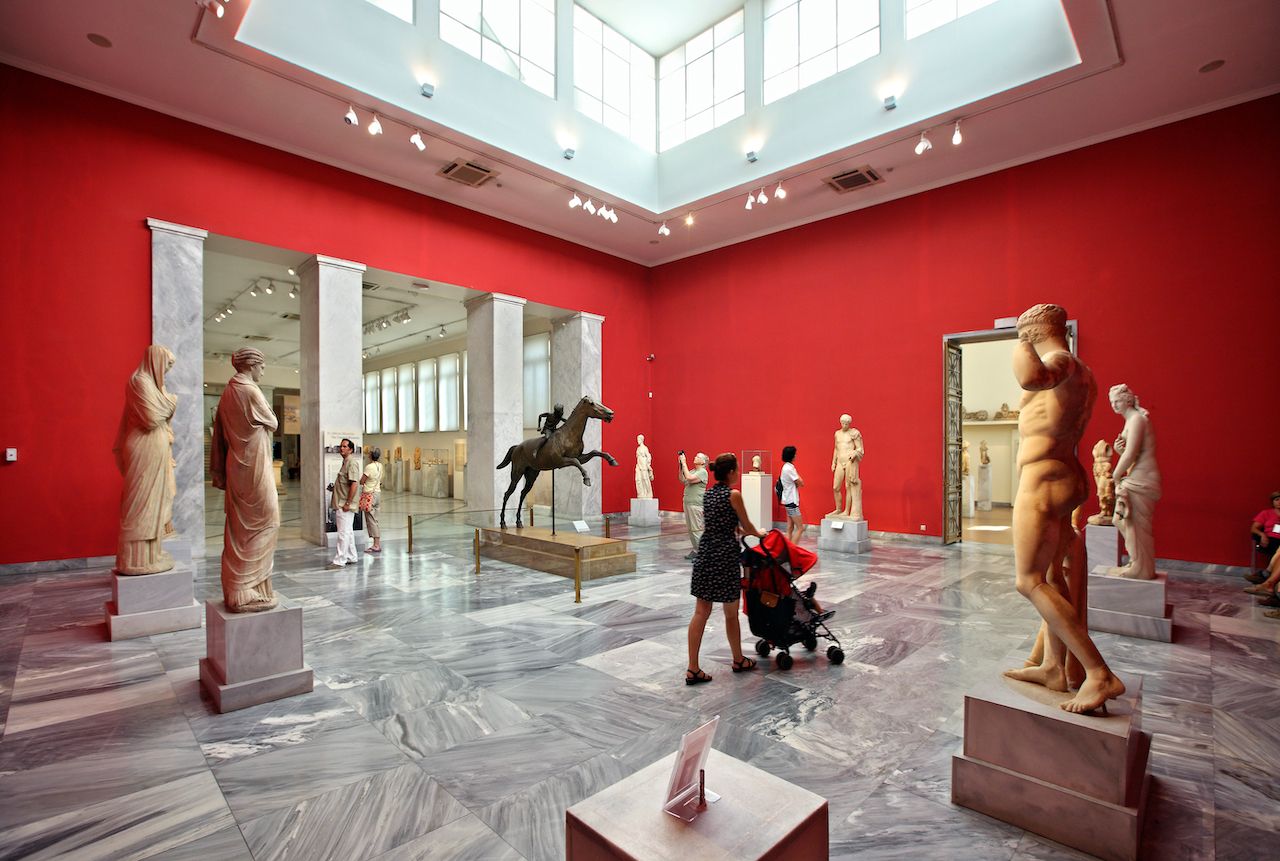 Housed in a striking 19th-century Neoclassical building, the National Archaeological Museum is the largest museum in Greece, with a collection that includes more than 11,000 items.

Originally intended to house artifacts discovered during the extensive excavations of the mid- to late-1800s, its collection was expanded to incorporate ancient finds from throughout the Greek world. Today, the museum houses five permanent exhibitions, covering prehistoric antiquities; sculptures dating from the seventh century BC to the fifth century AD; ancient Greek ceramics; metallurgical works; and artworks from Egypt and Asia Minor dating from 5000 BC to the time of Roman conquest. It is, in short, a must-visit for anyone seeking a comprehensive overview of the country’s ancient history.