Athens is a blend of the past and modernity, as its downtown bears witness to more than 3,000 years of history. Classical, Roman, and Byzantine influences are evident in the city’s heterogeneous architecture, while the narrow pavements and the 1960s cement blocks rooted along them attest to the city’s rapid urbanization. Starting from the foot of the Acropolis hill, and expanding to all four corners, Athens’ neighborhoods have distinct personalities, offering something for everyone. Here’s a guide to the areas visitors must see, and tips on how to make the most of them. 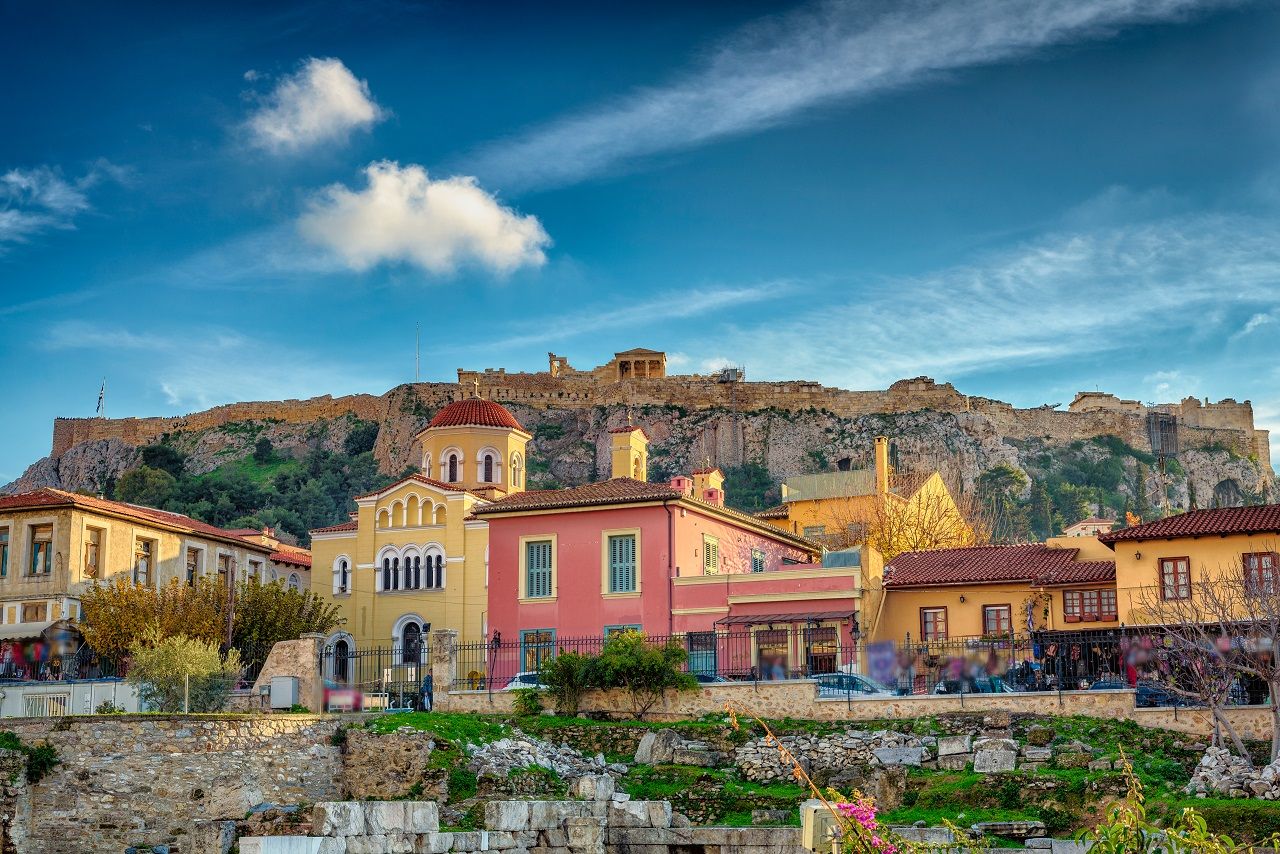 Plaka — Known also as the “Neighborhood of the Gods,” Plaka is at the foot of the Acropolis and close to Athens’ other major archaeological sites such as the Ancient Agora and the Tower of the Winds (known as the world’s first weather station). Plaka is a network of winding lanes and hub of neoclassical architecture. The area’s hallmark is the tiny, bougainvillea-filled locality of Anafiotika, which looks very much like Mykonos and Santorini thanks to the Cycladic-style white houses. After your visit to the Parthenon and the Acropolis Museum, take a walk along the esplanade of Dionysiou Areopagitou. Then, stop at Scholarhio in the shadow of the Acropolis for a well-priced selection of traditional dishes such as baked lima beans, stuffed vine leaves, and fried anchovies. As Athenians will tell you, a walk in Plaka is better carried out with an ice cream cone in hand, which we recommend you get from Coco’s. Just off Adrianou Street — the heart of souvenir shopping — is the atmospheric Brettos bar for an introduction to Greek liquors and an excellent selection of wines. 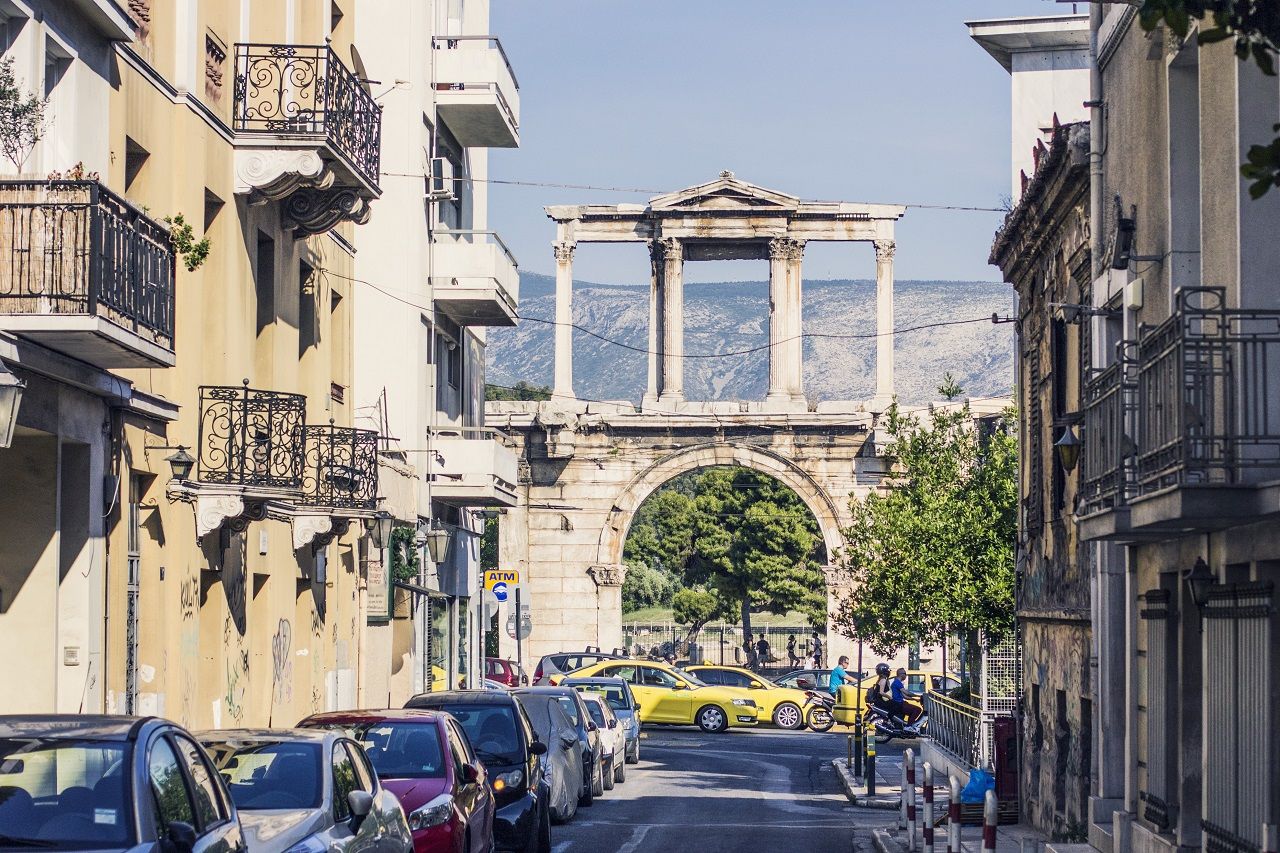 Koukaki — Located between Acropolis and Syngrou Fix metro stations, Koukaki is adored by Athenians and is living through a renaissance — partly because of Airbnb’s endorsement as one of the world’s “most interesting neighborhoods to stay” in. But regardless of the recent tourist buzz, Koukaki stays loyal to its authenticity. For the past 60 years, while residents and visitors are sleeping, family operated Takis Bakery creates bread, pies, cakes, and more to cater to morning customers from all over town. On Fridays, the farmers market along Zacharitsa Street overflows with fresh produce. Drakou and Koukaki squares are the neighborhood’s pedestrian zones, where most of the food and drink activity takes place. Note that if you arrive after 9:00 PM on weekends, you may have to go on the waiting list for one of the many restobars. Koukaki is very popular among students due to its proximity to Athens’ top ranking social sciences university. Check out the homey brunch spots, artsy boutiques, and classy wine bars. Make sure you stop at the Ilias Lalounis Jewelry Museum for some art and culture and the hip Little Tree Books & Coffee if you need to do some work or check your emails. 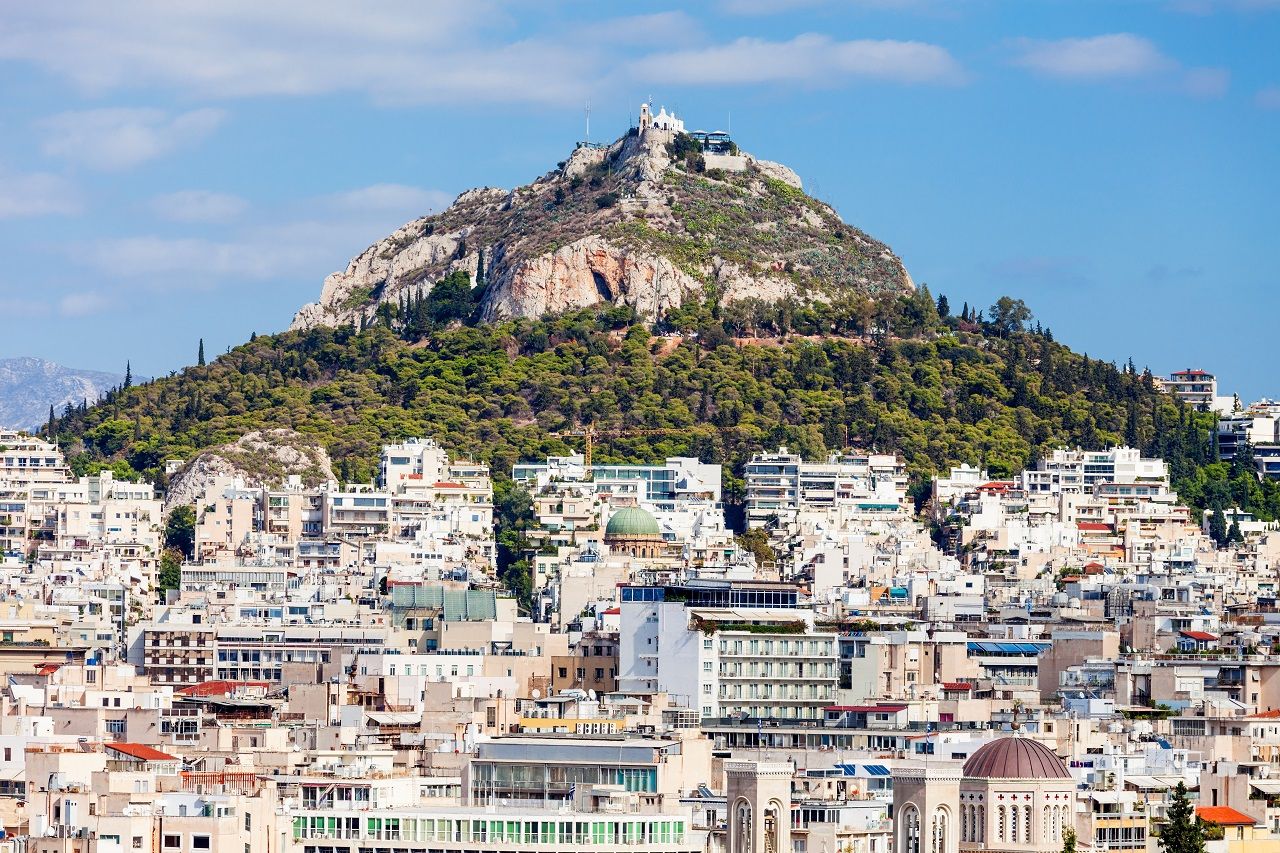 Kolonaki — In the heart of Athens, between Syntagma Square and Mount Lycabettus, this posh area is notorious for its haute couture boutiques and shoe emporiums. Kolonaki Square is synonymous with long-standing cafes, which are beloved people-watching spots, especially on slow Sunday afternoons. Trendy, all-day bars such as Passepartout and Skoufaki along Skoufa Street mark the neighborhood’s nightlife. Brave the congestion and narrow sidewalks to check out the neighborhood’s artsy vibes by visiting places such as the traditional Désiré patisserie, Zoumboulakis art gallery, Degustation deli shop, and Booktique bookstore. Five-star hotel St. George Lycabettus is world-famous for the panoramic views over Athens. However, you can still enjoy spectacular views from atop Lycabettus Hill, which you can reach by cable car, an uphill hike, or by taking a spin. If you are in Kolonaki just for the Benaki Museum, consider a short stop at Carpo for a healthy bag of dried fruits and nuts and freshly ground coffee on the go. 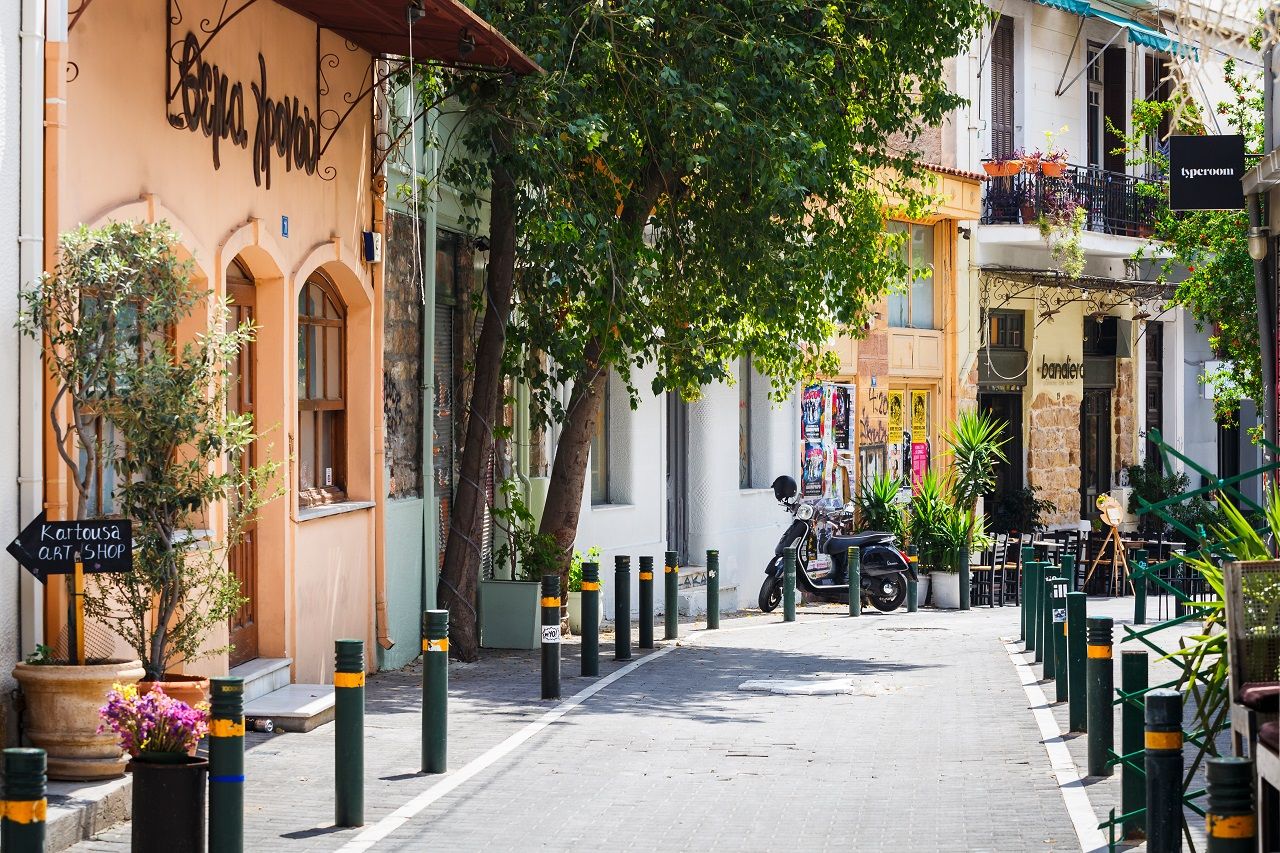 Psyri — Psyri is part of the historic center but has gone through radical transitions in the past 15 years — from a nightlife hub for the disconsolate punk youth in the early 2000s to sharp deterioration and neglect during Greece’s economic recession. However, Psyri moves with the times, and newly opened innovative hotels such as The Foundry, vintage boutiques, and antique and second-hand shops are now giving the neighborhood a fresh life. The yellow and brown walls of the neighborhood’s ‘60s buildings are altered beyond recognition by Greek and international street artists whose art add cultural value and increase the appeal of the area. If you have a sweet tooth, we recommend a brief stopover at Serbetia patisserie, which has been the neighborhood’s landmark since 1997. 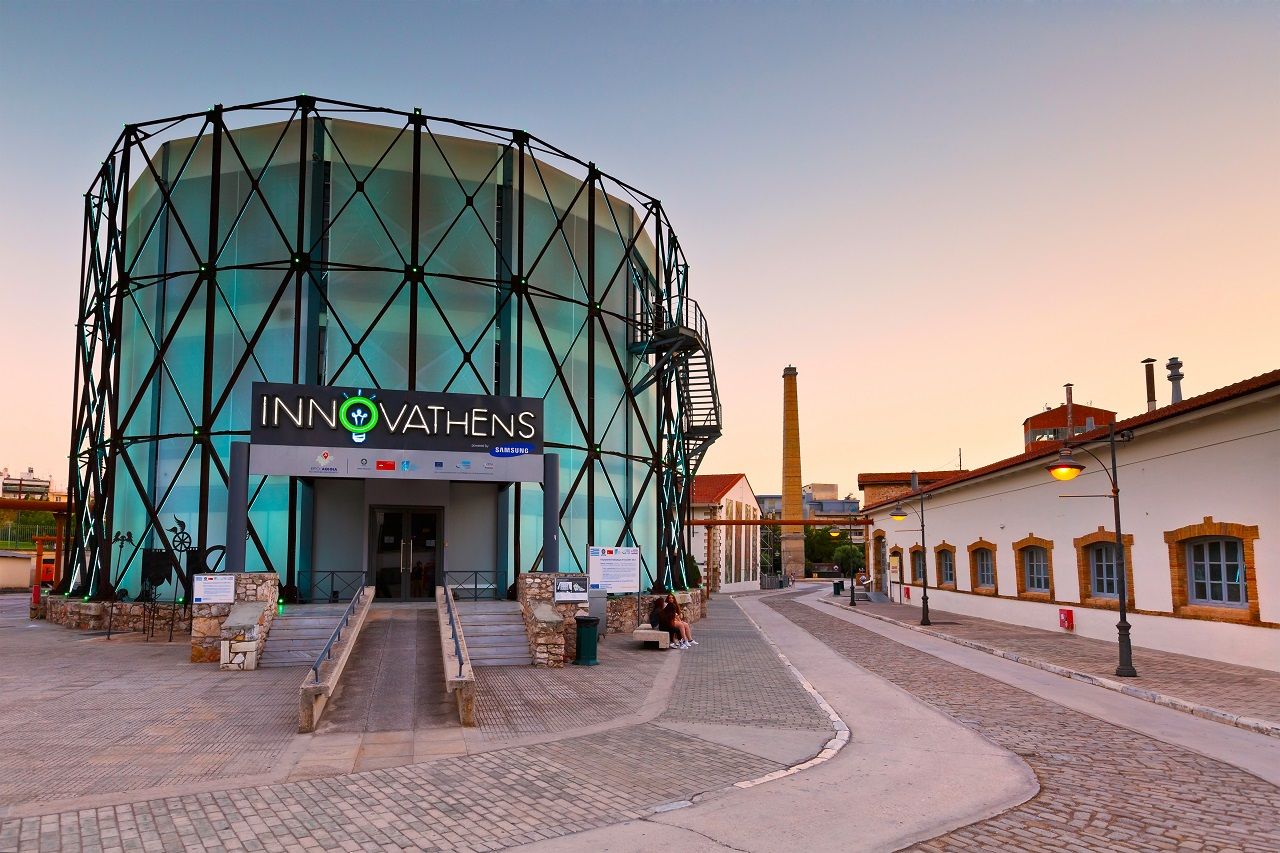 Kerameikos/Gazi — Keramikos and Gazi are separated by Pireos Avenue and have very different atmospheres. Gazi, which took its name from the gas plant that operated there between 1857 and 1984, wasn’t always the party destination that it is today. It was in 2007, after the construction of the Kerameikos metro station that old warehouses transformed into trendy nightclubs and streets became awash with 20-somethings. Gazi also houses the Gazarte and Technopolis cultural hubs that bring theater performances, exhibitions, and annual festivals to the community. The area is also among the most hospitable areas in the city toward the LGBTQ community with dedicated bars and clubs. Cross Pireos Avenue and step into Keramikos, the edge of ancient Athens, where the first public cemetery was allocated back in 2700 BC. Low-key Keramikos links the buzzing city center of Athens with the booming Gazi, but that’s not all it does. In the past few years, the neighborhood’s rock-bottom rents have attracted young and creative Athenians, so the area has become a hive of internationally inspired concepts such as the award-winning Funky Gourmet restaurant. 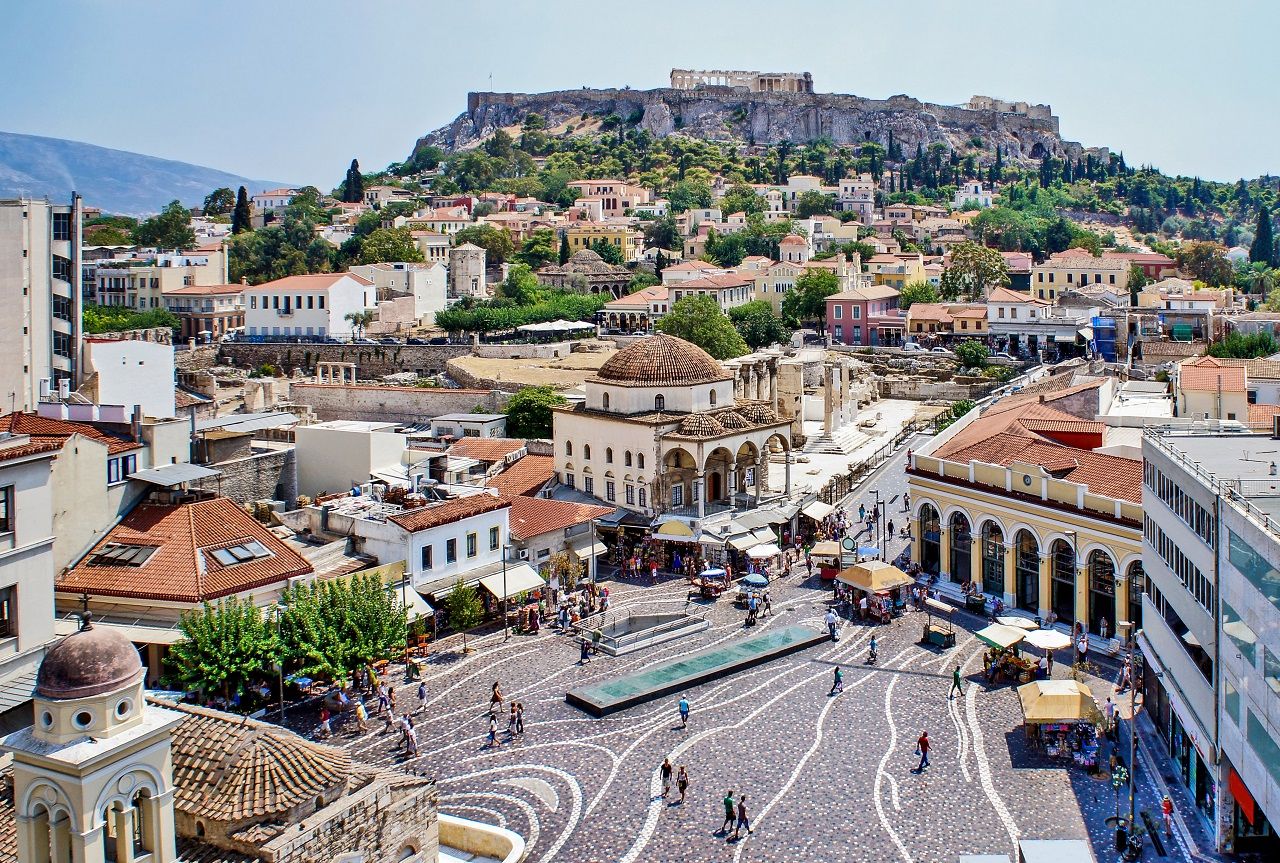 Monastiraki — This neighborhood pulls out all the stops for a fulfilling day out in the city. The metro stops at Monastiraki Square where street entertainers and fruit vendors set up their small businesses every morning. On Sundays, Monastiraki has a quirky alfresco flea market known among Athenians as Yusurum. Here, you can find just about anything — from books and antiques to vinyl and china cups. It gets busy with locals and visitors, but it’s a lot of fun. Don’t fret if you can’t make it on a Sunday; the neighborhood has plenty of shops that are open throughout the week. After hours of browsing for unusual wares, head to Thanasis for a kebab and stroll along the pedestrian-only and cafe-filled Adrianou Street. We recommend that you allocate about two hours for the Agora archaeological site, the center of political, commercial, social, and cultural life in ancient Greece. 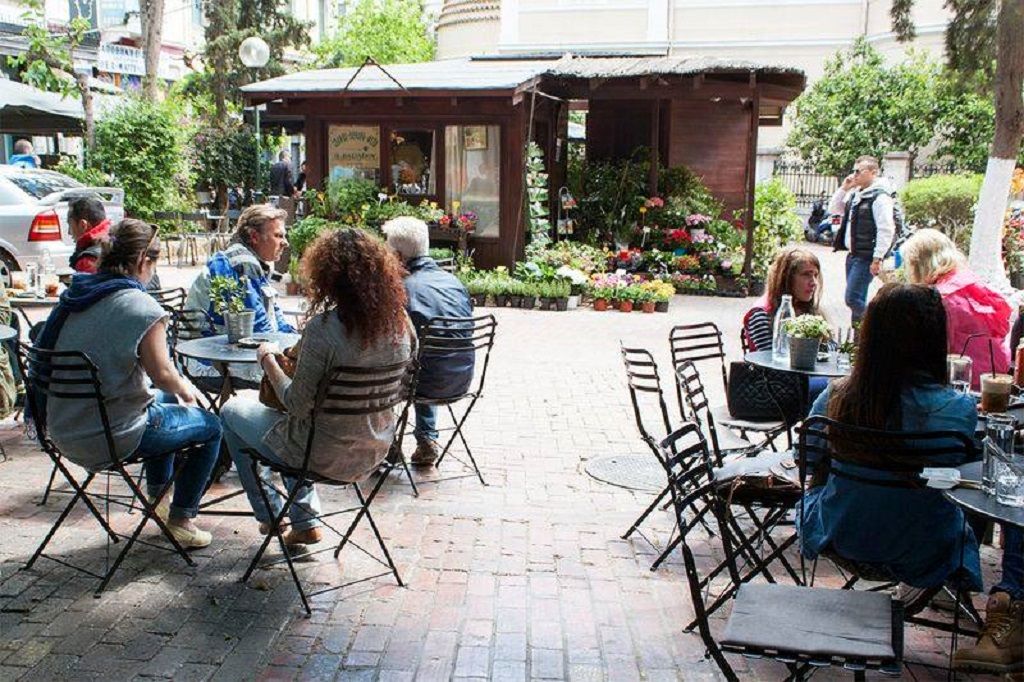 Agia Irini Square — A short walk from both Syntagma and Monastiraki squares lays Agia Irini piazza and its neatly organized coffee tables and seats. In the past eight years, the neighborhood has blossomed into a vibrant spot where everyone is welcome. During the 20th century, Agia Irini was the trade center of florists and botanists, whose Sunday market turned the square into an explosion of color. The area has taken its name from the church in the middle of the square, which was built in 1892, replacing a Byzantine cathedral. The piazza has some of Athenians’ favorite cafes and bars such as the Rooster and Throubi. Many of the bars in the area are open from the morning for coffee and brunch until late at night. Arrive here on an empty stomach, so you don’t miss on the traditional honey and cinnamon-covered delights at Lukumades.