Athens and its surrounding areas have plenty of public parks and natural habitats, even though the bustling urban life often overshadows outdoors activities. The city’s temperate Mediterranean, coupled with the gentle mountainous and peninsular terrains, complement its tucked-away natural treasures. Take a break from the metropolis’ pandemonium to enjoy the soothing benefits of fresh air, sunlight, and physical activity in these unbeatable natural havens in and around Athens. 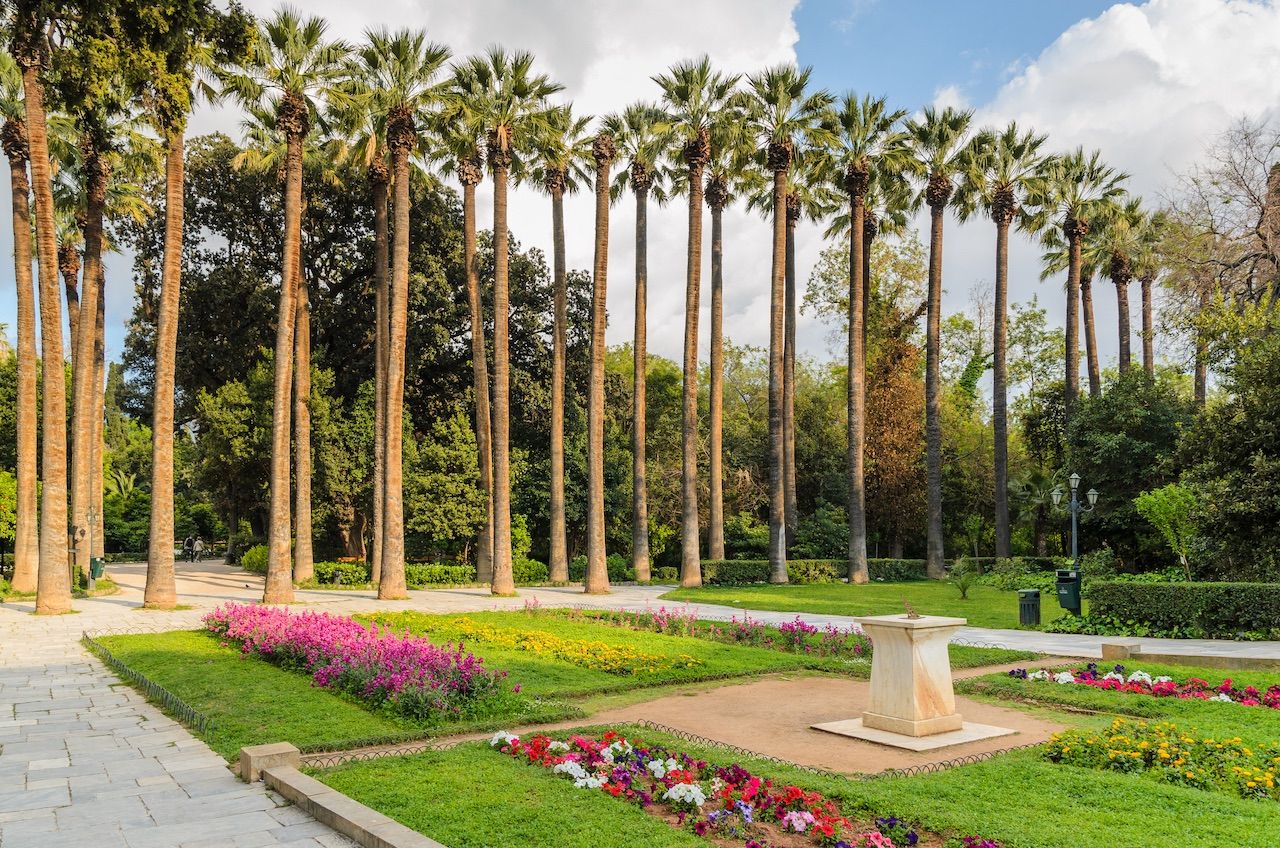 National Garden — The National Garden’s history dates back to ancient Greece, when part of it was gifted to one of Aristotle’s successors, botanist Theophrastus. Today, the garden is a fine example of 19th-century landscape architecture in Europe, in part created by the wife of King Otto of Bavaria. The garden is located just outside the most central and busiest metro station of Athens, Syntagma.

Hundreds of plant species are native, or come from Europe, Australia, China, and northern Africa. Eighty two-foot-tall California palms grace the main entrance, which is less than half a mile away from the Parliament where the hourly changing of the guard ceremony takes place. Archaeological findings of a Roman bath were unearthed during the creation of the garden, which, along with a wide mosaic flooring, gives rise to an alfresco museum. The discoveries have no signage, so can easily be missed.

The garden has six ponds, and among its permanent residents are pheasants, swans, parrots, peacocks, and goats. Whether you decide to walk or jog on the labyrinthine-like alleys, read your book under the shade of a tropical tree, or be a passerby escaping the surrounding traffic, here you’ll detach yourself from the density of the city. The garden is open every day from sunrise to sunset unless announced otherwise. 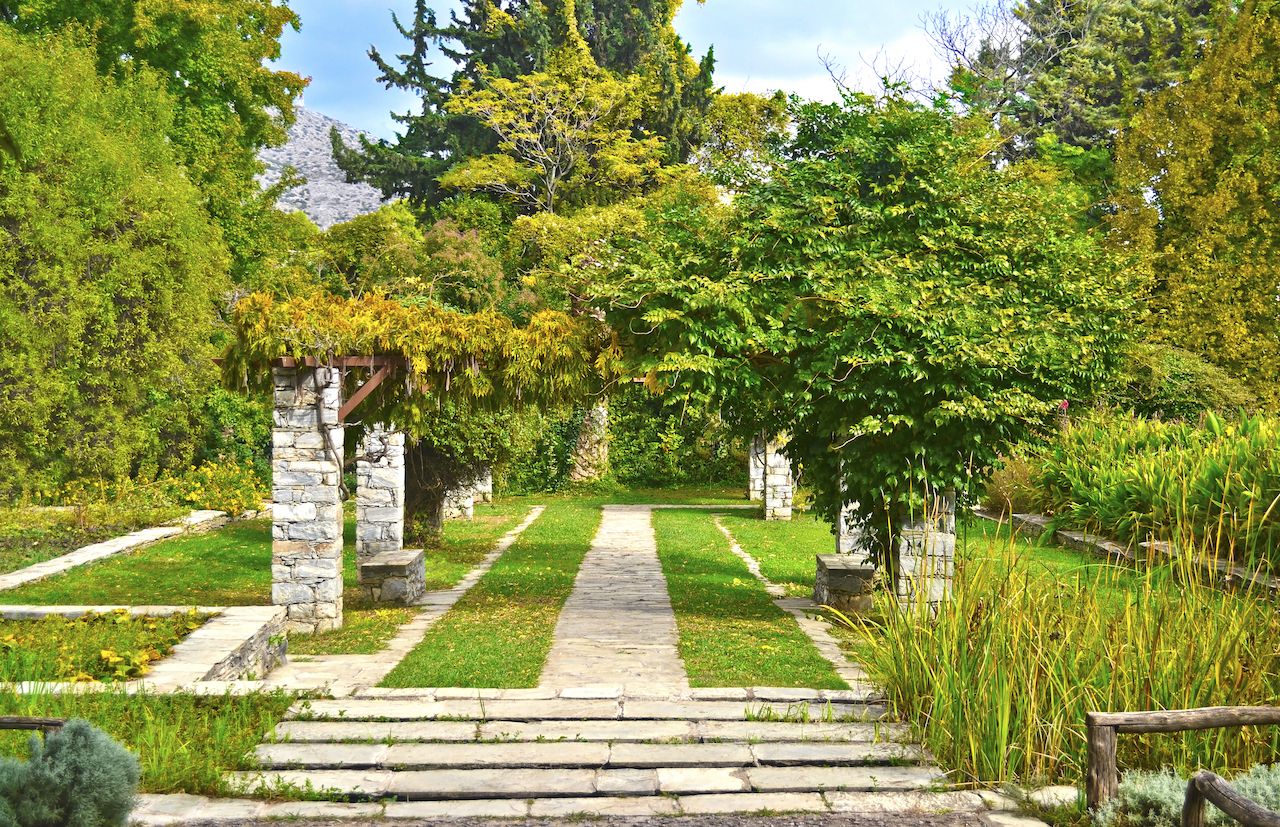 Diomedes Botanical Garden — Five miles away from the city, on the west side, lies the biggest botanical garden of the eastern Mediterranean. With over 4,000 plant species from every corner of the world, this is an excellent spot to connect with nature. This is the only botanical garden where you will see some of the plants mentioned in Greek mythology and the Bible — even the poisonous plant conium maculatum, which was used to kill Socrates.

The garden is divided into seven thematic yards and a greenhouse, all of which offer a different experience of colors and aromas depending on the season you visit. The garden is also a haven for wildlife such as foxes, hares, ferrets, and owls. The site never gets packed, but make an early start to savor the nature’s awakening. By the entrance, a homey cafeteria — and an ideal meeting and resting point — serves snacks, desserts, and beverages. You can visit the premises every day between 8:00 AM and sunset for free. 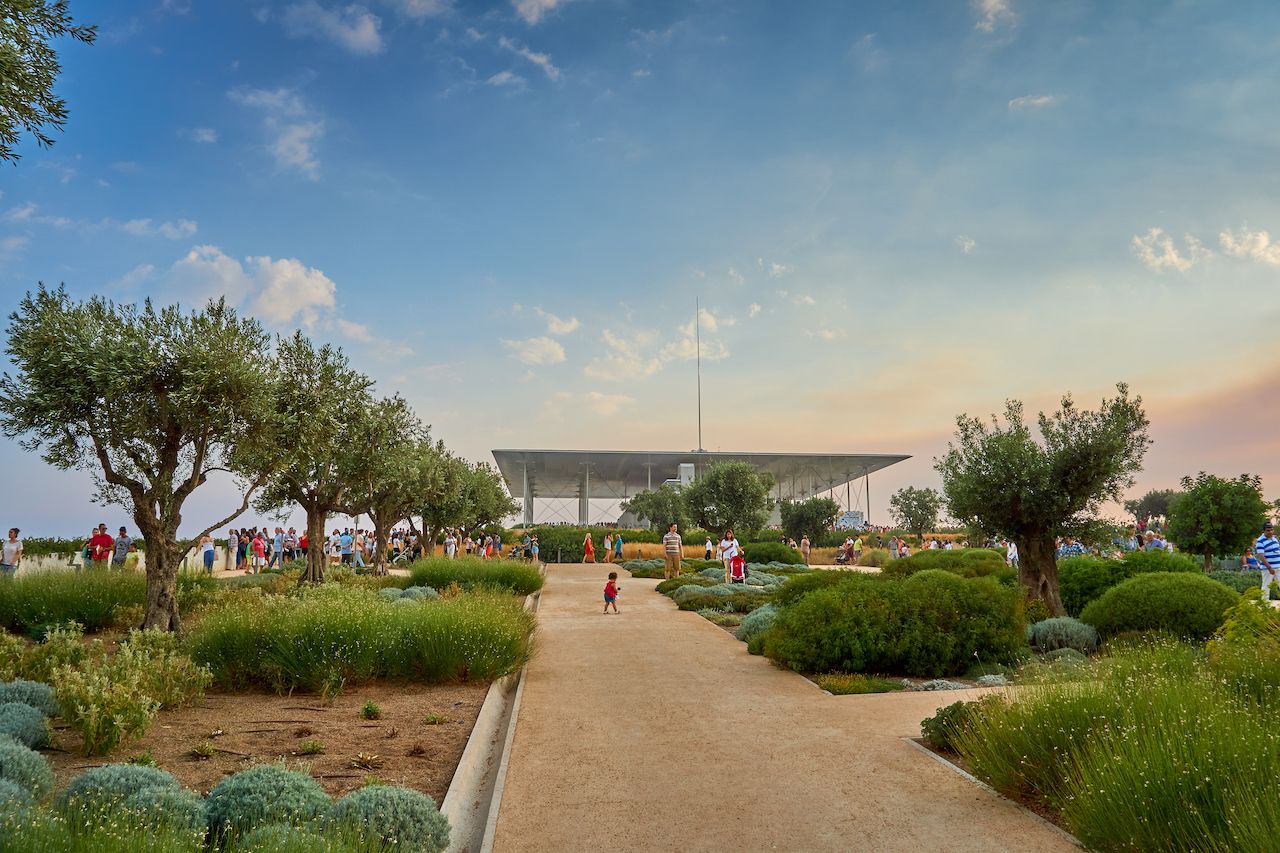 Stavros Niarchos Park — Stavros Niarchos Cultural Center on the edge of Faliro Bay is about three miles south of the center of Athens. This is the newest addition to Athen’s educational, cultural, and environmental scene, and the largest construction project in Greece since the beginning of the economic crisis. Besides being the new home to the National Opera and the National Library, the SNFCC hosts a vital green space, ideal for sports, recreational activities, and rest.

Paths lined with pine and olive trees lead to the Great Lawn in the heart of the park, which bursts into life during the summer months as a result of festivals and live music events. Invigorate your senses in the sunlit Mediterranean Garden, where evergreen and endemic plants such as oregano, thyme, and rosemary spread their aromas throughout the urban air. The park extends on a 105-foot-tall summit, which is one of the largest sustainable roofs in Europe, and offers 360-degree views of the sea to the west and the Acropolis to the east. Back on the ground, an esplanade, suitable for jogging and biking, runs alongside a canal. The park offers short-term bicycle rentals for children and adults, as well as kayaking lessons in the canal, which must be booked in advance. 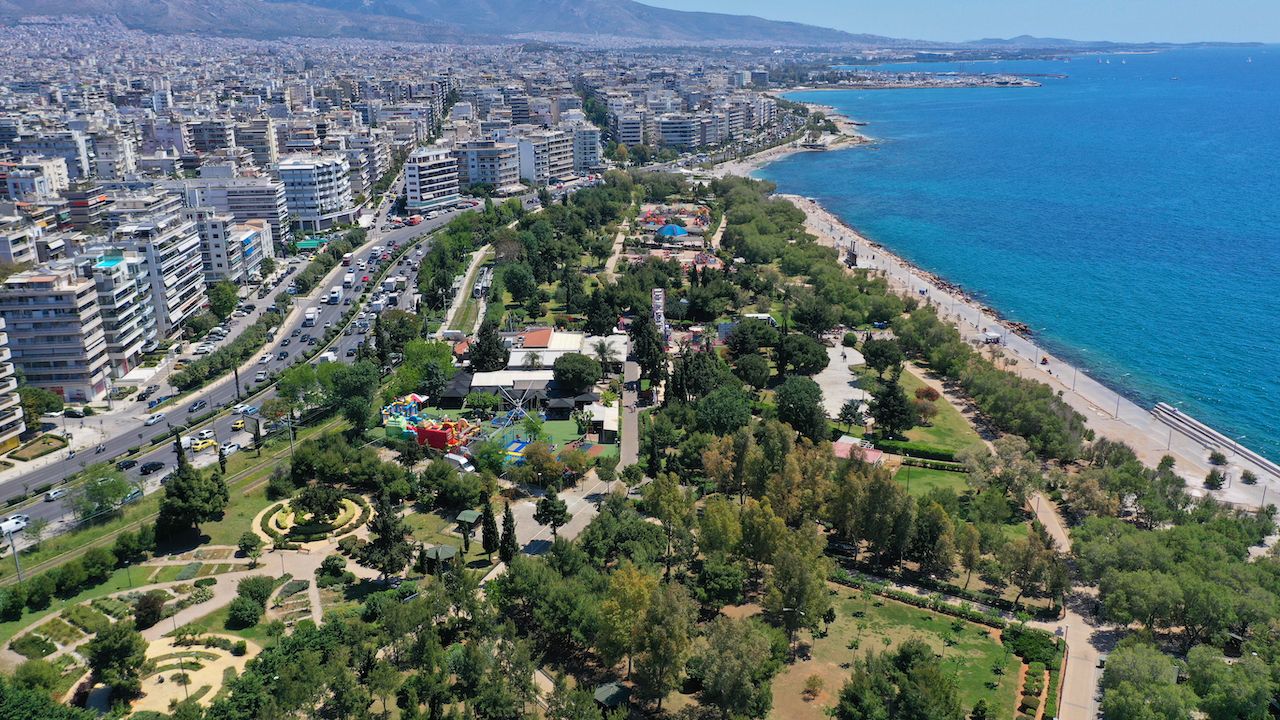 Flisvos Marina and Park — Flisvos Marina, otherwise known as the Athens Riviera, is the most upscale harbor on the easily accessible coastal zone of Athens, five miles away from downtown. The top-notch dining, shopping, and recreational facilities are both for yacht owners and visitors to enjoy while savoring views of the Mediterranean. The tree-lined promenade is a popular trail for morning and evening runners alike, as well as cyclists. There’s a kiosk where you can rent regular or family bicycles for up to four people.

Children between two and 12 years old will have the time of their lives in Greece’s biggest playground, which also accommodates the needs of kids with disabilities. Be aware that the playground has three entrances where children could slip away unexpectedly. Apart from the outdoor gym, if you have enough players, you can have your very own soccer or basketball game in one of the mini courts.

Attiko Alsos — The main reason to come to the forest of Attiko Alsos is to marvel at the views of the whole city — including the port area of Piraeus — from some of Athens’ highest hills, which reach up to 1,000 feet. It takes about two hours to explore this natural habitat in the northern suburbs of Athens. If you have more time on your hands, you can add tennis, volleyball, soccer, or basketball to your expedition with one of the many free-entry courts.

Don’t wander around in this isolated and mountainous area at night. However, you can stay until 3:00 AM at the Yades restaurant inside the park, or Zafiro just outside the entrance, and gaze at the sparkling night views. One of Athenians’ favorite pastimes during the summer is open-air cinemas. Attiko Alsos, or Attiko Grove, is home to a picturesque open-air movie theater framed with jasmine and ivy plants. Don’t be fooled by the heat in the center of Athens; here, even the warmest nights can be chilly thanks to the hilltop breeze. 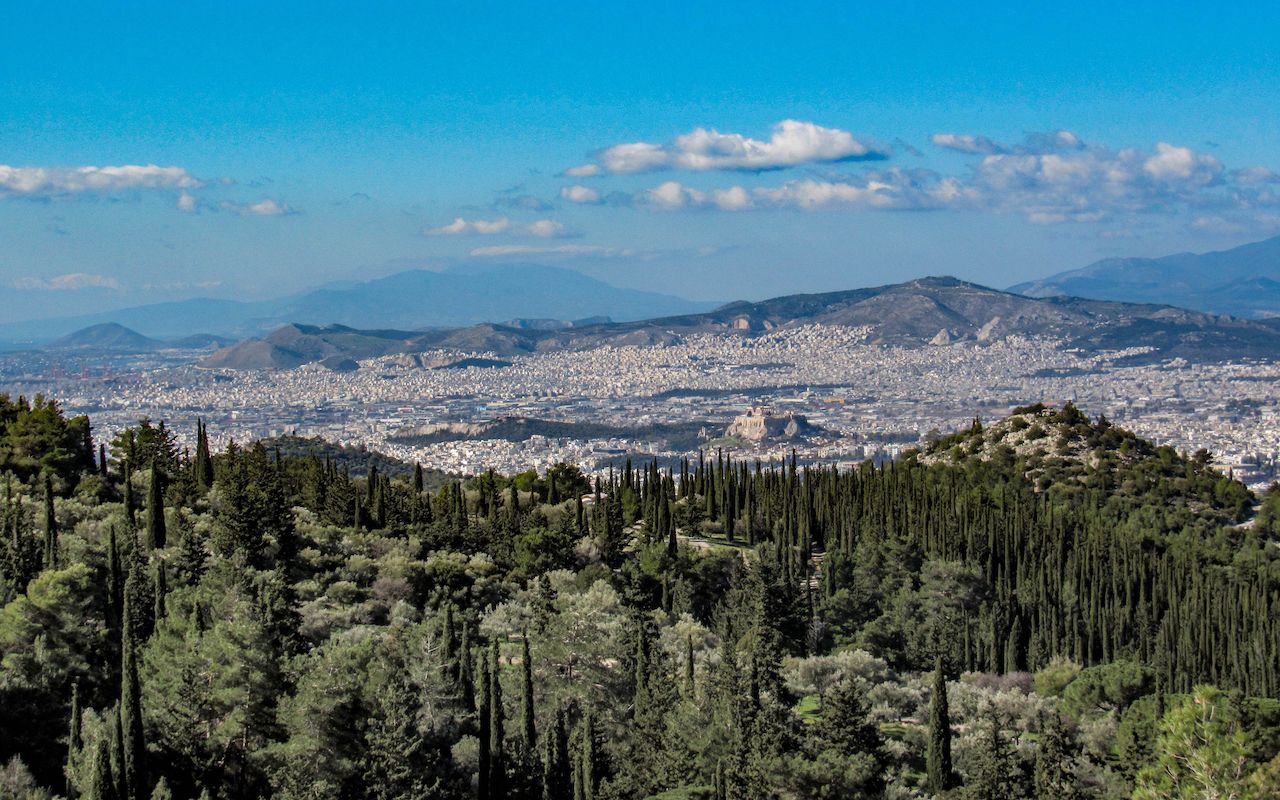 Hymettus (Aesthetic Forest) — Hymettus is a 10-mile-long rocky mountain range that stretches from the northern suburbs of Athens all the way to the south chic neighborhood of Glyfada. From atop the mountain, you can see the built-up urban areas that surround it, the international airport, and the mountains of Parnitha and Pentelicus. Hymettus is home to a man-made Aesthetic Forest, in which there is an olive grove and a small vineyard with grapes from Santorini.

The forest, which is located in Athen’s northern area of Papagou, is a bird watcher’s delight as there are 104 different bird species. Hymettus is one of Athenians’ favorite places to unwind on a sunny day because it caters to all ages and types of outdoors people. There are many hiking and bicycle trails of all levels of difficulty, numerous viewpoints where you can have a picnic, and abundant flora and fauna. Just be careful of reptiles, including the venomous viper snake.

To indulge in the myths of Hymettus, stop at the medieval Kaisariani Monastery on the western slope of the mountain. If you hike during the summer months, start early in the morning and choose shaded paths. Most routes are suitable for walking tours and don’t require any equipment apart from water and snacks.