Athens is obviously a hot spot of art and culture — it is the cradle of Western civilization, after all. There are archaeological sites, museums, and beautiful examples of Roman and Byzantine architecture just about everywhere you look, most of which need to be checked out if you really want to understand the city. But Athens is not stuck in its glorious past. Especially since the 2009 economic crisis, there has been an explosion in the creative space driven by a forward-thinking youth, creating diversity and modernity in the cultural offerings. Here’s a list of the best art and culture spots that Athens has to offer. 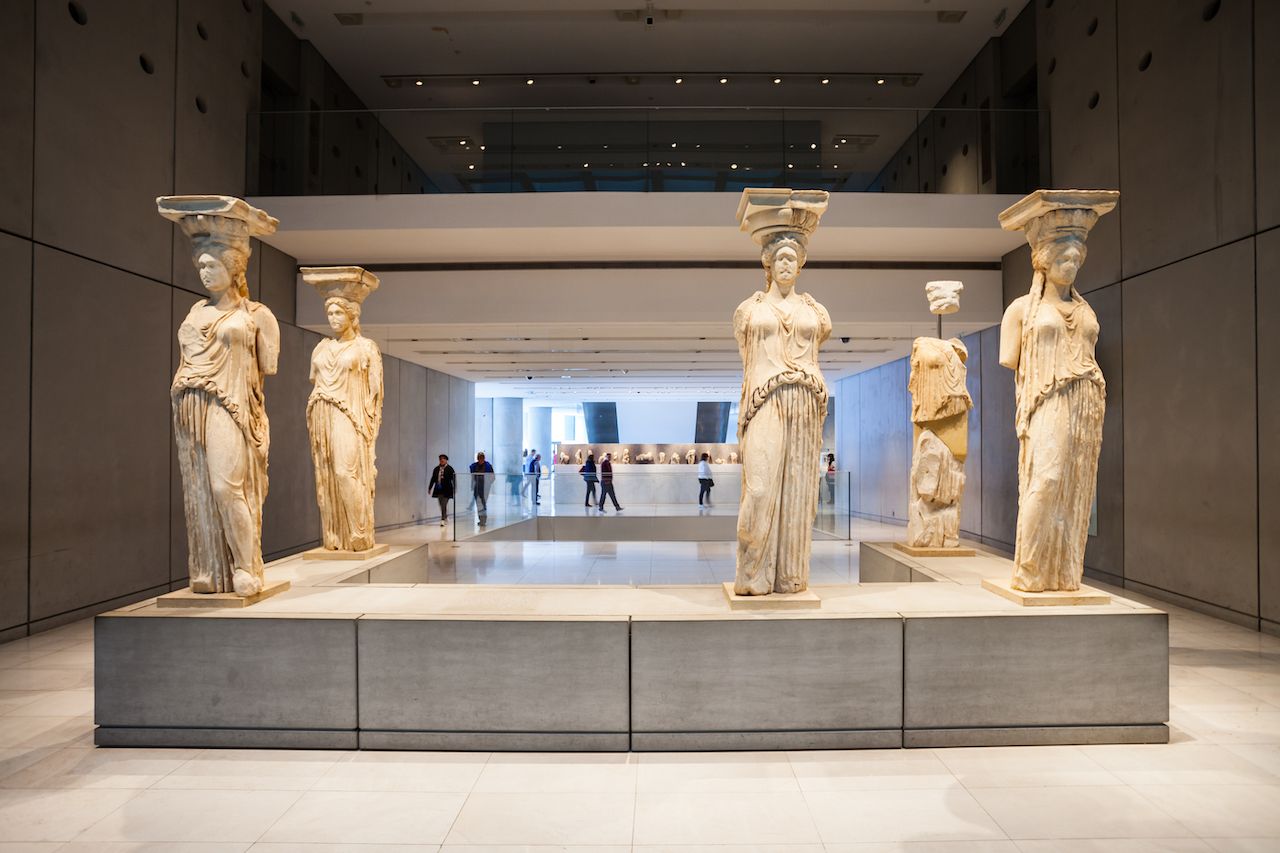 Acropolis Museum — If you only visit one museum in Athens, make it this one. Since its inauguration in 2009, the Acropolis Museum has become the most visited museum in Athens, and it’s very deserving of the attention. Wander around and check out the transparent floors for a unique perspective of the excavation sites, as well as the incredibly well-preserved marble statues, which can be observed from all sides. On weekends, Athenians love to meet at the museum café and restaurant, which has unobscured views of the Acropolis.

On Fridays, gourmet dishes and exceptional wine are served until midnight. If you are with children, check out the LEGO Acropolis model made of 120,000 bricks on the second floor. We recommend coming here first to learn about the history of Acropolis, then climbing to the site. For an intensive history lesson, watch the short movie playing on the top floor. Allow at least one and a half hours for your visit. Guided tours aren’t available, but you can book an independent guide. 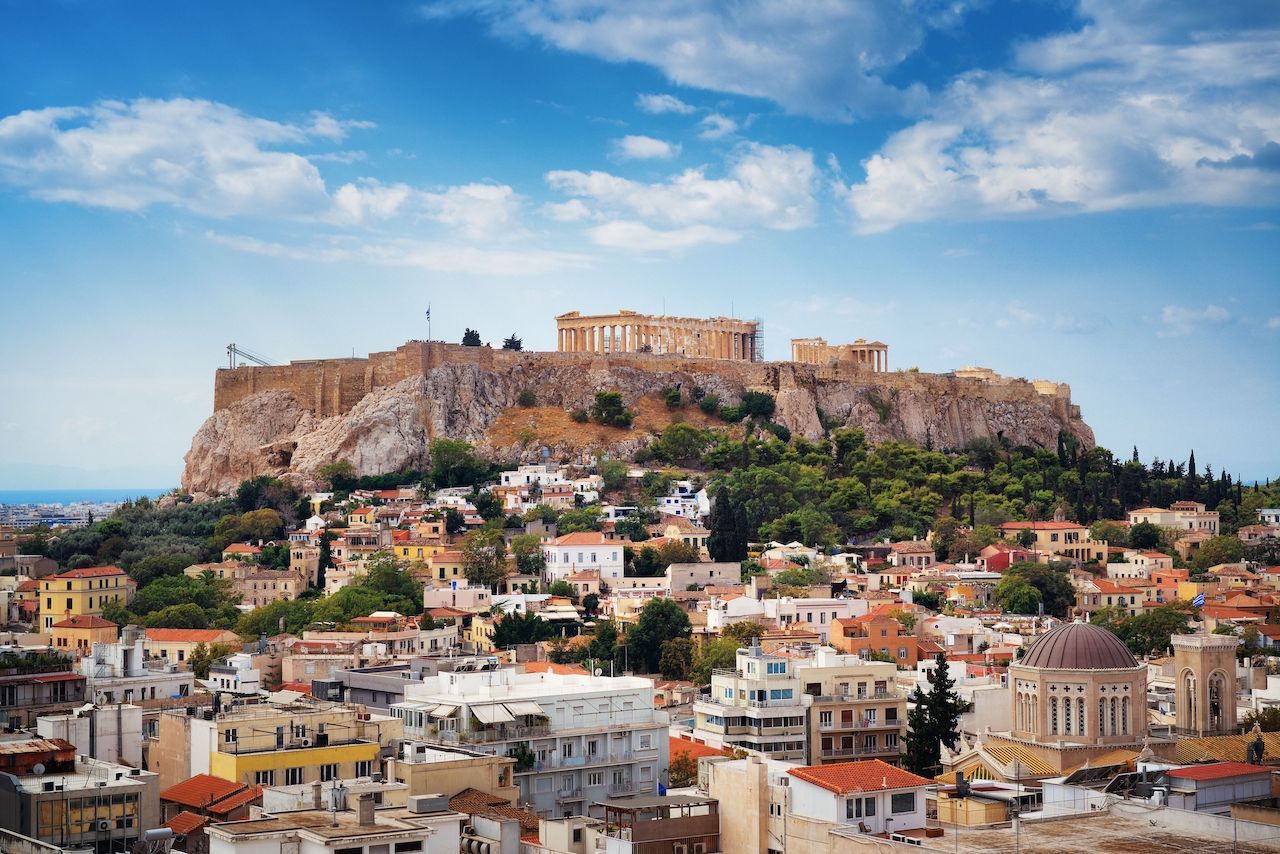 The Acropolis — The term “acropolis” means “a city built on a hill,” and that’s no euphemism. The Acropolis of Athens is impressive from all vantage points, but you must climb for 45 minutes to the top to admire the monuments, which are all symbols of ancient Athens’ power and prosperity. The Propylaea — a 78-foot-long gate with two smaller wings — is the point of entry to the Acropolis and the highest point of the Sacred Way, which leads to the Acropolis. To the right of the Propylaea is the temple of Athena Nike. Here, citizens worshipped the goddess of Victory hoping for an ending of the war against the Spartans. The Erechtheion on the north side of the Acropolis is a temple dedicated to Athena and Poseidon, famous for the Porch of the Maidens, composed of six female statues which act as supporting pillars for the roof. Last, the symbol of ancient Greece, the Parthenon — a temple dedicated to Athena, the patron of the city.

Wear comfortable shoes and beware of the slippery worn rocks. In the summer, start climbing as soon as the site opens (8:00 AM) as it gets scorching and very bright at the top. Also, remember to pack your hat, sunscreen, water, and snacks. On a clear day, you may see the ships leaving and coming to Piraeus port and the mountains of Peloponnese. Consider buying the multi-site ticket, which includes entrance to the Acropolis and six more archaeological sites (Temple of Zeus, Ancient Agora, Roman Agora, Hadrian’s Library, Keramikos, and the Lyceum of Aristotle). This ticket is valid for five consecutive days for $34. Alternatively, you can purchase a single ticket for the Acropolis for $22. No matter what ticket you choose, buy your tickets online to avoid the long lines. If you have mobility difficulties, there’s an elevator to the top, but you must inquire at the entrance. 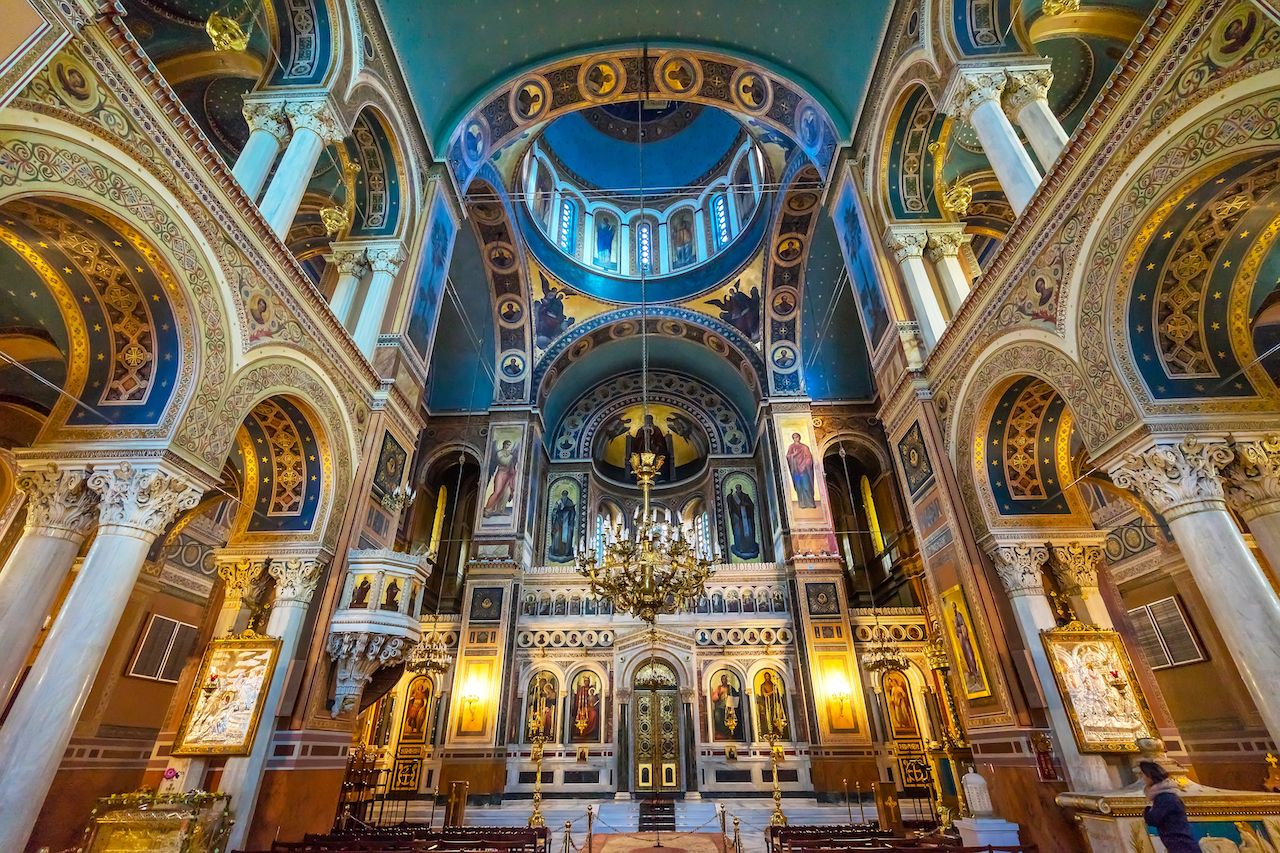 Metropolitan Cathedral of Athens — Greek Orthodoxy, which is the result of the schism from the Catholic Church in 1054, has played a significant role in Greece’s history. During turbulent periods like the rule of the Ottoman Empire between the 15th and 19th centuries, World War II, and the civil war (1946-1949), Orthodox Christianity kept the morale of the Greeks high. Even though for younger generations religion in Greece is more a matter of tradition and cultural identity than systematic participation, Christianity remains closely interlinked with politics and education.

The Metropolitan Cathedral of Athens, which is located between the metro stations of Syntagma and Monastiraki, took 20 years (1842-1862) to build due to limited funding. The initial architect of the cathedral was a Dane, Theophil Hansen, who was also responsible for other 19th-century landmarks in the city, such as the National Library and the University of Athens. After Hansen’s departure from Greece, two new architects took over. The inconsistency between Hansen’s neoclassical influences and his successors’ Byzantine elements is evident in the cathedral’s exterior. But the Metropolitan Cathedral of Athens is noteworthy for its excessive inner decoration. From floor to ceiling, the walls are covered with colorful illustrations, narrating the life stories of saints and characters from the Bible. The Byzantine-like icons on the templon are by German artist Alexander Maximilian Seitz and Greek Spyros Gialinnas. The damaging effects of the 1999 Athens earthquake lead to the renovation of the cathedral, which has only recently been finalized. The entrance is free, but note that modest attire is required. 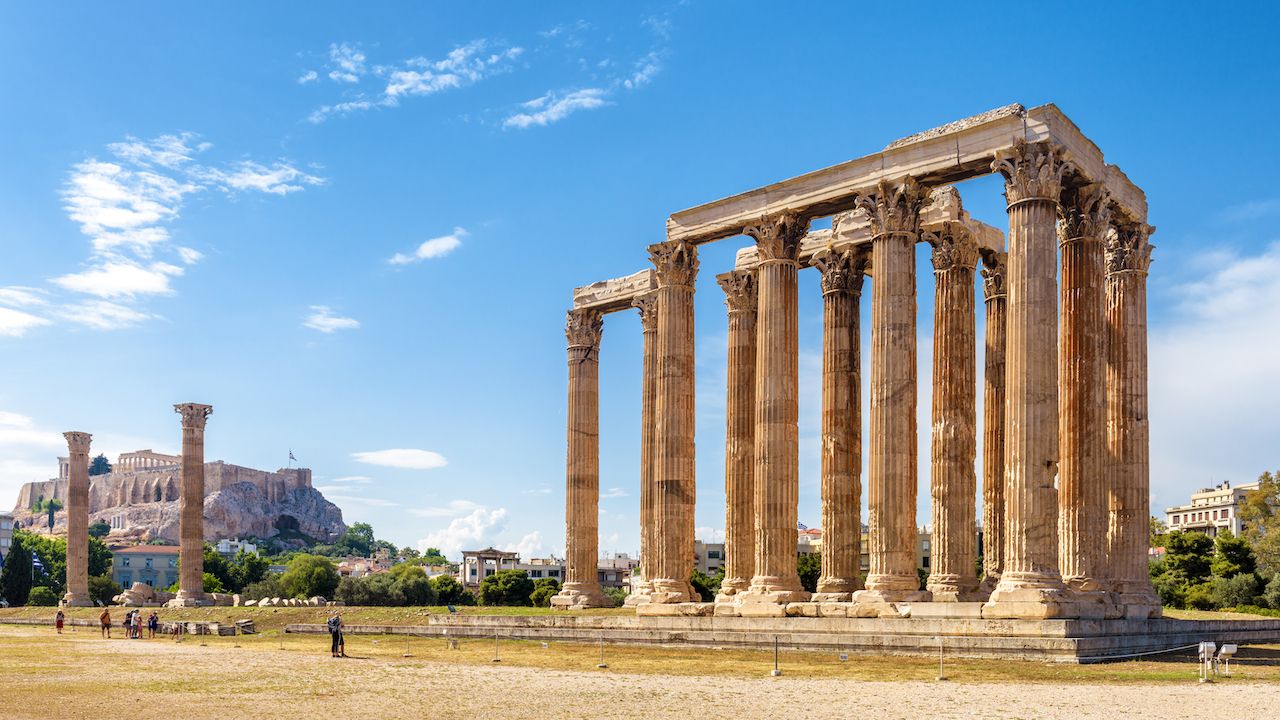 The Temple of Zeus and the Hadrian Arch — The construction of the Temple of Zeus lasted 650 years (between the sixth century BC and second century AD), until the Roman Emperor Hadrian finalized all works. During Roman times, The Temple of Zeus was home to one of the biggest religious statues of the ancient world. Unfortunately, there are no remains of the golden and ivory statue of Zeus.

In the third century AD, the temple was looted, and the ruins were used as building material for other structures. Today, the archaeological site has 15 standing columns and one laying on the ground due to a catastrophic storm in 1852. However, you don’t have to go inside the site to see one of Athens’ most notable landmarks. The 59-foot-tall Roman Arch of Hadrian was built in 131 AD to commemorate the arrival of the Roman emperor, who was loved for his peaceful reign and infrastructural improvements in the city. The arch is within a pedestrian-only area, located along the busy Syngrou Avenue. 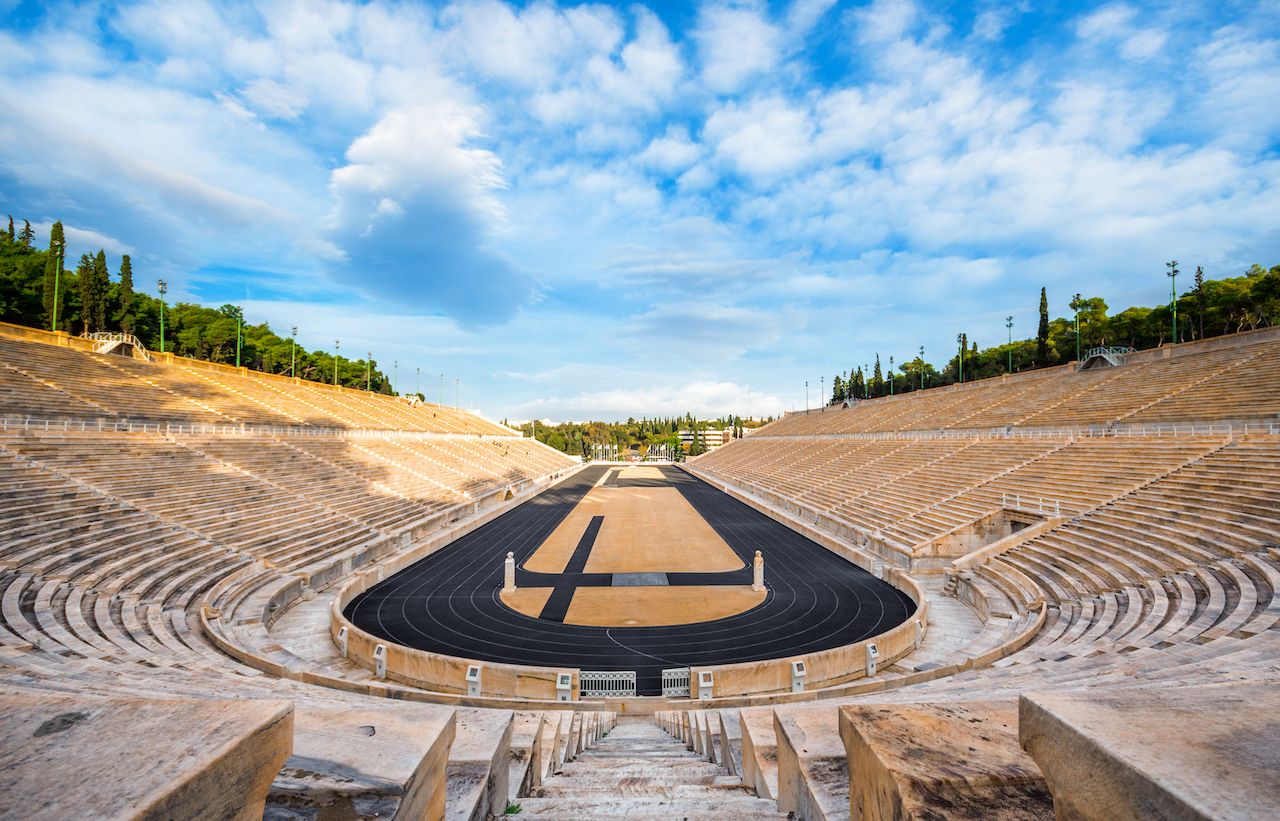 The Panathenaic Stadium — The Panathenaic Stadium or Kallimarmaro was inaugurated in 329 BC for the Panathenaea, an Athenian festival dedicated to the goddess of Athena (the goddess of wisdom and the patron of the city of Athens) with music and poetry contests. Between 140 and 144 AD, the stadium was renovated by Herodes Atticus, a Greek aristocrat and Roman senator. In 1870, an excavation revealed the horseshoe-shaped, 50,000-seat stadium. The stadium was used again in 1896 for the first modern Olympics, and it is the finishing line for the annual autumn Athens Marathon race. 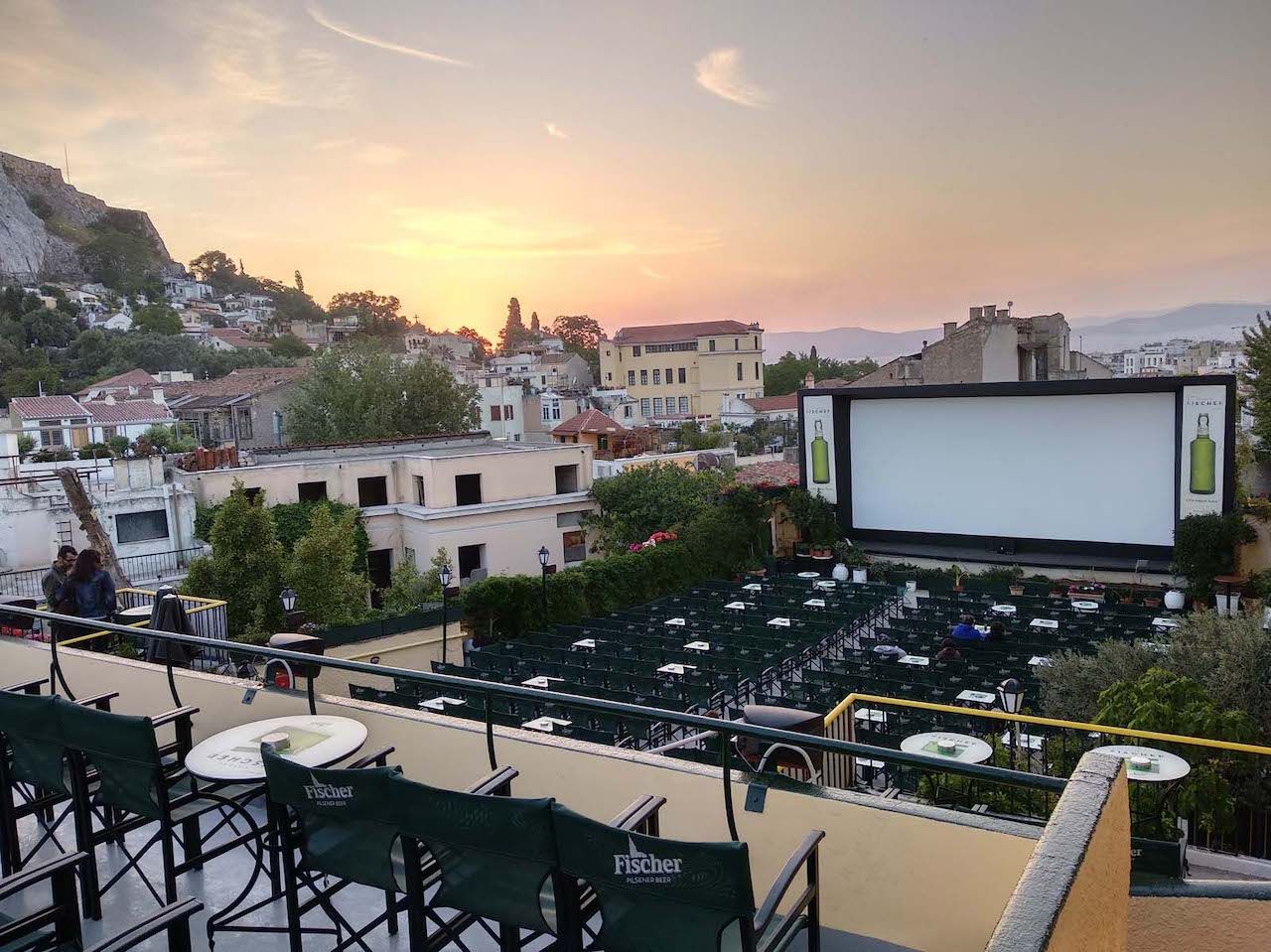 Ciné Paris Plaka — In the early 1920s, a hairdresser who used to live in Paris opened Ciné Paris, Greece’s first outdoor cinema. Ever since, open-air cinemas have been a staple of summer life in Greece. Ciné Paris closed down after 40 years of operation and reopened in 1986 to become locals’ favorite summer haunt. Located in the neighborhood of Plaka, the rooftop garden of Ciné Paris offers stunning night views of the Acropolis.

All non-Greek speaking movies are shown in their original version with Greek subtitles. The cinema is open from May to October, and the usual screening time is at 9:00 PM. Seats aren’t numbered, so arrive at least 15 minutes earlier to find a good spot. There’s an intermission after the first half of the movie to grab one more beer or snacks from the concession. Remember to have your mosquito repellent on hand and maybe a light jacket to protect you from the breeze. Cinephiles shouldn’t miss the opportunity to browse through vintage movie posters in the shop by the entrance. 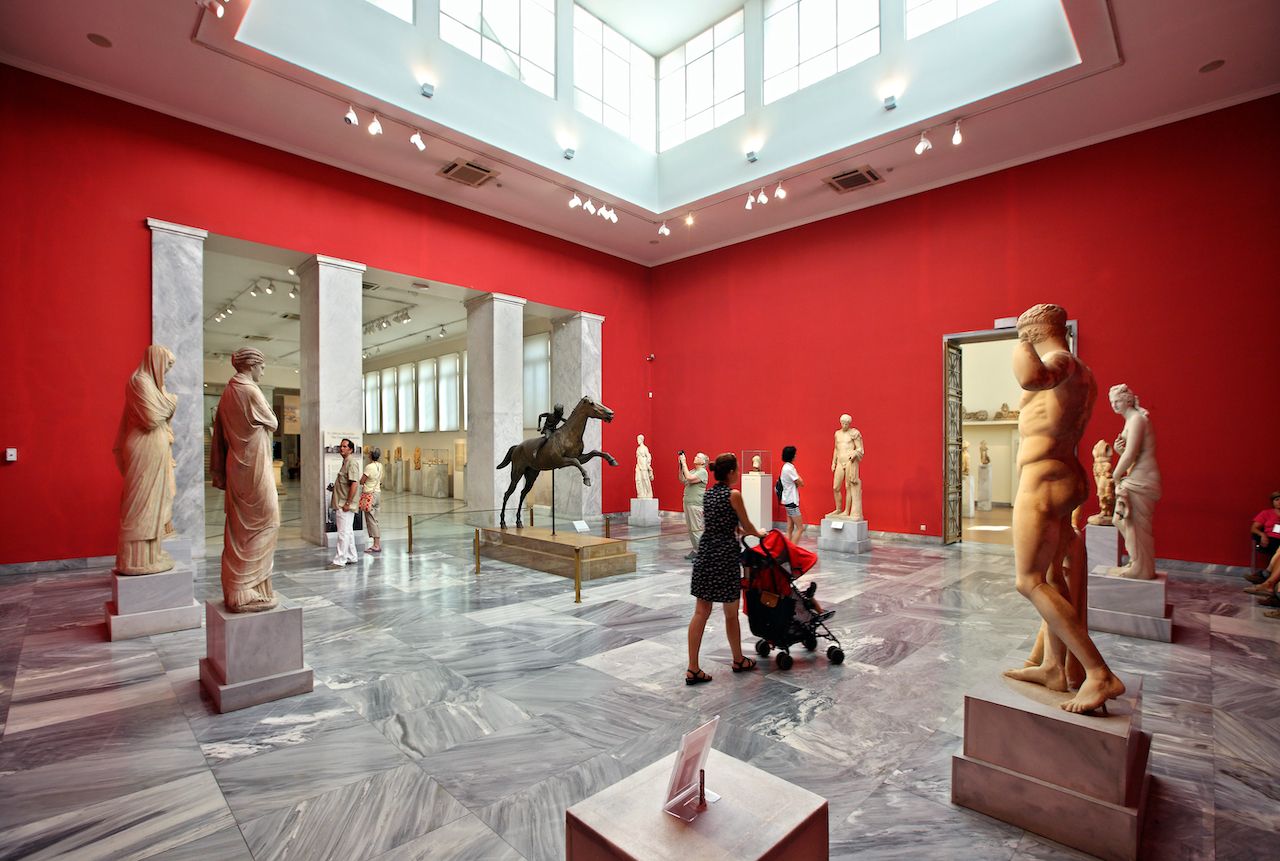 National Archaeological Museum — The National Archaeological Museum is Greece’s biggest museum, with over 11,000 items from the Neolithic to the Classical era. Statues, gold jewelry, weapons, and pottery are displayed in 65 thematic rooms, so ready yourself to spend many hours here. To make the most of your experience, we recommend the audio tour. Τhe exhibits that stand out are the gold mask from a Mycenaean royal tomb, a fully preserved maiden statue, the real-life size racehorse statue, and the first analog computer. Thanks to its central location, close to the Omonia metro station, the people of Athens regularly frequent the museum’s café, tucked away inside a lush urban garden. Occasionally, the café hosts temporary exhibitions and cultural events. 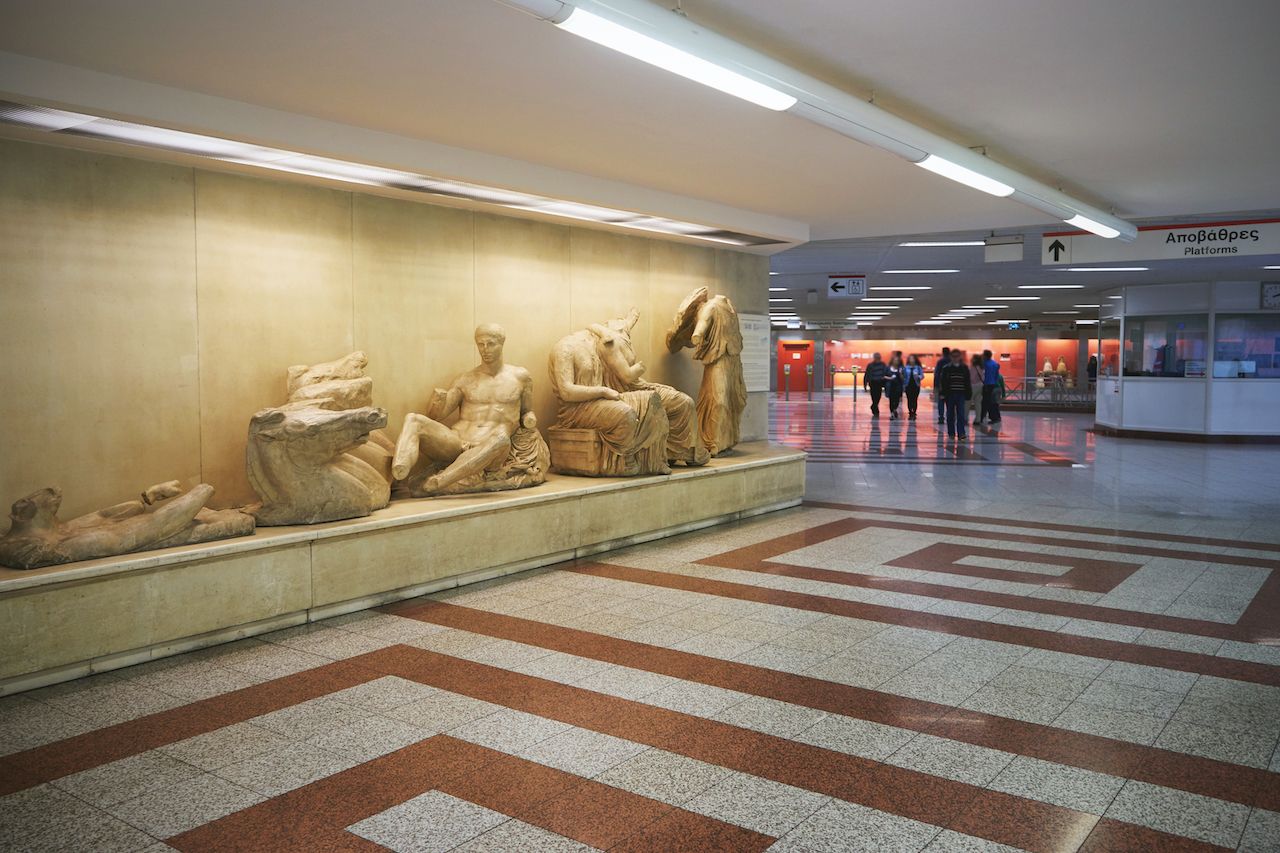 Metro stations — Apart from being very modern and reasonably priced, Athens’ metro is also known for its art displays. At Evangelismos station, on the edge of the upmarket Kolonaki neighborhood, the work of internationally recognized Chryssa catches the attention of even the most hurried commuters. At Larissa metro station, Yannis Gaïtis’ sequence of identical men questions the homogeneity of contemporary society. At Syngrou-Fix station, which serves the hipster neighborhood of Koukaki, sculptor Takis, inspired by the underground signal lights, has created a playful installation with light and colors.

Omonia station, located in Athens’ most multicultural area, inspired artist Iotoff to create a multifaceted piece named “the intersection of civilizations.” To move around Athens using public transport, you can purchase different types of MetroCards (e.g., valid for 24 hours, five days, etc.) depending on the length of your stay and planned activities. The standard card for $1.57 allows you to use any public transport or a combination for 90 consecutive minutes. 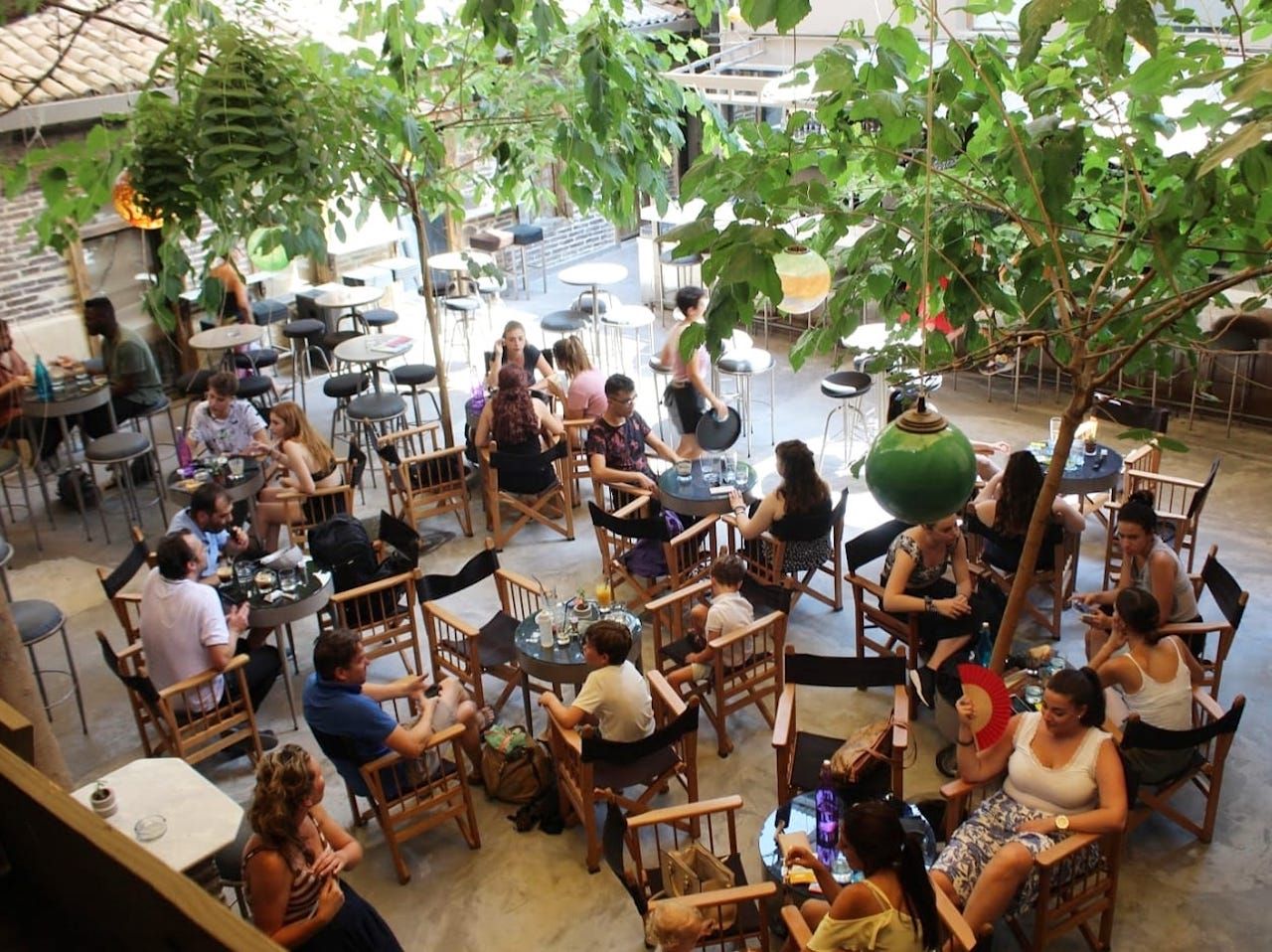 The Art Foundation (TAF) — In 2009, a creative team set up an independent cultural project in an abandoned building in the central area of Monastiraki. Today, TAF is a hot spot for the creative youth of Athens and a great alternative to Athens’ archaeological scene for visitors to the city. There is a contemporary art gallery, an art shop that supports local designers, and a bar in the middle of a shaded courtyard.