You spent day one visiting the major attractions of Athens, trying traditional food, and having your first taste of the diverse Athenian nightlife. This means that during your second day in the Greek capital, you can step off the beaten path by including some local experiences in your itinerary. Here’s a packed day two in Athens for first-time visitors or anyone looking to make the most of old and modern Athens in just two days.

If you only have two days in Athens, the optimum neighborhood to stay in is Koukaki. It’s walking distance from all the top sights but still holds onto its bohemian character. Kick your day off early with a strong coffee or a freshly pressed juice at Drupes & Drips, just four minutes away on foot from the Acropolis Museum. Don’t even try to resist the smell of baked goods coming from Takis Bakery across the street. The same family owns the bakery and the all-day cafe-bar, so it should be alright to smuggle a fluffy croissant and a nutty power bar into the cafe.

Visit the Temple of Zeus and the Hadrian Arch 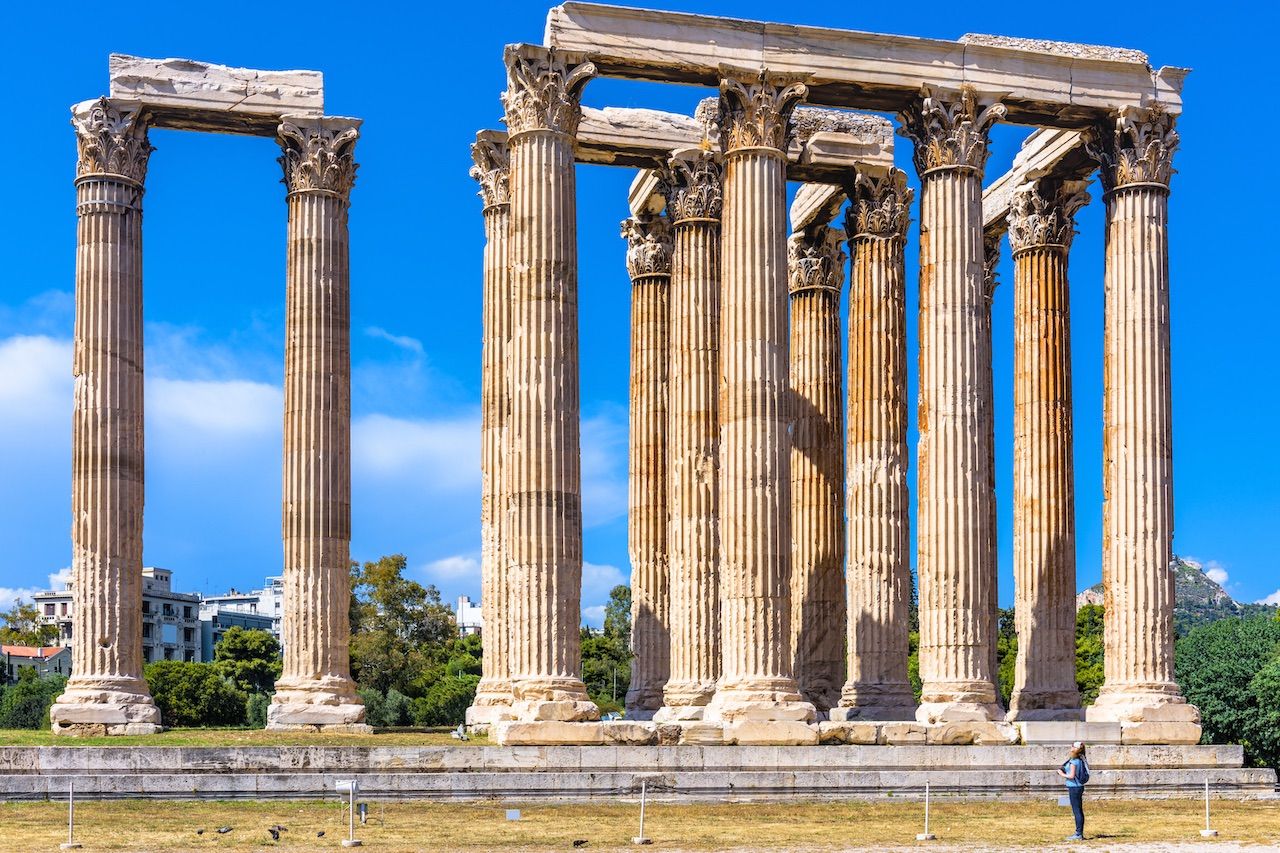 From Drupes & Drips, head to Dionysiou Areopagitou, a pedestrian-only street. Pass the Acropolis Museum on your right-hand side and walk down to Andrea Syngrou Avenue. The massive columns you see are the ruins of the ancient Temple of Zeus. Outside the archaeological site is one of Athens’ most prominent landmarks: the Roman Arch of Hadrian.

Be a champion at the Panathenaic Stadium 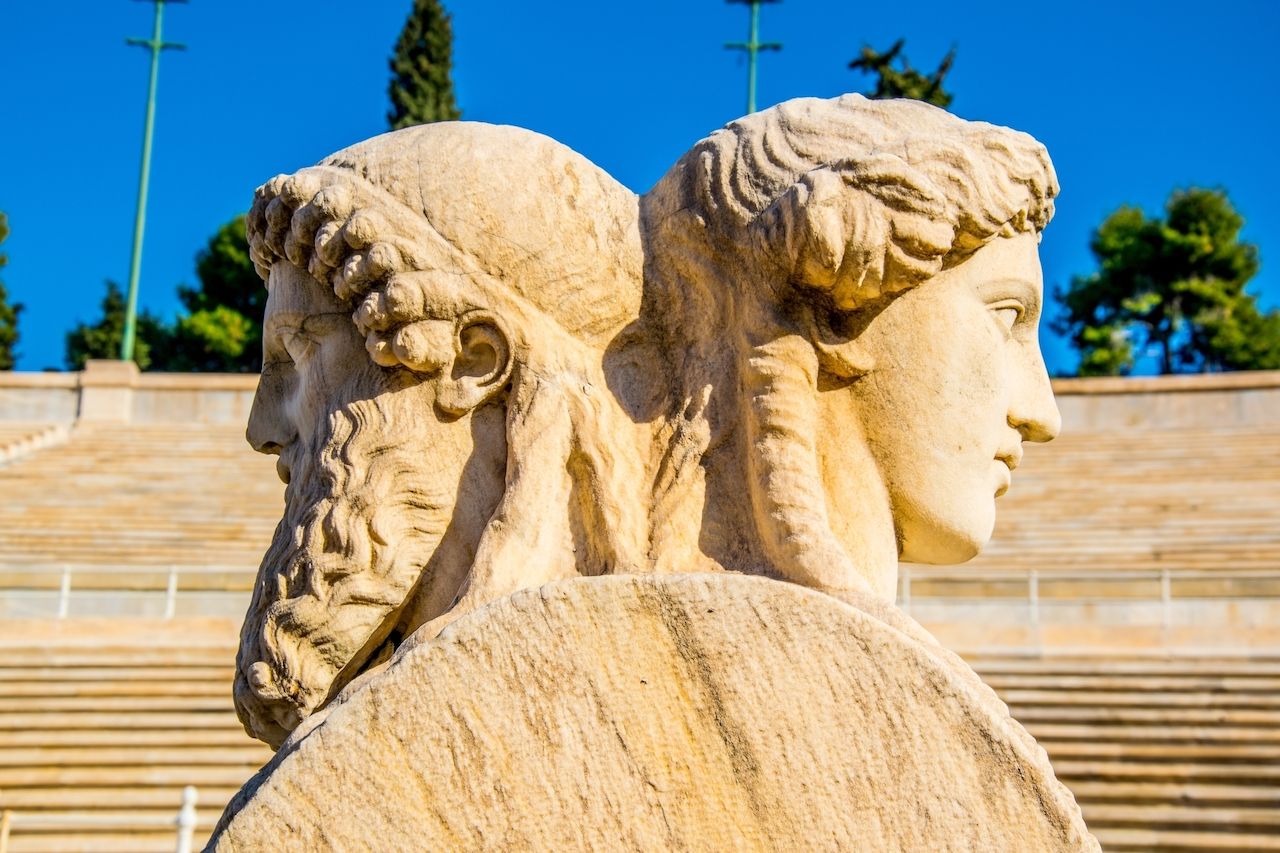 From Hadrian’s Arch turn right onto Vasilissis Olgas Avenue, walk down until it meets Vasileos Konstantinou Avenue, and then turn left. Walk about 500 feet along Vasileos Konstantinou until you are in front of the Panathenaic Stadium, which is also known as Kallimarmaro. Built in 329 BC, this is where the first modern Olympics took place in 1896. The fun and interactive audio tour of the monument is strongly recommended.

Rest at the National Garden 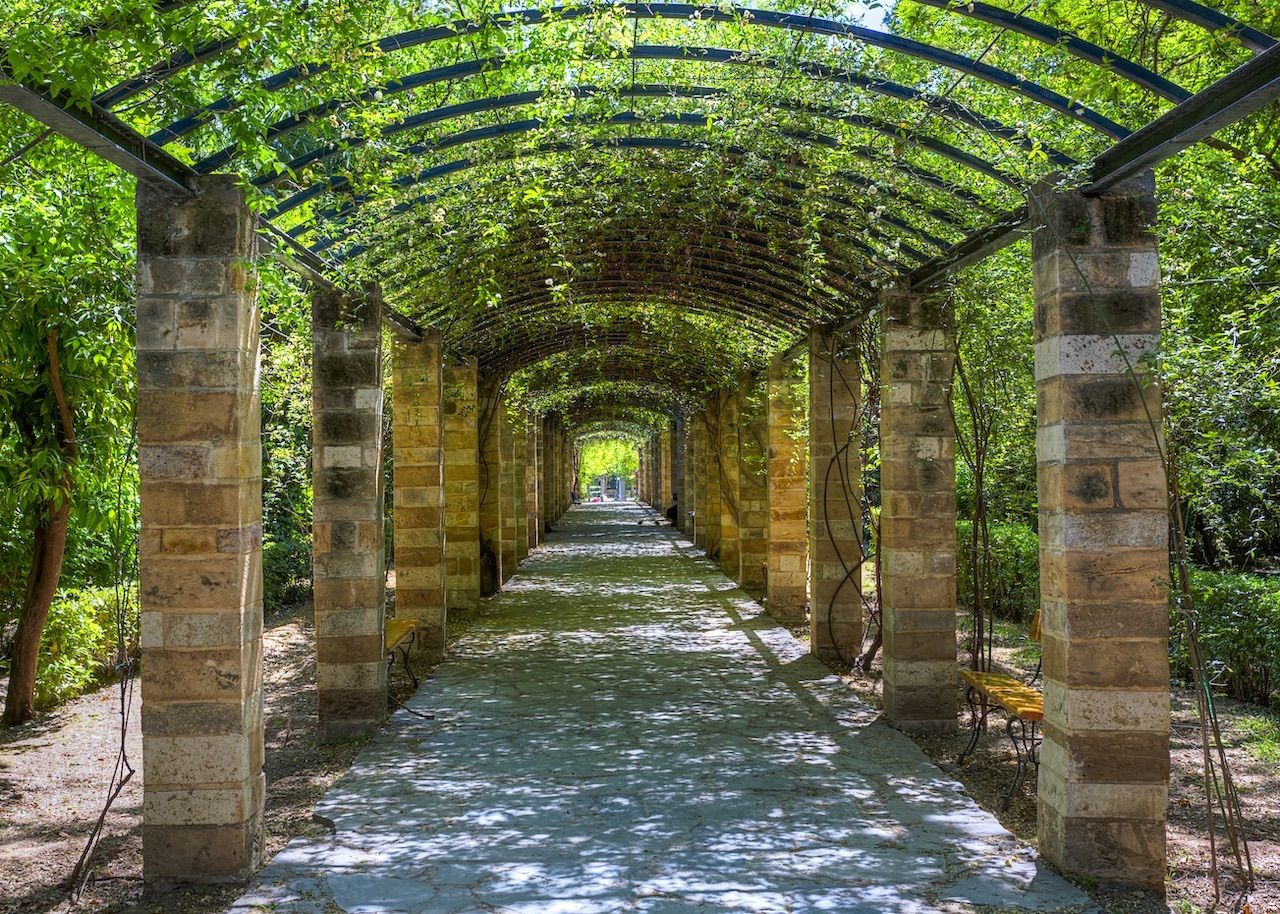 Exit the Panathenaic Stadium and walk toward Irodou Attikou Street, which is directly opposite. Once on it walk for about 10 minutes until you get to the entrance of the National Garden. Unsurprisingly, the National Garden’s history dates back to ancient Greece. However, today it is praised as a European model of 19th-century landscape architecture. A stroll in the natural surrounding will put your mind at ease and whet your appetite. 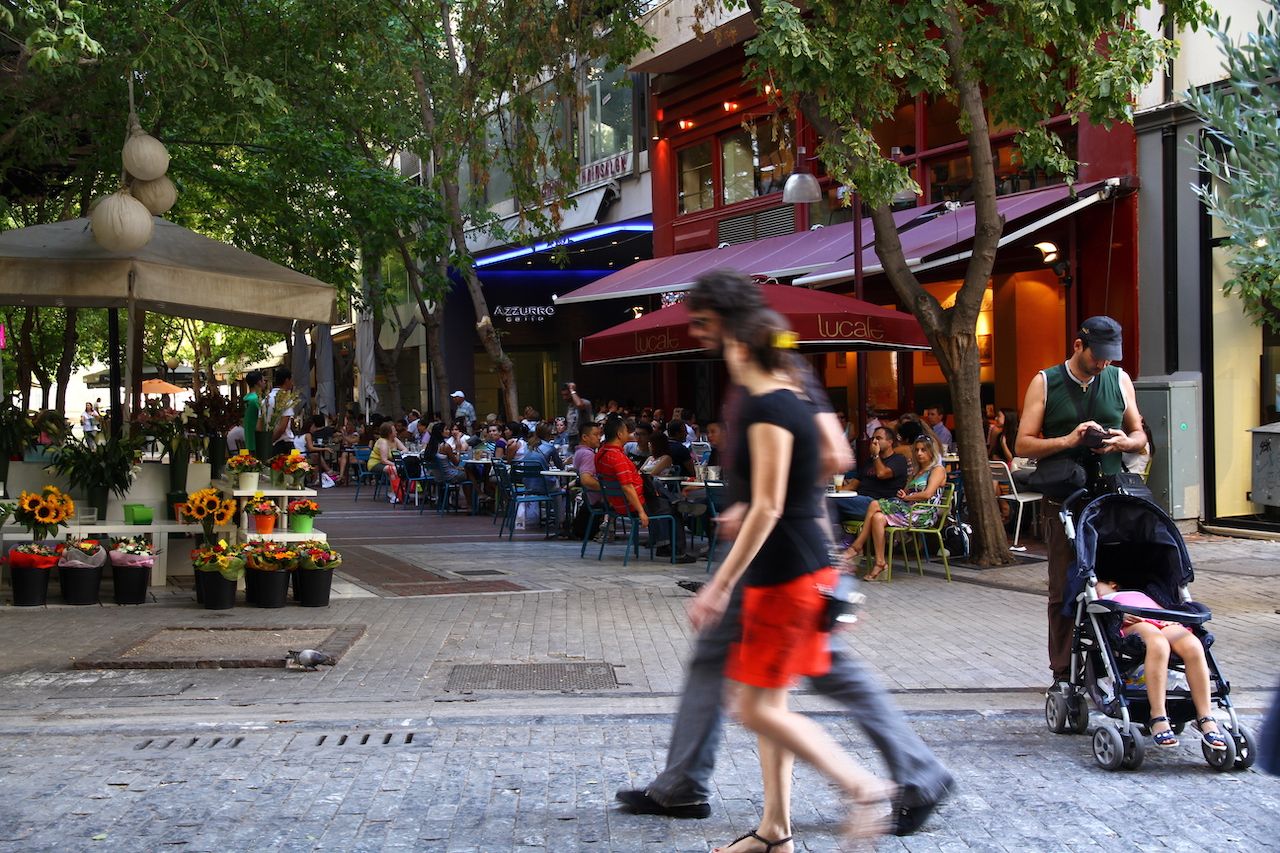 Kolonaki is the neighborhood of the Athenian bourgeois, notorious for its haute couture boutiques, shoe emporiums, and contemporary art galleries. In Kolonaki, the choice of trendy bars and gourmet restaurants is endless. For Greek food, stop at Kiouzin, but keep in mind that the majority of the main dishes aren’t vegetarian. Zurbaran serves international cuisine. Kolonaki also has Peruvian, Indian, Spanish, Italian, and Japanese restaurants. 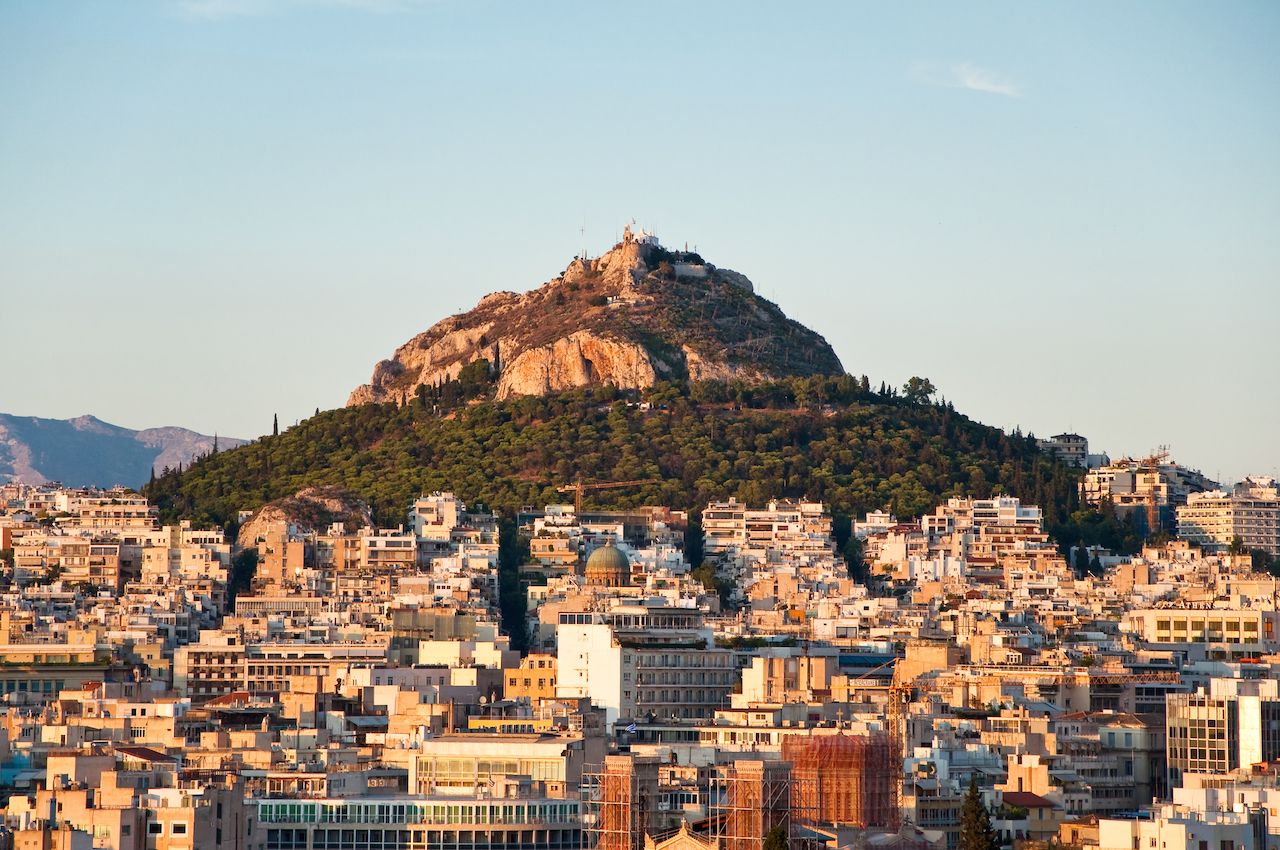 Towering above Kolonaki, Lycabettus Hill is the highest spot of Athens at 909 feet. The hill has mythical origins. The story goes that the goddess Athena dropped a rock in shock after receiving bad news. Offering some of the most stunning, free views of Athens, which extend to the port of Piraeus and the Saronic Gulf, the hill is a favorite hangout among tourists and locals alike. You can drive, walk, or take the funicular to the top. 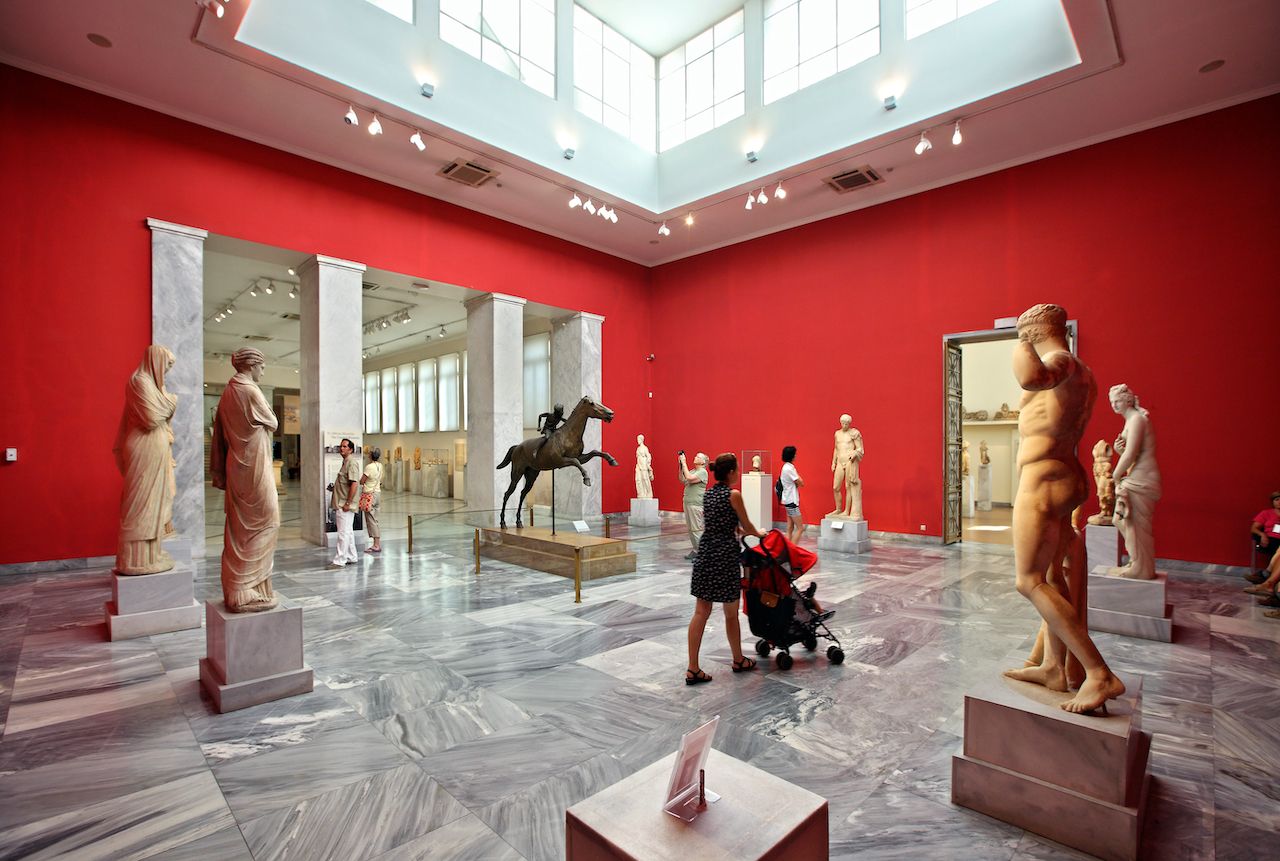 The walk to the National Archaeological Museum on 28th Octovriou Avenue (also known as Patission Street) from the bottom of Lycabettus Hill is about 20 minutes, so a taxi here could be a good option. With 11,000 exhibits spread over 65 halls, NAM is Greece’s biggest museum, where one can easily spend a whole day. However, there are some must-see exhibits such as the gold mask from a Mycenaean royal tomb, a fully preserved maiden statue, a life-size racehorse statue, and the first analog computer. Note that between November and April the museum stays open late on Tuesdays only. 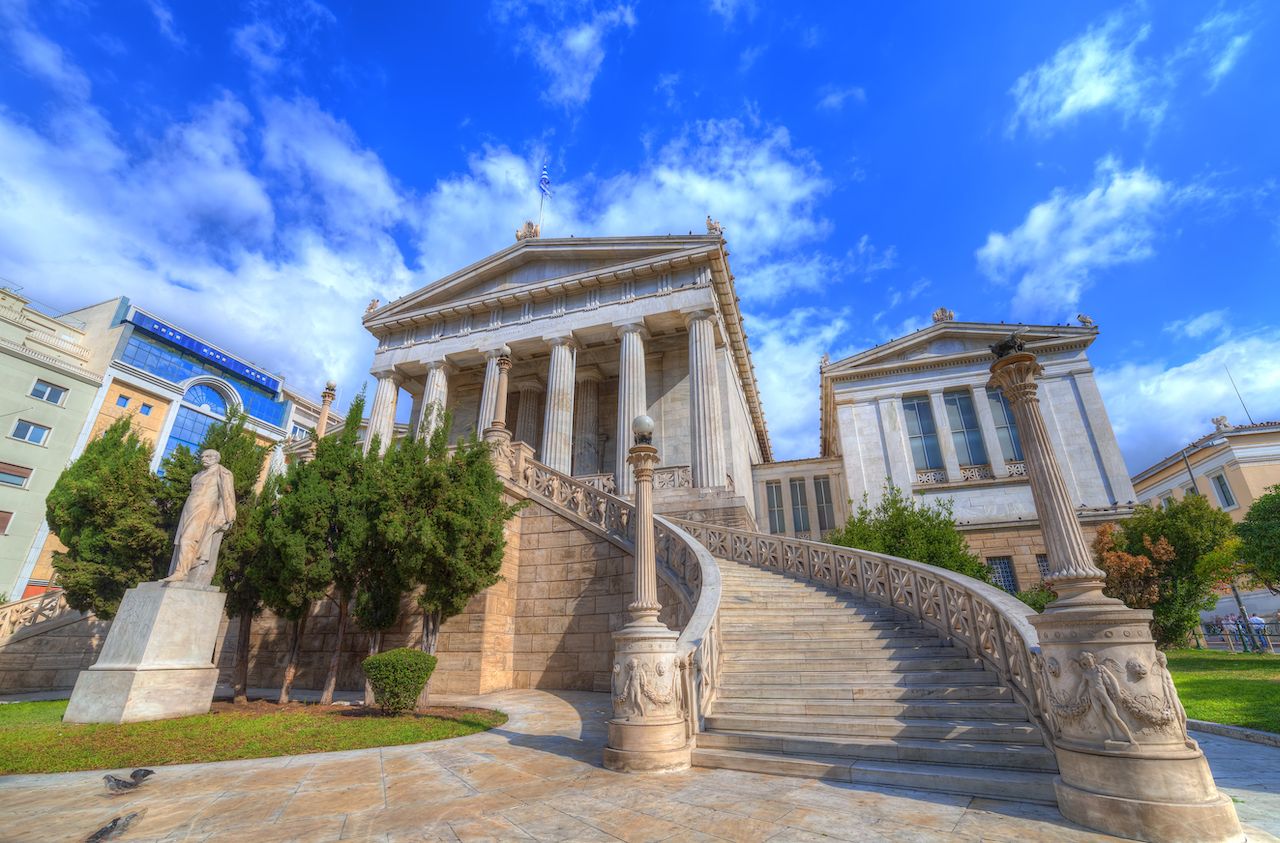 Panepistimiou Avenue (or Eleftheriou Venizelou) is a one-way boulevard that connects Syntagma Square with Omonia. As you head down the sidewalk, which is unusually wide by Greek standards, check out the historical buildings along the way. On the left-hand side, walking in the direction to Syntagma Square, you should be able to spot the neoclassical trilogy made up of the National Library, Academy of Athens, and the University of Athens — although only the university administration is based in that building today.

Wrap up the day at Syntagma 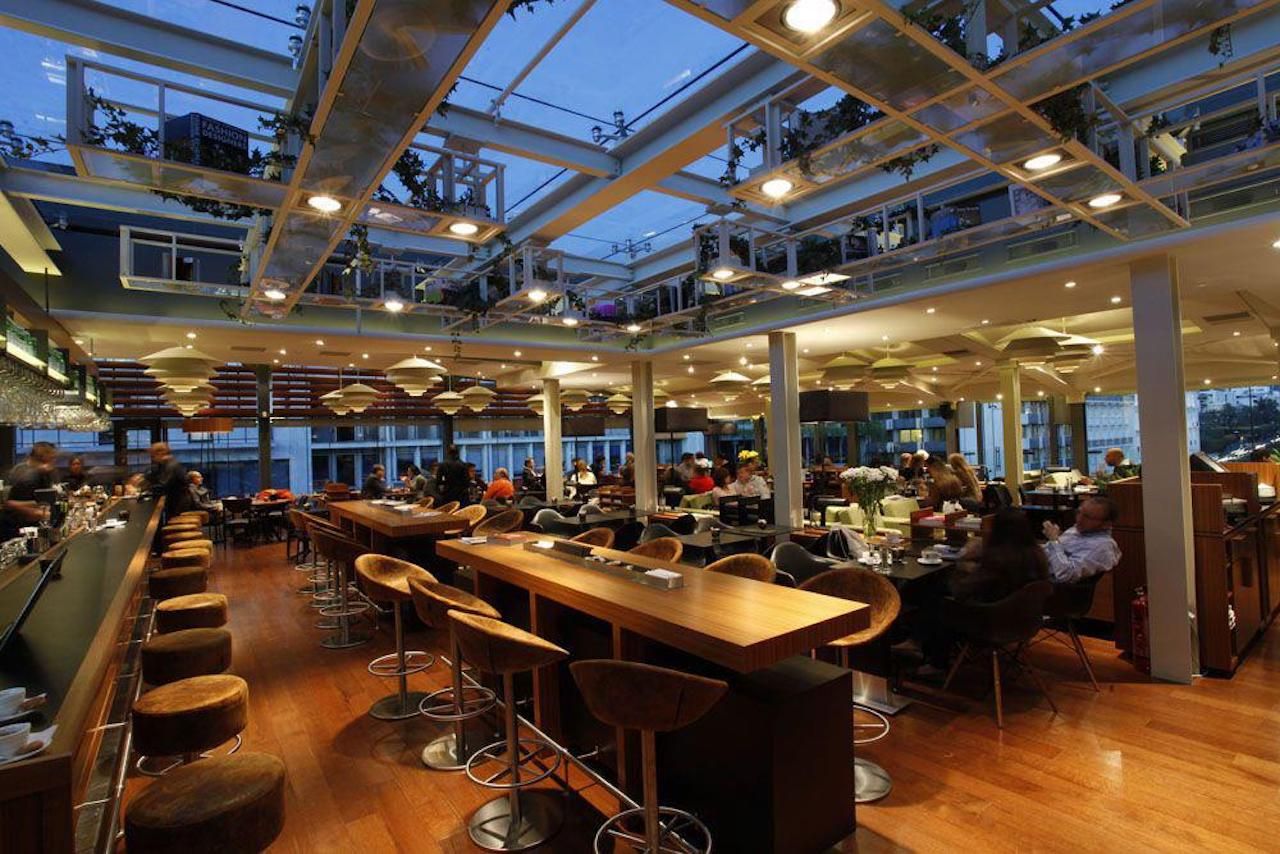 On the corner of Panepistimiou Avenue and Vasileos Georgiou Street, opposite Syntagma Square, is the five-star hotel Grande Bretagne. If you want to splurge, head to the rooftop restaurant and bar overlooking the Acropolis, ask the sommelier for the perfect wine to accompany the Mediterranean risotto with smoked mozzarella. Another option for dinner with a view in Syntagma Square for a slightly lower price, try Public Cafe. You could always head back to the Grande Bretagne after dinner for a drink at its Alexander’s Bar. Order the Mandarin Napoleon Select signature cocktail. Best to book reservations in advance for all of these options.