The world’s museums have reopened, but not everyone feels confident to head abroad and visit the Louvre, the British Museum, or Amsterdam’s Rijksmuseum just yet. While you have the option to take a virtual museum tour, you might also enjoy stepping away from the screen for once and focus on creating your own masterpiece with a fine art jigsaw puzzle.

There are many fine art jigsaw puzzles out there in a variety of styles — Pop Art, Surrealism, abstract Art Deco, etc. — from artists from all over the world. The best part? It costs less than $25 to recreate some of the world’s most famous works of art at home with your family.

We hope you love the puzzles we recommend! Just so you know, Matador may collect a small commission from the links on this page if you decide to buy a puzzle from this selection. Listed prices are accurate as of the time of publication.

John Duncan, leader of the Celtic Revival art movement in Scotland, depicted the legend of the Irish Saint Brigid (known as Bride in Scotland) in painting in 1913. The myth says that Saint Bride was carried by angels above the seas to Bethlehem to attend the birth of Jesus Christ.

The piece is filled with intricate details, such as the richly colored wings of the angels and their robes decorated with scenes from the life of Jesus, a seal bobbing in the waves, and birds following the sacred convoy. You’ll be able to see all the elements that make this artwork so captivating by working on the high-quality 500-piece fine art jigsaw puzzle by Pomegranate. It’s not a difficult puzzle to put together and all the members of the family can help assemble it in a matter of a few days.

Where can I see John Duncan’s “Saint Bride” in real life? 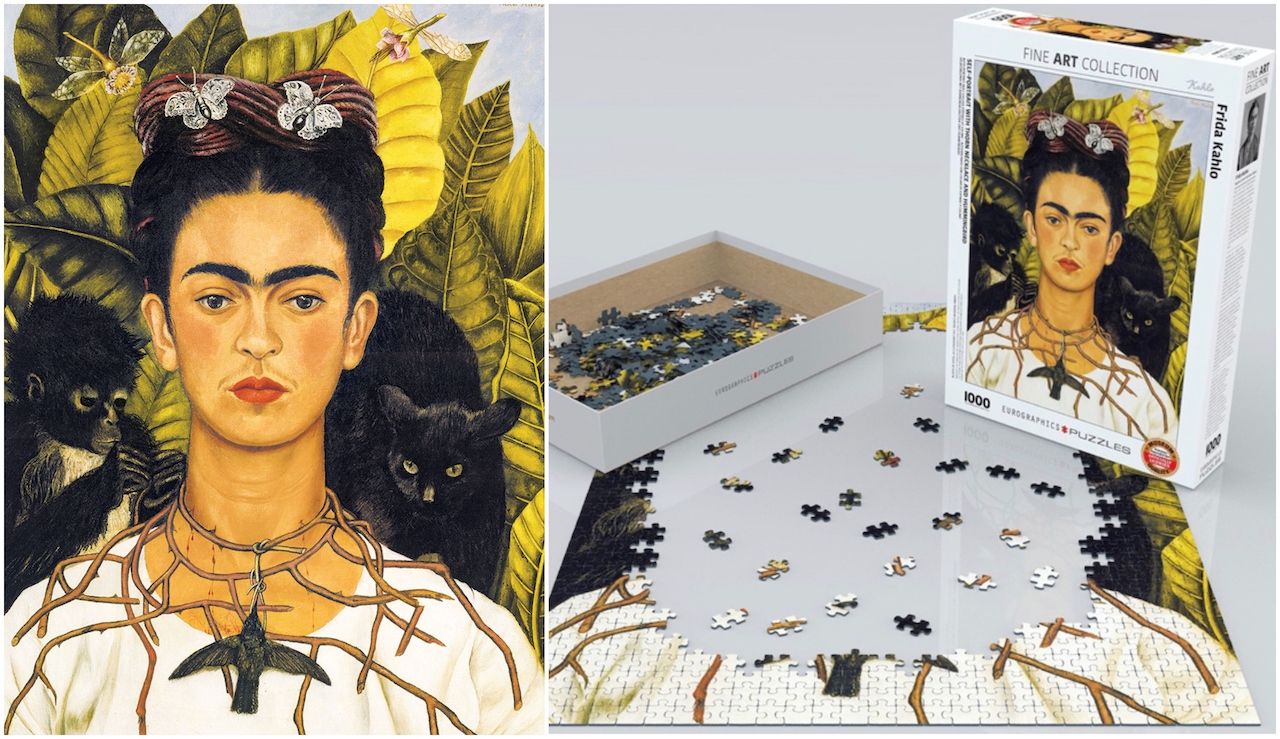 Frida Kahlo was a Mexican surrealist painter who lived during the first half of the 20th century. Poor health as a child and a bus accident as a young woman led Kahlo to experience life-long physical and emotional pain, recurrently depicted in her art. Throughout her life, Kahlo painted 55 self-portraits, including “Self-Portrait with Thorn Necklace and Hummingbird” in 1940.

This particular piece illustrates Kahlo’s strength in the face of suffering. It includes vivid colors, organic elements, and animals, as is so often the case with her work. In this self-portrait, the artist is shown with her iconic hairdo and bushy eyebrows, which you’ll be able to see up close as you put together the pieces of this fine art jigsaw puzzle by Eurographics.

Where can I see Frida Kahlo’s “Self-Portrait with Thorn Necklace and Hummingbird” in real life? 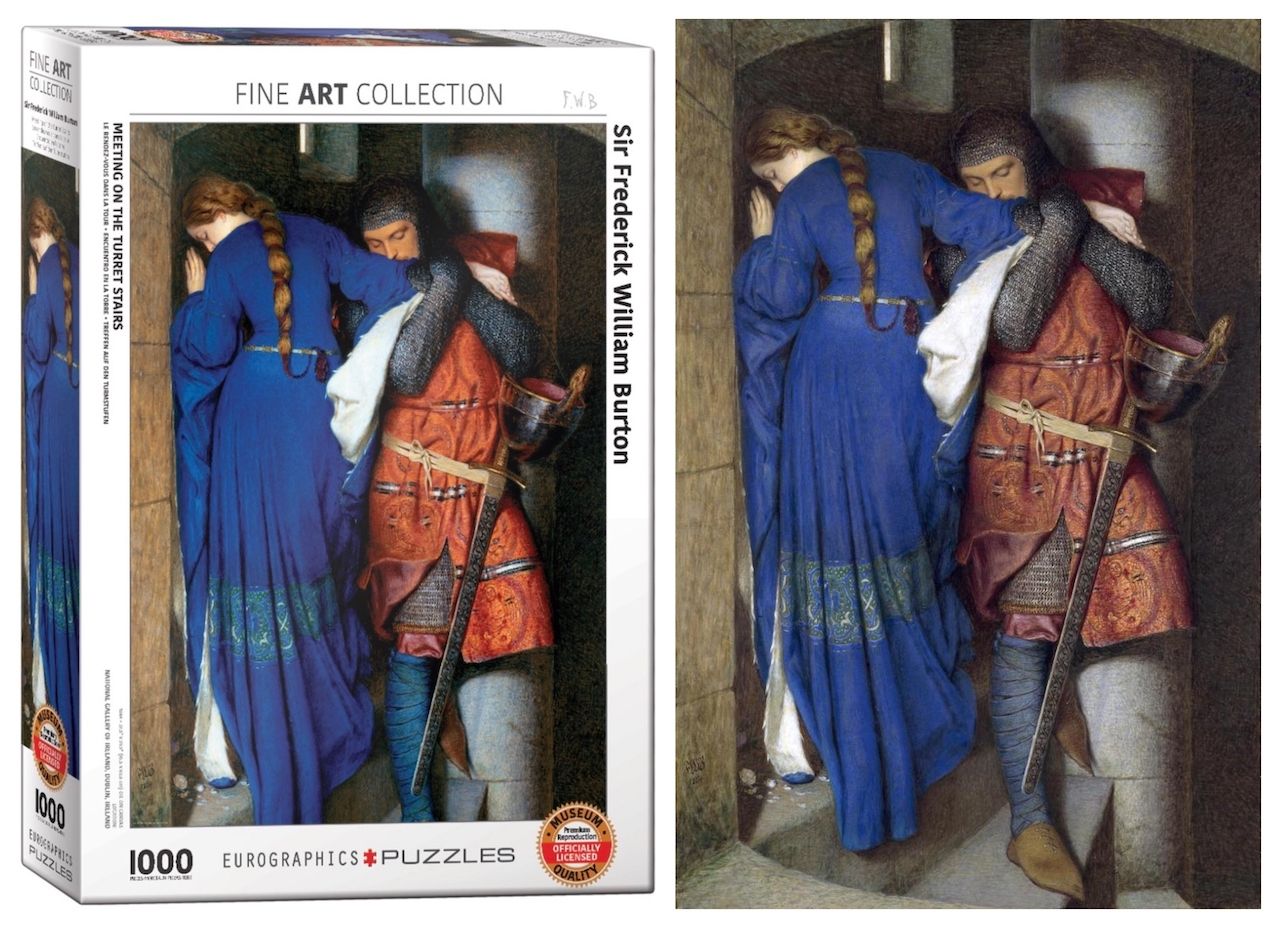 Completed in 1864 by Irish artist Frederic William Burton, “The Meeting on the Turret Stairs” is one of the most famous paintings from Ireland.

The artwork depicts the final secret meeting of a couple whose love is doomed. It’s inspired by a medieval Danish ballad about Hellelil, who is in love with her personal guard Hildebrand despite her family disapproving of the relationship. Eventually, Hildebrand is killed by Hellelil’s brothers. The romantically inclined will love working on the poignant and heart-breaking scene of this fine art jigsaw puzzle by Eurographics.

Where can I see Frederic William Burton’s “The Meeting on the Turret Stairs” in real life?

“The Meeting on the Turret Stairs” is on display in room 20 of the National Gallery of Ireland in Dublin, open Thursdays between 11:30 and 12:30 PM and Sundays between 2 and 3 PM. Admission is free. 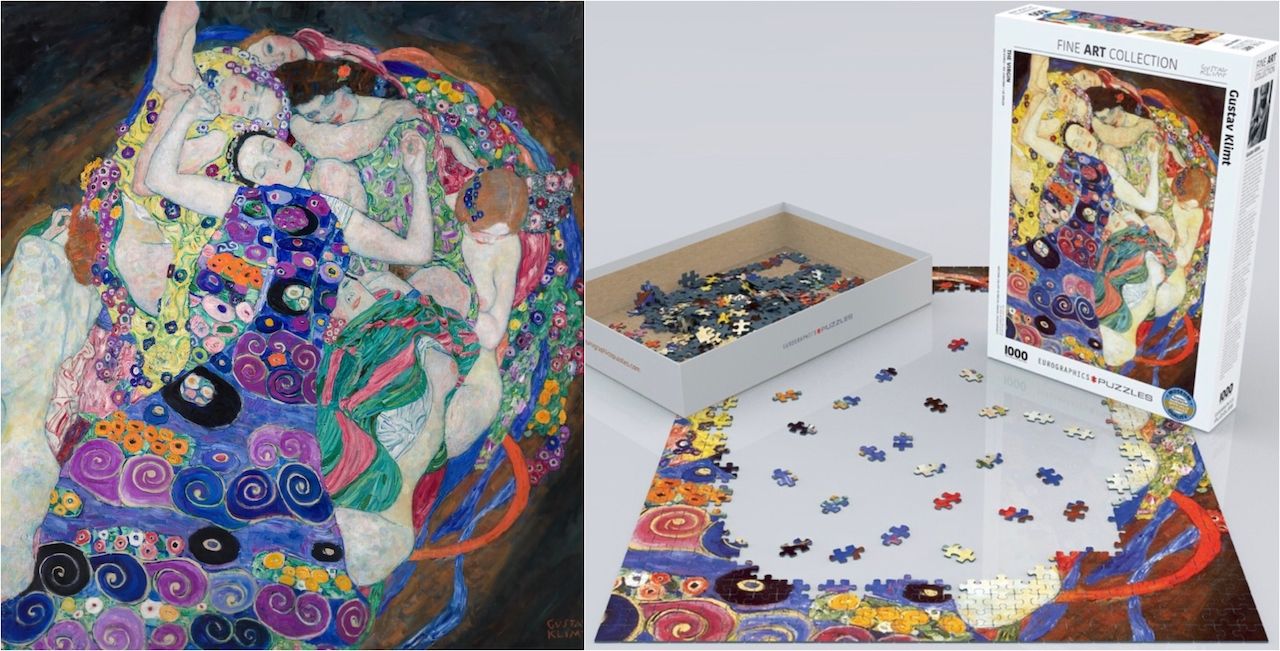 While Austrian painter Gustav Klimt is very well known throughout the world for his gold leaf and oil painting “The Kiss,” he has produced many other art works beyond his “Golden Period.” One of them, “The Virgin,” painted in 1913, depicts a young woman sleeping under a colorful and heavily patterned blanket. She seems to be having a sensual dream.

Where can I see Gustav Klimt’s “The Virgin” in real life?

“The Virgin” is on display in Prague’s National Gallery. 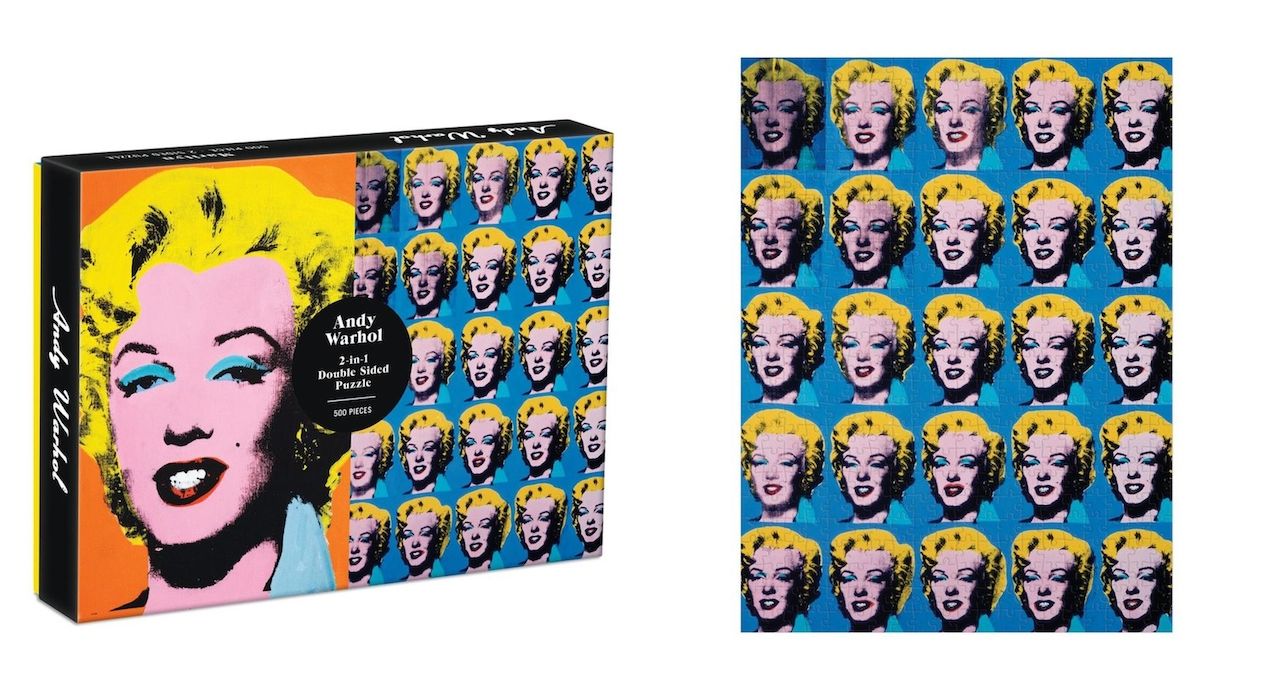 Painted after the death of Marilyn Monroe in 1962, Andy Warhol’s “Marilyn Diptych” is the artwork that epitomizes the Pop Art movement of the 1950s and 1960s. The original piece consists of two canvases, one colored and one in black and white to show the contrast between the actress as a public and private person. Warhol used a publicity photo for her 1953 film Niagara as the image for his iconic painting.

This 500-jigsaw puzzle by Galison only uses the colored part of the diptych, which doesn’t make it any easier to assemble — you might pull your hair out over the repeating pattern and colors. And, of course, because it’s a two-sided puzzle (one side has the repeating pattern, the other is a full-size portrait), you’ll want to pull your hair out in a matter of minutes after you start.

Where can I see Andy Warhol’s “Marilyn Diptych” in real life?

Andy Warhol’s “Marilyn Diptych” is on display at the Tate Modern in London, England. The Tate Modern is open Monday to Sunday 10 AM to 6 PM. Admission to access the permanent collection is free. 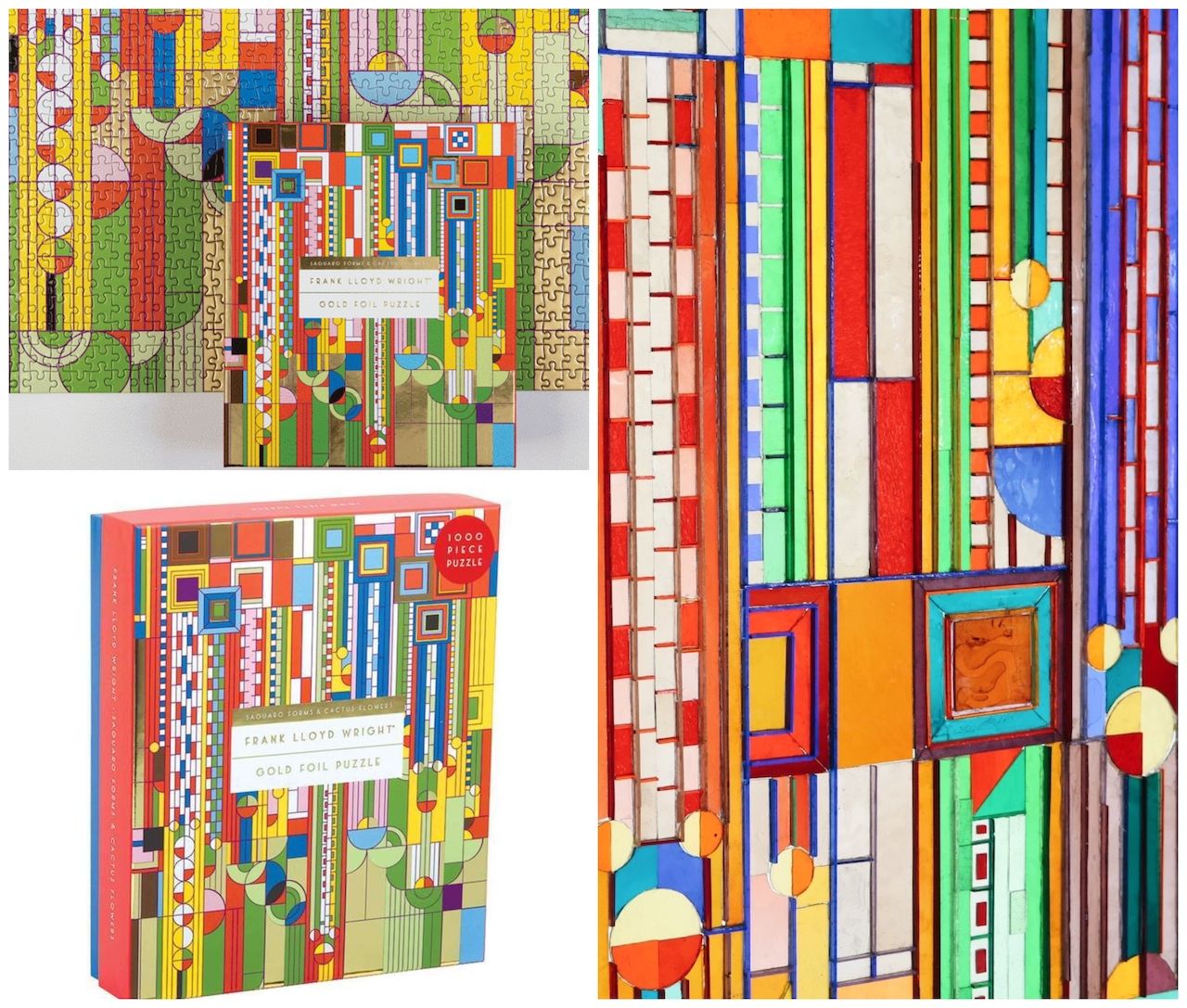 Frank Lloyd Wright, possibly America’s most famous architect, was also a designer of furniture, lead glass, and other decorative art. In 1927, influenced by the desert landscape and flora of Arizona, where he took residence later in life and set up an architecture school, he designed “Saguaro Forms and Cactus Flowers” for the cover of the Liberty magazine.

Frank Lloyd Wright’s colorful abstract Art Deco design has been the inspiration behind many magnets, ties, journals, mugs, and other merchandise. Our favorite, however, is the 1000-piece puzzle by Galison. It won’t be an easy one to put together, but perseverance and patience will reward you with a stunning art piece.

Where can I see Frank Lloyd Wright’s “Saguaro Forms and Cactus Flowers” in real life?

Kenojuak Ashevak, from Ikirasaq, on the southern coast of Baffin Island, is one of the most renowned Canadian Inuit artists in the world. Her artwork “Six-Part Harmony,” created in 2011 by stonecut and stencil, depicts six animals in a state of interconnection.

This 500-piece puzzle by Pomegranate is one that can be assembled by the entire family, and it’s a beautiful introduction to the fascinating world of Inuit art. And if you happen to fall in love with Inuit art, Pomegranate also carries a puzzle of the artwork “Colourful Wild Owl” by Ningiukulu Teevee.

News15 Cities That Have Both an Immersive Van Gogh Exhibit and the Artist’s Real Paintings
Tagged
Art + Architecture Culture Museums
What did you think of this story?
Meh
Good
Awesome