If you know only one thing about Argentinian cuisine, it’s that the country loves its meat and its asado, or barbecue. Pioneered by gauchos (cowboys) in the early 1800s and embraced by the country as a whole, it’d be a shame to visit Argentina without getting a taste of everything grilled. The only question is where and how to start.

Asados are everywhere in Argentina, from apartments in big cities, to large ranch gatherings, to the humble asados on the side of the road. More than just a barbecue, an asado is an event with food, drinks, and friends that can last all day and long into the night. You generally have to know someone to get invited to an asado (though some companies hold asados on ranches for tourists), but parrillas, or steakhouses, are the next best bet to eating the meats that make asados so appealing.

Whether you’re lucky enough to be invited to an asado by a local or are sticking to a parrilla in the city, the meal isn’t complete without a wine straight from Argentina wine country, like a Mendoza malbec, or Fernet and Coke. But the first thing you need to know is what meats to order.

Asado meats to order in Argentina 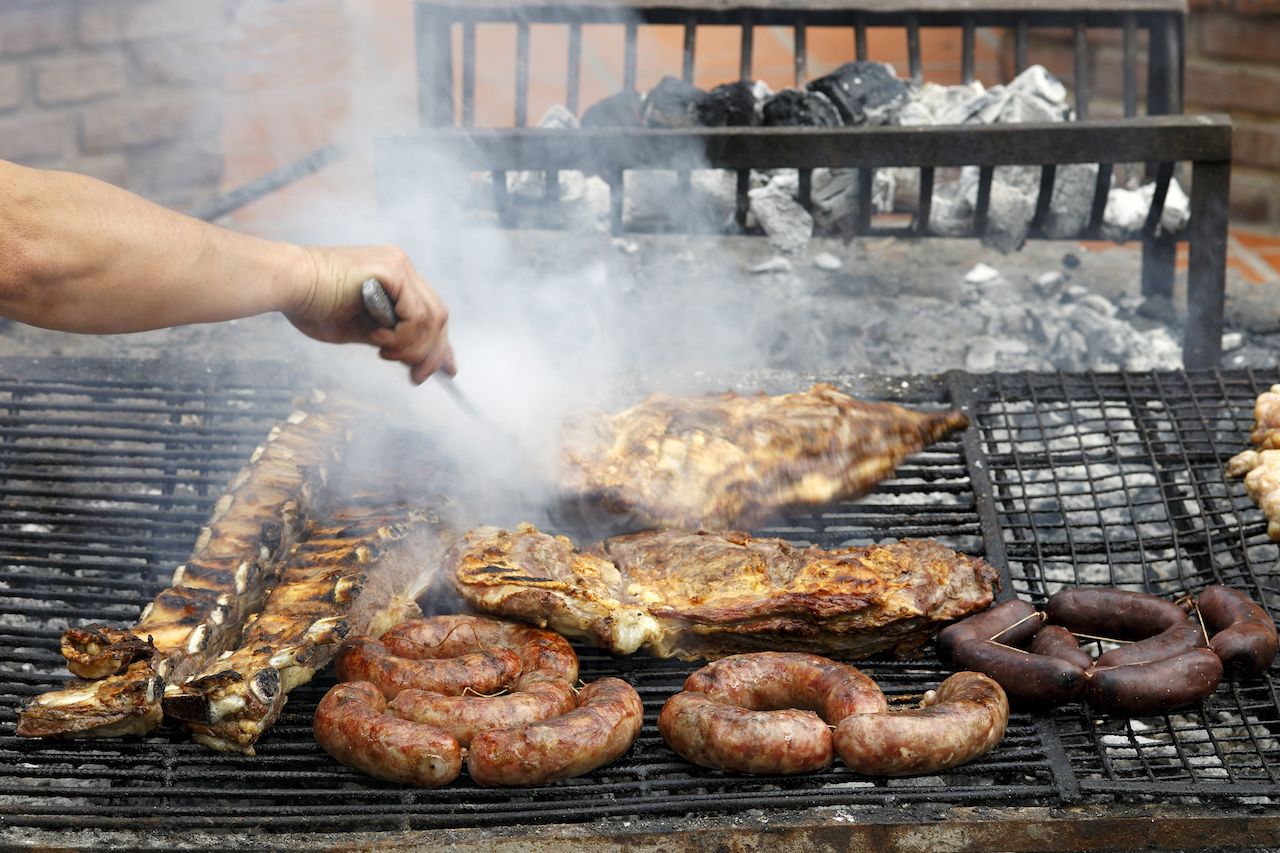 The cuts of meat available depend on where you’re at, but there are few more common cuts you’re likely to encounter.

A cut similar to beef short ribs and grilled only with salt. This large cut of fatty meat is usually one of the first to come off the grill in an asado.

A boneless cut from around the belly of the cow. It’s less fatty than the tira de asado but still juicy and goes great on a sandwich. A whole vacio can weigh around five pounds and is perfect for the large group setting of an asado.

A flank steak that’s eaten in several ways. One is to stuff it with cheese, eggs, carrots, and other vegetables. There’s nothing wrong with eating it as a simple steak with chimichurri, either. One off-beat style is matambre a la pizza, which is exactly what it sounds like: a big piece of meat covered with tomato sauce and mozzarella.

The same as a skirt steak in the US, this is a cheaper cut that’s still juicy and tender when cooked right.

The rib cap that’s not as tender as the other cuts but is a classic nonetheless. This cheaper boneless cut is less fatty and a bit drier than the others. Typically served pink in the middle.

A fatty and juicy cut of pork for when you’re not in the mood for beef. It also makes for a great sandwich.

Side meats to go along with your asado meats 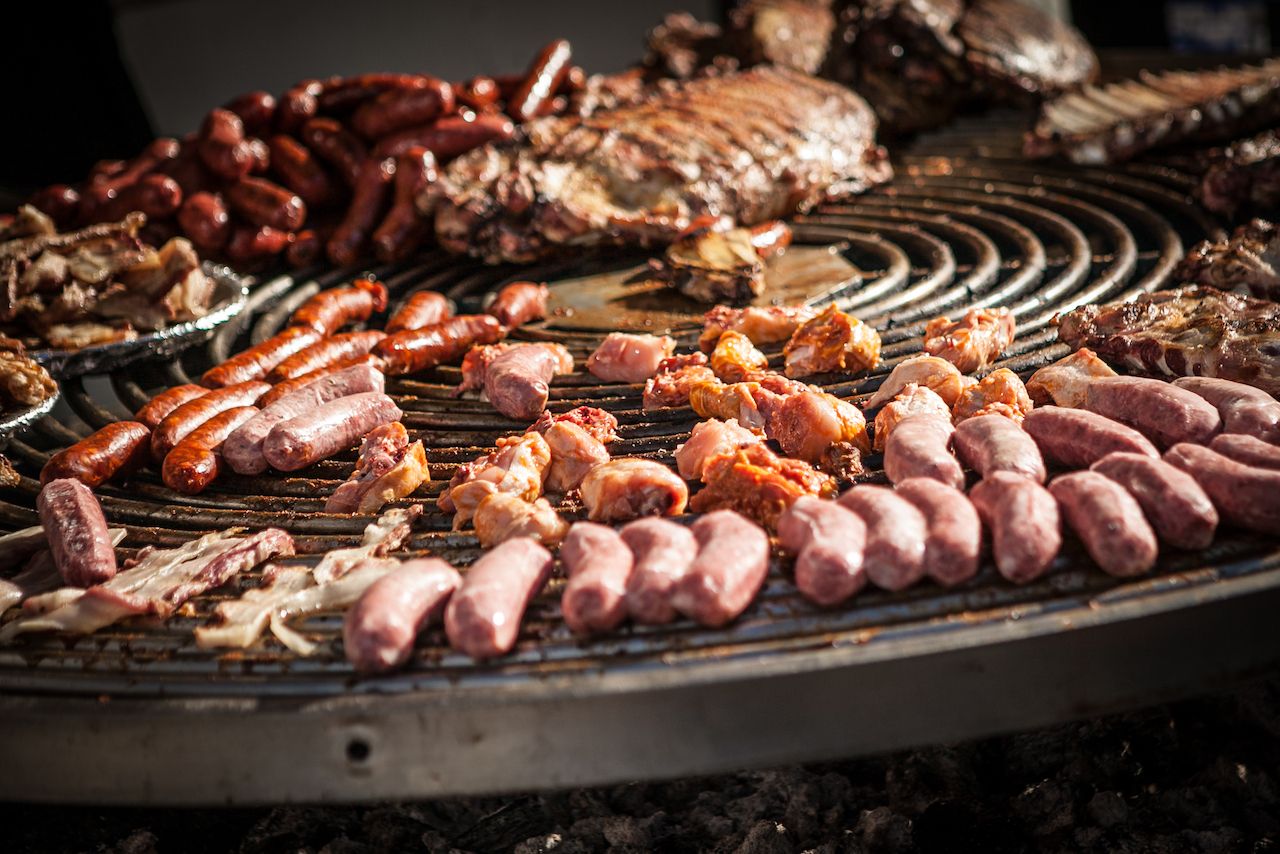 A good variety of sausages and achuras, or offals, are needed to have a true and full asado. The tasty combo of meat and achuras is completed by the unmissable and unforgettable provoleta, which is a tasty grilled provolone cheese that melts in your mouth. All of these come with french fries on the side and the mandatory chimichurri and salsa criolla (onion relish). These are some of the most popular achuras to round out your barbecue.

This sausage can be eaten by itself, but it’s almost always eaten in a sandwich called choripan, which comes from the words chorizo and pan (bread). Don’t be stingy with the chimichurri as it’s a perfect match for the sausage.

Blood sausage that’s similar to what you’ll find in other blood-sausage-consuming countries. The blood is mixed with enough filler to become solid when cooked, and morcilla is commonly eaten alongside chorizo or in a sandwich called a morcipan.

If you are willing to spend some money on achuras, be sure to spend it on mollejas. The name translates to sweetbreads, but it’s made with a cow’s thymus gland. Mollejas are beloved by almost everyone and are a little slice of heaven turned into food when served with some lemon and salt.

The small intestines of a cow, chinchulín can be a risky bet. When correctly prepared, it’s crunchy and delicious, but it can be rubbery and taste a bit strong if not done right. So, if you’re feeling adventurous, try this achuras with extra lemon and salt.

The best parrillas in Buenos Aires 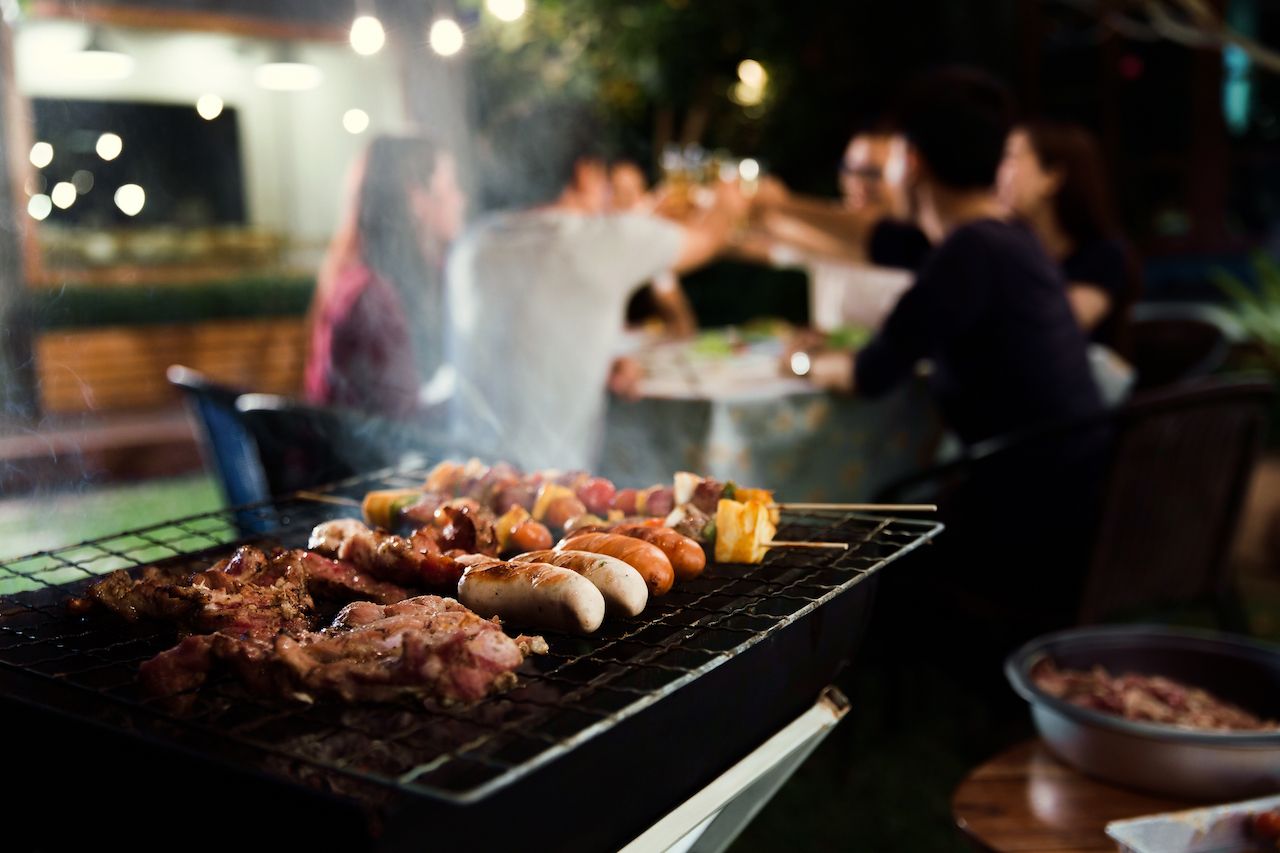 So what happens if you’re not fortunate enough to be invited to a local asado? Don’t worry, there are parrillas on every corner in Buenos Aires.

If you want to splurge, go to the fanciest parrillas in the Palermo neighborhood, such as La Cabrera or Don Julio. If you don’t want to lose an eye to eat a great piece of meat, you can also go to the parrillas de barrio. These are the little parrillas that you can find at any neighborhood. Some choice options include Los Chanchitos in Villa Crespo, El Tano in Avellaneda, El Boliche de Darío in Caballito, and El Desnivel in San Telmo.

If you’re more into street food and on a tight budget, then the Carritos de la Costanera are what to look for. These are a sort of food cart parked on the riverside, and on weekends, the carts prepare meat sandwiches with toppings like tomato, lettuce, fried egg, ham, and cheese.

With a base knowledge of what to meats to order in Argentina, all that’s left is to follow your nose the next time the smell of asado comes your way.

What is a parrillada?

Parrillada is a barbecue dish usually prepared for large family gatherings. Ingredients of parrillada beef and chorizo, often mixed with vegetables like bell pepper, nopal (cactus), and pineapple. The word comes from parilla, the word for grill. The meat is cooked in a comal, a cast iron pan, and served with tortillas.