Every year the Insight Investment Astronomy Photographer of the Year contest organized by the Royal Museums Greenwich gives people a glimpse into the wonders of the universe. This year, thousands of astrophotographers from around the world submitted their best work, and the shortlist of finalists in each category has just been revealed. According to competition judge and Royal Observatory Greenwich Astronomer Dr. Emily Drabek-Maunder, “The goal of the Insight Investment Astronomy Photographer of the Year competition is to use these powerful photographs of space to engage the public with the big questions science is trying to answer, from the inner workings of a galaxy to how our Solar System came to be.”

These are some of the most stunning entries from each category in this year’s contest. 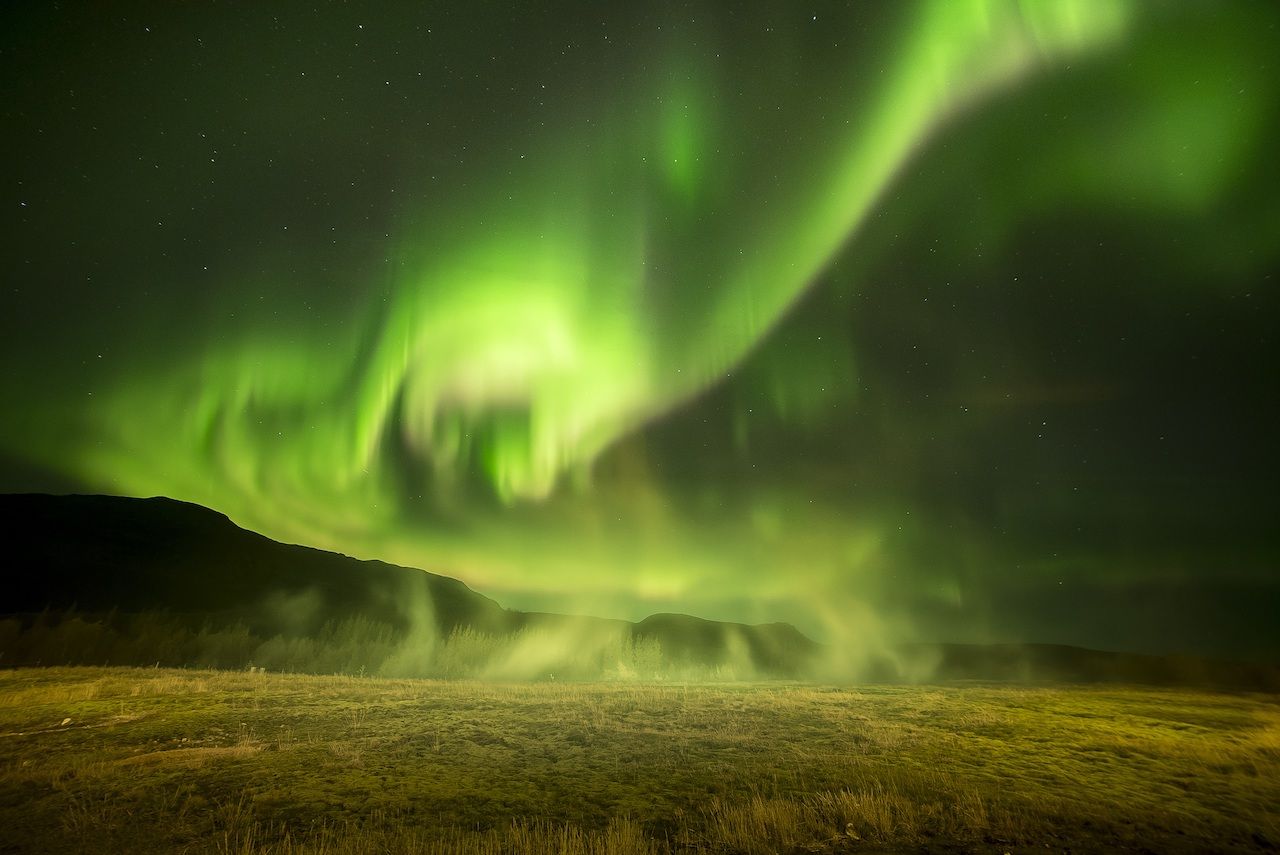 Close to the spring and autumn equinoxes, the earth’s magnetic field aligns with the incoming solar wind to create a better chance for aurora activity. Phil Halper had been waiting for signs of a solar storm near the equinox date, hoping that the Russell-McPherron effect would kick in. During the last weekend in September, it seemed there would be favorable terrestrial and space weather conditions, so Halper traveled with a friend to Iceland. They weren’t disappointed. The northern lights danced all weekend, with clear skies every night. This shot shows the famous Geysir of Iceland preparing to blow with the aurora behind it. 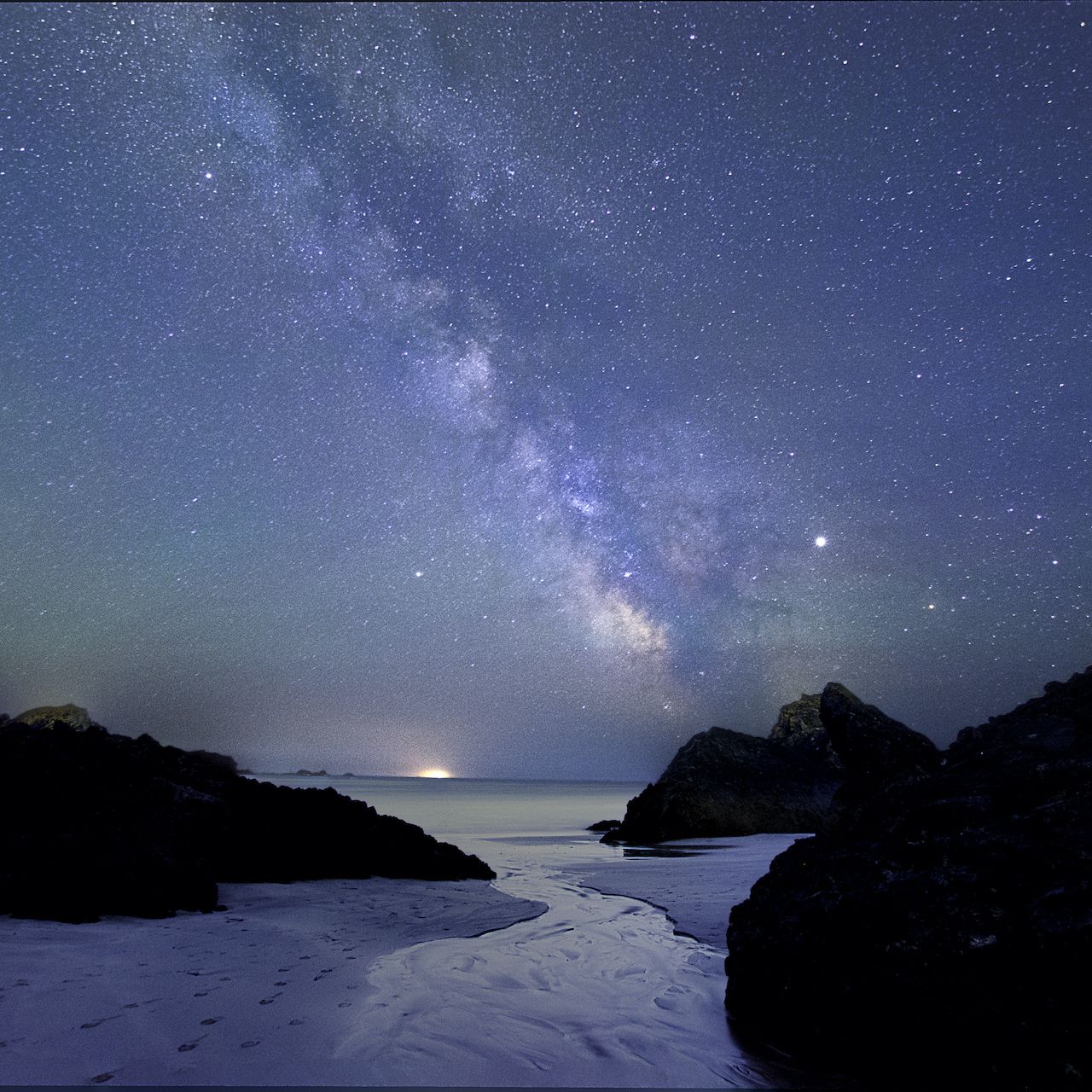 “Kynance Cove Under the Milky Way” by Louise Jones (UK)

This image is only Louise Jones’ second attempt at shooting the Milky Way. It shows our galaxy over Kynance Cove in Cornwall, a beautiful spot with dark skies. It was taken on a cold but fabulous night under the stars. Because it was July, the sky was blue, with full darkness only for about an hour. The foreground was taken at dusk, and the sky is a stack of four images taken 25 seconds later when the Milky Way appeared. 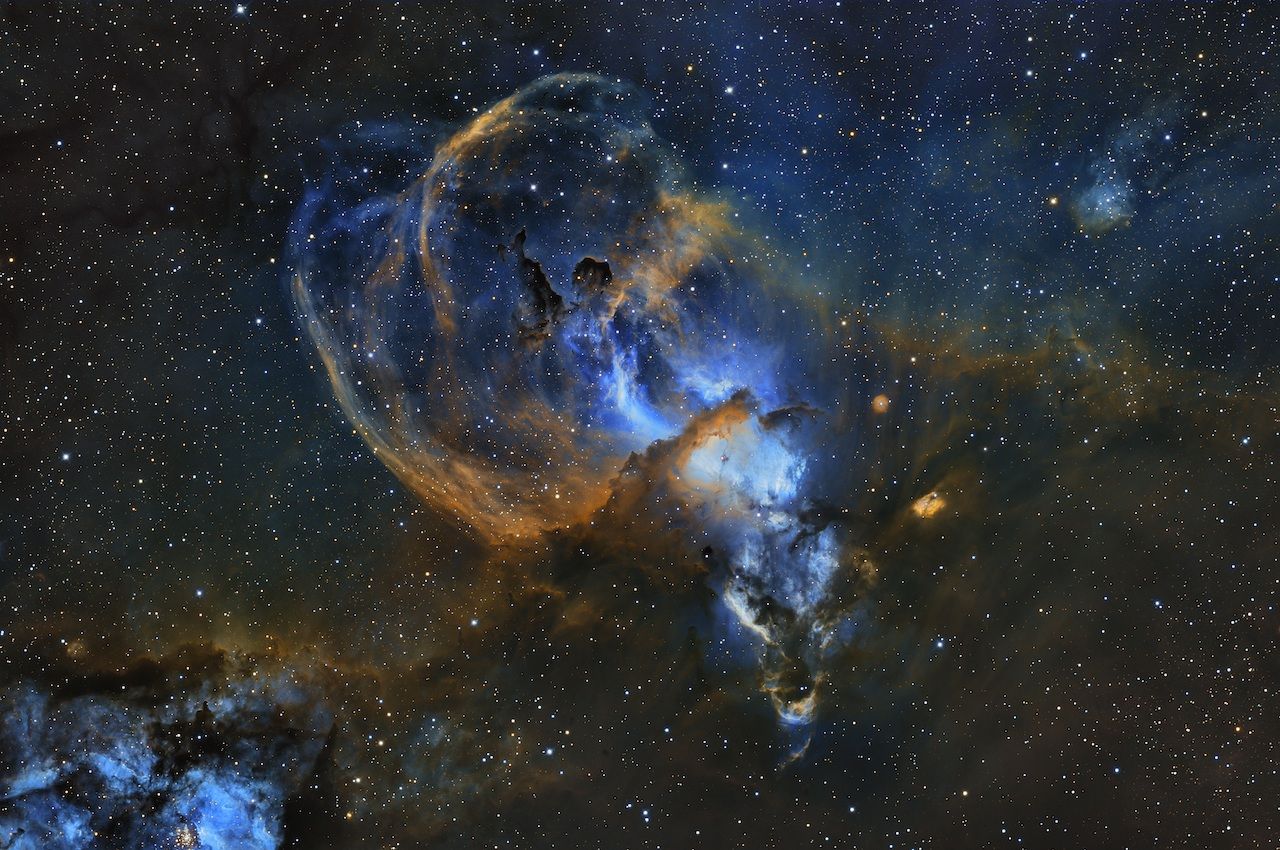 Photographed using narrowband filters to accentuate the energy levels occurring in each emission line — sulphur mapped to red, hydrogen to green, and oxygen to blue. An additional four hours per RGB channel were acquired and substituted into the image, particularly for the stars. While aptly titled the Statue of Liberty Nebula (NGC 3576), the irony is that this is a southern hemisphere object. At the lower left of the image is NGC 3603, containing the Starburst Cluster. NGC 3576 is located in the Carina arm of the Milky Way at approximately 20,000 light years away. 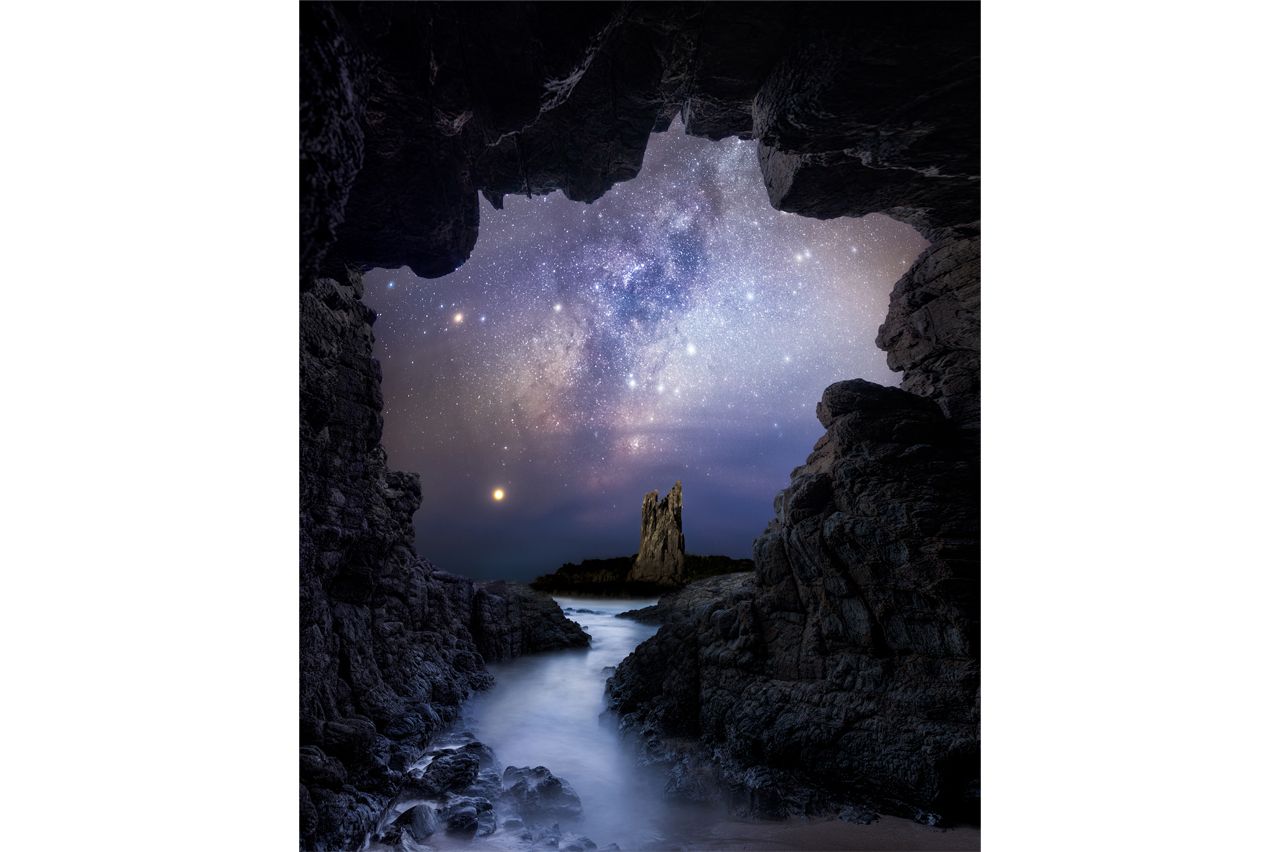 On Marcin Zajac’s trip to Australia, he traveled to the coastal town of Kiama, where he captured his first Milky Way image of the year. Once the sun set, Zajac made his way into the cave and waited for a few hours for the core of the Milky Way to appear. Being unfamiliar with the southern sky, the photographer was surprised to see Jupiter appear soon after.

After a long hike and a little bit of climbing to the top of the mountain, Nicolai Brügger was able to see the Milky Way. He only had five minutes to take the panorama shot before the clouds moved. Brügger and his friend are pictured standing on the edge, looking out at the sky and over the city of Füssen in Germany. 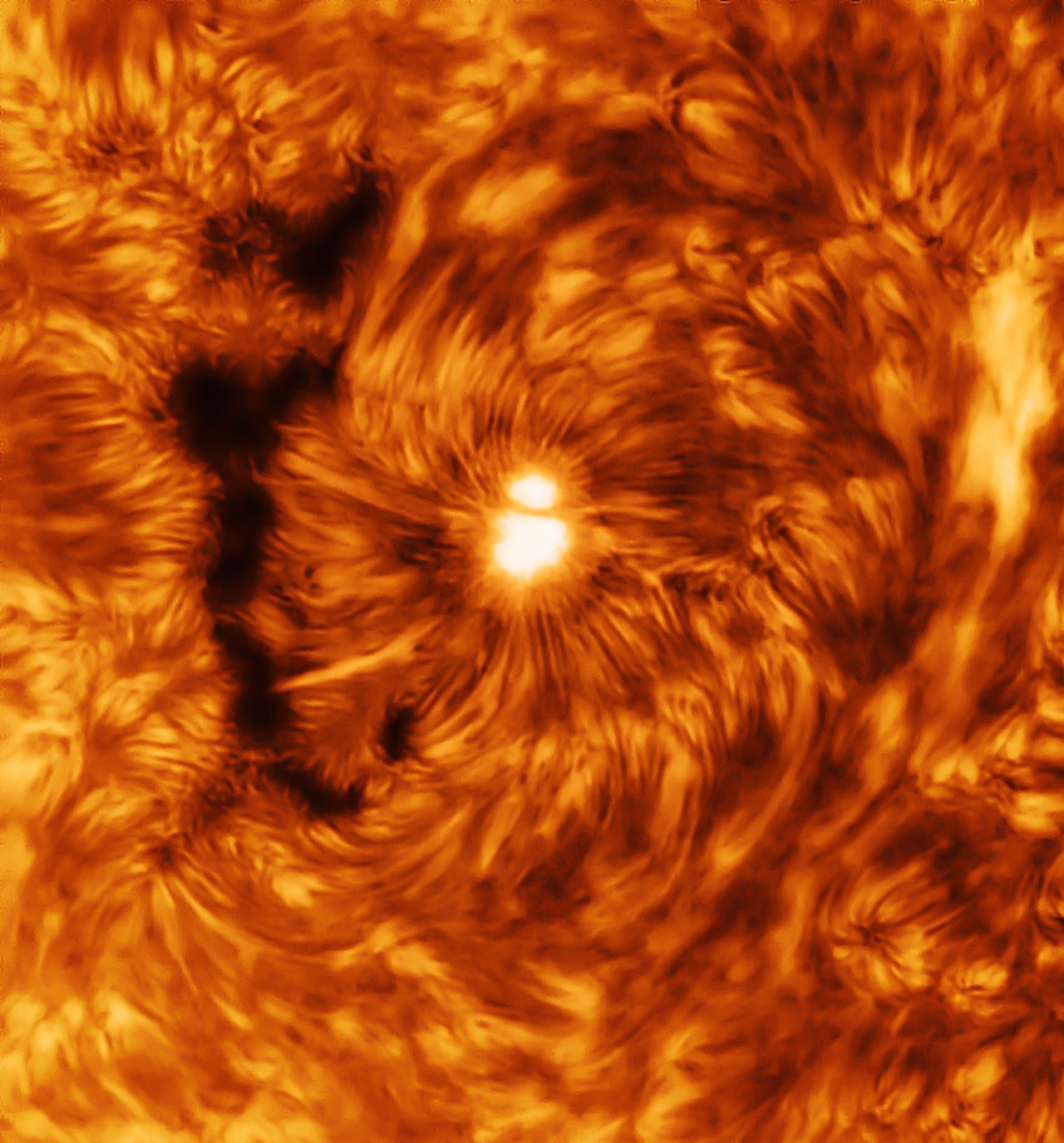 This image shows an active region (AR2741) that was visible on the solar disc in 2019. The visible sunspot in the center of the image is dissected by a light bridge. To the left of the sunspot sits a large area of plage, which are commonly found in the chromosphere near sunspots. Alastair Woodward inverted the image and false colored it to enhance the active region and light bridge. 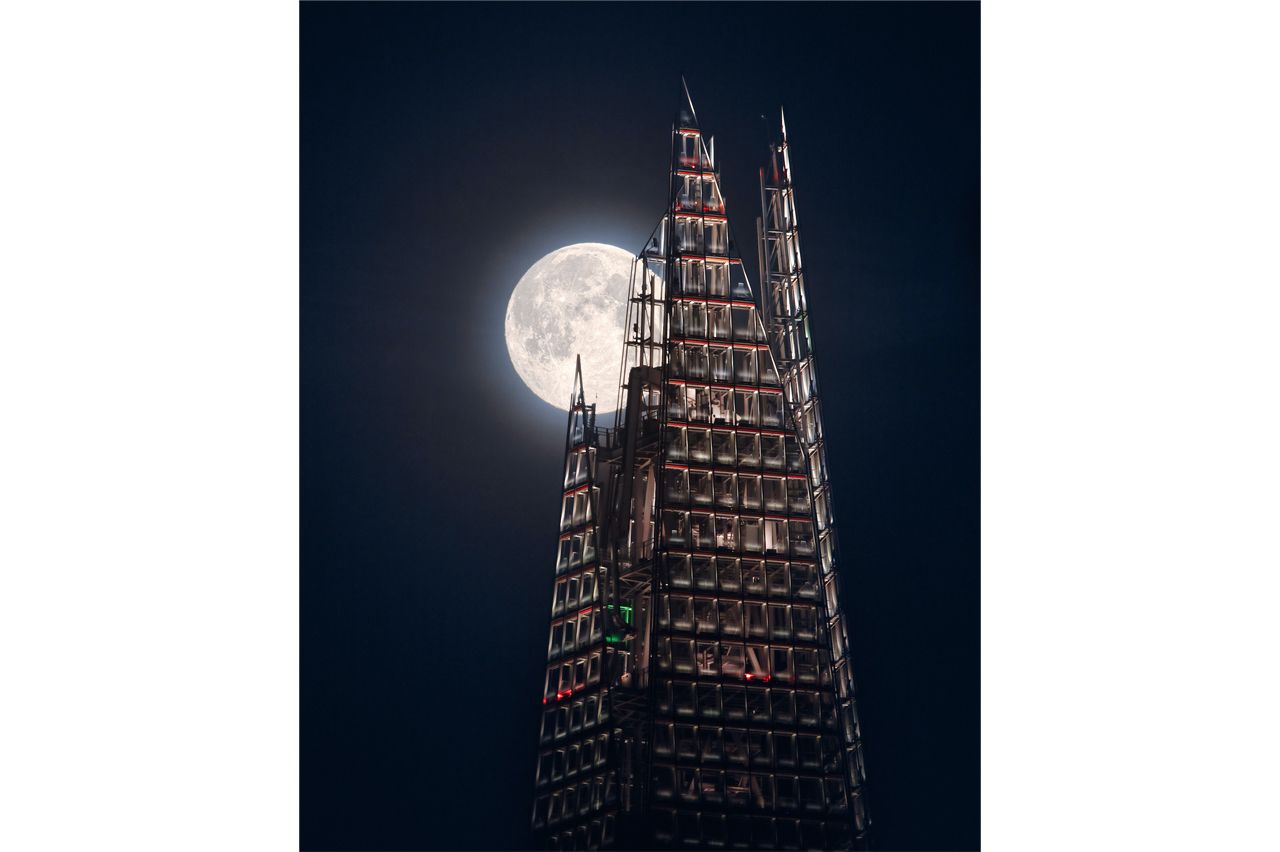 “The Moon and the Shard” by Mathew Browne (UK)

After three failed attempts, Mathew Browne finally got to shoot an image of London’s iconic Shard skyscraper with a full moon behind it. The moon races through the frame, meaning Browne only had a few minutes to capture the shot. 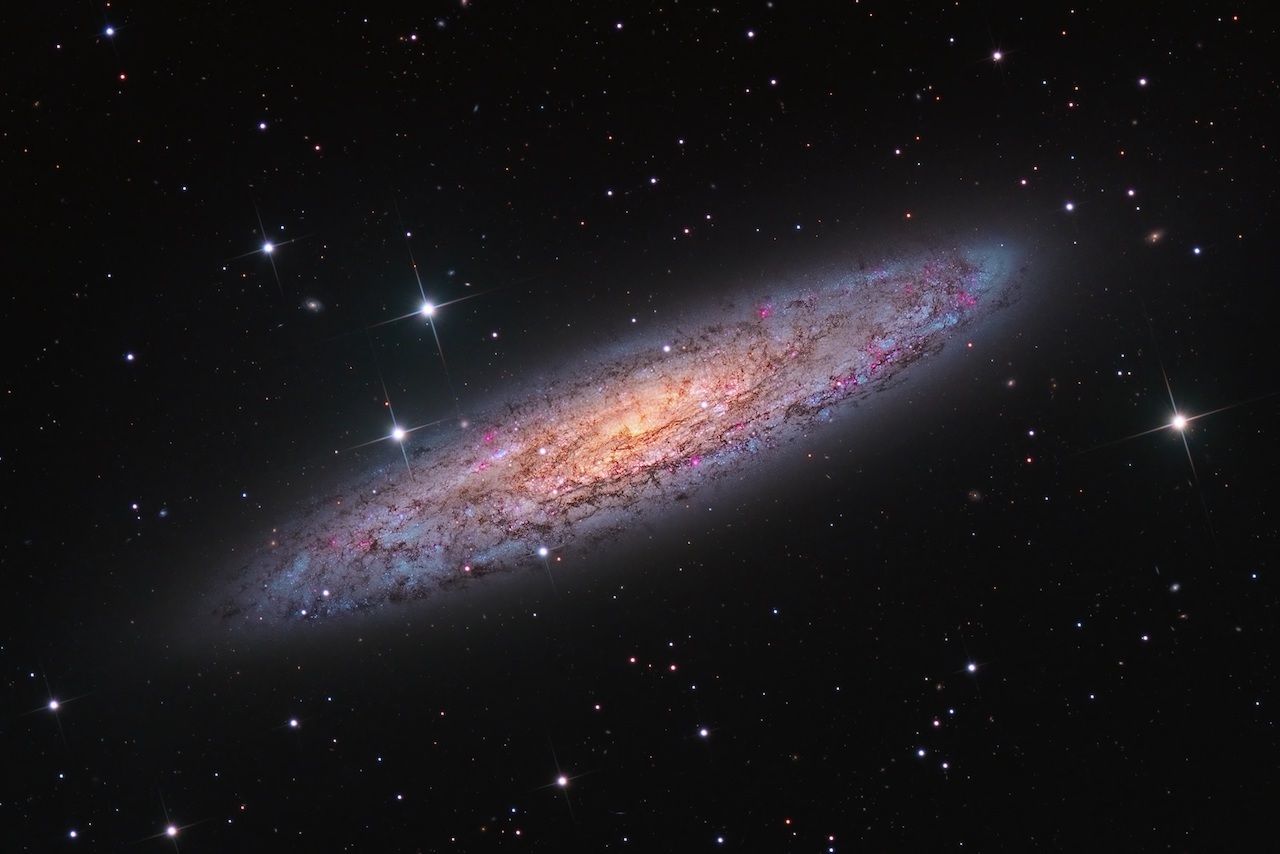 This image depicts an object that many will recognize in the southern hemisphere skies — NGC 253, the Sculptor Galaxy. It’s an intermediate galaxy located within the constellation Sculptor and is one of the brightest spiral galaxies visible to us. It’s also one of the dustiest and currently undergoing a period of intense star formation. Terry Robison’s goals were to present this large and bright galaxy in a way that retains its subtle coloring and intricate textures throughout its disk. 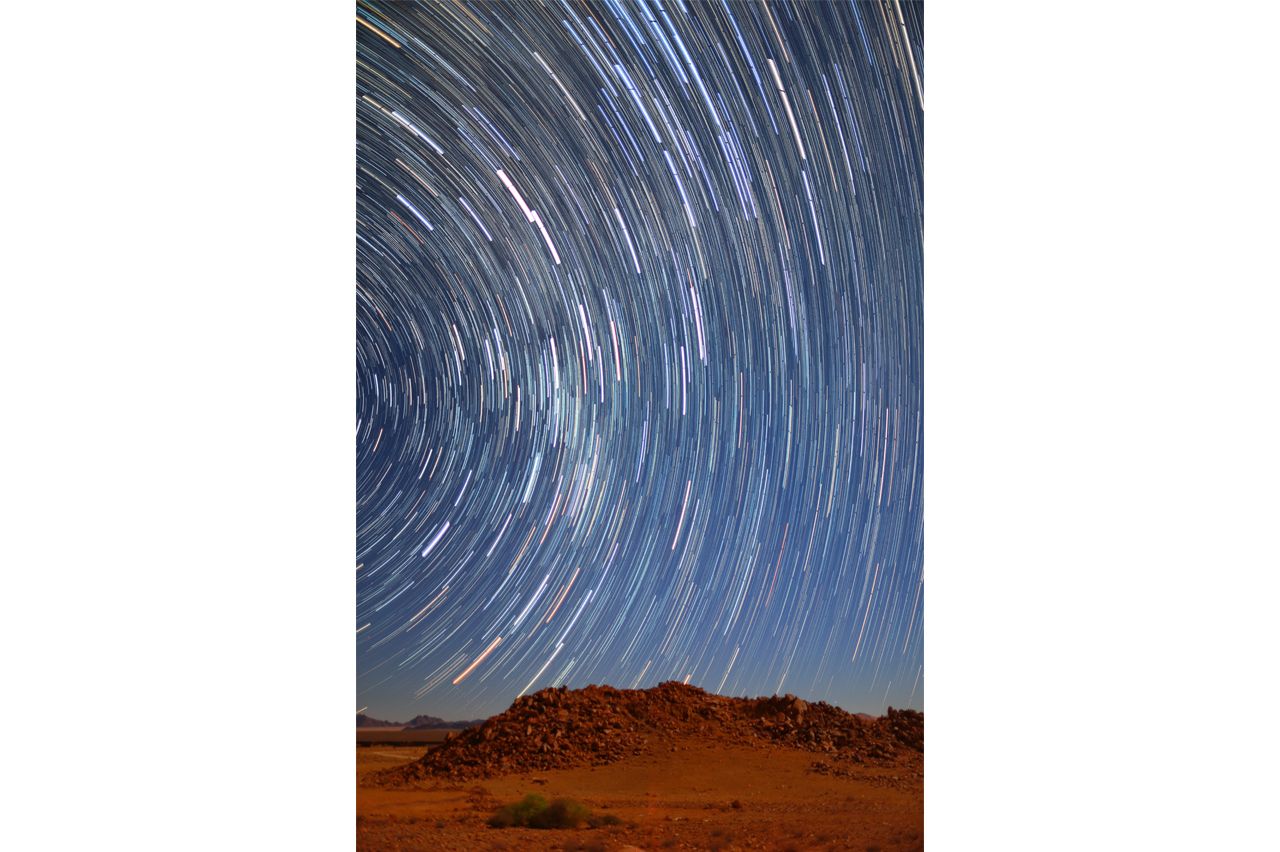 The image was taken while Qiqige (Nina) Zhao was staying at the Sossus Dune Lodge in Namibia’s Namib-Naukluft Park. Located in a tranquil and remote area, the lodge has the reputation of being the perfect place for stargazers. Zhao was intrigued by the warning sign in the lodge that warned guests to keep the doors shut in case baboons snuck in, so he spent the night expecting a baboon to spring into the shot. 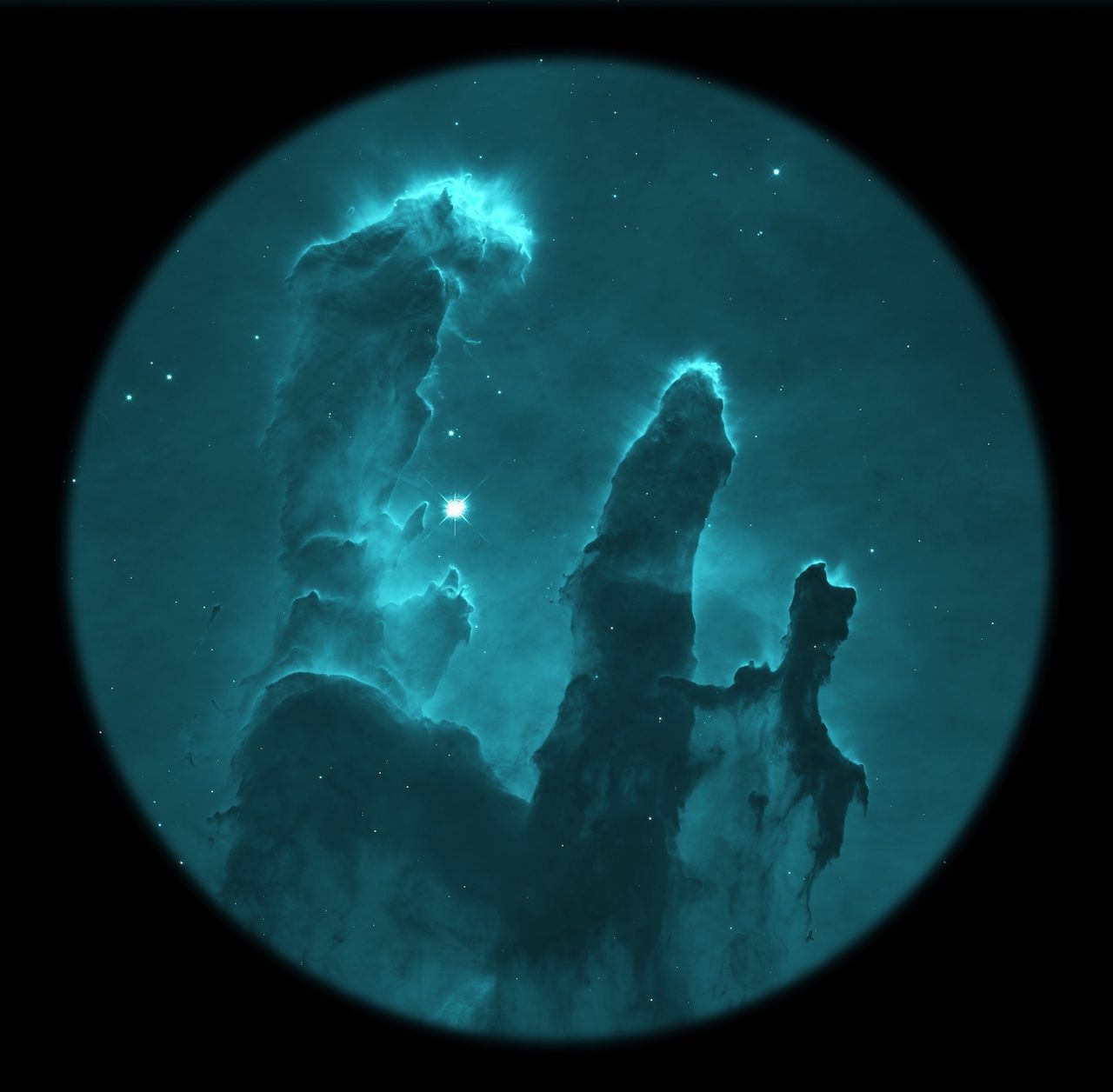 The Annie Maunder Prize for Image Innovation is awarded to photos created using publicly available images, and which have been processed and edited to create something unique. This entry tries to catch the feel of stargazing through a basic optical instrument — a kind of Galileo’s telescope. Special processing of the image includes converting to Lab, channel mixing, increasing contrast, and applying filters, with the aim of illustrating the images with limited color range.