Anyone who has ever tried planning a bachelor or bachelorette party knows it’s about as straightforward as getting a bill through Congress.

Endless discussions of Miami vs. Vegas vs. Austin vs. a yoga retreat to Mexico. Organizing hotels. Figuring out activities. Let’s not even get started on eating dinner. It’s basically an exercise in indecision that leaves whoever tried to organize it wanting to back out of the wedding entirely.

But a new app is trying to take at least a little of the headache out of the planning. Bach — pronounced “batch” and not like the German composer — debuted in September with the goal of streamlining the planning process as much as possible, and bringing some semblance of organization to the world of bachelor party chaos.

“We ran into a situation where these parties that were supposed to be fun turned into a giant headache,” says Greg Ramey, Bach’s co-founder and chief revenue officer. “People were experiencing the same problems and pitfalls, and when we realized people had the same pain points, we knew we could make something that was inherently viral and fun to use.”

Like with any organizing app, Bach begins with all members of the party or trip downloading the app.

The app will ask you to choose whether you’re planning a bachelor party, a bachelorette party, or a party “for everyone,” which we assume means one of those trips where both the bride and groom are present and nobody has any “we will never discuss this again” fun.

Bach then prompts you to select a location. Obviously, the app works for any city, but Bach also has half a dozen cities pre-programmed with activities, adventures, and dining experiences (more on those later). Right now those cities include stag party standards like Miami, Austin, and Las Vegas, but Ramey says they’ll be expanding that exponentially in the near future.

Pick the dates, tell Bach if you’re just planning the party or if you’re the bachelor(ette), invite people from your contact list, and it’s off to the races.

Inside the app you’ll find a handy, pre-party checklist in chronological order, with everything like setting the party dates, booking flights, all the way down to party games.

Past that, you’ll find a pre-planned list of activities in each city; stuff like a TAO bachelorette experience in Vegas or a beach party package in Miami. You’re able to book the excursions right on the app, and, more importantly, split the expenses in any way you see fit.

These activities, Ramey says, is how Bach monetizes this whole thing, buying them at wholesale and selling just below or at retail. Bach doesn’t have ads, and it’s free to use. 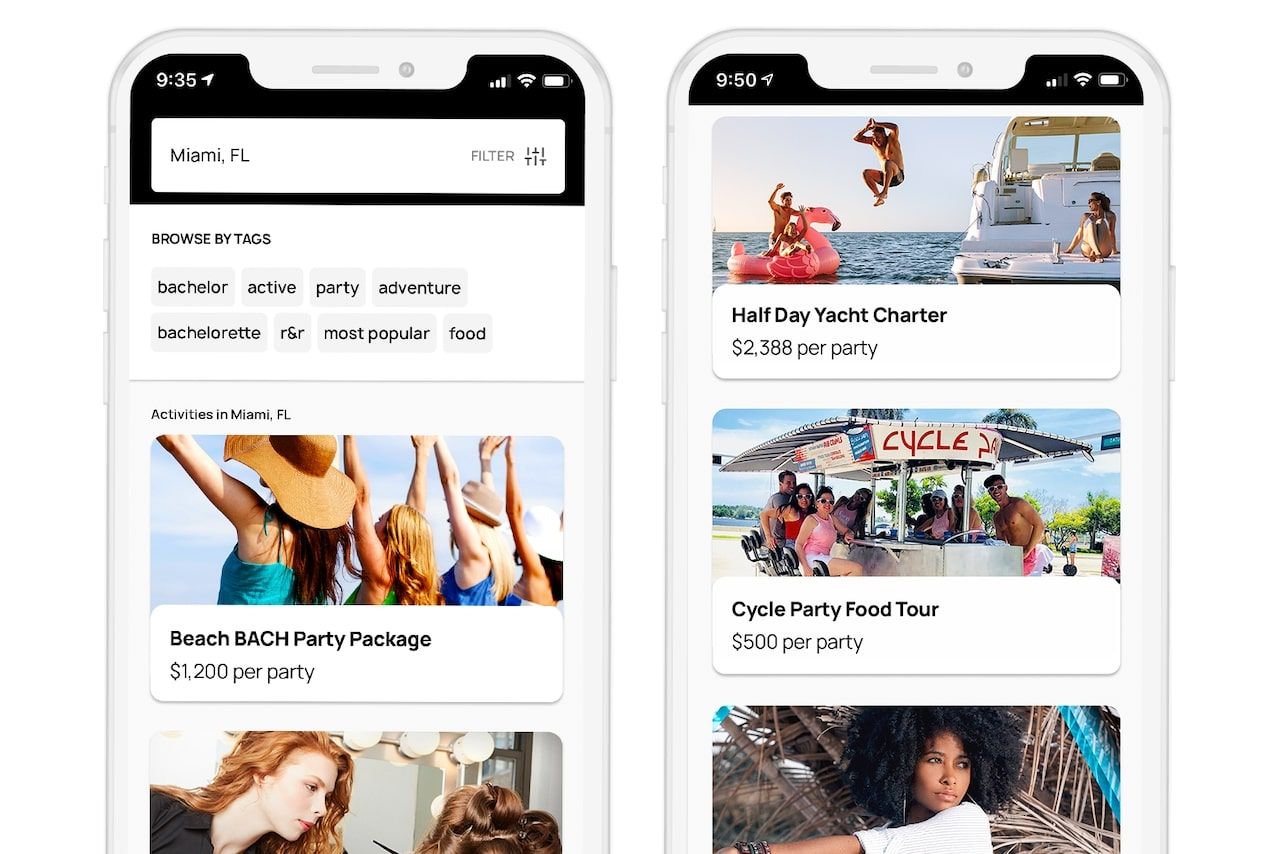 But perhaps Bach’s most useful feature is its expense tracker. Beyond just divvying up who paid for a pre-planned activity, it allows you to enter any expense you like, from hotels to dinners to penis-shaped paperweights, and split it among the crew. No more keeping track of who paid for what and who owes whom how much. Everyone enters their own expenses, and the app figures out all of that for you.

“It’s really attractive to a best man or maid of honor who are traditionally the ones leading this charge,” says Ramey. “Usually it’s one person who takes on the financial burden. Nobody wants to play cat and mouse, and especially when it’s a group where you [may not] know anybody.”

Though you cannot pay each other through the app yet, Ramey says that feature is also forthcoming. There’s also a chat feature, which, unlike traditional group chats, can end when the party is over and not drag on for months afterward running down your phone battery.

Ultimately, he says Bach will also allow you to book hotels, rental cars, and even floaty toys for a South Beach pool party. However, those features aren’t available yet.

“Everyone has a horror story and is looking for a solution,” he says, “and we’ve had incredibly positive feedback and response. The wedding business community is overwhelmingly positive as a whole, and this has been a space that no one has touched yet.”

Of course, Bach’s use isn’t limited to bachelor and bachelorette parties. Theoretically any guys or girls weekend, family vacation, away game, or group trip can take advantage of the features — especially once hotel booking and payment get rolling.

So, while nobody will ever be able to take ALL the hassle out of planning a bachelor or bachelorette party, at least Bach is trying to make it a little easier on everyone.

Female TravelHow To Plan a Bachelorette Party Overseas
Tagged
Technology + Gear
What did you think of this story?
Meh
Good
Awesome