I was born in Baltimore. My mother and father were too. In fact, my family is three generations strong here. We’re from all over — East Baltimore, West, and the county, too. I’m a product of it all because my family has lived in every part of this city and its outskirts. I’ve known about the city’s ills since my childhood and even witnessed some of them growing up, but it’s always been the most beautiful place I’ve ever seen. Not in an Instagrammable kind of way, but in its grit and the spirit of the people.

My grandma was born in 1932 in Havre De Grace, Maryland, and spent the rest of her life living in East Baltimore, or as we call it, “down the hill.” Her parents moved to the East Coast from North Carolina, where, before she was born, her dad worked as a chauffeur and her mom as a housewife. The generation prior were alive in the 1800s and early 1900s, meaning that my great-great-grandparents were likely slaves in the Carolinas.

My grandma told me about how she picked cotton as a child with her siblings to earn extra money for the family each week. When I asked about the ’60s and if she had marched with civil rights leaders, she reminded me that she was a single mother with five children by then. She didn’t have much time to march, but recalled the resilient climate in which those around her fought. She told me about the day people marched on Washington and how she had friends who headed to the capital as she watched from home in Baltimore.

And her daughter, my mother, often reminded me what it was like growing up in a racist and segregated Baltimore in the 1960s and ’70s. She recalled the times she had to run miles home after being chased by her racist classmates.

My memories of Baltimore are a lot different than those of my matriarchs. The Baltimore I know has always been a place brimming with Black joy. It’s a place where summers as a kid meant flocking to the city pools, ordering a snowball with marshmallows, and sitting out in someone’s yard with a box of crabs. My sense of home is in those thick Baltimore accents that are northern but with a little southern drawl, too, hearing, “Bal-da-more,” “tew,” or “ice-cold waters, ice-cold waters for a dollar!” When I’ve stayed away too long, all I need to do to reassure me that I’m home is get on the highway by North Avenue and catch a brother in a suit selling the best bean pies I’ve ever eaten. 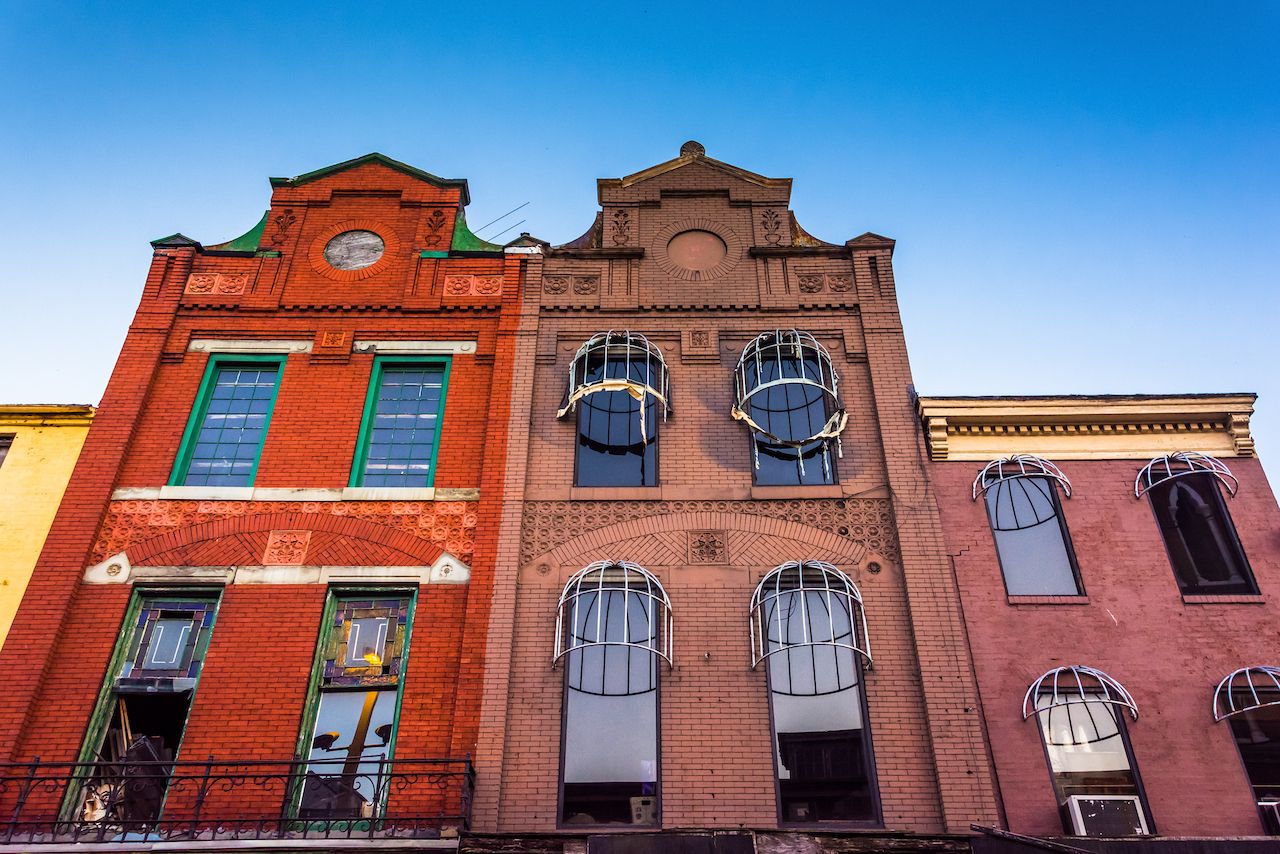 As children, my sister and I were up at 6:00 AM — sometimes earlier — on many Saturdays to get our hair done at Flair Hair salon in East Baltimore’s Old Town Mall. Flair’s was the center of the universe at that point in my life. We’d stick around to watch our hairdresser (who had also done my mom’s, aunties’, and grandma’s hair) slick perms and fancy up-dos into everyone’s hair. The stories that the women shared about work and life always taught me something, or at least made me laugh. Even if I shouldn’t have been listening to some of their conversations, there was always a lesson in the end.

The entire salon watched movies and the news together. We sang, laughed, and even cried. In the best moments, it didn’t seem to matter that the neighborhood was rife with abandoned shops, boarded up homes, and poverty just a block away where my mother grew up. Even in the midst of so many people’s pain, we always had community. 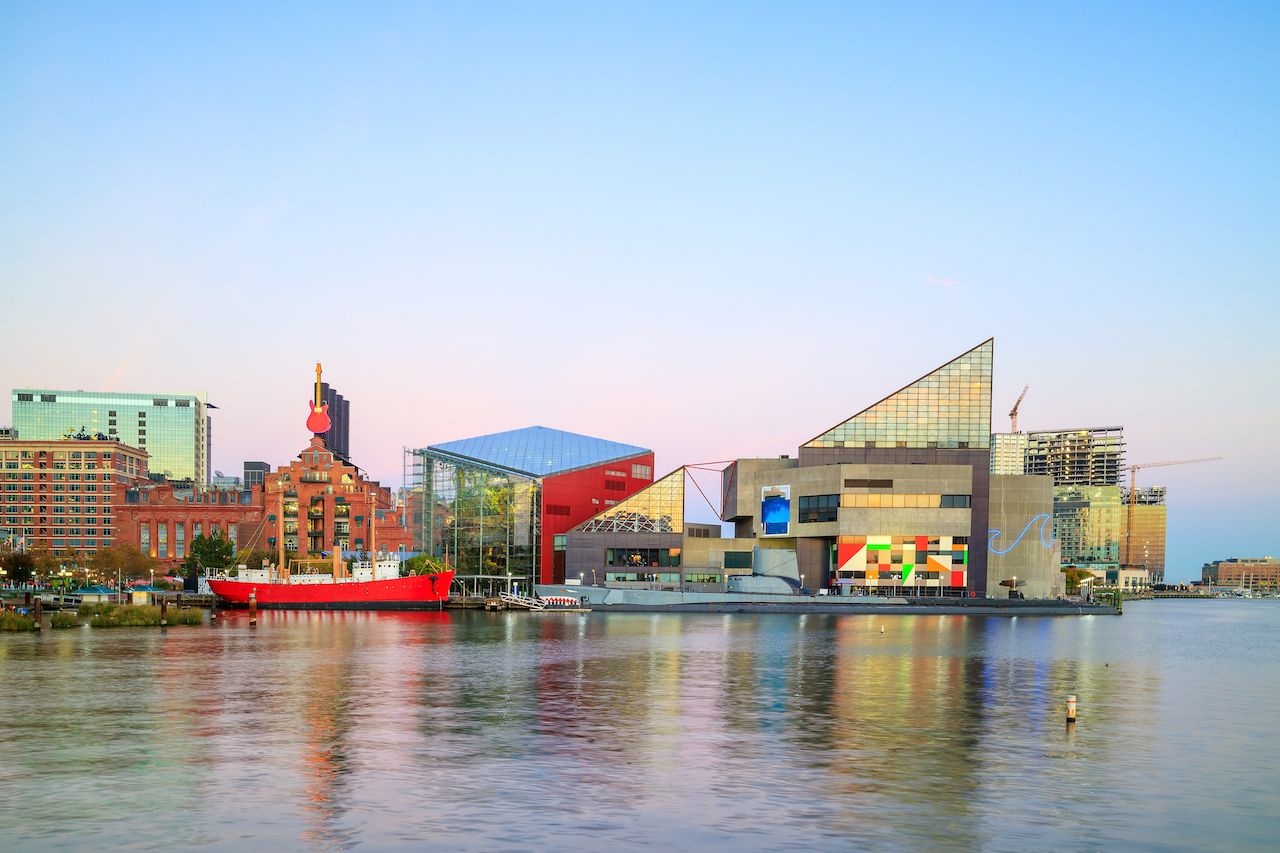 By middle school, we had kiddie discos around Easter to look forward to. At that time, my cousins and I spent our Friday nights making up dance routines (or, as we called it, “rocking off”) to go with Baltimore club music. The FM dial at granny’s house was always turned to 92Q, where DJ K- Swift would play the latest mixes. The songs were often repetitive, with fast beats heavy with percussion that made it impossible to resist dancing. Songs like “Rider Girl,” “Jiggle It,” and “Knuckleheadz” made our tape-recorded playlists every week. By the time the weekend rolled around, we were ready to pull out our synchronized choreography at the local skating rink.

I spent the weekends of my teenage years at a friend’s house plotting which parties we would go to. It usually started with a trip to the mall or a walk around the inner harbor to peep what was happening for the night. We’d usually end up at a house party of a friend of a friend because we were too young to hit the bars. 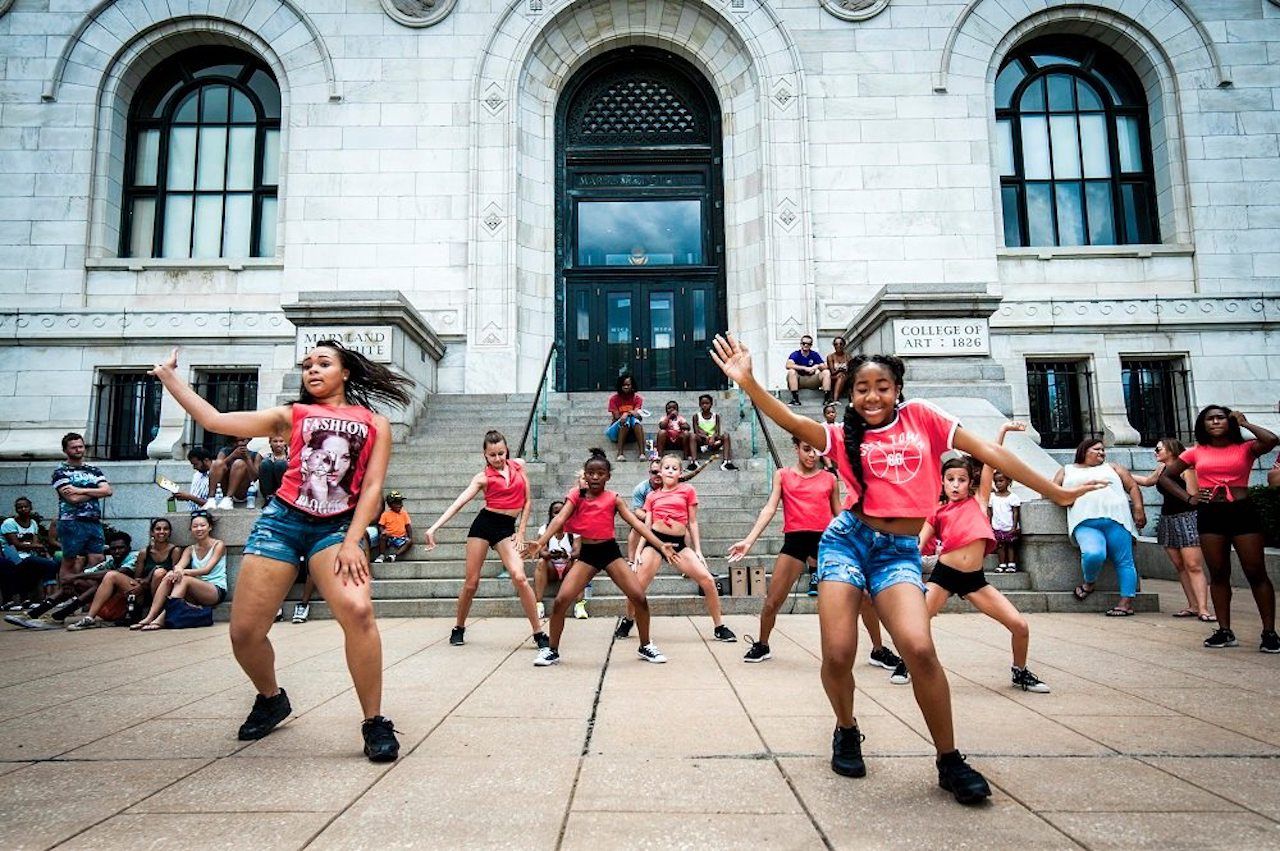 In the summer, we never missed Artscape or the AFRAM festivals. The AFRAM festival was one of my first experiences seeing so many Black people celebrating each other’s existence in such an unapologetic way. Compliments like, “Hey sis, I’m loving your hair,” or “that outfit is everything” were commonplace. Vendors sold kente cloth clothing, accessories, and classic Baltimore foods like crab cakes. It’s always been my favorite time of year in Baltimore.

I spent one of the best summers of my college career as an intern at a youth arts center in Sandtown, where I learned so much about the generation coming up behind me. They were jovial and excited about the summer projects and wanted to beautify the city. I witnessed them going door to door every day to talk to homeowners in the community about their plans to paint the mailboxes around the way. By the end of the season, they’d conceptualized and painted dozens of mailboxes and murals across the city. The powerful murals had important messages of self-love, community, and kindness weaved throughout them. From then on, I knew the future of this city and its people were in good hands. 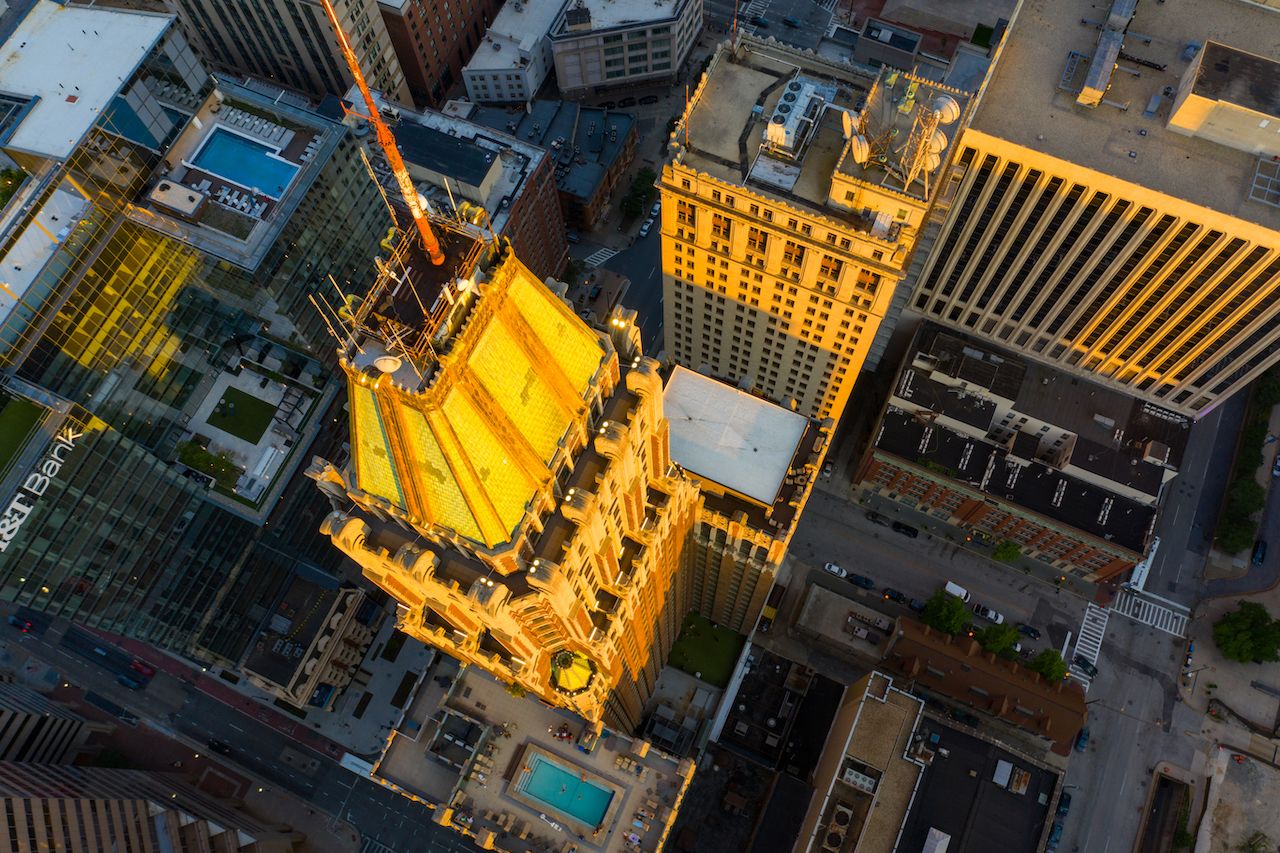 Truth is, Baltimore has always been a special place full of hardworking people who make extraordinary contributions to this city and country. Our city is home to Johns Hopkins, one of the country’s leading hospitals — and where my uncle worked and died. Baltimore is home to a beautiful harbor where Francis Scott Key wrote this country’s treasured national anthem. It’s home to Baltimore Ceasefire, an organization actively working to end gun violence in our city. Many of the country’s top Fortune 1,000 companies like Black & Decker, Legg Mason, and T. Rowe Price call Baltimore home, too. Baltimore gave the world soul and blues with Billie Holiday and Eubie Blake. This city birthed Mario, Mo’Nique, Dru Hill, Gervontae Davis, and Micheal Phelps.

The Baltimore I know is full of artists, entrepreneurs, poets, makers, politicians, authors, community organizers, teachers, and activists. It’s also full of underfunded public schools, police brutality, food deserts, abandoned homes, neglected youth, and homelessness. The latter half of that seem to be the only aspects that ever make the news. 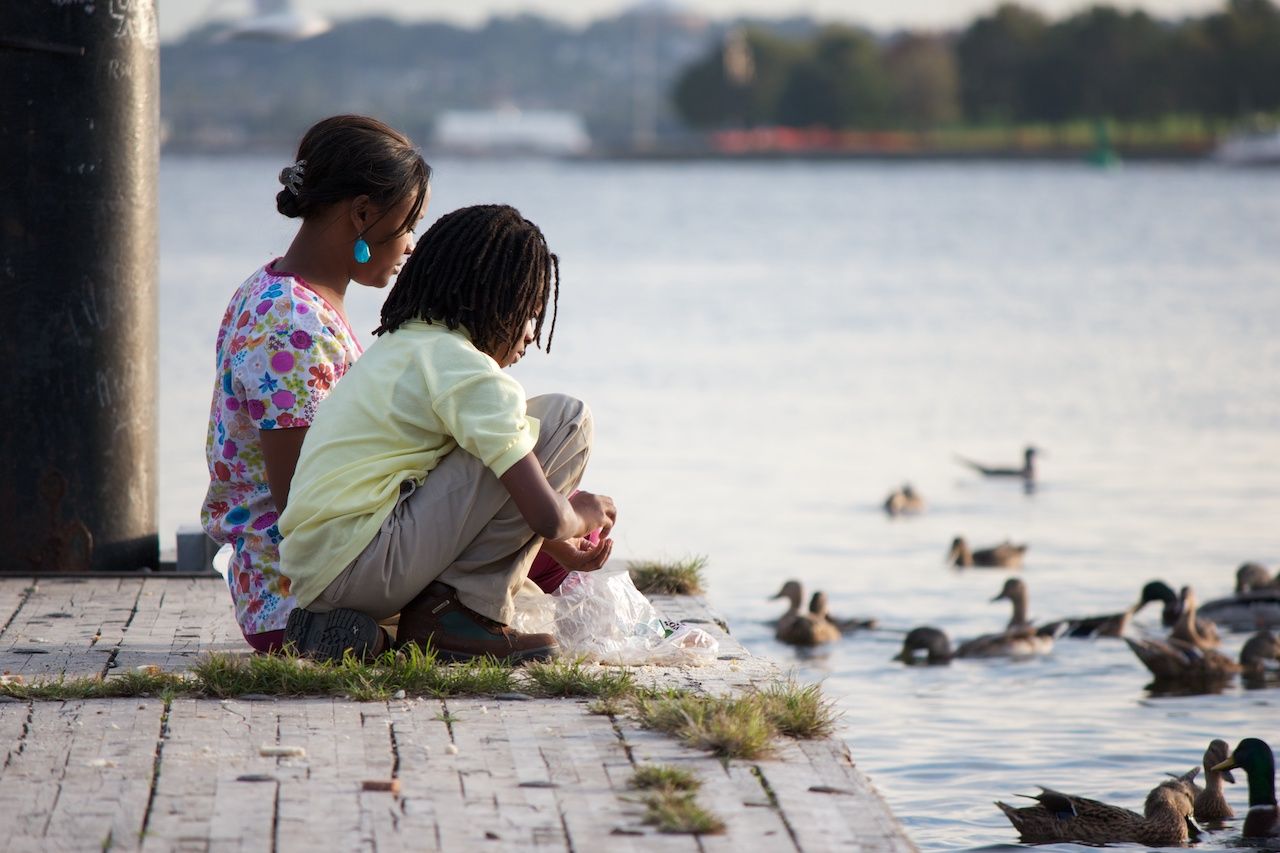 Unfortunately, there are a lot of cities just like Baltimore that are deemed unfit by politicians and the media — too violent and not worthy of being fixed. When President Trump tweets about the city being “disgusting” and that “no human being would want to live there,” he’s not just insulting an entire city beyond moral comprehension — he’s flat out wrong.

People from Baltimore are proud to be from here. People want to live here. Most of my family still lives in Baltimore. They work here, play here, raise families here, and care about the communities in which they live. They’re forever resilient and have electric, undying spirits that make living in Baltimore irreplaceable. After all, they call it Charm City for a reason.

Restaurants + BarsThe 7 Best Black-Owned Restaurants in the DMV
Tagged
Black Travel Narrative
What did you think of this story?
Meh
Good
Awesome

How Two Digital Nomads Founded a Directory for Black-Owned Airbnbs