For most Americans, sauerkraut has a very specific utility: It’s a condiment for hot dogs, sausages, and Reuben sandwiches. But if you hail from Maryland, sauerkraut appears in an unexpected place: the Thanksgiving dinner table. For Baltimore residents in particular, sauerkraut is as much of a must-have holiday side dish as mashed potatoes and gravy.

This sour side dish — made from a simple concoction of cabbage fermented in salt — is tied to the city’s long history of German and Eastern European immigration. In 1863, in the middle of the Civil War, President Abraham Lincoln declared Thanksgiving a national holiday. During this period of unrest in the United States, Baltimore became the “gateway,” for German immigrants, according to The Baltimore Sun, to the point that, “one in four of the city’s residents were transplanted Germans and spoke the tongue as their first language.”

For at least 2,000 years, this pungent dish has been a dietary staple prized for its nutritional properties around the world. The workers who built the Great Wall of China ate it, as did Dutch sailors to prevent scurvy. In the US, thanks to Baltimore’s German newcomers, it transformed from sustenance for laborers to a Thanksgiving tradition. Eager to adopt American customs without abandoning the cuisine of their homeland, they prepared batches of sauerkraut for Thanksgiving dinner. More than 150 years later, Marylandians are still eating sauerkraut with turkey — regardless of each family’s relationship to Baltimore’s history of German immigration. 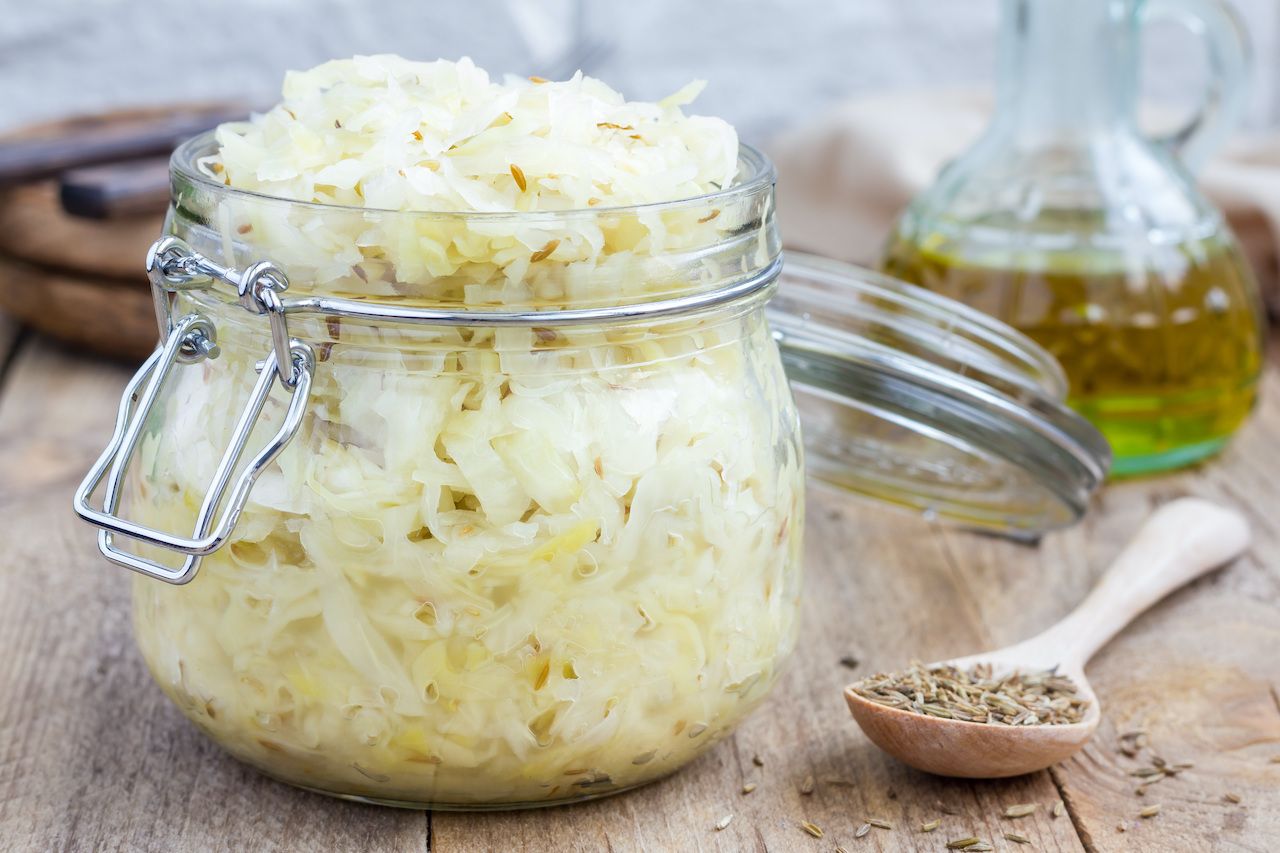 Rachel Rappaport, a Baltimore-based recipe developer and cookbook author, remembers her mother serving Silver Floss canned sauerkraut during the holidays — despite the fact that her family isn’t “particularly German.” The tradition is so entrenched in the lives of Maryland residents of all backgrounds, that Rappaport didn’t even realize it wasn’t a nationwide custom until she got to college.

“We’ve been in Baltimore since the 1800s, living in Pigtown and working for the B&O,” she says. “I went to college locally but I met people there and when we talked about traditions it came up when sharing our favorite dishes. I said we always had it or I liked it with cranberry sauce and people from out of state seemed confused. I thought they were clearly missing out.”

Rappaport tells me that it actually makes sense to have the slightly tangy sauerkraut as an accompaniment to a turkey dinner, because it cuts through the richness of gravy.

Meghan Long, a fundraiser for an environmental nonprofit, grew up in Thurmont, Maryland (though she’s since moved to Oakland). Long tells me sauerkraut was “a staple at the holiday table, particularly Thanksgiving, but sometimes Christmas and Easter as well,” mostly at the request of Long’s grandfather.

Long has close ties with Maryland’s community of German immigrants: Her father’s family has lived in Thurmont since the late 1700s, but she was raised going to her grandfather’s German church, the Graceham Moravian Church, which served sauerkraut as a side at the twice a year turkey and oyster dinners for congregation members. Long recalls that at a young age she learned to stuff an oyster inside a potato roll, then top it with mashed potatoes and sauerkraut.

“I think I knew to associate [sauerkraut] with German immigrants,” Long says, “as being white in the US gives me the privilege of knowing where my ancestors came from. I understood it was connected to our family’s German side and I learned about the migration patterns of German immigrants at a pretty young age.”

Long sent me direct message exchanges with several friends from Maryland who told her that sauerkraut was a constant presence around the holidays in their homes. One friend, named Melanie, wrote that her mother served it on New Year’s with ham and potatoes; she recalls her grandfather telling stories about how his mother made batches of sauerkraut in huge clay pots. “I ate it then, still love it, and it came from my German side of the family,” she said.

A second friend, named Ryan, wrote that he recalls eating sauerkraut during every holiday celebration, including Thanksgiving and Christmas, but he too conceded that, in his family, New Year’s was particularly important when it came to setting the table with sour cabbage: “My grandmother would [freak] out if we didn’t have black eyed peas, sauerkraut, and pork on New Year’s Day.” 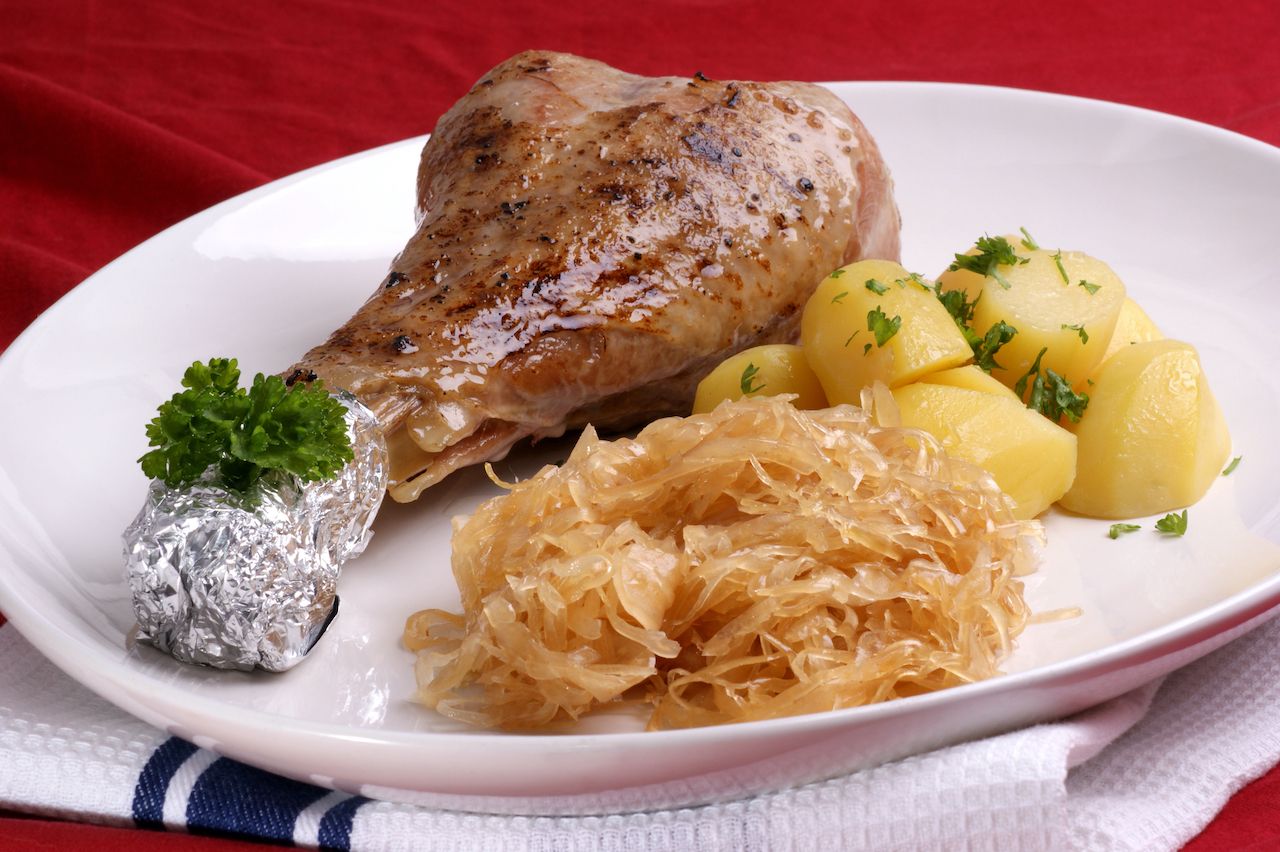 There are even some transplants to Baltimore who have fallen for sauerkraut. Shane and Meaghan Carpenter moved to the city from the Midwest — another region with a large concentration of German immigrants — 15 years ago, and now provide batches of the sour cabbage to their eager fellow residents at their company, Hex Ferments.

“Meaghan grew up making sauerkraut with her Grandmother and pickles with her parents,” the pair wrote me in an email. “We knew that Sauerkraut was an imperative addition to our offerings, the trick was to get the aging process down so that my Grandmother would not haunt me.”

The Carpenters didn’t realize that sauerkraut was a holiday tradition in Maryland until they opened their shop in 2013 — a discovery they now call “serendipitous.” Today, their Thanksgiving dinner isn’t complete without a batch of sauerkraut.

“Thanksgiving is…the only time of the year when we cook our sauerkraut,” Meaghan wrote, “which we start first thing in the morning in a small crock-pot or saucepan and it simmers all day until it’s time to eat. Our version is different than my Grandmothers, who fed her sauerkraut sips of vodka all day.”

Sauerkraut is as versatile as it is deeply rooted in American traditions of immigration. Maybe your ancestors immigrated to Baltimore from Germany or your family adopted the tradition because fermented cabbage works surprisingly well with the buttery richness of mashed potatoes, gravy, and turkey. Maybe you can’t eat a hot dog without it, or you grew up using it as a topping for oysters. There are so many ways to fall in love with fermented cabbage, but we can be certain of one thing: Sauerkraut has certainly earned its place in the pantheon of American Thanksgiving side dishes.

Food + DrinkThe Midwest Is the Home of the Casserole. These Are the Ones To Try
Tagged
Food + Drink Holidays
What did you think of this story?
Meh
Good
Awesome